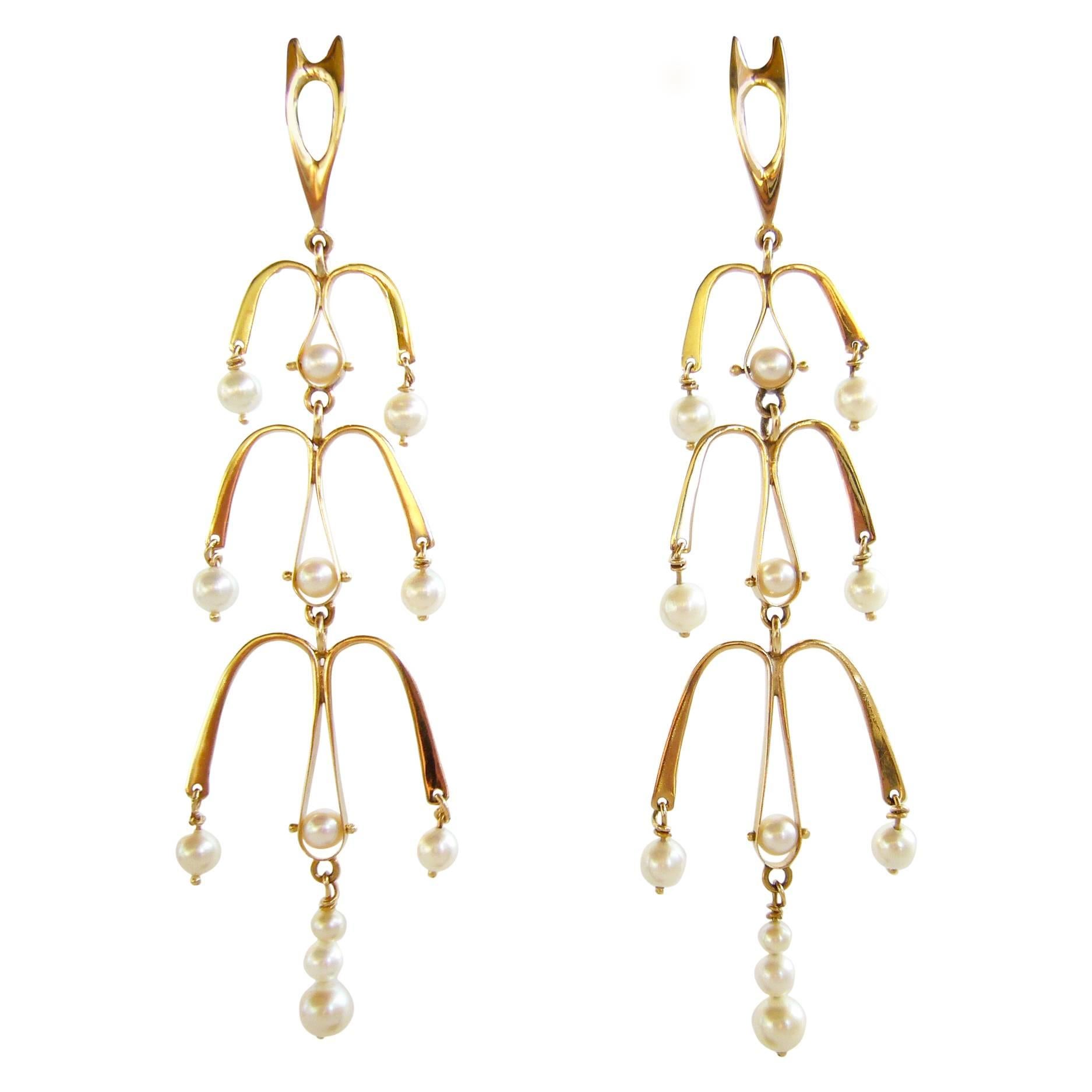 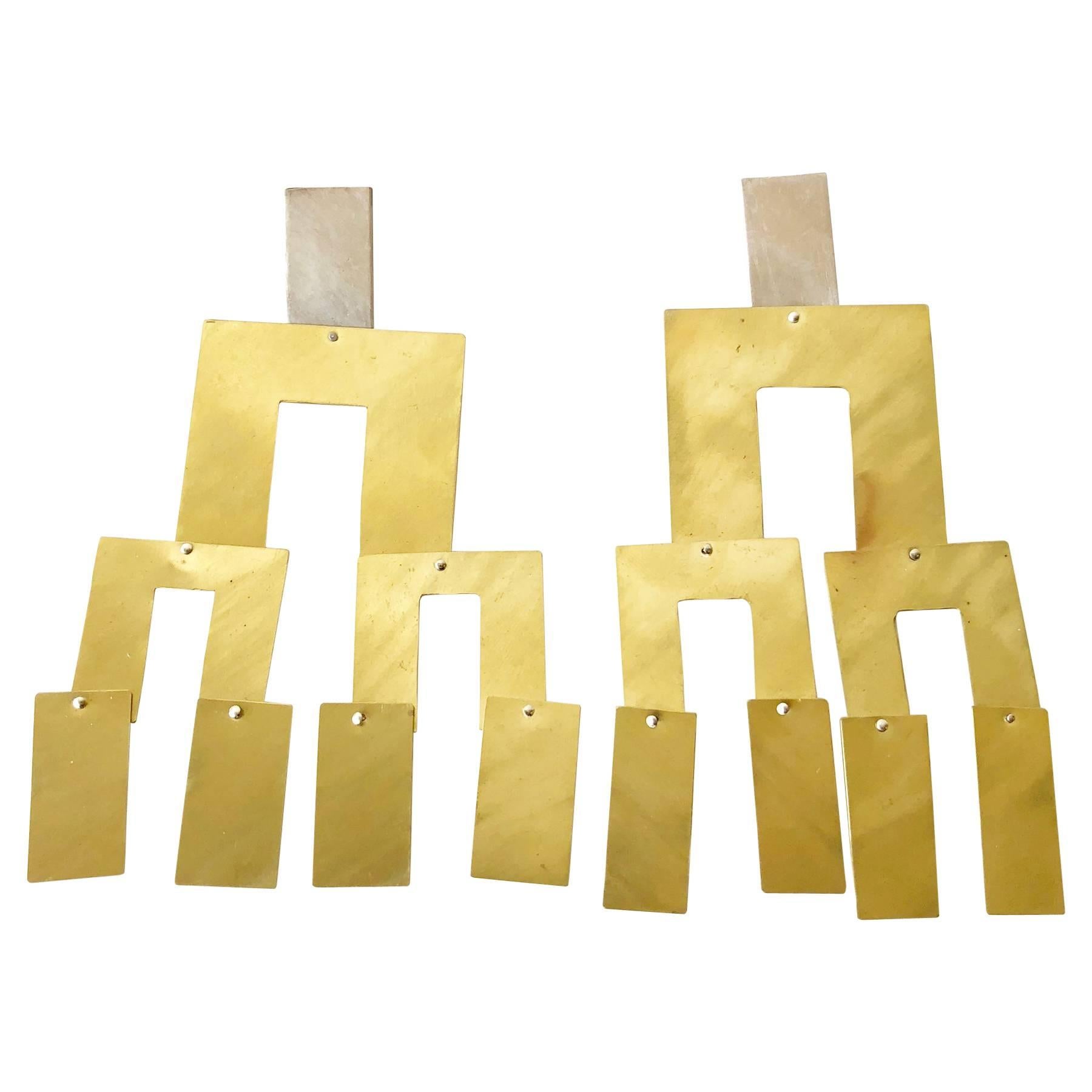 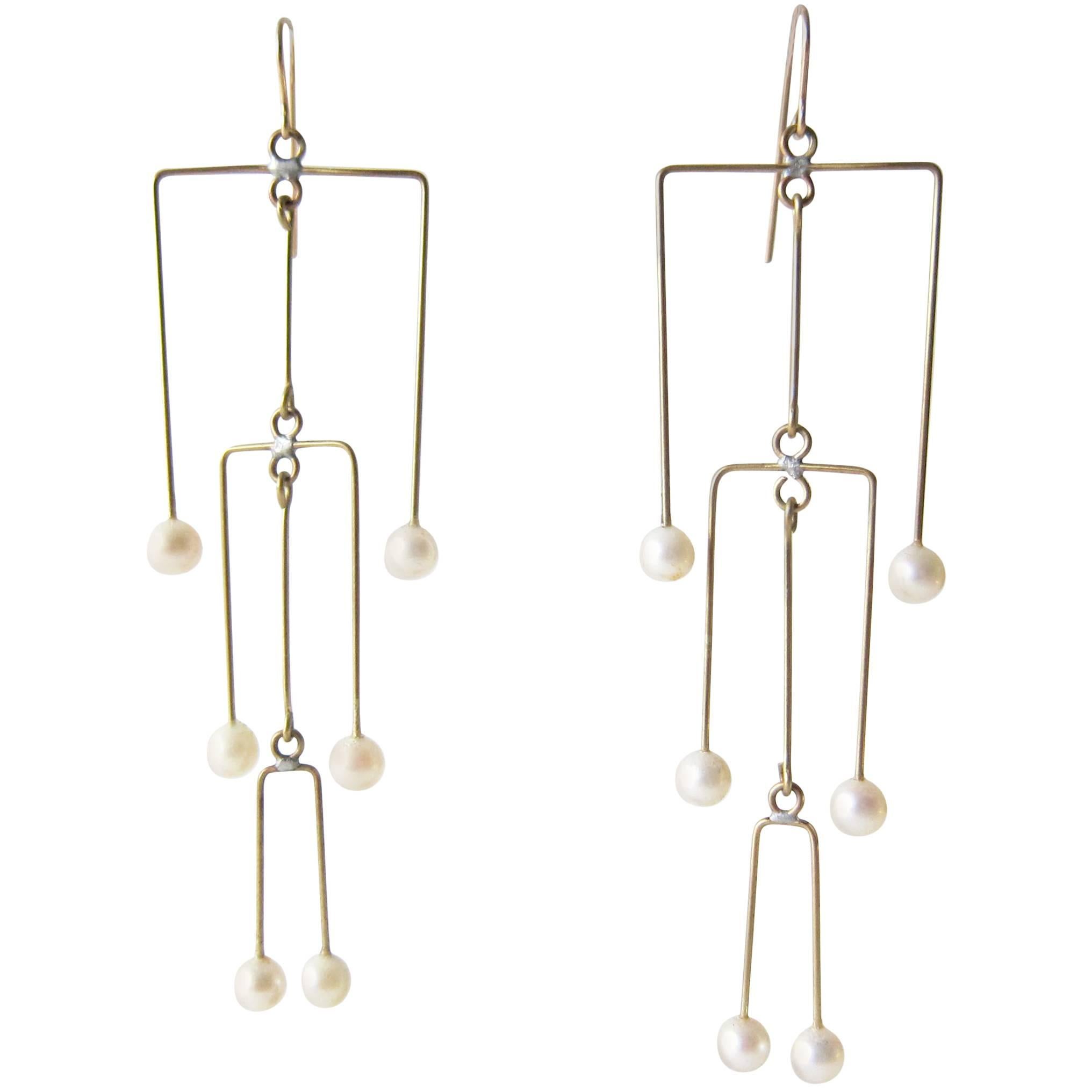 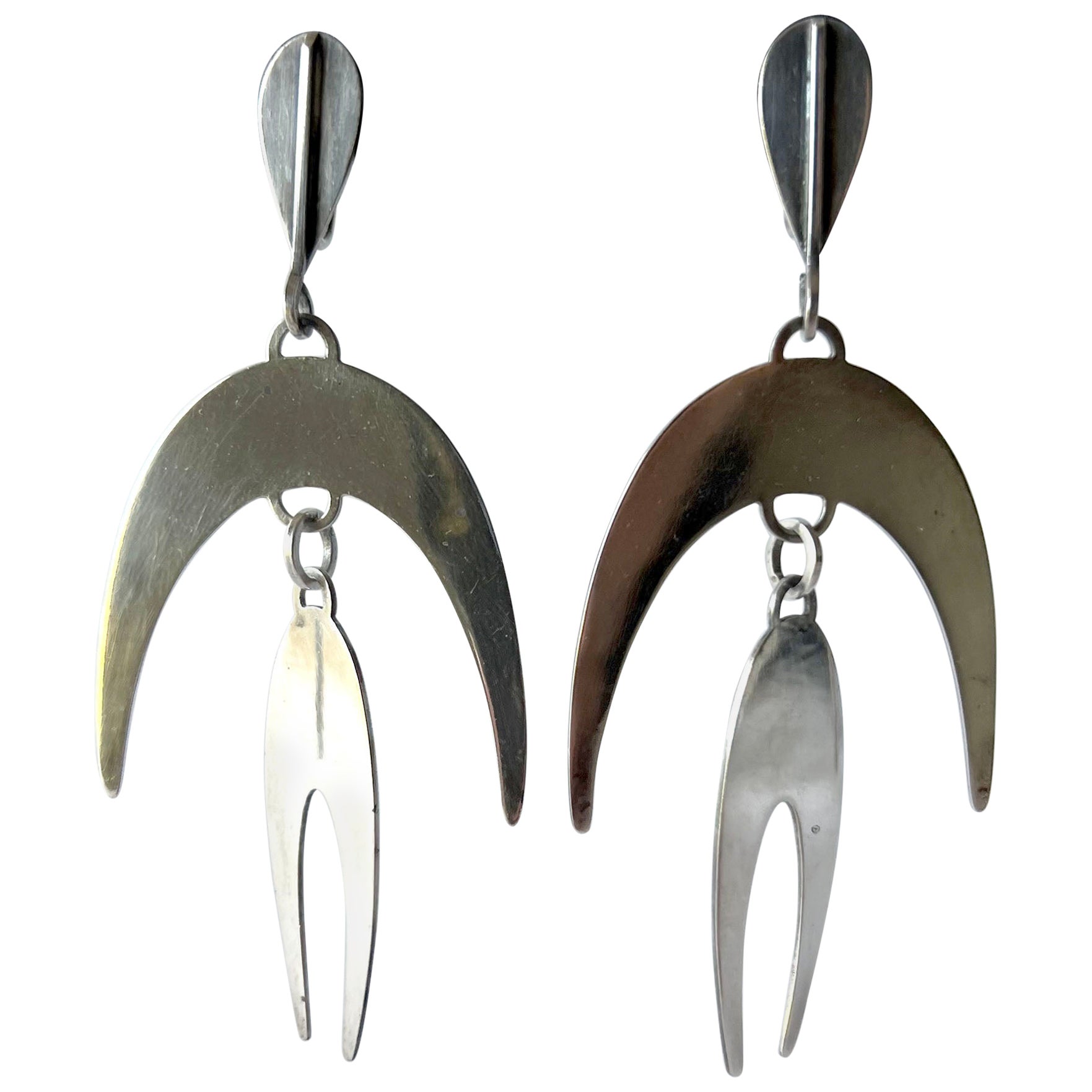 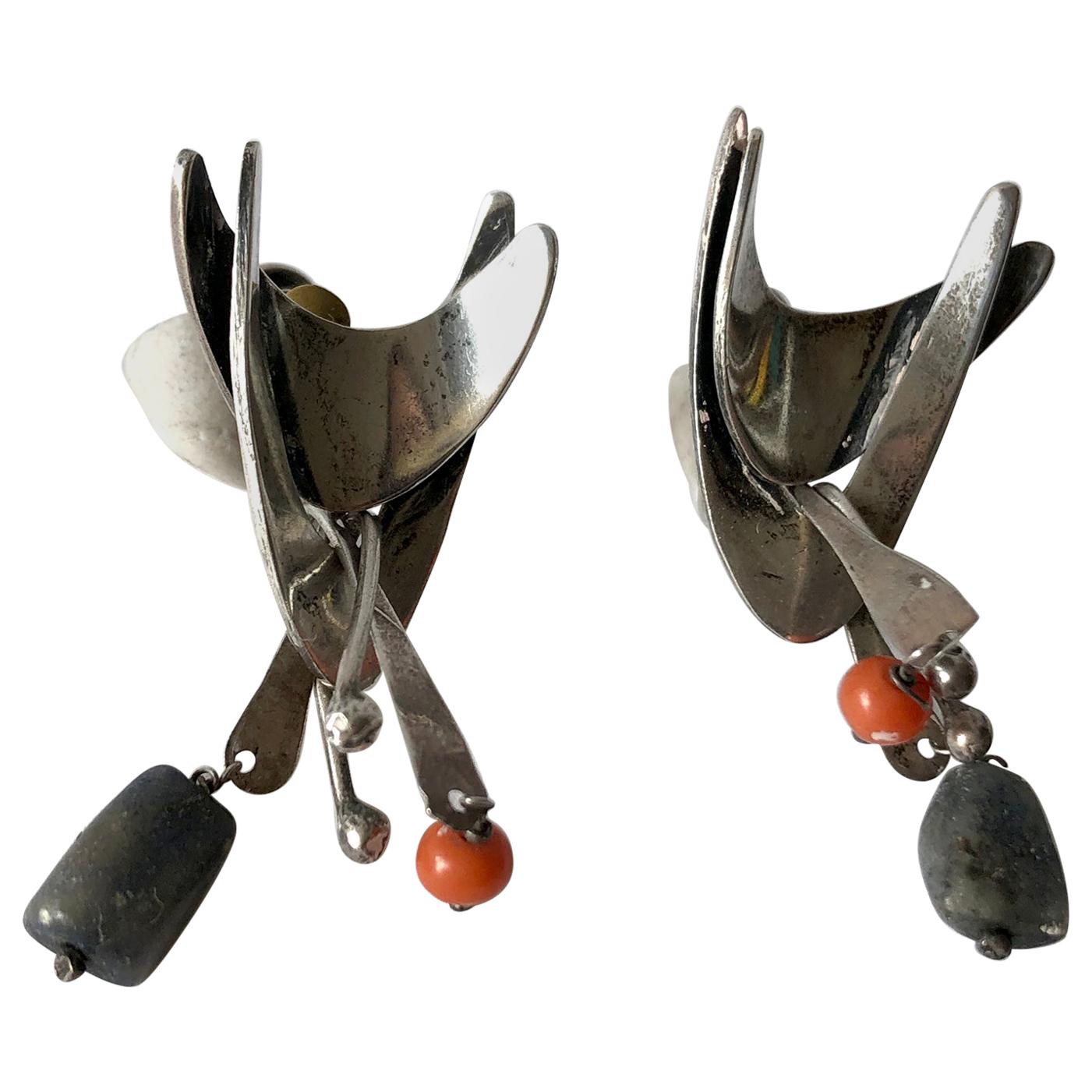 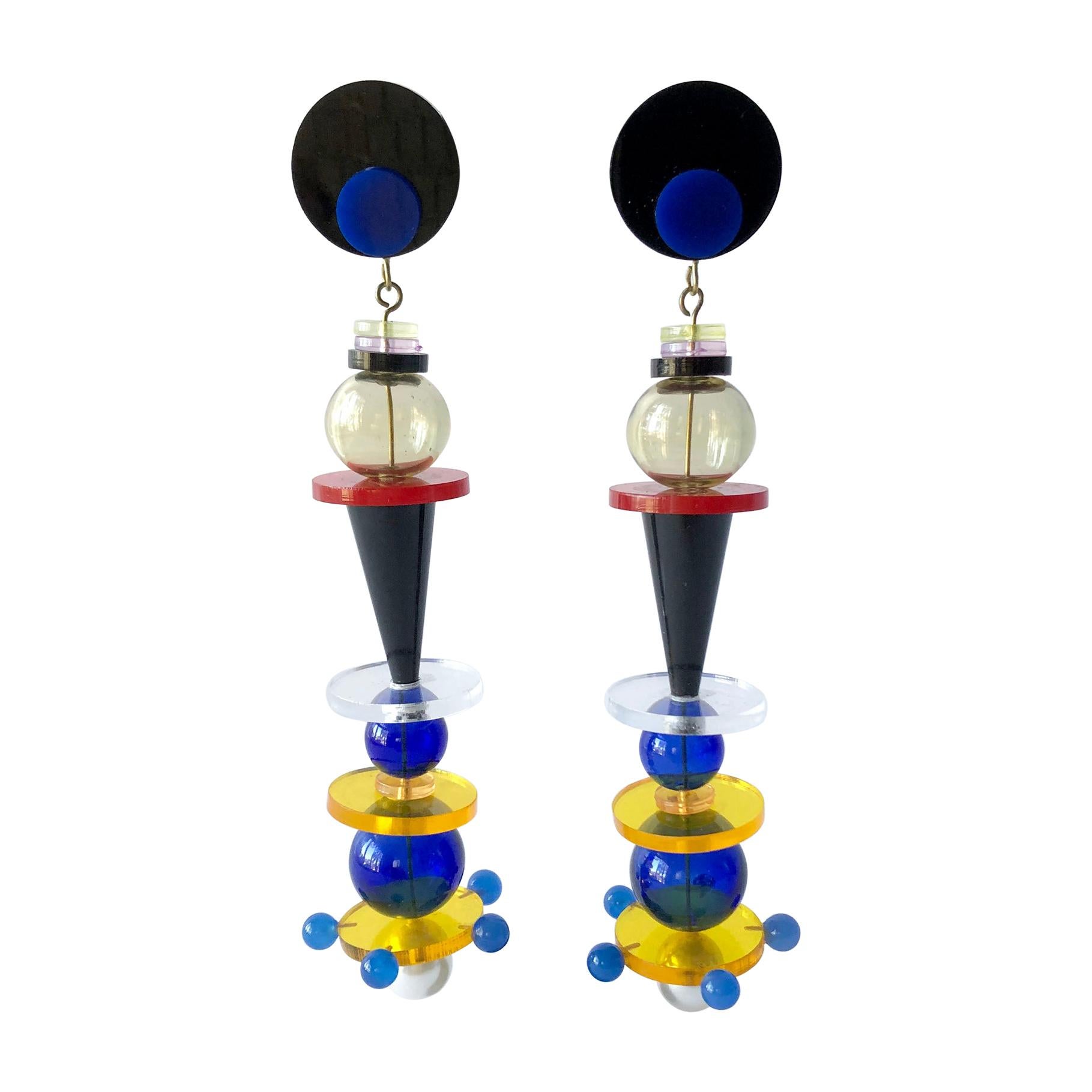 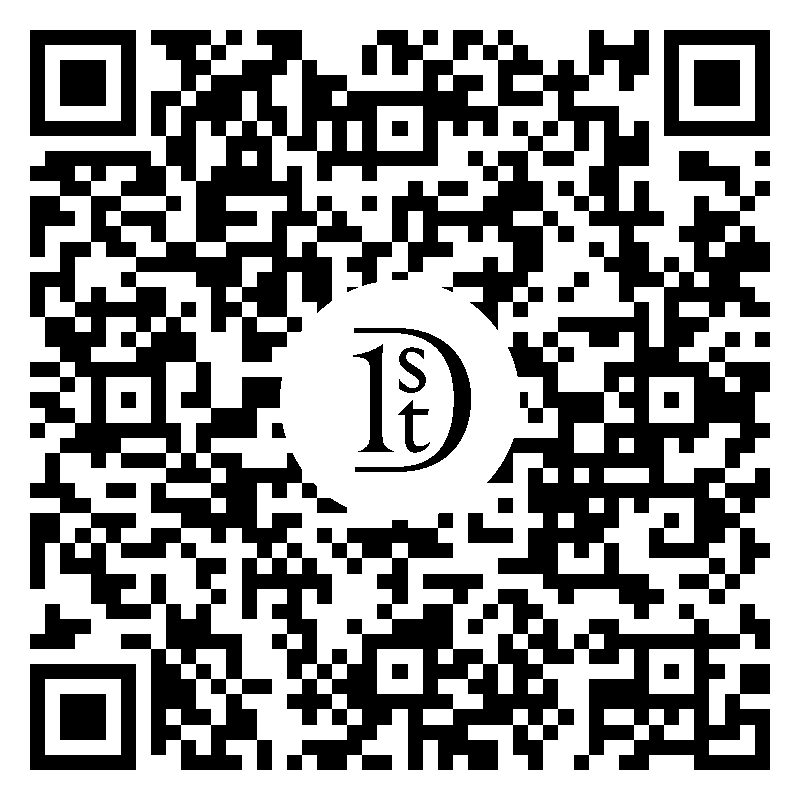 1950s dangling kinetic leaf earrings created by Art Smith of New York City, New York. Earrings measure 3" in length and are of the screw back variety. Signed art Smith on the back of one earring, Art Smith. In very good vintage 1950s condition. Born in Cuba in 1917, the Smith family moved to Brooklyn, NY shortly afterward and settled in Brooklyn, NY. Arthur showed his artistic talent from a young age, and participated in various art contests. He received a scholarship to Cooper Union for the Advancement of Science and Art. After graduating in 1940, he attended jewelry making classes at New York University. Knowledge of the jewelry business and the friendship with Winifred Mason, identified the future of Smith. He opened his first shop in Greenwich Village in 1946, later at 140 West Fourth Street, New York, which was the start of his career. Smith opened stores around the U.S., Boston, San Francisco, Chicago, and by the mid 1950’s he was able to establish business relationships with famous companies namely, Bloomingdale’s, Milton Heffing in Manhattan, James Boutique in Houston, L’Unique in Minneapolis, and Black Tulip in Dallas. Also, he received coverage in Vogue, Harper’s Bazzar and mentioned in The New Yorker. In 1969 he had a one-man exhibition at New York’s Museum of Contemporary Crafts (now the Museum of Art and Design). Besides, in 1970 he participated in Objects: USA, a large traveling exhibition. Organized by Lee Nordness, an influential early dealer in craft objects. After his death, three major exhibits celebrated his work. Among them “Arthur Smith, A Jeweler’s Retrospective” at the Jamacia Arts Center in Queens NY in 1990. Also, “Sculpture to Wear, Art Smith and his Contemporaries” at the Gansevoort Gallery, NYC, 1998. Also, “From the Village to Vogue” at the Brooklyn Museum in 2008. Smith had had a heart attack in the 1960s, and by the late 1970s his health had declined. The shop on West Fourth was closed in 1979. Smith died in 1982. 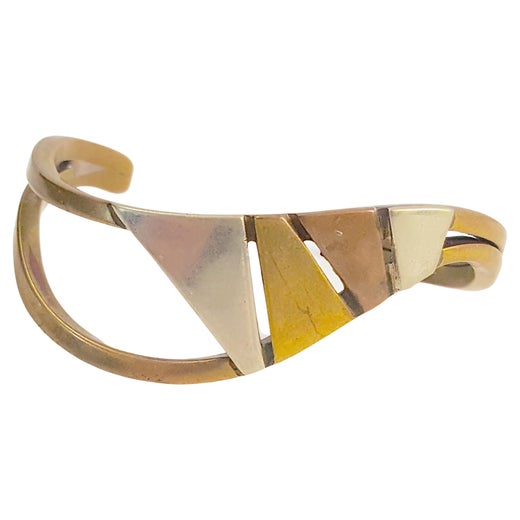 Fusing eclectic influences such as Surrealism and African art, Art Smith was a leading mid-century modernist jeweler and one of the few African American designers to break into the field. His oversize geometric pieces with their innovative use of wire, silver forms, brass, aluminum, stone and glass elements were boldly sculptural yet lightweight, becoming popular in the 1940s and ’50s as expressive statements of adornment.

Born in Cuba to Jamaican parents, Smith moved as a child to Brooklyn, New York, in 1920. After showing an early aptitude for art, he earned a scholarship to study at the Cooper Union for the Advancement of Science and Art in Manhattan. He was especially inspired by the pioneering African American jeweler Winifred Mason, who hired Smith to work at her studio. There he witnessed how she engaged with West Indian folk art through bronze and copper.

After graduating, Smith opened his first shop in 1946 on Cornelia Street in Greenwich Village. Facing discrimination in the predominantly Italian area, he relocated to West Fourth Street where he would work until 1979. Smith developed relationships with stores like Bloomingdale’s as well as New York City’s vibrant Black cultural scene, from which his clients included Lena Horne and Duke Ellington. He also designed work for avant-garde Black dance companies such as those led by choreographers Talley Beatty and Pearl Primus and a brooch for Eleanor Roosevelt.

“The body is a component in design just as air and space are,” Smith once stated. Employing biomorphic shapes, he created works such as the Patina necklace that referenced Alexander Calder’s mobiles with its dangling silver cutouts as well as the Lava bracelet involving two layers of metal that undulate around the wrist.

Smith often used unconventional materials for fine jewelry that made it affordable to people beyond the elite, and he was a vocal advocate for Black and gay civil rights. In 2008, the Brooklyn Museum opened a retrospective of his work. His jewelry is included in the collections of major museums such as the National Museum of African American History and Culture, the Cooper Hewitt, Smithsonian Design Museum and the Museum of Fine Arts, Boston.

Find a collection of Art Smith jewelry on 1stDibs.

1stDibs Buyer Protection Guaranteed
If your item arrives not as described, we’ll work with you and the seller to make it right. Learn More
About the Seller
5.0
Located in Los Angeles, CA
Platinum Seller
These expertly vetted sellers are 1stDibs' most experienced sellers and are rated highest by our customers.
Established in 2000
1stDibs seller since 2012
420 sales on 1stDibs
Typical response time: <1 hour
More From This SellerView All
People Also Browsed
You May Also Like
Featured in PrideView All