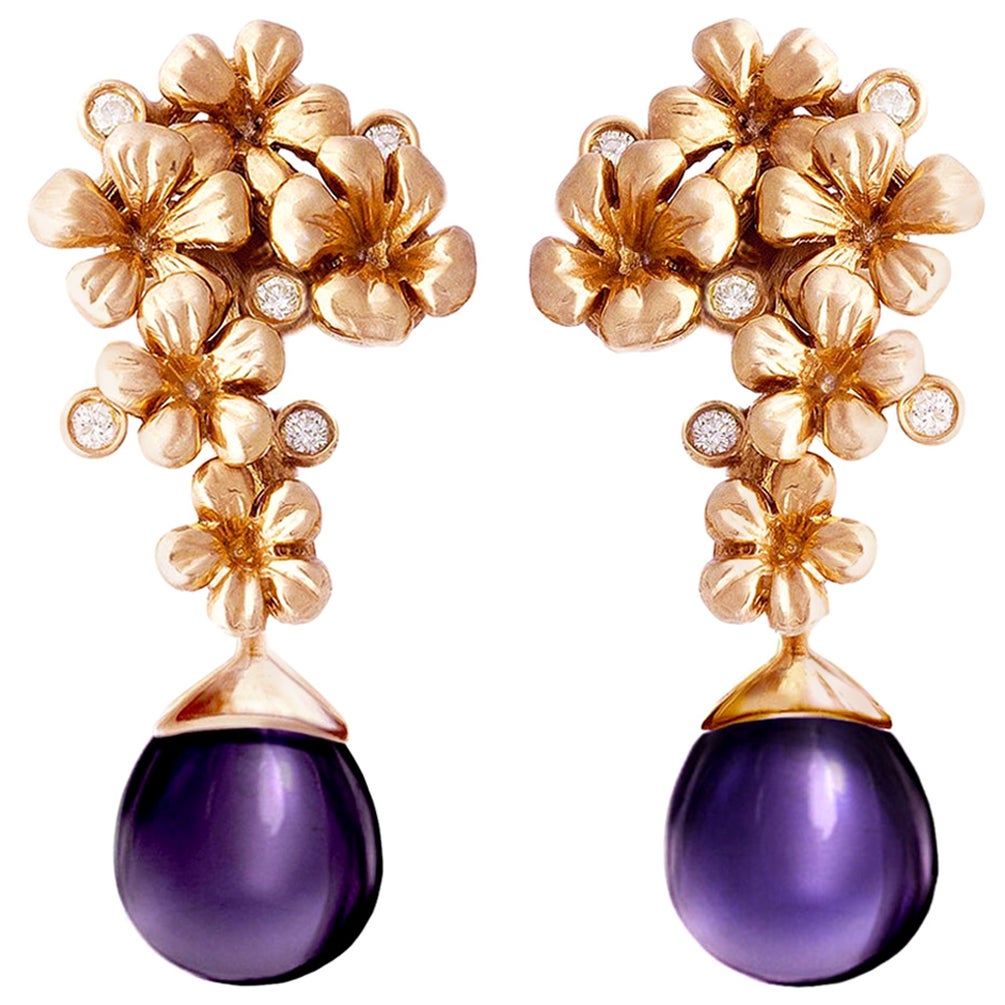 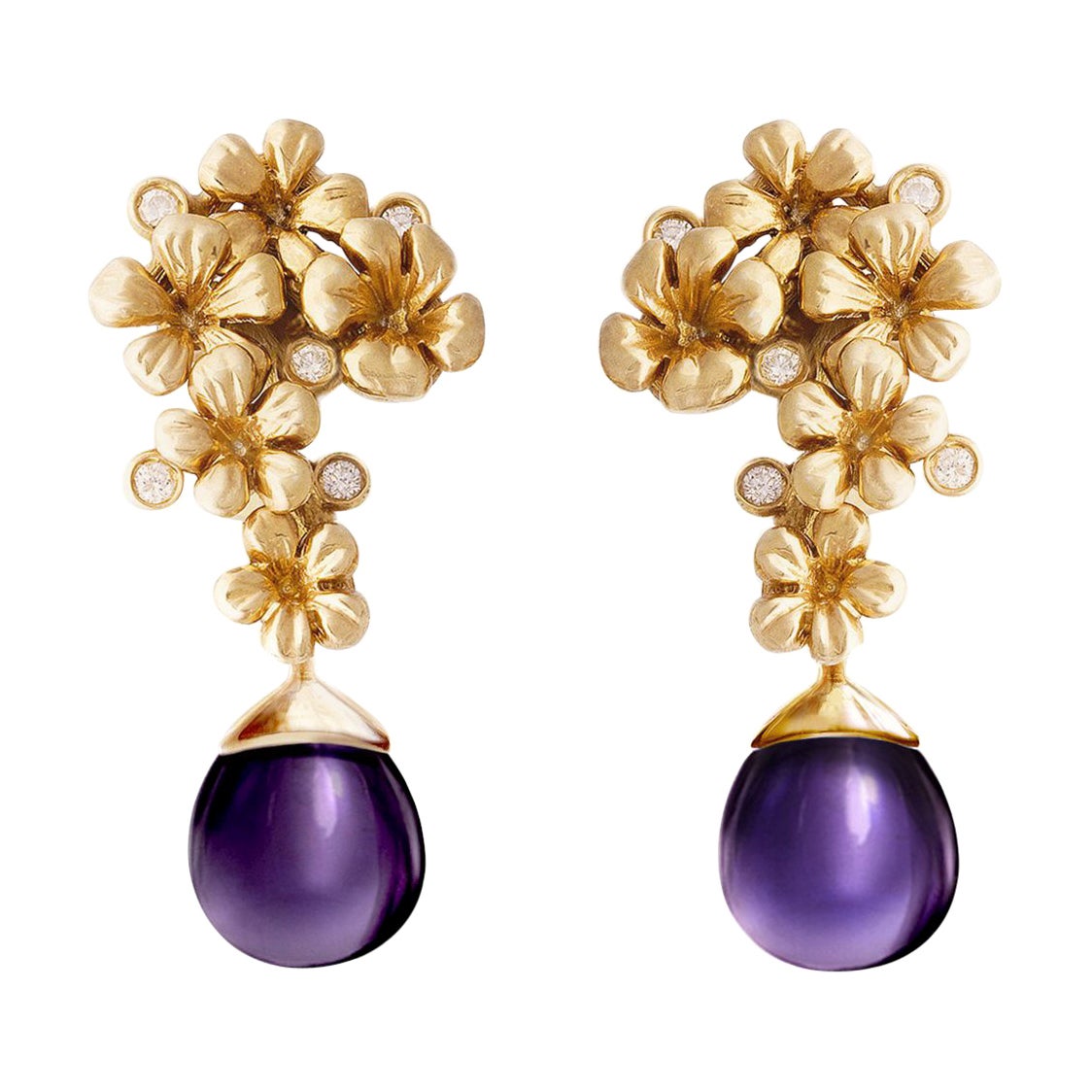 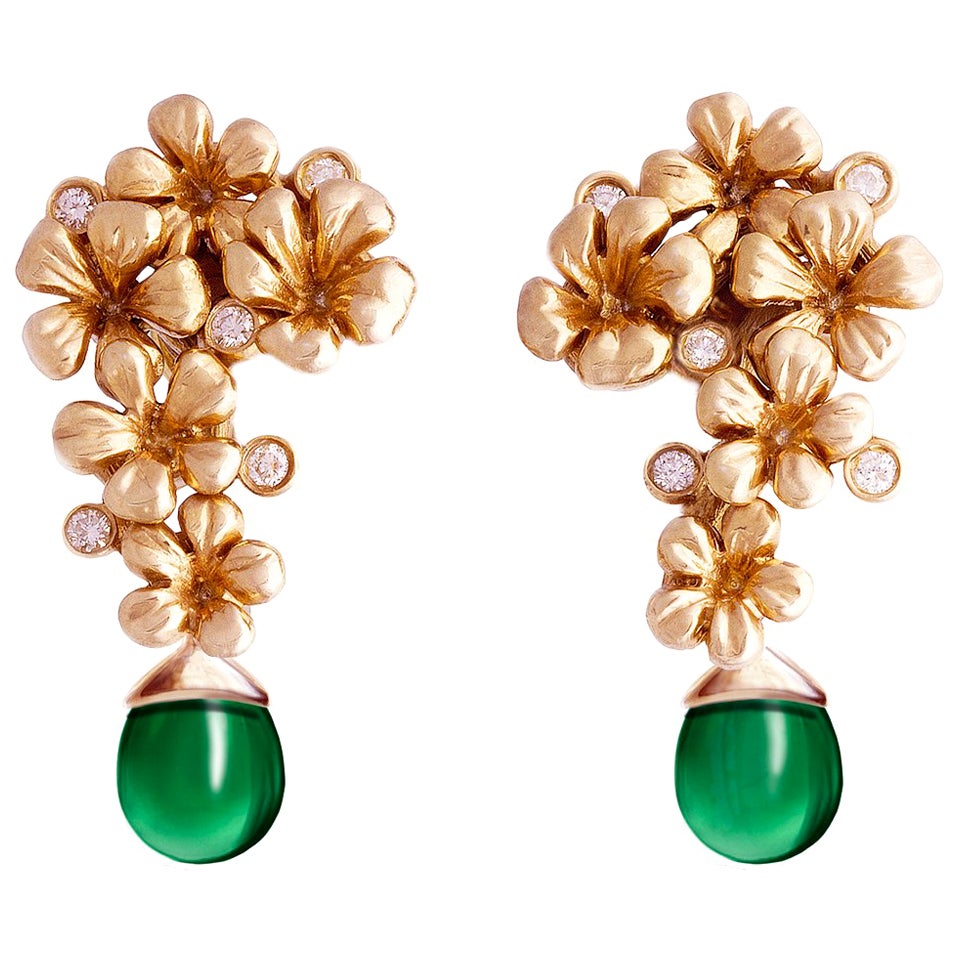 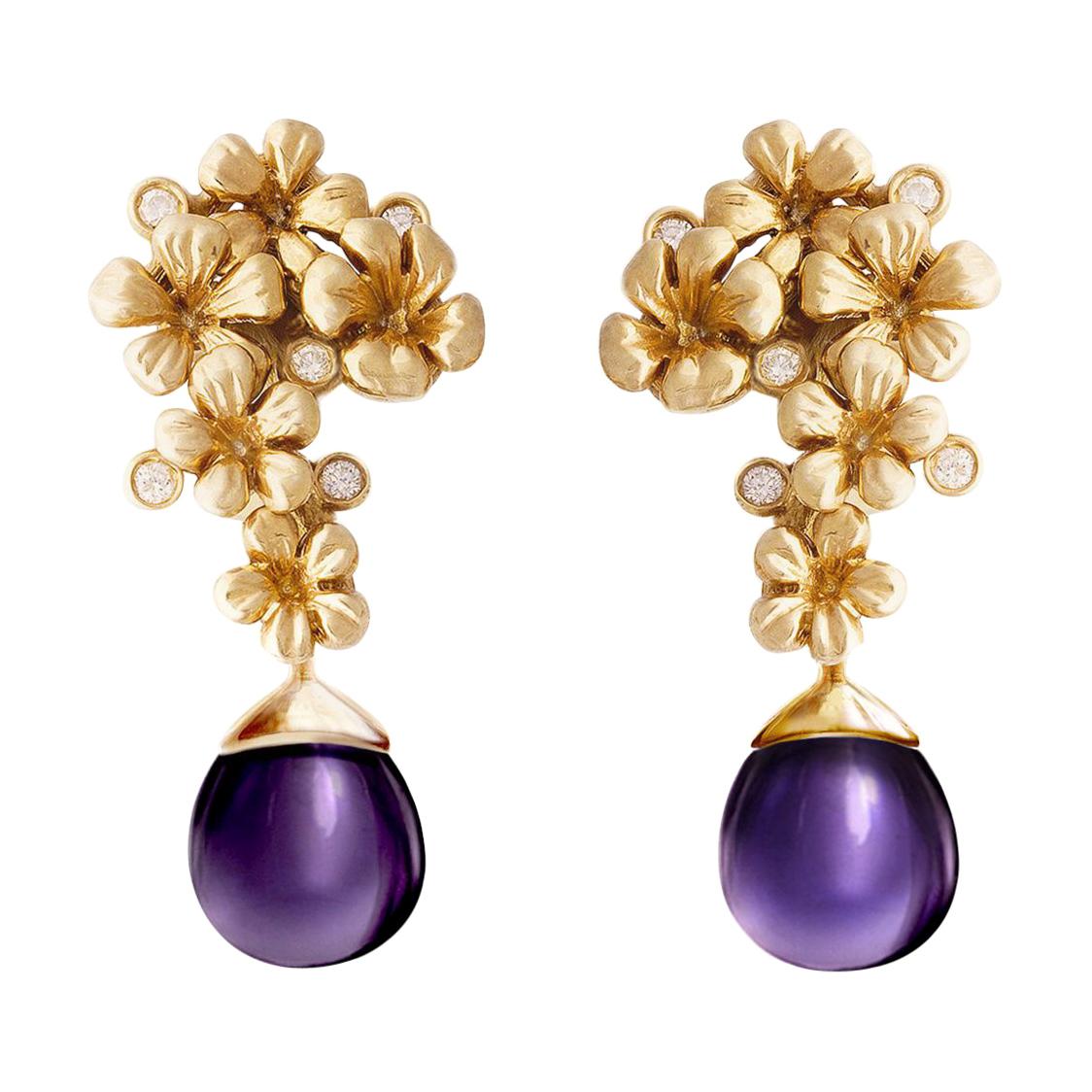 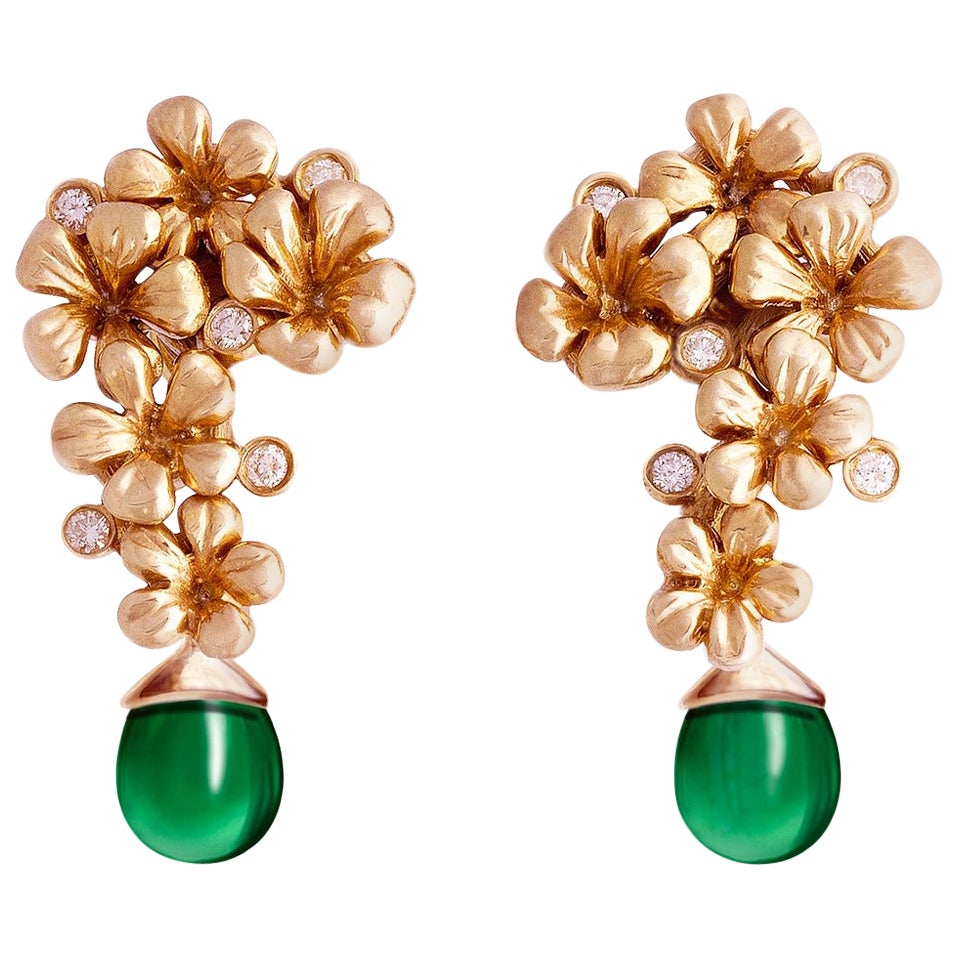 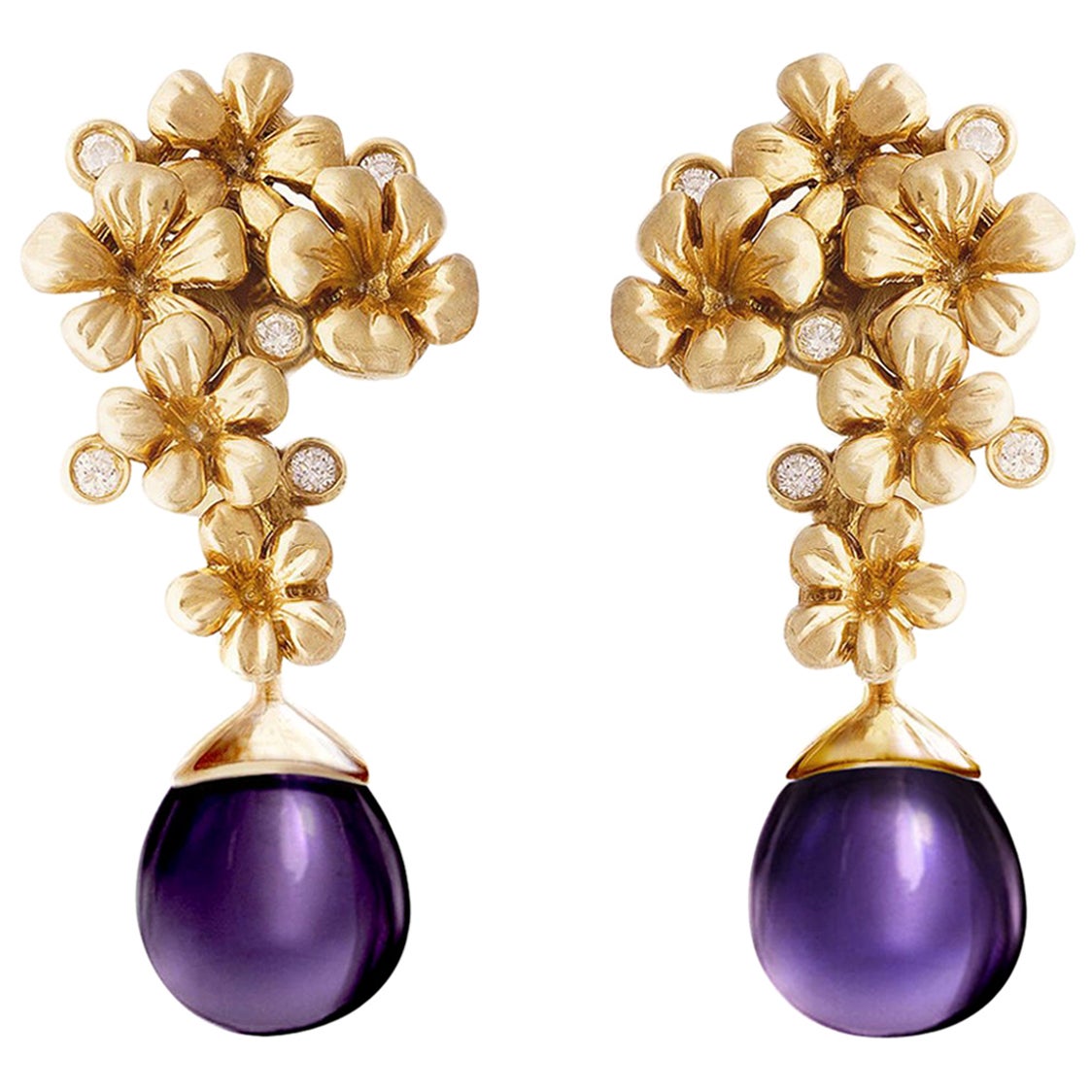 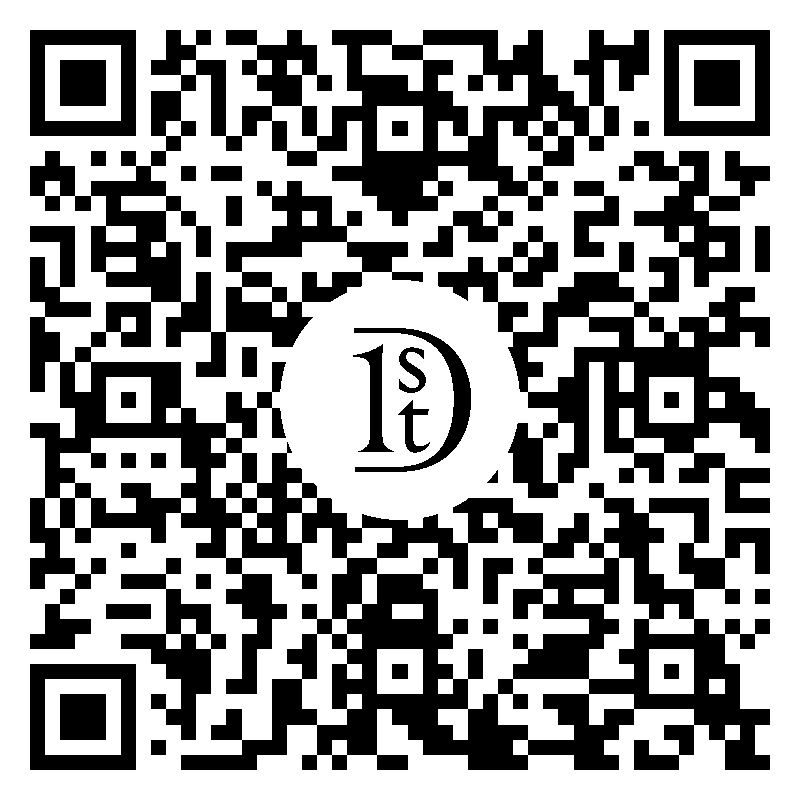 Plum Blossom cocktail earrings are in 18 Karat rose gold. They are encrusted with 10 round diamonds and deep colour perfectly polished amethysts cabochon drops (about 20 Carat), which can be taken off and on. We use top natural diamonds VS, F-G, we work with german gems company, that in the market since 19th century. This jewellery collection was featured in Vogue UA, designed by the oil painter from Berlin, Polya Medvedeva. The earrings fit best to classic, dramatic, romantic and natural faces by Kibbe test. The sculptural design adds the extra highlights to the surface of the gold. The purple amethysts fit the best to the rose gold. The diamonds add the delicate blinks, and the cabochon drops are as open for the light as the gems possibly can be. The drops can be exchanged for another semi-precious or precious gem drops. These earrings are custom hand made. You can contact the artist to order them in white or yellow gold, you can also order the pair as a clip-on earrings. This is a limited edition jewellery collection. The plum blossom symbolises the energy of life, as these trees are blooming in the end of winter. These flowers composition reflects the modern style.

Polya Medvedeva launched her contemporary jewellery line in 2010, she is an oil and ink painter from Berlin. Her inspiration takes it’s roots from the aesthetics theories of such theoretics as Xie He (China, 5th century). The designer jewellery combines accurate ethical work by professional fine jewellers in Germany (from newest technologies to founded in the 19th century) and new sculptural ideas by the artist. Polya's pieces are regularly featured in Vogue UA, Harper’s Bazaar UA, Another magazine UK and the other magazines. One of the connoisseurs of Polya’s artwork is the German actress Anne Ratte-Polle, who chose the jewellery for the 64th Berlinale Film Festival. For ten years Polya showcases her jewellery in boutique Atelier1, which first international foray was a corner in Dover street market (London). Artist discovered a unique way to encrust colourful gems, hid the diamonds, sapphires, spinels, tanzanites, emeralds, pearls, rubies, amethysts, and garnets between the filigreed flower's ornaments of gold, fig fruits shapes or twigs of Chinese peonies. 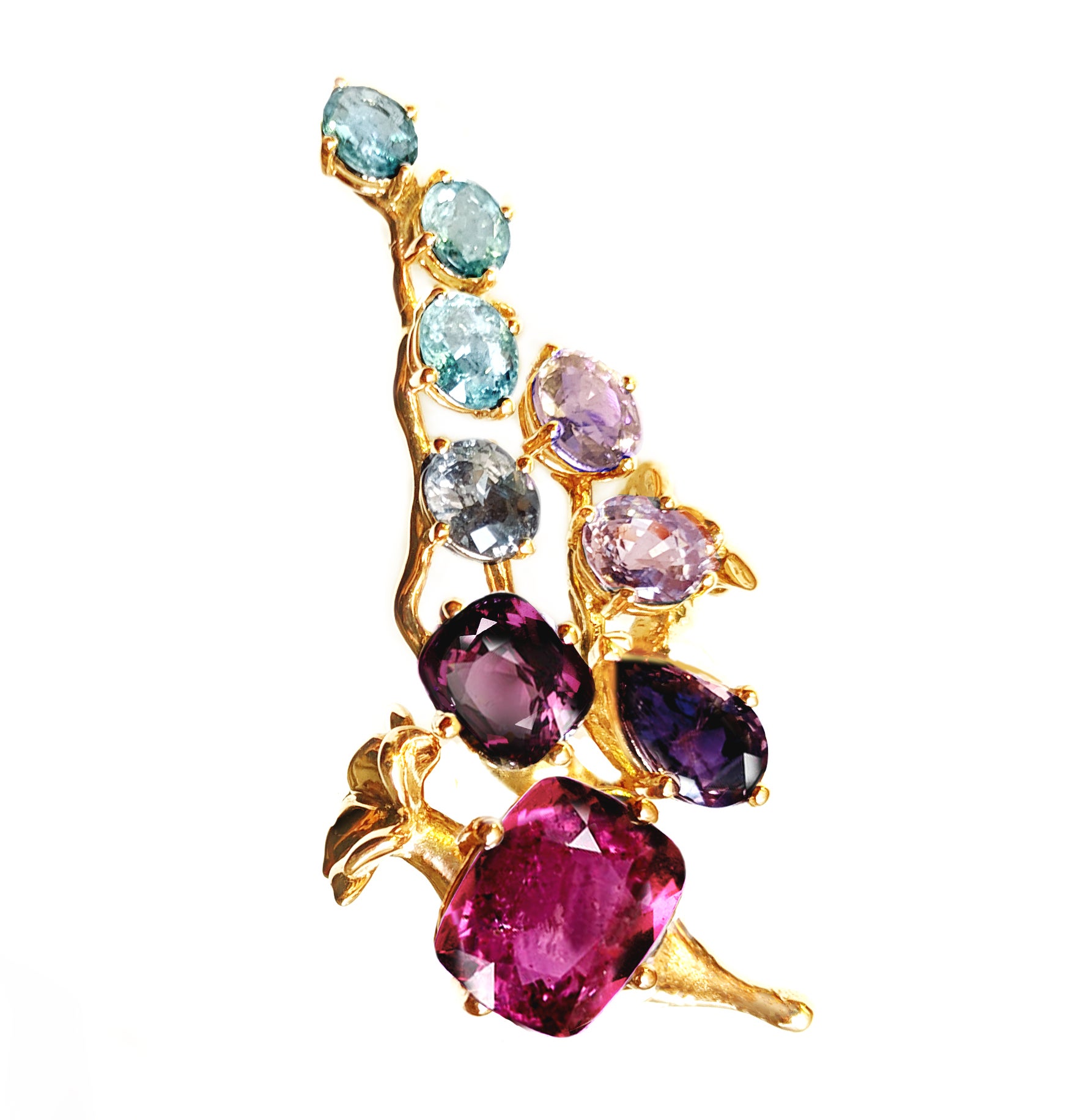 About the Seller
4.9 / 5
Located in Berlin, Germany
Vetted Seller
These experienced sellers undergo a comprehensive evaluation by our team of in-house experts.
Established in 2010
1stDibs seller since 2018
44 sales on 1stDibs
Typical response time: 1 hour
More From This Seller

$9,000 / item
Free Shipping
18 Karat White and Rose Gold with Tanzanite and White Diamonds Earrings
Located in GALLARATE, IT
A flower just bloomed ! Inspired by the beauty of nature, very unique Earrings made in Italy by Stanoppi Jewellery since 1948. Earrings in 18k white and rose gold with Tanzanite (ro...
Category

$21,500
Free Shipping
18 Karat Rose Gold with Lemon Quartz and Prasiolite Earrings
Located in GALLARATE, IT
Fashion earrings nice design. We love to transfer our passion to make you happy! Made in Italy by Stanoppi Jewellery since 1948. Earrings in 18k rose gold with Lemon Quartz (rectang...
Category

$2,067
Free Shipping
18kt Rose Gold with Sapphire and White Diamonds Earring
Located in GALLARATE, IT
Fashion earrings for any occasion , inspired by nature, a flower that lights up your face. The design is very accurate and unique. Our mission is to combine colorful stones and uniqu...
Category