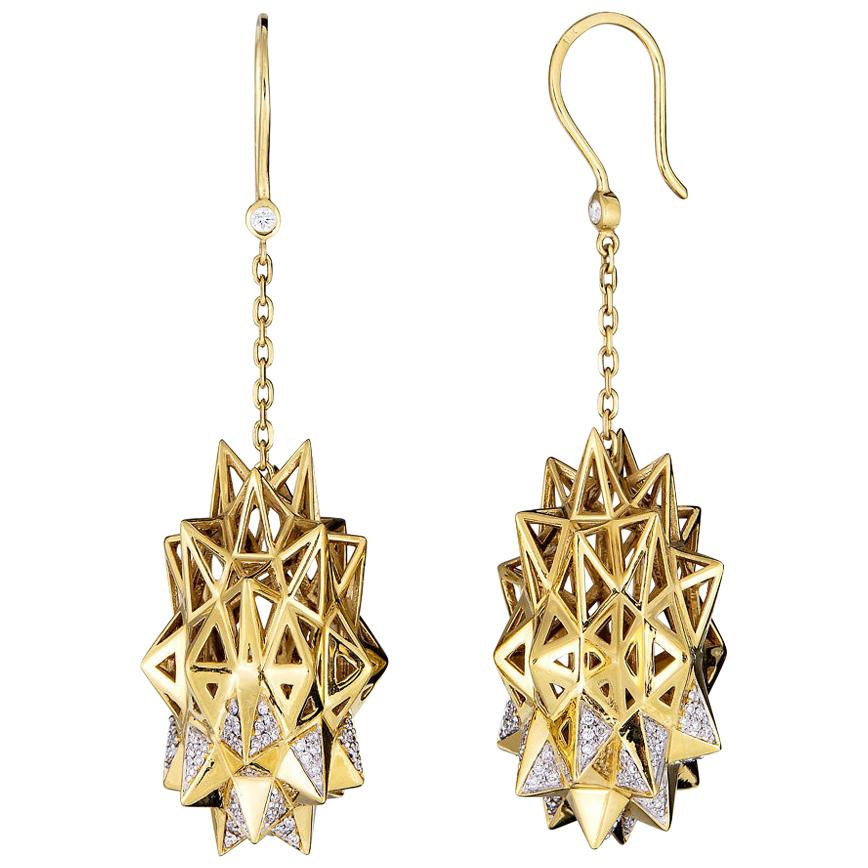 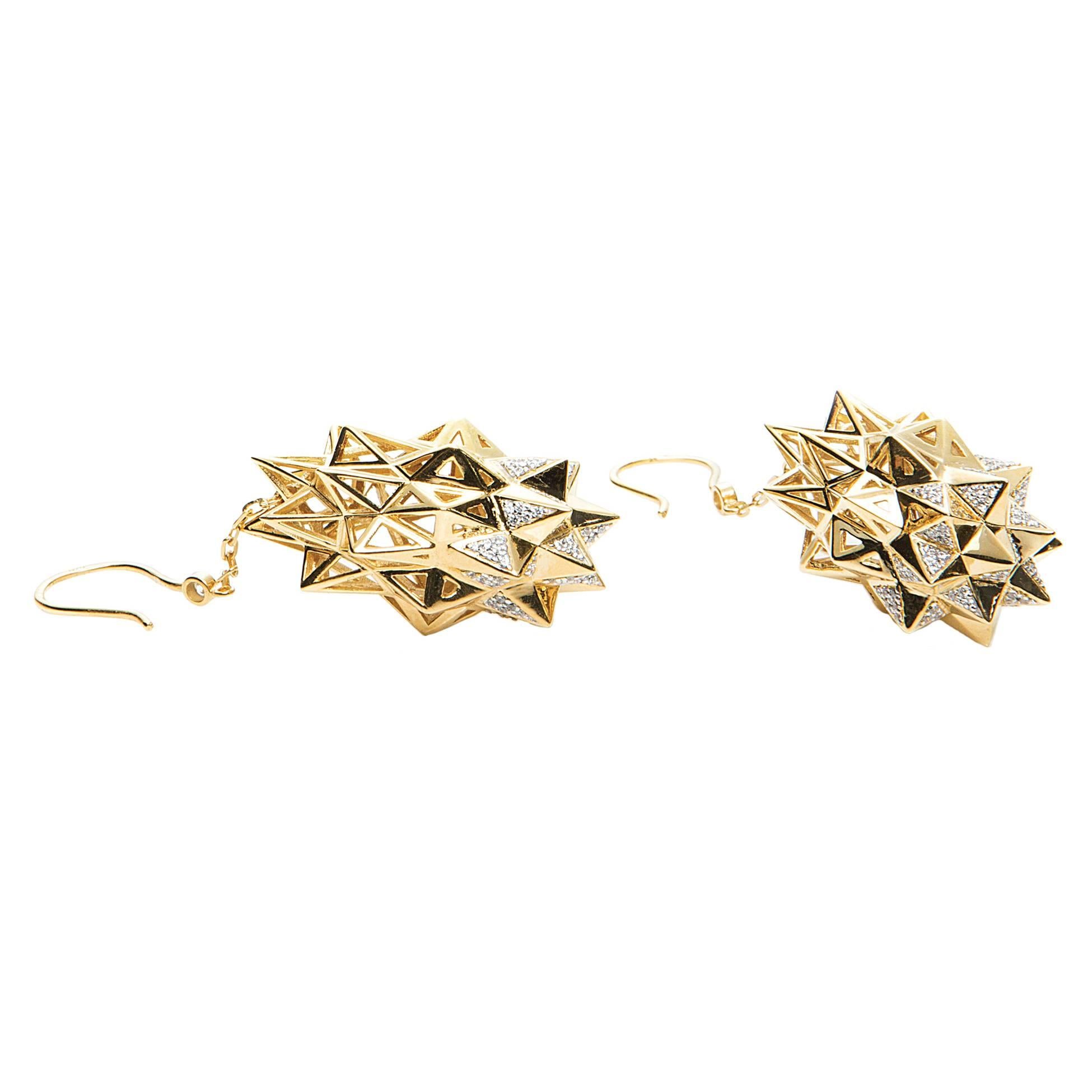 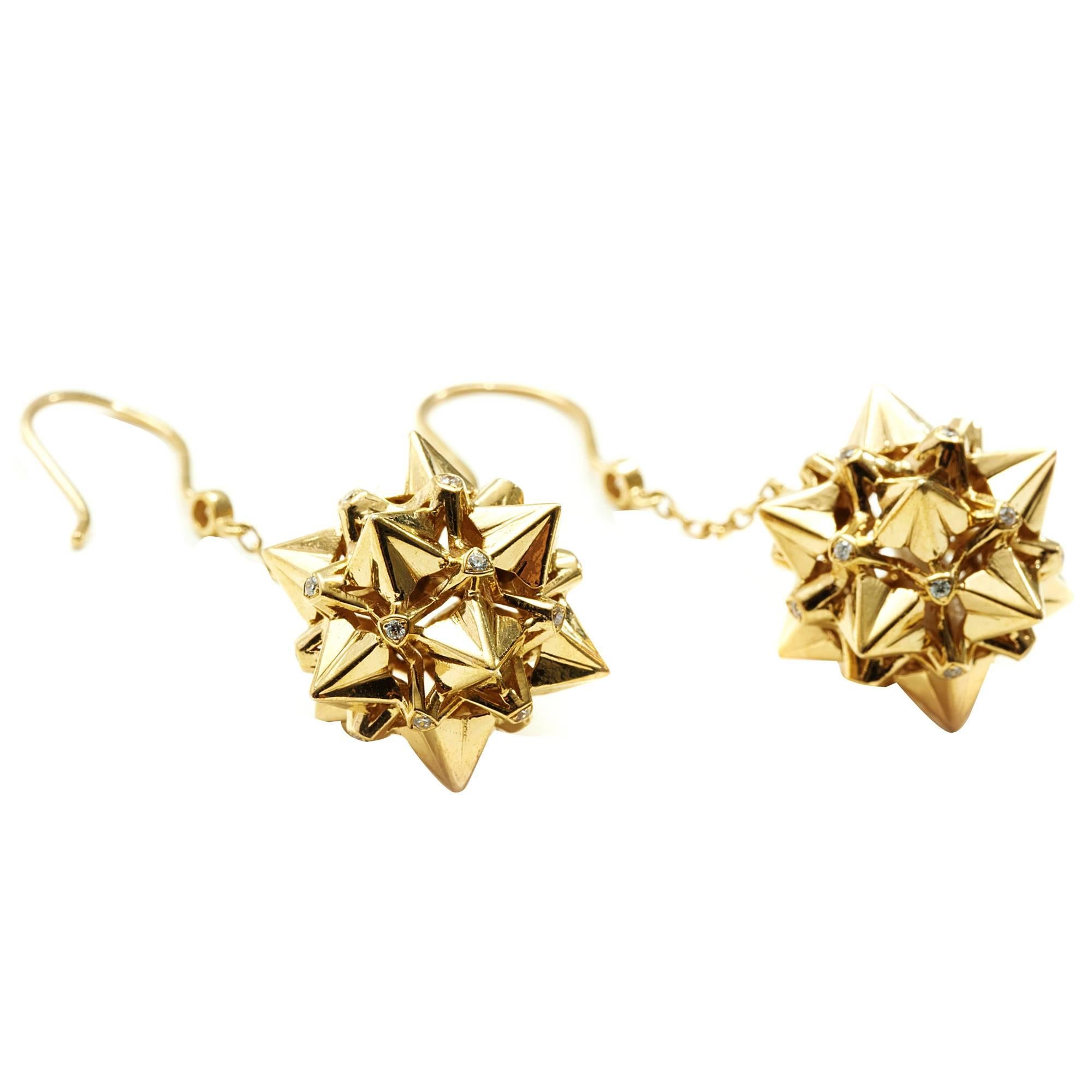 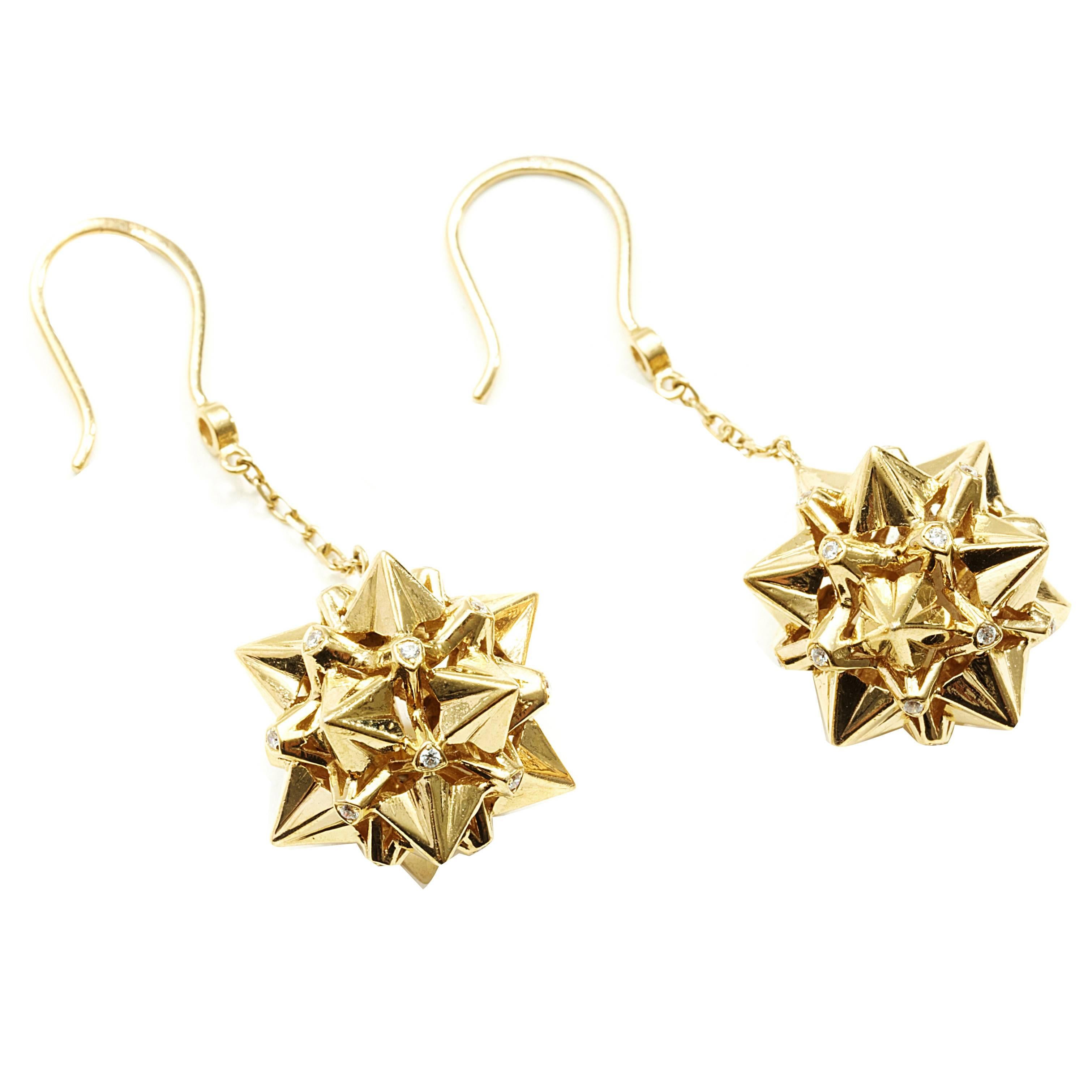 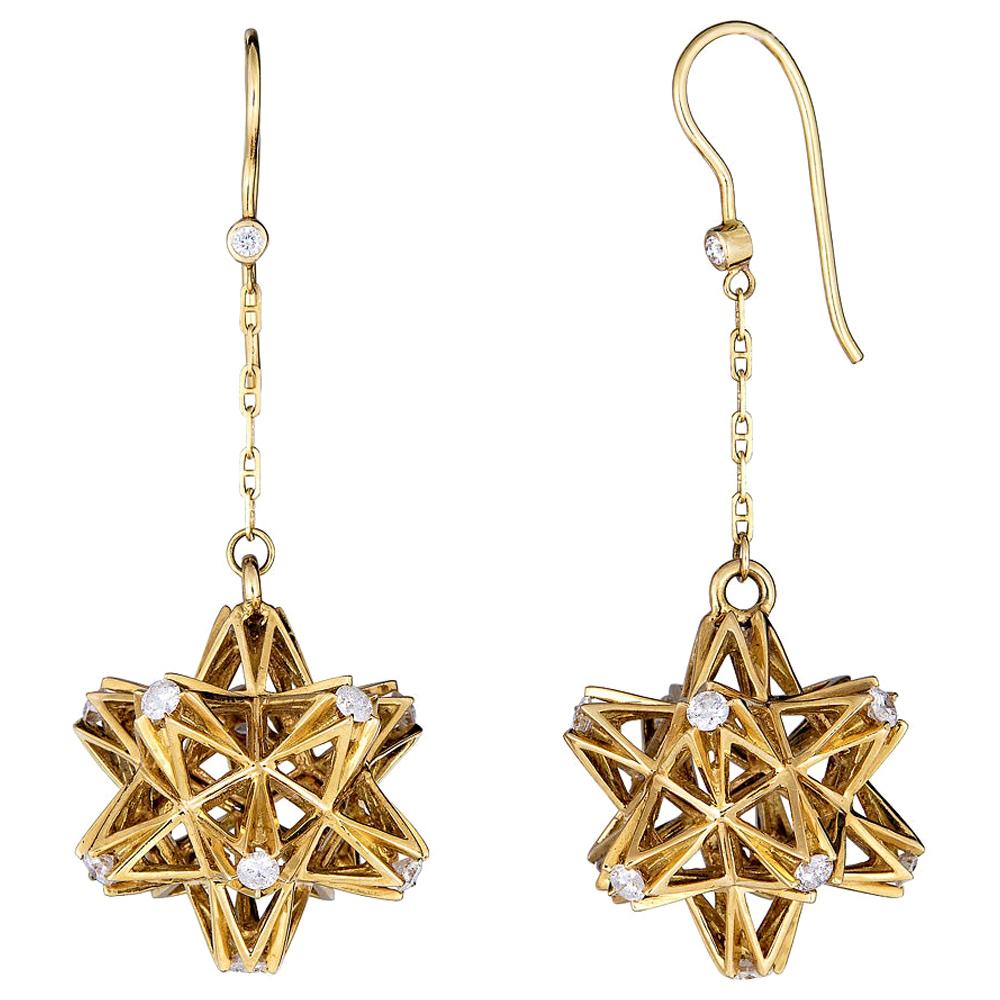 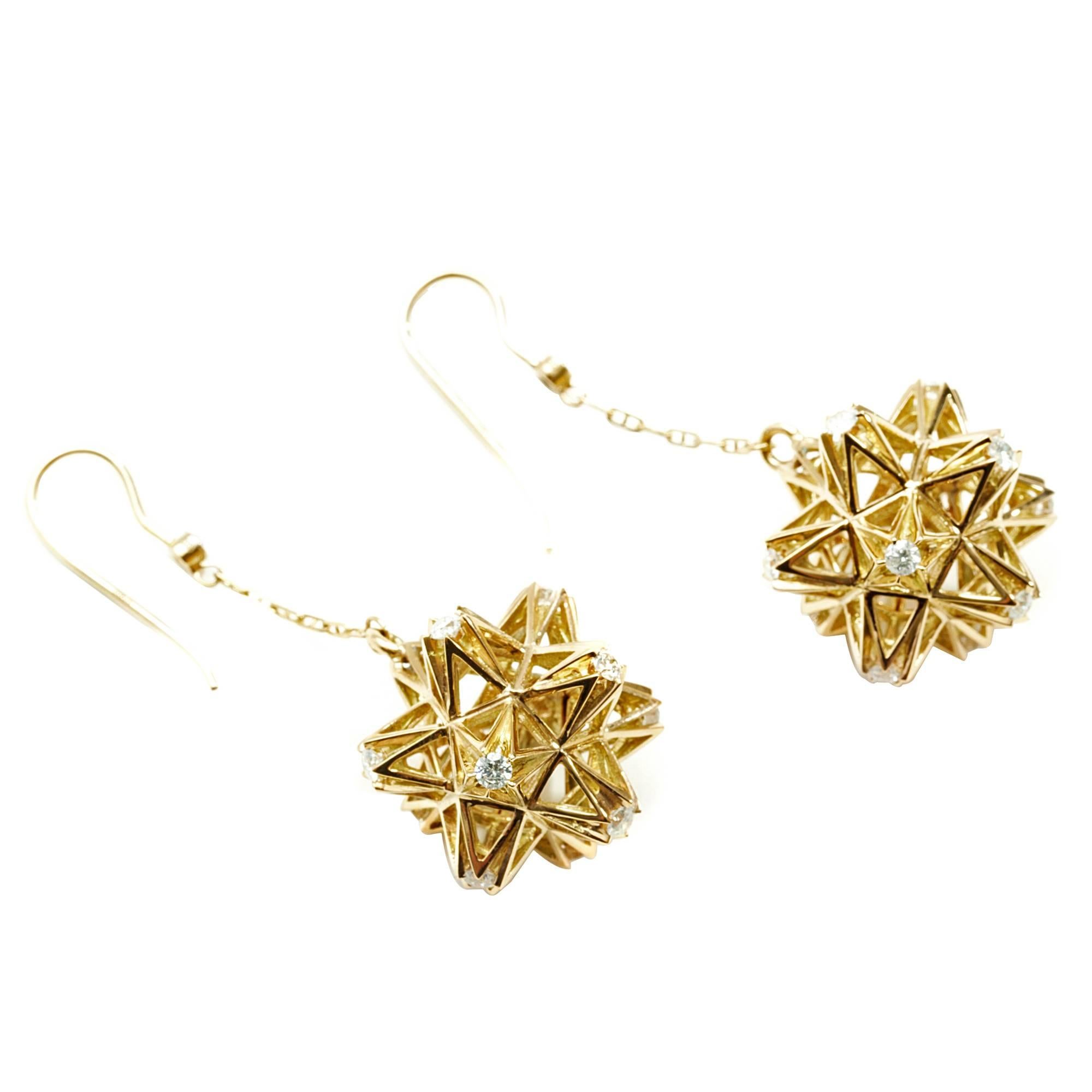 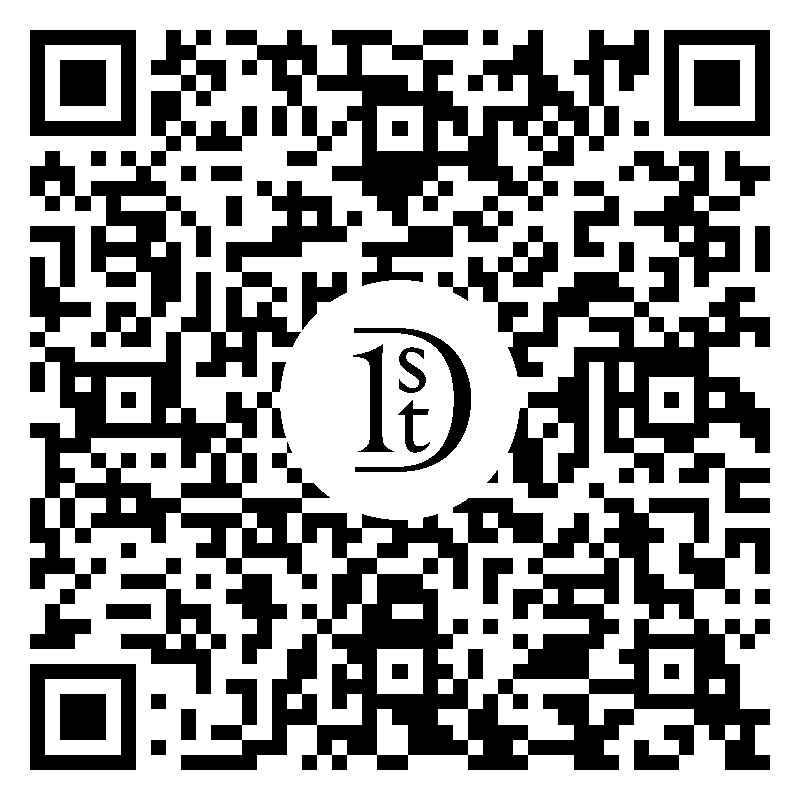 These Spherical Diamond Dangle Earrings Golds are 1 of 5 earrings which are made to order in the material and color of your choice. These earrings are reflective of the broader works of designer John Brevard as they are inspired by sacred geometry which involves sacred universal patterns. These patterns are used in the design of everything in our reality, most often seen in sacred architecture and sacred art. These simple, statement earrings are made of 18K yellow gold and feature 48 white diamonds that are 1.5mm each. John Brevard applies his background in architecture and multidisciplinary arts to create ethereal designs that are not only visually stunning but also conceptually powerful. Inspired by the principles of natural order, each creation is symbolic of the inseparable relationship of the part to the whole. After a near death experience, Brevard developed a fascination with proportions and patterns found in nature and theoretical sciences, namely sacred geometry and phenomenology. Brevard manifests this vision through an experience, which encompasses and merges design, fashion, architecture, and technology for an integrated new world. 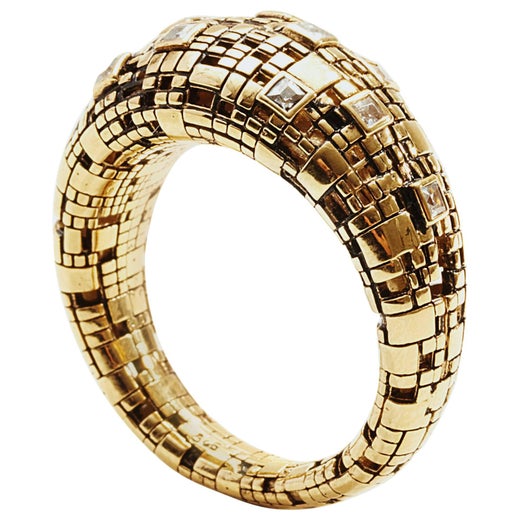 Prolific jewelry designer John Brevard said it was a near-fatal childhood illness that led him to question the nature of human existence and its connection with the universe. Art and design would come to serve as an outlet for his self-expression, and Brevard’s visually engaging, cerebral and environmentally sustainable statement pieces embody the essence of 21st-century modernism.

Born in 1982 in Miami, Florida, Brevard had an intrinsic interest in nature and the arts as a child. However, at age 14, he contracted encephalitis and meningitis, leaving him comatose for several weeks. His recovery left him with a deep-seated desire to explore broad philosophical questions about human existence.

“There’s nothing more inspiring than the universe,” Brevard told Haute Living in 2014. “I’m influenced by realms of existence beyond our five physical senses ... alternate dimensions beyond our normal waking state consciousness.”

The experience, Brevard claimed, “served as the catalyst for his design philosophy and work ethic,” and he pursued a career in the arts, graduating with degrees in architecture and design.

In 2007, Brevard established his namesake brand. Its offerings included jewelry, accessories, handbags, shoes, furniture, art and more. He opened his first pop-up showroom in 2010 in Wynwood — an arts and culture district in Miami — where he displayed his visual art, which was listed in the Miami New Times’ “Best of Miami.”

Brevard launched his first luxury jewelry line in 2012 with fashion rings, pendant necklaces and cuff bracelets made of gold and silver, and embellished with precious stones. He opened his first permanent atelier and appointment-only showroom in Coral Gables the following year.

In 2015, Brevard opened his first flagship store in New York City and gained membership to the Council of Fashion Designers of America. He also launched Thoscene — a unique customization software that uses an astrological algorithm to create jewelry and accessories based on the time, date and location of a person’s birth.

Today, Brevard’s jewelry and other works can be found in galleries and retailers worldwide and have been featured in magazines such as Vogue, Forbes and Vanity Fair.

On 1stDibs, discover a range of John Brevard rings, necklaces, bracelets and more.

About the Seller
5.0
Located in Coral Gables, FL
Vetted Seller
These experienced sellers undergo a comprehensive evaluation by our team of in-house experts.
Established in 2007
1stDibs seller since 2015
73 sales on 1stDibs
Typical response time: A week
More From This Seller

$1,495 / set
Free Shipping
Yellow Gold Diamond Butterfly Dangle Earrings
Located in Beverly Hills, CA
These 18 karat yellow gold diamond dangle earrings are an easy piece to wear. They are earrings you can wear both day and night and ones you can dress up or down. The butterflies are...
Category

$20,000
Cassis Yellow Gold Diamond Dangle Earrings
By Cassis Jewelry Inc.
Located in Houston, TX
18K yellow gold earrings by Cassis. The bottom dangle is a pear shape with pave diamonds. There are eighty-two round diamonds that total 1.25 carats, G-H color and VS clarity. The...
Category