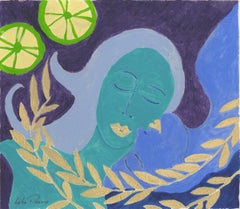 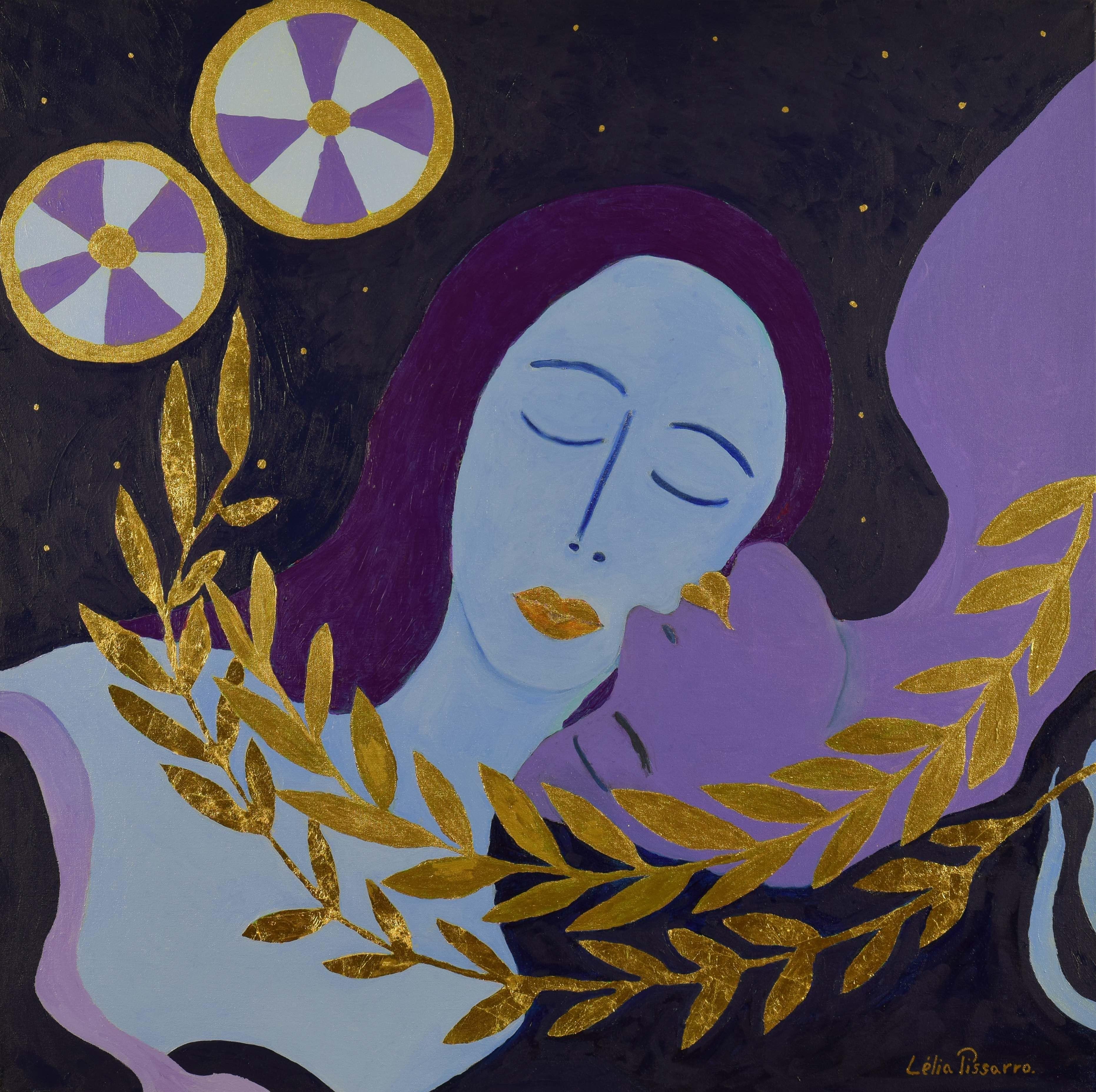 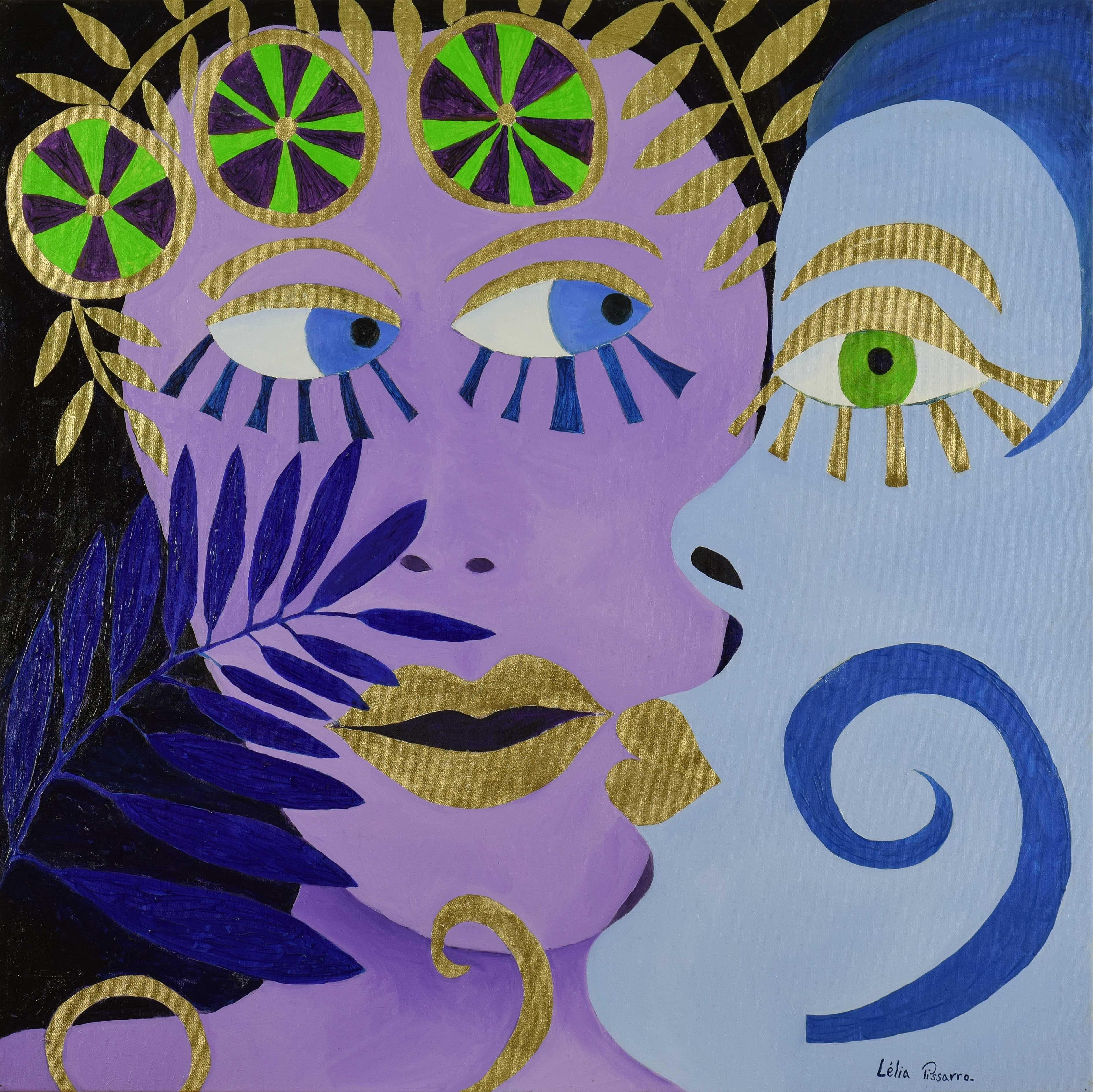 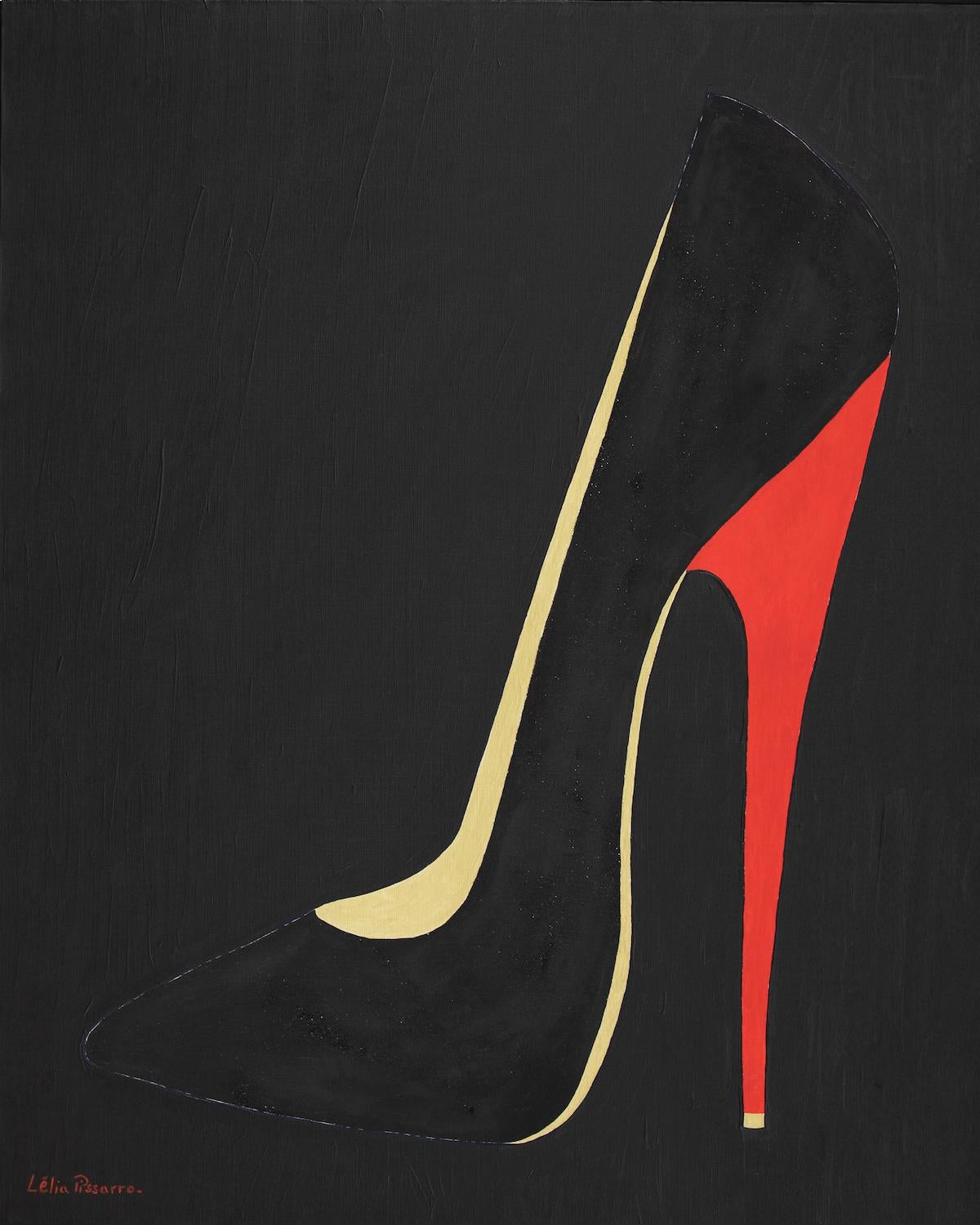 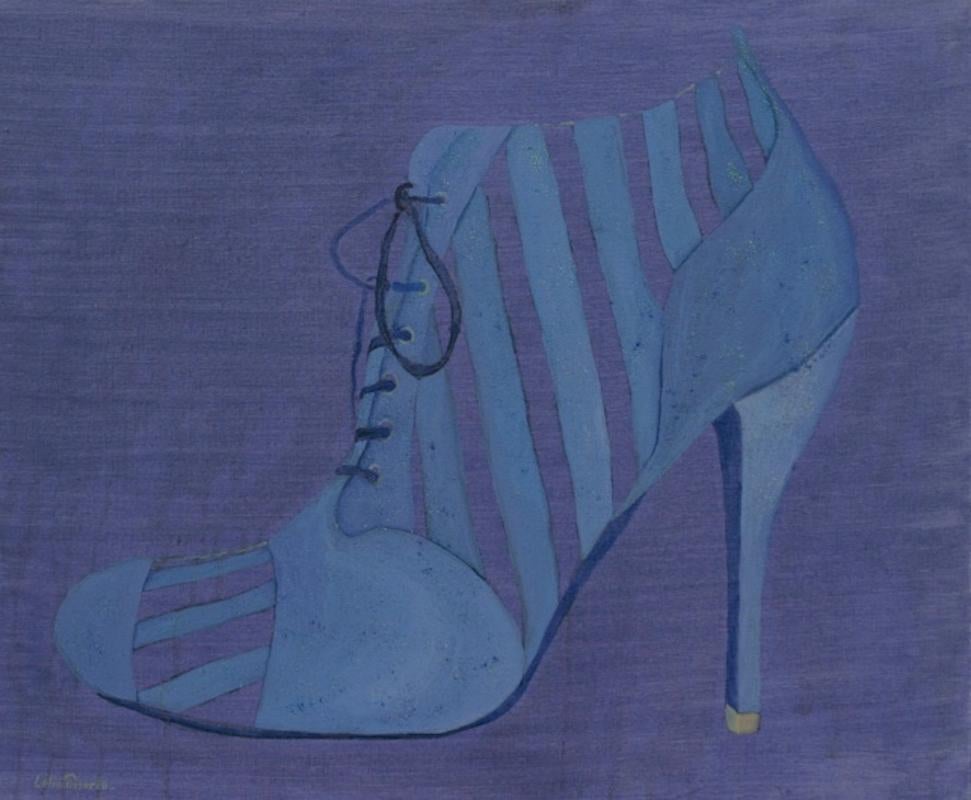 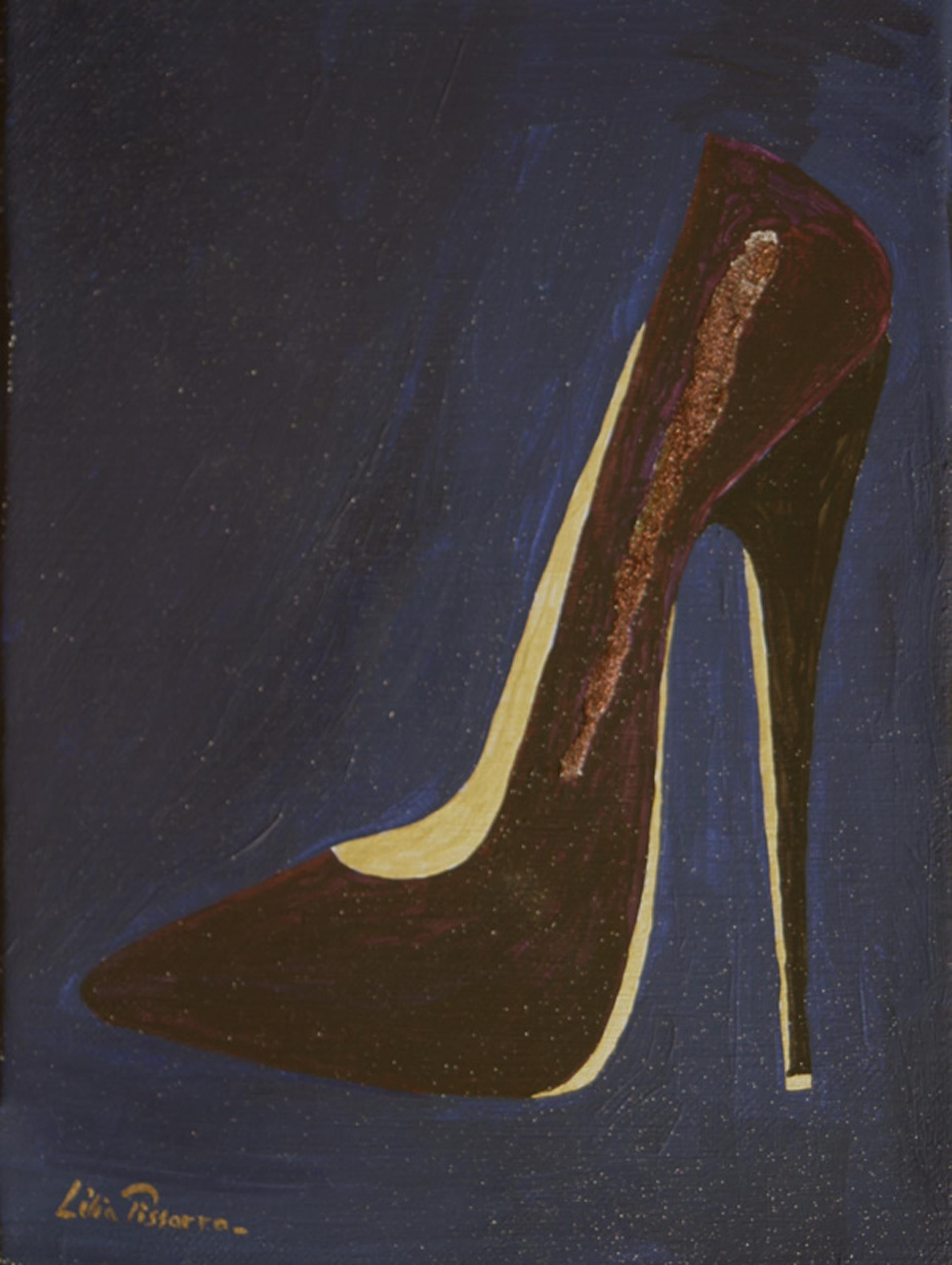 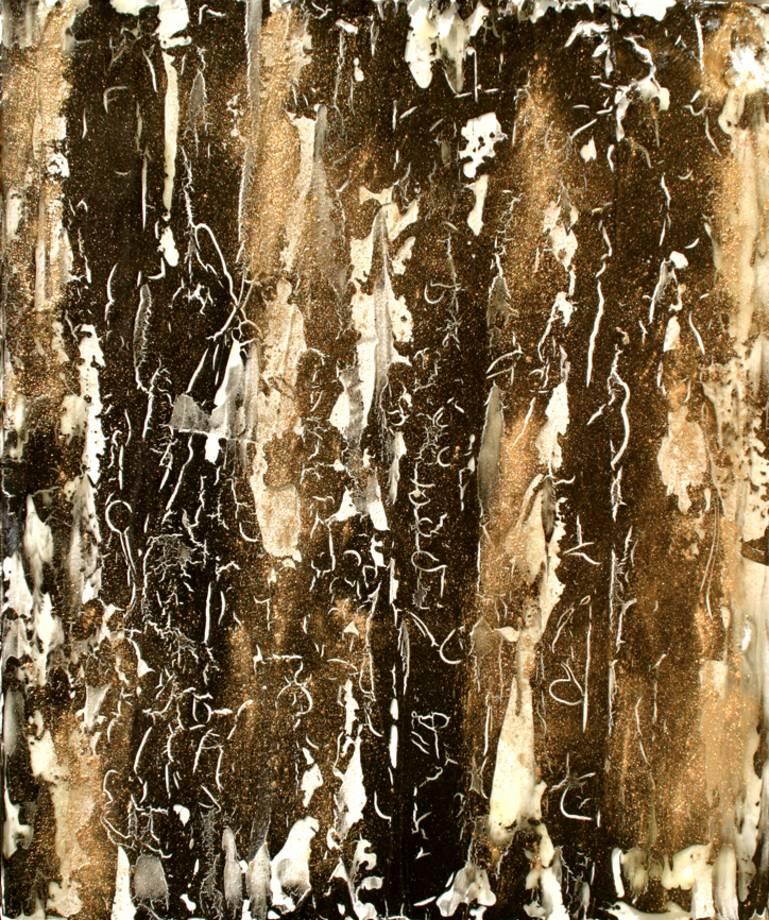 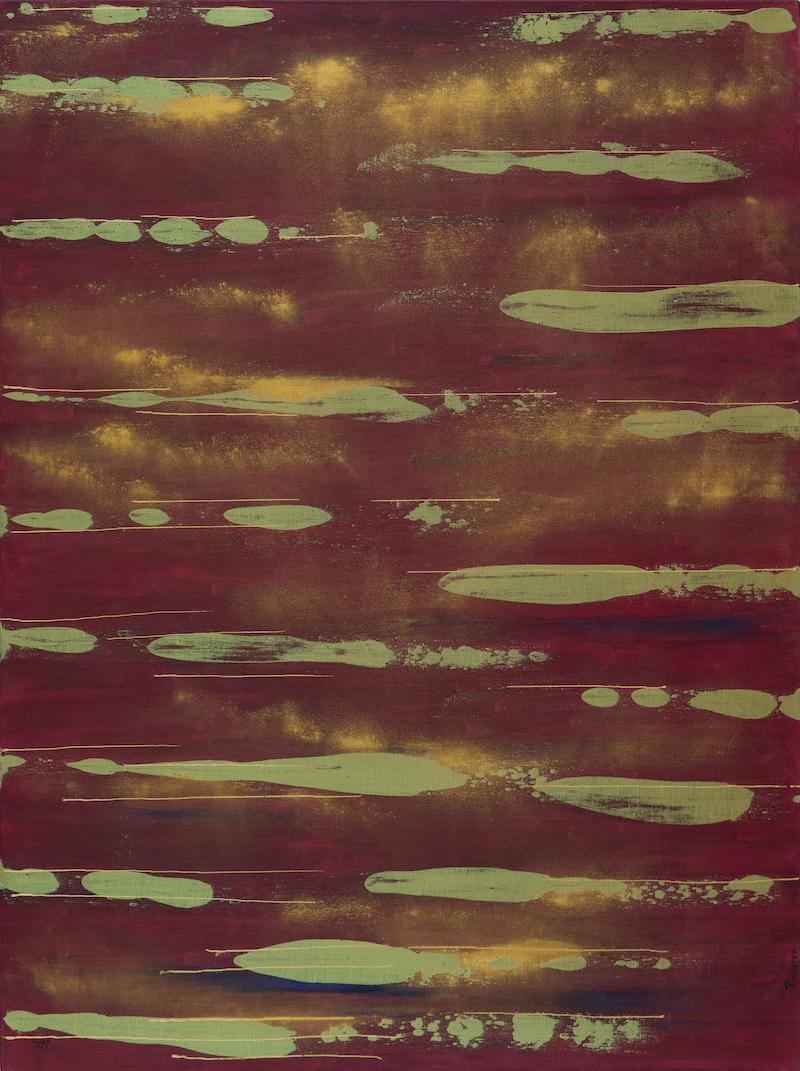 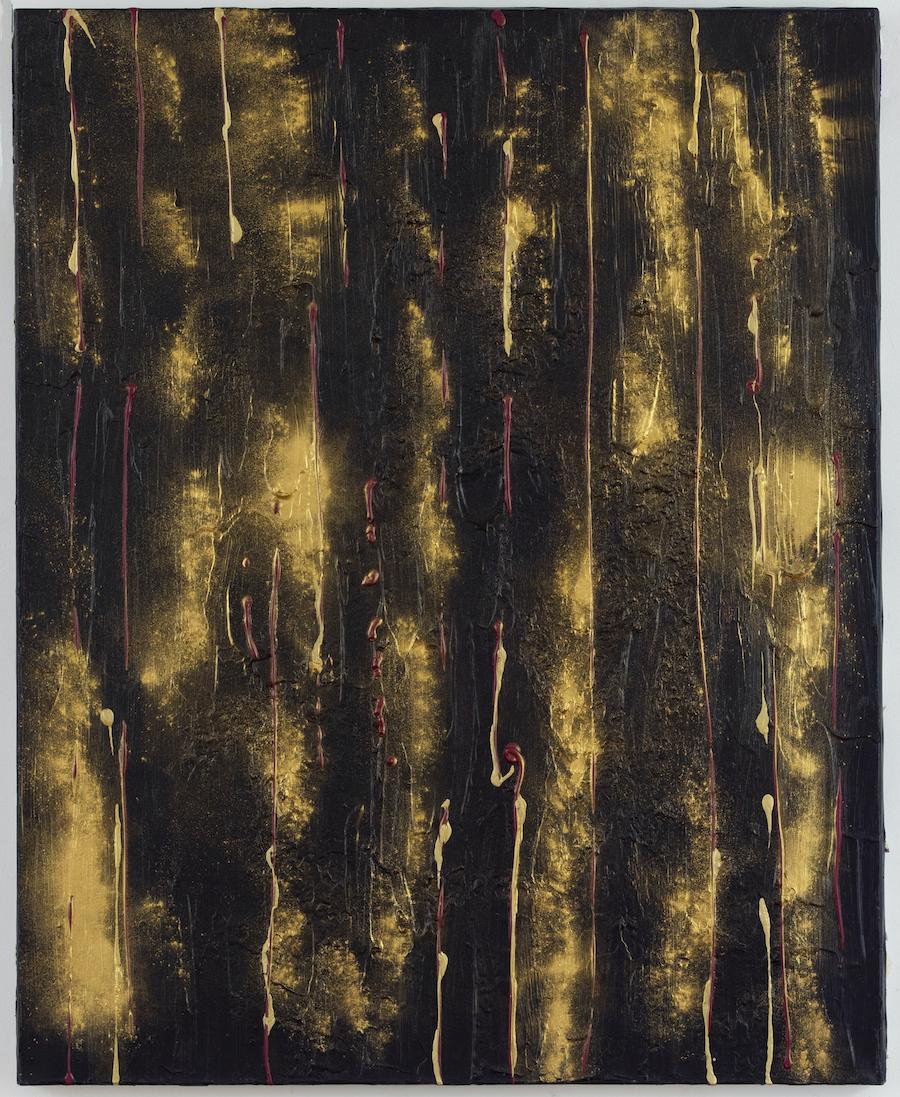 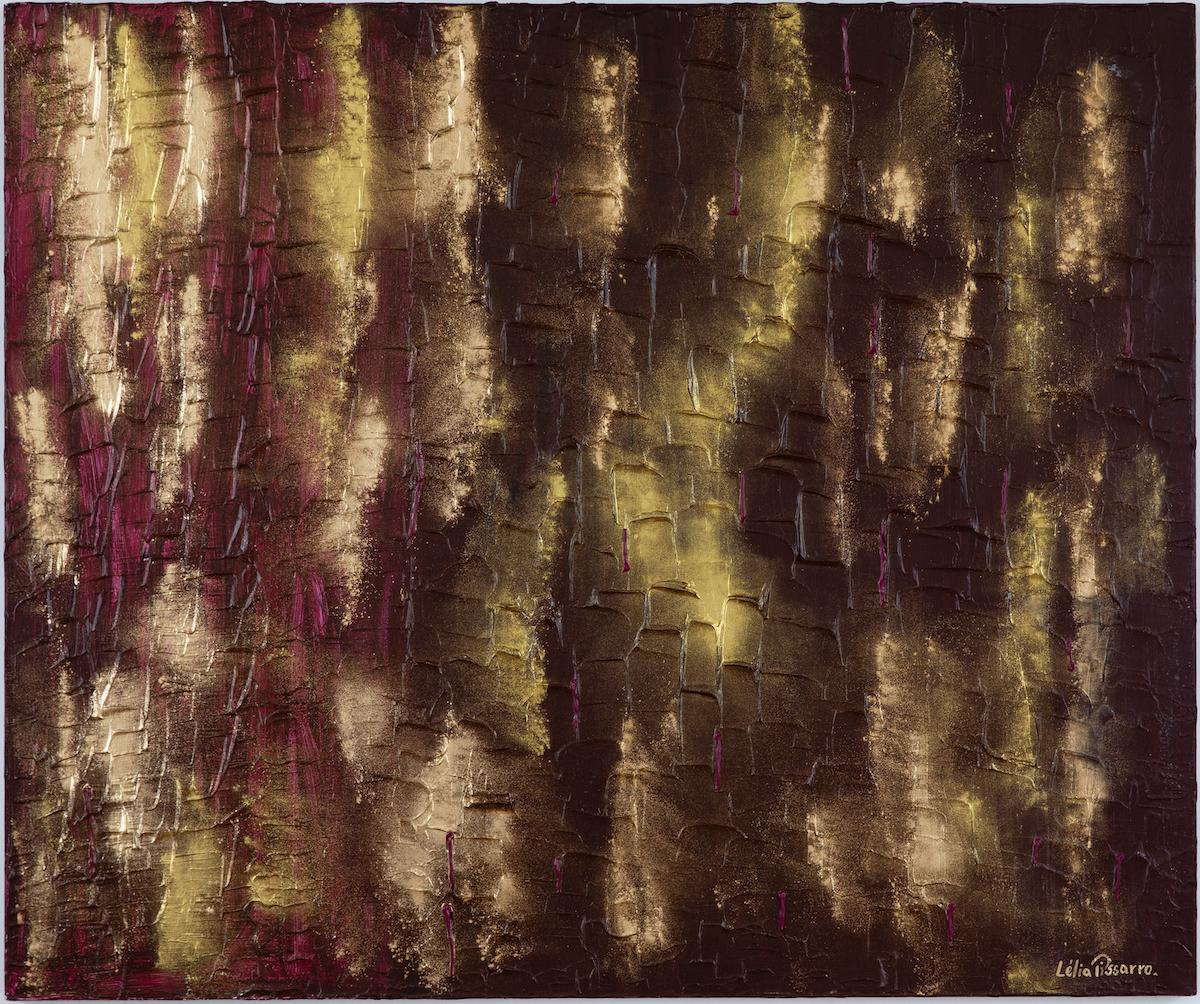 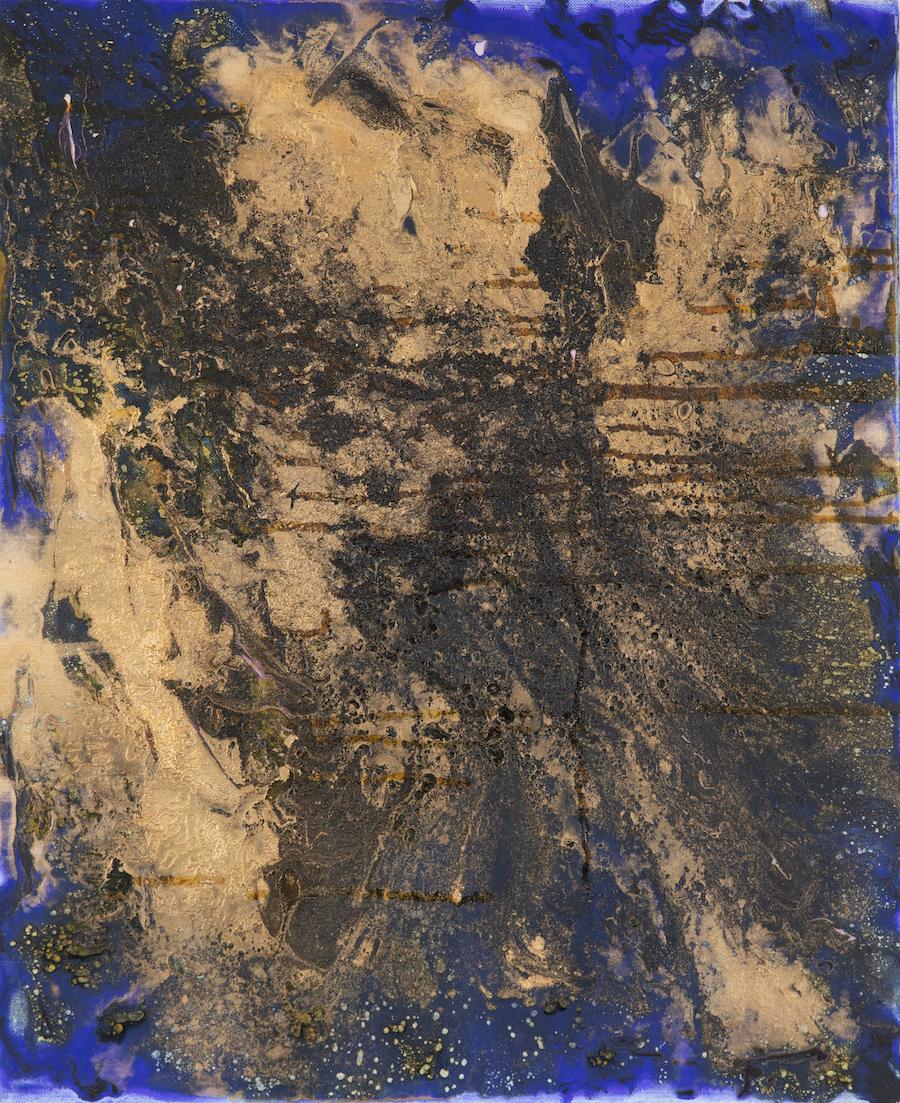 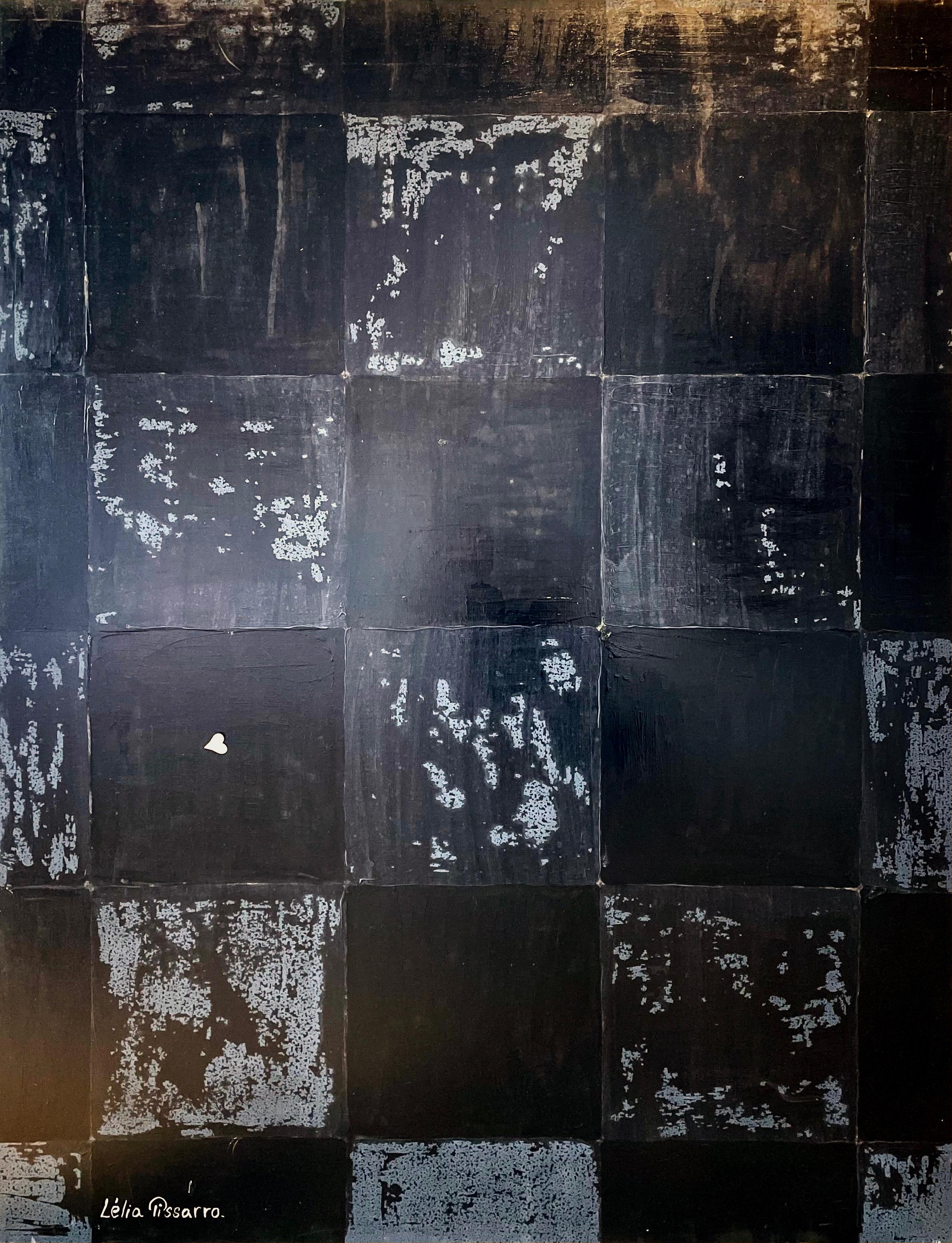 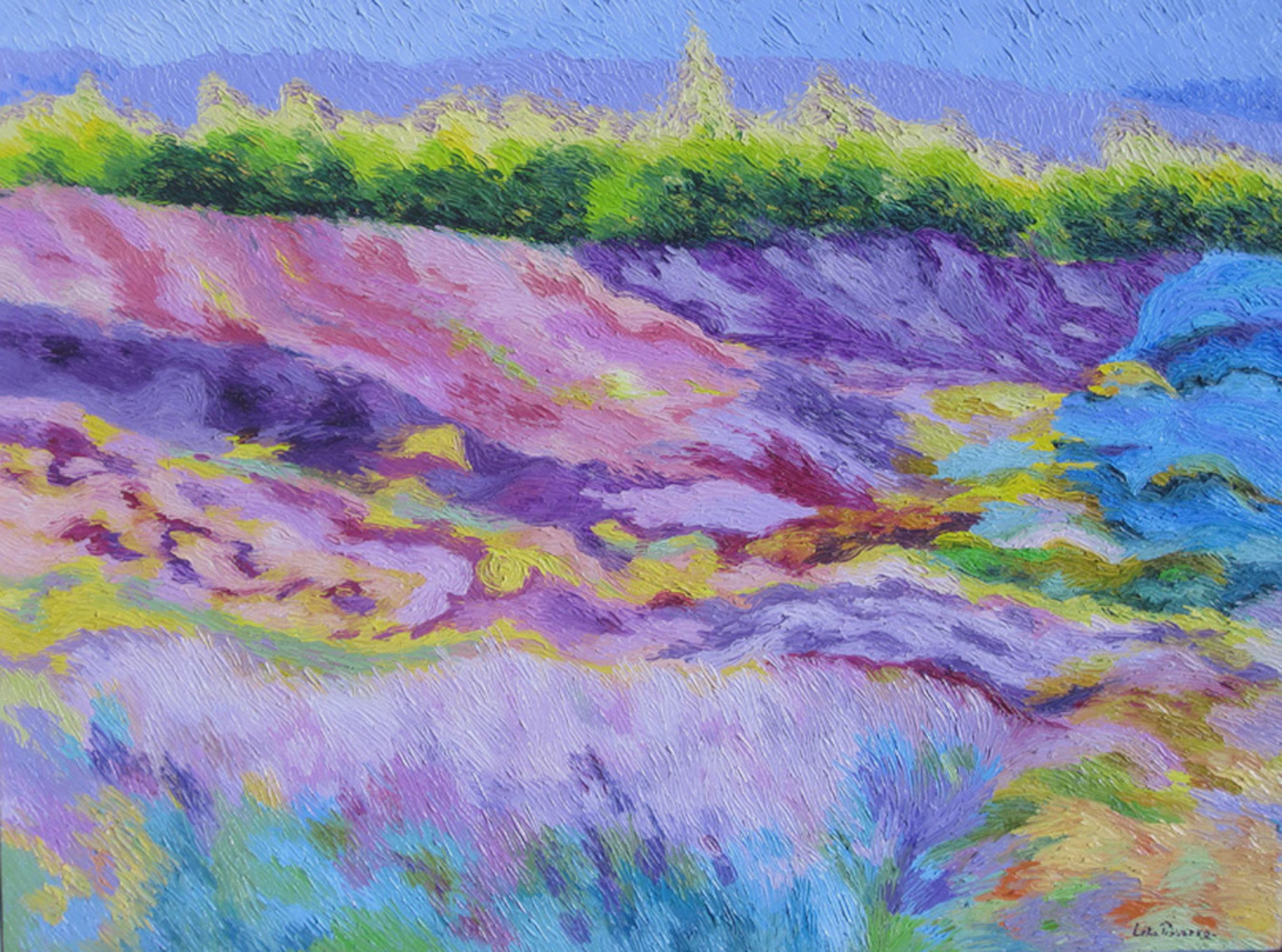 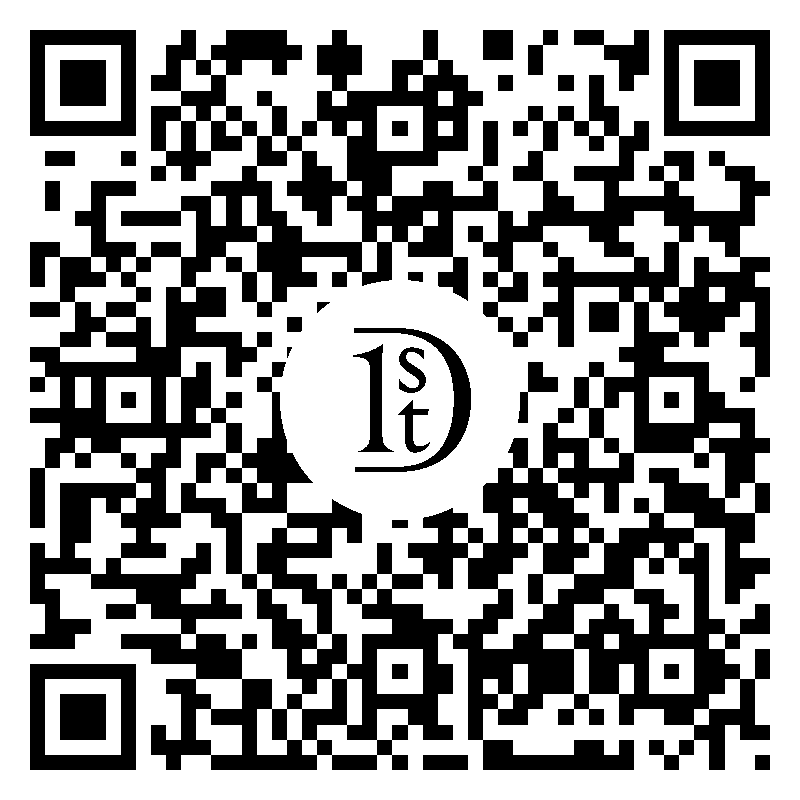 Mother and Daughter by Lélia Pissarro Oil and gold leaf on paper card 20.2 x 23 cm (8 x 9 inches) Signed lower left, Lélia Pissarro; signed and titled on the reverse Executed in 2021 Artist biography Born in Paris in 1963, Lélia is the third and youngest child of Hugues-Claude and Katia Pissarro. She was raised, however, in the loving care of her grandparents Paulémile Pissarro, Camille’s youngest son, and his wife Yvonne, in Clécy, Normandy. From a young age, Lélia’s interest in drawing and painting was nurtured by her grandfather while she sat beside him at his easel, captivated. He taught her the fundamental Impressionist and Post-Impressionist techniques he had learnt from his father and brothers before him and watched as her skills blossomed rapidly. Standing readily on the shoulders of giants, Lélia sold her first painting to New York art dealer Wally Findlay, when she was only four years of age. When Lélia turned 11 she moved to Paris to live with her parents where, with the guiding support of her father’s teachings she began to broaden her skill sets. Under the watchful eye of her father Hughes Claude Pissarro, she became exposed to new environments and learnt to experiment with abstract styles and subjects. At age 14 Lélia submitted some of these works to the exhibition ‘Salon de la Jeune Peinture’ at the Luxembourg Museum in Paris. Being underage, however, she had to submit these works secretly under the pseudonym Rachel Manzana Pomié. With her parents dividing their time between France and California, Lélia found herself moving between Tours, Paris and San Francisco, all the while studying fine art and psychology at the University des Beaux Arts. She eventually settled in Paris to teach art at the Moria School and study oil painting conservation under the guidance of a teacher from the Louvre museum. During this time she began to present her work in solo exhibitions in Paris, Lyon, Mulhouse and Rennes. In 1988 Lélia married English art dealer David Stern and moved to London. Their three children Kalia, Lyora and Dotahn, all paved their own way in the art world. From 1995 Lélia participated in a series of exhibitions entitled Pissarro – The Four Generations, which were held in galleries in London, Tel Aviv, Boston, Austin, San Francisco, Cleveland, Milwaukee and Los Angeles as well as a number of museums in Japan in 1998 and the Museum of Art in Fort Lauderdale, Florida in 2000. In 1999 Lélia also became one of the founders of the Sorteval Press, a group of artists dedicated to developing techniques in etching and printmaking. Their first exhibition took place at the Mall Gallery in London. In 2005 following a long break in painting because of cancer, Lélia started a journey into modern art creating a number of different series: Circles, Shoes, Animals, exploring these until she reached the point of abstraction and minimalism. Developing innovative techniques, she began incorporating in her work new materials such as gold, wax and encaustic paint. To coincide with a major exhibition at Stern Pissarro gallery in 2010 a book entitled The Colours of Silence was published on her entire career, documenting the steps in Lélia’s life story while offering a retrospective view of her works which amply attest to her artistic diversity and sustained spirit of adventure. Working today from her London studio located by Richmond Park and the river Thames, Lélia upholds the legacy of painting en plein-air while simultaneously continuing to explore modern techniques. She works dedicatedly on a selection of different series all borne out of her home studio - a carefully crafted space designed to meet her evolving requirements. Besides her work as a painter, today Lélia is also a partner in Stern Pissarro Gallery and is the official expert for the work of her grandfather Paulémile Pissarro, as well her great uncles Manzana and Ludovic Rodo Pissarro. Amidst all this, Lélia still finds a way to make time to devote herself to another great passion, teaching. 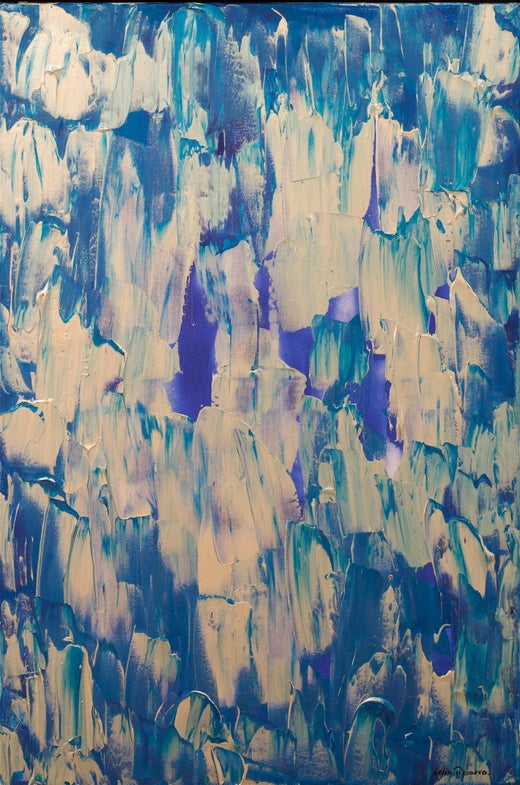 Lélia Pissarro was born in Paris on the 27th of July in 1963, the third and youngest child of the artist Hugues-Claude Pissarro and Katia, an art dealer.

From infancy until the age of 11 Lélia was entrusted to the care of her grandparents, Paulémile Pissarro and his wife Yvonne, and her interest in drawing and painting was nurtured by Paulémile whilst living in Clécy, Normandy. Paulémile taught her the fundamental Impressionist and Post-Impressionist techniques as had been taught to him by his father and his brothers, and so began her love for figurative art. She sold her first canvas to Wally Findlay, a New York art dealer, when she was only four years of age!

Before his death, Paulémile made Lélia promise to retain her family name, to continue painting and to make art her life.

At the age of 11, Lélia returned to Paris to live with her parents and it was then that she had her first exhibition at the "Salon de la Jeune Peinture" where she was, in all probability, the youngest ever exhibitor.

Hugues-Claude, whose style veered towards conceptual art, took over from Paulémile as Lélia’s teacher and consequently she practiced drawing on a daily basis.

At 15 Lélia participated in an exhibition at the Luxembourg Museum in Paris and a year later, having excelled in a special examination, enrolled at the Ecole des Beaux-Arts in Tours. With her parents dividing their time between France and California, Lélia found herself moving between Tours, Paris and San Francisco.

During this period Lélia became dissatisfied with conceptual art and reverted to the family's traditional creative roots, which distanced her from her avant-garde teachers. However, during the late 1980s, as the figurative style once again became fashionable, Lélia’s work gained in popularity.

Whilst in Paris, Lélia taught art at the Moria School and studied oil painting restoration under Madame De Pangalleria at the laboratory of the Louvre and during this time had solo exhibitions in Paris, Lyon, Mulhouse and Rennes.

Following her marriage in 1988 to David Stern, the London art dealer, she moved to London, where her studio has become a meeting place for artists and friends and where conversation and tuition generate an exchange of opinions on drawings, pastels, watercolours, oil paintings and engravings.

In 1999 Lélia became one of the founders of the “Sorteval Press,” a group of artists dedicated to developing their skills and techniques in etching and printmaking. Their first exhibition took place at the Mall Gallery in London, and the artists’ efforts ensured a highly successful first exhibition.

Balancing her role as artist and mother to three children, Lélia has successfully exhibited not only in London but also in Japan, South Africa, France, Switzerland and Israel. In the United States, Lélia's work has been shown in New York, Boston, Washington D.C., Dallas, San Francisco and Los Angeles.

Following the tradition of her great-grandfather Camille Pissarro, her grand-father Paulémile and her father Hugues-Claude, this fourth-generation artist has played an important role by participating in a series of exhibitions entitled “Pissarro — The Four Generations.”

About the Seller
5.0
Located in London, United Kingdom
Recognized Seller
These prestigious sellers are industry leaders and represent the highest echelon for item quality and design.
Established in 1964
1stDibs seller since 2015
72 sales on 1stDibs
Typical response time: 1 hour
Associations
Society Of London Art Dealers
More From This SellerView All
People Also Browsed
You May Also Like