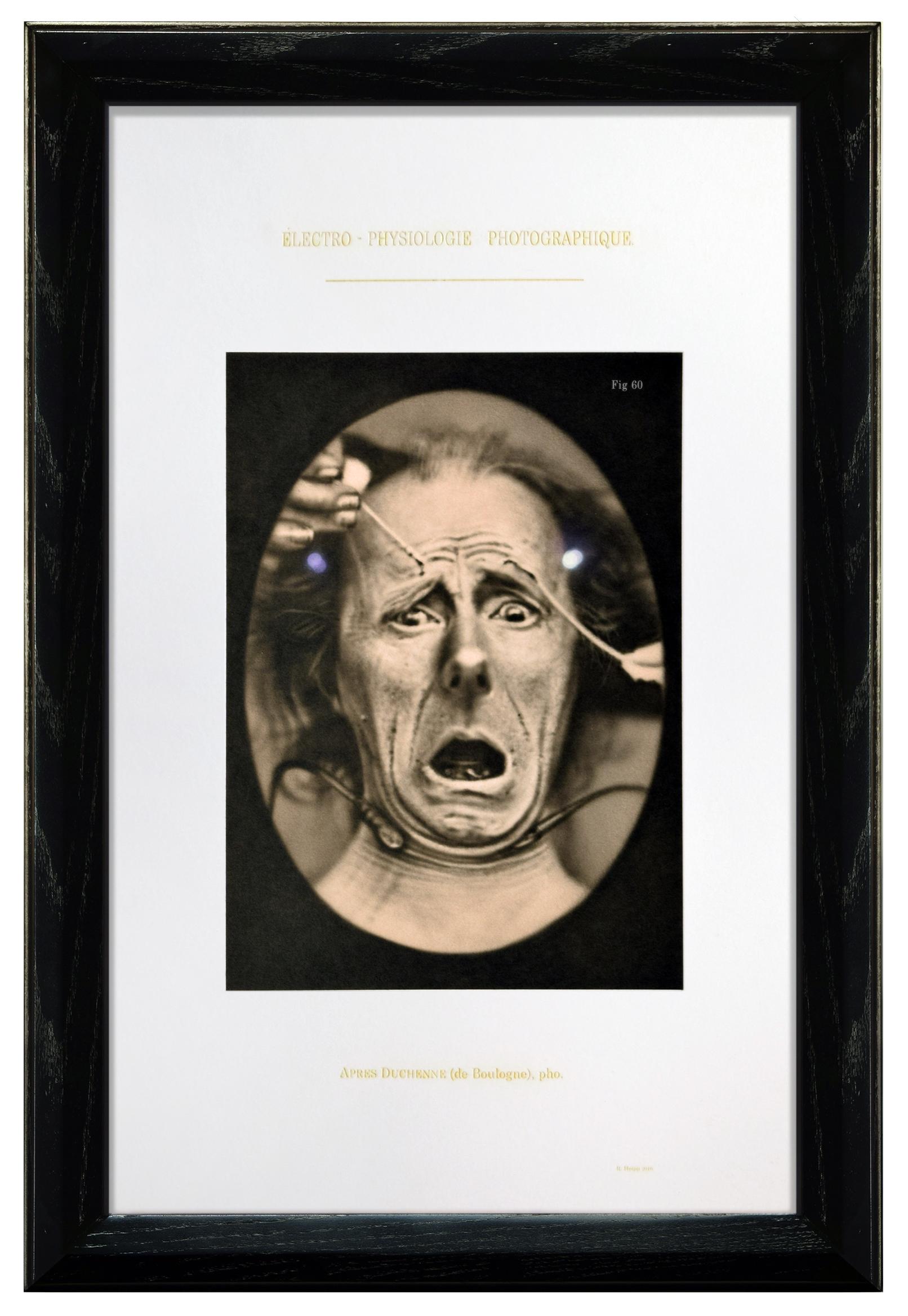 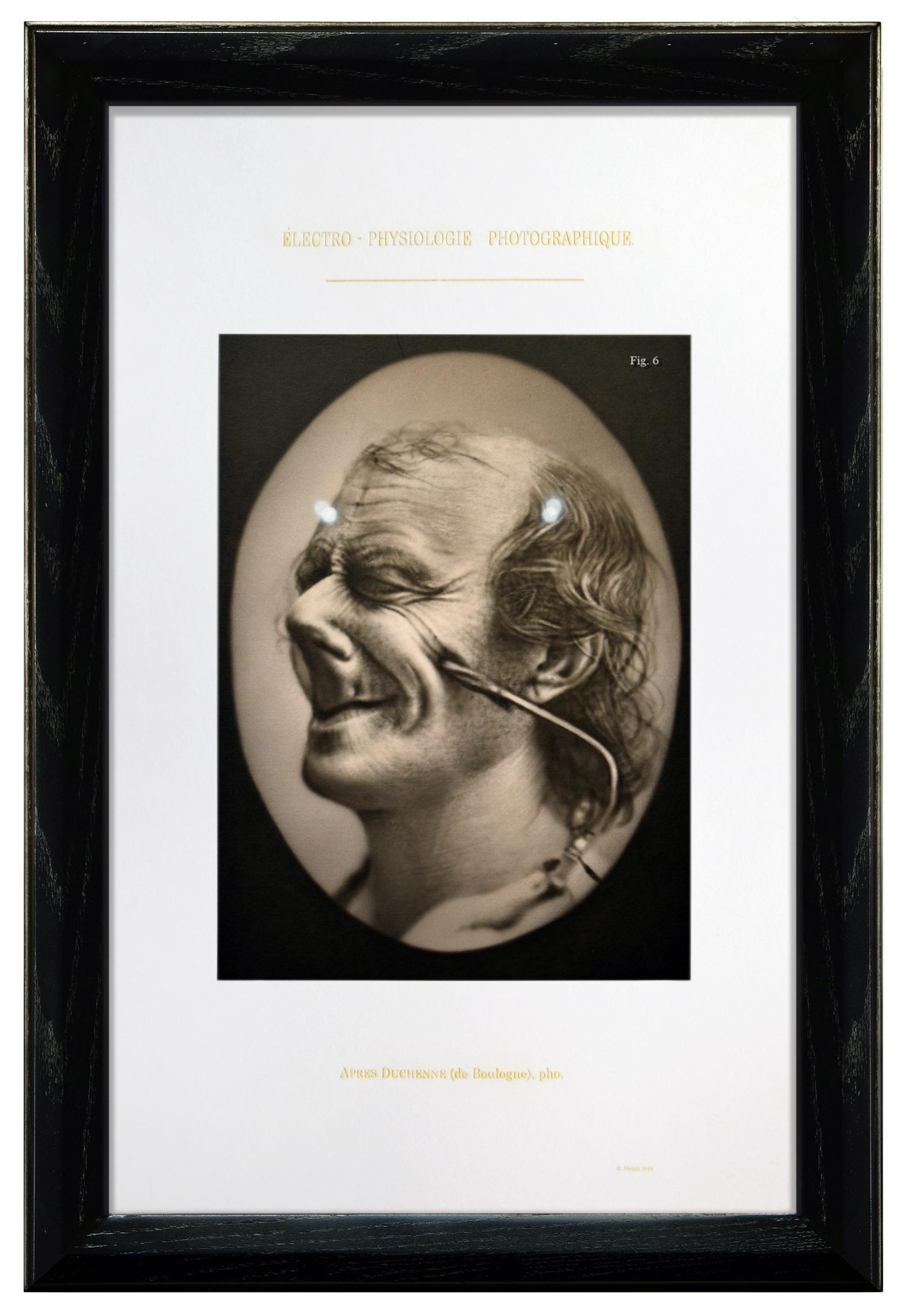 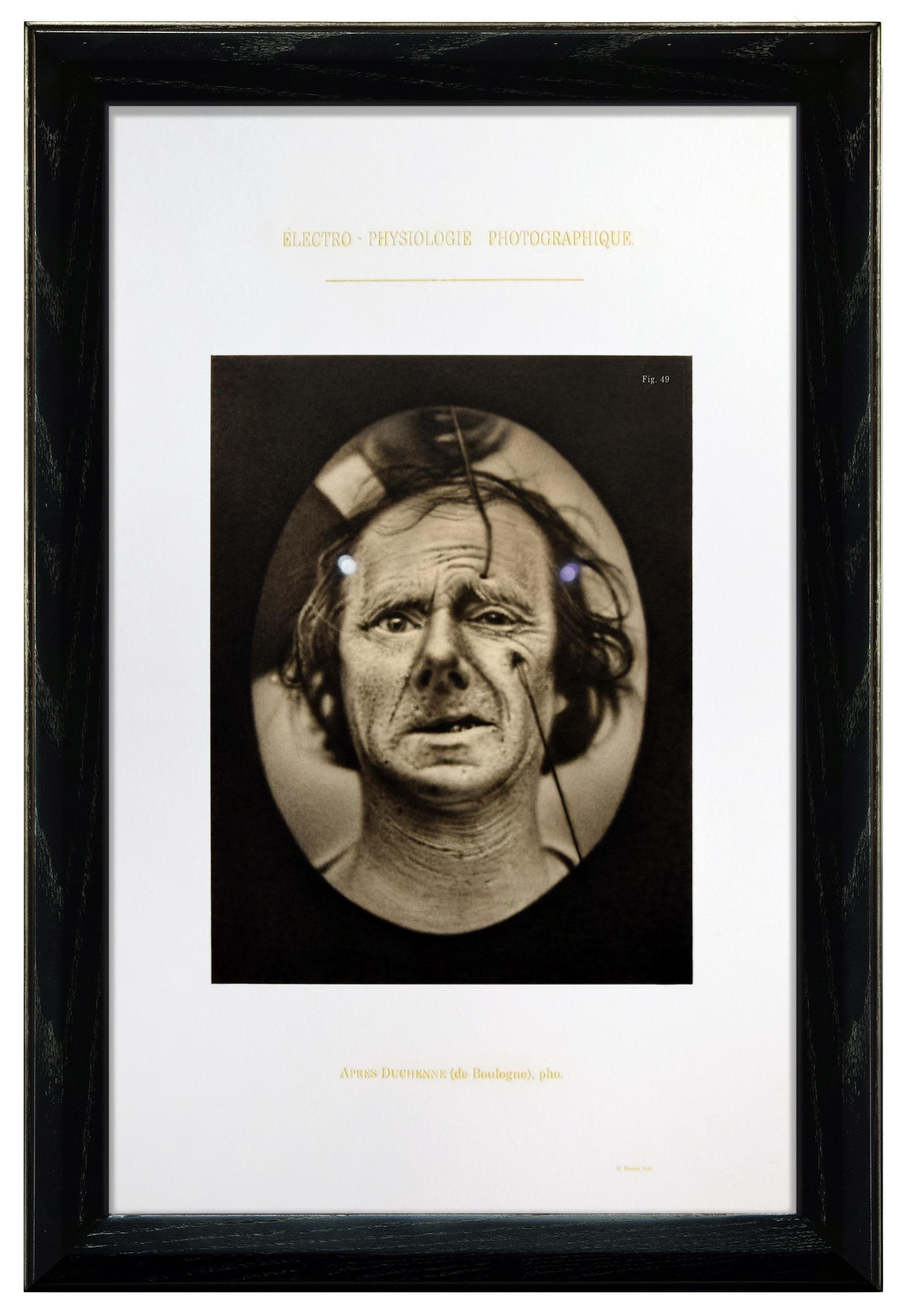 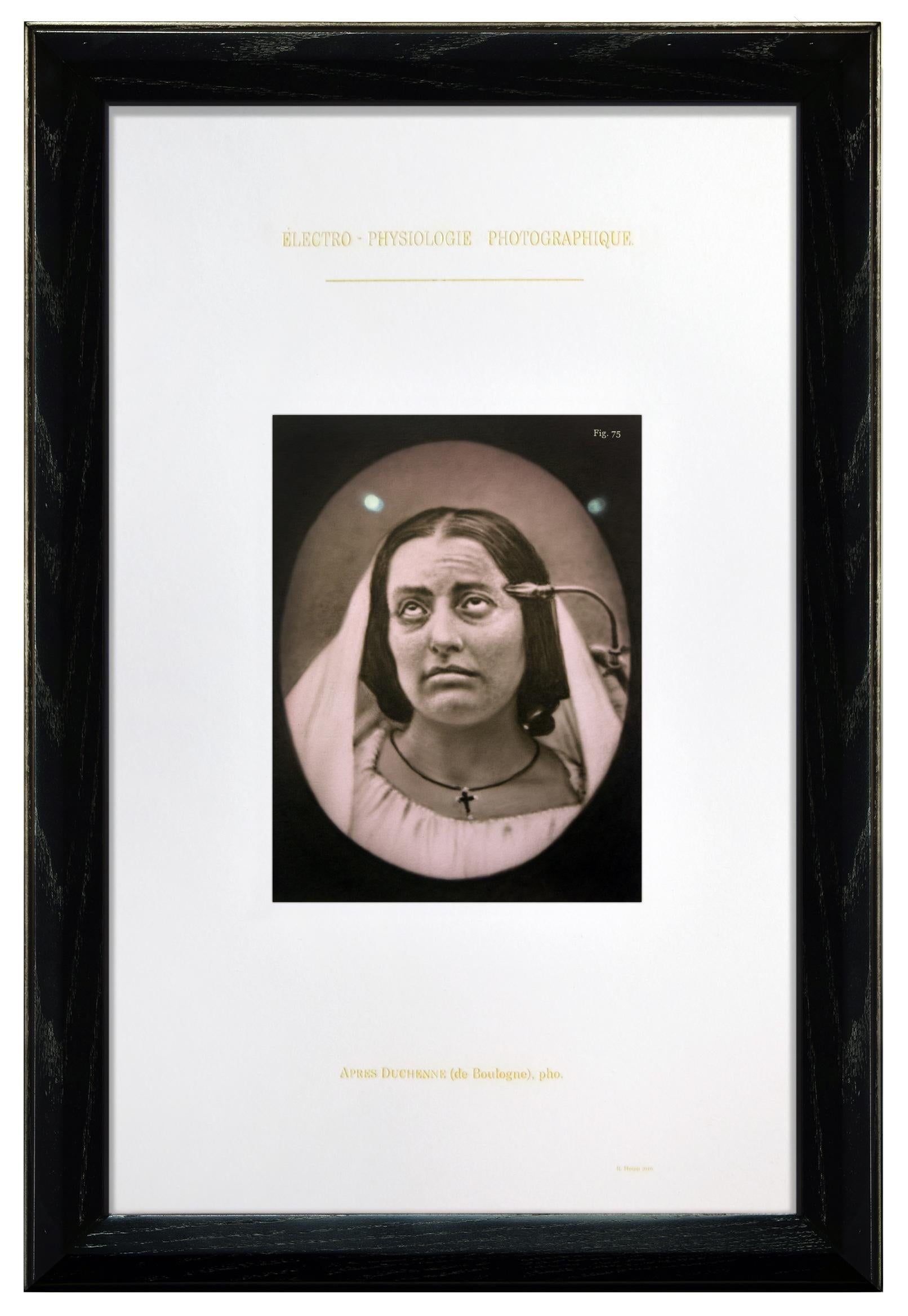 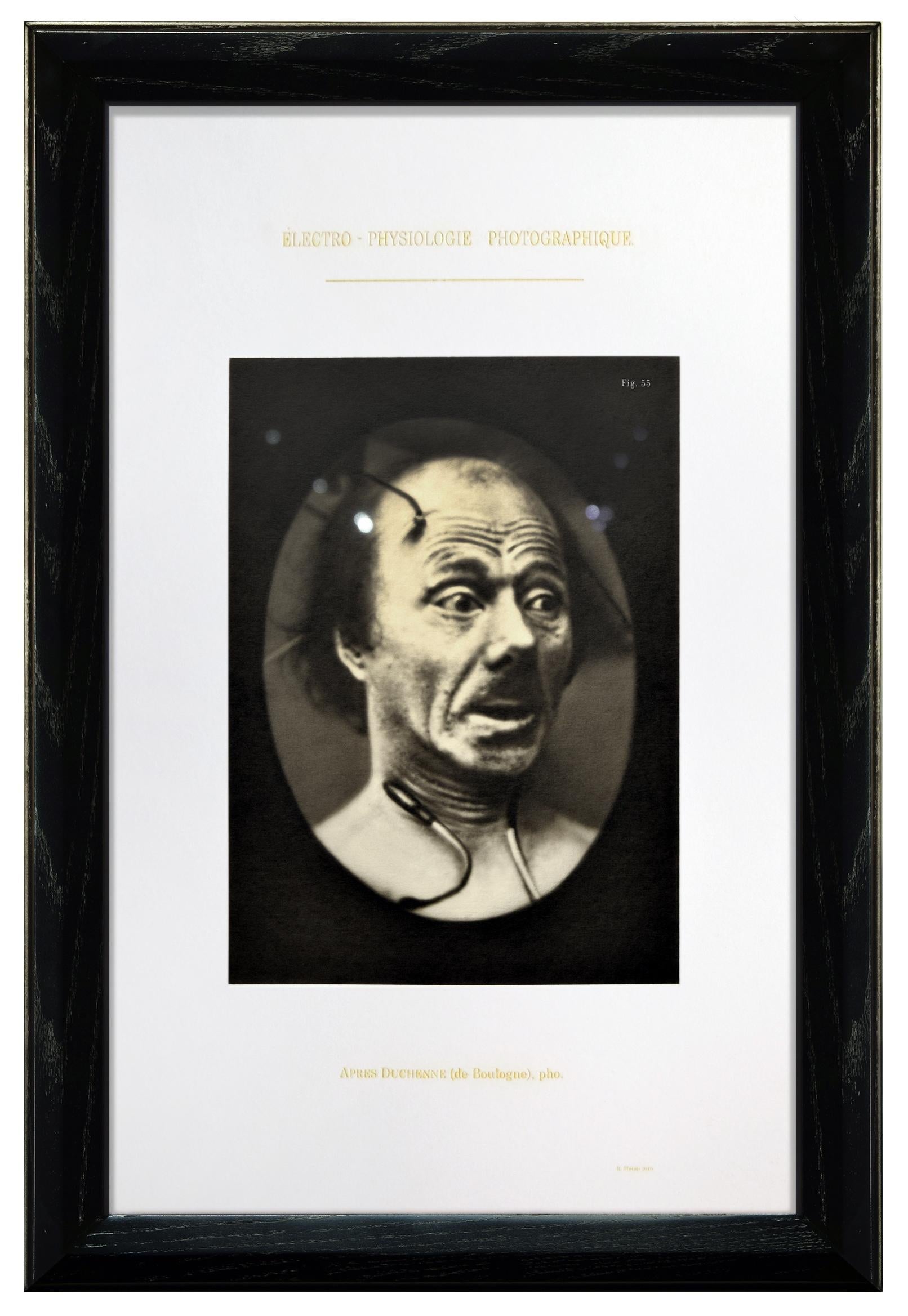 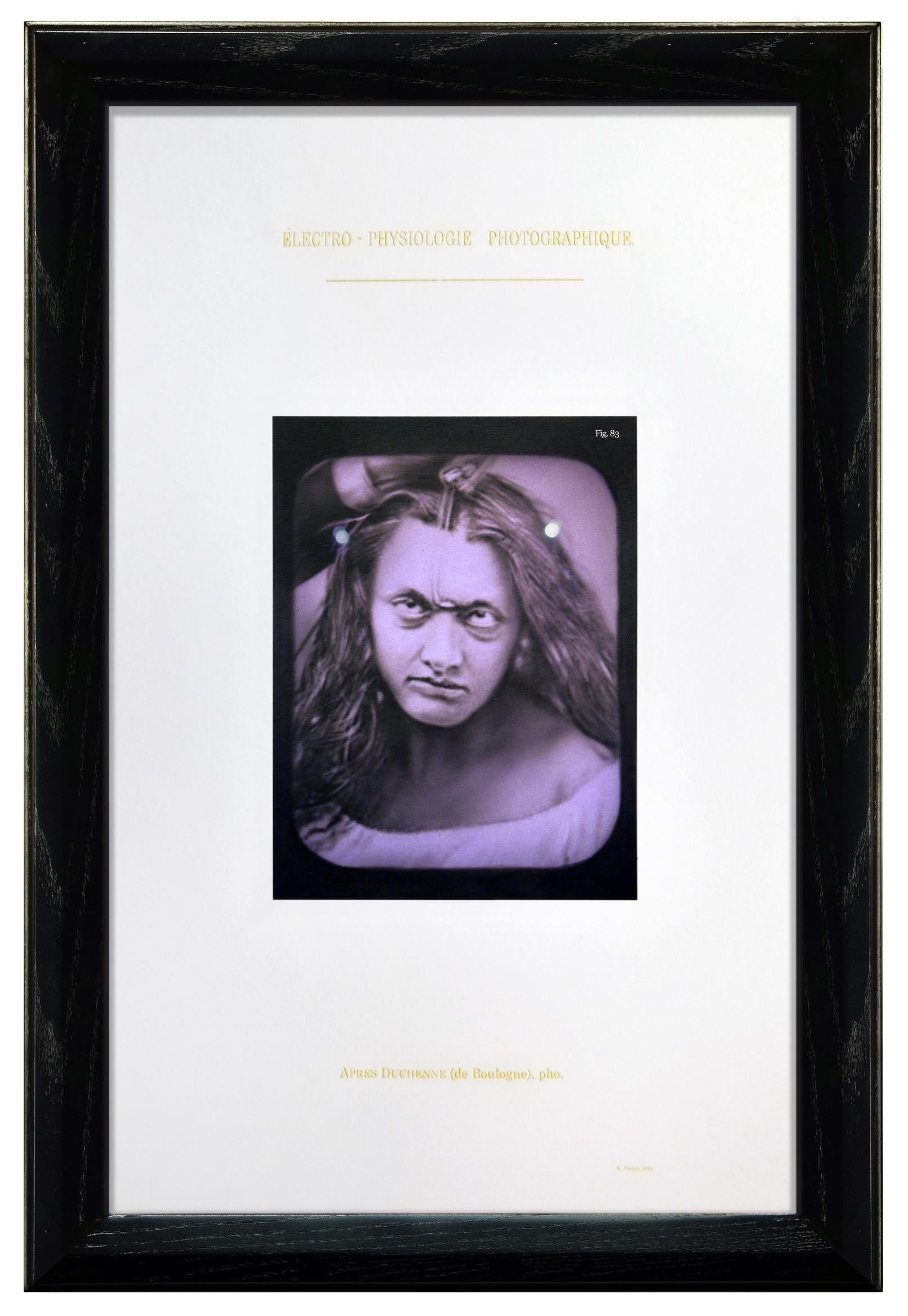 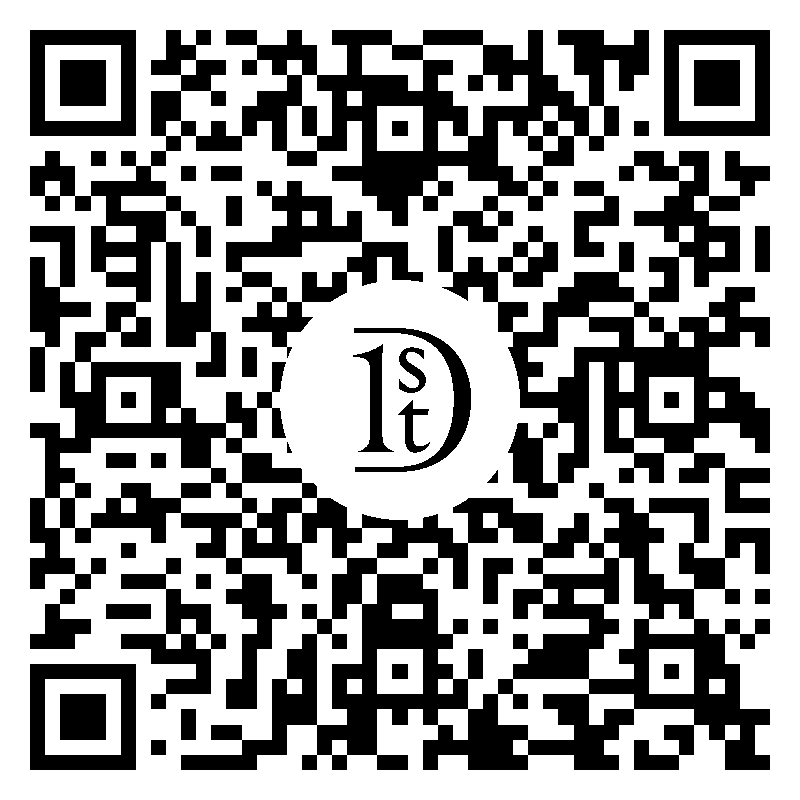 HYPERREALISTIC PAINTING - PHOTOREALISM - HISTORY OF SCIENCE - ELECTRICITY - ELECTRIC SHOCK Full Title: ELECTRO-PHYSIOLOGIE SERIES - FIGURE 63: EXPRESSION OF TERROR (AFTER DE BOULOGNE AND TOURNACHON'S THE WORKINGS OF HUMAN PHYSIOGNOMY) Full List of Materials: India ink and acrylic paint on epoxy resin paper with laser-cut text. Frame made of wood and Plexiglas Finding interest in the difference between seeing and looking, and the way contemporary culture consumes images, Richard Heipp creates photographically and digitally mimetic paintings that intersect with themes of technology, vision, and artistic production. Coining the term ‘photocentric’ to describe his carefully crafted airbrushed paintings, Heipp intends for viewers to initially assume they are looking at digitally or mechanically reproduced images. “Then, only upon astute and close observation, is the true nature of the image revealed,” Heipp states, aiming to subvert assumed notions of craft, production, and perception. He believes this approach produces a profound change in the relationship between the viewer and the object. “I hope my work causes viewers to slow down and really look in order to see.” His most recent body of work from the Museum Studies Series confronts how the interpretation and consumption of artworks and artifacts are affected through layered visual or cultural systems of seeing, their institutional display and ultimately altered by Heipp’s translation into paintings. Heipp has taught painting at the University of Florida for 40 years and will retire from teaching this May to concentrate on his studio practice. He served as the Director of the School of Art and Art History from 2010 to 2015. Heipp has an extensive national exhibition record including over twenty-five thirty solo exhibitions at museums and galleries. His paintings and installations are included in numerous public and private collections nationally including the Jacksonville Museum of Contemporary Art, the Harn Museum of Art, Polk Museum, the Progressive Companies, Miami University, and the City of Seattle. Heipp has received six State of Florida, Individual Artist Fellowships, a Southern Arts Federation, National Endowment for the Arts fellowship in painting, and was honored by the Southeastern College Arts Association with the Outstanding Artistic Achievement Award in 2006. In addition, Heipp was honored as the University of Florida’s 2007/08 College of Fine Arts Teacher of the Year, was awarded a Research Foundation Professorship in 2015, and was made a Professor Emeritus in 2021.

1stDibs Buyer Protection Guaranteed
If your item arrives not as described, we’ll work with you and the seller to make it right. Learn more
About the Seller
5 / 5
Located in Seattle, WA
Gold Seller
These expertly vetted sellers are highly rated and consistently exceed customer expectations.
Established in 2012
1stDibs seller since 2014
23 sales on 1stDibs
Typical response time: 3 hours
More From This Seller

Homage to Dali - Hyperrealism Ink Drawing
By Olilet
Located in New York, NY
This hyper realist drawing by Olilet is part of her new hyper realist series of still life pieces. It is done by ink on 300 gr. Arches paper. It is a Homage to one of her greatest in...
Category

$600
Eton Boy (Sitting), Mixed media on Pergamenata parchment
Located in London, GB
Howard Tangye (b.1948, Australia) has been an influential force in fashion for decades. Lecturing at London’s Central Saint Martins for 35 years, including 16 years as head of BA Wom...
Category

$300
Dante
By Peter Hoffer
Located in Paris, France
Acrylic and epoxy on board. Hoffer's contemporary paintings have been described as being as much about studio materials and techniques as the subjects they convey. He begins his pai...
Category

$5,550
Montpellier
By Peter Hoffer
Located in Paris, France
Acrylic and epoxy on board. Hoffer's contemporary paintings have been described as being as much about studio materials and techniques as the subjects they convey. He begins his pai...
Category

$6,750
Portrait 2
By Peter Hoffer
Located in Paris, France
Acrylic and epoxy on board
Category