Items Similar to Lady playing with Yellow Butterfly, Watercolour & Ink on Paper, Brown "In Stock"
Ole Aakjær - Art Is The Only Truth. Everything Else Is A Lie. Even You And Me. & This Message 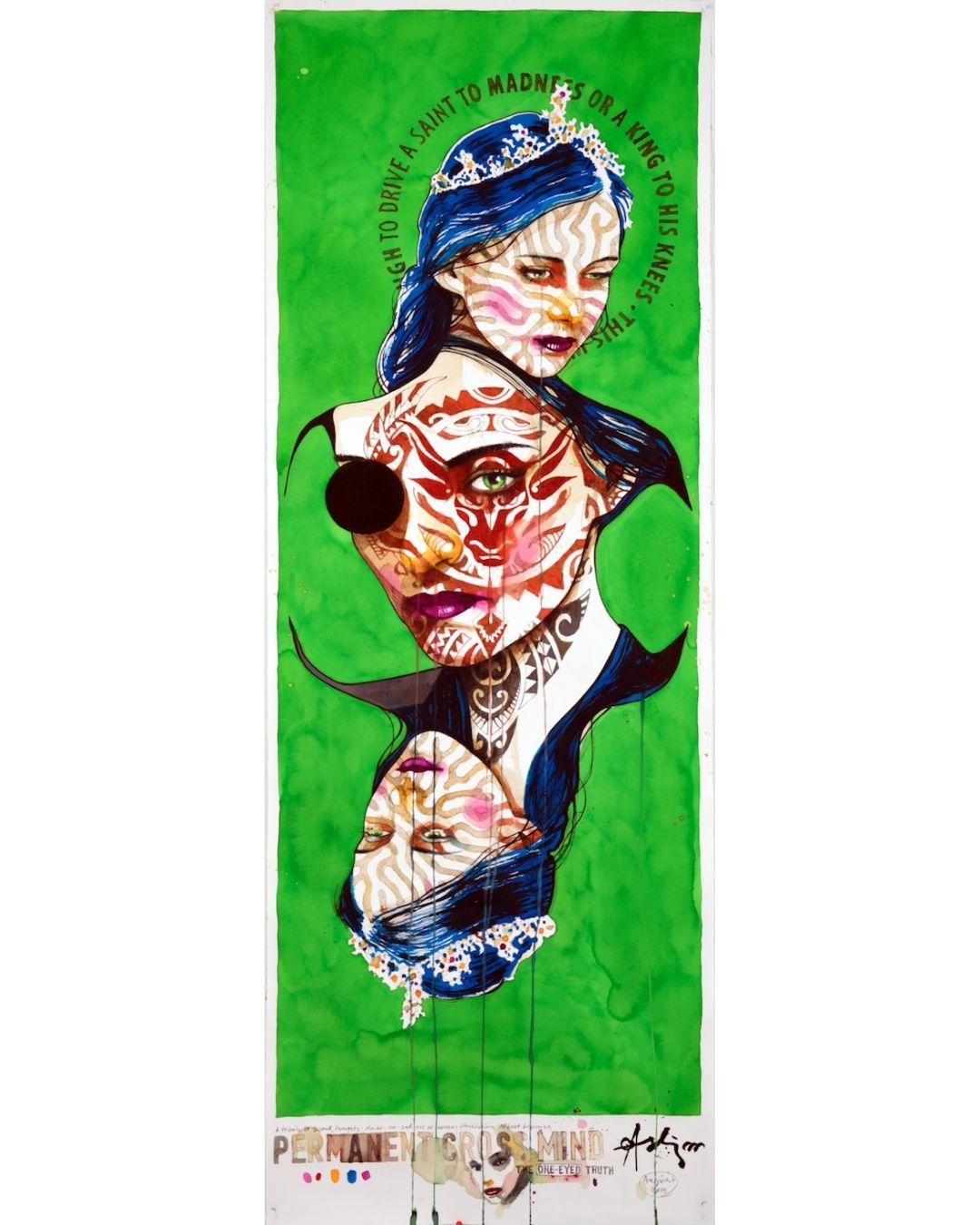 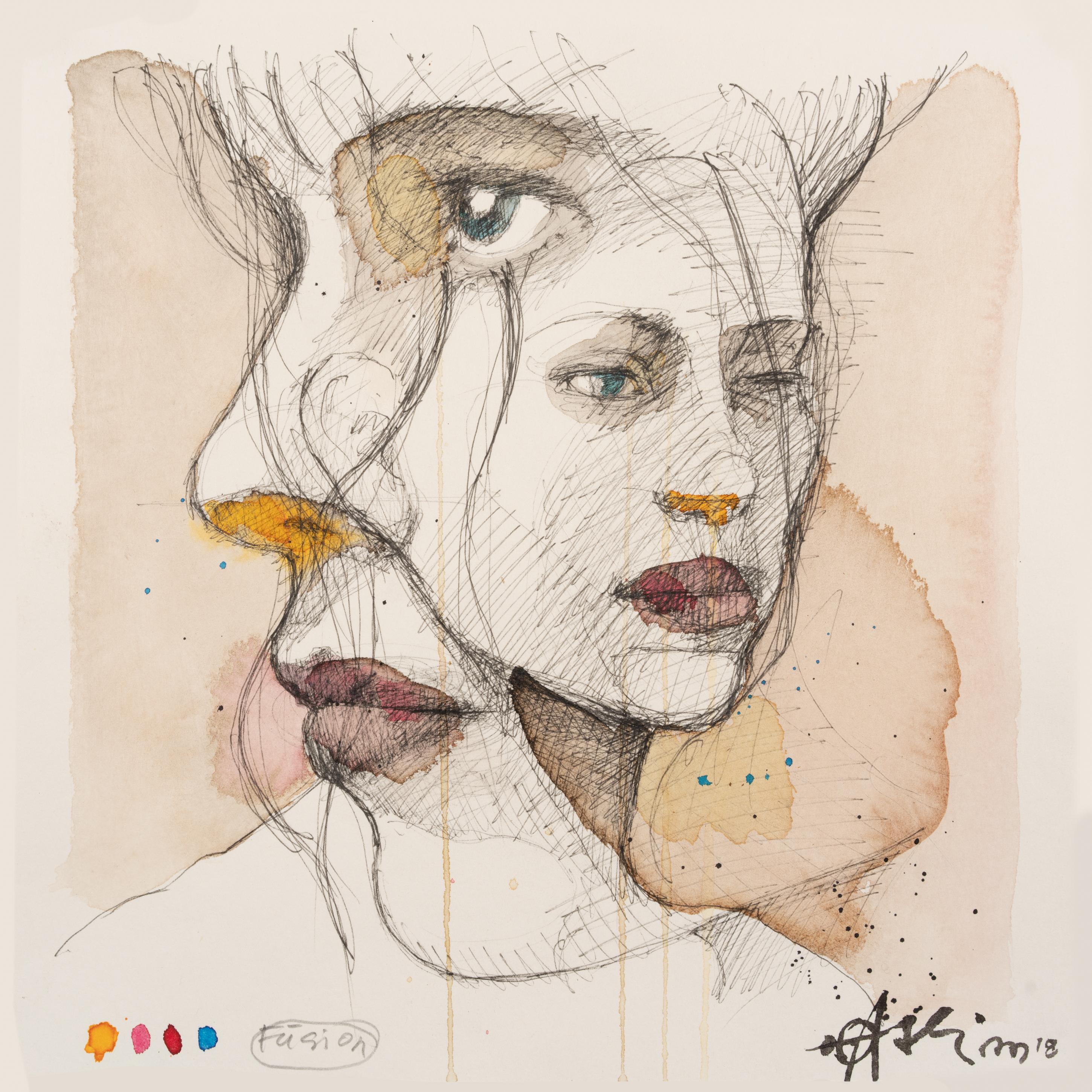 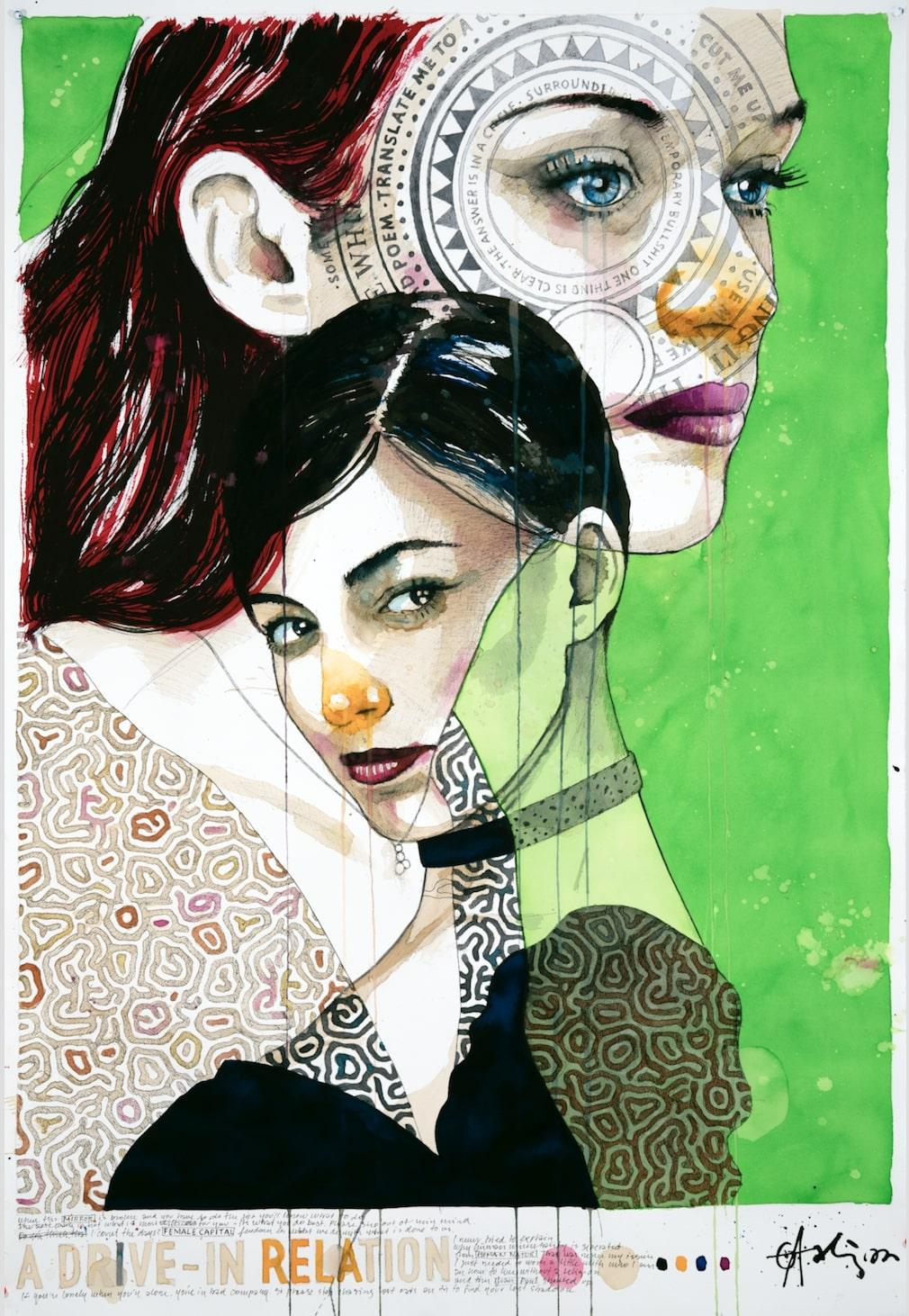 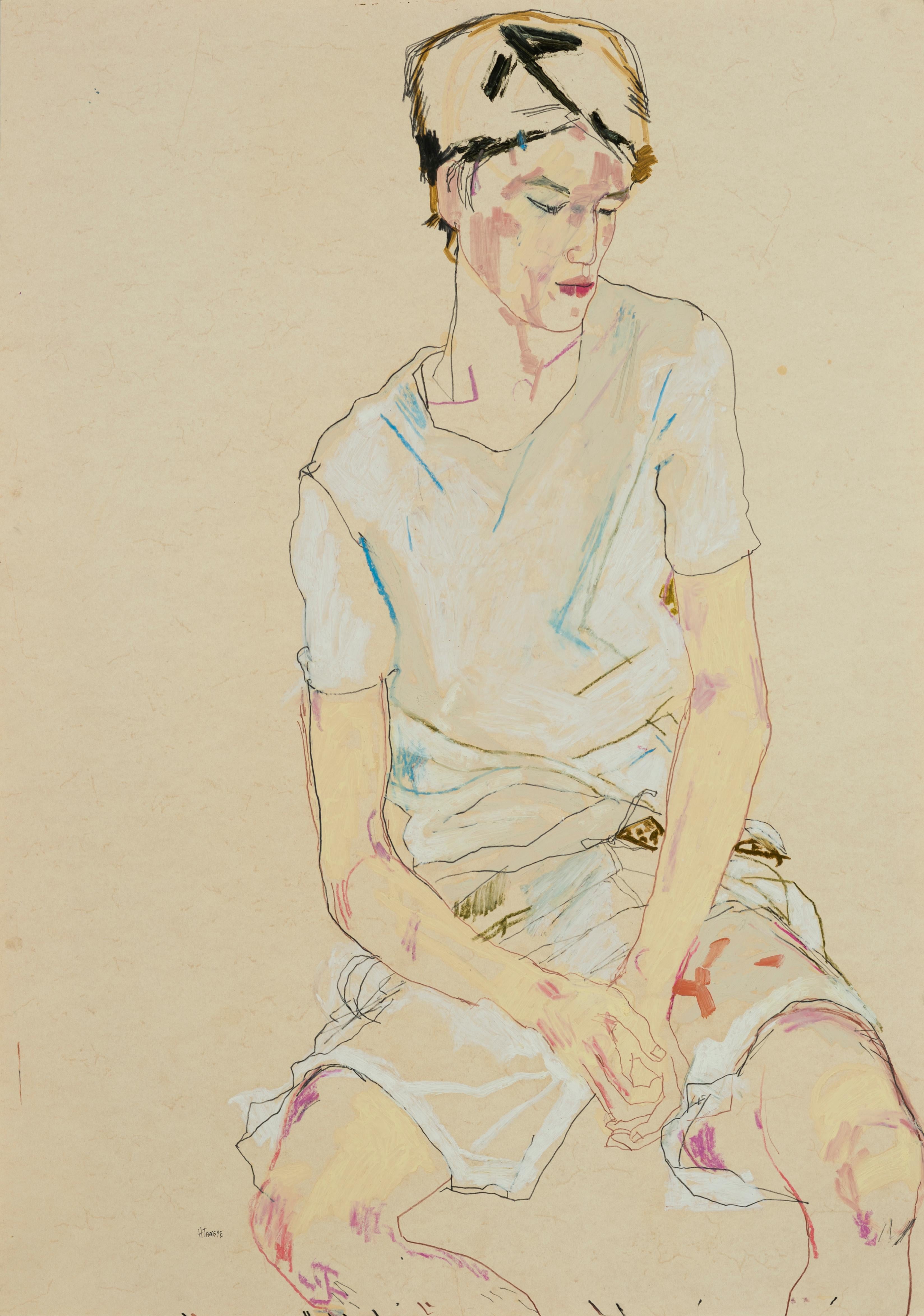 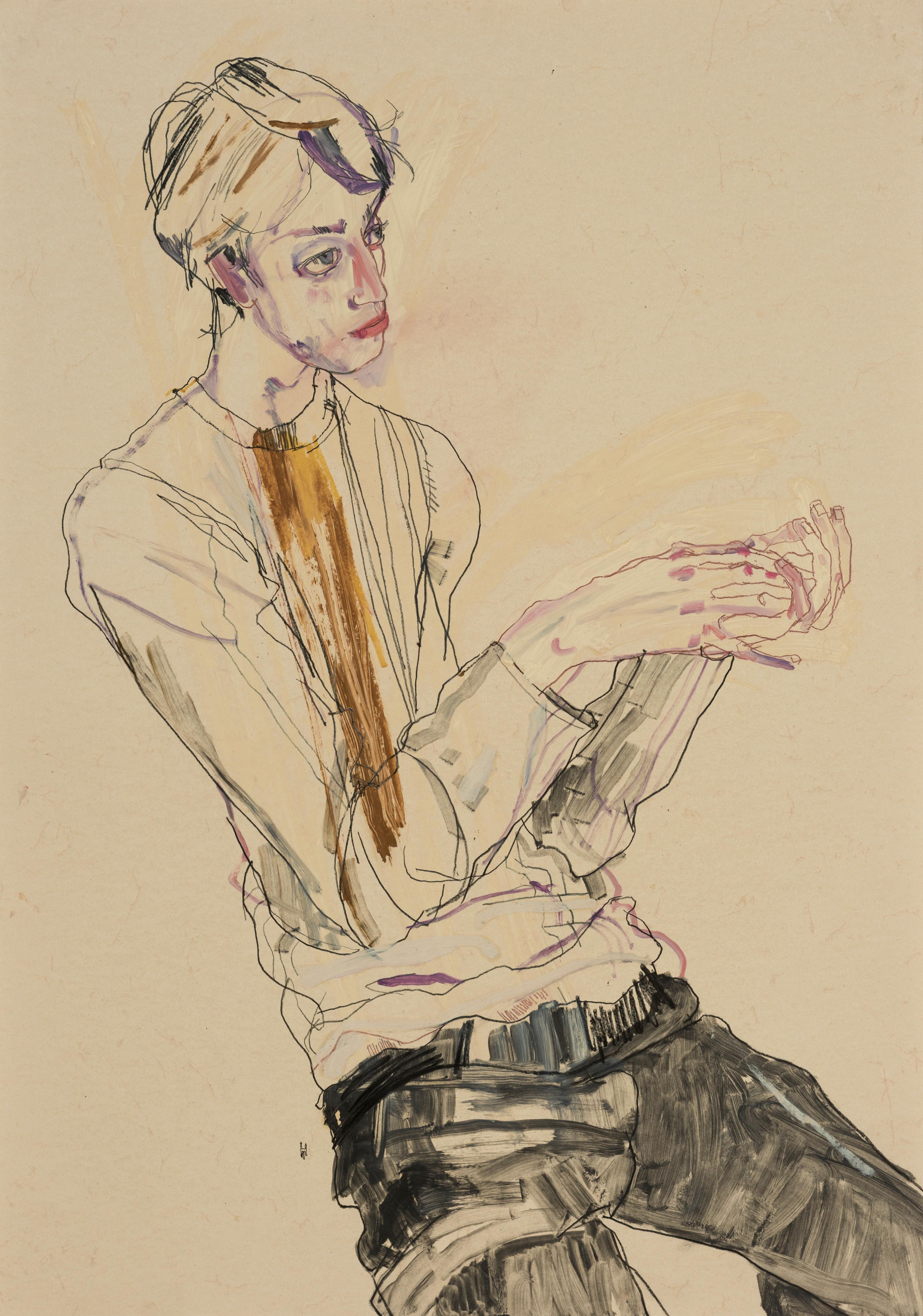 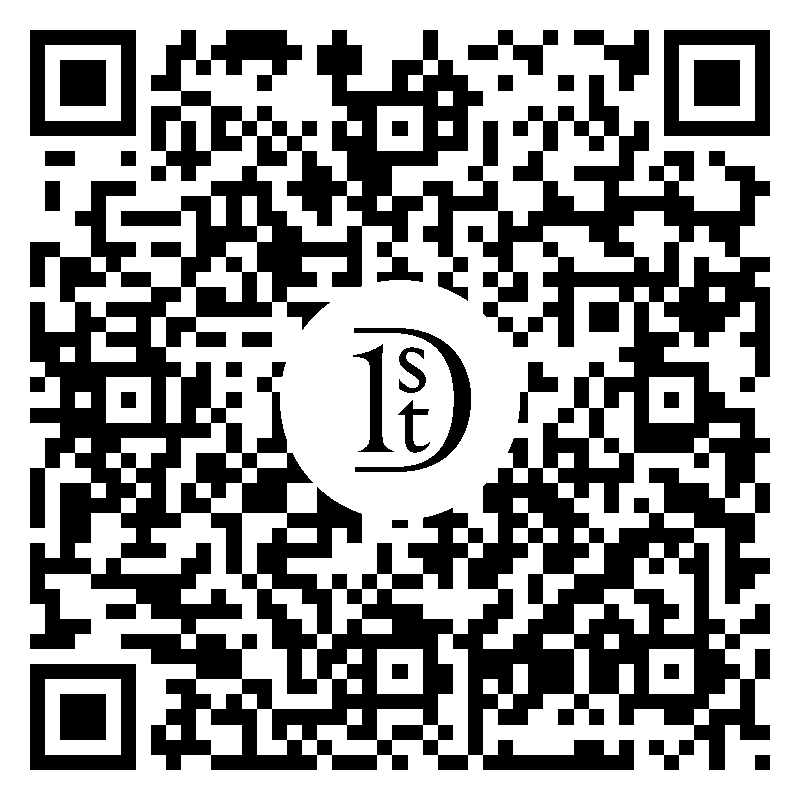 Sanjay Bhattacharya - Untitled - 30 x 22 inches (unframed size) Watercolour & Ink on Paper Inclusive of shipment in roll form. Style : Sanjay's first inspiration was the Phantom. Yes, the phantom of those famous Phantom comics. "I used to draw Phantom everywhere, on the walls, on the doors," he says. But Sanjay---- one of the most gifted students of realist painter Bikash Bhattacharya --- has moved quite far from the realms of fantasy. Sanjay's figurative images are quite close to those found in the works of the Dutch realist painters or the French 18th century painters. Either oil paintings or watercolours, what has really inspired most of Sanjay's works are the inner and outer realities evoked by architectural elements. Like old, vacant houses. "They are of great interest to me. They tell me stories of people who lived there, who loved there, or fought there. There is a lot of colour and texture in their decaying walls, if only we took the trouble of seeing them." So, in some of his works, we find dark bedrooms with old style table, dressing table, chairs, part of a four poster, or bedstead with massive, ornately carved head-board set against bright sunlight coming in through open windows. It's not just empty houses that Sanjay has painted. He has also painted lived in houses. He has painted a mother combing her daughters' hair; the family silver locked inside the cupboard or the kitchen with its beautiful pots and pans. A lot of his paintings are of the lower middle class families, who are not really heartbreakingly poor, but almost on the edge. Along with homes and families, Sanjay's work consists of realistic portraiture. Like the exhibition he did on late Prime Minister Rajiv Gandhi's portraits. There are no larger than life images here. The interiors against which he has painted Gandhi are untelling and cryptic behind their dark brown layers. Besides homes and portraits, Sanjay's paintings are all about Calcutta. His total involvement with the streets of Calcutta comes through on his canvas. There is Calcutta decaying, Calcutta the city of dilapidated palaces of the 19th century rich, Calcutta of the faded British grandeur. About the Artist & his work : Born : 1958 in Kolkata. Education : 1982 - Diploma in Art from Government College of Arts and Crafts, Kolkata. Art Career : After graduation, Sanjay joined the Clarion Ad agency as an illustrator. Later he joined Hindustan Thomson Associates where he had the freedom to freelance and created a series of watercolors for his first exhibition, based on architecture and still life. Solo Shows & Exhibitions : 1988 : Solo exhibition at Dhoomimal Art Gallery, New Delhi. 1994 : Sanjay showcased ‘Rajiv Gandhi: Landscape of a Man’ at National Gallery of Modern Art in Mumbai and at Jehangir Art Gallery, Mumbai. 2002 : Solo show ‘Painting Beyond Words’ at Arts India, New York. 2012 : 'Emerging Krishna', Religare Arts Initiative, New Delhi. Group Exhibitions : 2013 : 'Edge of Reason- and beyond, into pure creativity', presented by Indian Art Circle at Lalit Kala Akademi, New Delhi 2011 : 'Reprise', Aicon Gallery, New York & 'Masterclass', Dhoomimal Art Gallery, New Delhi. 2010 : 'Holy Now', presented by Religare Arts Initiative, New Delhi at Gallery 27, London ; 'Home and the World', Aicon Gallery, New York & Annual Exhibition, Chawla Art Gallery, New Delhi. 2008 : 'Harvest 2008', organized by Arushi Arts at The Stainless Gallery, New Delhi & 'Mystic Expressions', Visual Art Gallery, New Delhi. 1996 : 'Sanjay Bhattacharya 1981-96',Art Today, New Delhi 1994 : 'Rajiv Gandhi:Landscape of a man',National Gallery of Modern Art(NGMA) and Jehangir Art Gallery, Mumbai 1992 : Jehangir Art Gallery, Mumbai 1991 : Gallarie 88, Kolkata 1989 : Chitrakoot Art Gallery, Kolkata 1988 : Gallery Aurobindo, New Delhi. Awards : 1981, 82, 83 & 85 : He won awards from National Exhibitions, Calcutta. 1983 & 88 : He participated in All India Watercolour Exhibitions at AIFACS and won awards. 1988 - 89 : Recipient of an award at Sahitya Kala Parishad Annual Exhibition. 1988 : He won an award at Second International Asian-European Art Biennale in Ankara, Turkey.

1stDibs Buyer Protection Guaranteed
If your item arrives not as described, we’ll work with you and the seller to make it right. Learn More
About the Seller
4.9
Located in Kolkata, India
Vetted Seller
These experienced sellers undergo a comprehensive evaluation by our team of in-house experts.
Established in 2004
1stDibs seller since 2017
84 sales on 1stDibs
Typical response time: 11 hours
More From This Seller

Art Is The Only Truth. Everything Else Is A Lie. Even You And Me. & This Message
By Ole Aakjær
Located in New York, NY
Ole Aakjær (b. 1962) is a Copenhagen-based, internationally-renowned watercolor and ink artist best known for large-format, highly symbolic works that celebrate the power of women. H...
Category

Ole Aakjær
Art Is The Only Truth. Everything Else Is A Lie. Even You And Me. & This Message, 2020

Price Upon Request
Permanent Cross Mind - The One-Eyed Truth
By Ole Aakjær
Located in New York, NY
"The logical answer is not always the right answer. The intelligent solution is not always the cleverest one. The subjective can be just as real as the objective. Some people are cap...
Category

Price Upon Request
A Drive-In Relation
By Ole Aakjær
Located in New York, NY
"People drive all the way into my soul and park their cars and just laugh and shake their heads at the bottom of my lows. They eat all my popcorn and complain about the sound quality...
Category

Price Upon Request
Nobu (Looking Down), Mixed Media on Pergamenata parchment
By Howard Tangye
Located in London, GB
Howard Tangye (b.1948, Australia) has been an influential force in fashion for decades. Lecturing at London’s Central Saint Martins for 35 years, including 16 years as head of BA Wom...
Category

$6,942
Ben Waters (Seated, Hand Holding), Mixed media on Pergamenata parchment
By Howard Tangye
Located in London, GB
Howard Tangye (b.1948, Australia) has been an influential force in fashion for decades. Lecturing at London’s Central Saint Martins for 35 years, including 16 years as head of BA Wom...
Category

$6,942
Tom Cawson (Sitting - Hand on Head), Mixed media on grey cardboard
By Howard Tangye
Located in London, GB
Howard Tangye (b.1948, Australia) has been an influential force in fashion for decades. Lecturing at London’s Central Saint Martins for 35 years, including 16 years as head of BA Wom...
Category

$6,567
Katya (Lying Down), Mixed media on Pergamenata parchment
By Howard Tangye
Located in London, GB
Howard Tangye (b.1948, Australia) has been an influential force in fashion for decades. Lecturing at London’s Central Saint Martins for 35 years, including 16 years as head of BA Wom...
Category