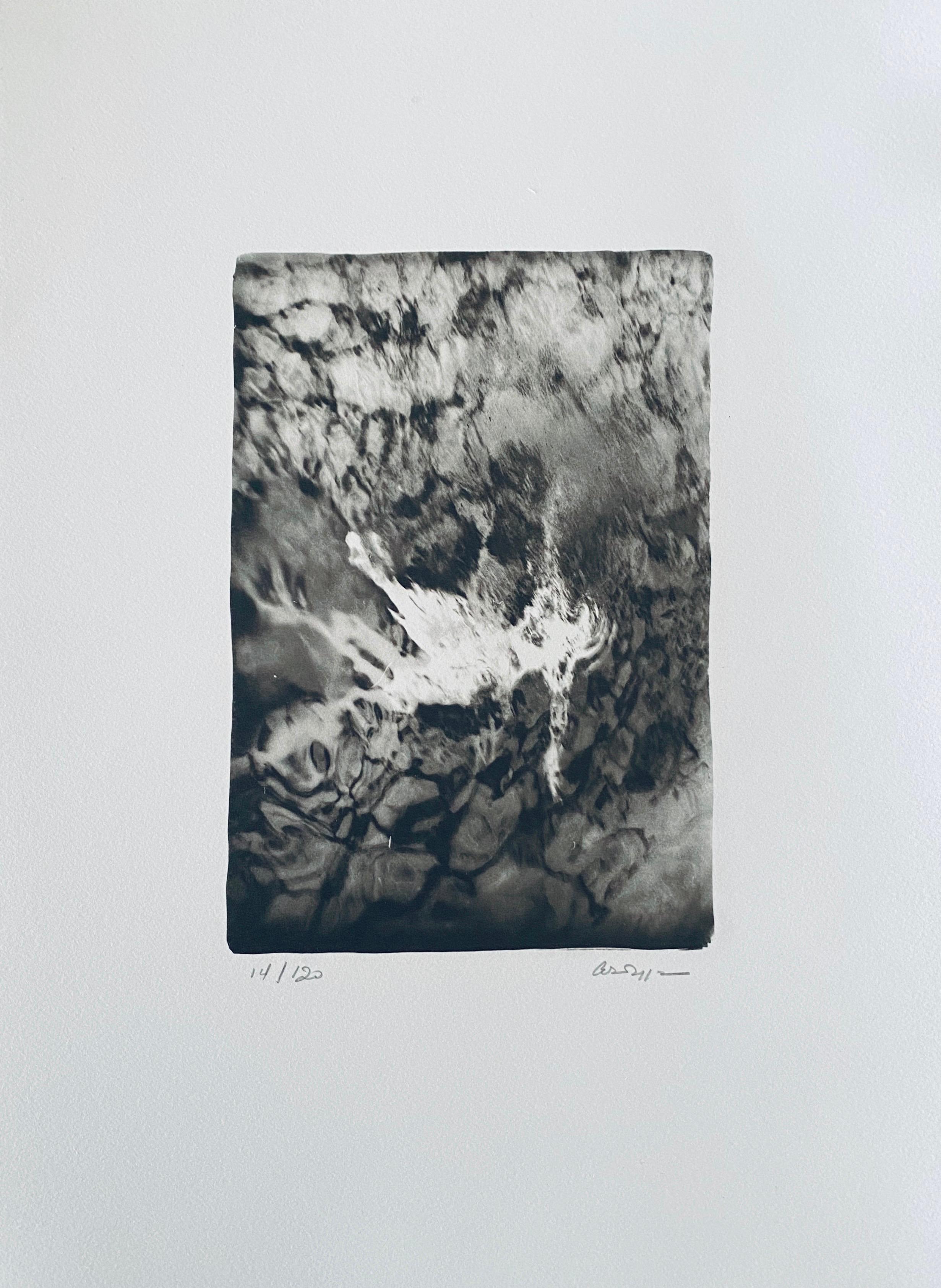 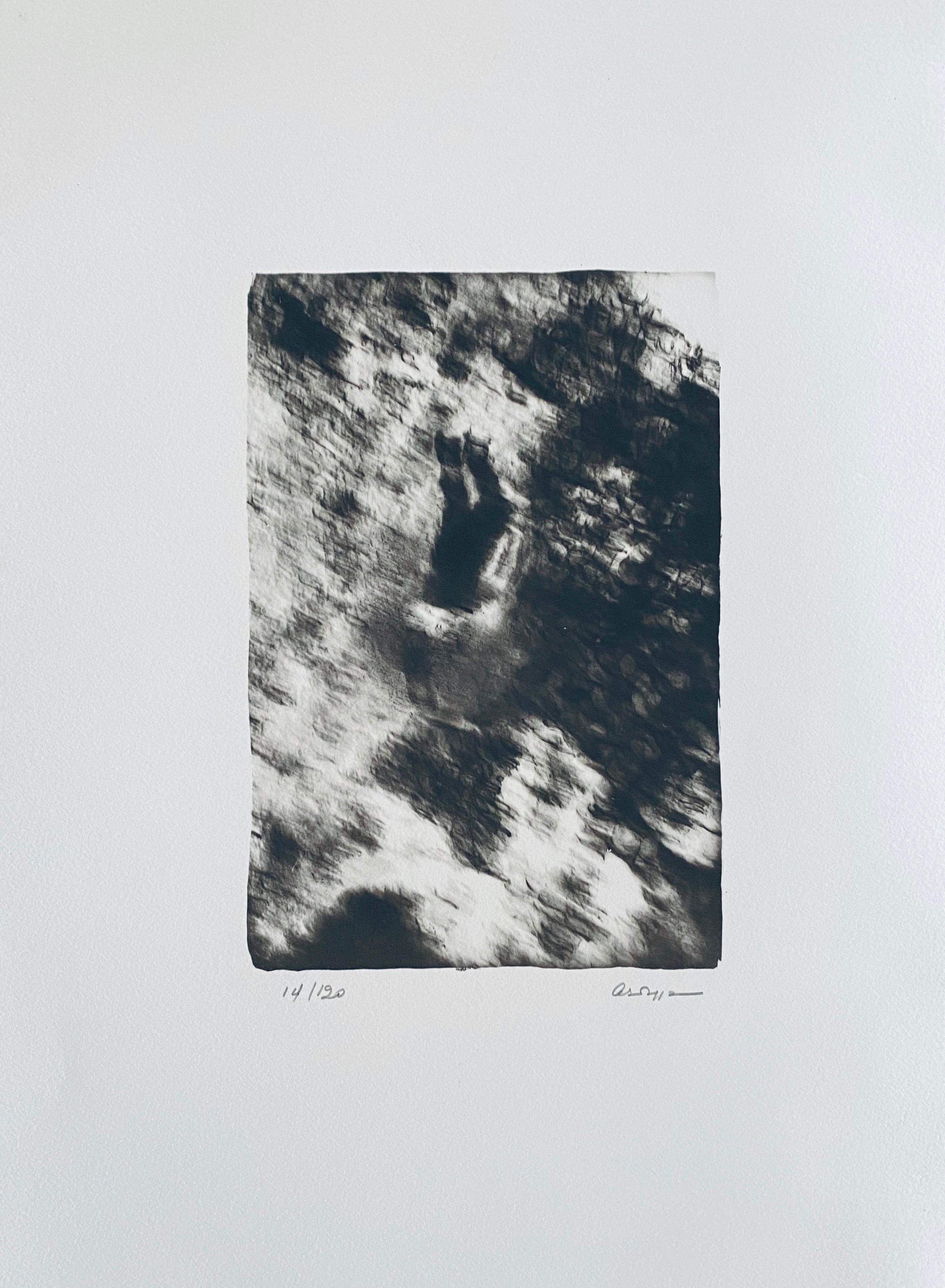 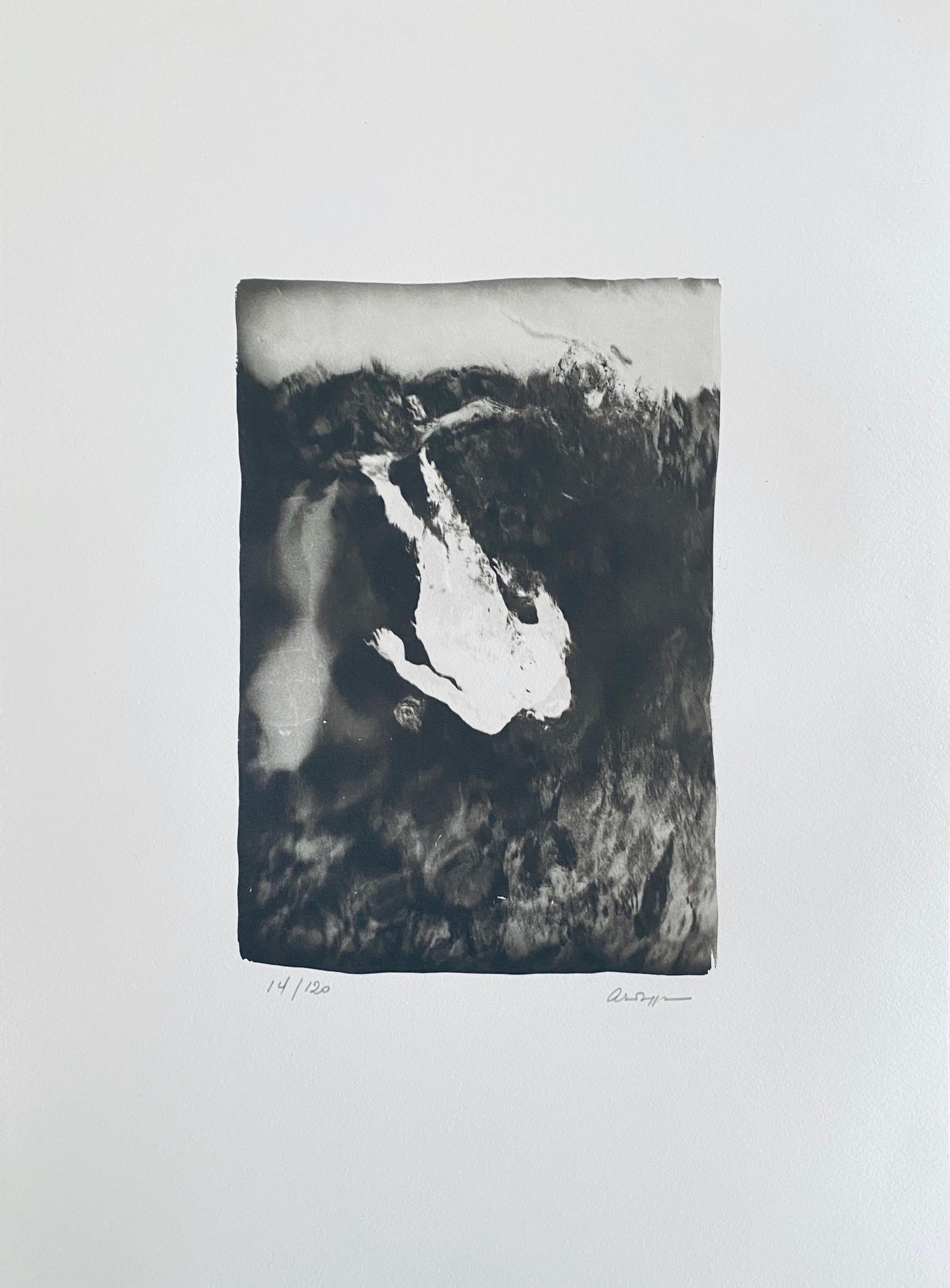 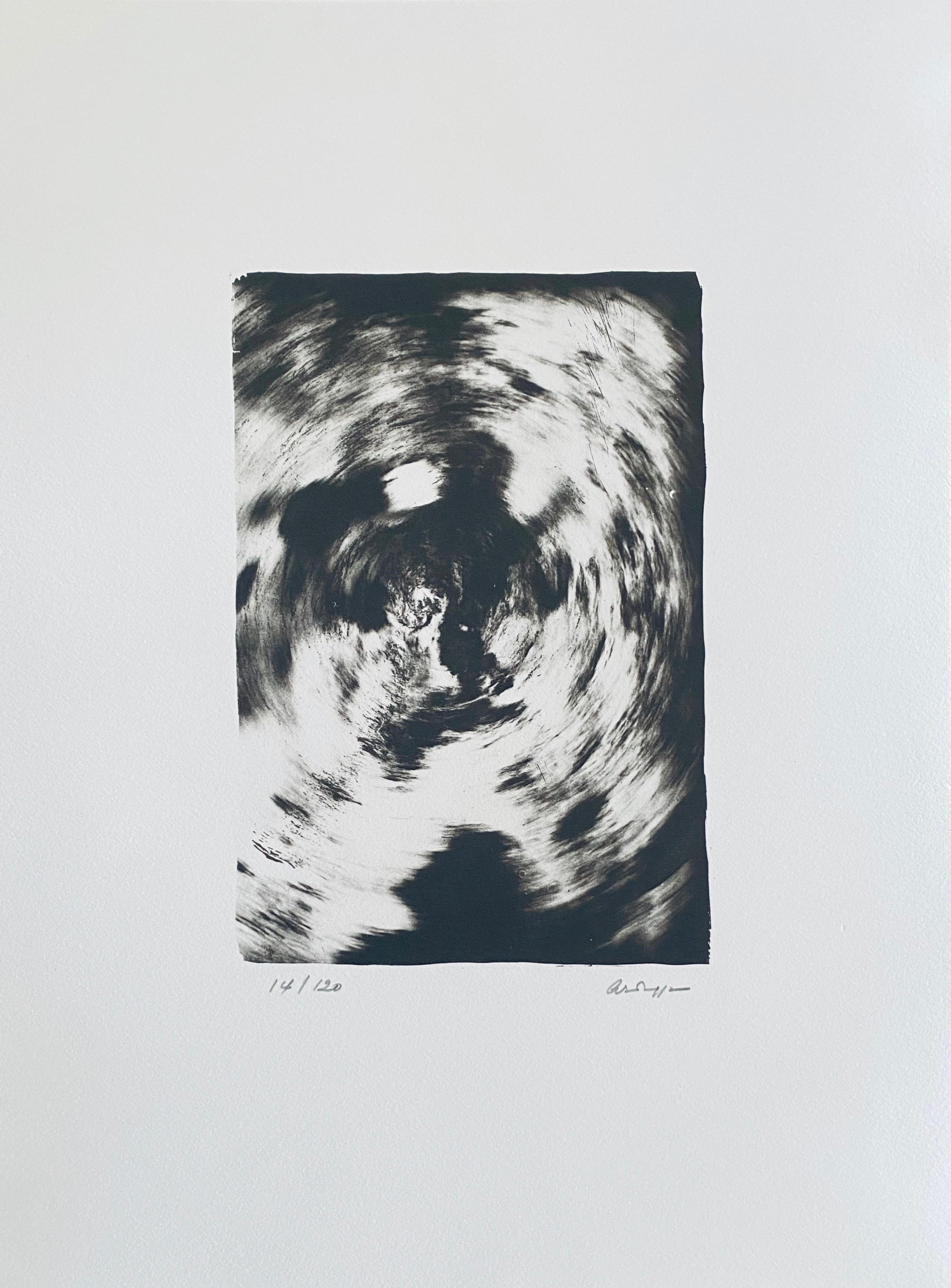 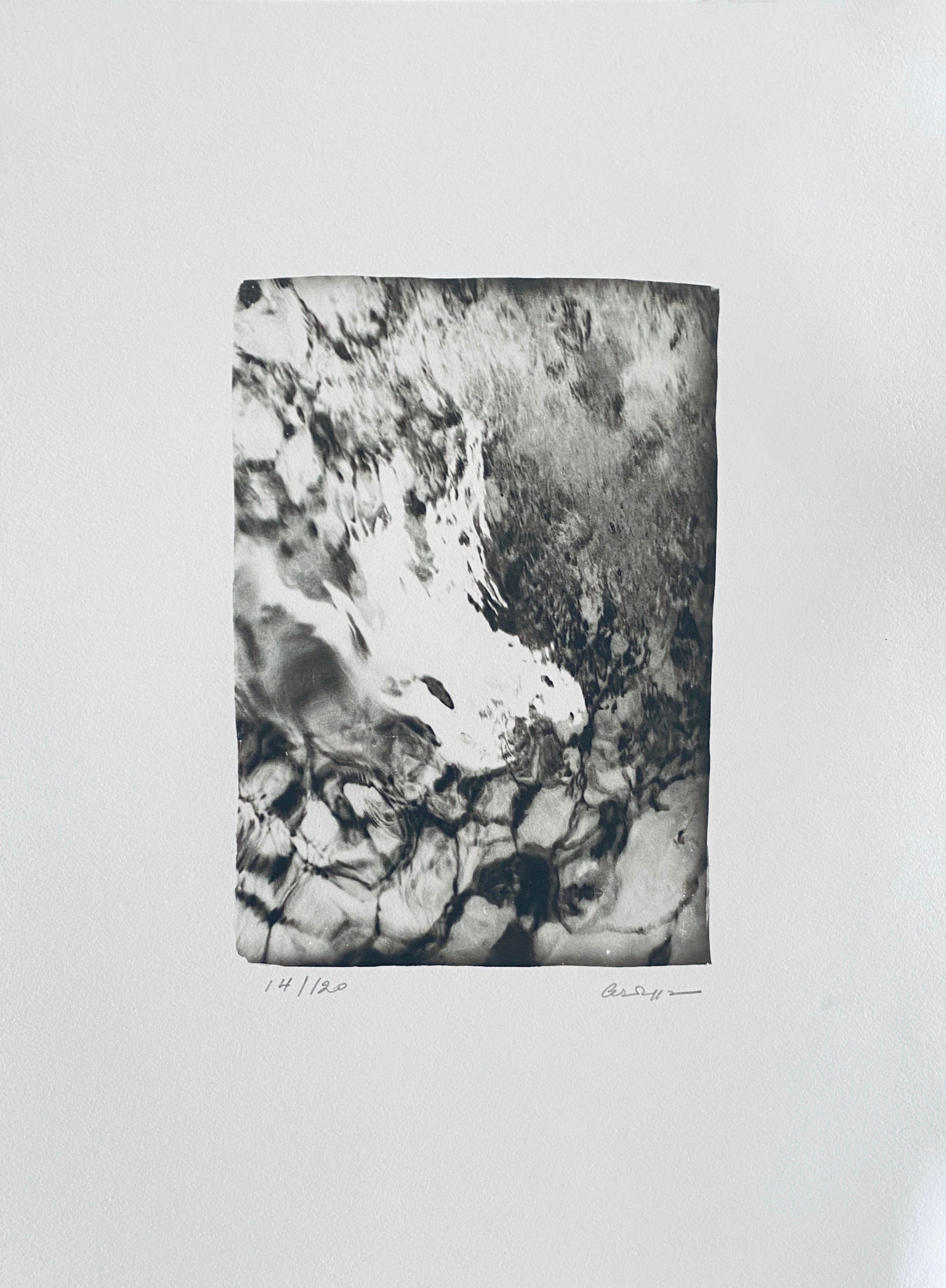 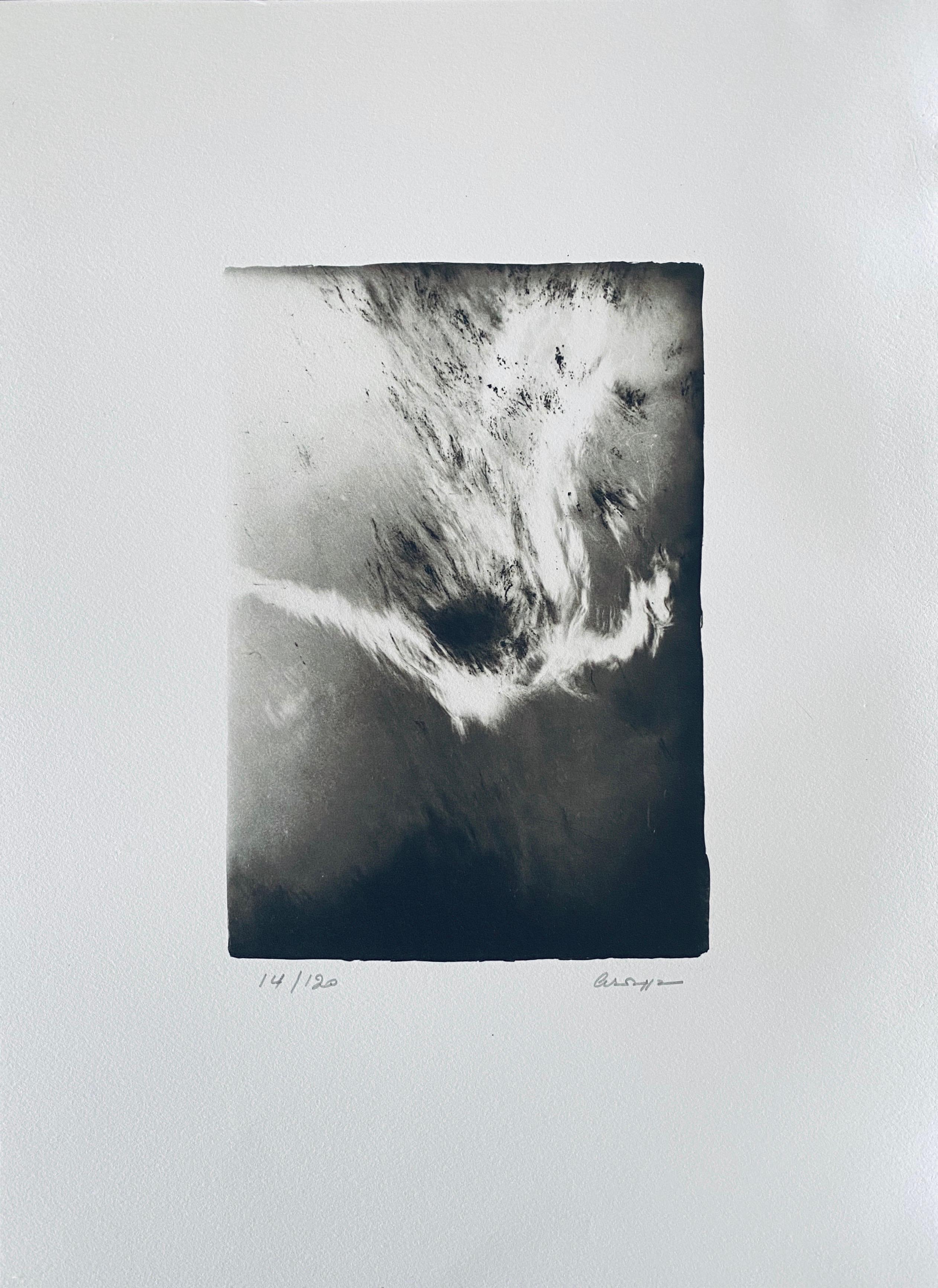 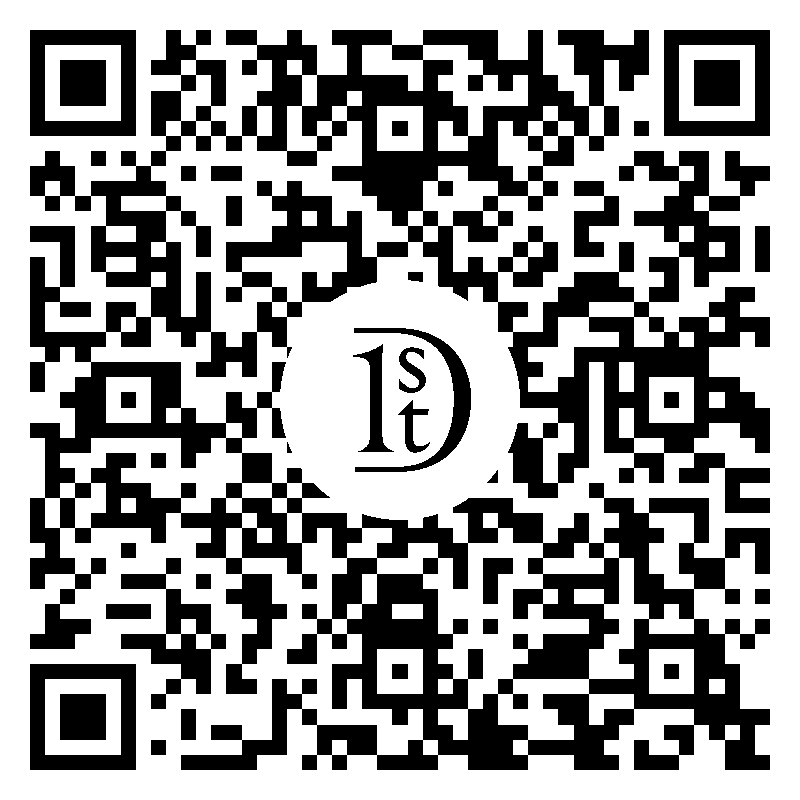 Photos pictured of information cards after the images of the black and white photos are not included. La Chute D'Icare (The Fall of Icarus) is a original, black and white photographic image by the French Photographer André Naggar printed in collotype, Hand signed and numbered by the artist, Limited to 120 copies. The sheet is a large in-quarto, portrait format, of 44 x 32.5 cm (17.6 x 13 in). the photograph format measures 24 x 16 cm (9.6 x 6.4 in.) Collotype printing was invented in France in 1854, it was the first process using a printing press, prior to photogravure, to have been applied successfully to photography. Unlike modern printing methods, collotype produces images unaltered by passing years and renders them in continuous tone, with an infinite range of subtle shades. Using a negative film, the printer applies a coat of bichromated gelatine to a sheet of glass, which is then dried and exposed to the image. The gelatine surface hardens in proportion to the amount of light received through the negative. This matrix plate will then receive the ink as does a lithographic stone. Each black and white image has required three to four delicate over-printings of the ink roller in nuanced shades of translucent black. The master-printer controls the application of the special inks by hand and the result is one of remarkable depth and delicacy of tone; his close collaboration and shared sensitivity with the artist are crucial in creating a work of art which expresses the artist's emotions. Very few printers still practise this fine-grain printing process. With their two nineteenth-century presses, Michel Bertrand and Patrice Forest at the atelier ITEM in Paris, are now reviving this largely forgotten technique. André Naggar, born 1922 in Alexandria, Egypt. French Jewish contemporary artist and photographer. Naggar studied painting and won photography competitions. In 1941 he began working on the Cairo Stock Exchange, of which his father is president as a stockbroker. After the creation of the State of Israel André was forced in 1952 to precipitously abandon Cairo. He left Egypt and settled in Paris, France. His great passion remained art. He established friendships with illustrious artistic figures: Marie Helena Vieira da Silva, Roger Bissiere, Hans Hartung, Serge Poliakoff, and continued to paint, often inspired by the tragedy of the Shoah. He painted in an abstract expressionist style. In 1965 he exhibited his paintings at the Galerie Berggruen in Paris. That same year, while on vacation in Dax, Naggar took his first "moving", blurred photo while passing the Tour de France bicycle race. His deliberately fuzzy photographs, and his original research in the technique gave him a special place in contemporary creation. He has exhibited in New York, the Musée Courbet à Ornans, and the Bibliothèque Nationale de France à Paris, Centre Georges-Pompidou, Paris; Jerusalem Theater Foyer, Trianon de Bagatelle, Paris, Galerie Patrick Perrin, Paris (1988), Ballets of Monte Carlo. RÉCITS INSTANTANÉS, Carole Naggar, André Naggar, Edouard Boubat, William Betsch, Henri Cartier-Bresson, Bruce Davidson, Sophie Ristelhueber and Sabine Weiss. As the French photographer André Naggar said: "I photograph not the dancer but the dance, not a bird but its flight, not a horse but the race".

1stDibs Buyer Protection Guaranteed
If your item arrives not as described, we’ll work with you and the seller to make it right. Learn more
About the Seller
4.9 / 5
Located in Bal Harbour, FL
Platinum Seller
These expertly vetted sellers are 1stDibs' most experienced sellers and are rated highest by our customers.
Established in 1995
1stDibs seller since 2014
1,030 sales on 1stDibs
Typical response time: 1 hour
More From This Seller

$5,000
The Kiss, Grand Central Station, New York, Black and White Photography 1950s
By Ernst Haas
Located in New york, NY
Haas captured a couple at Grand Central Station in New York City, embracing as if nothing else mattered. A moment of intimacy between two people - is it a “goodbye” or a “welcome hom...
Category

$7,000
Office Party, New York, Limited Ed Black and White Dance Party Photo 1960s
By Leonard Freed
Located in New york, NY
Office Party by Leonard Freed is a 13" x 19" limited-edition photograph. The print #3 of an edition of 5 is signed verso (back of photo) by Brigitte Freed (wife of the photographer) ...
Category

$1,500
Office Party, New York City, Black and White Photography 1960s Dance Party
By Leonard Freed
Located in New york, NY
Office Party, 1966 by Leonard Freed is limited edition print #3 of 5, a 9" x 13" print signed verso (on back of photo) by the estate's Brigitte Freed (wife of the photographer), with...
Category