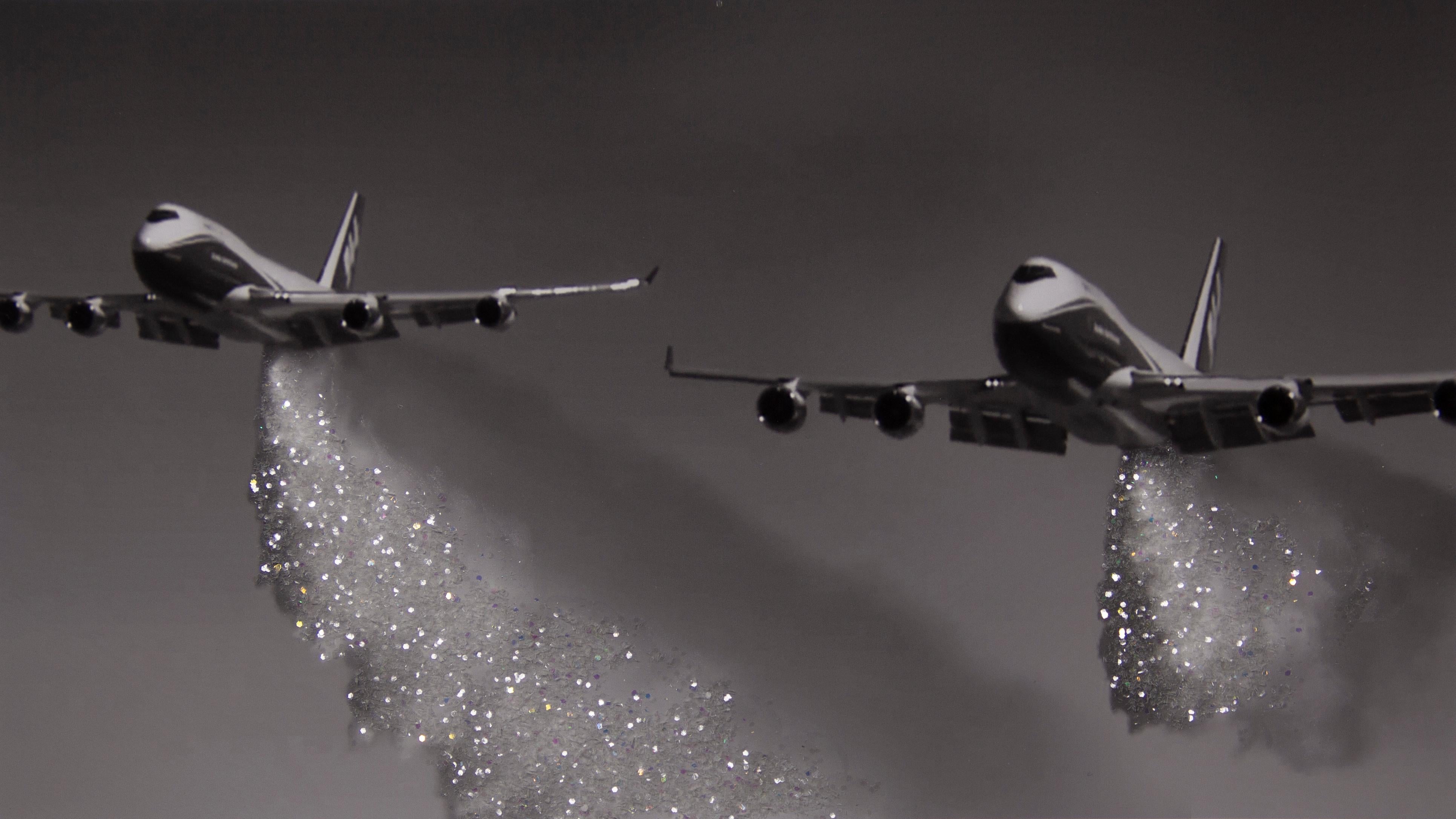 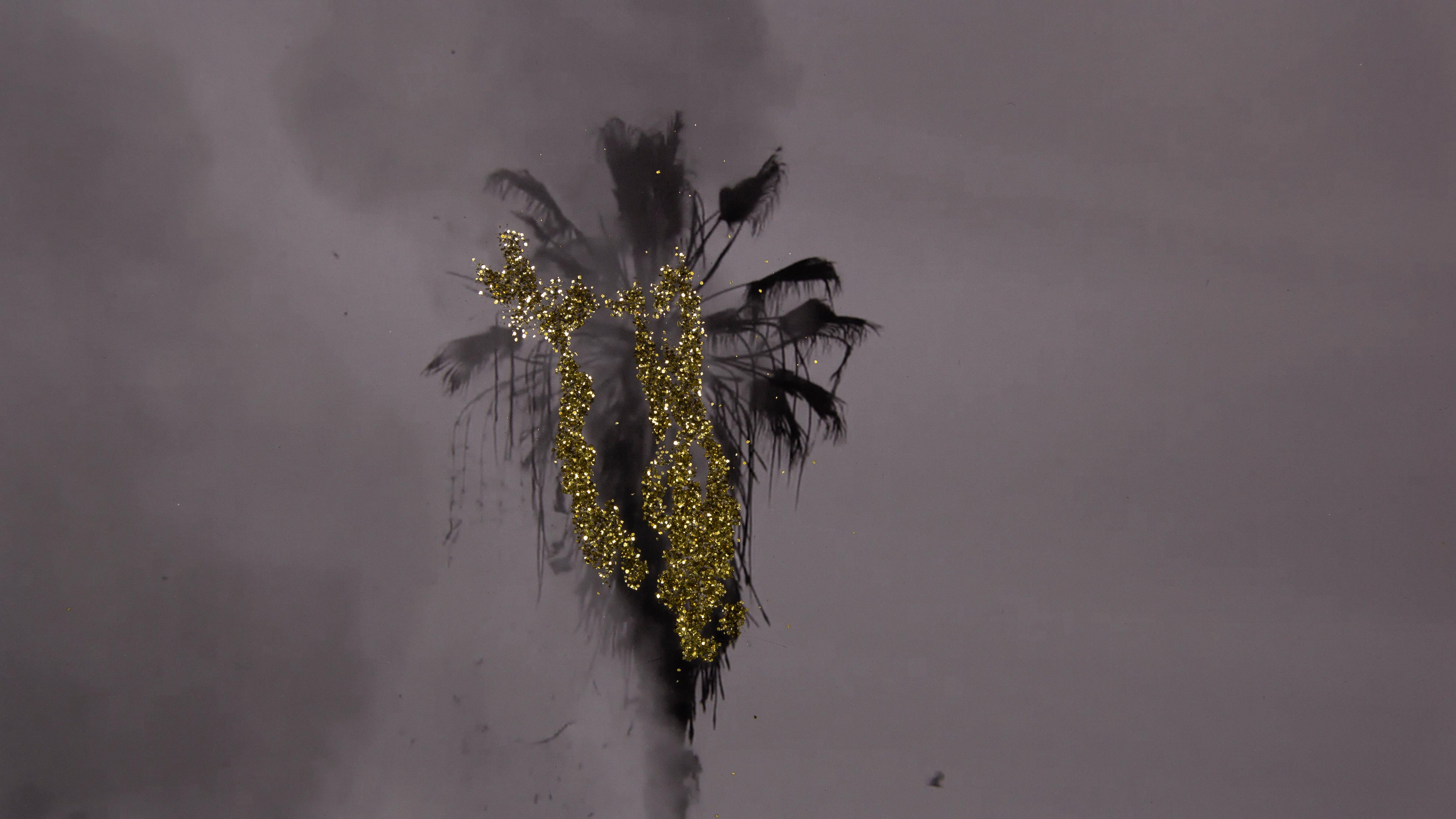 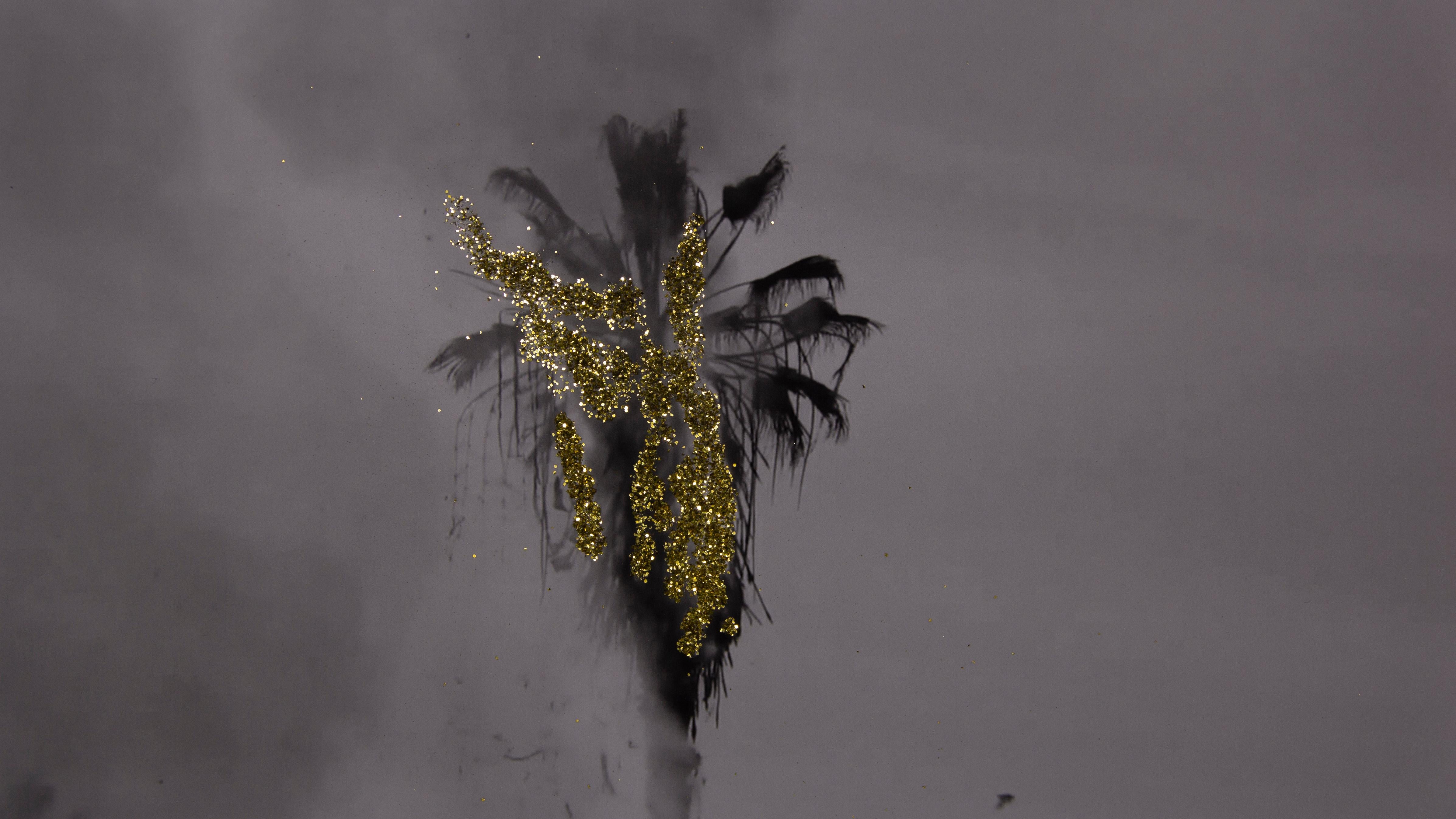 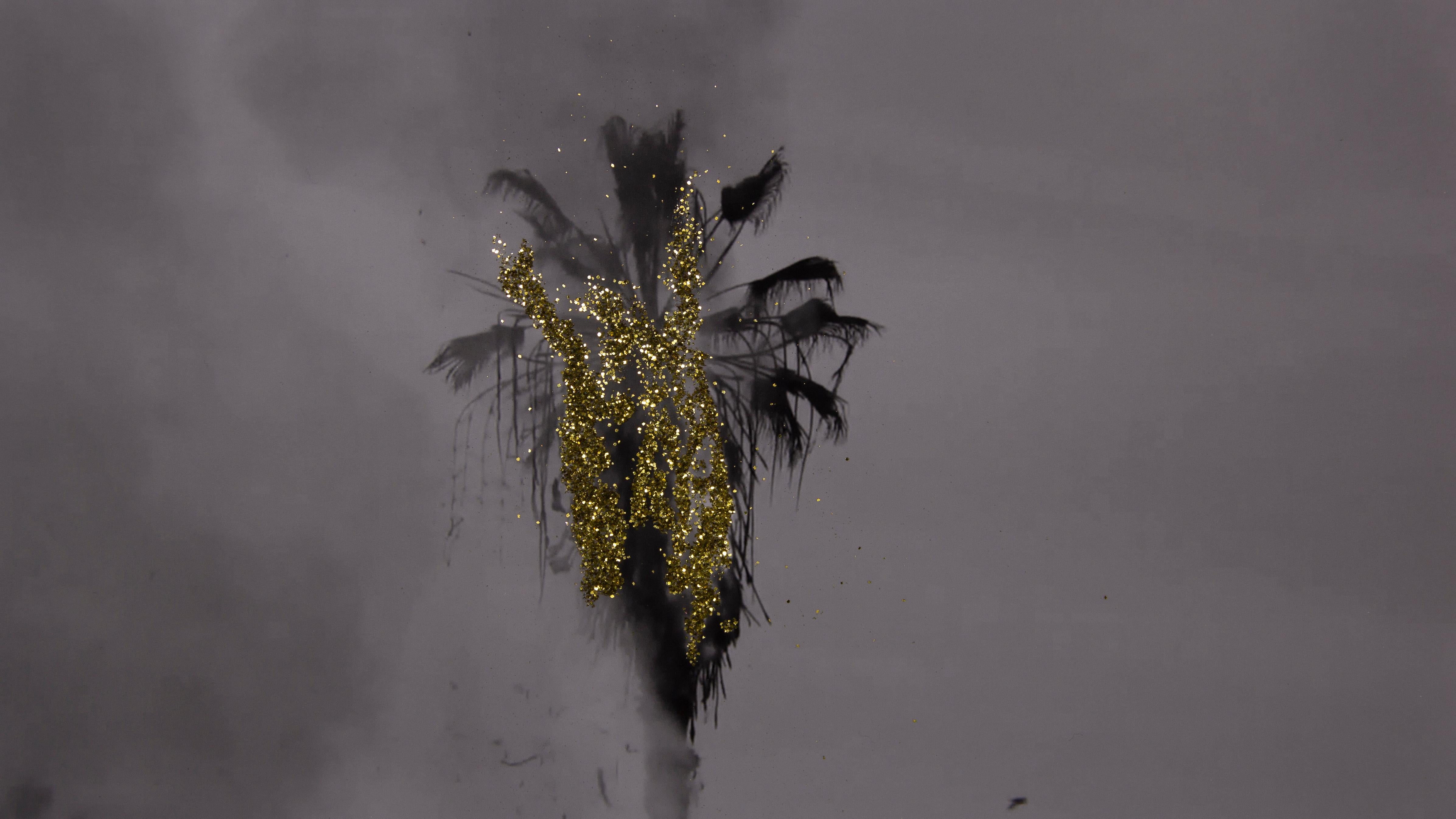 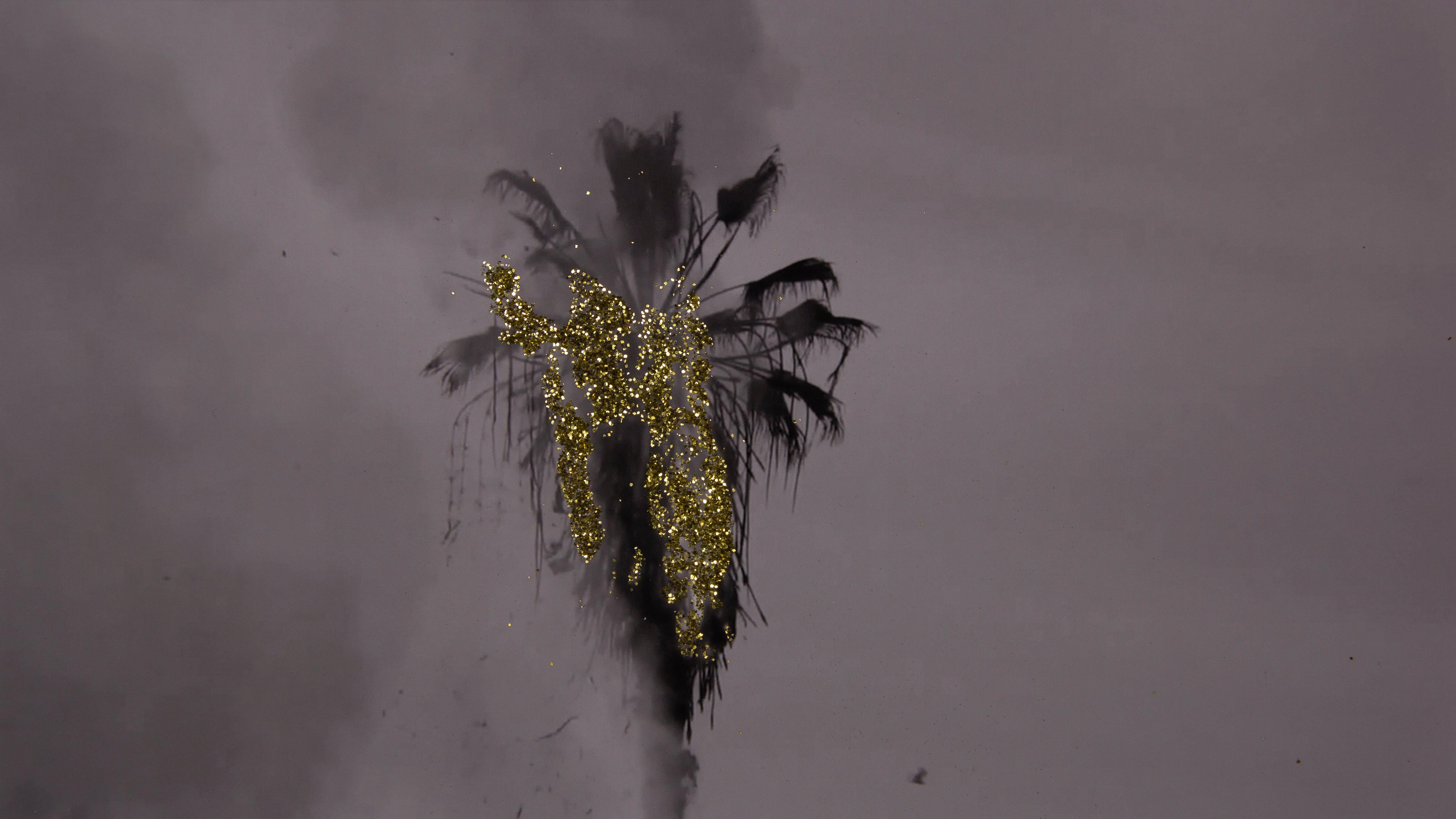 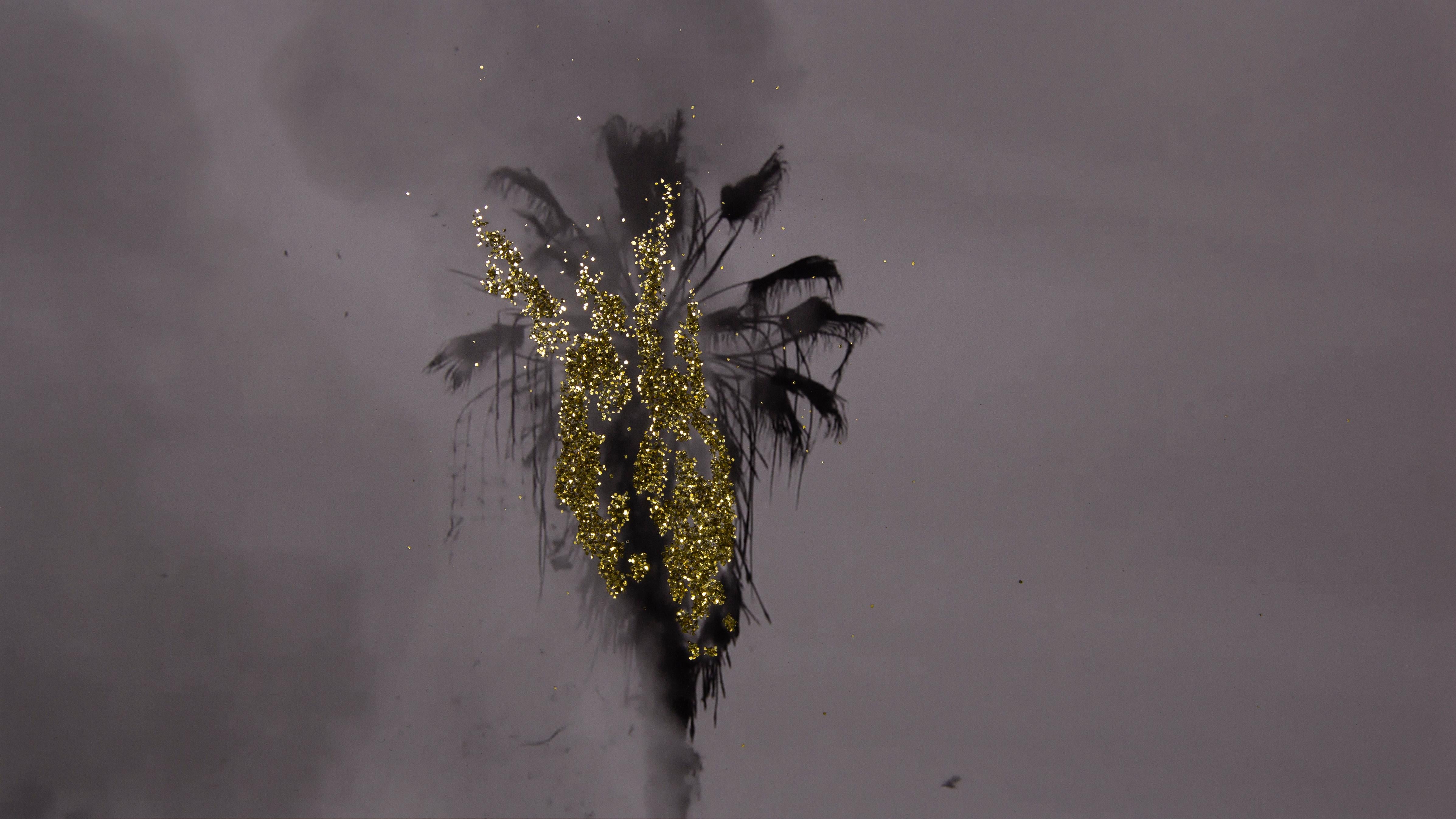 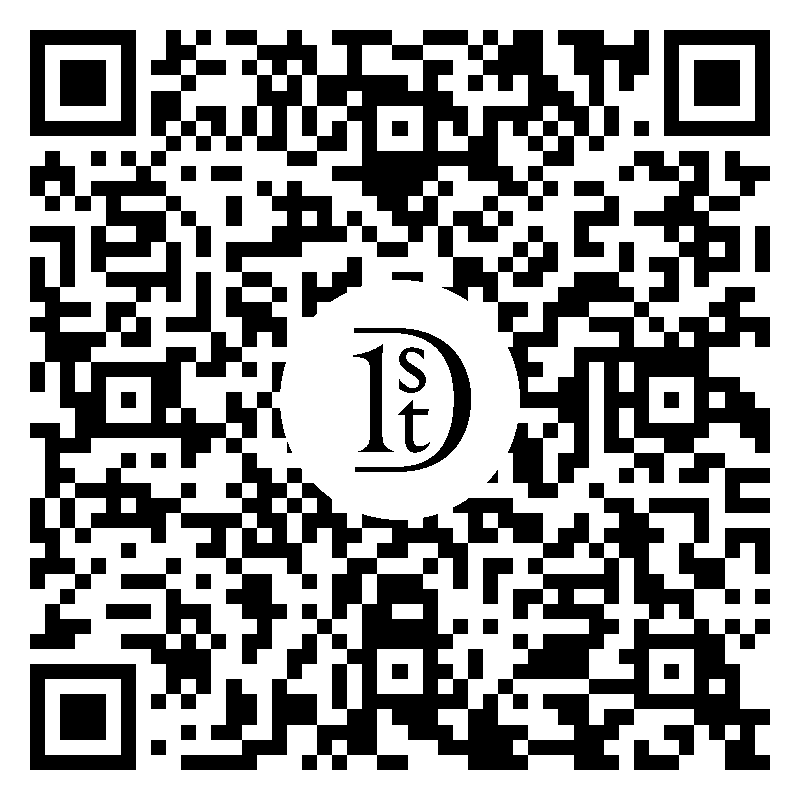 This framed still is part of an animated video project titled "Gold Rush," from McLean Fahnestock's solo show at Channel to Channel, "Beautifully Awful Scenes." This still depicts a black and white print of a palm tree on fire, though the fire has been replaced with glitter by the artist. Many of the depicted scenes were inspired by moments where Fahnestock was astonished by something that was equal parts mesmerizing and distressing. “Seeing my first wildfire in person, or the images of San Francisco covered in an orange haze, all the while recognizing that these things were in fact terrible. They signified disasters and ecological shifts. The increase in wildfire events is due in part to the encroachment of larger, developed communities onto lands that were previously maintained for fire season by natural means or by the Forest Service, but it is also due in a large part to global climate change and massive drought. Wildfires are not relegated to the western US. They happen across the country and often occur in the Smokey Mountains, just on a smaller scale.” McLean Fahnestock seeks out footage, images, and items that expand our understanding of place, real and unreal. McLean received a BFA from Middle Tennessee State University and MFA from California State University Long Beach. Her work has been exhibited and screened across the United States and Internationally at institutions such as the Aurora Picture Show and Menil Collection, Houston, Frist Art Museum, Nashville, Black Mountain College Re{Happening}, North Carolina, Technisches Museum Wien, Vienna, Austria, The California Science Museum, Los Angeles, The British Library, London, and MOCA Hiroshima, Japan.

1stDibs Buyer Protection Guaranteed
If your item arrives not as described, we’ll work with you and the seller to make it right. Learn More
About the Seller
5.0
Located in Chattanooga, TN
Vetted Seller
These experienced sellers undergo a comprehensive evaluation by our team of in-house experts.
Established in 2014
1stDibs seller since 2018
54 sales on 1stDibs
Typical response time: 14 hours
More From This Seller