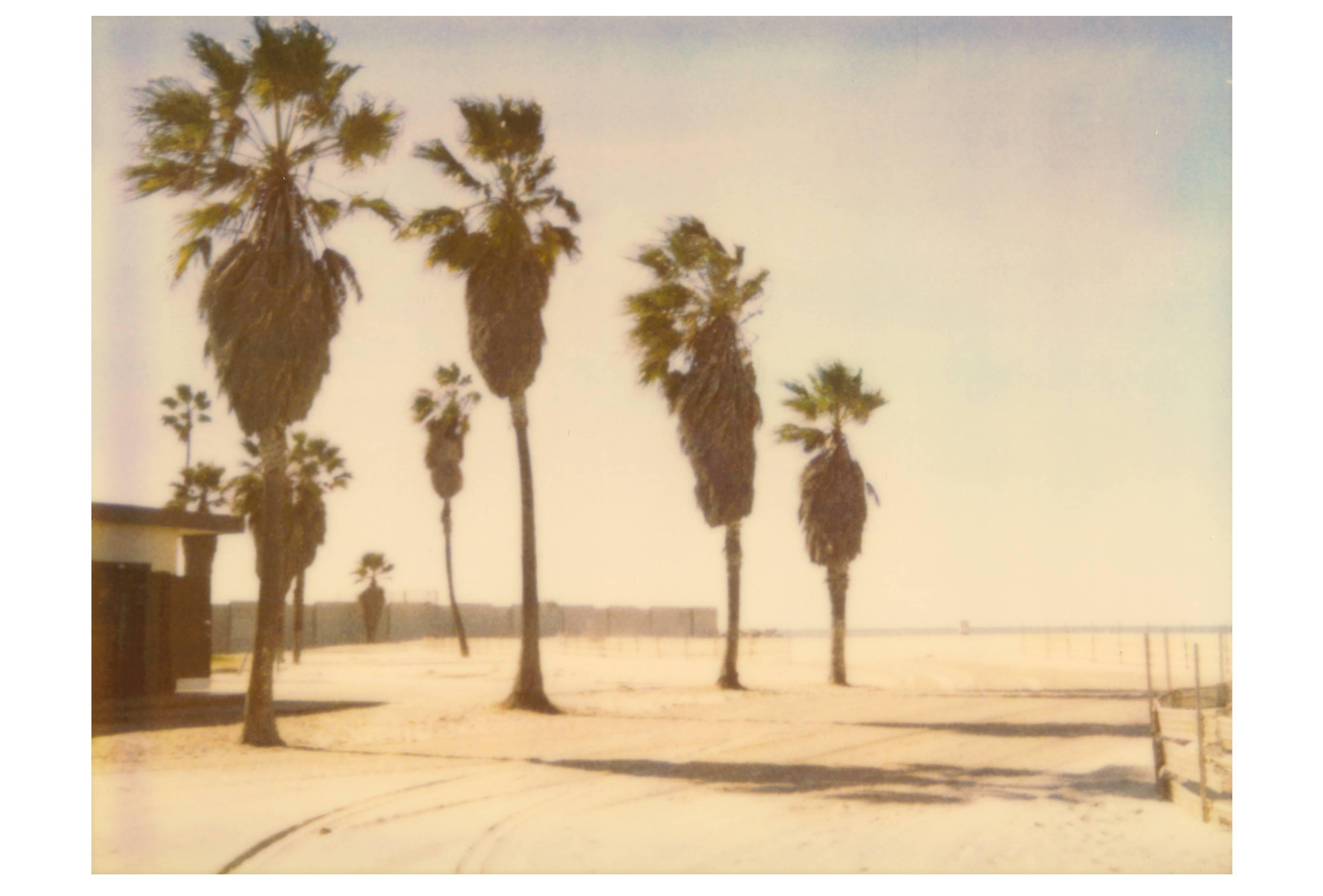 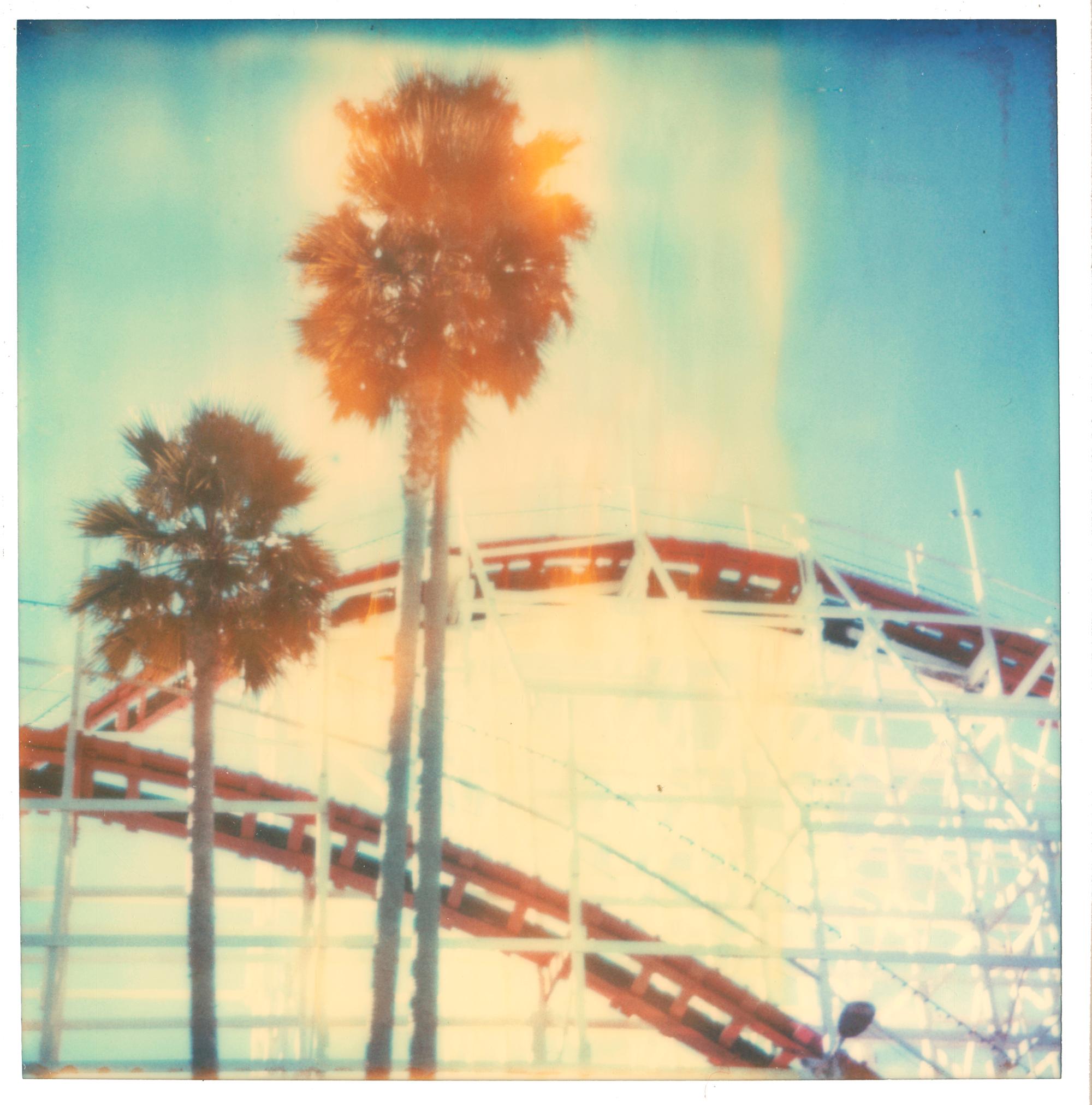 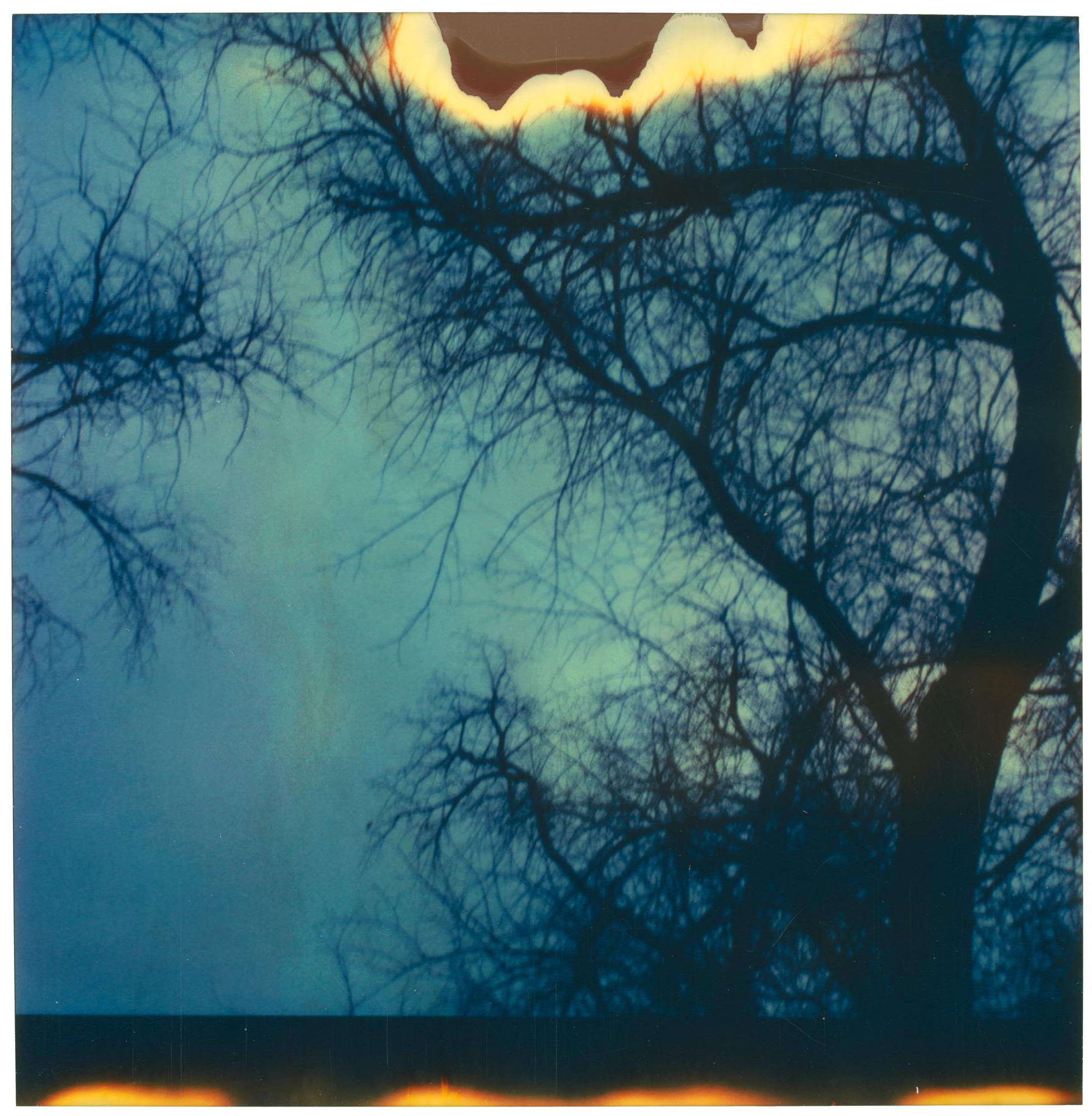 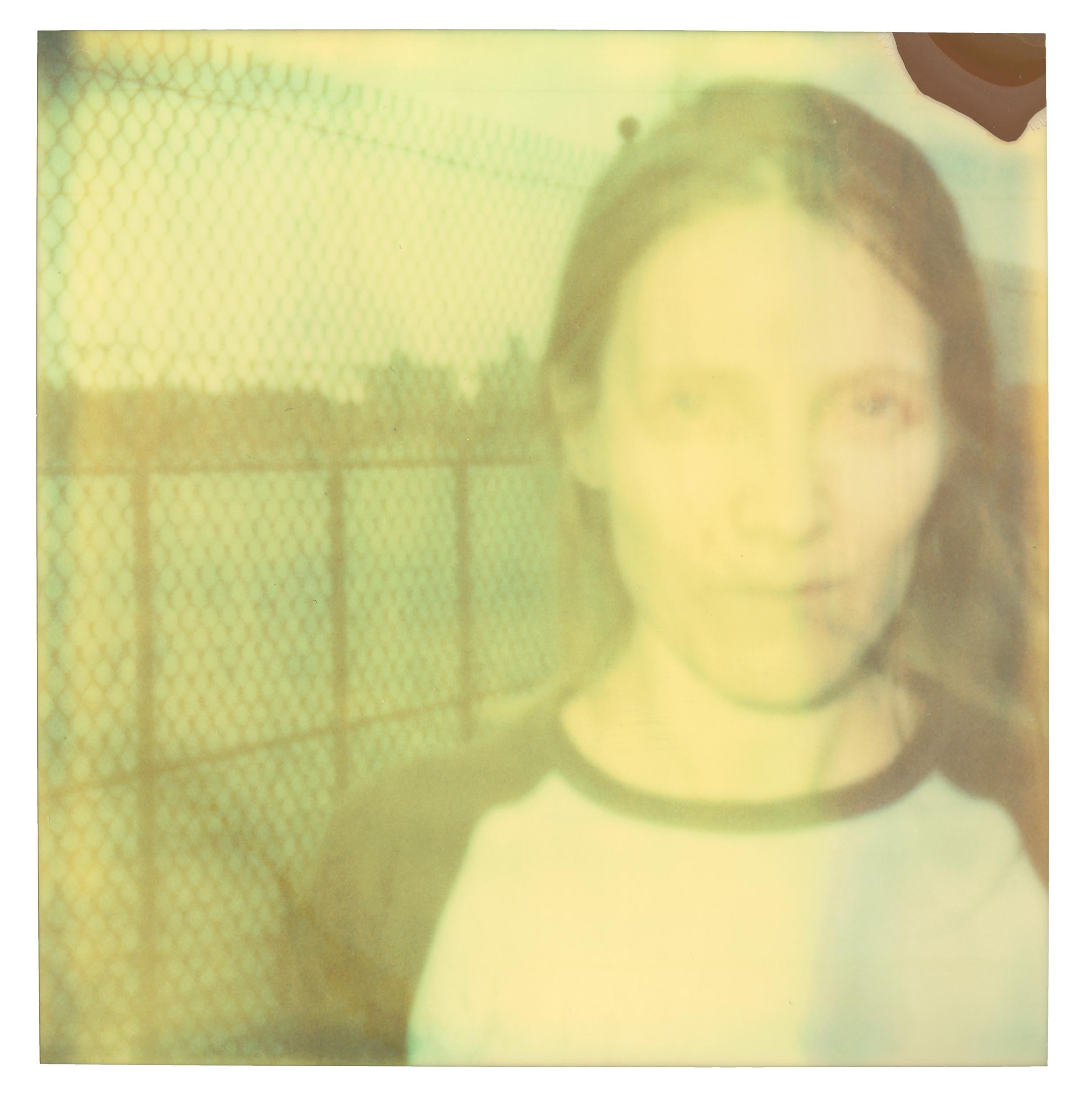 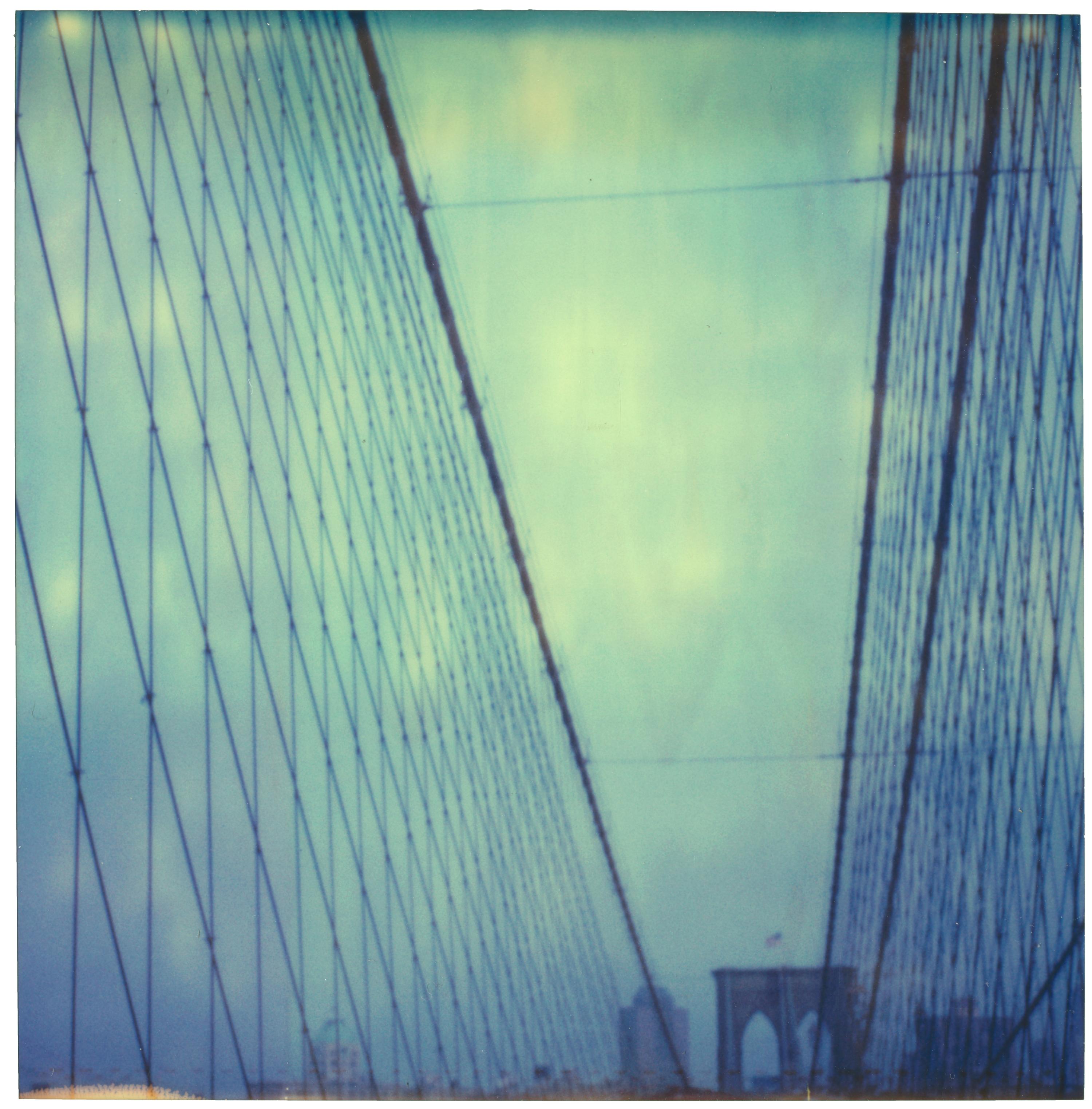 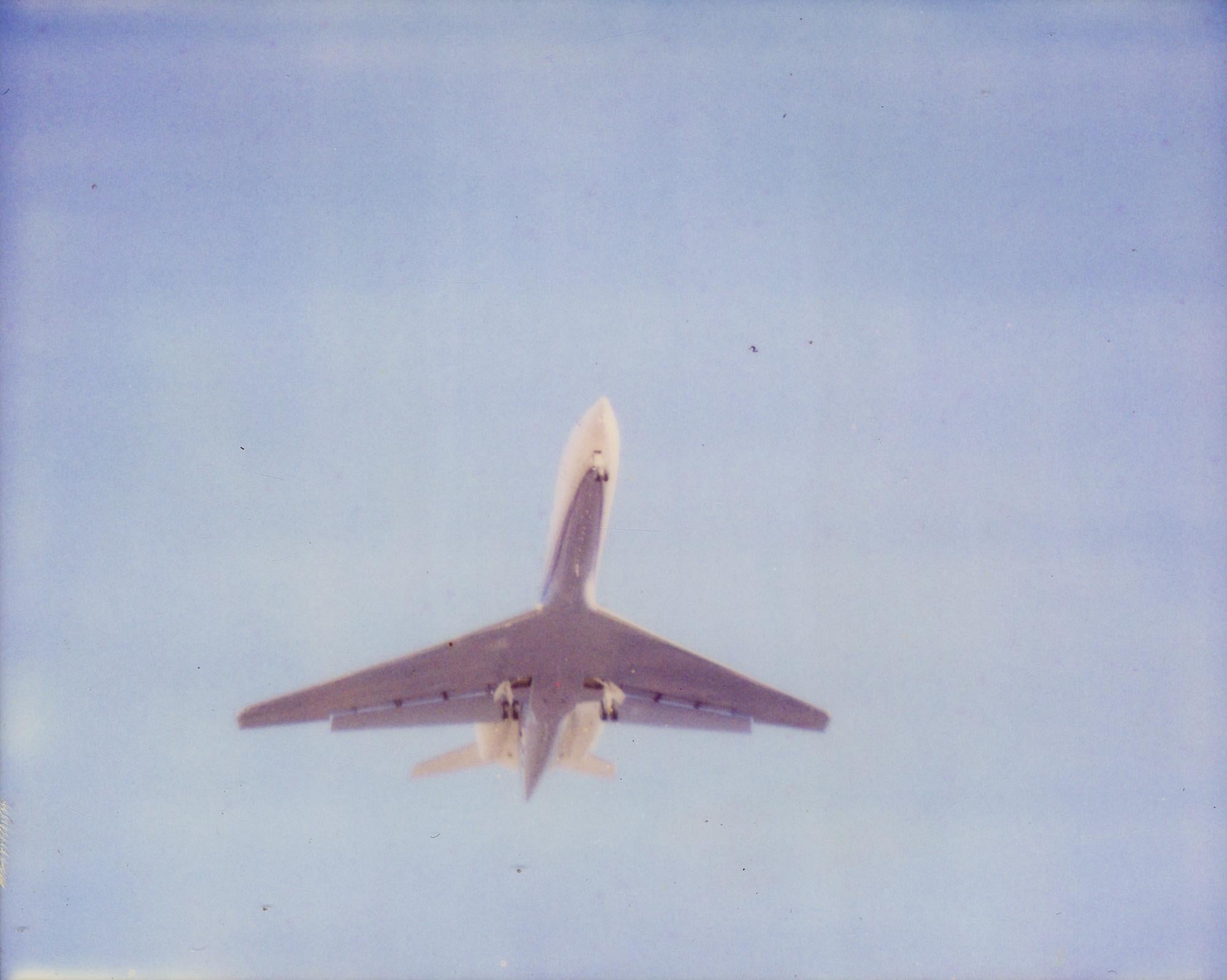 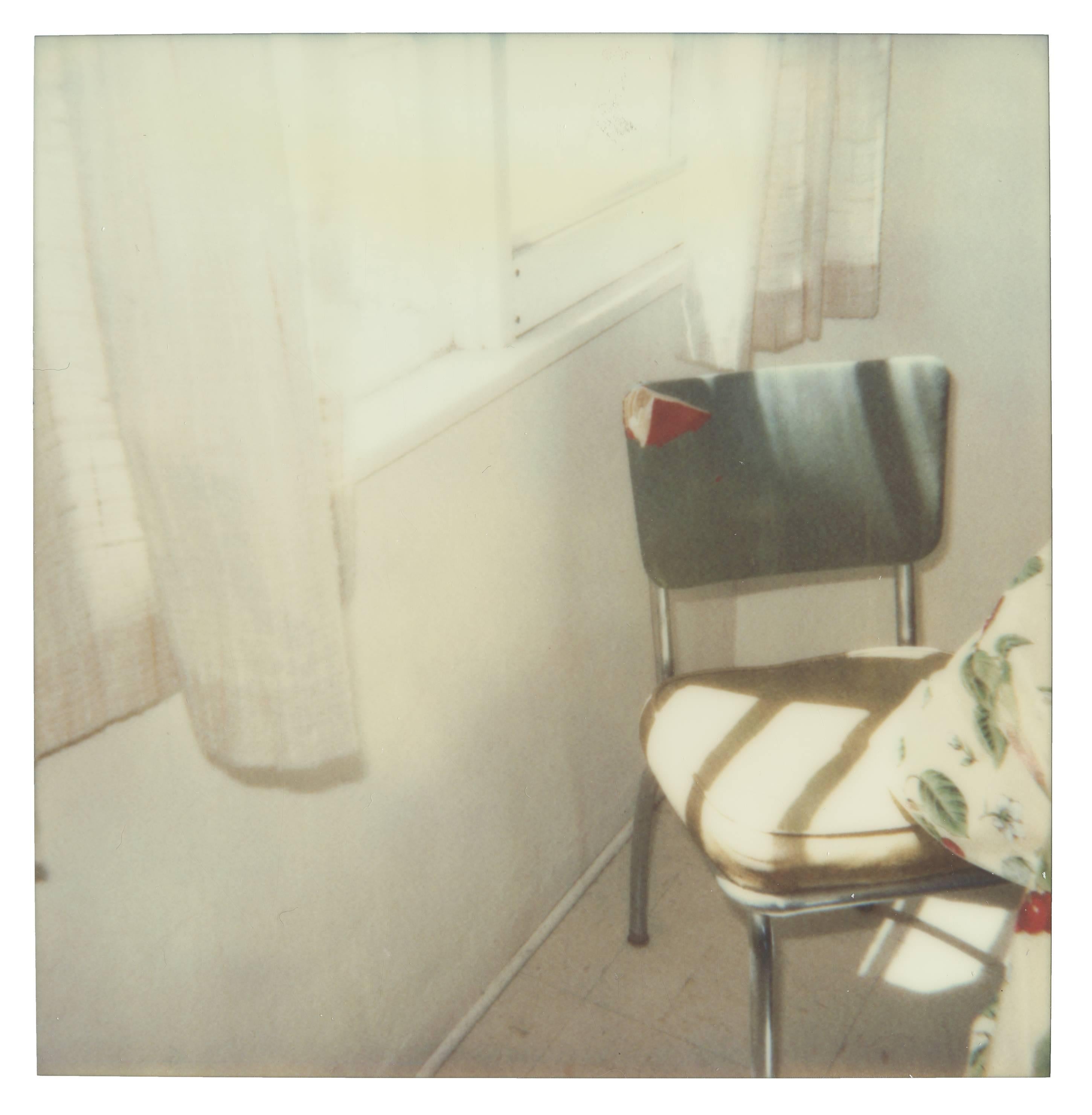 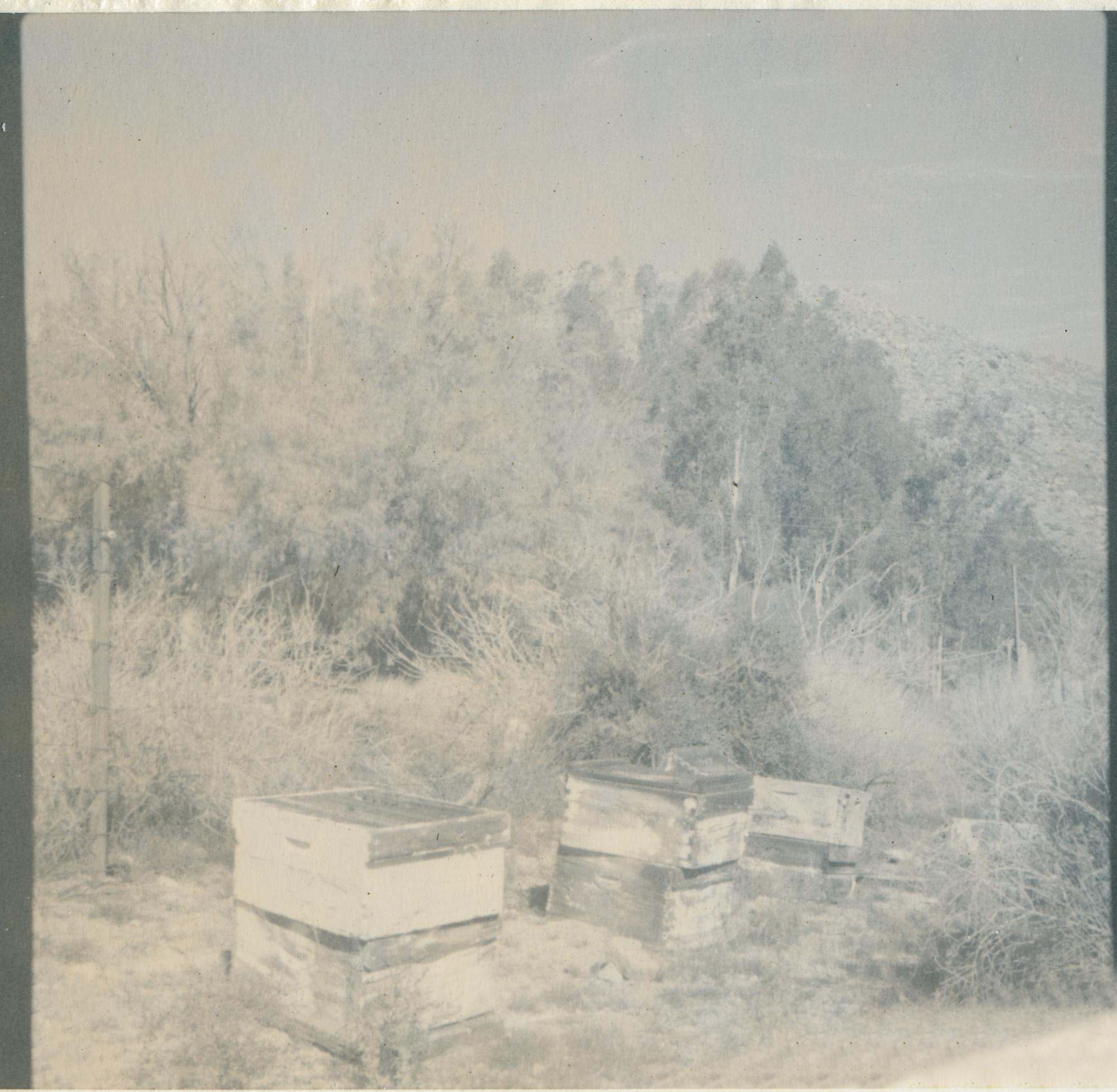 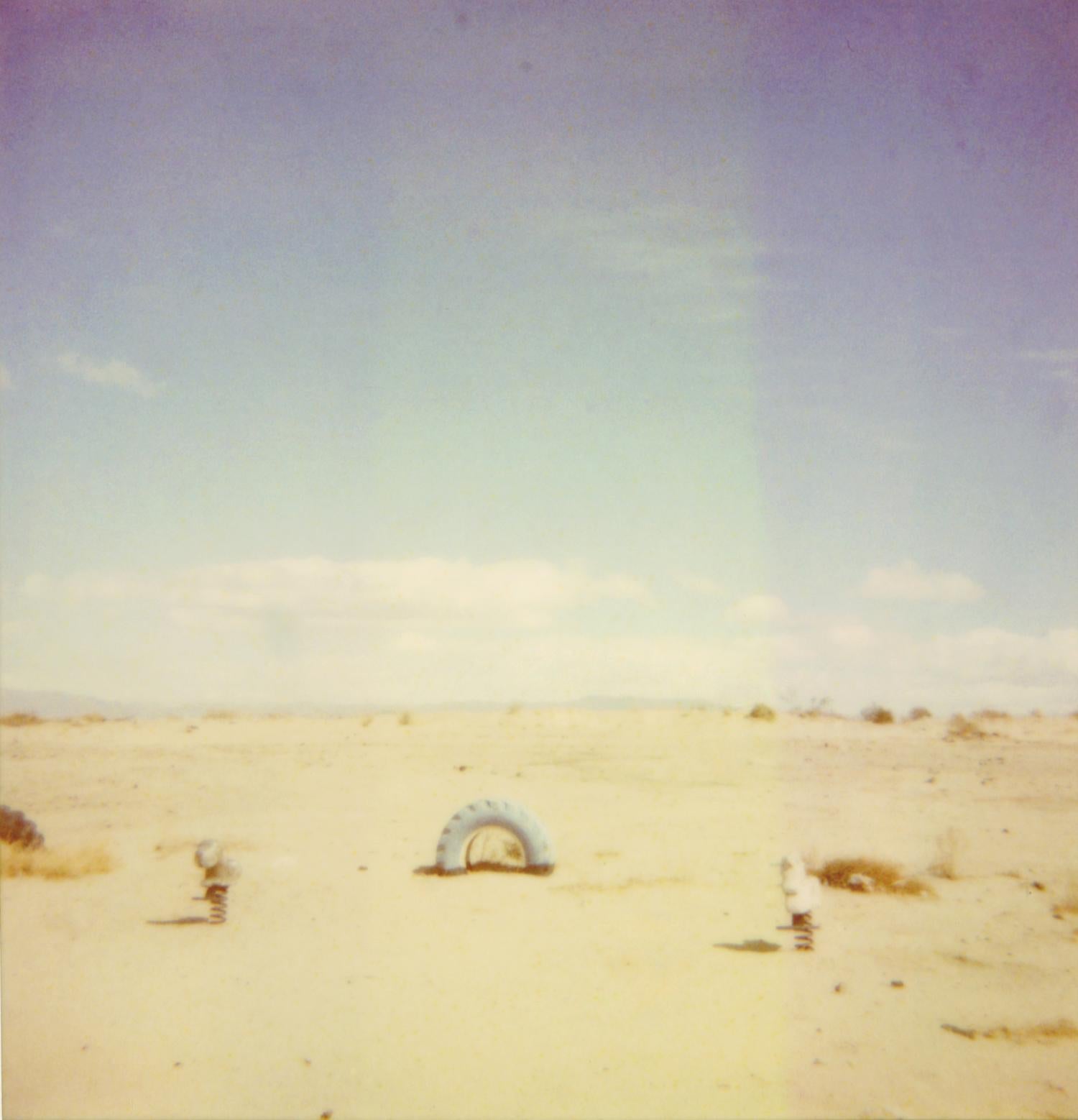 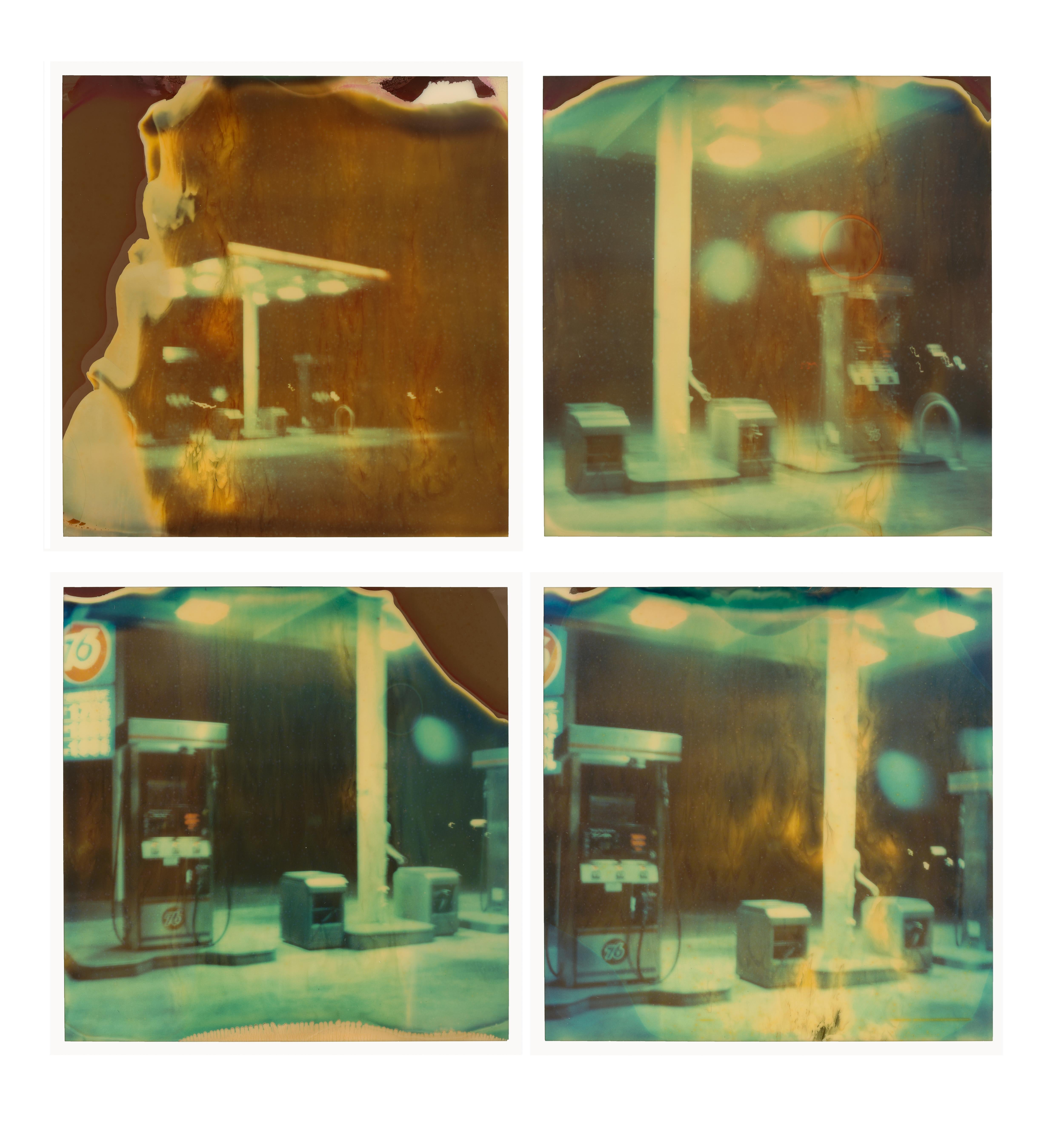 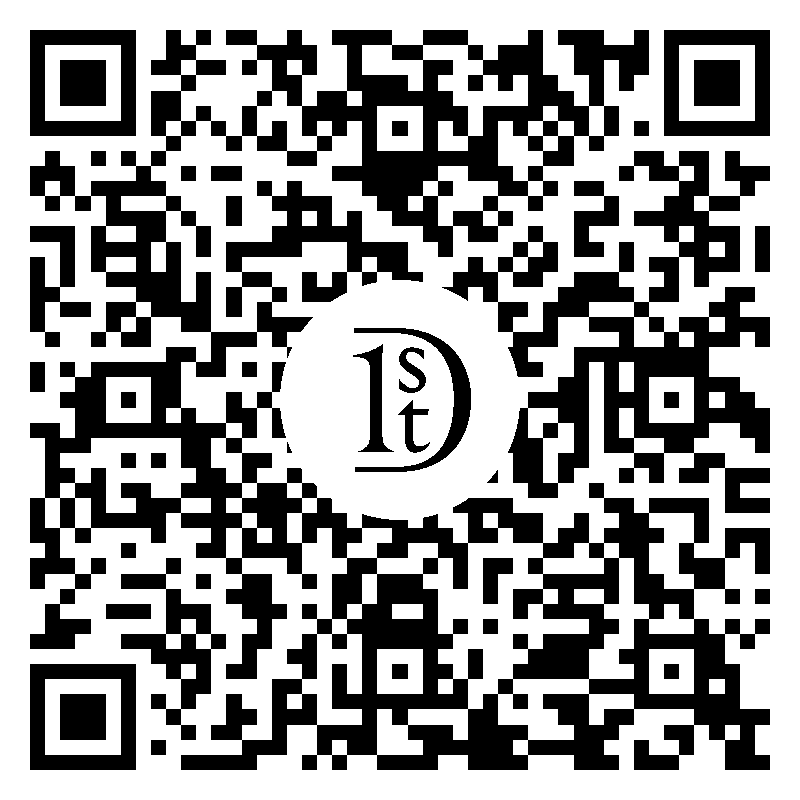 'Joshua Tree' (29 Palms, CA), Edition 2/10, 20x20cm, 1999, digital C-Print, based on a original expired Polaroid. Certificate and signature label. Artist inventory 20975.02. Not mounted. Living and working in Los Angeles and Berlin, Stefanie Schneider's scintillating situations take place in the American West. Situated on the verge of an elusive super-reality, her photographic sequences provide the ambience for loosely woven story lines and a cast of phantasmic characters. Schneider works with the chemical mutations of expired Polaroid film stock. Chemical explosions of color spreading across the surfaces undermine the photograph's commitment to reality and induce her characters into trance-like dreamscapes. Like flickering sequences of old road movies Schneider's images seem to evaporate before conclusions can be made - their ephemeral reality manifesting in subtle gestures and mysterious motives. Schneider's images refuse to succumb to reality, they keep alive the confusions of dream, desire, fact, and fiction. Stefanie Schneider received her MFA in Communication Design at the Folkwang Schule Essen, Germany. Her work has been shown at the Museum for Photography, Braunschweig, Museum für Kommunikation, Berlin, the Institut für Neue Medien, Frankfurt, the Nassauischer Kunstverein, Wiesbaden, Kunstverein Bielefeld, Museum für Moderne Kunst Passau, Les Rencontres d'Arles, Foto -Triennale Esslingen. “It was Stefanie Schneider, who inspired me to start the company THE IMPOSSIBLE PROJECT after seeing her work, which seems to achieve the possible from the impossible, creating the finest of art out of the most basic of mediums and materials. Indeed, after that one day, I was so impressed with her photography that I realized Polaroid film could not be allowed to disappear. Being at the precise moment in time where the world was about to lose Polaroid, I seized the moment and have put all my efforts and passion into saving Polaroid film. For that, I thank Stefanie Schneider almost exclusively, who played a bigger role than anyone in saving this American symbol of photography.” –Florian Kaps, March 8th 2010 (“Doc” Dr. Florian Kaps, founder of “The Impossible Project”)

$674
Love In New York
By David Drebin
Located in Greenwich, CT
Drebin’s Dreamscapes transport us to the most magical places on earth. We cruise the beaches of the Amalfi Coast, smell and taste downtown San Francisco, gawk at the cityscape of Man...
Category