H 16.5 in. W 18 in.
Yoko Ono & Sean Lennon
By Andy Warhol
Located in Los Angeles, CA
This work is unique. Stamped on the reverse by The Andy Warhol Foundation for the Visual Arts. Foundation number also on verso. The work comes with an Authentication Letter from the ...
Category 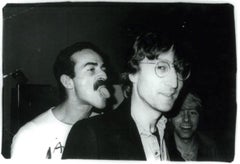 H 8 in. W 10 in.
Sean Lennon (to Care is to Cure)
By Andy Warhol
Located in Los Angeles, CA
This work is unique. Stamped on the reverse by The Andy Warhol Foundation for the Visual Arts. Foundation number also on verso. The work comes with an Authentication Letter from the ...
Category

Andy Warhol
Sean Lennon (to Care is to Cure)

H 10 in. W 8 in.
Sean Lennon with Kenny Scharf and his son
By Andy Warhol
Located in Los Angeles, CA
This work is unique. Stamped on the reverse by The Andy Warhol Foundation for the Visual Arts. Foundation number also on verso. The work comes with an Authentication Letter from the ...
Category

Andy Warhol
Sean Lennon with Kenny Scharf and his son

H 16 in. W 20 in.
New York-made in red,blue,pink,multicolor, portraits of Andy Warhol, John Lennon
By Igor Fomin
Located in Fort Lee, NJ
New York - is a capital of the World that will no one indifferent. That’s the way the artist, Igor Fomin is seeing it. He is showing historical portrait of the city, mixing persons, ...
Category

H 76 in. W 76 in. D 1.5 in.
John Lennon and Victor Hugo
By Andy Warhol
Located in New York, NY
Framed by Handmade Frames to archival standards. Image comes with Certificate of Authenticity from The Andy Foundation for the Visual Arts. Markings on verso: 1. Foundation rubber s...
Materials

H 8 in. W 10 in.
Andy Warhol, Photograph of Sean Lennon, 1984
By Andy Warhol
Located in Los Angeles, CA
Sean Lennon is a musician and the son of John Lennon and Yoko Ono. Image dimensions: 10 x 8 in. Framed dimensions: 18.5 x 16 in. Work is framed to archival standards by Handmade F...
Category

How Much is a Andy Warhol Lennon?

The price for an artwork of this kind can differ depending upon size, time period and other attributes — a andy warhol lennon in our inventory may begin at $120 and can go as high as $18,000, while the average can fetch as much as $180.