Cartier I Love U 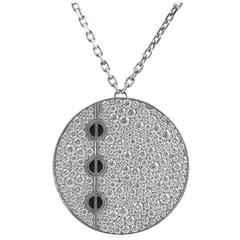 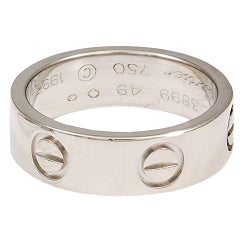 Free Shipping
Cartier Gold Love Bracelet
By Cartier
Located in Dallas, TX
This beautiful bracelet is stamped Cartier, 16, 750 and N02157. This is a great piece for everyday as well as dress. Authenticity guaranteed. Like new condition with no dings or sc...
Category

Free Shipping
Cartier Spicy Love Ring
By Cartier
Located in London, GB
An 18k rose gold Spicy Love ring by Cartier. The ring is of a polished finish and displays the iconic 6 screw motif around the outside of the ring. The ring is made up of 2 rings tha...
Category

Free Shipping
W 0.24 in.
Cartier Diamond Love Ring in Platinum
By Cartier
Located in Honolulu, HI
Authentic Cartier Platinum LOVE ring. This beautiful Cartier LOVE ring features one round brilliant diamond and the iconic screw motifs. The ring is made in Pltinum 950. The diamond ...
Category

Free Shipping
Cartier Love Necklace
By Cartier
Located in Bishop's Stortford, Hertfordshire
This necklace by Cartier is from their Love collection and features two interlinking pendants with their iconic screw detailing, set in 18ct white gold. Accompanied with a Xupes pres...
Category

Free Shipping
Cartier Love Bracelet
By Cartier
Located in Bishop's Stortford, Hertfordshire
This bracelet by Cartier is from their Love collection and features two interlinking pendants with their iconic screw detailing, set in 18k white gold. Accompanied with a Cartier box...
Category

Free Shipping
Cartier Love Earrings 2 Diamonds
By Cartier
Located in Bishop's Stortford, Hertfordshire
These earrings by Cartier are from their Love collection and feature 2 diamonds and iconic screw detail on a hoop earring in 18ct white gold. Complete with Cartier box and certificat...
Category

Free Shipping
H 0.25 in. W 0.95 in. L 0.95 in.
Cartier Love Gold Bracelet
By Cartier
Located in New York, NY
This iconic and timeless bracelet from Cartier's Love collection is finely crafted in 18k yellow gold and completed with the original Cartier screwdriver. This bangle is a size 20. M...
Category

Free Shipping
Cartier Love Gold Bangle Bracelet
By Cartier
Located in New York, NY
This iconic bracelet from Cartier's Love collection is finely crafted in 18k yellow gold and completed with the original Cartier screwdriver. This bangle is a size 18. Made in France...
Category

Free Shipping
Cartier Six-Diamond Love Ring
By Cartier
Located in London, GB
Original and authenticated as Cartier, with accompanying paperwork, we present a Cartier Love Ring. There are six diamonds which are rub over set, equally spaced out around the ring,...
Category

Free Shipping
Cartier Love White Gold Bracelet
By Cartier
Located in New York, NY
This iconic and timeless bracelet from Cartier's Love collection is crafted in 18k white gold and completed with the original Cartier screwdriver. This bangle is a size 17. Made in F...
Category

Cartier I Love U For Sale on 1stDibs

Surely you’ll find the exact cartier i love u you’re seeking on 1stDibs — we’ve got a vast assortment for sale. Each design created in this style — which was crafted with great care and often made from Gold, 18k Gold and White Gold — can elevate any look. Our collection of these items for sale includes 61 vintage editions and 190 modern creations to choose from as well. Making the right choice when shopping for a cartier i love u may mean carefully reviewing examples of this item dating from different eras — you can find an early iteration of this piece from the 20th Century and a newer version made as recently as the 21st Century, both of which have proven very popular over the years. While most can agree that any cartier i love u from our collection can easily elevate most outfits, but the choice of a Diamond version from the 106 available is guaranteed to add a special touch to your ensemble. Today, if you’re looking for a round cut version of this piece and are unable to find the perfect match, our selection also includes brilliant cut alternatives. Finding a cartier i love u for sale for women should be easy, but there are 117 pieces available to browse for unisex as well as men, too.

How Much is a Cartier I Love U?

Prices for a cartier i love u can differ depending upon size, time period and other attributes — at 1stDibs, these accessories begin at $775 and can go as high as $775, while this accessory, on average, fetches $3,654.

On the jewelry side of the business, Cartier’s internationally renowned offerings include the Tutti Frutti collection, which featured colorful carved gemstones inspired by Jacques’s trip to India and grew in popularity during the Art Deco years; the panthère motif, which has been incorporated into everything from brooches to rings; and the Love bracelet, a minimal, modernist locking bangle reportedly inspired by medieval chastity belts.