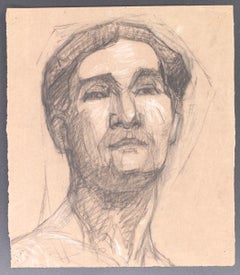 H 9.45 in. W 10.63 in. D 0.04 in.
Portrait of a Woman - Original Charcoal Drawing - Early 20th Century
Located in Roma, IT
Portrait of a Woman is an original artwork realized by an Unknown Artist. Gray point drawing and unsigned watercolor, written behind CH.L. Paper pasted on cardboard. Image Dimensio...
Category 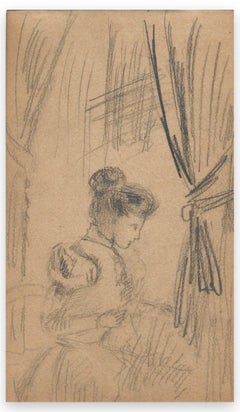 H 12.37 in. W 6.74 in. D 0.04 in.
'In the Study - Self Portrait of Frida Kahlo,' Charcoal Drawing, Unknown
Located in Oklahoma City, OK
Capturing the most-loved Mexican painter Frida Kahlo, this original charcoal drawing on brown paper by an unknown artist captures Kahlo beautifully. The drawing is signed in the lowe...
Category

'In the Study - Self Portrait of Frida Kahlo,' Charcoal Drawing, Unknown 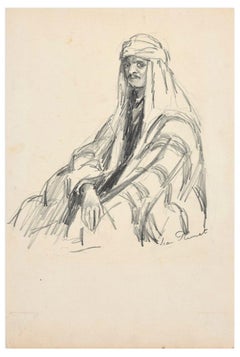 H 11.42 in. W 8.27 in.
Portrait - Original Pastel and Charcoal by Fernand Renault - Early 20th Century
Located in Roma, IT
Portrait is a beautiful drawing in pastel and charcoal on paper realized by Fernand Renault (1865-1909) In good condition. Stamped on the lower right. The artwork represents the p...
Category 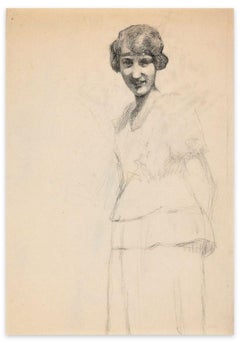 H 13 in. W 8.5 in.
Early 20th Century Spaniel Dog Portrait
Located in Soquel, CA
Substantial and period portrait of a beautiful spaniel done in charcoal signed "Lee" on verso, c.1913-1917. Although this is by an unknown artist it is an excellent example of Philad...
Category

H 17 in. W 19 in. D 1 in.
Male Portrait / Study for Female Portrait - Original Charcoal and Pastel Drawing
Located in Roma, IT
Portrait of Smiling Girl is a graceful portrait of a young girl, drawn in pencil by an anonymous artist in the early 20th century. The state of preservation is very good, except for...
Category

H 10.24 in. W 7.49 in. D 0.04 in.
Portrait of Woman - Original Charcoal Drawing by Unknown French Artist - 1800
Located in Roma, IT
Portrait of Woman is a beautiful drawing in pencil on gray paper. On the lower right, in pencil, there is the signature of the author, unfortunately unreadable, that did not make the...
Category

H 8.47 in. W 6.78 in. D 0.04 in.
Vintage Charcoal Portrait in Neoclassic Style
Located in Sag Harbor, NY
This early 20th century portrait depicts the bust of a man on pedestal, drawn from a sculptural piece in charcoal. These were popular 19th century renditions usually done in a neocla...
Category

H 13 in. W 10.32 in.
Portrait Of A Young Lady
Located in Heathfield, GB
A well-executed charcoal drawing of a young woman, from the circle of Augustus John. 9' x 7" unframed.
Category

Portrait Of A Young Lady, Unknown

H 16.93 in. W 11.82 in.
Portrait of Woman - Charcoal Drawing by J. Rochelles Collon - Early 1900
Located in Roma, IT
Woman is an original drawing in pencil, realized by Jean Roch Collon, with an inscription on the lower center. The State of preservation is Very good Sheet dimension : 21 x 11 cm. ...
Category

PORTRAIT OF AN AFRICAN AMERICAN MAN.

How Much is a Charcoal Drawing Portraits Early 20th Century?

The price for an artwork of this kind can differ depending upon size, time period and other attributes — a charcoal drawing portraits early 20th century in our inventory may begin at $145 and can go as high as $240,000, while the average can fetch as much as $554.

Finding the Right Drawings and Watercolor Paintings for You

Revitalize your interiors — introduce drawings and watercolor paintings to your home to evoke emotions, stir conversation and show off your personality and elevated taste.

Drawing is often considered one of the world’s oldest art forms, with historians pointing to cave art as evidence. In fact, a cave in South Africa, home to Stone Age–era artists, houses artwork that is believed to be around 73,000 years old. It has indeed been argued that cave walls were the canvases for early watercolorists as well as for landscape painters in general, who endeavor to depict and elevate natural scenery through their works of art.

The supplies and methods used by artists and illustrators to create drawings and paintings have evolved over the years, and so too have the intentions. Artists can use their drawing and painting talents to observe and capture a moment, to explore or communicate ideas and convey or evoke emotion. No matter if an artist is working in charcoal or in watercolor and has chosen to portray the marvels of the pure human form, to create realistic depictions of animals in their natural habitats or perhaps to forge a new path that references the long history of abstract visual art, adding a drawing or watercolor painting to your living room or dining room that speaks to you will in turn speak to your guests and conjure stimulating energy in your space.

When you introduce a new piece of art into a common area of your home — a figurative painting by Italian watercolorist Mino Maccari or a colorful still life, such as a detailed botanical work by Deborah Eddy — you’re bringing in textures that can add visual weight to your interior design. You’ll also be creating a much-needed focal point that can instantly guide an eye toward a designated space, particularly in a room that sees a lot of foot traffic.

When you’re shopping for new visual art, whether it’s for your apartment or weekend house, remember to choose something that resonates. It doesn’t always need to make you happy, but you should at least enjoy its energy. On 1stDibs, browse a wide-ranging collection of drawings and watercolor paintings and find out how to arrange wall art when you’re ready to hang your new works.

The visual artist completed a new work in front of a crowd at the 1stdibs Gallery.