H 19.69 in. W 43.31 in. D 13.78 in.
Unusual Vintage Coffee Table with Tray
Located in Buchanan, NY
Stylish round coffee table with glass top and a silvered metal serving tray resting on a shelf under the glass. The table has recently been plated in antique nickel finish. The finis...
Category

H 17 in. Dm 44 in.
Willy Rizzo Black Lacquered Wood Italian Coffee Table with Bar and Tray, 1970s
By Willy Rizzo, Mario Sabot
Located in Roma, IT
Wonderful square coffee table with a central square hole for bar compartment. It is attributed to design master Willy Rizzo, and it was produced in Italy during the 1970s. It made...
Category

H 16.54 in. W 43.31 in. D 43.31 in.
Italian Coffee Table with Two Round Trays
Located in Waalwijk, NL
Italian coffee table, walnut, glass, Italy 1960s Side table with two tops on different levels. This coffee table features two round tops, the one on top is smaller. Four black legs ...
Category 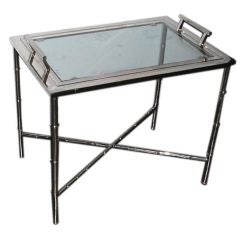 H 13.78 in. W 39.38 in. L 13.78 in.
Brass Tray Table with laquered base
Located in North Miami, FL
a beautifully updated brass table with an ecrue high gloss laquered base. Brass has been polished
Category

Brass Tray Table with laquered base

Pair of Low Tabl with Pivoting Trays in the Style of Milo Baughman, Italy, 1970s

Coffee Table With Glass Tray For Sale on 1stDibs

How Much is a Coffee Table With Glass Tray?