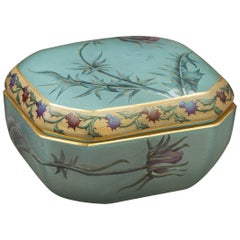 H 4.7 in. Dm 2 in.
Daum Nancy Enameled Two Handled Bowl, circa 1900
By Daum
Located in New York, NY
Signed in intaglio Daum Nancy with the Cross of Lorraine.
Category

H 13.75 in. W 5 in. D 3.5 in.
Art Nouveau Enameled and Etched Glass Vase by Daum
By Daum
Located in New York, NY
A French Art Nouveau enameled and etched Fleurs et Abeilles' glass vase by Daum. This vase is features a shape which Daum used because it lends itself to undulating and soft nature s...
Category

H 5.4 in. W 2.6 in. D 2.6 in.
French Art Nouveau Cameo Glass Vase "Paysage de Pluie" by Daum Frères
By Daum
Located in London, GB
A wonderful cameo glass vase etched and enameled with silver birch trees bent over in a rain-swept landscape. The design heightened with deep pink and green colors interwoven on the ...
Category

Daum Enamelled For Sale on 1stDibs

At 1stDibs, there are many versions of the ideal daum enamelled for your home. Frequently made of glass, art glass and cut glass, every daum enamelled was constructed with great care. You’ve searched high and low for the perfect daum enamelled — we have versions that date back to the 19th Century alongside those produced as recently as the 20th Century are available. A daum enamelled made by Art Nouveau designers — as well as those associated with Art Deco — is very popular. Daum each produced at least one beautiful daum enamelled that is worth considering.

How Much is a Daum Enamelled?

A daum enamelled can differ in price owing to various characteristics — the average selling price 1stDibs is $6,919, while the lowest priced sells for $1,800 and the highest can go for as much as $37,500.