H 67 in. W 49.5 in. D 0.2 in.
"Lawrence of Arabia / Lawrence d' Arabie" Original French Film Poster
Located in London, GB
Original French film poster designed for the films 1971 rerelease. This epic British film is based on the life of T. E. Lawrence. It was directed by David Lean and produced by Sam S...
Category

H 23 in. W 15 in. D .1 in.
"Possession" Movie Film Poster by Andrezej Zulawski Design Basha, French, 1980
Located in Labrit, Landes
Possession movie film poster 1980 designed by Basha b1934- A film by Andrezej Zulawski Many original cinema posters were issued folded or were subsequently folded This has some mi...
Category 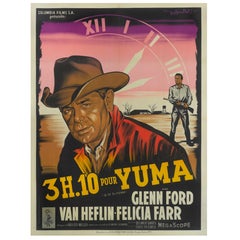 H 63 in. W 47 in. D .1 in.
Original French Film Poster
Located in Los Gatos, CA
This poster announces the French release of the 1930 film "Her Man" featuring Helen Twelvetrees. This melodrama, one of the earliest versions of "Frankie and Johnnie" and perhaps the...
Category 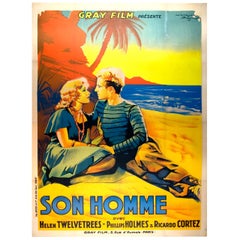 H 64 in. W 49 in. D .1 in.
Vivo Per la Tua Morte Original French Film Poster, Belinsky, 1968
By Constantin Belinsky
Located in Bath, Somerset
Some stunning original and evocative artwork by Belinsky, this time for the spaghetti western film “Vivo per la tua Morte / A Long Ride” from Hell starring Steve Reeves in one of his...
Category 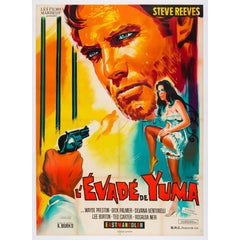 H 63 in. W 47.25 in. D .2 in.
"La Dolce VITA or La Douceur De Vivre" Film Poster
Located in London, GB
Original French film poster for the 1960 film “La Dolce VITA”. Perhaps no film has ever managed to capture the spirit, perhaps even the flavor of the generation that begot it as Fel...
Category

H 63 in. W 47 in. D .1 in.
"Bullitt" Film Poster, 1968
Located in London, GB
Bullitt, the film for which Steve McQueen is best remembered it's his personal favorite as well, features one of the best car chase scenes in film history. More importantly however, ...
Category

H 63 in. W 47 in. D .1 in.
"Winning" Film Poster, 1969
Located in London, GB
Race car driver Frank Capua (Paul Newman) holds track victories above all else, but as he competes in the string of races that lead to motoring's crown jewel, the Indianapolis 500, h...
Category

H 32 in. W 24 in. D .1 in.
"Bullitt" Film Poster, 2006
Located in London, GB
An all guts, no glory San Francisco cop becomes determined to find the underworld kingpin that killed the witness in his protection. Linen-backing + £100 Framing options: Gla...
Category

How Much is a French Film Poster?

Prices for a French film poster can differ depending upon size, time period and other attributes — at 1stDibs, they begin at $134 and can go as high as $38,930, while the average can fetch as much as $300.