Free Shipping
Viennese Imperial Porcelain Collecting Cup Yellow and Gold with Cupids, 1825
By Viennese Imperial Porcelain Manufactory
Located in Vienna, AT
The cylindrical white cup is painted two-thirds dark yellow from the bottom upwards, and over the entire cup there is ample gold decoration with vine leaves and tendrils, gold also o...
Category

H 2.28 in. Dm 4.76 in.
Fabergé Imperial Yellow Gold Egg Hoop Drop Earrings
By Fabergé
Located in London, GB
The price shown includes applicable VAT, GST, duties, shipping and insurance for delivery in the United Kingdom only. Please contact us to receive a quote for the product price in yo...
Category 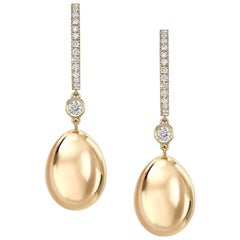 Free Shipping
Pair of Imperial Yellow Chinese Porcelain Lamps
Located in Lambertville, NJ
Elegant and classic Chinese porcelain lamps with rosewood bases. These lamps is a vibrant Imperial yellow in a graceful urn vase shape. The shades are for photographic purposes only ...
Category

Free Shipping
Fabergé Imperial Yellow Gold Pavé Emerald Spiral Egg Pendant
By Fabergé
Located in London, GB
The price shown includes applicable VAT, GST, duties, shipping and insurance for delivery in the United Kingdom only. Please contact us to receive a quote for the product price in yo...
Category 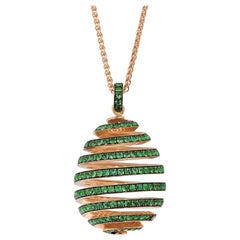 H 1.78 in. Dm 13.59 in.
Silver and Imperial Yellow Guilloche Enamel Quarter Repeater by D. Fresard
Located in London, GB
A beautiful silver and imperial yellow guilloche enamel with black border quarter repeating miniature carriage clock. Set upon a Tigers eye base. A most unusual marble base making us...
Category

Free Shipping
H 0.48 in. W 0.99 in. Dm 0.87 in. L 1.11 in.
10ct Imperial Topaz Intaglio Sun Moon Hand Carved Pendant 14k Yellow Gold AD2265
Located in Osprey, FL
♥ This is a pendant featuring a stunning hand-carved sun and moon intaglio topaz, bezel set in luxurious 14K yellow gold in a matte finish ♥ This listing is for the pendant ONLY. T...
Category

Free Shipping
H 0.3 in. W 0.51 in. L 0.79 in.
H. Stern 18 Karat Yellow Gold Diamond and Imperial Topaz Bracelet
By H. Stern
Located in Southampton, PA
This H. Stern bracelet is made of 18K yellow gold and embellished with diamonds and imperial topazes. The bracelet weighs 45.7 grams and measures 7” in length. Offered in estate c...
Category

H 13.25 in. Dm 7 in.
“Flamboyant“, Painting of Calme Harmony with White, Imperial & Imperious Yellow
By Andrée de Frémont
Located in Clermont-Ferrand, FR
Large yellow flowers emerge on the sides of the roads in summer, in Tyrol as in Brittany, and probably everywhere else. These solar flowers, usually considered to be weeds, are actu...
Category

H 31.5 in. W 31.5 in. D 0.79 in.
Imperial Topaz and Diamond Ring in 18 Karat Yellow and White Gold
Located in Lucerne, CH
This sparkling cocktail ring features a cushion-shaped imperial topaz of approximately 14.00 carats. Surrounded by an impressive entourage of 16 brilliant-cut diamonds of G/H colour ...
Category

Petra Class Aquamarine Citrine Imperial Topaz Green and Pink Tourmaline Bracelet
By Petra Class
Located in Dallas, TX
A one of a kind, wearable work of art by acclaimed jewelry maker Petra Class, the 'In the Rough' Bracelet is handmade in signature-finished 22k yellow gold and showcases an assortmen...
Category

Free Shipping
Estate Imperial Topaz Diamond Gold Ring
Located in Beverly Hills, CA
This estate ring is full of life and gleam. It features a 10 carat imperial orange topaz that is haloed by 1.15 carats of round cut diamonds. The ring is set in split shank 18K yello...
Category

Free Shipping
Imperial Topaz Diamond Gold Two-Tone Ring, GIA Certified
Located in Beverly Hills, CA
A spectacular imperial topaz weighing 8.60 carats. It is certified by the GIA and has a yellowish-orange color. It is accompanied by 0.60 carats or round brilliant cut diamonds set i...
Category

Free Shipping
Certified Natural Icy and Imperial Jade and Diamond Pendant, Suitable for Kids
Located in Hong Kong, HK
THIS JADE GLOWS! Here is a rare ICY Jade and diamond pendant. This pendant is set in 18k yellow gold with a nice imperial green jade, diamonds, and a long icy jade. There are an esti...
Category

Free Shipping
Pink Topaz in 18kt Gold Cassandra Ring by Cynthia Scott
By Cynthia Scott
Located in Logan, UT
Fabulously feminine and sweet, the Cassandra is a great ring for smaller stones that have enough impact to stand on their own. There is just enough visual weight and detail to be wor...
Category

H 10.5 in. Dm 4.5 in.
Pair of Imperial Yellow Silk Tibetan Meditation Mats
Located in Milan, IT
A possibly unique pair of silk meditation mats decorated by the so-called brocade square pattern, a design based on the patchwork of silk brocaded textiles. Here we see a pattern com...
Category

Imperial Yellow For Sale on 1stDibs

You are likely to find exactly the imperial yellow you’re looking for on 1stDibs, as there is a broad range for sale. Frequently made of Gold, Yellow Gold and 18k Gold, this item was constructed with great care. Find an antique version now, or shop for 11 vintage or 29 modern creation for a more contemporary example of these cherished accessories. Making the right choice when shopping for an imperial yellow may mean carefully reviewing examples of this item dating from different eras — you can find an early iteration of this piece from the 19th Century and a newer version made as recently as the 21st Century, both of which have proven very popular over the years. Finding an appealing imperial yellow — no matter the origin — is easy, but H. Stern, Fabergé and Imperial Gold each produced a popular version that is worth a look. An imperial yellow can be a stylish choice for most occasions, but Diamond rings, from our inventory of 28, can add a particularly distinctive touch to your look, day or night. An oval cut version of this piece has appeal, but there are also cushion cut and round cut versions for sale. Finding an imperial yellow for sale for women should be easy, but there are 12 pieces available to browse for unisex as well as men, too.

How Much is a Imperial Yellow?

On average, an imperial yellow at 1stDibs sells for $3,650, while they’re typically $550 on the low end and $550 for the highest priced versions of this item.