H 14.75 in. Dm 14.75 in.
Pablo Picasso Madoura Ceramic Bowl 'Bull' Ramié 233
By Pablo Picasso
Located in Delray Beach, FL
This Picasso ceramic bowl "Bull, Ramié 233" is one in a small edition of only 100 and is made of Red earthenware clay with black enamel underside. Stamped with with the 'Madoura Empr...
Category

H 2 in. W 7.5 in. D 7.5 in.
Bull, 1957
By Pablo Picasso
Located in Oakland Hills, CA
Utilizing an eloquent, black silhouette, Picasso represents the bull as an animal capable of destruction. Designed in strong contrast to the red earthenware background, the black bul...
Category 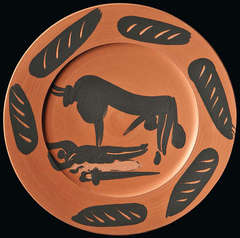 H 9 in. Dm 9 in.
Bull's Profile, 1956
By Pablo Picasso
Located in Oakland Hills, CA
Utilizing clean-cut lines and a strong color contrast of dark brown and teal-green against white, Picasso depicts the profile of a bull. Adding a sense of texture to the piece, the r...
Category 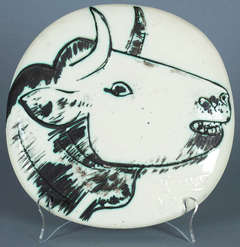 H 9.87 in. Dm 9.87 in.
Bull's Profile, 1956
By Pablo Picasso
Located in Oakland Hills, CA
Utilizing clean-cut lines and a strong color contrast of black against white, Picasso depicts the profile of a bull. Adding a sense of texture to the piece, the lines are frayed conv...
Category 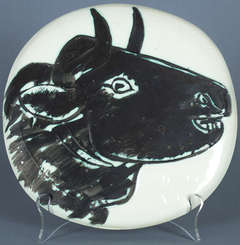 H 2 in. Dm 6.1 in. L 2 in.
1. Bull Under the Tree AND 2.Picador -- Picasso Madoura Ceramic Ramie 159 & 160
By Pablo Picasso
Located in Boca Raton, FL
ARTIST:Pablo Picasso TITLE: Bull Under the Tree DATE:1952 MEDIUM:partially glazed ceramic round plate painted in black and white SIGNED:Inscribed, Stamped on back NUMBERED:From...
Category

H 7.7 in. W 7.7 in. D 1 in.
Pablo Picasso Ceramic Bowl, Picador and Bull, Atelier Madoura, Vallauris, 1955
By Pablo Picasso, Madoura
Located in La Teste De Buch, FR
Ceramic bowl by Pablo Picasso executed at the Madoura workshop in Vallauris France in the 1950s. It is title The Picador and is referenced under the number A.R 289 in the Catalogue ...
Category

Pablo Picasso
Bull Under the Tree, 1952

Pablo Picasso
Bull under the Tree, 1952

Dm 7.5 in.
Get Updated with New Arrivals
Save "Picasso Bull Ceramic", and we’ll notify you when there are new listings in this category.

On 1stDibs, you can find the most appropriate picasso bull ceramic for your needs in our varied inventory. You can easily find an example made in the Post-War style, while we also have 2 Post-War versions to choose from as well. If you’re looking for a picasso bull ceramic from a specific time period, our collection is diverse and broad-ranging, and you’ll find at least one that dates back to the 20th Century while another version may have been produced as recently as the 21st Century. When looking for the right picasso bull ceramic for your space, you can search on 1stDibs by color — popular works were created in bold and neutral palettes with elements of brown, black, gray and beige. There have been many interesting picasso bull ceramic examples over the years, but those made by Pablo Picasso are often thought to be among the most thought-provoking. Artworks like these of any era or style can make for thoughtful decor in any space, but a selection from our variety of those made in ceramic, earthenware and clay can add an especially memorable touch.

How Much is a Picasso Bull Ceramic?

The price for an artwork of this kind can differ depending upon size, time period and other attributes — a picasso bull ceramic in our inventory may begin at $695 and can go as high as $32,119, while the average can fetch as much as $8,000.