Jack Mitchell
Artist Ellsworth Kelly photographed in his studio with his latest work, 1968 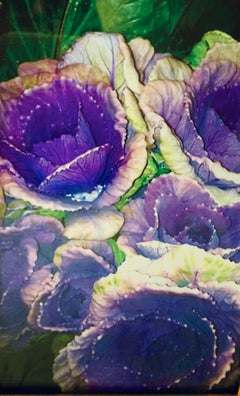 H 25 in. W 32 in.
"Purple Majesty," Photograph, circa 1975
By Michael DeCamp
Located in Long Island City, NY
This photograph was created by American artist and avid scuba diver Michael DeCamp. DeCamp's abstract photos have an enigmatic quality, and the interactions between shapes and colors...
Category

Color Photograph of a Detail of a Purple Flower

Color Photograph of a Detail of a Purple Flower

H 20.5 in. W 26.75 in. D 1.25 in.
Purple Iris Two, Square Still Life Photograph of Dark Purple Flower on Gray
By Roger Ricco
Located in Kent, CT
This dramatic square photograph of an iridescent purple iris in a frosted ivory colored glass vase against a dark gray background is printed on aluminum with a semi-gloss finish that...
Category

H 44 in. W 44 in. D .5 in.
Reflection No. 3- Abstract Landscape Photograph in Yellow+Blue+Purple (1/5)
By Rachel Berkowitz
Located in Gilroy, CA
“Reflections No. 3” is part of a work called “Reflections” created by artist Rachel Berkowitz. This series is a performative, process-based series that resulted in the creation of th...
Category

H 38 in. W 41.5 in. D 2 in.
Reflection No. 2- Abstract Landscape Photograph on Metal Green + Blue + Purple
By Rachel Berkowitz
Located in Gilroy, CA
“Reflections No. 2” is part of a body of work called “Reflections” created by artist Rachel Berkowitz. This series is a performative, process-based series that resulted in the creati...
Category

H 30 in. W 40 in.
Reflection No. 6- Abstract Landscape Photograph on Metal Green+Blue+Purple
By Rachel Berkowitz
Located in Gilroy, CA
“Reflections No. 6” is part of a body of work called “Reflections” created by artist Rachel Berkowitz. This series is a performative, process-based series that resulted in the creati...
Category

H 16 in. W 24 in. D .5 in.
Reflection No. 5- Abstract Landscape Photograph on Metal in Green+Blue+Purple
By Rachel Berkowitz
Located in Gilroy, CA
“Reflections No. 5” is part of a body of work called “Reflections” created by artist Rachel Berkowitz. This series is a performative, process-based series that resulted in the creati...
Category

H 10 in. W 15 in.
A cold morning, Photograph, C-Type
By Viet Ha Tran
Located in Yardley, PA
Fine art photography, 2018. Photo of the lake in Valley of Jerte, Spain The artwork/photo is sold unframed I work with top printing houses in Madrid & Barcelona, Spain that have e...
Category

H 24 in. W 24 in.
A cold morning III, Photograph, C-Type
By Viet Ha Tran
Located in Yardley, PA
Fine art photography, 2018. Photo of the lake in Valley of Jerte, Spain The artwork/photo is sold unframed I work with top printing houses in Madrid & Barcelona, Spain that have e...
Category

H 27.6 in. W 41.3 in. D 0.1 in.
"Blue Ivy" foliage leaves photograph
By Claire Clarkson
Located in Brooklyn, NY
Claire Clarkson's "Blue Ivy" is from a series of photographs exploring the replication of the cyanotype photographic process through modern technologies. Her works often contrast eac...
Category

H 72 in. W 40 in. D .25 in.
Like a painting of autumn, Photograph, C-Type
By Viet Ha Tran
Located in Yardley, PA
Photo framed in golden tint frame made of wood and glass, READY TO HANG. Please refer to the photos to see how it looks like. The photo will be shipped in a wooden crate and will arr...
Category

Viet Ha Tran
Like a painting of autumn, Photograph, C-Type, 2015

H 37 in. W 52 in. D 0.4 in.
Atacama #1 a vibrant landscape photograph
By Pico Garcez
Located in Brooklyn, NY
Pico Garcez (b.1963, São Paulo, Brazil) In Love with Photography, Iconography and Painting, exercises his gaze from childhood when he began to play with his first camera. Practicing ...
Category

H 43.31 in. W 23.63 in.
Colors of Burano I, Photograph, C-Type
By Viet Ha Tran
Located in Yardley, PA
The photograph was taken at Burano island, Venice, Italy. Picturesque Burano is known for its brightly colored fishermen's houses and its casual eateries serving seafood from the lag...
Category

Deborah Benedic
View from My Hammock-Photograph , 2000

H 7.25 in. W 6 in. D 0.75 in.
Fantastic, Photograph, Archival Ink Jet
Located in Yardley, PA
From a limited edition of 5 archival photographs Signed and numbered by artist A. K. Nicholas Image: 36Ã—24 inches/91Ã—61 cm A. K. Nicholas is an American visual artist who crea...
Category

H 36 in. W 24 in. D 0.1 in.
"Mind the Gap" Subway Reefing Photograph
By Stephen Mallon
Located in New York, NY
40"x60" c-print photograph, limited edition of 5 (unframed). This photograph depicts a New York City Subway Train Car as it is lifted onto a barge as it makes its way to a drop site ...
Category

H 40 in. W 40 in. D .25 in.
FLOWERS_047, Photograph, Archival Ink Jet
By Michael Filonow
Located in Yardley, PA
macro flower shot on white :: Photograph :: Color :: This piece comes with an official certificate of authenticity signed by the artist :: Ready to Hang: No :: Signed: Yes :: Signatu...
Category

H 24 in. W 24 in. D 0.1 in.
Median Life, Photograph, Archival Ink Jet
By Vanessa Prestage
Located in Yardley, PA
From the series, Intent on the Abstract. "Nature refuses to be denied and that same steadfastness can be found in us as well. Life brings turmoil and heartache, but our desire to li...
Category

H 30 in. W 30 in. D 0.1 in.
Poet & Playwright Ntozake Shange, Color 17 x 22" Exhibition Photograph
By Jack Mitchell
Located in Senoia, GA
Playwright, poet and black feminist Ntozake Shange photographed with the cast of her play “A Photograph: Lovers in Motion,” in 1977. One of Mitchell's most beautiful color photograp...
Category

H 22 in. W 17 in. D .03 in.
Geister X / ghost ship - contemporary floating photograph
By Nina Dietzel
Located in Burlingame, CA
Geister or 'Ghost Ship' series from Nina Dietzel. Stunning on own, or paired with other images from the series. Surface mounted to polished plexiglass so that the photograph appears ...
Category

H 40 in. W 60 in. D 0.1 in.
The colors of spring II, Photograph, C-Type
By Viet Ha Tran
Located in Yardley, PA
Made in Sweden. Fine art photography 2018. Printed on GiclÃ©e on Canson Rag Photographique paper, the most premium quality fine art paper which delivers the most accurate and vibr...
Category

H 33 in. W 26.75 in. D 1.5 in.
"GHOST AT WORK", photograph, tableau, portrait, assemblage, abstract, costume
By Sophia Rauch
Located in Toronto, Ontario
"GHOST AT WORK", 2018, is a color photograph by Sophia Rauch, one in a series of "Ghost" pictures. It's an inkjet print on Hahnemeule Photo Rag Paper, and measures 36x24". Characteri...
Category

Purple Photographs For Sale on 1stDibs

There is a broad range of purple photographs for sale on 1stDibs. Finding the ideal Contemporary, Pop Art or Surrealist examples of these works for your living room, whether you’re looking for small- or large-size pieces, is no easy task — start by shopping our selection today. These items have been made for many years, with versions that date back to the 20th Century alongside those produced as recently as the 21st Century. Adding a colorful pieces of art to a room that is mostly decorated in warm neutral tones can yield a welcome change — see the purple photographs on 1stDibs that include elements of purple, black, gray, beige and more. William Dey, Jack Mitchell, Frank Schott, Lisa A. Frank and Isabelle Menin took a thoughtful approach to this subject that are worth considering. Frequently made by artists working in paper, photographic paper and pigment print, all of these available pieces are unique and have attracted attention over the years.

How Much are Purple Photographs?

The average selling price for purple photographs we offer is $1,560, while they’re typically $100 on the low end and $16,000 for the highest priced.