Free Shipping
W 0.75 in. L 2.2 in.
Tiffany & Co. Jean Schulmberger Iconic Copper Enamel Turquoise Bracelet
By Jean Schlumberger for Tiffany & Co.
Located in North Hollywood, CA
This iconic Bracelet from Tiffany is by no other than Jean Schlumberger. This bracelet is iconic expensive and hard to find. Many of his other enamel bracelets are easier to find but...
Category

Tiffany Jean For Sale on 1stDibs

You are likely to find exactly the tiffany jean you’re looking for on 1stDibs, as there is a broad range for sale. Frequently made of Gold, 18k Gold and Yellow Gold, this item was constructed with great care. In our selection of items, you can find a vintage example as well as a contemporary version. Making the right choice when shopping for a tiffany jean may mean carefully reviewing examples of this item dating from different eras — you can find an early iteration of this piece from the 19th Century and a newer version made as recently as the 21st Century, both of which have proven very popular over the years. Take a look at a tiffany jean featuring Diamond from our inventory today to add the perfect touch to your look. A round cut version of this piece has appeal, but there are also brilliant cut and mixed cut versions for sale. If you’re browsing our inventory for a tiffany jean, you’ll find that many are available today for women, but there are still pieces to choose from for unisex and men.

How Much is a Tiffany Jean?

Jewelry designer Jean Schlumberger (1907–87) once said that he strived to “make everything look as if it were growing, uneven, at random, organic, in motion.” His jewels interpreted the vitality of the natural world with lively designs that included a moonstone-topped jellyfish brooch with sapphire tentacles exuding a watery shimmer and a ring encrusted with a burst of diamonds that “bloomed” like a flower bud. 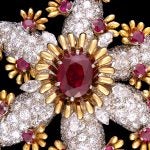