H 55.12 in. W 23.23 in. D 16.93 in.
Unusual French Period Cupboard
Located in Chulmleigh, Devon
In commode form but with doors from Louis Phillpe period with very well carved swans to sides all in faded mahogany and dark grey veined marble top, shelf to top and drawer above.
Category

H 51.19 in. W 28.55 in. D 15.56 in.
Unusual Dunbar Chest with Bifold Doors
By Edward Wormley
Located in St.Petersburg, FL
An unusual Dunbar chest, circa 1960s with bifold doors, concealing 2 drawers on one side and adjustable shelves on the other. Measuring 36" W and 18" D its small scale makes it attra...
Category 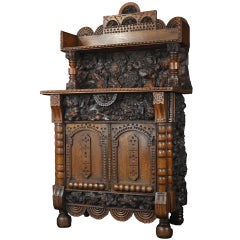 H 78 in. W 43 in. D 18.25 in.
Unusual 18th Century Swedish Baroque Buffet
Located in Helsingborg, SE
An unusual 18th century Baroque buffet or sideboard in its original finish with nine numbered drawers inside, circa 1740, Sweden. Good condition with wear consistent with age and...
Category

Unusual Modernist Vanity/Desk Made in Denmark

H 45 in. W 56 in. D 17 in.
Unusual Sculptural Front Credenza, Mid-Century Modern
Located in Pemberton, NJ
Unusual sculptural front-light wood credenza. This piece not only has great style but has tons of storage options-three long drawers and doors that open to reveal one adjustable shel...
Category

H 53 in. W 38 in. D 18 in.
Unusual Mid-Century Modern Credenza by Skovby Mobelfabrik
By Skovby Møbelfabrik A/S 1
Located in Brooklyn, NY
This beautiful vintage Danish server features an overhanging top with a curved front and a rich teak finish. A unique design that offers plenty of room for storage within its hefty d...
Category

H 84.5 in. W 51.75 in. D 19 in.
Unusual Antique Indian or African Shelve Unit Bookcase
Located in Surbiton, Surrey
A unique and unusual shelving composition. Believed to be early 20th century possibly earlier. Formed from heavy wood, with a variety of metal and brass embellishments. Fo...
Category

H 82.68 in. W 42.13 in. D 18.51 in.
Unusual Late 18th Century Swedish Rococo Cabinet
Located in Kramfors, SE
Unusual Rococo cabinet from Northern Sweden. The cabinet was manufactured during the late 18th century, sometime circa 1770. That is right around the time where previous Rococo trans...
Category

H 95.67 in. W 46.86 in. D 16.93 in.
Unusual Wooden Box for Pharmaceuticals
Located in Milan, IT
Unusual wooden box with hinged lid containing six glass bottles for pharmaceuticals. English manufacture of the second half of the nineteenth century. Good condition. Width 24 cm - i...
Category

H 7.29 in. W 9.45 in. D 3.55 in.
Fine and Unusual Napoleon III Period Boulle Cabinet
By André-Charles Boulle
Located in London, GB
Formed with three mirrored doors to the front, separated by fluted columns and decorated with inlaid brass, tortoiseshell and ebonized wood with ormolu mounts, on bun feet.
Category

H 21.50 in. W 38.50 in. D 7.75 in.
Unusual and Rare Bamboo Veneered Oak Desk and Chair
Located in Palm Springs, CA
A highly unusual bamboo veneered oak desk and stool. It is highly figured and beautifully restored. The stool or chair stores nicely under the desk.
Category

H 31 in. W 62 in. D 20 in.
Most Unusual and Highly Figured, Early 19th Century Dresser
Located in Peterborough, Northamptonshire
A most unusual and highly figured dresser. The top with two shelves below a shaped back border. Original turned handles. Extremely fine timbers throughout and in original condition. ...
Category

Unusual 9-Drawer Dresser, Sculpted Walnut Made by American of Martinsville

H 32 in. W 73.5 in. D 46 in.
Fine and Unusual American Modern Dark Walnut Desk, Edward Wormley
By Edward Wormley
Located in Hollywood, FL
The rectangular top with paneled edge and raised edges "floating" over two cabinet ends with two drawers, with pivoting wood and brass handles and a pencil drawer between, on splayed...
Category

H 30 in. W 62 in. D 27 in.
Unusual 19th Century Display Cabinet in the Form of a Lighthouse
Located in London, GB
An Unusual Display Cabinet of 'Lighthouse' form Constructed in teak; rising from a circular plinth base, inset with a single lockable door housing a shelved interior; the rotating b...
Category

Unusual 19th Century Display Cabinet in the Form of a Lighthouse

H 82.29 in. W 86.62 in. D 20.87 in.
Lovely Teak Danish Credenza with Floating Hutch Room Divider, Unusual Legs
By Bernhard Pedersen & Son
Located in Pemberton, NJ
Gorgeous Danish modern teak credenza with floating hutch. This magnificent piece is finished on both sides so it can be used as a room divider. Tons of storage options with sliding d...
Category

H 58.5 in. W 78 in. D 18 in.
20th Century Restored Unusual Czech Bauhaus Chrome White Flower Pedestal, 1930s
Located in Prague 1, CZ
This pedestal, with a frame of bent steel tube and shelves, was made in the 1930s in the Czech Republic. Original chromium plating in excellent original condition. Restored white la...
Category

How Much are Unusual Case Pieces?

Unusual case pieces can differ in price owing to various characteristics — the average selling price at 1stDibs is $4,395, while the lowest priced sells for $474 and the highest can go for as much as $85,000.