Tending relations between geographically distant cultures and, at the same time, stressing the temporal gap that separates them, is the meaning of Ana Seggiaro's work, based on the engravings of Alberto Dürer, Piranesi and Albinus. For the artist, European art is the paradigm that she has built, from that training she has resignified her works, submitting them to her consideration and leaving an embroidered mark that marks a different path from the one originally created.
In the process of creation, she takes the images that interest her, investigates its history, answers questions such as what the artist wanted to say or if she simply made it by chance. The next thing is to photograph it and modify it digitally, either by adding color or removing details to create a collage. Once the final image has been decided, a print is made on fine art canvas to begin the hand embroidery process. In the last year, in addition to embroidering, she has decided to paint over the image.

Ana Seggiaro was born in Buenos Aires, Argentina. Initially pictorial in nature, in its different stages, her work was exploring and incorporating new materials and media that complemented the oil and engraving that are the basis of its origin. She graduated in drawing and engraving from the Prilidiano Pueyrredón National School of Fine Arts in 1988. 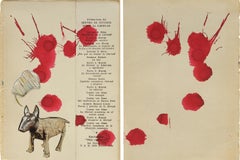 Ana Seggiaro
Geisha I, Hand Embroidery on printed cloth. From the series "Piranesi", 2021

Find wide variety of authentic Ana Seggiaro art available for sale on 1stDibs. You can also browse art by Ana Seggiaro in cord, cotton, fabric and more by medium. Much of the original work of this artist or collective was created during the 21st century and is mostly associated with contemporary style. Not every interior allows for large Ana Seggiaro art, so small editions measuring 6 inches across are available. Customers who are interested in this artist might also find and find the work of. On 1stDibs, the price for these items starts at US$600 and tops out at US$7,000, while the average work can sell for US$930..