Hans Zatzka was a well-known and regarded Austrian fantasy artist whose most popular and valuable works depicted figures of young maidens with angels, floral and other cheerful and warm scenes, including Orientalist themes. In the past 30 years alone, the high quality and detail of his beautiful paintings has caught the attention of international collectors and art dealers alike, creating a highly sought after market and demand for his instantly recognizable body of work. In the late 19th and early 20th century, many of Zazka's charming works were photographed for commercial and collectible postcards. Most of Zatzka's paintings are in private collections, and in the past century, very few of them have become available on the open market. At the young age of eighteen, Zatzka joined Austria's Academy of Fine Arts under the leadership of Professor Blaas. For his fine early works, in 1880, he received The Golden Fügermedal award. Zatzka, like many other artists of the era, traveled around Europe working and selling his art and in one of his many trips to Italy, he developed a special interest in Religious themes, decorating churches with frescoes as well as painting several religious scenes of Madonna's and Child, Saints, Angels and others. In 1885, Zatzka was commissioned to paint The Naiad of Baden a ceiling fresco at Kurhaus Baden. Most of Zatzka's income came from his work in religious art and special church commissions. Numerous leading art dealers from around the world that specialize in late 19th and early 20th-century European genre paintings have come to the conclusion that the painter signing his works Bernard Zatzka, Joseph Bernard or J. Bernard is almost certainly the artist Hans Zatzka. The consensus seems quite plausible when comparing works known to have been executed by Zatzka together with similar works displaying the signature; Joseph Bernard, J. Bernard or Bernard Zatzka. 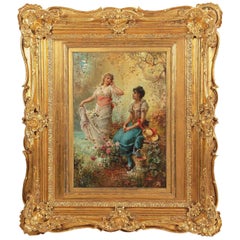 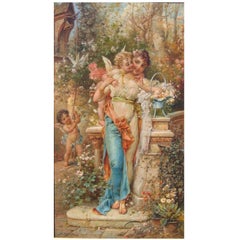 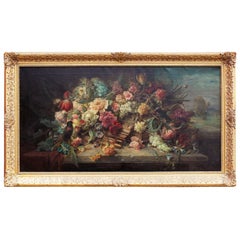 Heinz Pinggera, "Music Recital for the Cardinal" Oil on Canvas

Charles Delort, "An Invitation to the Royal Ball", Oil on Canvas

Francesco Peluso (Italian, 1836-1916) An Oil on Canvas "The Village Celebration"