When Ted Stiffel (1899–1971) founded Stiffel in 1932 in Chicago, he wanted to make functional, thoughtfully designed table lamps and other fixtures that were available at an accessible price. Born in Memphis, Stiffel first pursued a career in music before serving in World War I. After his discharge, he worked with the Western Electric Company in Chicago and then the Nellie J. Kaplan Company, a lighting firm also in the Windy City.

After he started his own lamp business, Stiffel began supplying area department stores and by the 1940s had opened a large factory that was producing lamps for nationwide sale, eventually competing with the likes of the Frederick Cooper Lamp Company, also based in Chicago. In 1948, designer Edwin J. Cole joined the company and created some of the firm’s most striking table lamps. Today, Cole’s vintage mid-century modern lighting fixtures for Stiffel, frequently with distinctively tall and shapely ceramic bodies and finished with decorative brass chinoiserie details, are highly prized by collectors.

One of Stiffel’s innovations was his patented switch, which simplified turning lights on and off: All someone had to do was grasp a lamp’s pole and gently pull down. He also designed a pole lamp with a vertical tube that held a series of fixtures on the outside. The upright pole lamp was so innovative that Sears, Roebuck and Company copied it. Stiffel sued, and the case ended up in the Supreme Court in 1964. The ruling against Stiffel was influential in whether states can give a patent to objects that do not have the invention required of federal patents.

After declaring bankruptcy in 2000, the brand was revived in 2013 in Linden, New Jersey, where newly produced high-quality lamps carry the Stiffel name.

Find a collection of vintage Stiffel lighting on 1stDibs. 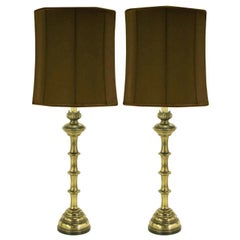 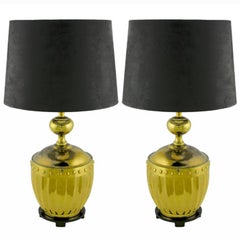 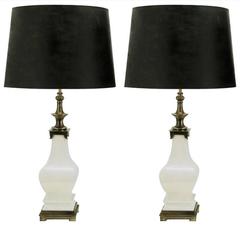 Neoclassical Tripod Base Brass Table Lamp by Stiffel
By Stiffel, Edwin Cole
Located in Chicago, IL
Brass neoclassical dual socket table lamp by Stiffel. The base is an antiqued solid brass tripod with Italianate legs and a segmented baluster. The switch pulls chains end in a uniqu...
Category

H 30 in. W 7 in. D 7 in.
Stiffel Brass Floor Lamp with Round Lucite Table
By Stiffel
Located in Chicago, IL
Modern floor lamp in brass with a round clear acrylic tabletop by Stiffel. Solid brass base with four arched legs and dual lighting elements with Classic pull chain switches. Sold sa...
Category

H 44.25 in. W 7.25 in. D 7.25 in.
Pair Stiffel Brass Crown & Sage Lacquer Obelisk Table Lamps
By Stiffel
Located in Chicago, IL
These unique art deco inspired table lamps by Stiffel are comprised of brilliantly juxtaposed brass and cast resin in the form of weathered wood. The brass plinth base supports the s...
Category

H 52 in. Dm 7.75 in.
Pair of Stiffel Large Brass and Crystal Bouillotte Table Lamps
By Stiffel
Located in Chicago, IL
In excellent original condition, these sizable three-arm lamps are made of brass, with hanging crystals. With original cream and gold tortoiseshell shades, and stately finials.
Category