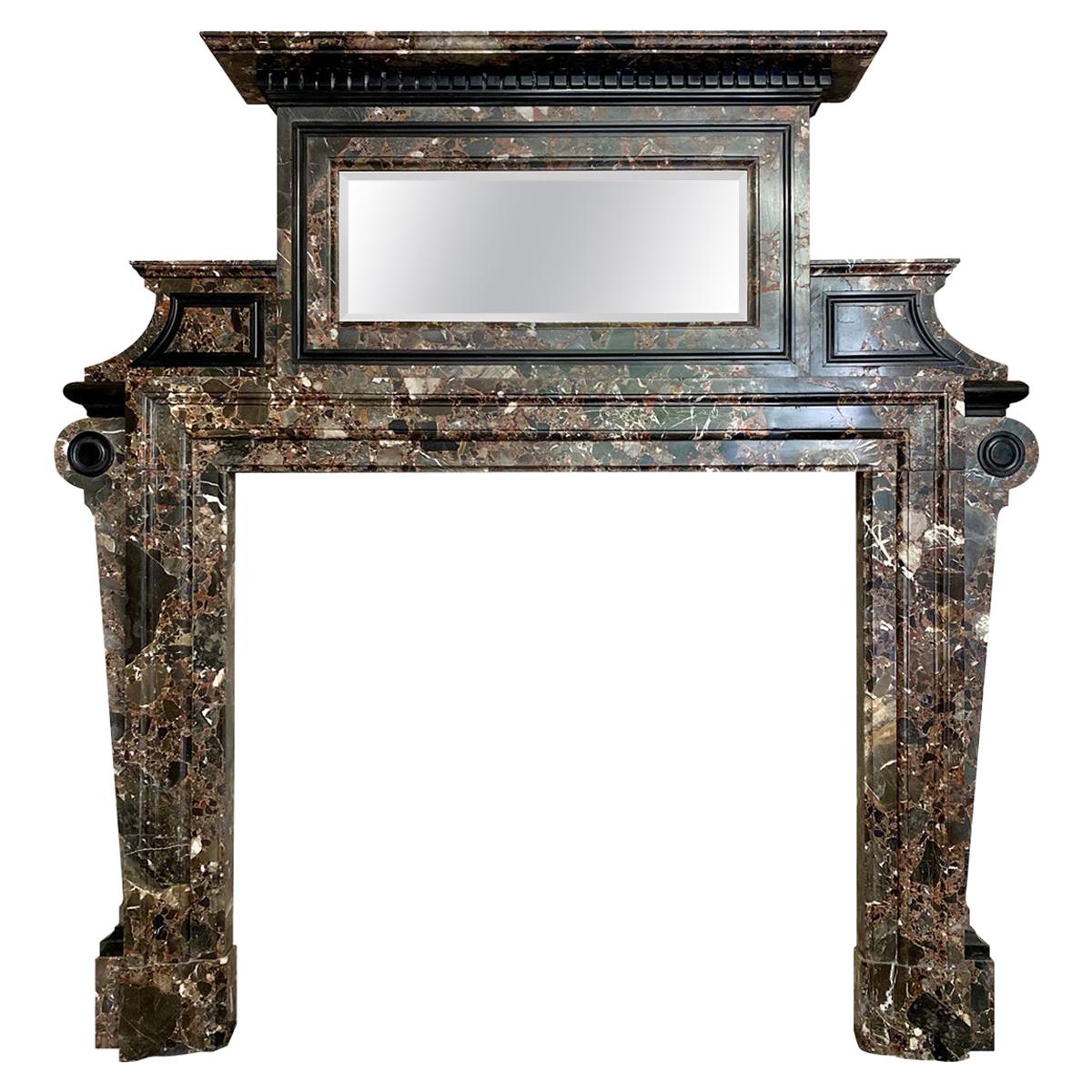 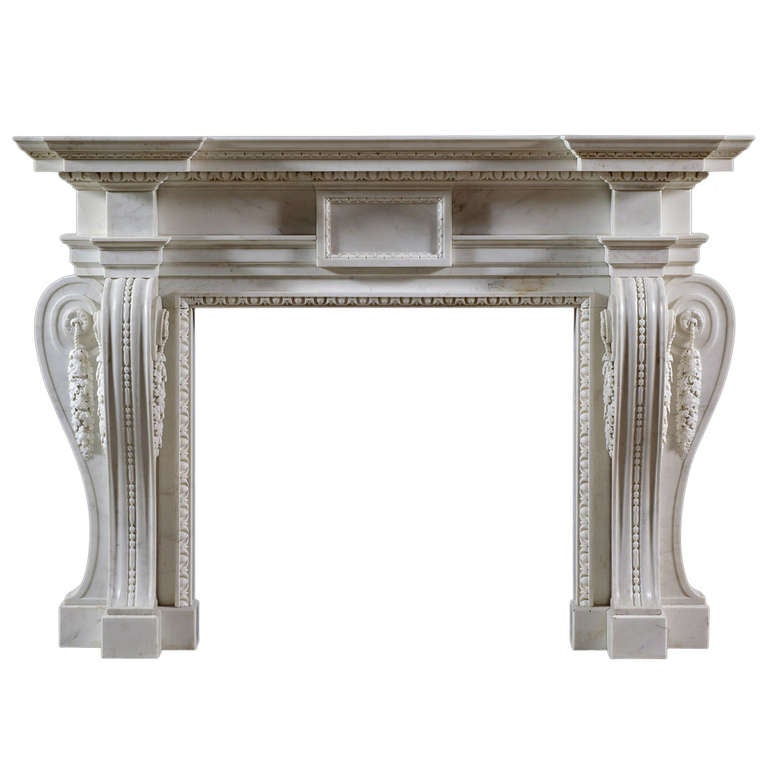 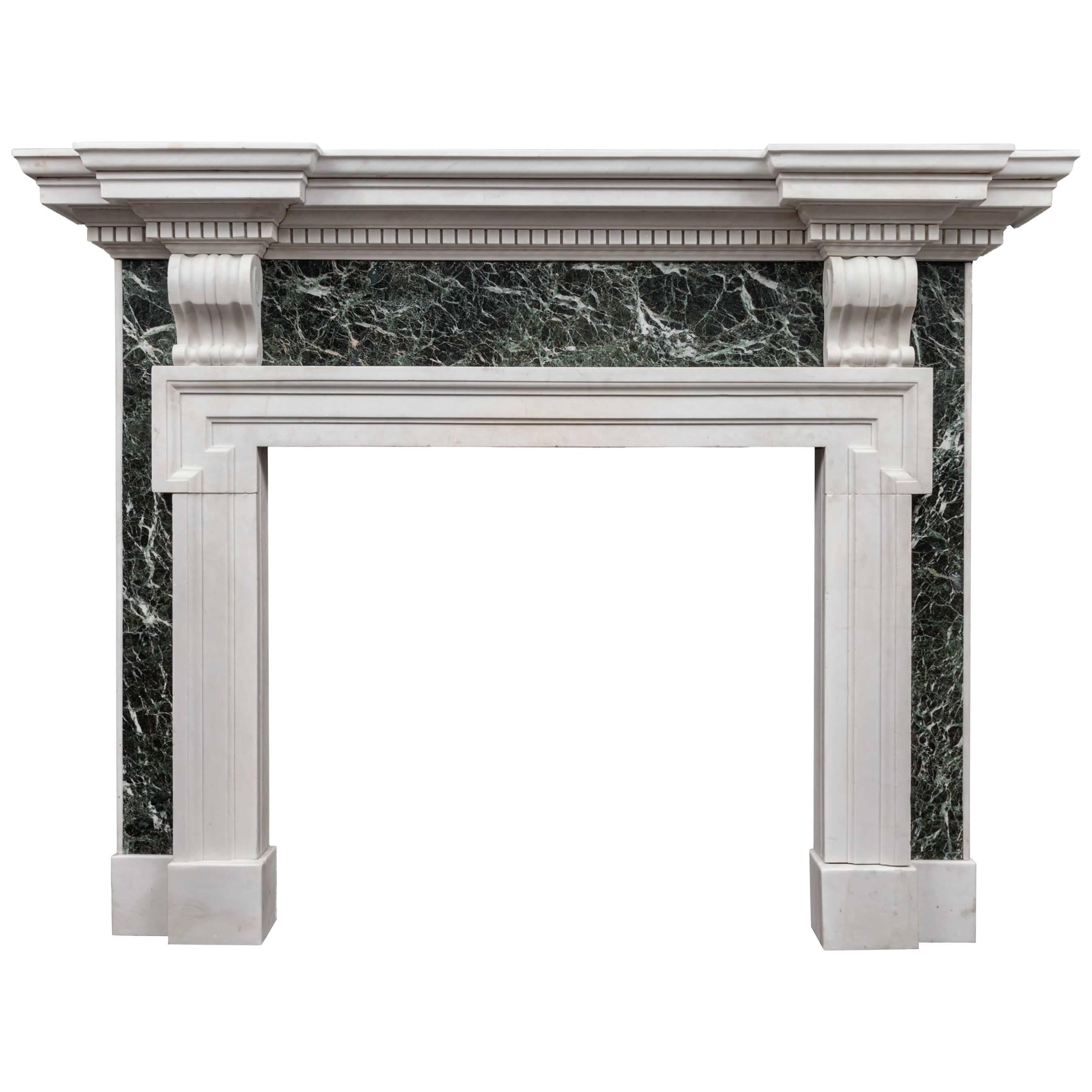 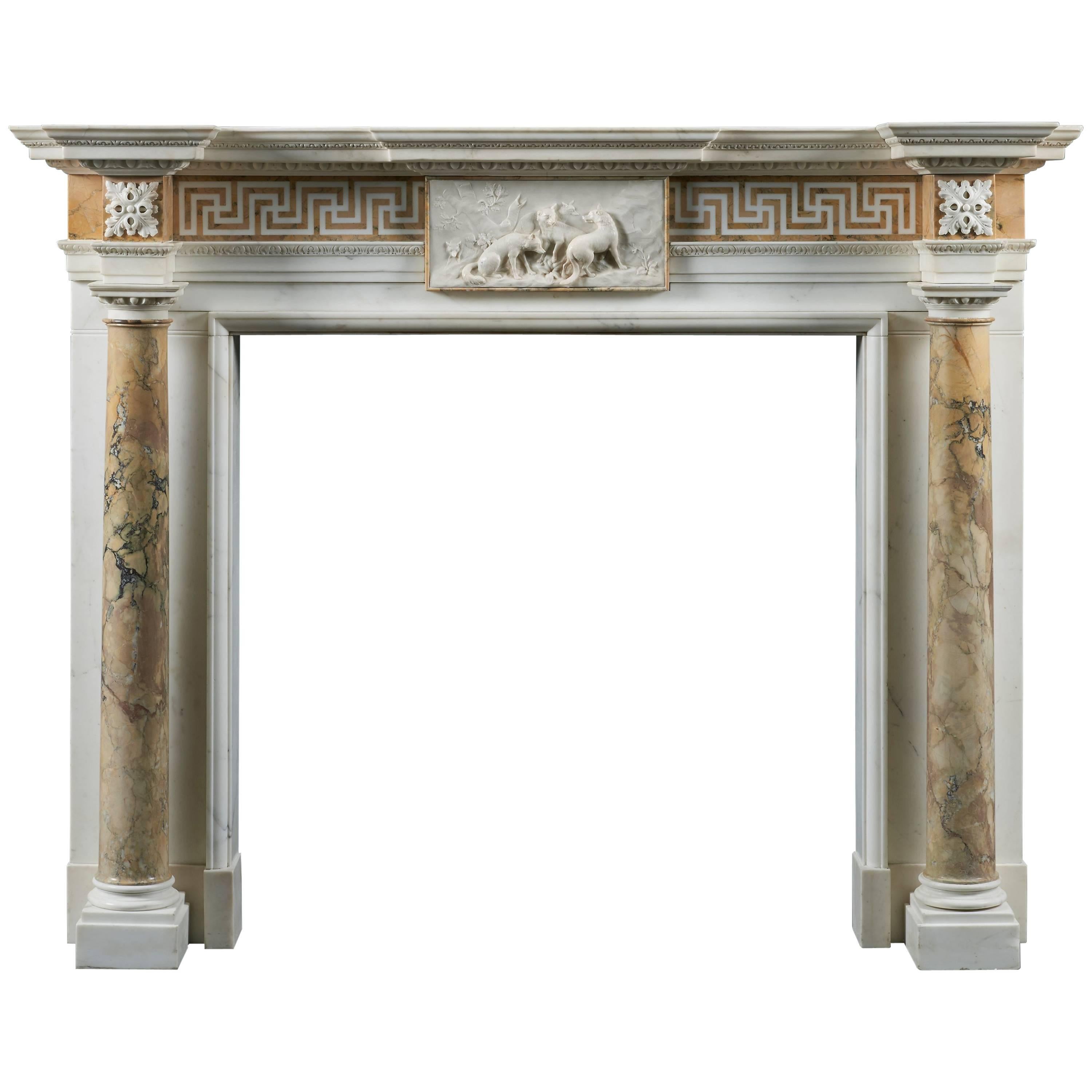 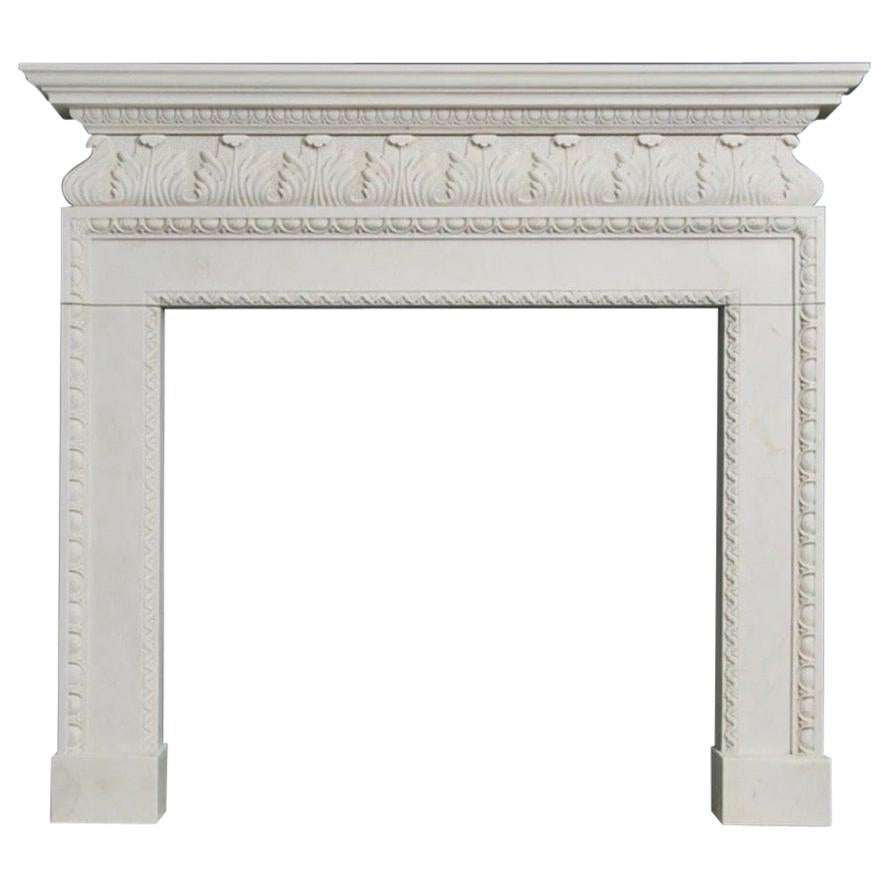 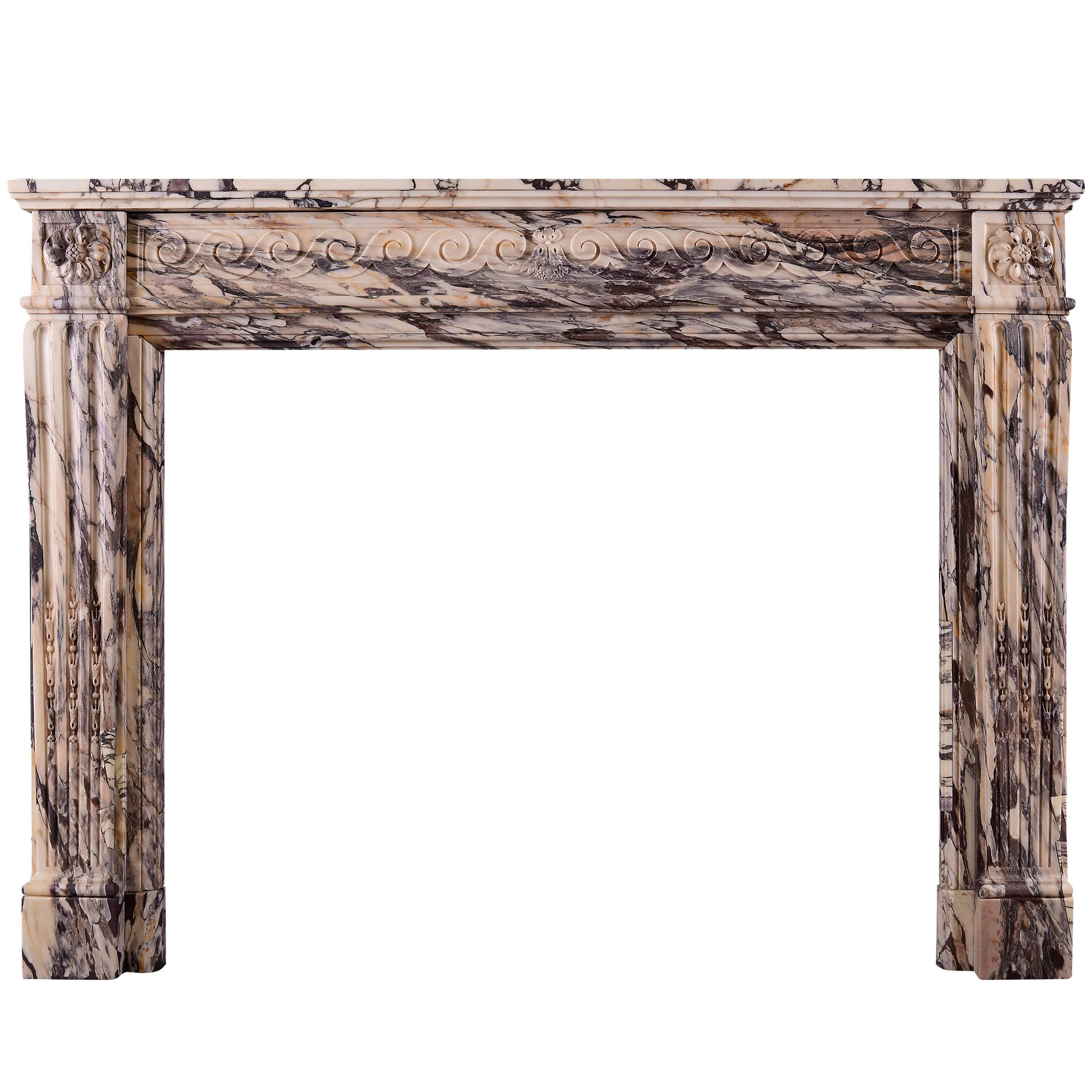 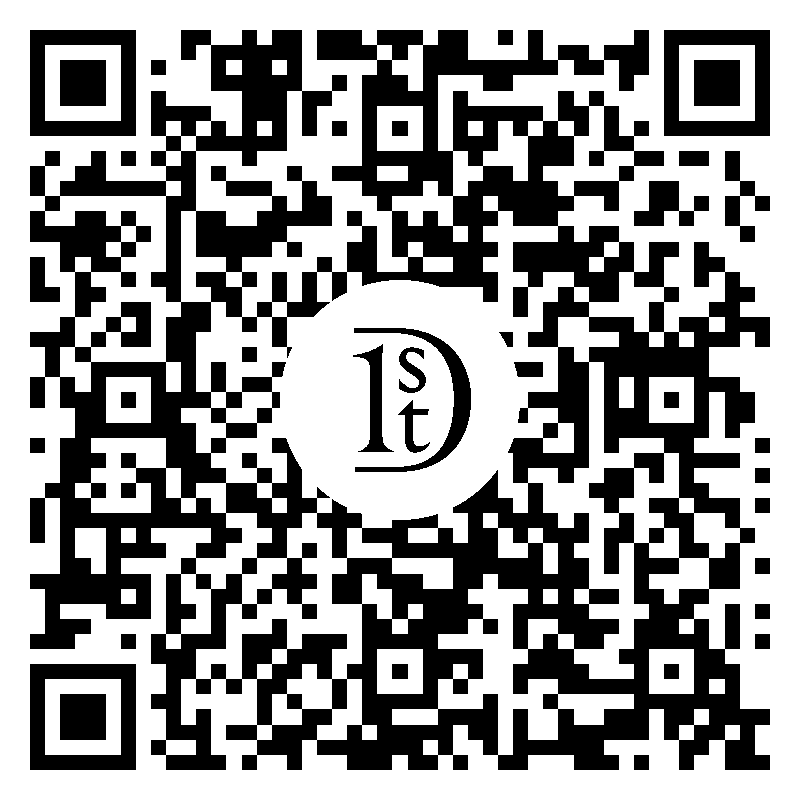 A rare and unusual George II, Palladian fireplace in variegated Breccia Violette marble decorated in contrasting statuary marble. The exceptionally fine naturalistically carved centre tablet bared a basket of fruits and flowers, attributes of spring personified and abundance. The jambs, executed in the style of Sir Henry Cheere (1703–1781), are faced with pilaster bracket consoles in statuary, decorated with mischievous Rococo satyr heads from which fall graduated bunches of flowers and fruits joined and held by ribbons, circa 1740-1750. The attractive Breccia Violet marble, from the Serravezza quarries in Carrara, Italy, is unusually used as the carcass of the fireplace (as opposed to statuary), because of the enormous material cost. As the contemporary practising architect Isaac Ware explained in 1756 in his influential A Complete Body of Architecture, ‘Variegated marbles are very expensive in the first purchase and some of them have a vast additional charge attending the cutting, Those to whom expense is a recommendation (and there are too many of this class) determine generally by this.’ (Chap. 4, p. 557) Satyrs, one the spirts of the woods and mountains, were attendants of Bacchus who by reputation were lazy and lecherous and spent their time drinking and chasing Nymphs in spring. They usually personify lust and were often depicted holding or carrying baskets of fruits. Stylistically the fireplace is close in design to the Westminster workshops of Sir Henry Cheere. Similar jamb decoration can be seen in the dining room fireplace of Came House, Dorset (C.L Feb 27, 1953, p.573, no 6) as well as another ex. Hanover Square, photographed in 1896 in the Arts Club, illustrated in Shuffrey’s book The English fireplace, 1912. on plate ciii. Provenance. Ex. Christopher Gibbs and thence Nigel Bartlett, advertised April 20th 1995 Previously Advertised by Spink & Son Ltd of King Street SW1.

About the Seller
No Reviews Yet
Located in London, United Kingdom
Vetted Seller
These experienced sellers undergo a comprehensive evaluation by our team of in-house experts.
1stDibs seller since 2008
27 sales on 1stDibs
Typical response time: 9 hours
More From This Seller

$24,200
George III Statuary and Sienna Marble Fireplace
Located in Tyrone, Northern Ireland
The breakfront shelf has mouldings decorated with bead and reel and egg and dart motifs, this above a Sienna marble frieze centred by an exquisitely carved tablet. The centre tablet ...
Category