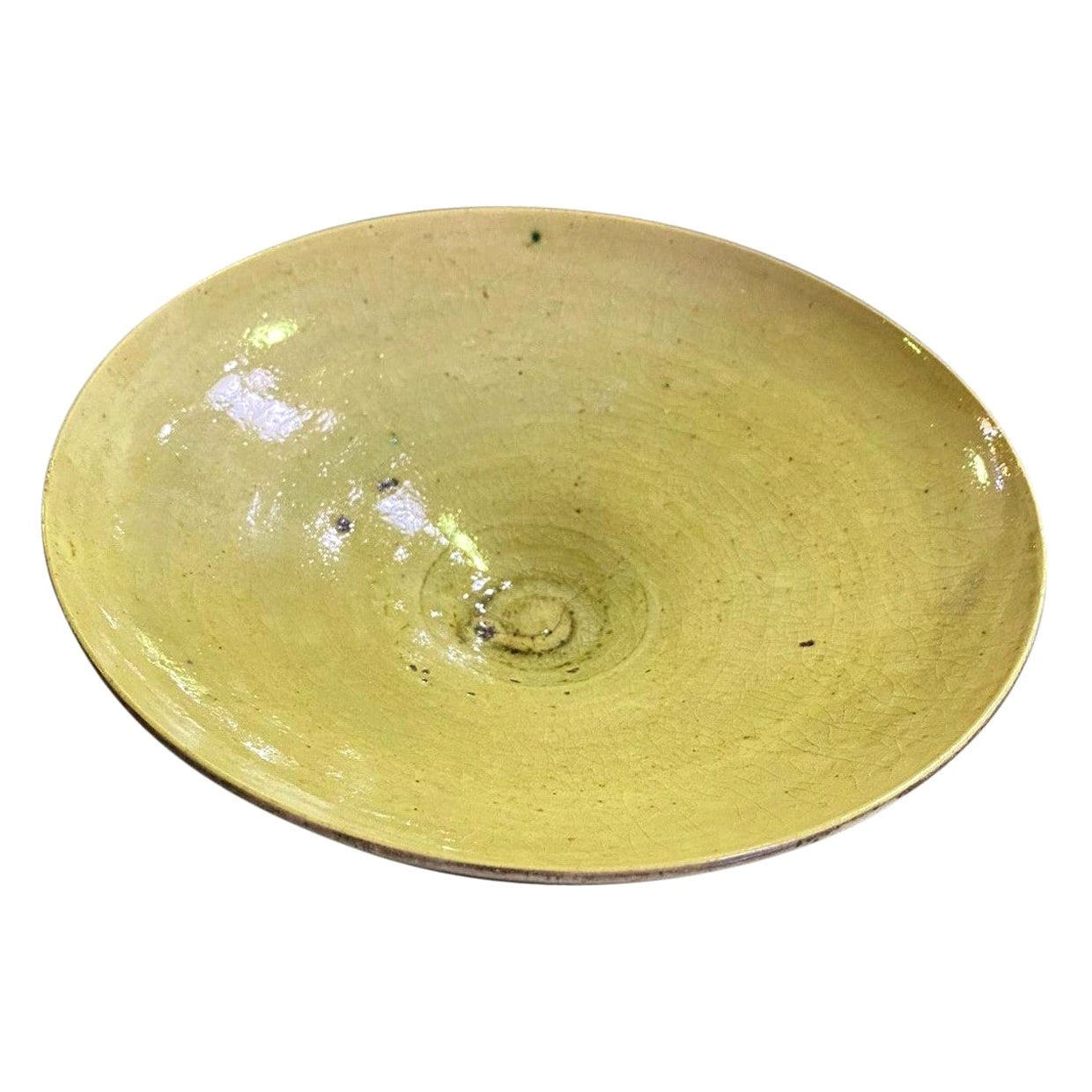 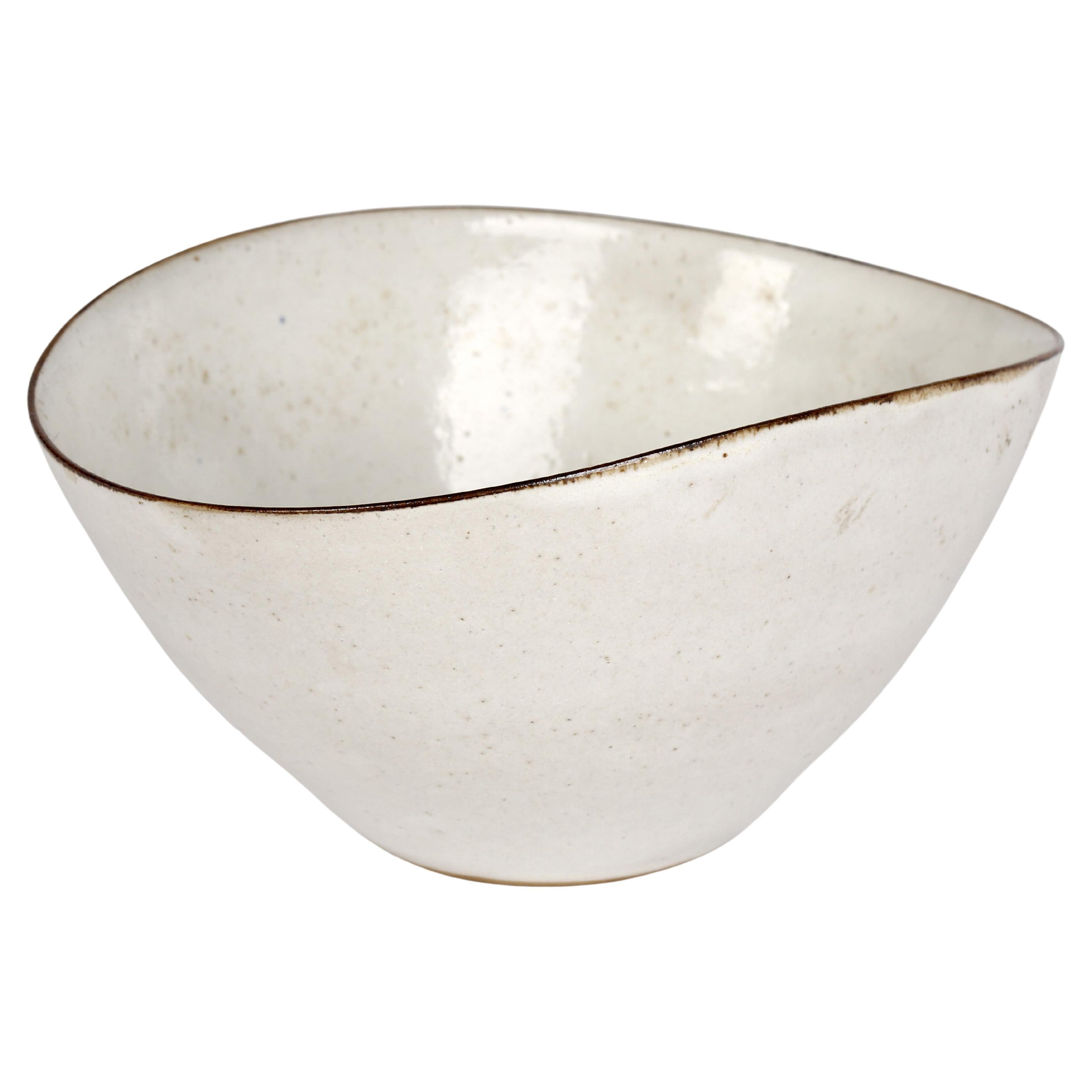 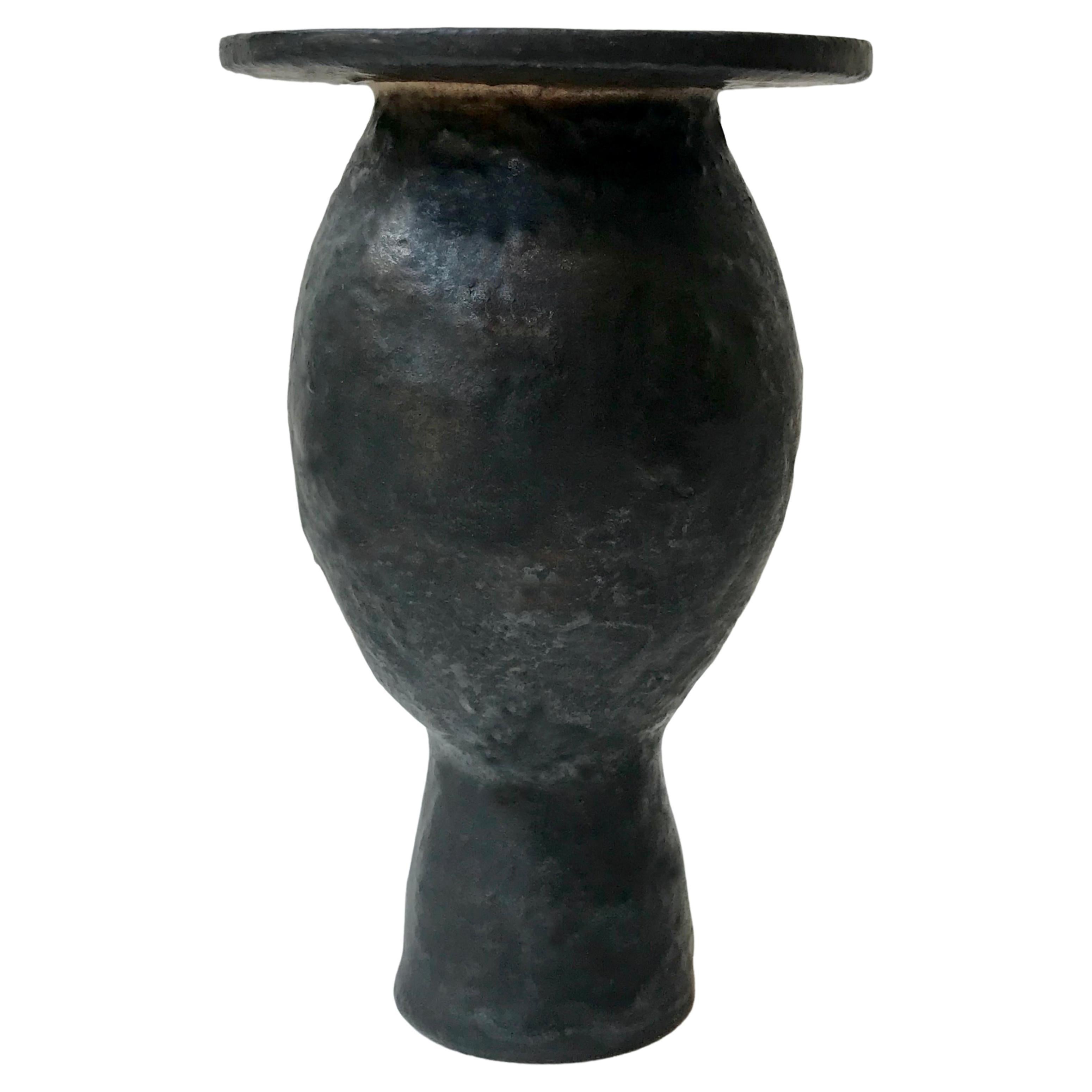 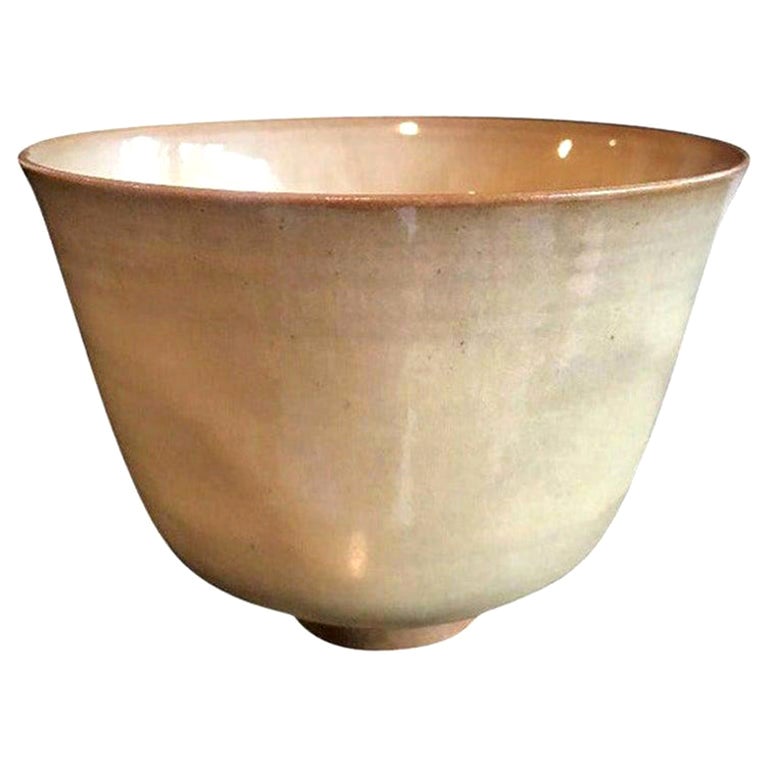 Ceramic Bowl or Cup with White and Green Glaze Decoration, circa 1950 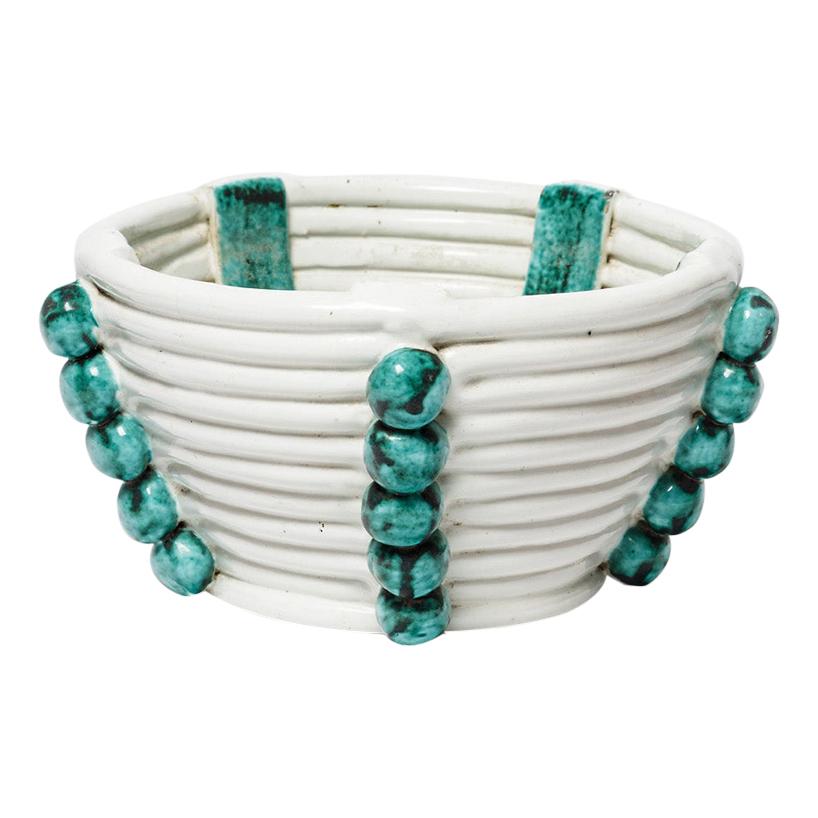 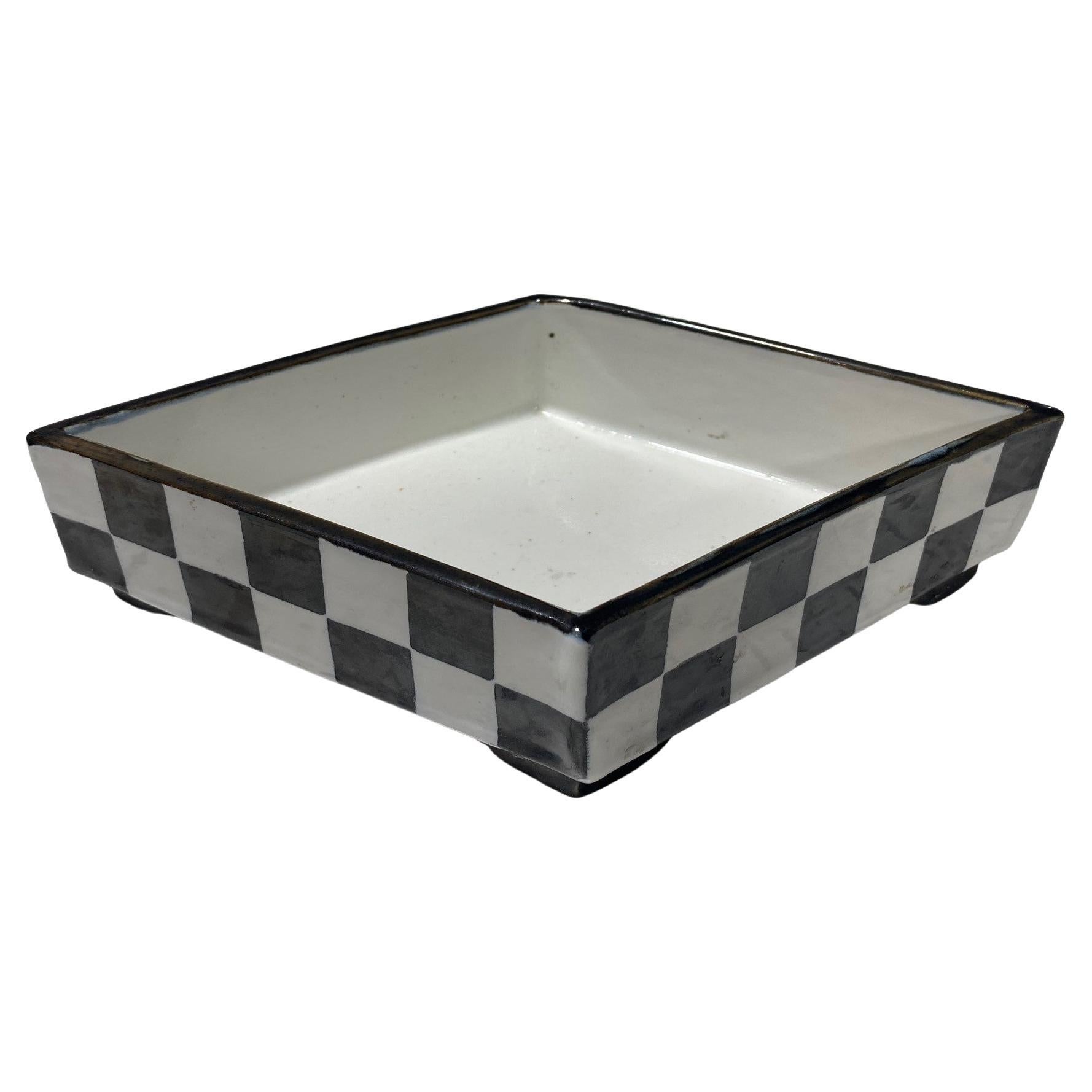 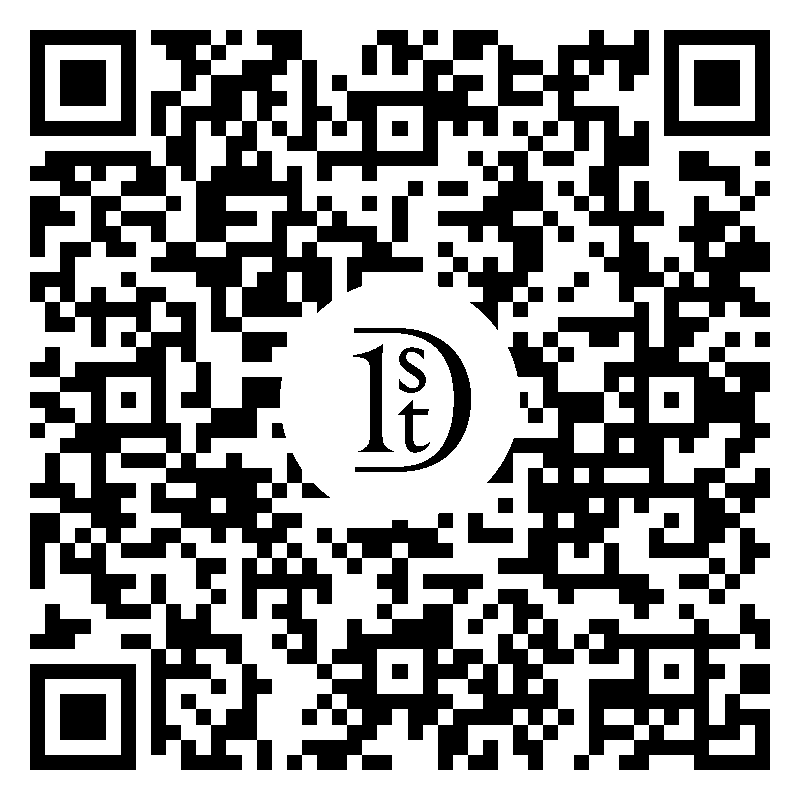 A gorgeous mustard-yellow glazed stoneware bowl with manganese rim by famed European potters Lucie Rie & Hans Coper. The bowl is signed with each artist's impressed seals on the base. Simply a must for any collector of Rie or Coper's work or a beautiful stand-alone piece sure to light up any setting. Lucie Rie was an Austrian-born studio potter. She was primarily known for her distinctive 20th century modernist style. She and her husband escaped to London in 1938 a few months before the start of the Second World War. After the war, Lucie met a youthful Hans Coper who was also living in exile (he was born in Germany in 1920). It was Coper, during this time while working as an assistant in Rie's studio, who convinced Lucie to return to the creations she originally made in Austria despite the initial lukewarm response to them in the UK. Coper, of course, went on to have an illustrious career in his own right. His works are found today in the collections of major museums around the world, including the Metropolitan Museum of Art, the Victoria and Albert Museum, Museum de Fundatie, the Sainsbury Centre in Norwich UK, and York Art Gallery, as well as in private collections worldwide. Rie's career needs little introduction. Her works can be found in such prominent museums as The Museum of Modern Art in New York, the York Art Gallery in the UK, the Carnegie Museum of Art in Pittsburgh, and the Paisley Museum in Scotland to name but a few. Her lifetime achievement awards include: 1968 Officer of the Order of the British Empire 1969 Honorary doctorate from the Royal College of Art 1981 Commander of the Order of the British Empire 1991 Dame Commander of the Order of the British Empire 1992 Honorary Doctorate from Heriot-Watt University Dimensions: 2.5" high, 5.25" diameter. 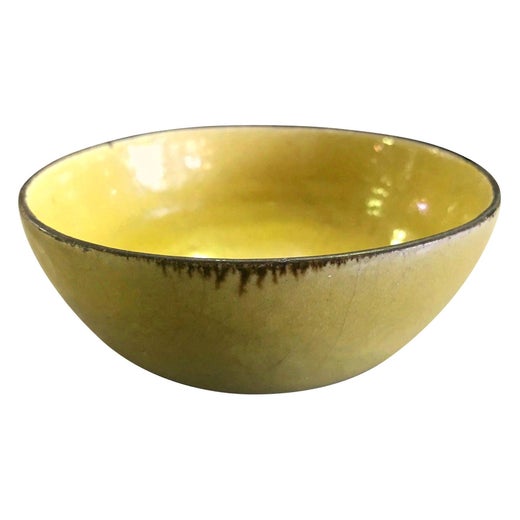 British studio potter Hans Coper was, along with his lifelong friend and studio partner Lucie Rie, among the most important figures in 20th-century ceramics. Although his work was never functional, he maintained a steadfast commitment to the vessel form and a belief that pots, not sculptures, are the “essence” of clay.

Coper was born in 1920 to a middle-class family in the town of Chemnitz, Germany. In 1939, with the Nazis in power, he emigrated to Great Britain, where he was promptly arrested as an enemy alien. Coper was sent to an internment camp in Canada returning to the United Kingdom in 1942. He served in the Pioneer Corps of the British Army until 1943 and remained in England for the rest of his life.

Coper came to ceramics in a roundabout way. After World War II, he did various jobs during the day to support himself, painting and drawing by night. In 1946, he sought work in a studio run by fellow European émigré Rie, who had fled Austria during World War II. Together, the pair produced ceramic buttons, but Rie, sensing in him a wellspring of untapped potential. sent Coper to the Woolwich School of Art for additional training.

When Coper returned, he and Rie turned their focus from buttons to tableware. During a period when Bernard Leach’s rustic, revivalist pottery was all the rage in Great Britain, Coper and Rie produced graceful, spare and decidedly modern pieces, often signed with the both their names. Gradually, their aesthetic caught on. While Rie focused on functional wares, Coper explored the sculptural possibilities of clay. She was invited to produce tableware for Heal’s Department Store in the 1950s, and he won a Gold Medal at the Milan Triennale in 1954, followed by a solo exhibition at Bonnier’s, in New York in 1956.

Coper typically created his vessels — which he gave simple, evocative names like “egg” and “spade” — by throwing a form on the wheel and then altering it to create a more sophisticated shape, often resembling a figure. His pieces are instantly recognizable by their surfaces, to which he applied dark oxides and slips to produce a subtle halo effect. His works tend to be imposing, but not monumental.

In 1958, Coper left Rie and set up his own studio in Digswell House in Hertfordshire. There he joined the Digswell Arts Trust collaborative, established by the teacher Henry Morris, who sought to connect culture with industry in an artistic setting. Working alongside artists and designers in other mediums, Coper expanded his practice to encompass ceramic components for buildings. In 1962, he was awarded a commission to design candlesticks for Coventry Cathedral.

Coper returned to London in 1963 and in 1966 began teaching at the Royal College of Art, where he remained until 1975. He continued to exhibit his work with Rie throughout the 1960s and ‘70s. In 1969, he was invited to take part in a two-man exhibition with textile artist Peter Collingwood at London’s Victoria & Albert Museum that featured new work by both artists. The show contained more than 100 of Coper’s vessels, including, in their debut appearance, his “Cycladic” pots, which were inspired by the bold, expressive sculptures of the civilization that flourished on the Cycladic islands from approximately 3200 to 2000 BC. Other exhibitions followed, in international venues, from Japan to Denmark to the United States.

Suffering from amyotrophic lateral sclerosis, Coper stopped working in his studio in 1979 and died at home in 1981. In the decades since, Coper and Rie have become icons of 20th century ceramics, and their highly sought-after works are represented in the collections of major museums, including the Victoria and Albert; New York’s Metropolitan Museum of Art; and the Ceramics Research Center at the Arizona State University Art Museum, in Tempe.

1stDibs Buyer Protection Guaranteed
If your item arrives not as described, we’ll work with you and the seller to make it right. Learn More
About the Seller
4.9
Located in Studio City, CA
Platinum Seller
These expertly vetted sellers are 1stDibs' most experienced sellers and are rated highest by our customers.
1stDibs seller since 2016
626 sales on 1stDibs
Typical response time: <1 hour
More From This SellerView All
People Also Browsed
You May Also Like