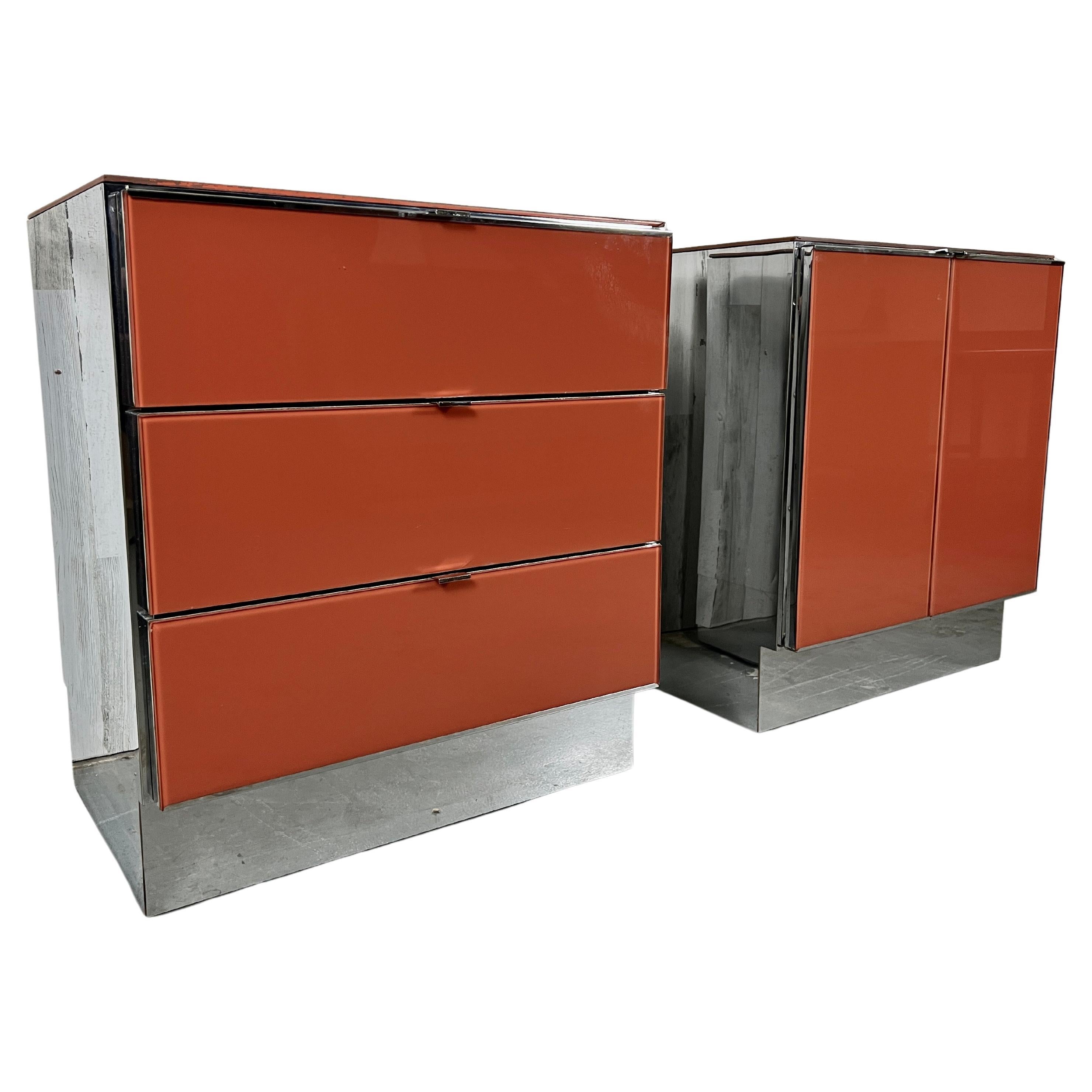 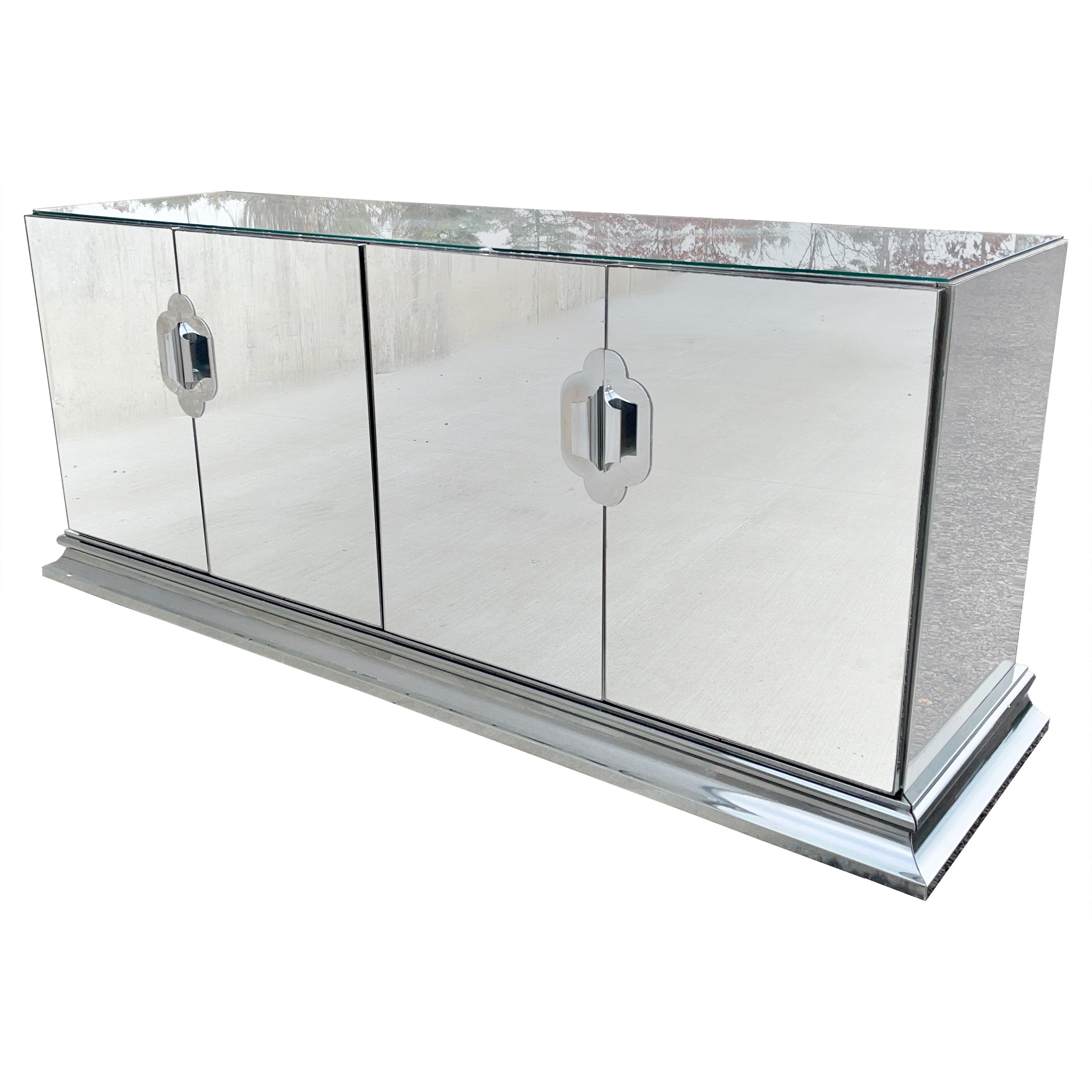 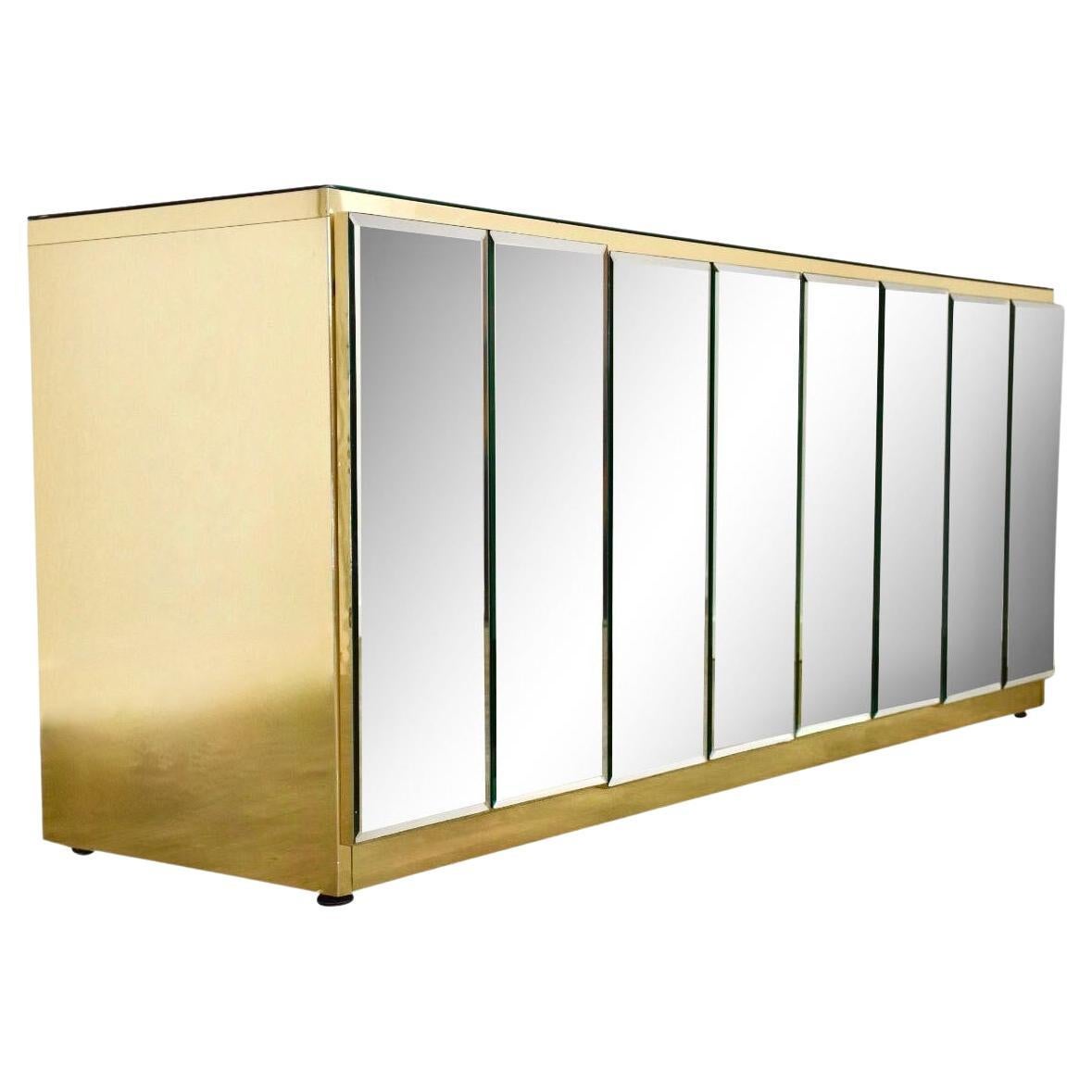 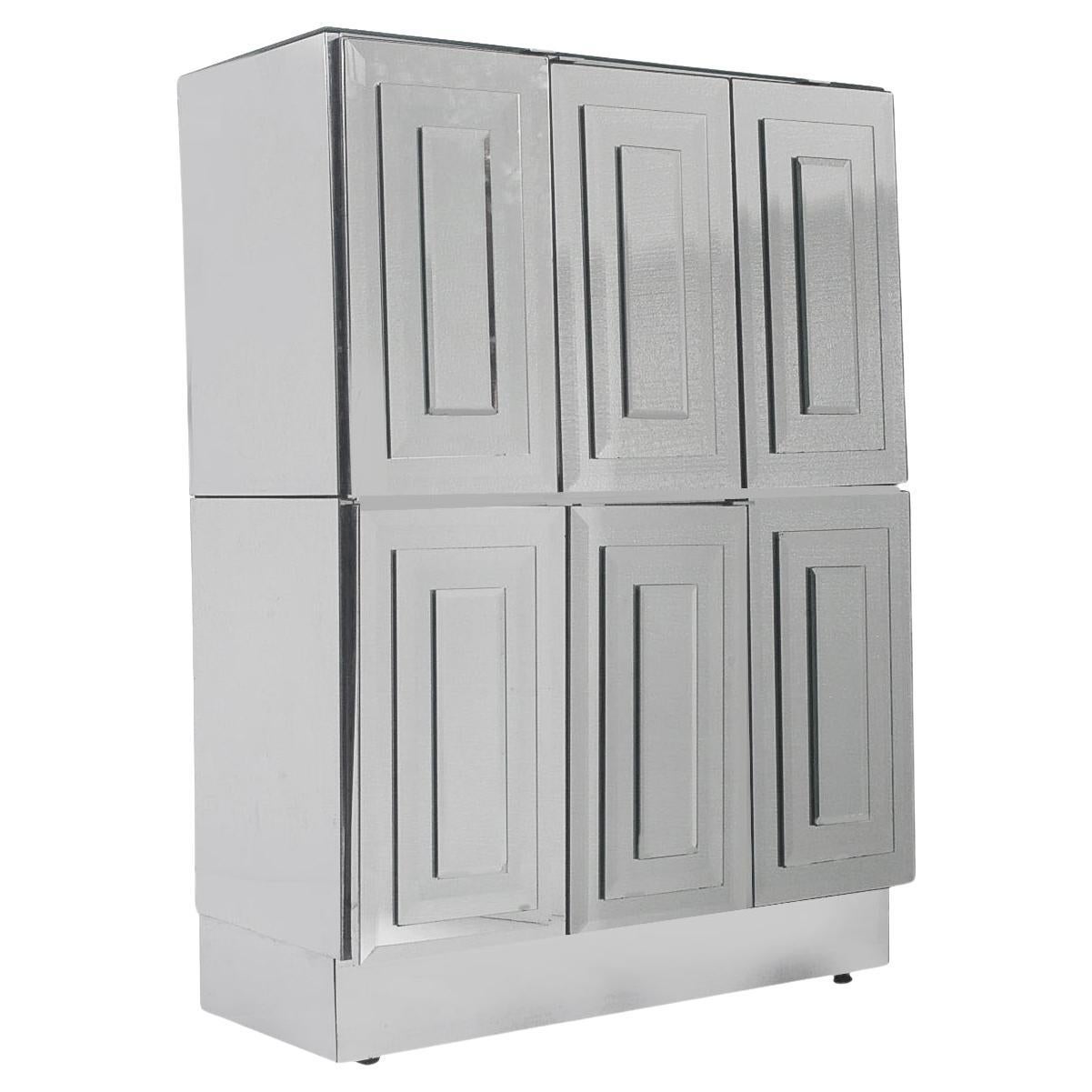 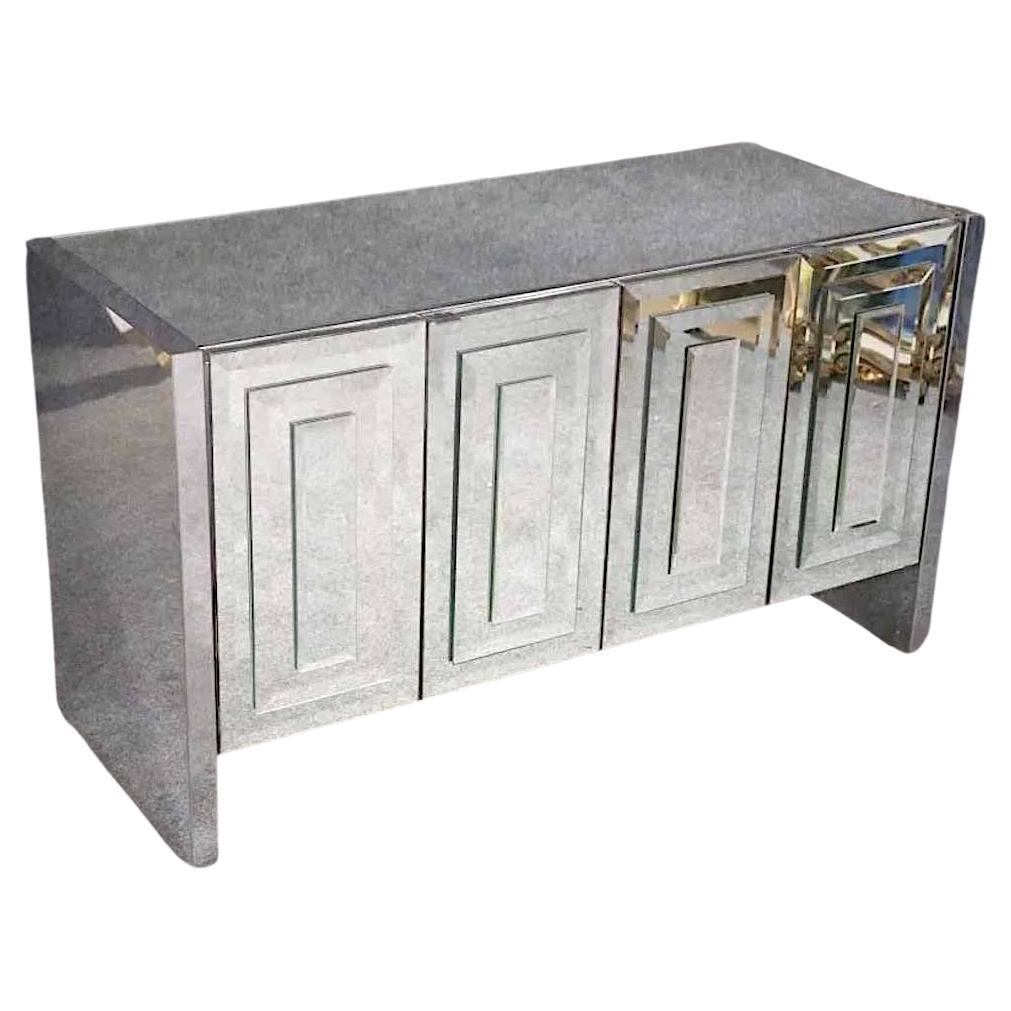 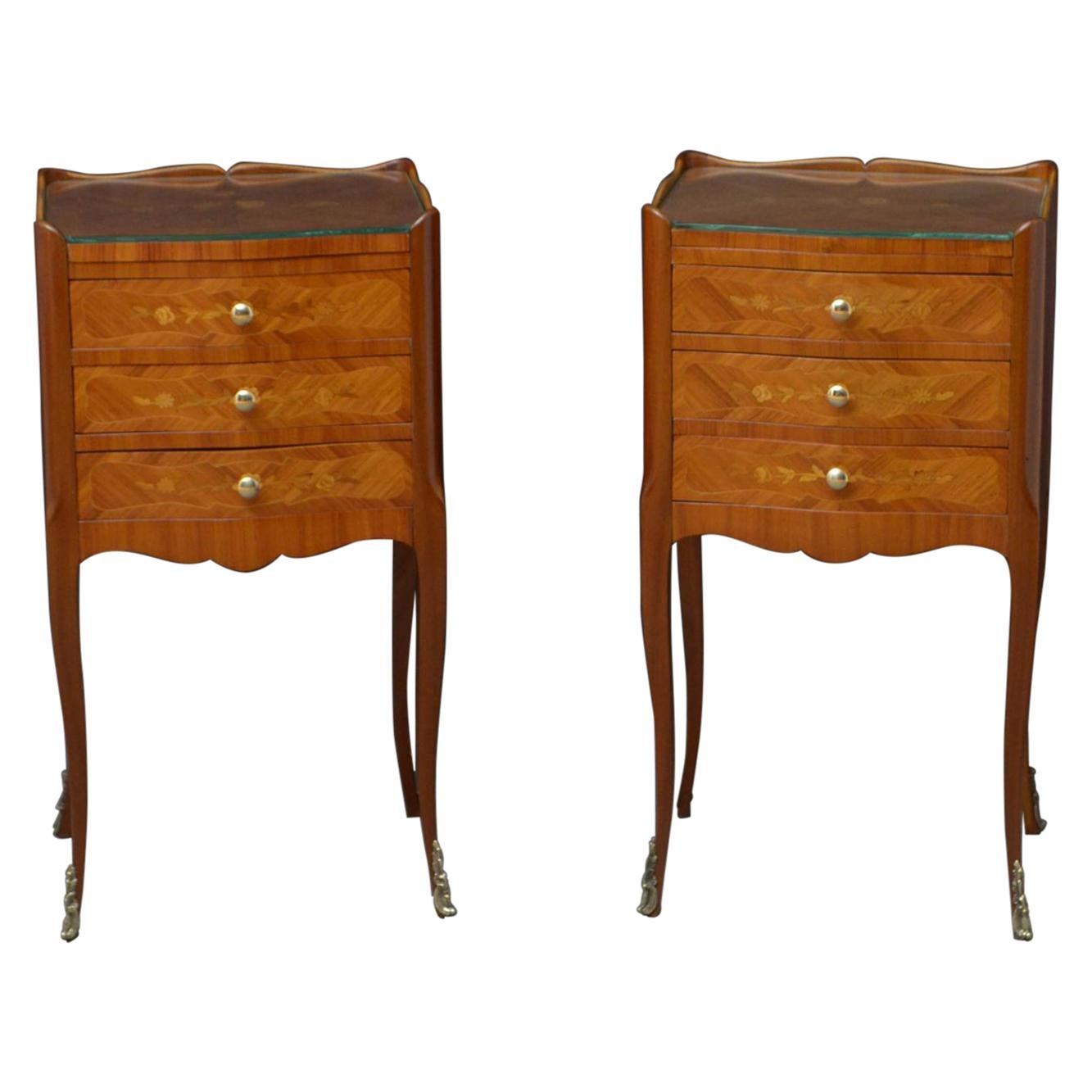 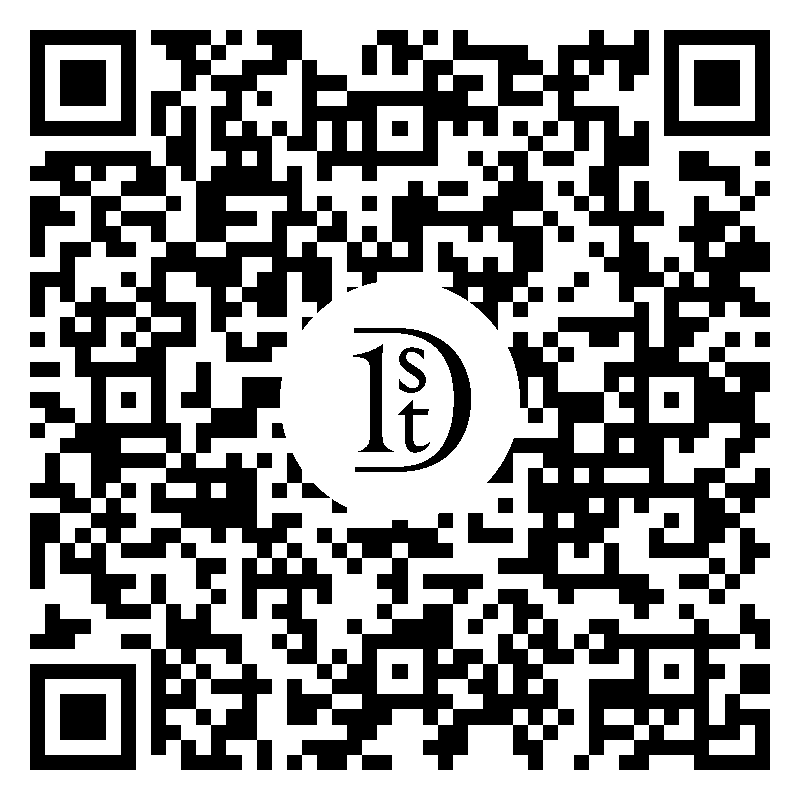 Pair of mirrored cabinets or oversized nightstands by O.B. Solie for Ello Furniture Manufacturing Corp. clad on four sides in beveled blue/grey smoked mirror and trimmed in brass and brass anodized aluminum. Both have double doors with magnetic spring closures. One has open space divided by a single horizontal fixed shelf while the other has three open drawers. Quite heavy. Sold as a pair. Quite clean overall with a couple of tiny dents to metal trim and scratches to glass. The chest with the shelf has a small chip to the lower-left corner of the left door and a tiny sliver of silver separation to the underside of the glass on the top right front corner. See images 18 and 19. 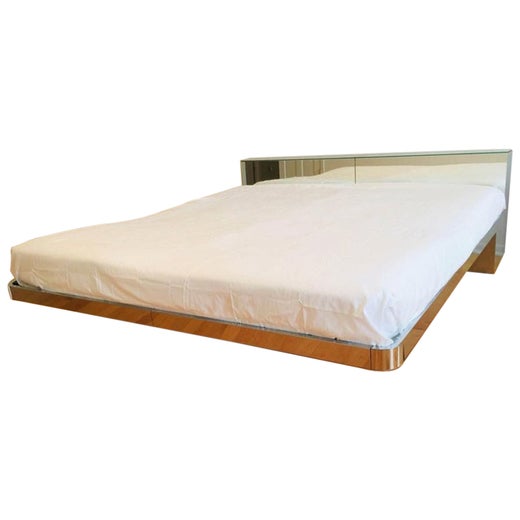 Ello founder Lothar H. Molton (1926-2012) took his family and fled Nazi-occupied Germany and established his furniture company in Chicago, Illinois, in 1956 as a garage operation. In 1968, the company moved to the renowned furniture town of Rockford, where many of the country's most well-known producers once set up manufacturing operations. Over the next four decades, Ello enjoyed great success as a producer of furniture and an importer, growing into a 150,000-square-foot warehouse and a 200,000-square-foot manufacturing plant.

Though more often featuring an integration of flashy brass accents and materials such as travertine versus the dark woods and clean lines associated with mid-century modern design, Ello furniture was known in its heyday for being as practical as it was stylish. The company's motto was "Contemporary Furniture of Distinction," and their designs were highly functional with just the right amount of flair for the modern home.

In 1976, the Fort Lauderdale News and Sun-Sentinel described an Ello modular wall unit as "a rare combination of function plus spectacular glamour." Ello also collaborated with well-known designers of the era, like O.B. Solie. During the 1970s, Solie worked with mirrored glass, bronze, oak and more to design a range of tallboys, chests, sideboards and other pieces that boasted gilt brass escutcheons and brushed chrome drawer pulls.

In its prime, Ello held annual inventory clearance sales that attracted hundreds of customers. People lined up around the warehouse, sometimes camping out days in advance. Sales started to become more frequent, and in 2010, Ello closed its doors. In 2011, they auctioned off the rest of their merchandise.

1stDibs Buyer Protection Guaranteed
If your item arrives not as described, we’ll work with you and the seller to make it right. Learn More
About the Seller
4.9
Located in Hanover, MA
Vetted Seller
These experienced sellers undergo a comprehensive evaluation by our team of in-house experts.
Established in 2008
1stDibs seller since 2010
835 sales on 1stDibs
Typical response time: 1 hour
More From This SellerView All
People Also Browsed
You May Also Like