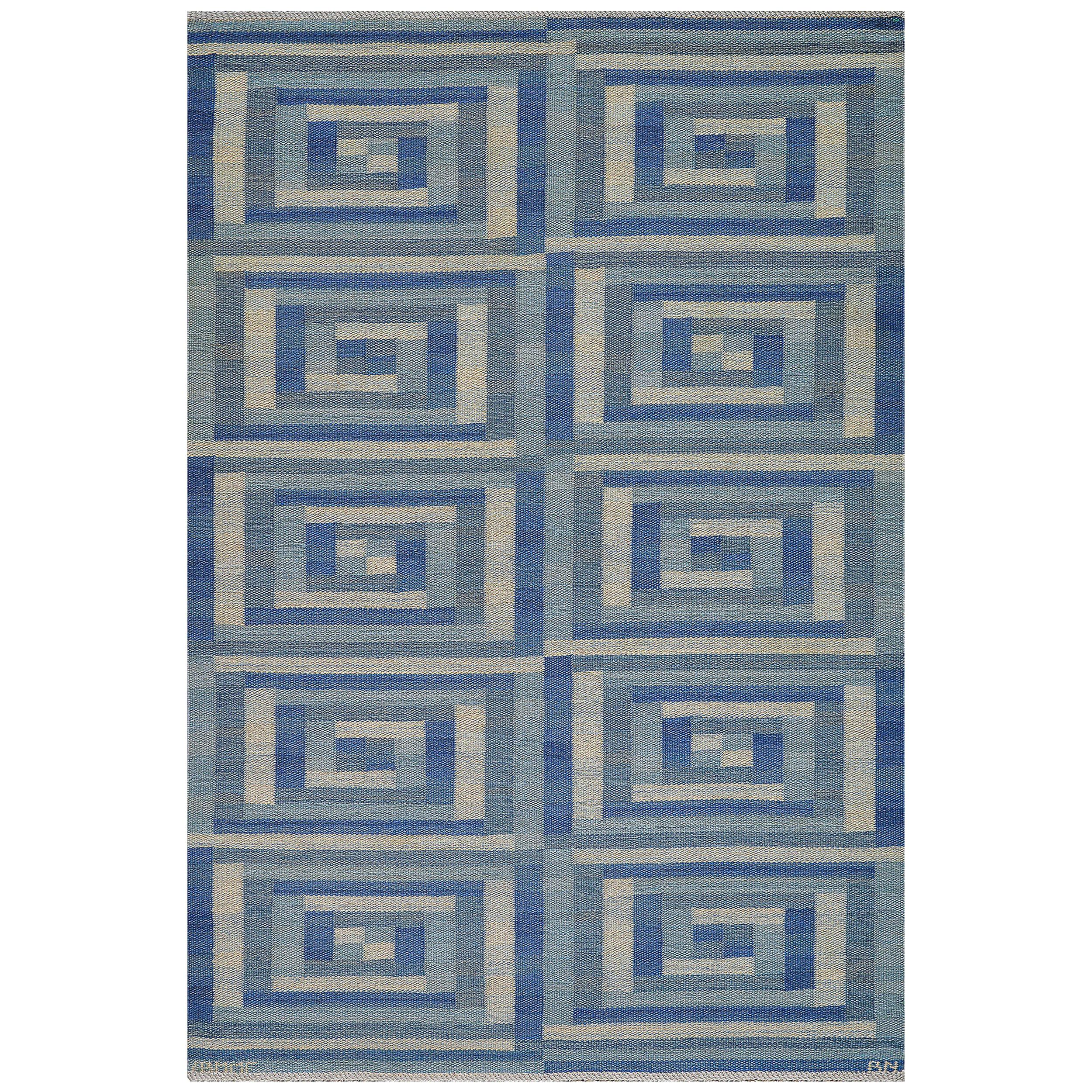 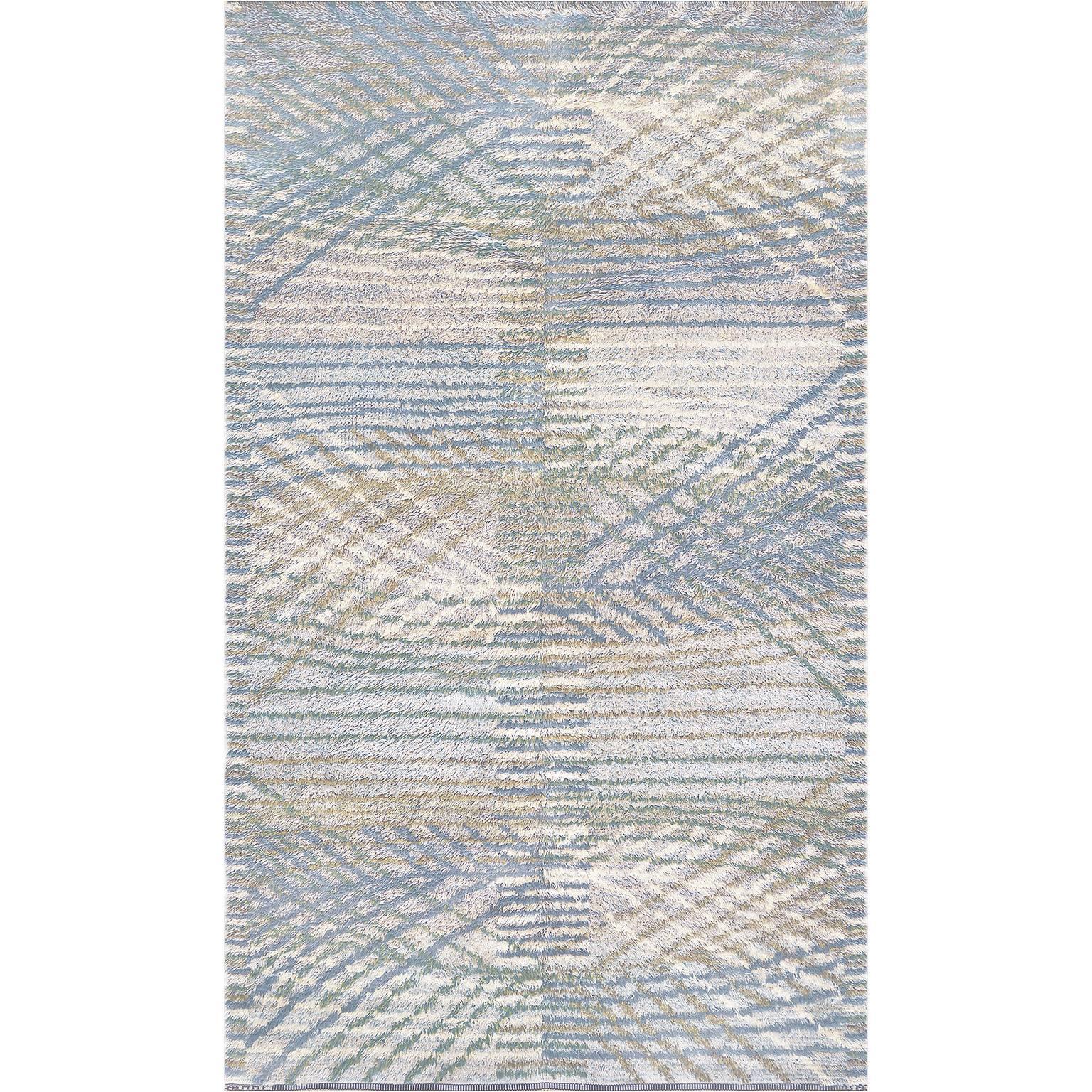 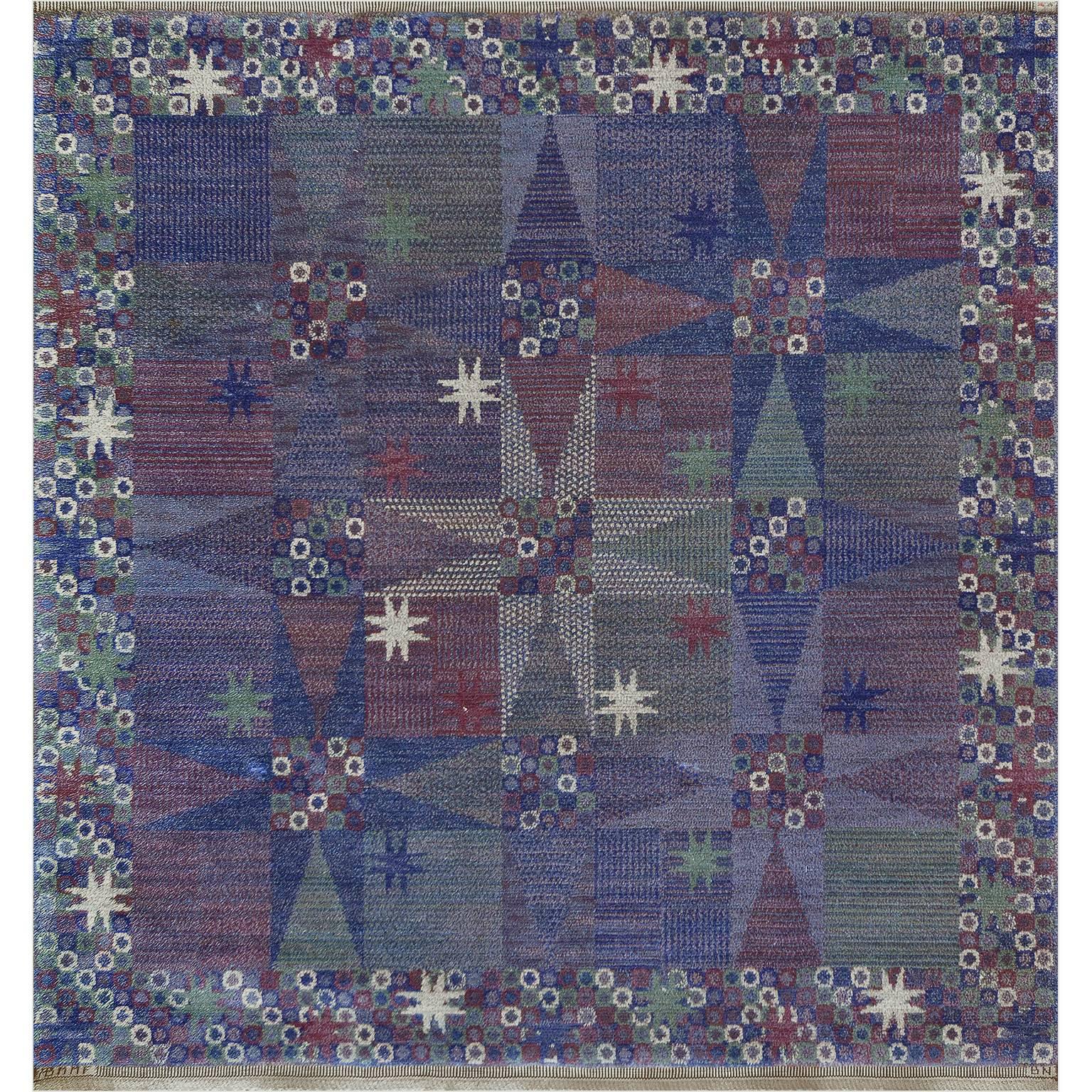 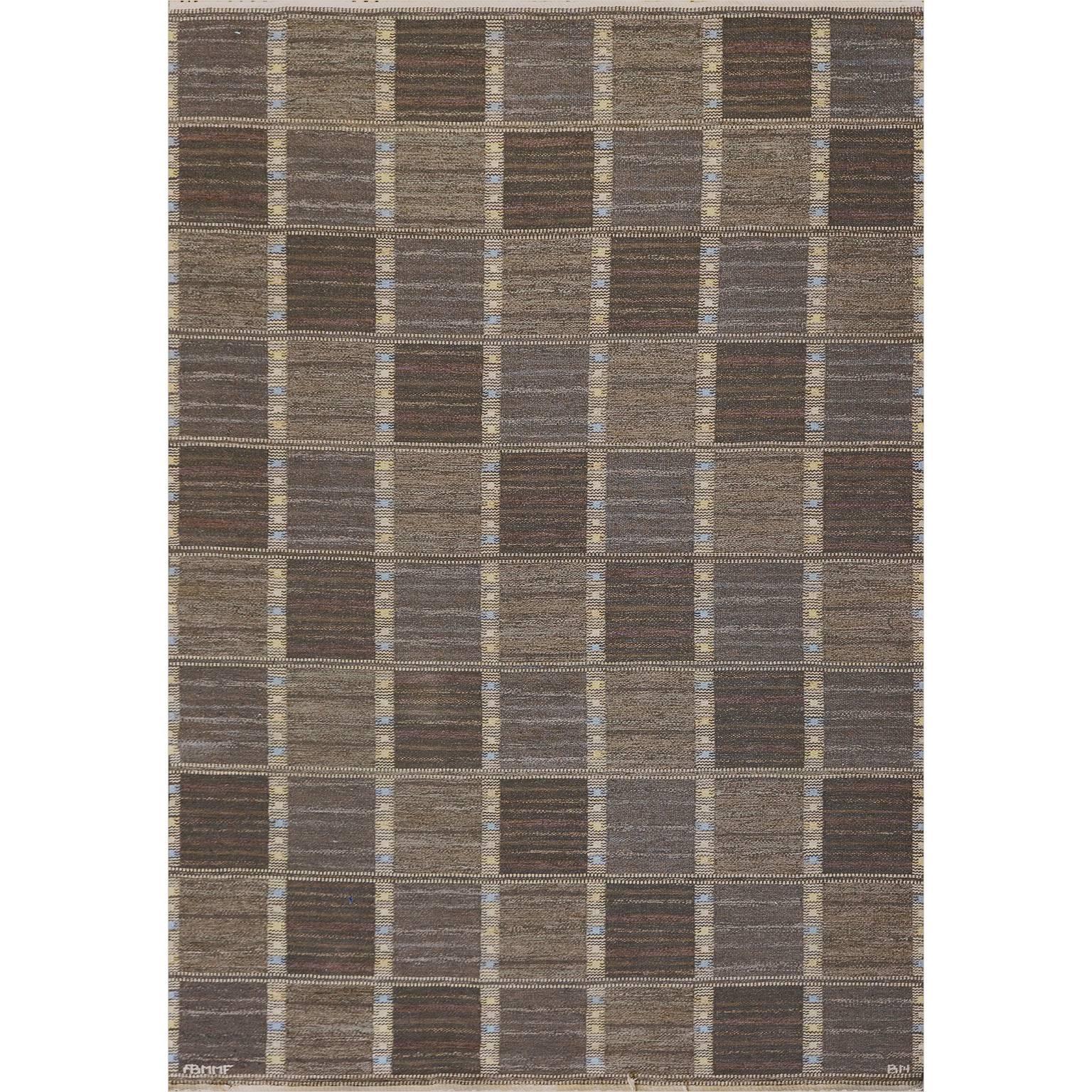 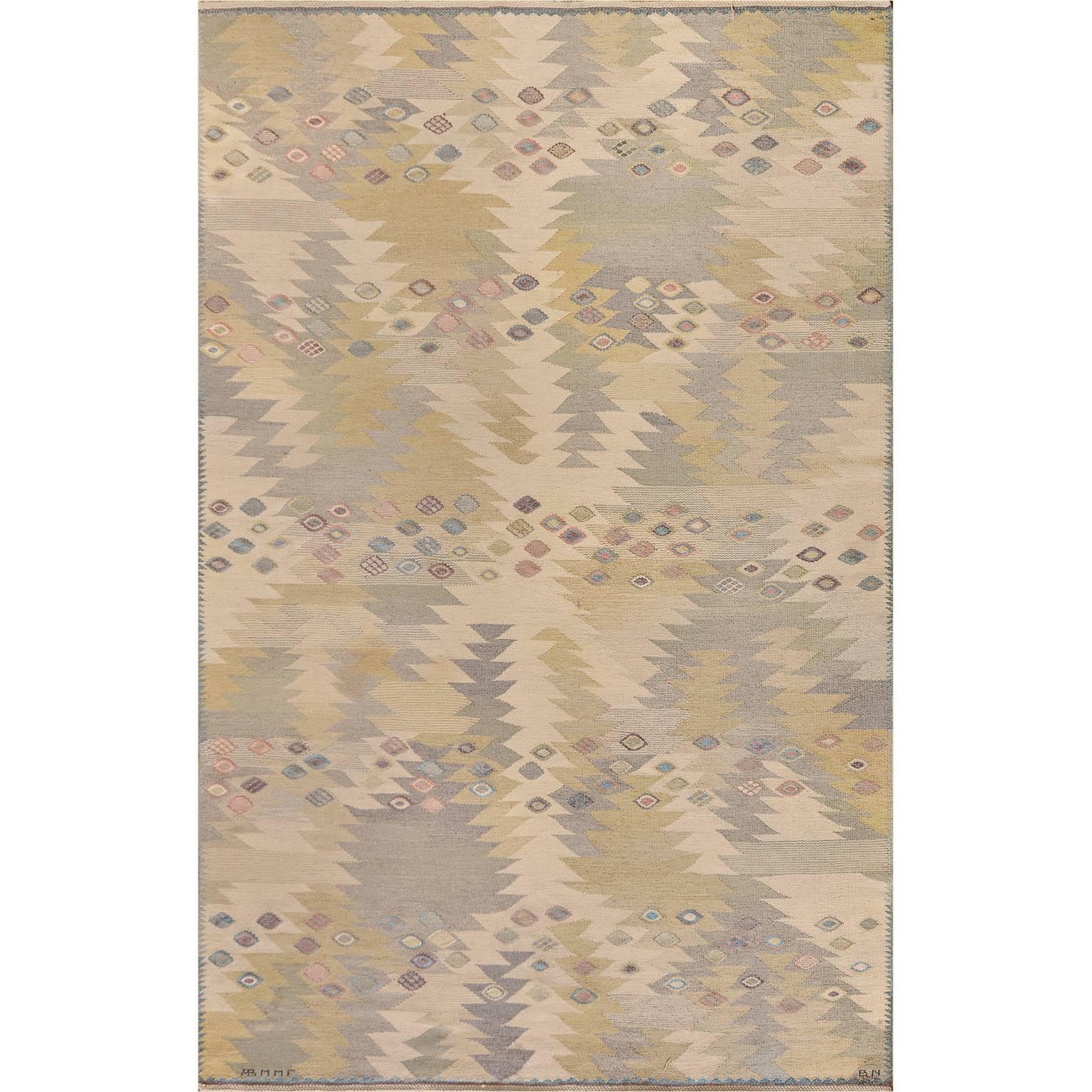 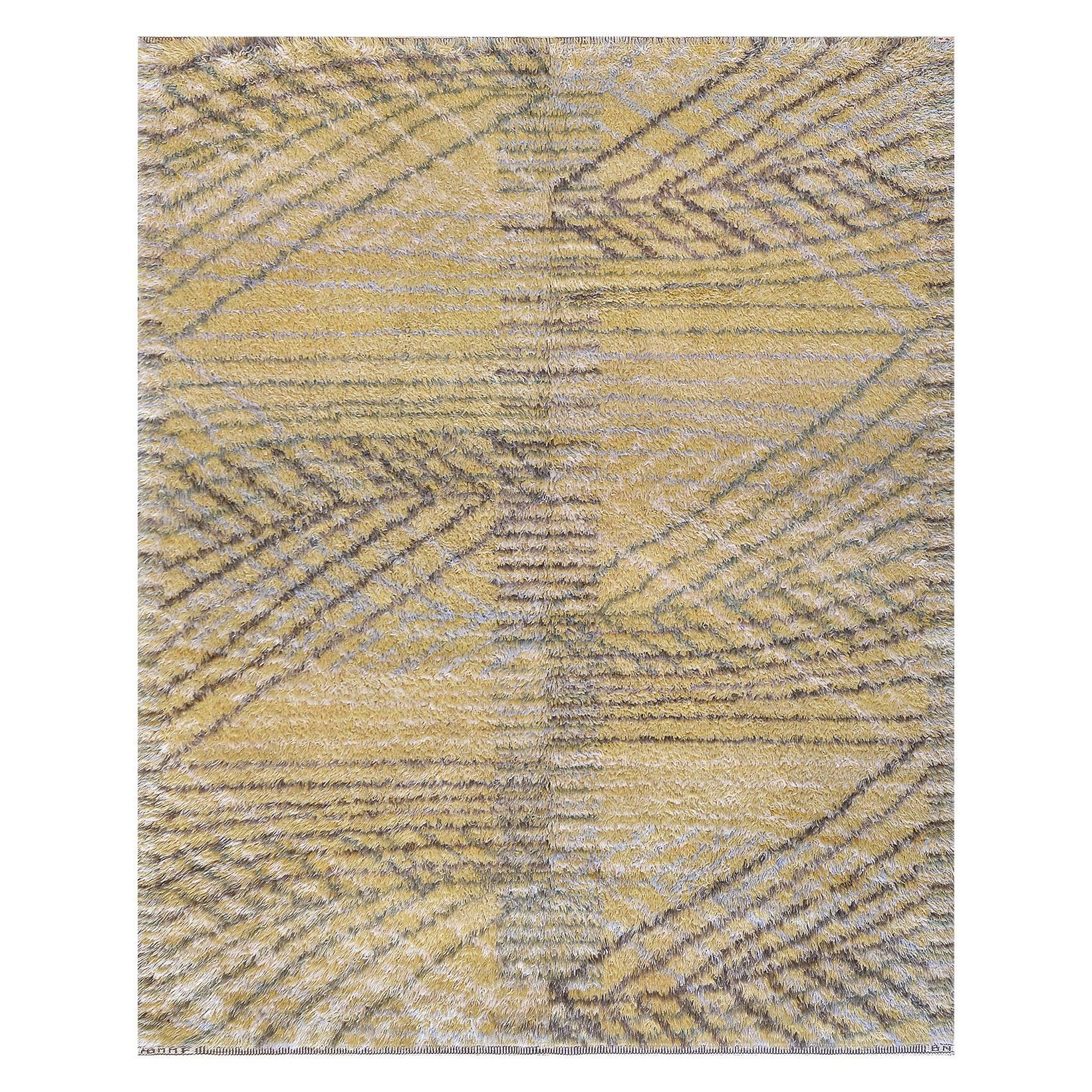 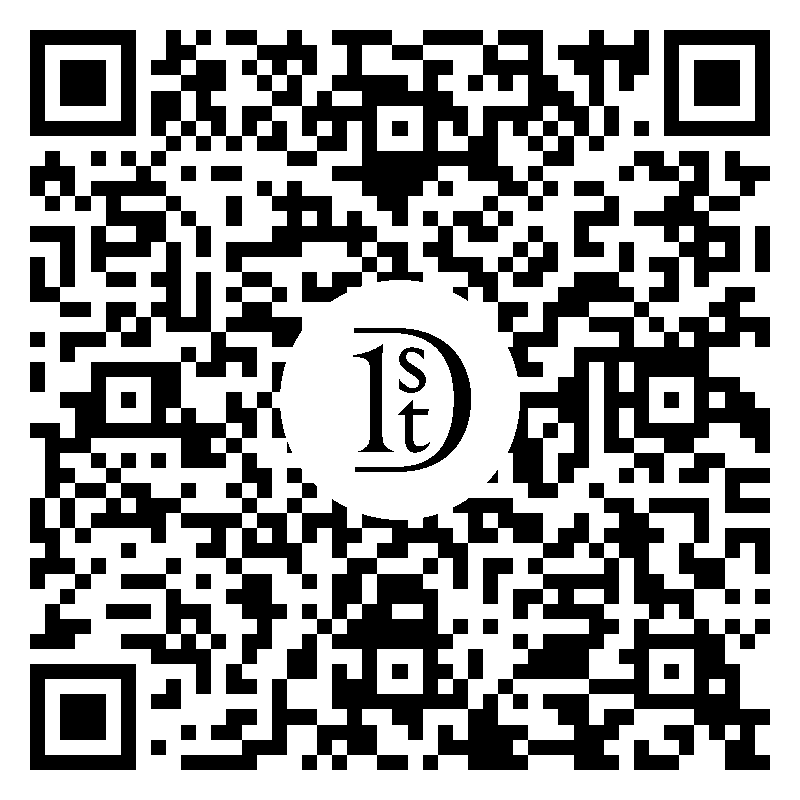 This traditional handwoven Swedish flat-weave has an overall field of blue, grey and beige striae with alternating rows of waving diagonal lozenges, in an unusual playful striped border. Signed piece. About the master weaver: The Mid-Century Swedish paradigm would not exist without the contributions of Marta Maas-Fjetterstrom. Born in June of 1873, she went on to open her workshop in 1919 and produced a prolific collection of Swedish rugs until her passing in 1941. Her rugs were known for featuring bright pastel geometric patterns and stylized representations of the natural world. Mid-Century designers, collectors and consumers all-over the world covet her work dearly, as evidenced by the scores of Swedish designers that followed in Marta’s footsteps. 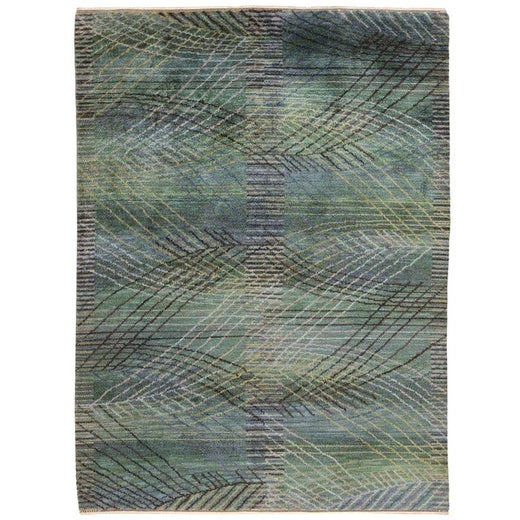 About the Workshop Studio

Märta Måås-Fjetterström was the leading figure in Swedish textile design in the early 20th century. Through her rug-weaving studio, Måås-Fjetterström introduced a modern and cosmopolitan spirit to the tradition-bound craft, creating some of the era’s most sublime rugs and carpets — works that are elegant yet have a handmade warmth and honesty.

She traveled widely in search of design inspirations, and in 1919 — thanks in large part to the patronage of Ludvig Nobel, grand-nephew of Alfred Nobel, who commissioned her to make all the rugs for a new country manor hotel — Måås-Fjetterström opened her own workshop. There she trained many of Sweden’s best modern weavers, including Barbo Nilsson and Marianne Richter (the mid-century modernist designer Richter took over leadership of the Måås-Fjetterström factory after its founder's death in 1941). A major exhibition in Stockholm in 1934 brought public acclaim, a reputation secured worldwide by exhibitions at the British Museum in 1936 and the Metropolitan Museum of Art in New York in 1939. Måås-Fjetterström’s company, MMF AB, is still in operation, and most of her roughly 700 designs are available for fabrication.

A broad range of influences can be seen in Måås-Fjetterström’s designs, among them Art Nouveau and classic Near Eastern and Asian styles. Her rug patterns fall roughly into two groups: The first includes stylized floral and other naturalistic motifs as well as modernized folkloric themes. The second comprises those employing geometric “tiles” in a formal composition based on that of Persian rugs, with an intricate border surrounding a central medallion.

Måås-Fjetterström generally used a subtle color palette: Soft pastels predominate, punctuated by the odd vibrant note. Her rugs are remarkable for their flexibility of use in decor schemes. They are a perfect complement to simple modern furniture in both blond and darker finishes; at the same time, the rugs can act as a perfect calming foil to more ornate historical styles. Måås-Fjetterström's creations, particularly signed vintage pieces, are highly collectible. Her designs are found in the world's leading museums, including the Metropolitan Museum of Art, the Victoria & Albert Museum and the Nationalmuseum in Stockholm.

Find a collection of vintage Märta Måås-Fjetterström rugs and carpets on 1stDibs.

About the Seller
No Reviews Yet
Located in West Hollywood, CA
Vetted Seller
These experienced sellers undergo a comprehensive evaluation by our team of in-house experts.
Established in 1984
1stDibs seller since 2015
21 sales on 1stDibs
Typical response time: 1 hour
More From This Seller

$65,000
Scandinavian Modern Rya Pile Rug by Barbro Nilsson, Märta Måås-Fjetterström AB
By Märta Måås-Fjetterström AB 1, Barbro Lundberg-Nilsson
Located in Stockholm, SE
Scandinavian Modern "Tigerfällen" rug by artist Barbro Nilsson was designed 1943 for MMF atelier in Båstad. In the supreme court of Stockholm there is a copy of the same rug. This pa...
Category