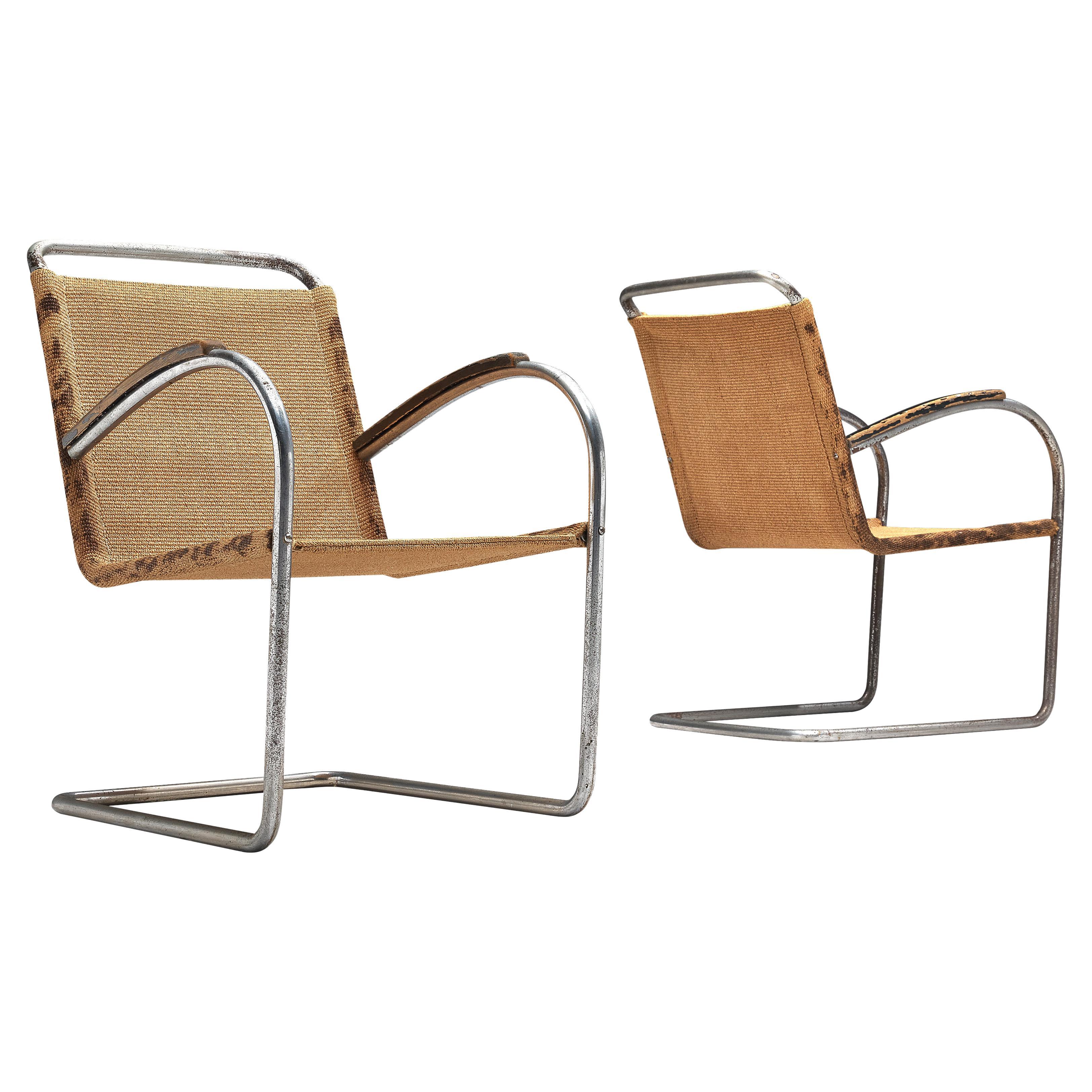 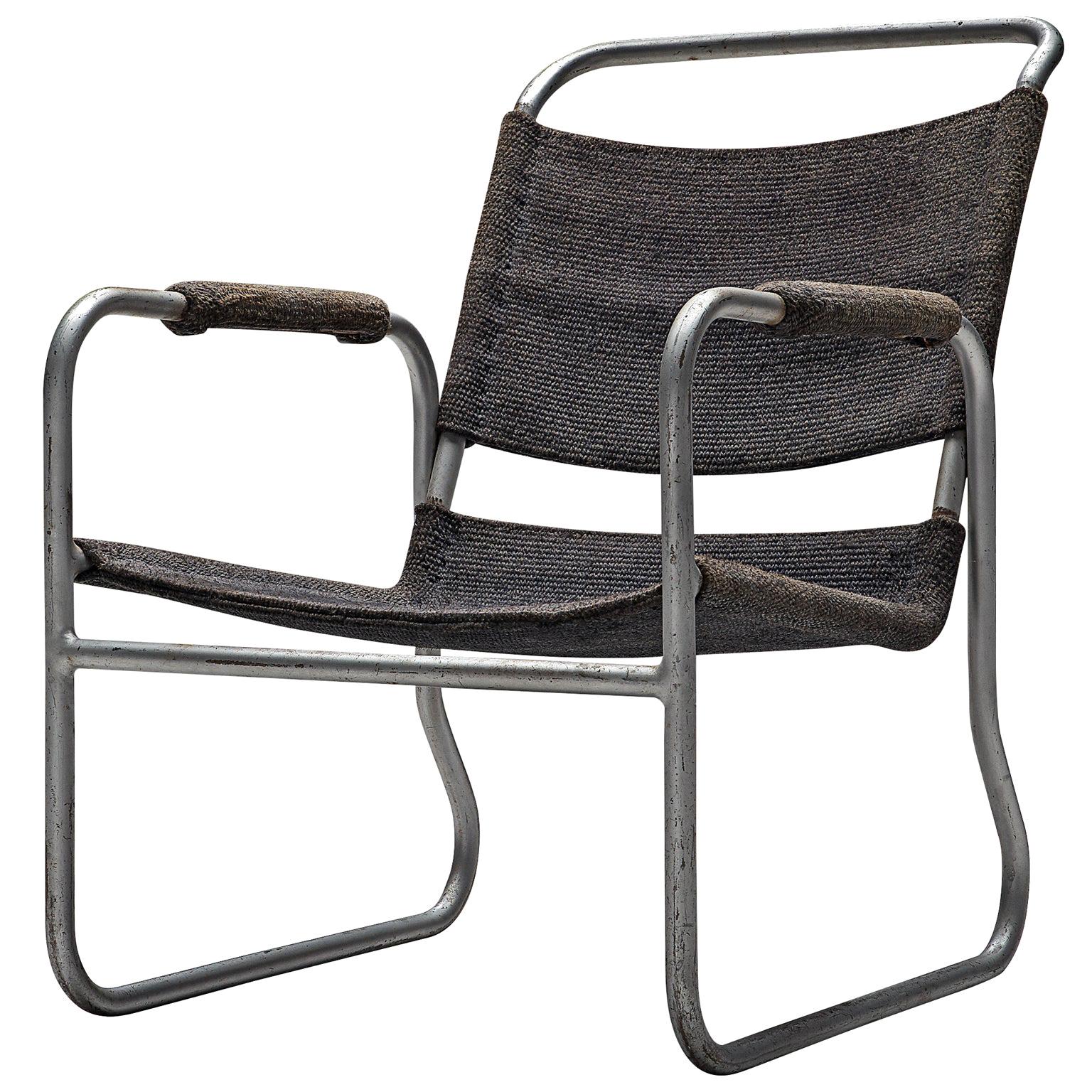 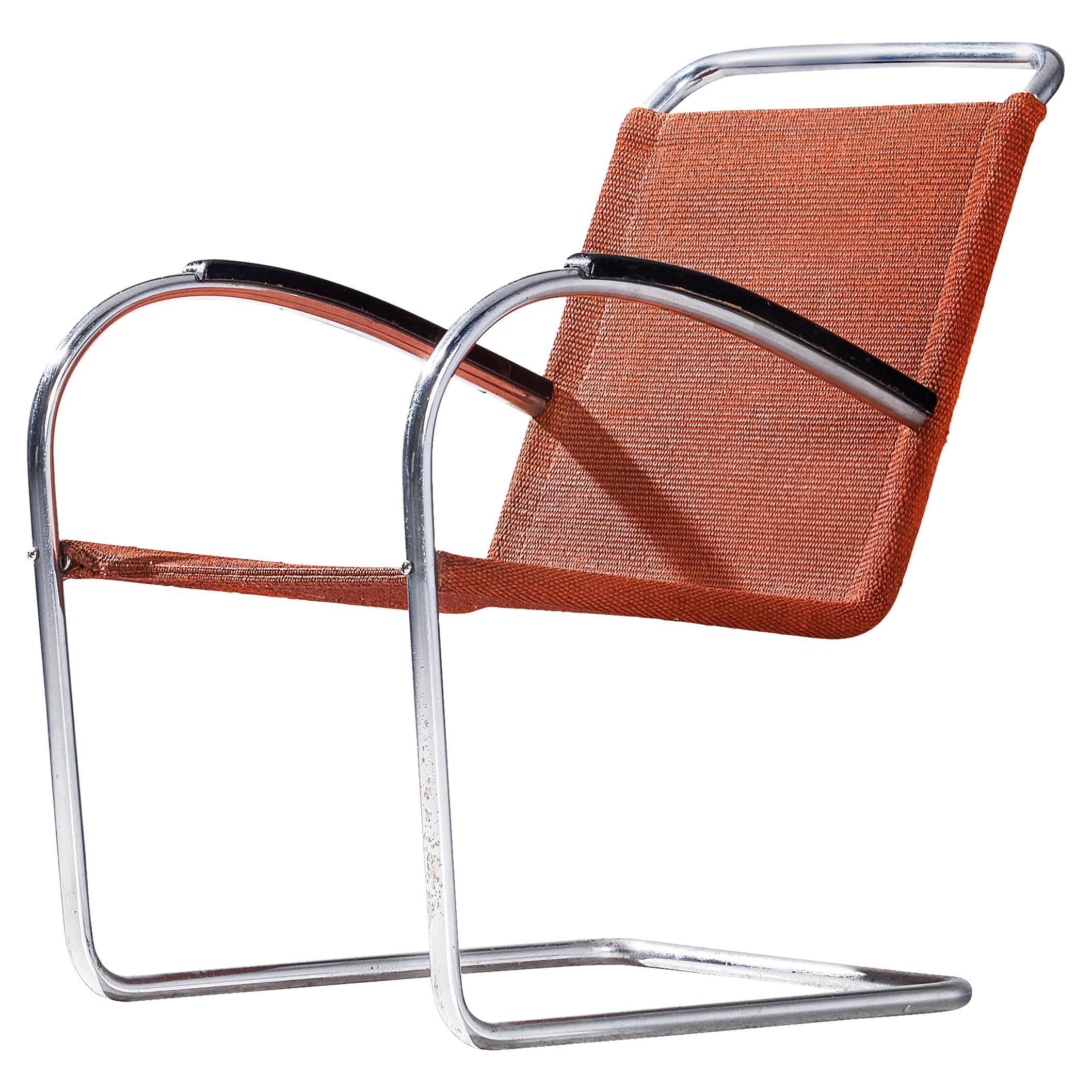 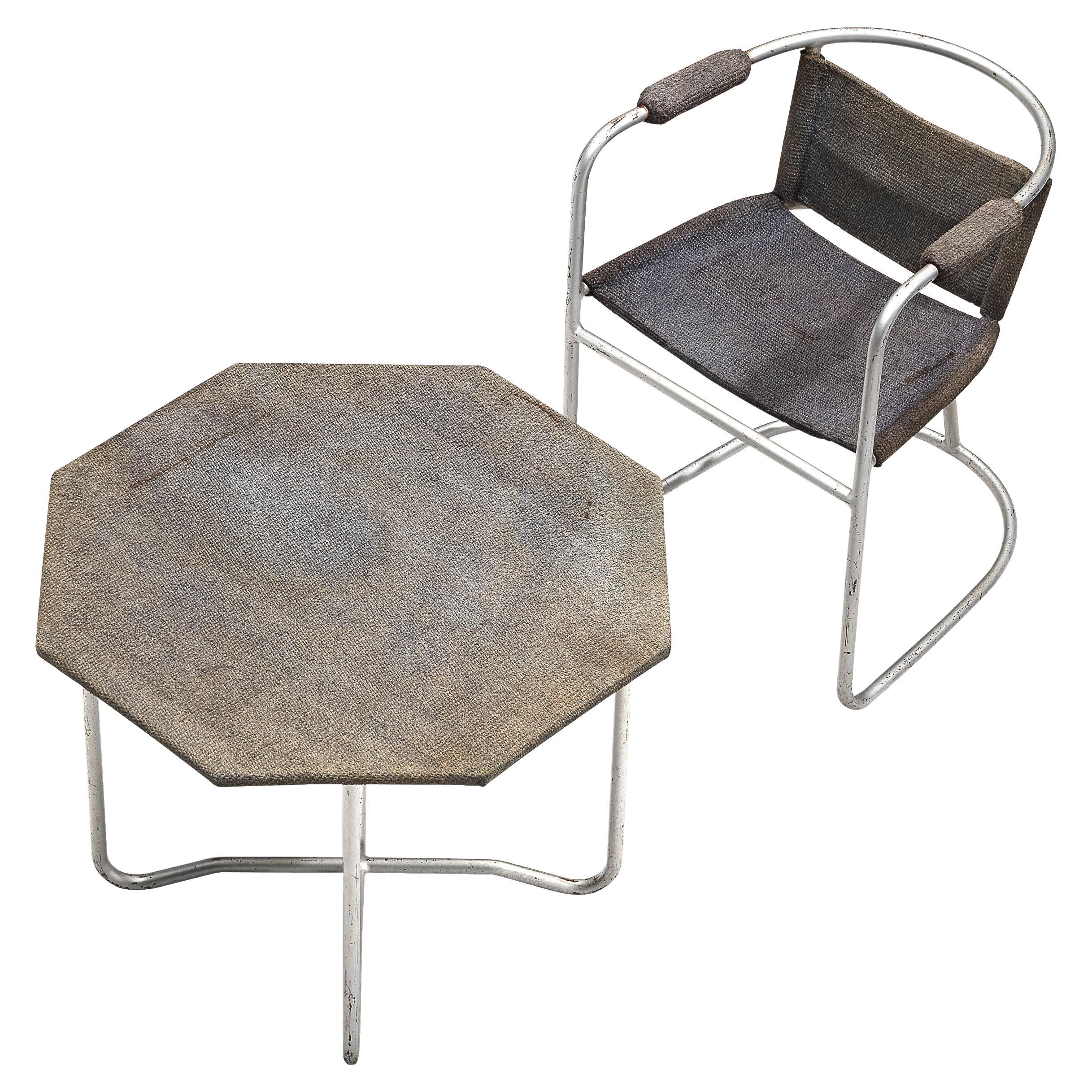 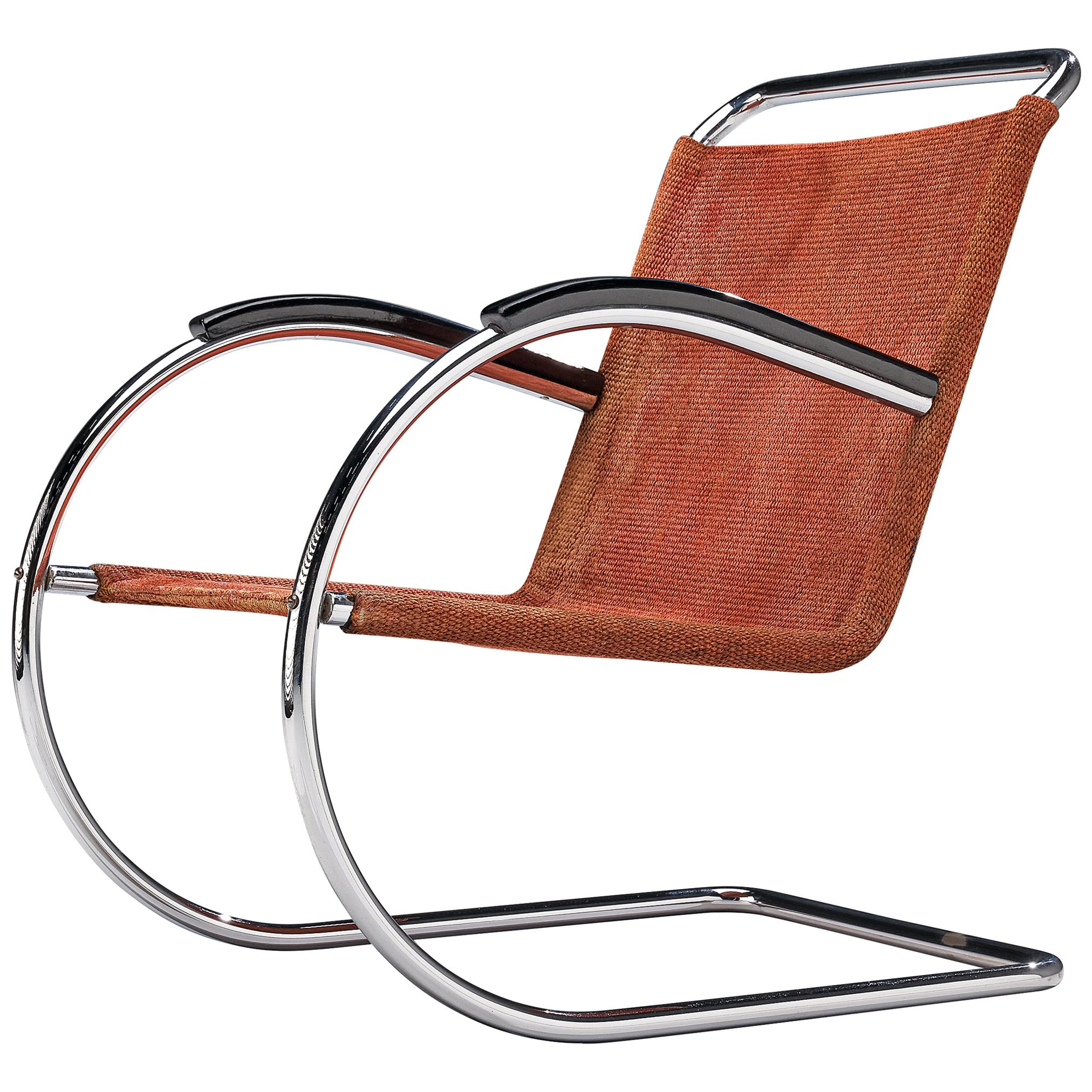 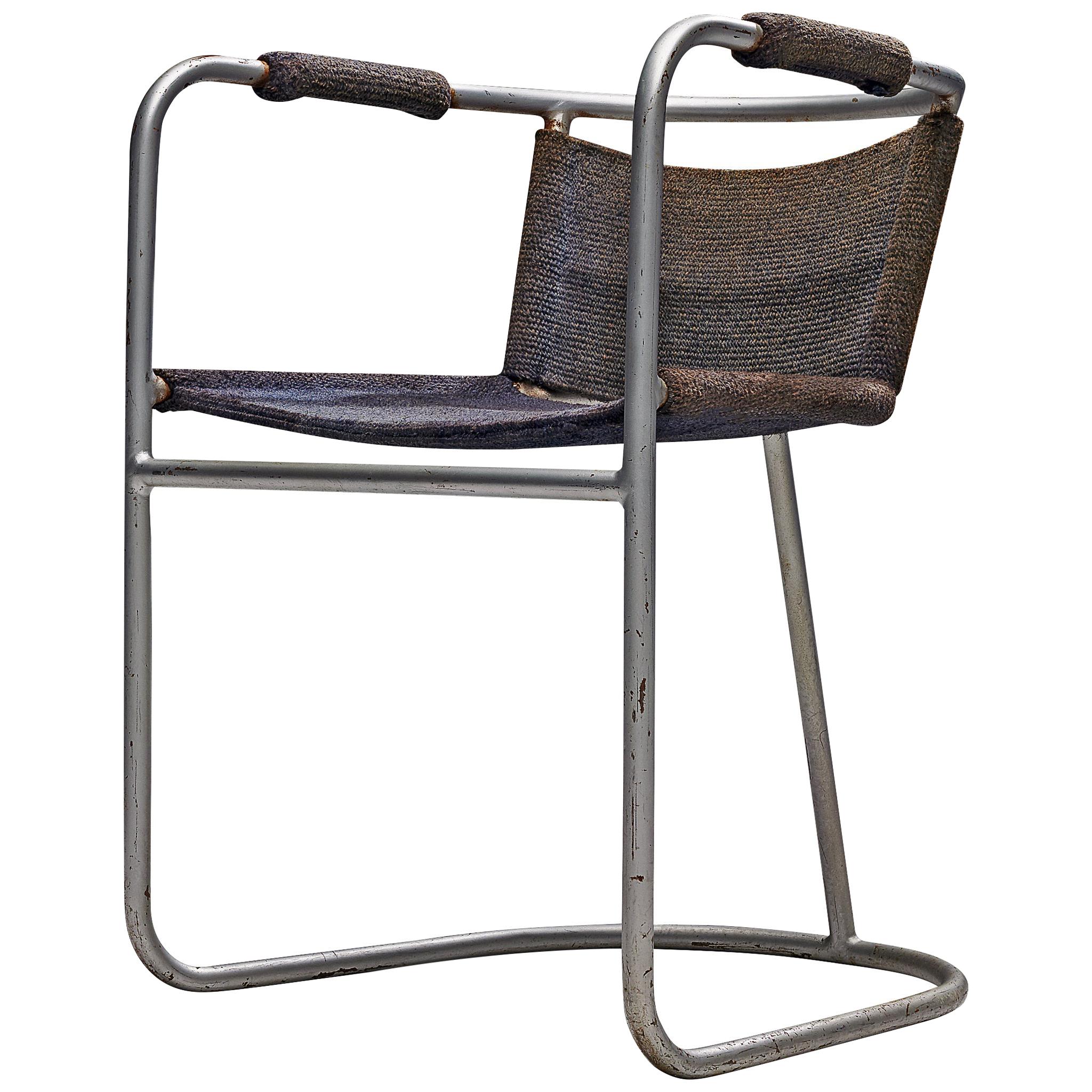 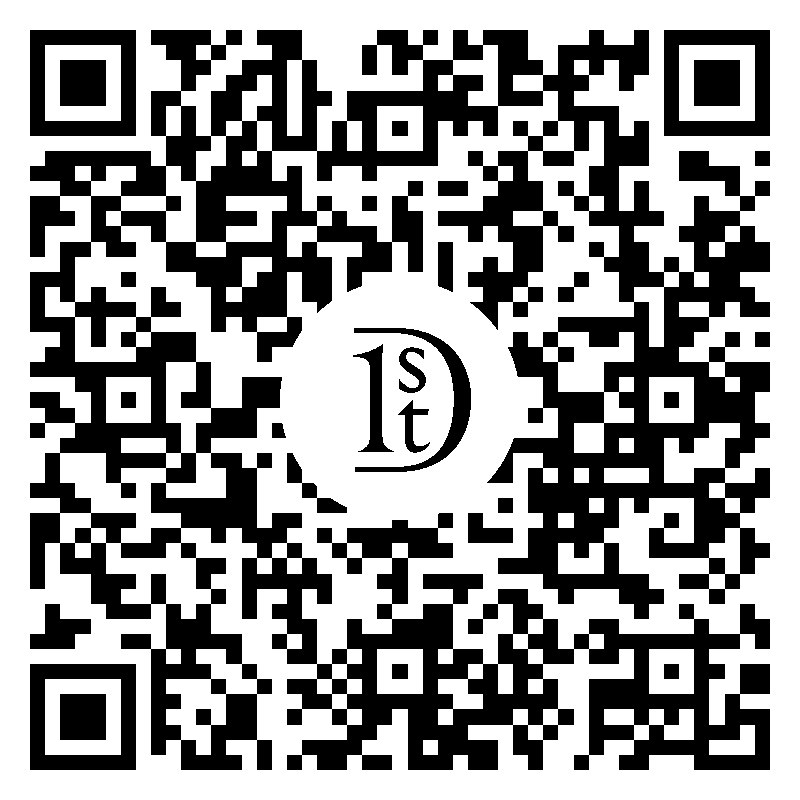 Bas van Pelt, armchair, metal, sisal, The Netherlands, 1930s. This original comfortable chair is designed by the Dutch interior and furniture designer Bas van Pelt (1900-1945) and was manufactured by E.M.S. Overschie. The construction of this particular chair is made of chromed tubular metal frames, giving it a sleek appearance. But then the seat and armrests have a warm appearance due to the coarsely woven fabric ‘sisal’. The design shows traits of the aesthetics by Bauhaus. The seat has discoloration and the metal shows signs of use, which contribute to the authentic look. Bastiaan Johannes van Pelt (1900-1945) was a Dutch furniture designer and interior designer. As son of a book printer, he spend his time after school working in several printing companies in Holland. At that time he already engaged in topics like designing furniture, interiors, carpets and fabrics, graphic work and pottery. In 1927, he quit his old job and started to work at a furniture factory owned by his father-in-law J.C. Jansen in Overschie. Together with his brother-in-law, Jan Jansen, they produced various designs for furniture which were manufactured in series. During the first half of the 1930s, Van Pelt created a number of designs for tubular steel furniture, which were manufactured by the company D3 and E.M.S. Overschie. During this period, his designs evoke a strong resemblance to the ethos of the iconic Bauhaus. Simplicity and functionality were the core values within this movement, and Van Pelt managed to create furniture according to them, by the application of tubular steel, simple geometric forms, and materials which facilitated mass production. After 1938, Van Pelt turned away from the functionalist mindset and began designing in the style of the ‘Delfste school’, which was more engaged in historical shapes and traditional manufacturing methods. Van Pelt always dreamed of having his own business and he did not hesitate when he got the opportunity to take over the store ‘My Home woninginrichting’ located on ‘De Lange Houtstraat’ in The Hague, in 1931. He transformed the store into a thriving company in the field of modern home furnishings. It functioned primarily as a show room where he exhibited a selected range of modern furniture and upholstery accessories. For instance, his collections consisted of specifically metal furniture and lamps by D3, E.M.S. Overschie, and Thonet in combination with his own designs. The success of the store resulted in opening three more showrooms in Maastricht (1934), Enschede (1936) and, Amsterdam (1938). His clientele consisted of the wealthy bourgeoisie and middle class, and in particular of lawyers and doctors. Diplomats who visited the royal city for a while, had the possibility to rent furniture from his store. Bas van Pelt decided to actively participate during World War II. His country house ‘De Pal’ in Emst served as a depot for ammunition and a hiding place between 1943 and 1945. Architect and industrial designer Willem Hendrik Gispen (1890-1981) arrived at Van Pelt’s place to hide from the Germans after he got released. From May 1944, he was imprisoned for a whole year in various concentration camps. On May 24, 1945, a few days after his liberation, Van Pelt died at the age of 44 in Stalag XB, a concentration camp near Hamburg. Van Pelt's successful design studio and interior store with various branches, has been taken over by his wife, and later their daughter.

Recognized Seller
These prestigious sellers are industry leaders and represent the highest echelon for item quality and design.
Diamond Seller
These expertly vetted sellers are 1stDibs' most experienced sellers and are rated highest by our customers.
Established in 2006
1stDibs seller since 2012
4,165 sales on 1stDibs
Typical response time: 1 hour
Associations
20th Century Specialists
More From This Seller

$4,107
Dutch Mid-Century Armchair by Bas Van Pelt 'Attr.', the Netherlands 1940s
By Bas Van Pelt
Located in Utrecht, NL
This organic armchair attributed to Dutch designer, Bas Van Pelt is an elegant model with an exceptionally high level of craftsmanship. The construction of this rare 1940s design is ...
Category

$4,400
Tubular Metal and Faux Leather Armchair, France, circa 1950s
Located in Isle Sur La Sorgue, Vaucluse
Wide and comfortable easy chair. The structure is made of tubular metal with a glossy black finish, and the seat and back are upholstered in original red leatherette. The height of t...
Category