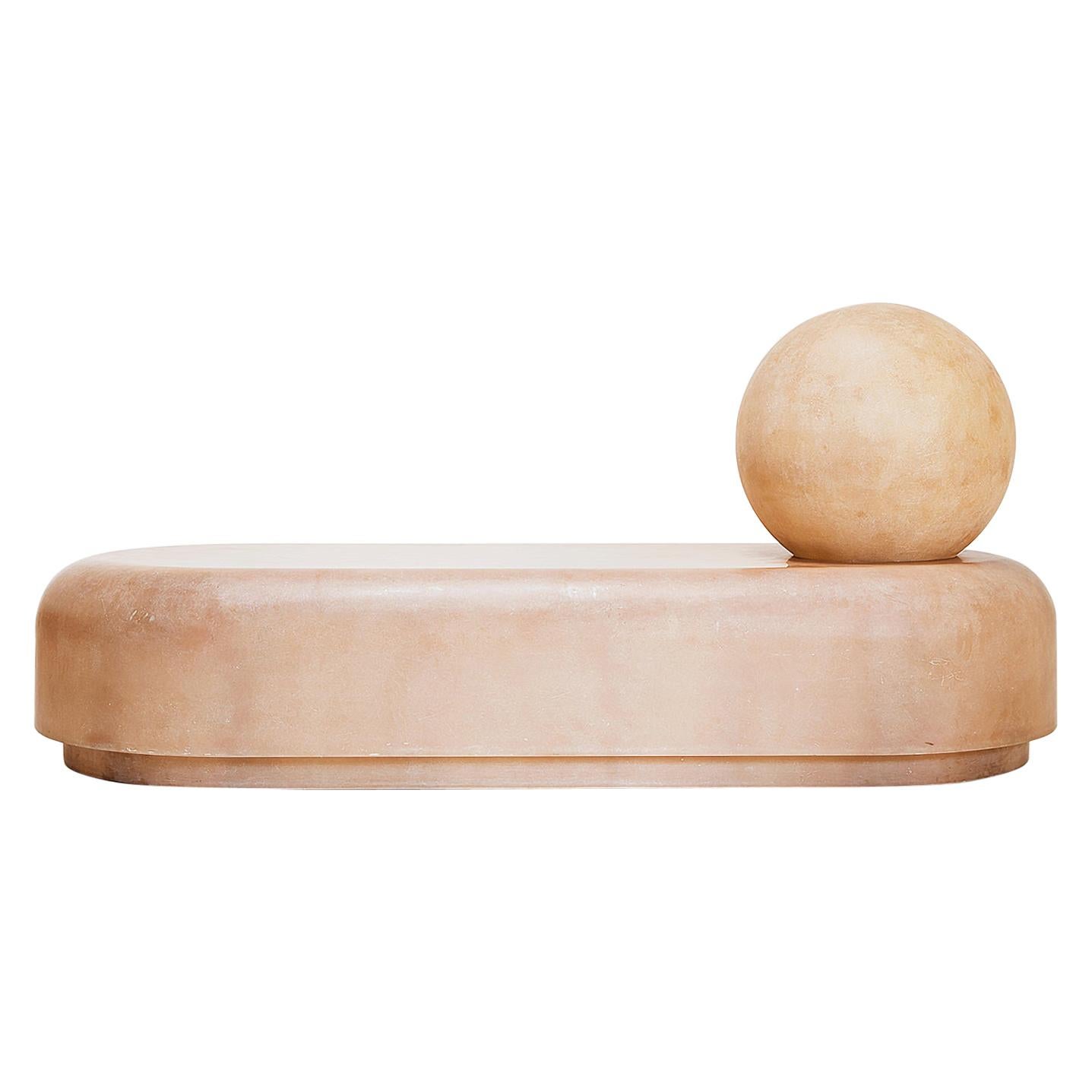 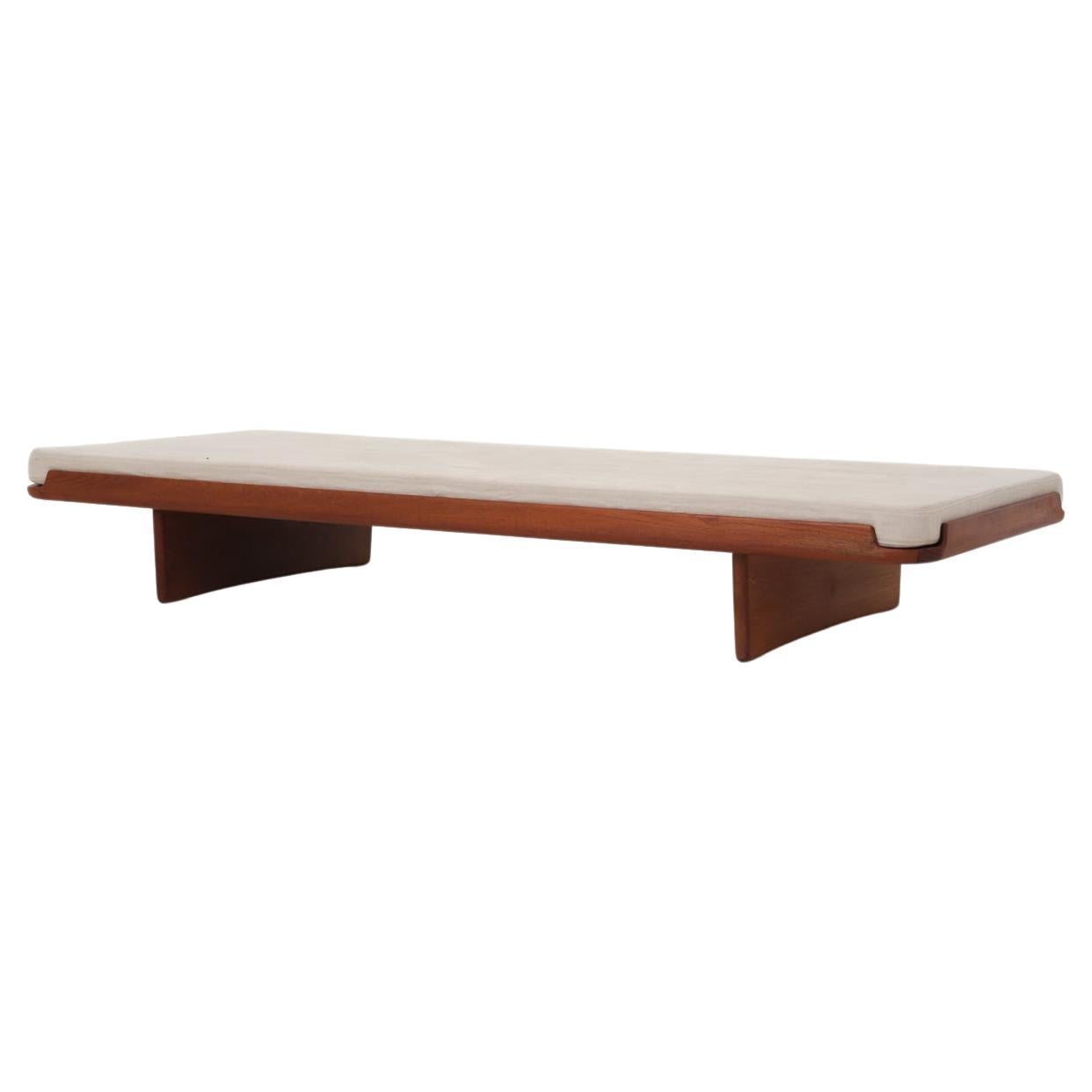 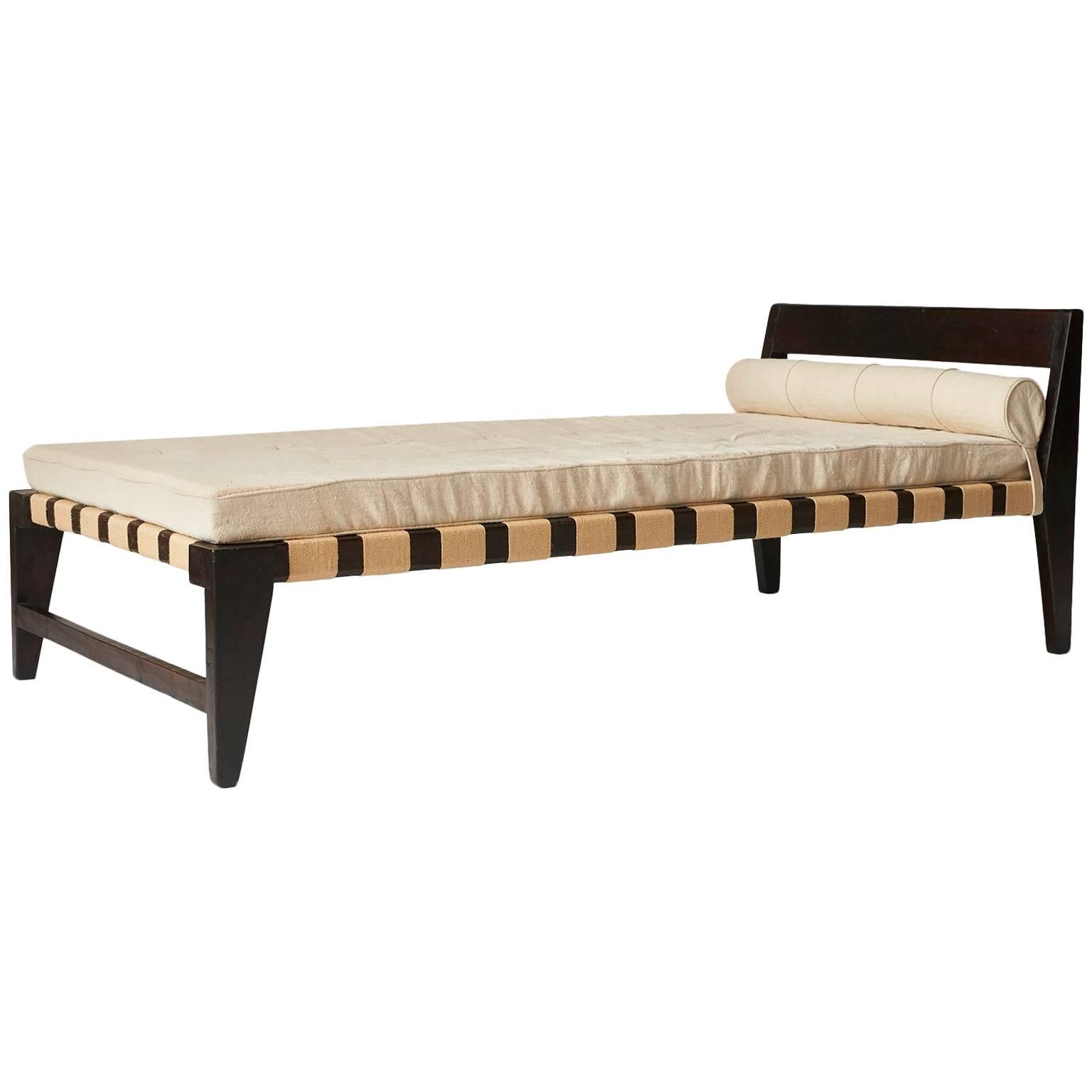 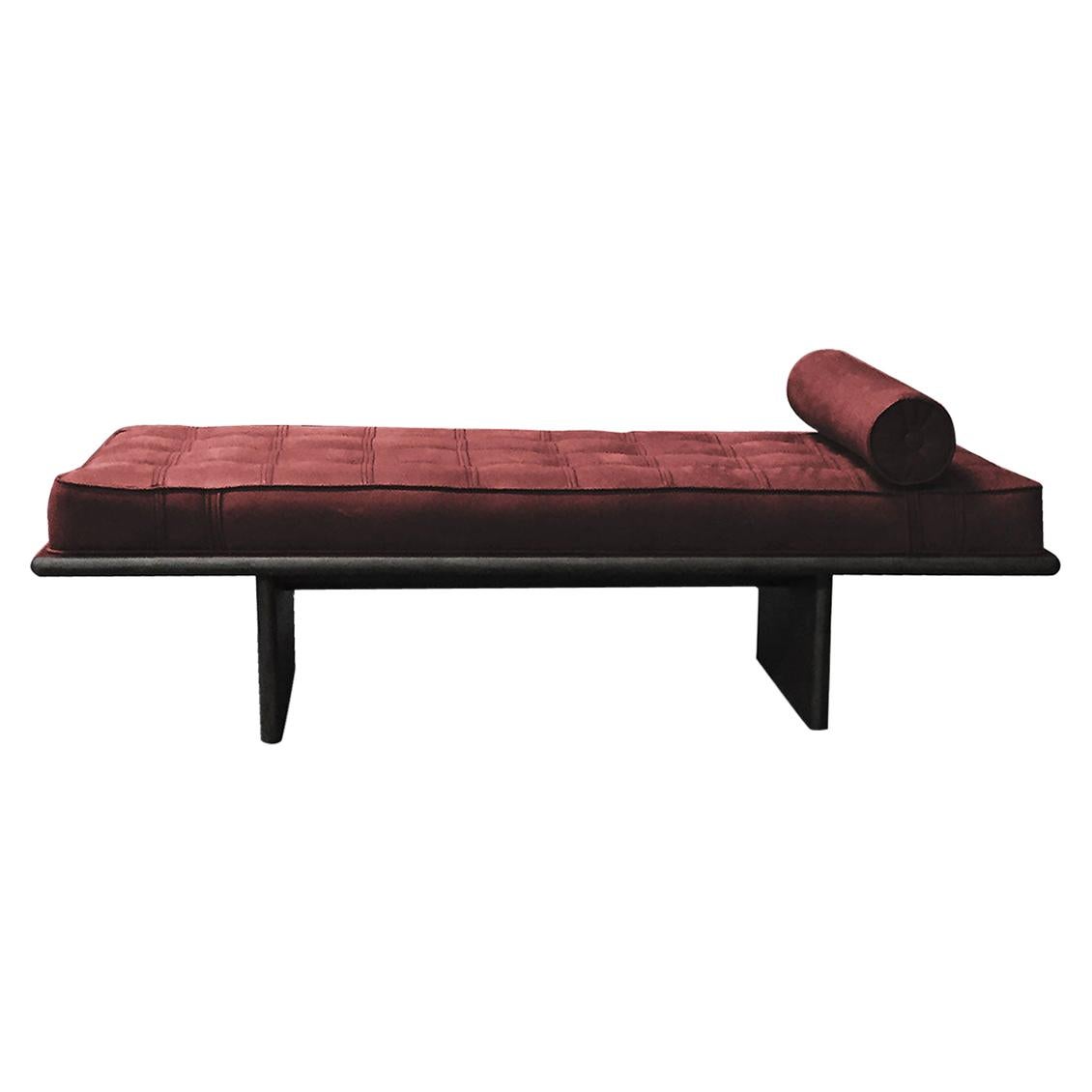 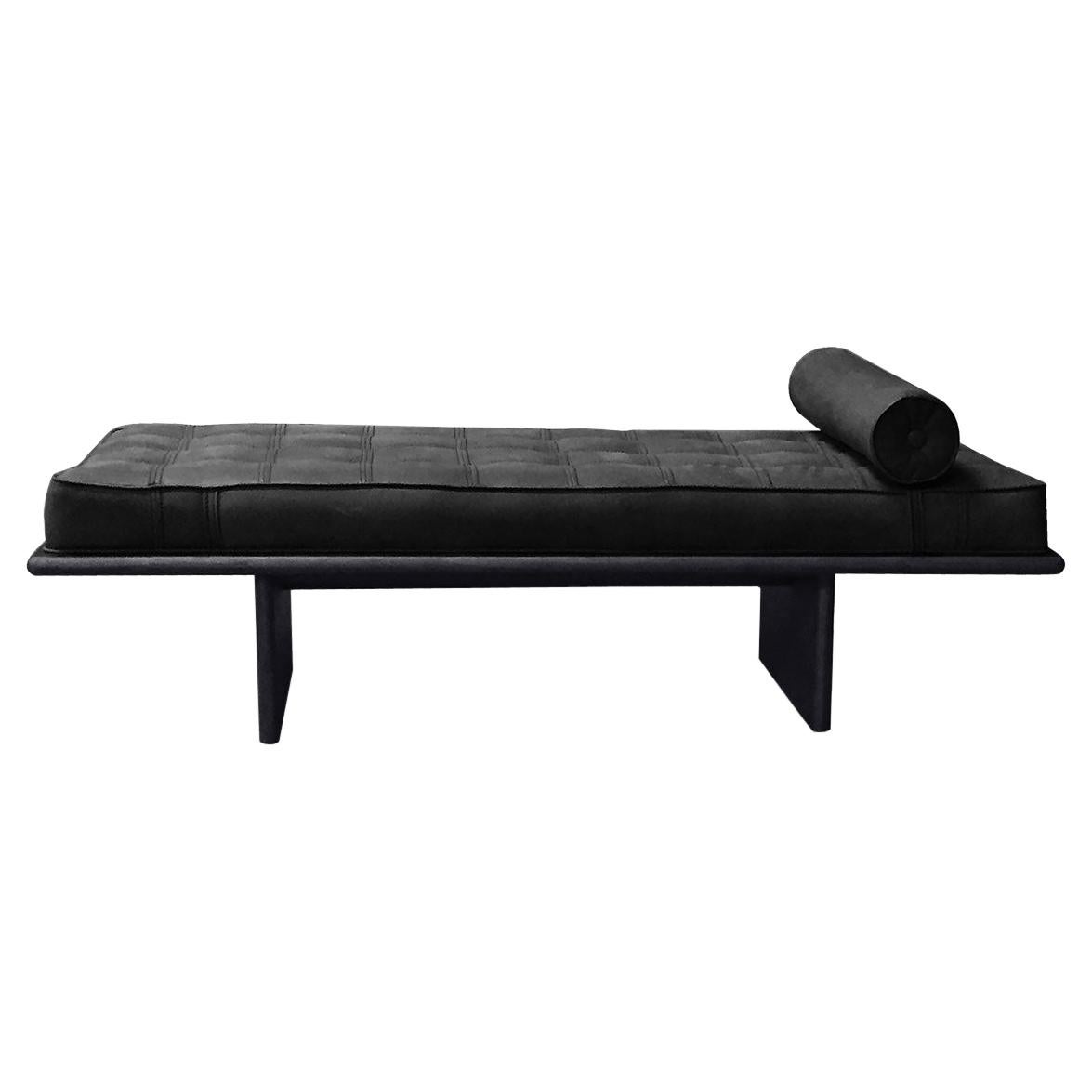 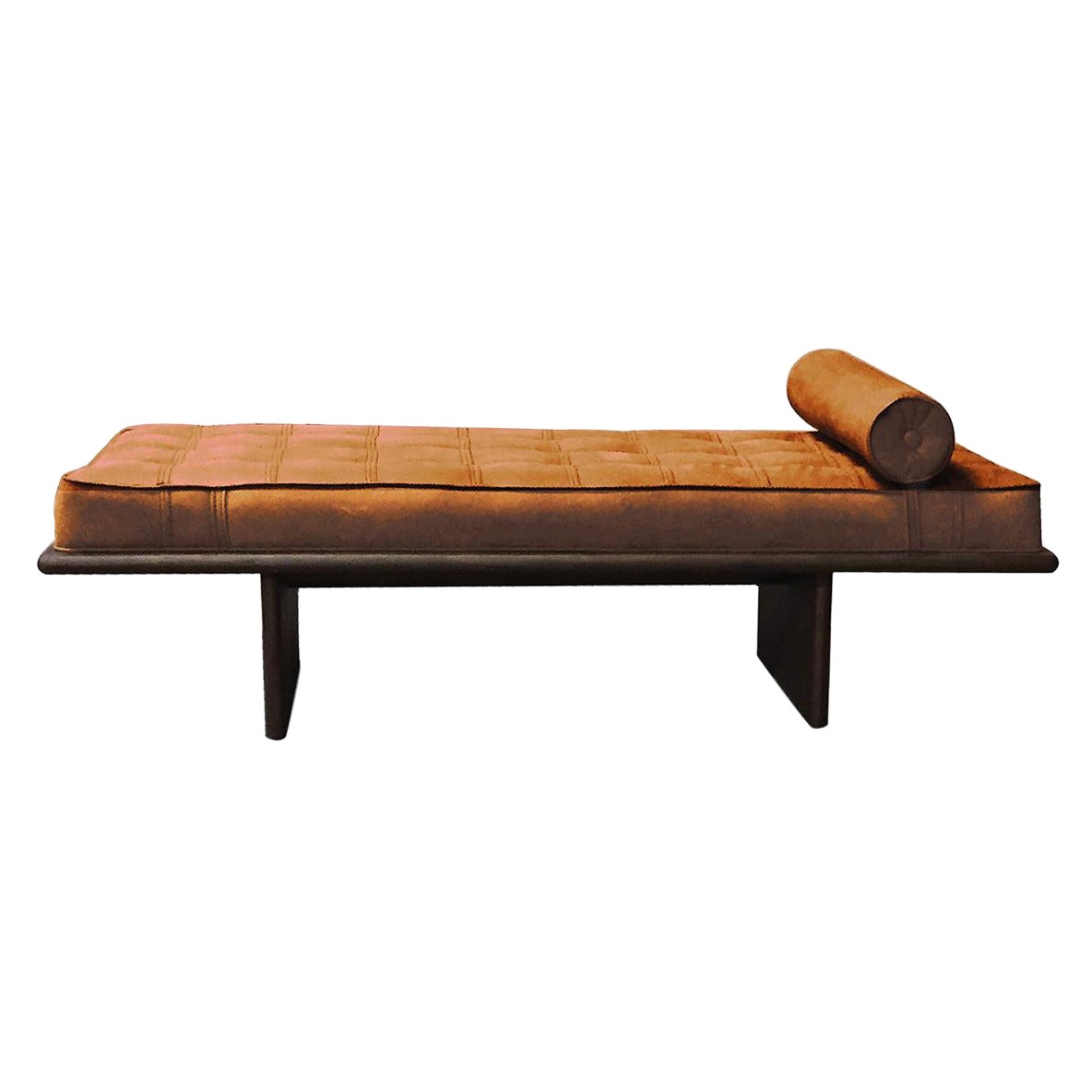 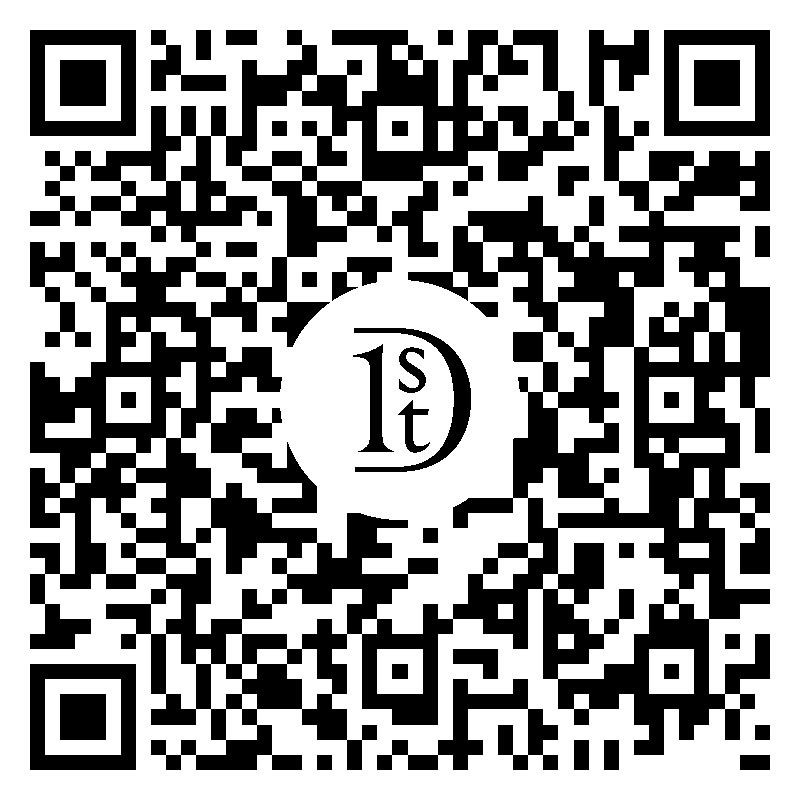 A daring and original piece of furniture designed by British artist Jonathan Yeo, structurally engineered by expert technicians and manufactured by LINLEY, the world-renowned wood-specialist and craftsman. Re-imagining the classical conversation piece for the 21st century, the Yeo daybed blends traditional and contemporary luxury together transcending architecture, design and art. The rich veneers of wood were hand-selected for their prominent horizontal lines whilst the elegance and dynamic silhouette is accentuated by subtle brass edging. 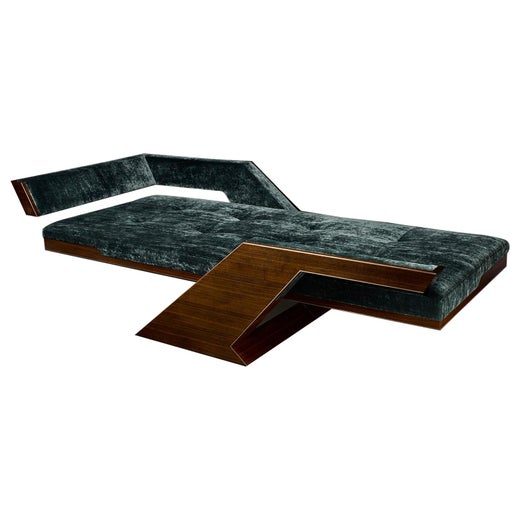 Consider it the ultimate royal seal of approval: When the young LINLEY founder, David Linley (b. 1961), made a decorative box as a teenager — a project he’d crafted at Bedales School that impressed his teacher — it was proudly passed around as a cigar box at parties by the Queen Mother. Of course, the royal treatment makes a bit more sense when you consider that the Queen was simply grandmother to Linley, formally David Albert Charles Armstrong-Jones, second earl of Snowdon, son of Princess Margaret and photographer Antony Armstrong-Jones.

Born in London, Linley was creative from an early age — a characteristic eagerly encouraged at home with his parents and at Kensington Palace with the extended family. After completing his studies in carpentry and design at Parnham House in 1982, Linley set up his first studio. Within three years he had moved to King’s Road in Chelsea and, with his friend painter and designer Matthew Rice, officially cofounded LINLEY, a source for luxury furniture and accessories and bespoke carpentry and millwork.

The brand was a quick success. When Linley presented its first line at Christie’s in 1985 — a collection of furniture and more called “Venetian,” which was inspired by the Italian city’s grandiose Gothic architecture — the entire lot sold out on the day of its presentation. Besides Linley the brand being a commercial success, Linley the founder was somewhat of a marvel: At the time, the designer was the first of the royal family to undertake any sort of vocational work, let alone establish their own brand.

LINLEY has become known over the years for its fine craftsmanship, detailed marquetry and inlay and use of rare and exquisite woods. Its case pieces, seating, other furnishings and decorative objects owe consistently to traditional methods and conventions as often as they do clean modernity. The designer has long looked to Chippendale furniture as well as other styles that gained prominence during the 18th century as much as he has toward the future.

Now, in addition to its furniture, accessories and custom millwork, LINLEY operates an interior design business, outfitting homes (and a few cars and yachts) in the brand’s singularly chic style. And while its output is marked by style, craftsmanship still comes first: “I’m a maker, not a designer,” the earl once proclaimed.

Find a collection of LINLEY furniture on 1stDibs.

At LINLEY we are inspired by transforming an ethereal idea into a reality and we are fortunate enough to work with master craftsmen who turn the impossible into the possible. Everything we create at LINLEY is recognisable by those quintessentially British characteristics of inventiveness, meticulous attention to detail, creativity, elegance, wit and charm. We have always championed British craftsmanship and encourage others to do the same in order to keep these important skills alive for future generations to learn and benefit from. We are very proud of our artistry, both in terms of concept and implementation and it is our hope that the passion that drives the creative process is evident in everything we do.
Shop All Linley

1stDibs Buyer Protection Guaranteed
If your item arrives not as described, we’ll work with you and the seller to make it right. Learn More
About the Seller
No Reviews Yet
Located in London, United Kingdom
Recognized Seller
These prestigious sellers are industry leaders and represent the highest echelon for item quality and design.
Established in 1985
1stDibs seller since 2015
11 sales on 1stDibs
Typical response time: 14 hours
More From This SellerView All
People Also Browsed
You May Also Like