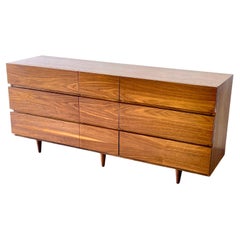 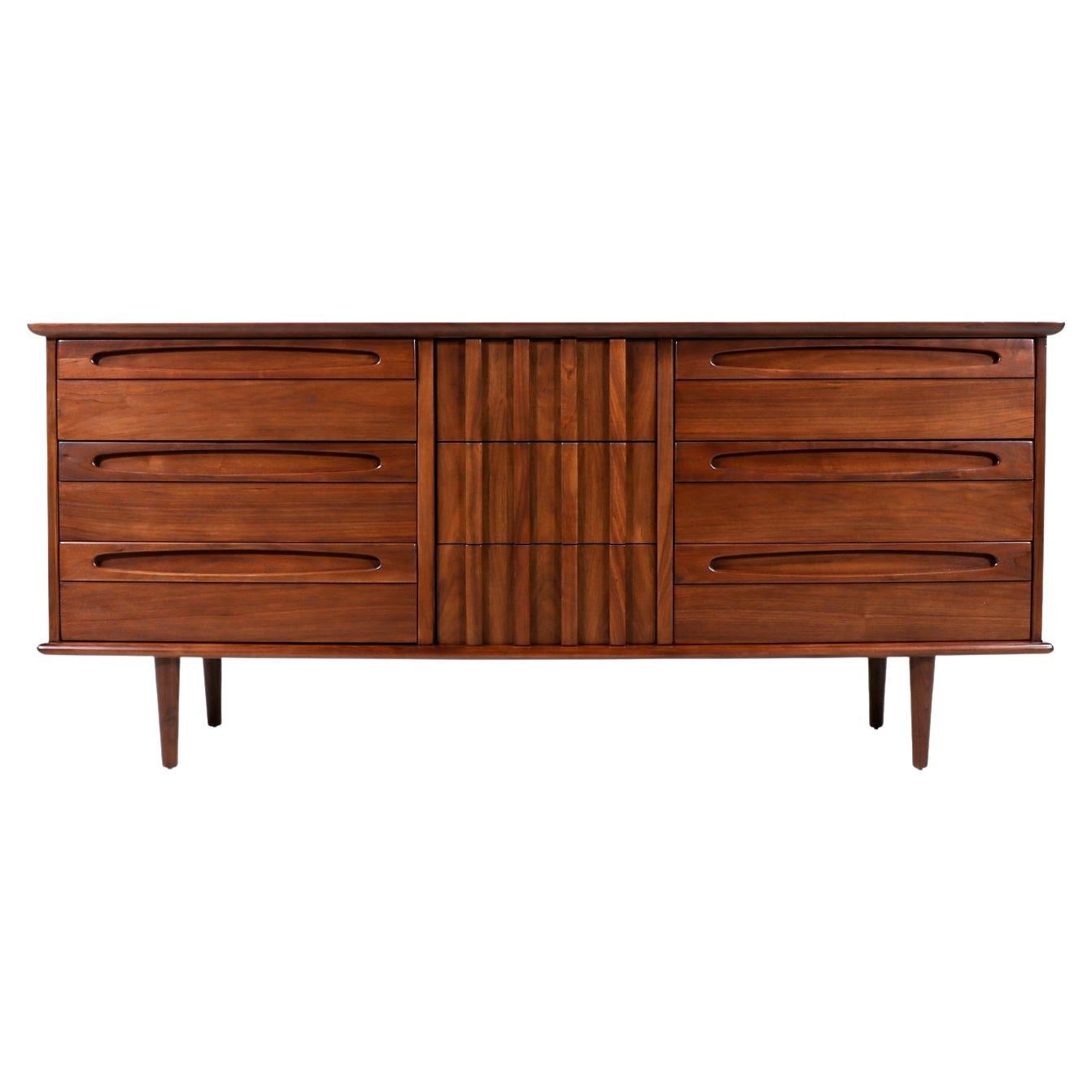 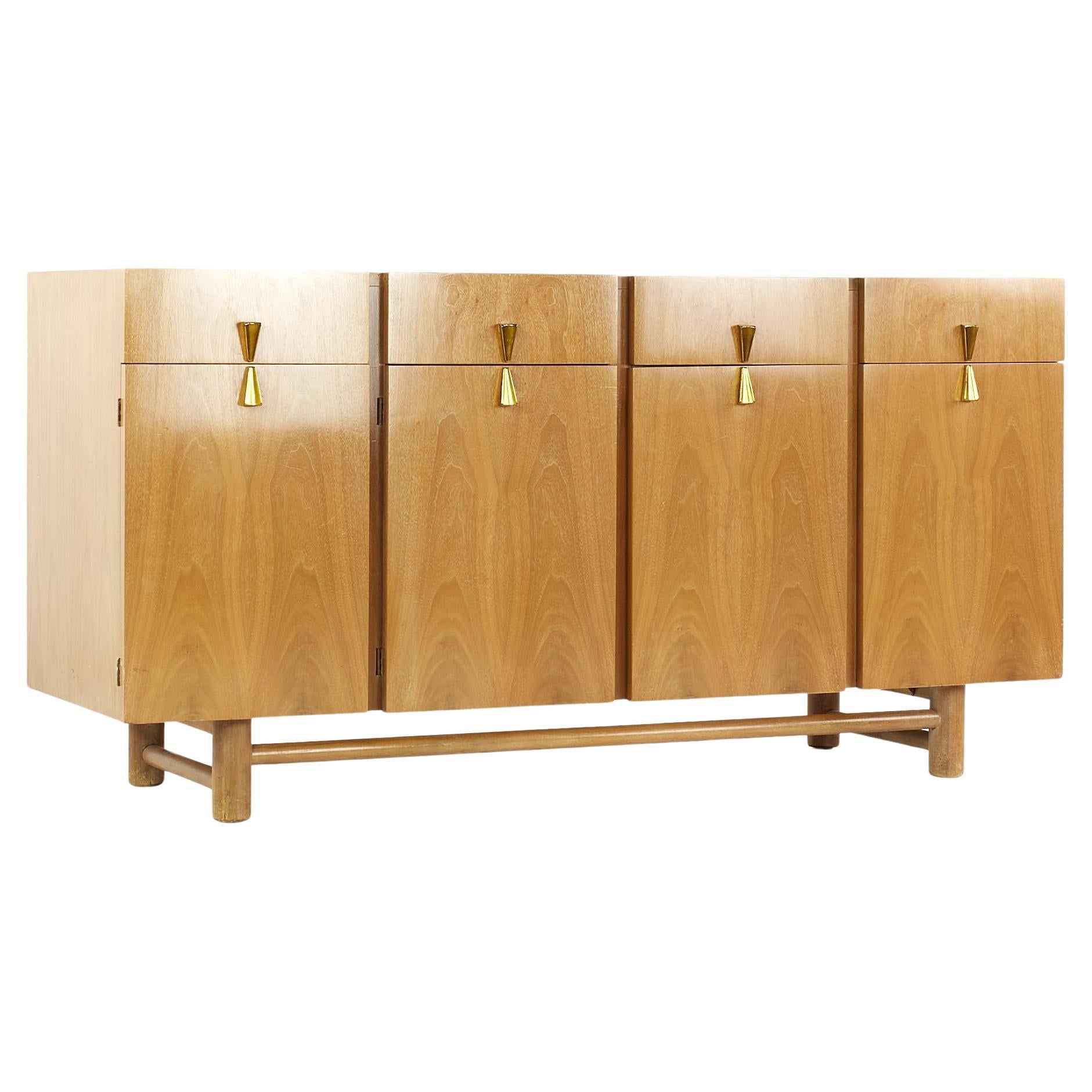 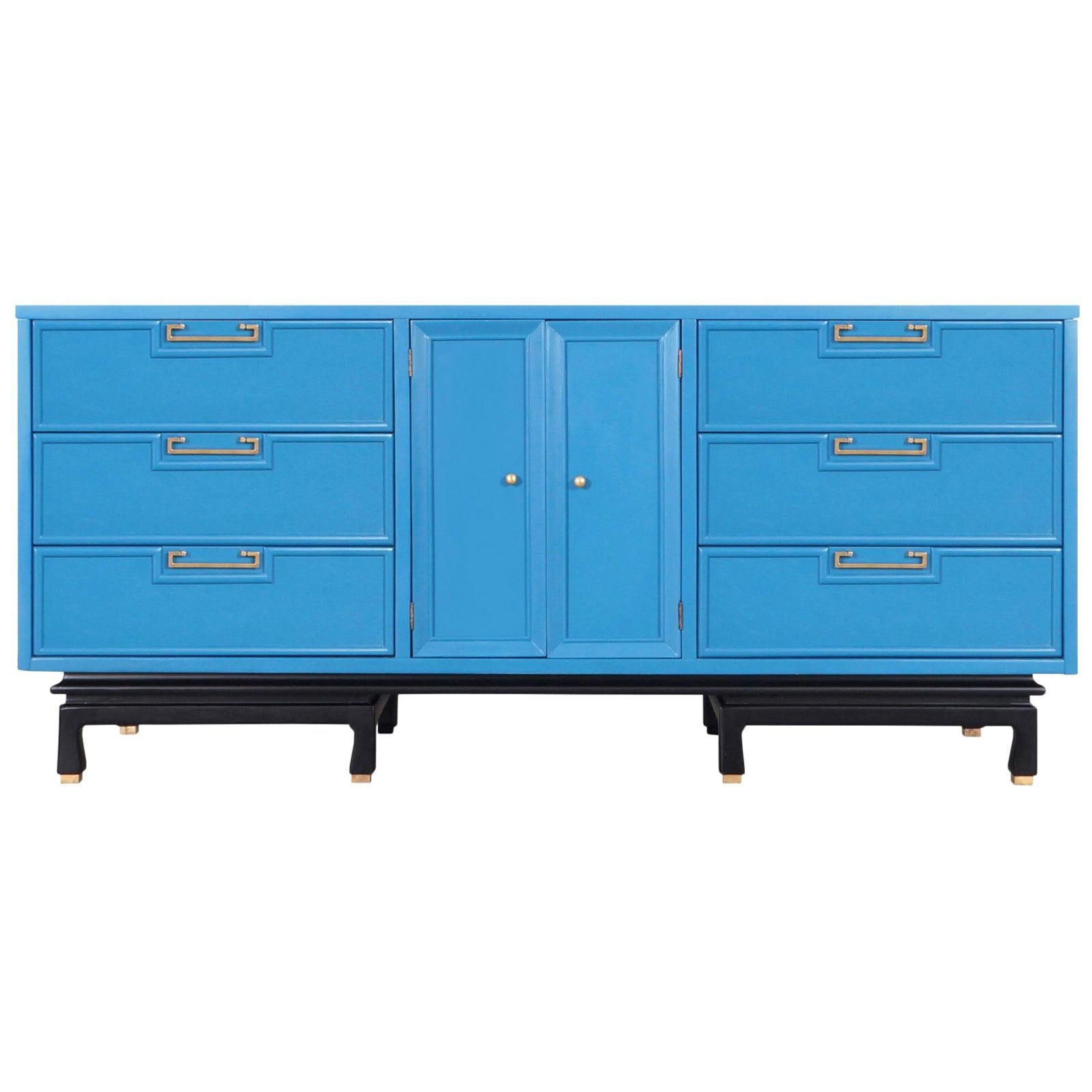 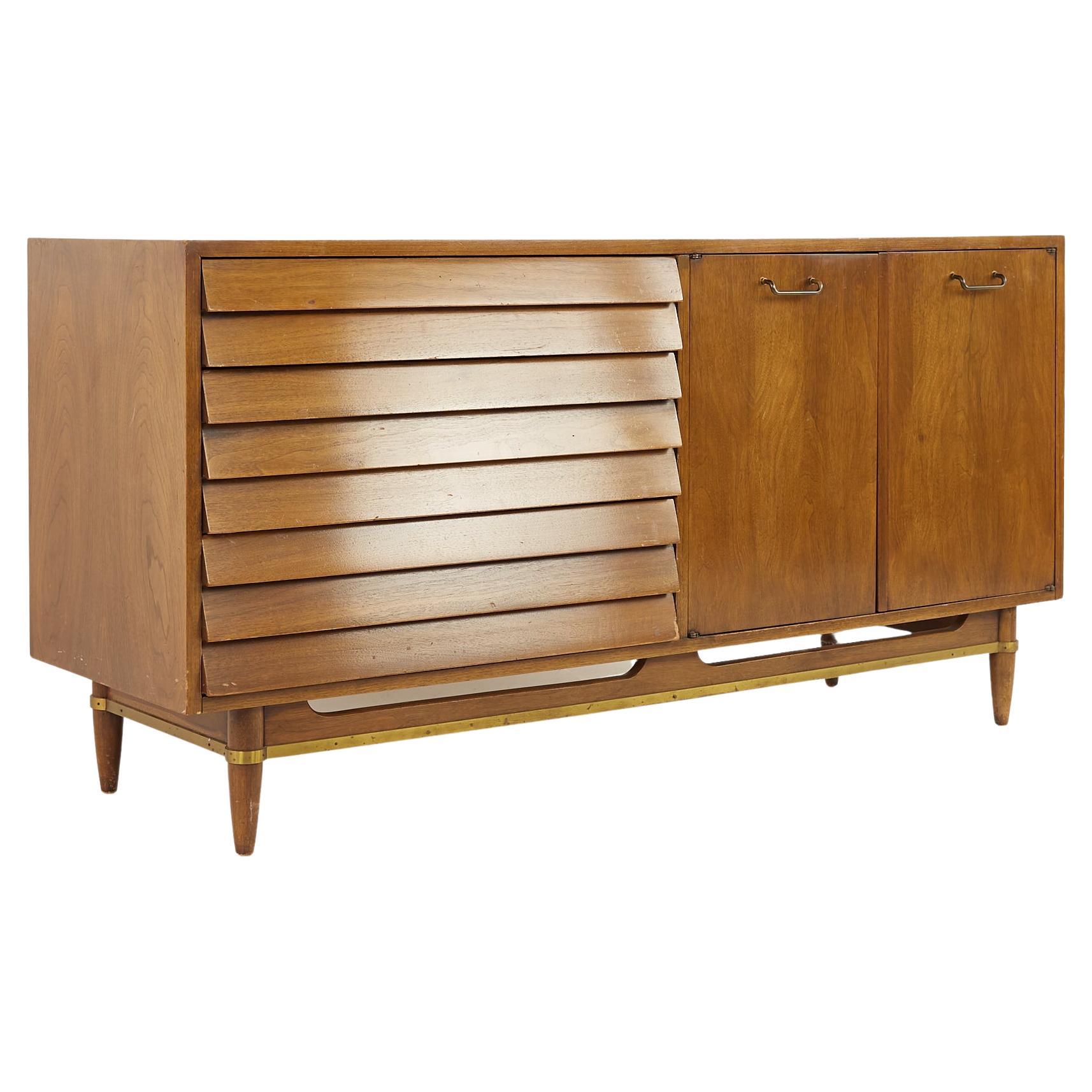 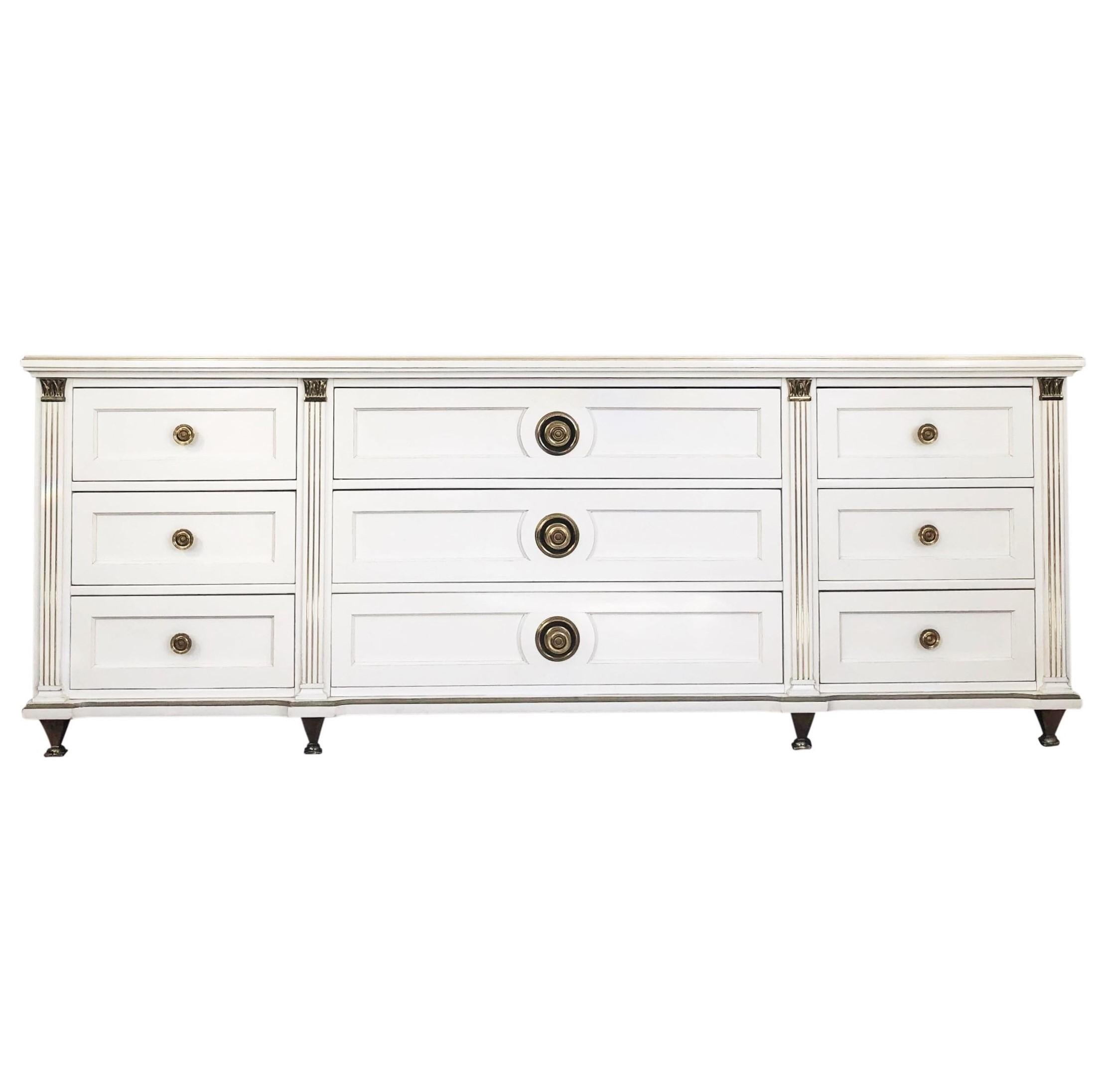 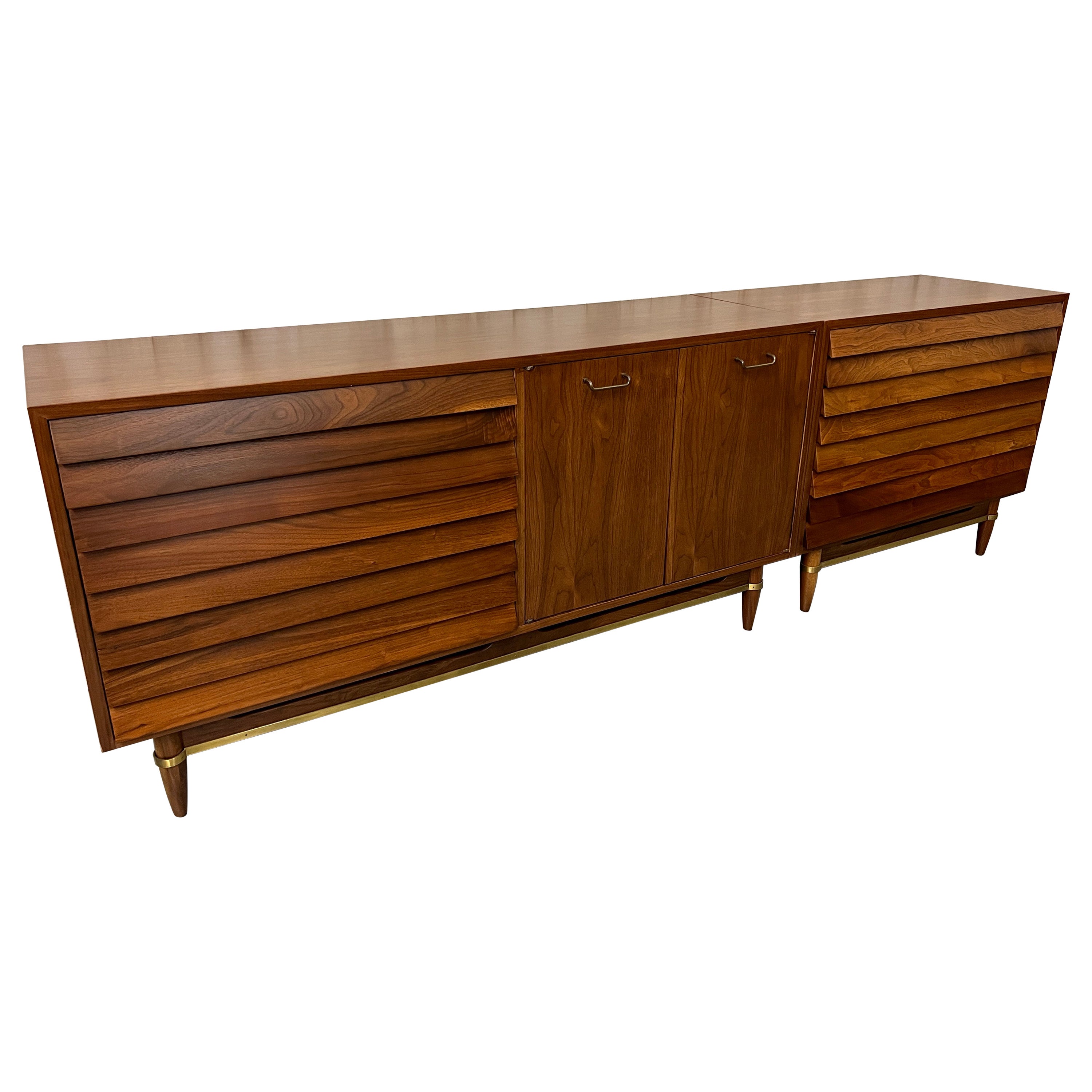 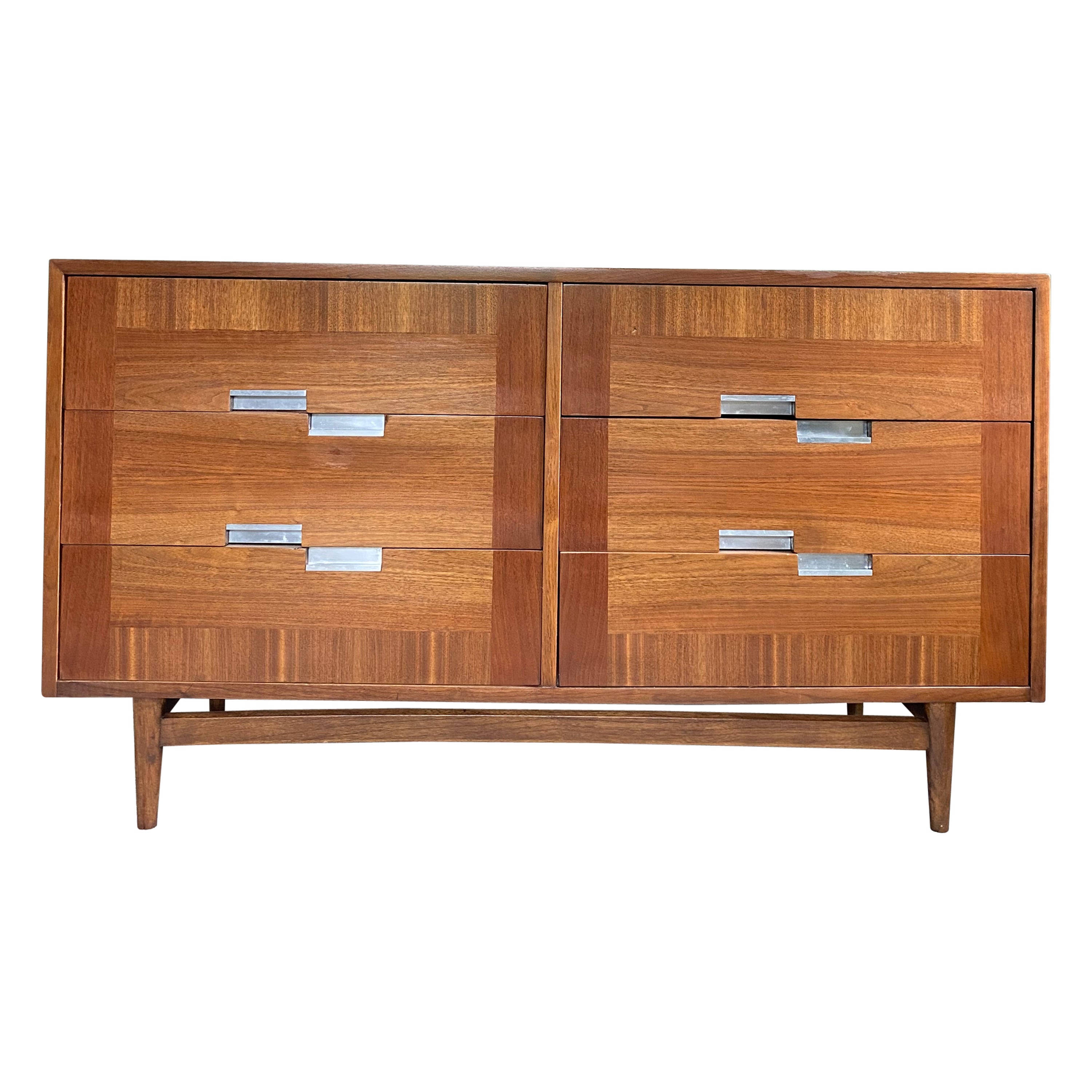 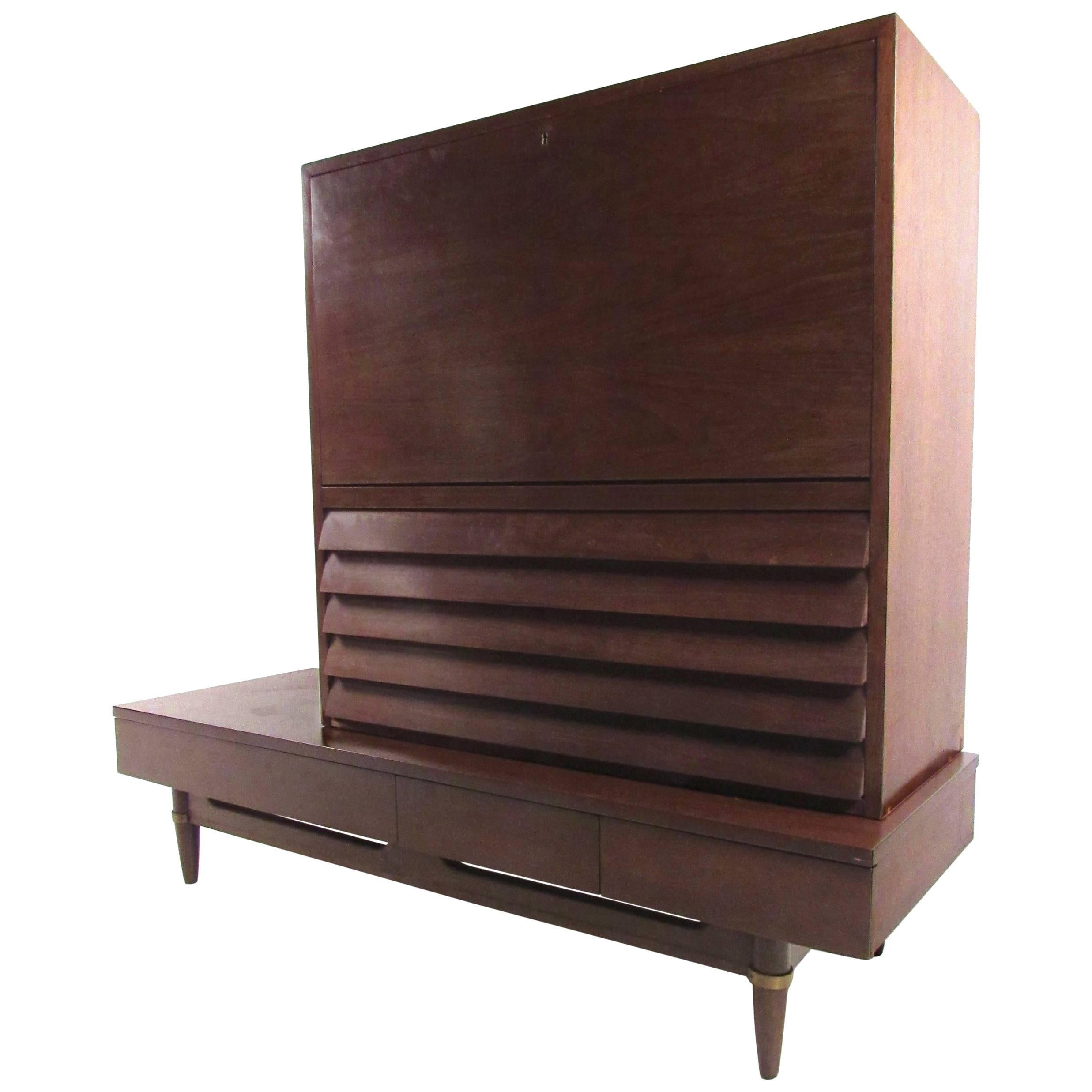 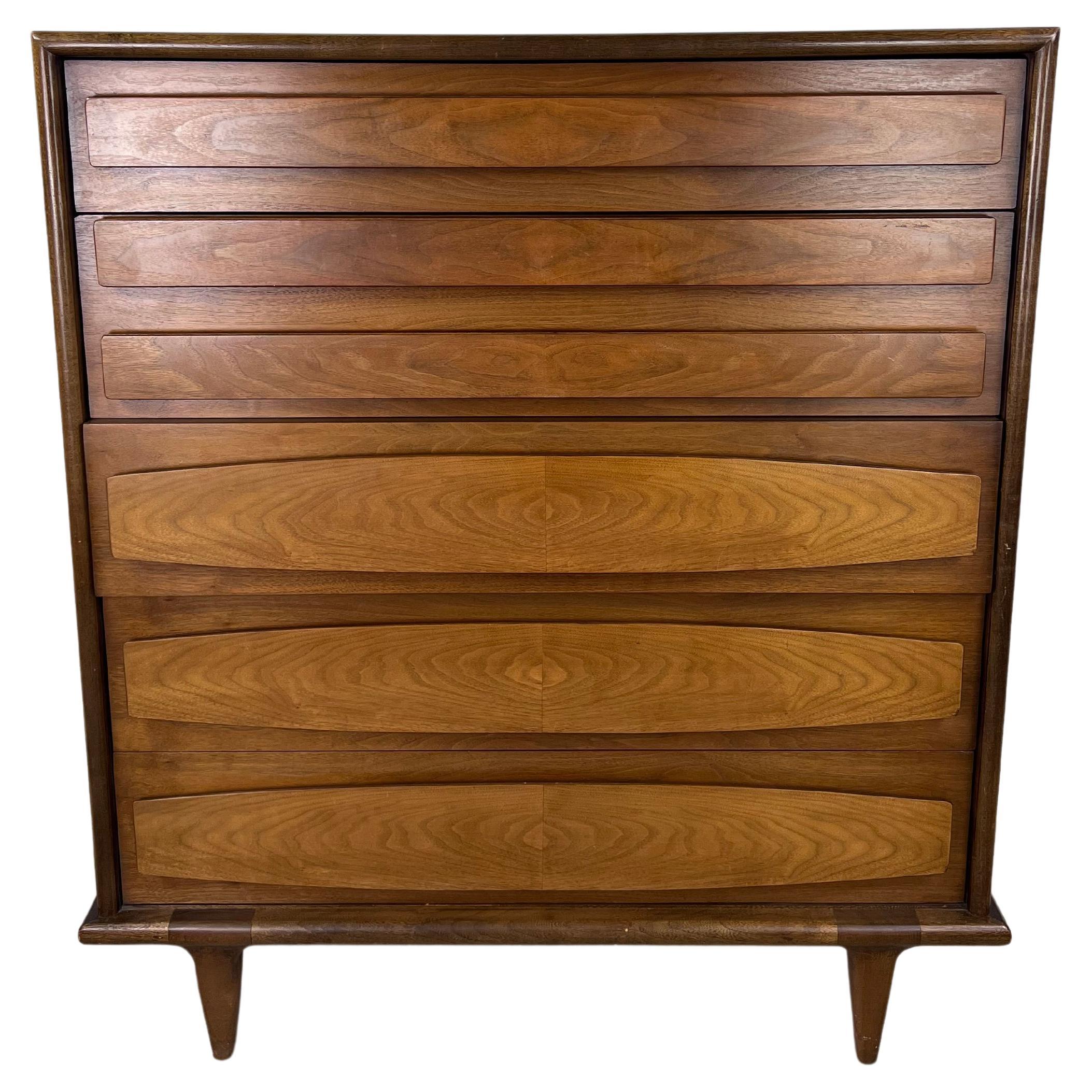 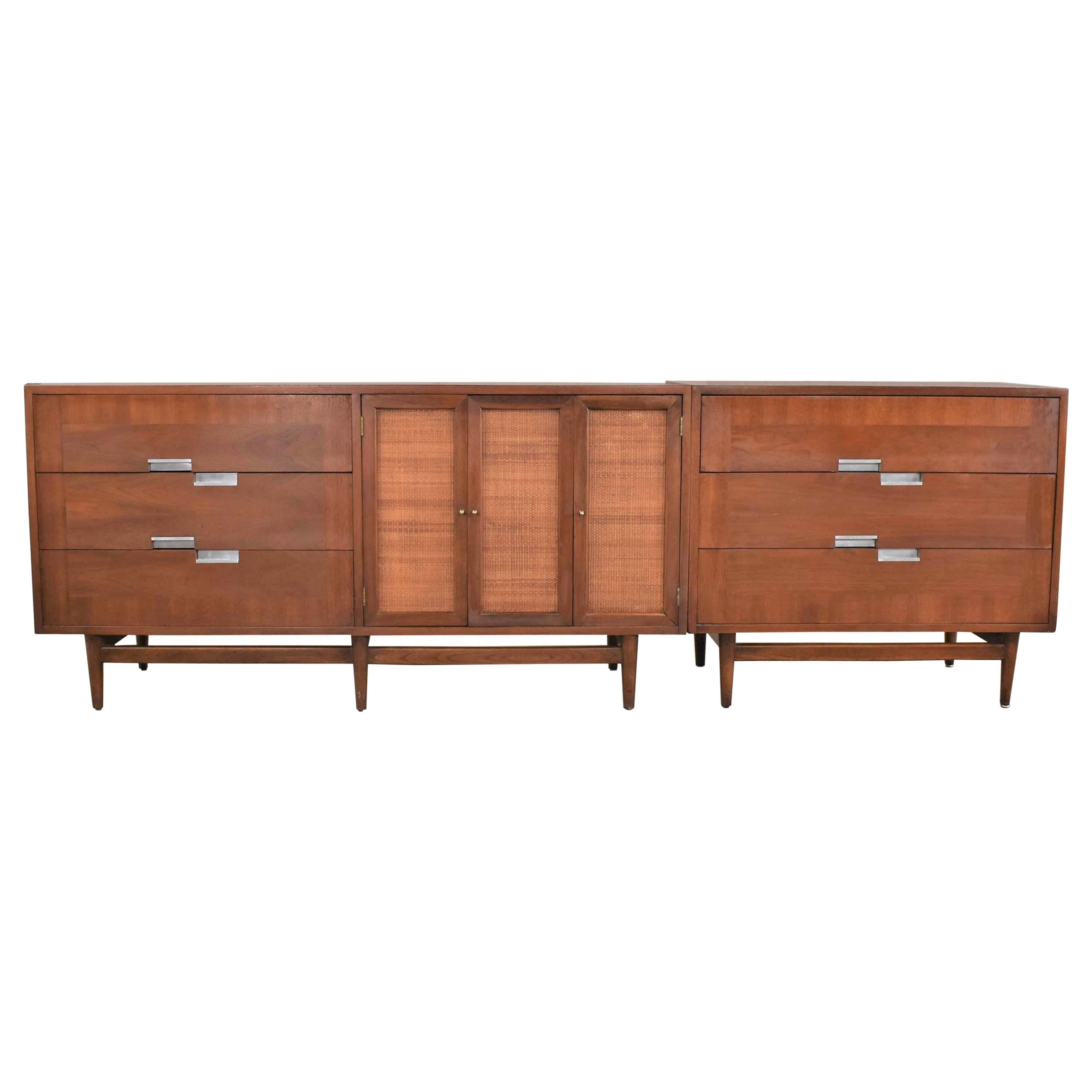 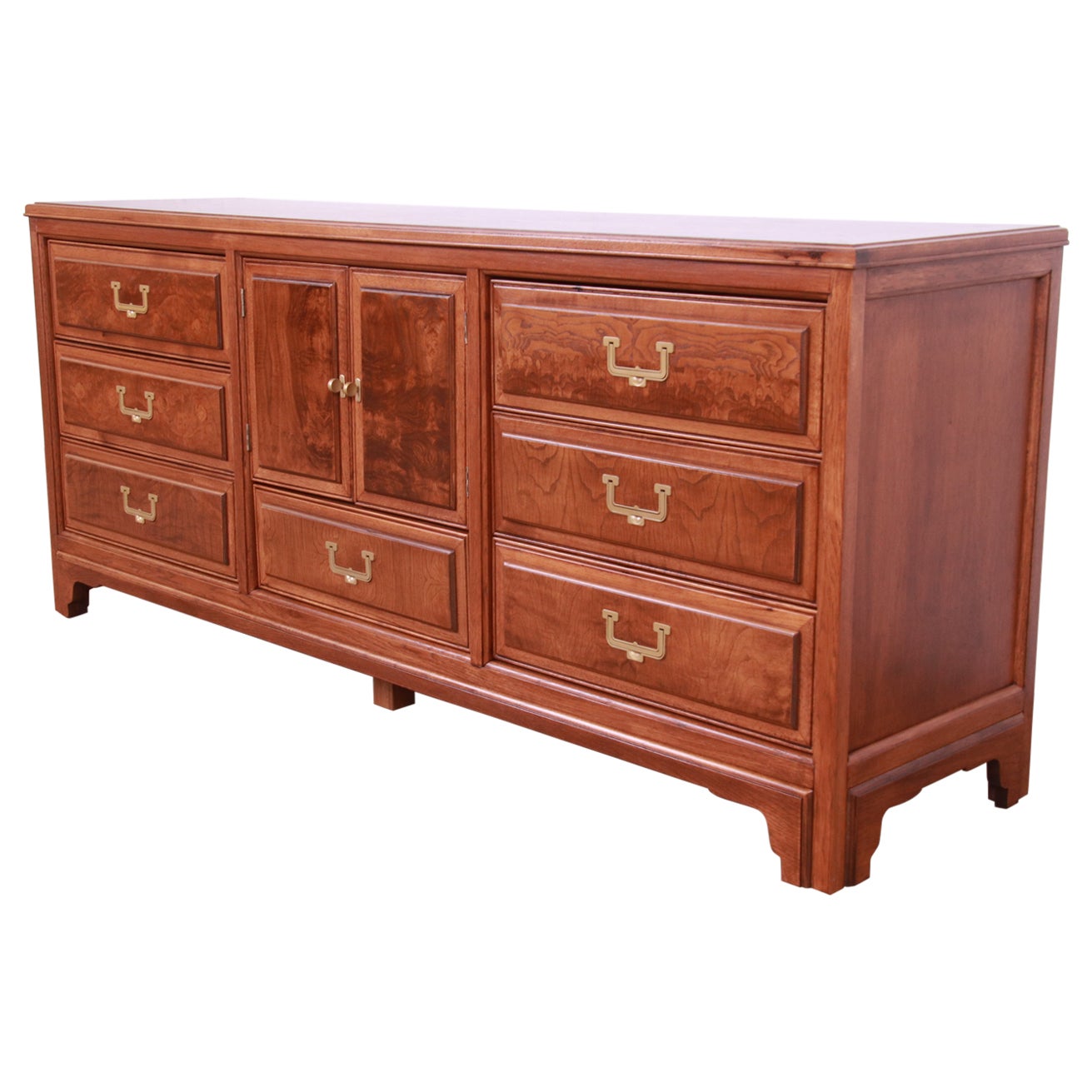 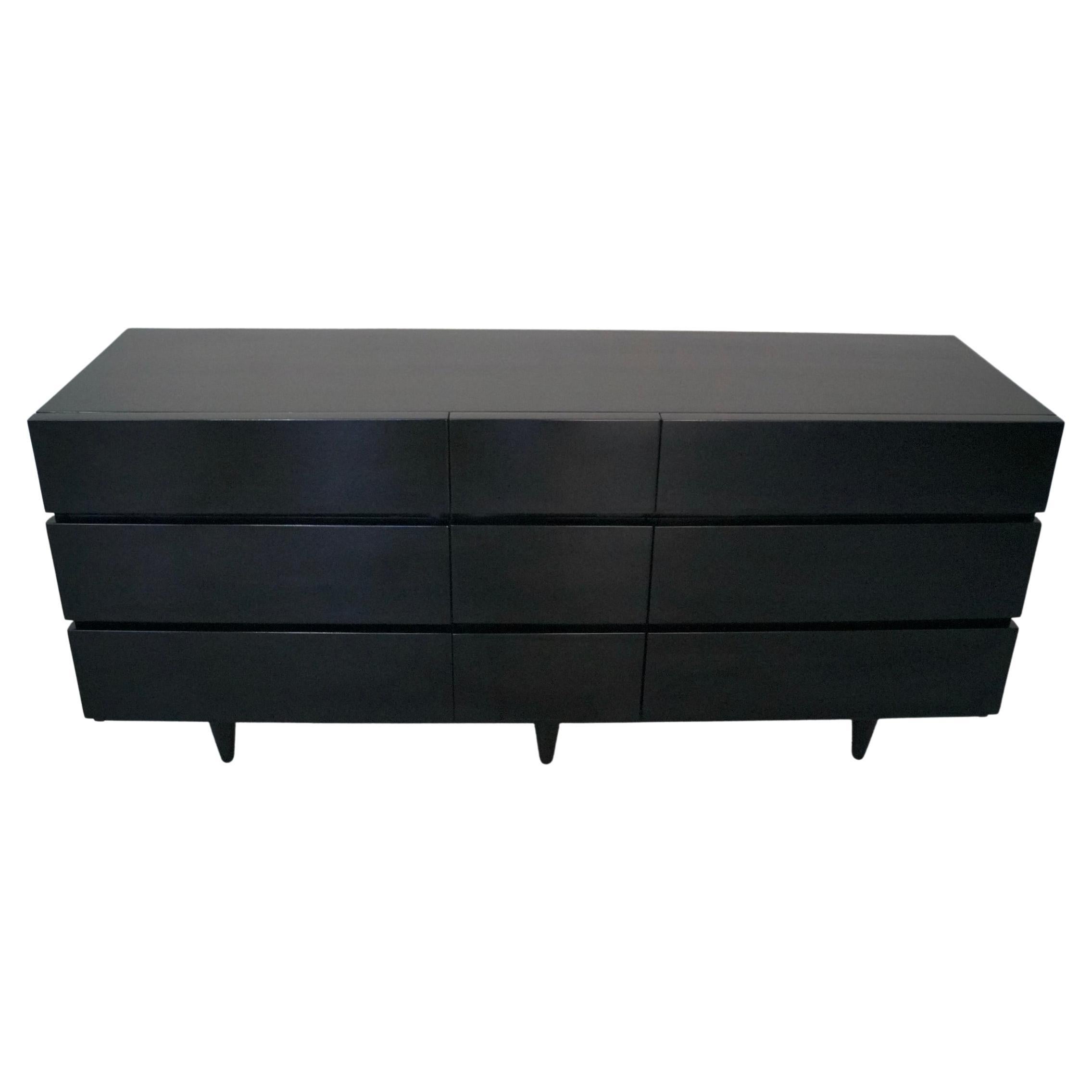 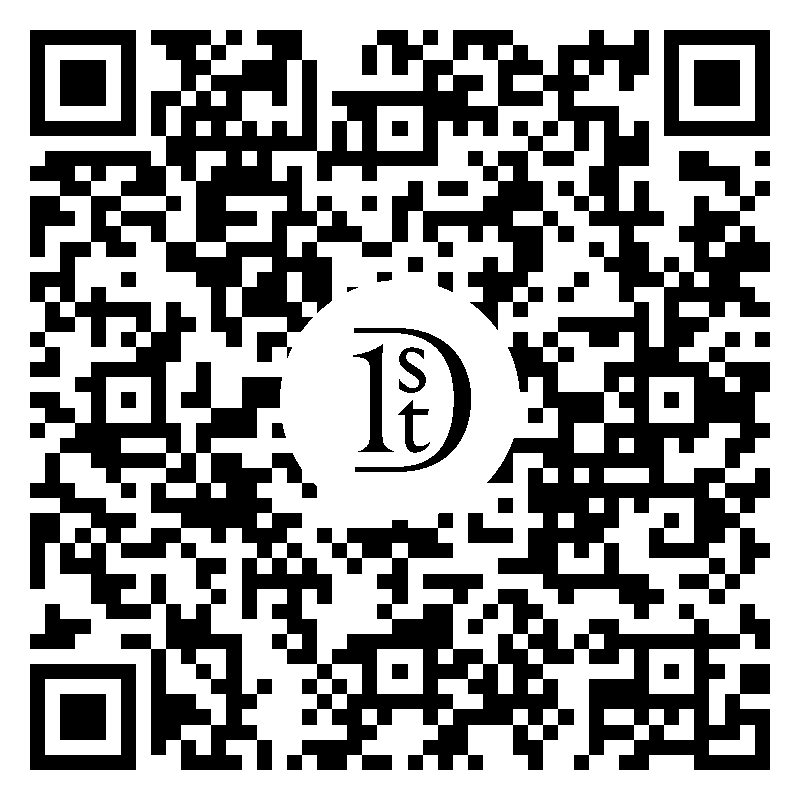 Handsome Mid-Century Modern American of Martinsville long triple dresser. Tons of storage with nine spacious drawers. Danish styling with the superior, 1960s era American craftsmanship. The drawers feature sleek, hardware free facades.The smooth, streamlined edifice of this set has the strength of materials and quality construction of retro furniture with a styling that translates well to today’s aesthetic. Measures: 70 in wide 19.5 in deep 31 in high Professionally refinished and restored. 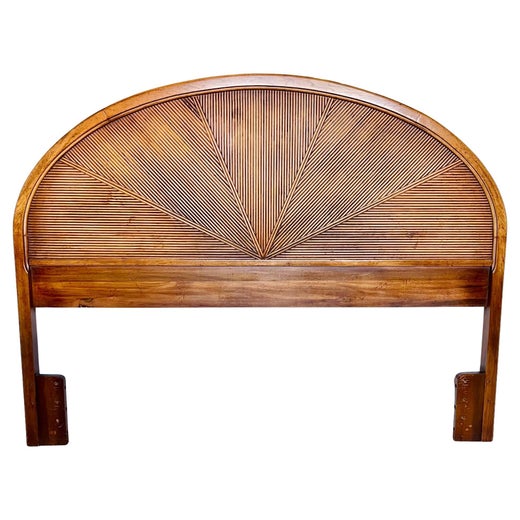 Well ahead of the Civil War, tobacco was a cash crop in places such as Virginia, and the plant was grown with frequency on farms in Martinsville and elsewhere. In the early 1900s, the business around tobacco was changing and the R.J. Reynolds Tobacco Company was expanding nationally, buying any Virginia factories in reach. Former tobacco producers Ancil Witten and Charles Keesee turned away from the business in 1906 and, with merely $30,000 in capital (and the support of local business leaders), began to manufacture bedroom furniture under the name American Furniture Company.

In the 1920s, American Furniture Company expanded its offerings from bedroom furnishings. Alongside tallboy dressers and nightstands, Witten and Keesee’s outfit began to offer a range of dining-room sets to the discerning customer. By the 1950s, the name had been changed to American of Martinsville and the brand had gained a reputation for exquisite craftsmanship as well as its variety of furniture styles (Hollywood Regency, chinoiserie). Mass-marketed furniture meant big business in the postwar years and throughout the 20th century in Virginia, and factories owned by companies like Bassett Furniture and American of Martinsville remained busy as suburbanites bought furniture to fill the homes they were moving into.

It isn’t difficult to spot American of Martinsville’s sturdy, solid designs — the lacquered walnut nightstands, mahogany coffee tables and more have long earned the admiration of mid-century modernism enthusiasts. The company’s high profile also owes to prominent attributes that distinguish its well-made vintage furniture, such as the use of wooden slats — inspired by Scandinavian modernism — on hutches and cabinet doors, the famous brass x’s inlaid on the tops of tables and dressers and the stately stacked type of the American of Martinsville logo, which usually appears in drawer interiors. The stamp prominently features an eagle perched atop the lettering, its broad wings spread across the “American” portion.

Besides quality manufacturing, American of Martinsville is additionally recognized for having incorporated the trends of the day. Inspired by designers like George Nakashima and Paul Laszlo, the brand was also known for innovations with wood. Merton Gershun was one of the company’s most prolific designers, and he was responsible for some of its most successful modern furniture lines using the richer, darker woods that would become emblematic of mid-century furniture. Gershun’s most popular line was reportedly Dania, with its sleek walnut credenzas fitted with stylish brass accents and large drawers. Today, American of Martinsville specializes in furniture for the healthcare and hospitality industries.

Shop a wide selection of vintage American of Martinsville mid-century modern sideboards, side tables and more on 1stDibs.

About the Seller
No Reviews Yet
Located in Las Vegas, NV
Vetted Seller
These experienced sellers undergo a comprehensive evaluation by our team of in-house experts.
Established in 2017
1stDibs seller since 2021
20 sales on 1stDibs
Typical response time: <1 hour
More From This SellerView All
People Also Browsed
You May Also Like