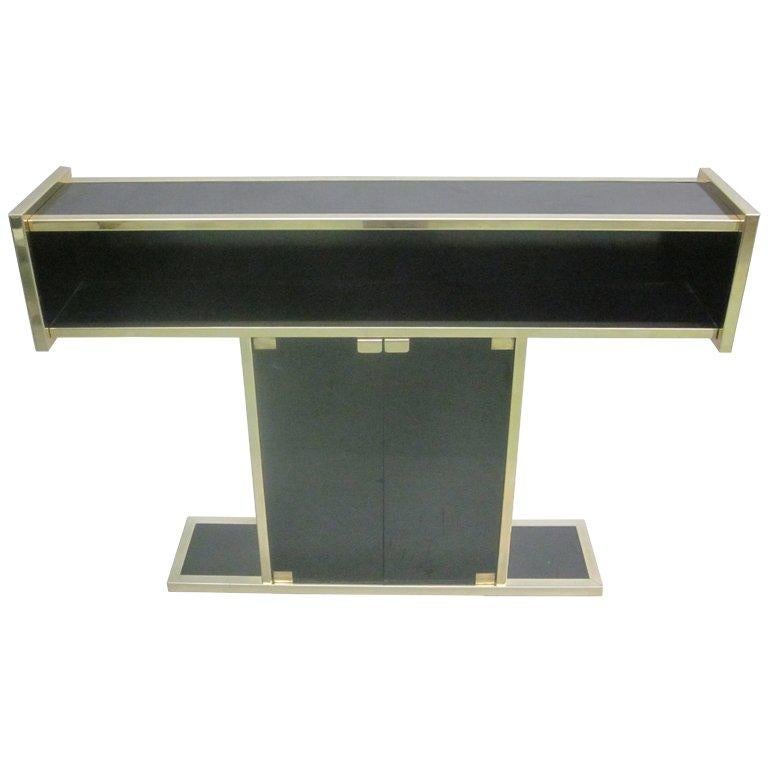 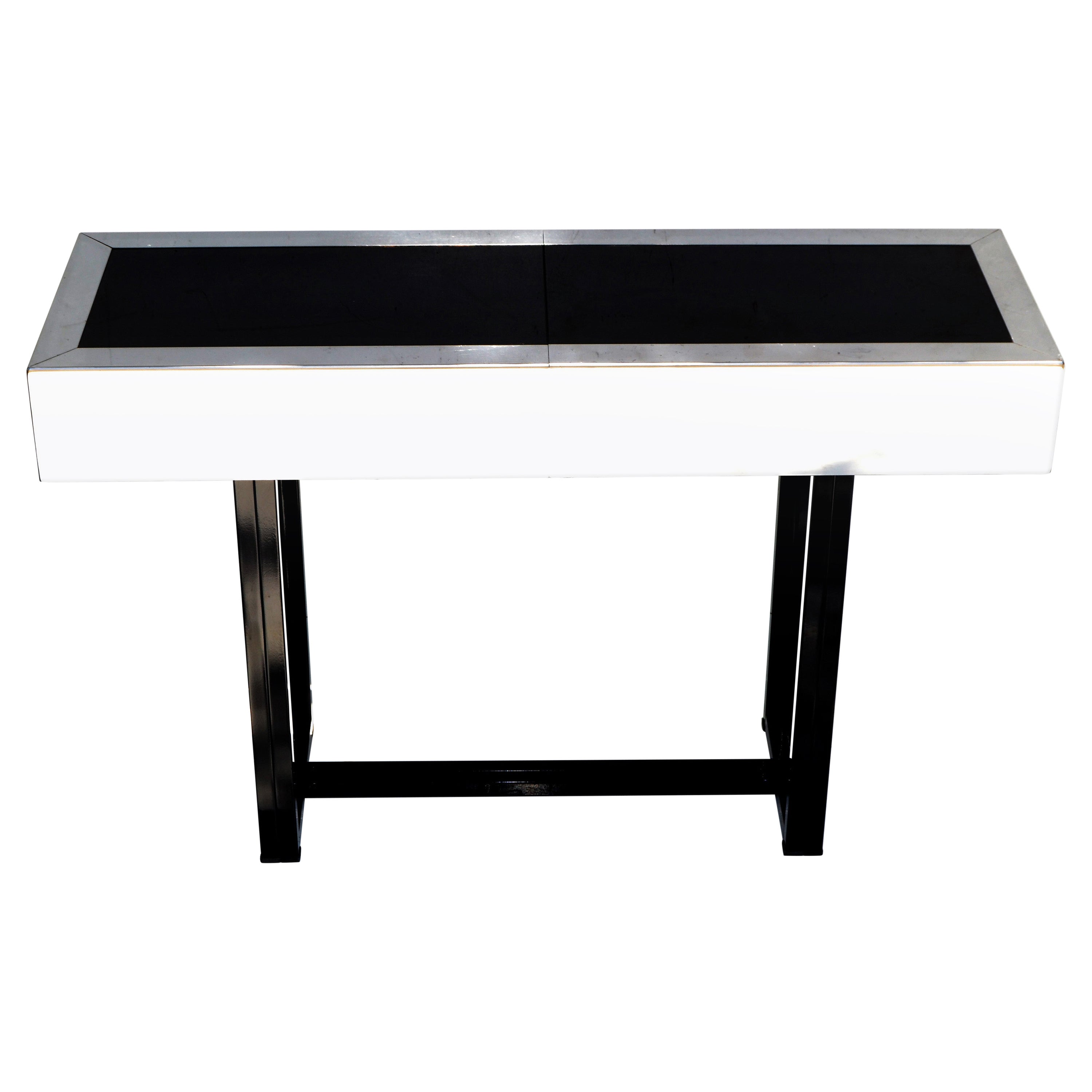 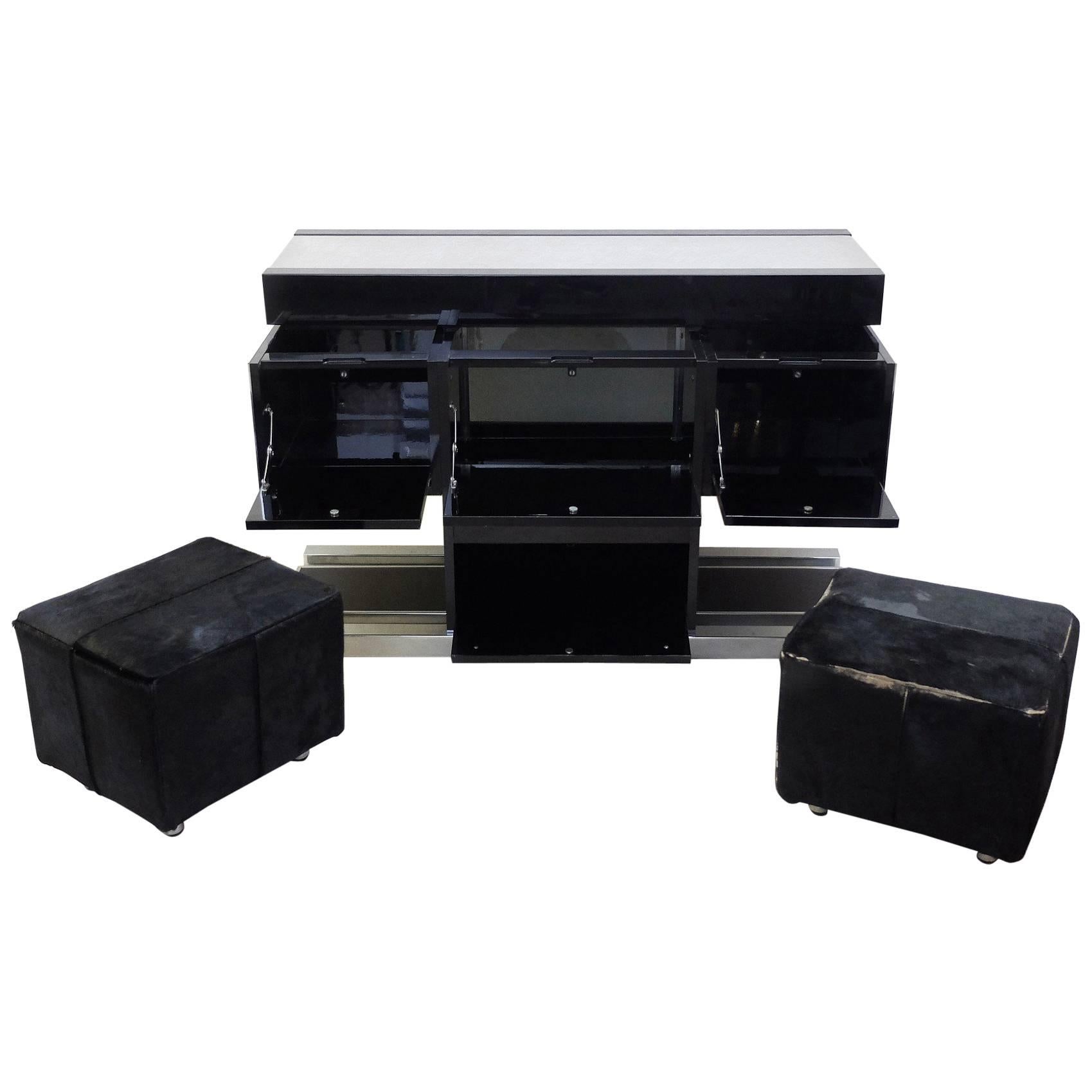 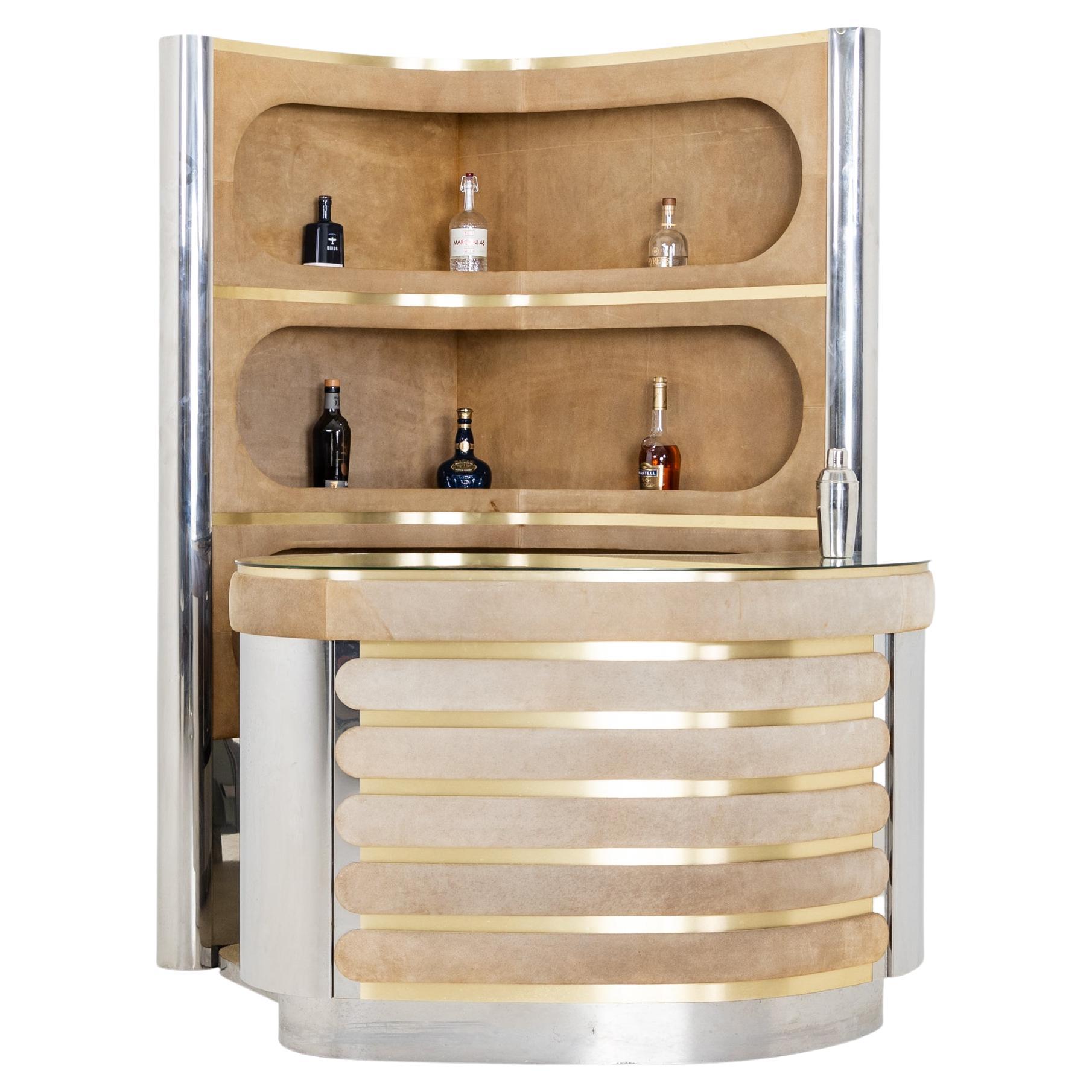 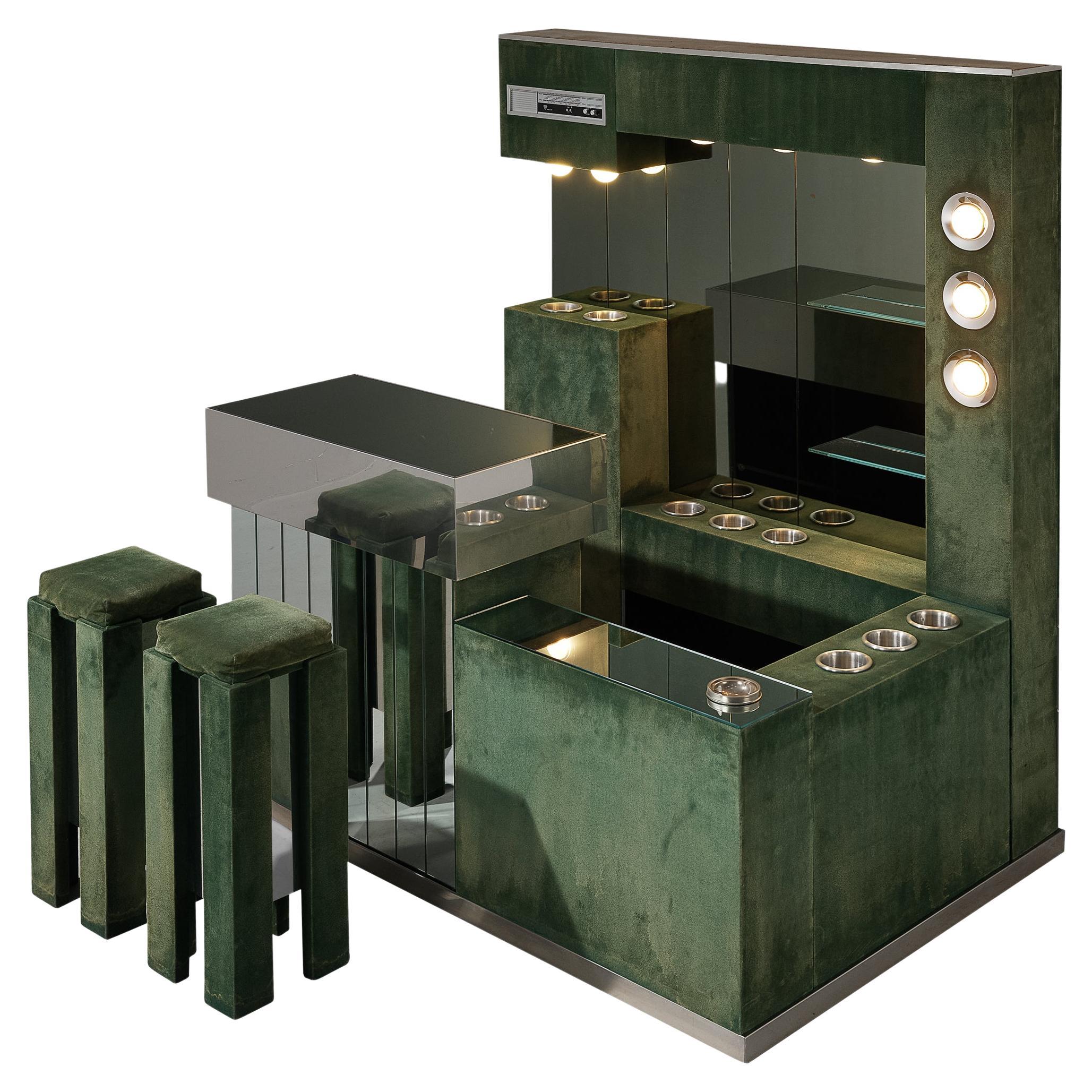 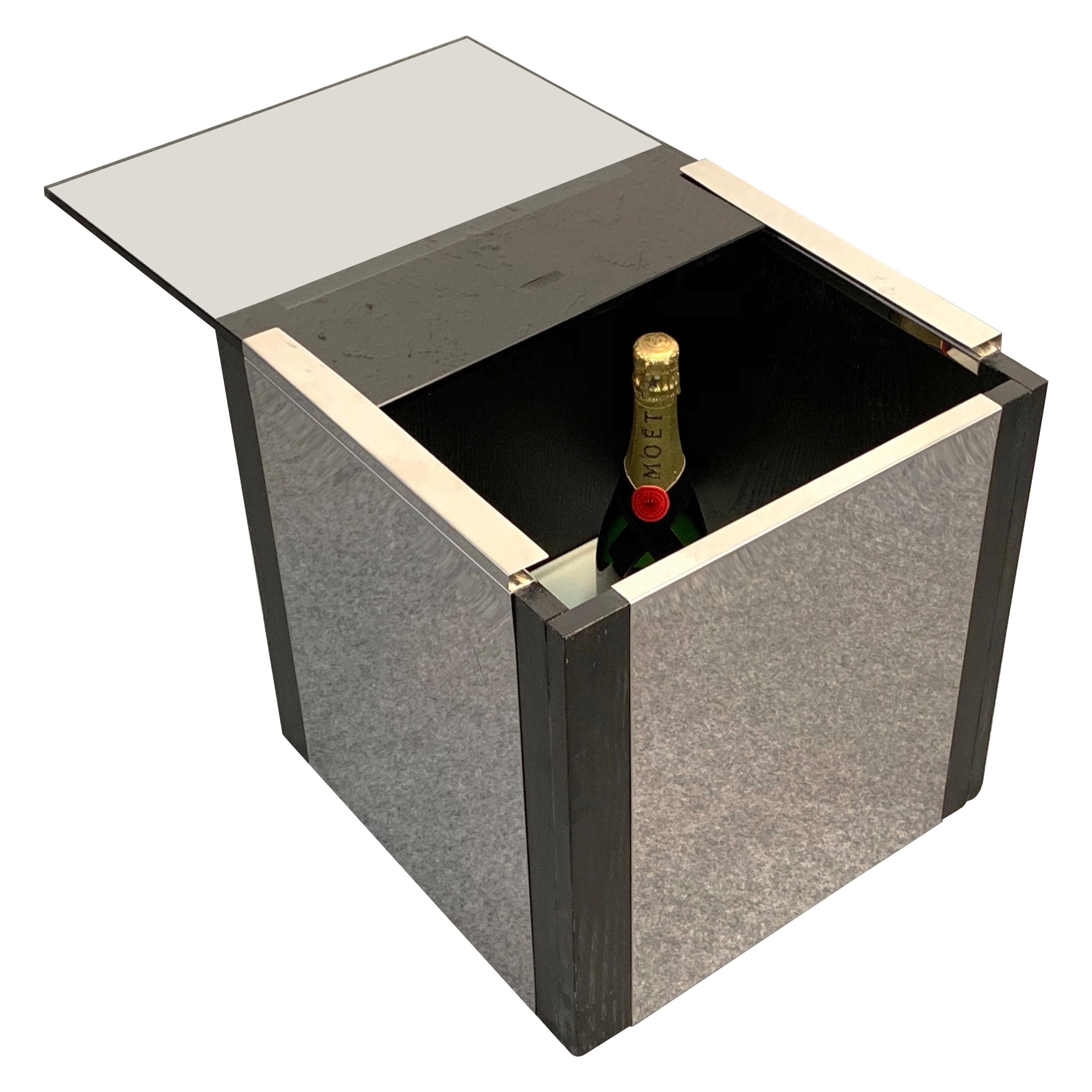 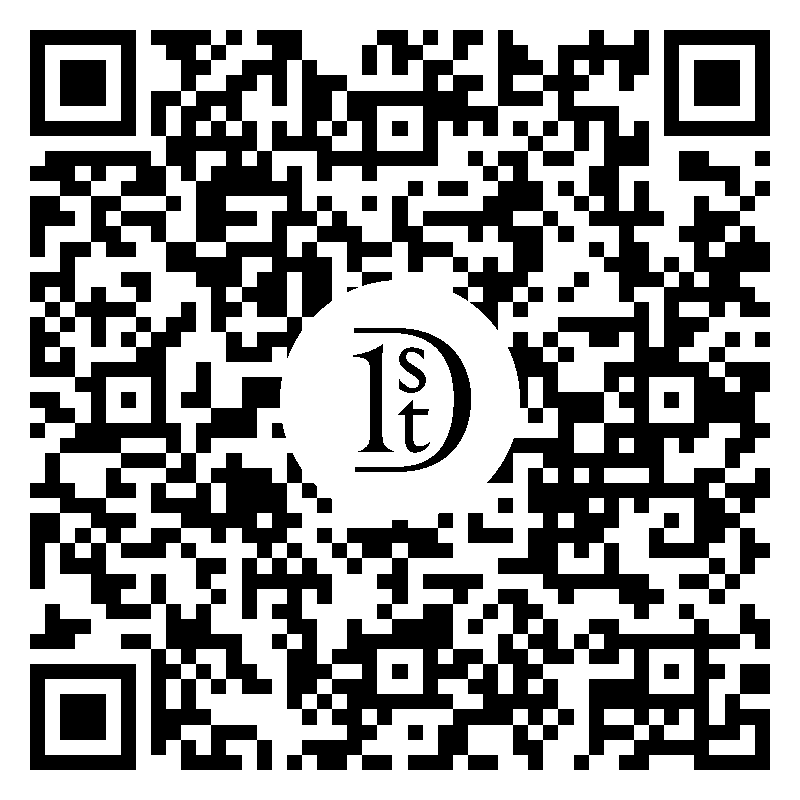 Stunning bar cabinet in very good condition. This bar was originally designed by Willy Rizzo in 1969 for his Apartment in Rome. It is finished with a black laminate and stainless steel details. The bar has three doors which can be opened with these lovely spring loaded discs that push in with the lightest of touch and allow you to pull the door open. Behind the right door you can find a small build in fridge. (If necessary we can make the fridge suitable for US use) If you open the hinged top you gain acces to the build in bottle holder and space for glasses. The inside is finished with polished steel which gives a mirror effect, there is place for six large bottles and two extra large bottles. Under the polished steel bottle holder are adjustable shelves which allow you to place the bottles in different heights. Signed ‘Willy Rizzo” The last photo is from the official Willy Rizzo site. Italian designer and photographer Willy Rizzo (1928-2013) first came to prominence in the 1960s as both a chronicler of and participant in La Dolce Vita, the glamorous, jet set lifestyle enjoyed by many international celebrities and socialites in the postwar era. While photography was Rizzo’s first love, in the 1970s he developed a passion for interiors and launched a second successful career as a luxury furniture designer. Rizzo was born in Naples in 1928 but moved to France at an early age. After expressing an interest in photography at the age of 12, Rizzo’s mother gifted him an Agfa Box camera; soon he was shooting portraits of his classmates at Paris’s Istituto Statale Italiano Leonardo Da Vinci. In the 1940s, Rizzo began his career as a photojournalist, working for several French publications, including Ciné Mondial, Point de Vue, and Image du Monde. In the aftermath of the Second World War, Rizzo notably covered the Nuremberg Trials and traveled to Tunisia for Point de Vue to photograph the conflict in North Africa, which was later published in Life Magazine. As his reputation grew, he was hired by France Dimanche to take portraits of the rich and famous at flashy events like the Cannes Film Festival. Rizzo’s charm won the trust of royalty, dignitaries, and movie stars, which allowing him to capture these public figures in unusually candid moments. Hoping to advance his career even further, Rizzo traveled to New York with Black Star Agency in 1947 to photograph American starlets. When he returned to Paris two years later, he was invited to join Jean Prouvost’s newest publication in color, Paris Match, as head photographer—a position that he held for 20 years and, along the way, sparked a new culture of celebrity photographers who were as intriguing and fashionable as their subjects. In 1959, he became the artistic director of Marie Claire and collaborated with other fashion magazines, such as Vogue. Over the course of his career, Rizzo photographed dozens of stars, including Brigitte Bardot, Maria Callas, Salvador Dalí, Marlene Dietrich, Jane Fonda, Gene Kelly, and Gregory Peck, as well as striking up close friendships with famous personalities like Coco Chanel, Christian Dior, and Jack Nicholson. In 1962, Rizzo famously captured some of the last moments of Marilyn Monroe’s life on film before she tragically committed suicide a few weeks later. In 1968, Rizzo married Italian actress Elsa Martinelli, and the pair relocated to Rome. It was here that Rizzo began his work in furniture design, starting with his newly-leased, run-down Roman apartment. Just for personal use (at first), Rizzo created a series one-of-a-kind pieces inspired by modernist icons, such as Mies van der Rohe and Le Corbusier. But as his glitterati friends—Rodolfo Parisi, Gigli Rizzi, Franco Rapetti, Salvador Dalí, Brigitte Bardot, and the like—became admirers of his work, Rizzo was flooded with design commissions. Rizzo went on to furnish apartments for Italian aristocracy in the Palazzo Borghese and Palazzo Ruspoli that same year and quickly earned an international reputation as a designer to the rich and famous. In response to ever-growing demand, he launched his own Tivoli-based company dedicated to contemporary furniture design handmade in lux materials such as wood, marble, stainless steel, brass, and wild boar. Over time, his team of eight grew to 150, and he was able to open shops in France and throughout Europe, as well as in New York, Miami, and Los Angeles. With an emphasis on clean lines and geometric forms, Rizzo’s tables, chairs, and accessories combined contemporary shapes with traditional materials—in contrast to many of his contemporaries, like Ettore Sottsass and Vico Magistretti, who were popularizing plastic, foam, and other synthetics in furniture production. Among Rizzo’s most successful designs are many low, box-like tables in granite, metal, glass, or burled wood, often embellished with brass or chrome accents or built-in liquor cabinets or trays. Two examples of his most celebrated designs include the Alveo Coffee Table (1970s) for Mario Sabot and the circular Yin Yang Coffee Table (1970s). His plush sofas and geometric lamps also remain highly collectible today. In 1978, Rizzo sold his company and returned to photography. However, he never stopped designing furniture and worked on his designs until he passed away in Paris in 2013, at the age of 84. He is survived by his wife and two daughters, who continue to run the Paris studio. His furniture has been exhibited in many international museums and galleries, including the Metropolitan Museum of Art in New York and at the Opera Gallery in Monaco. 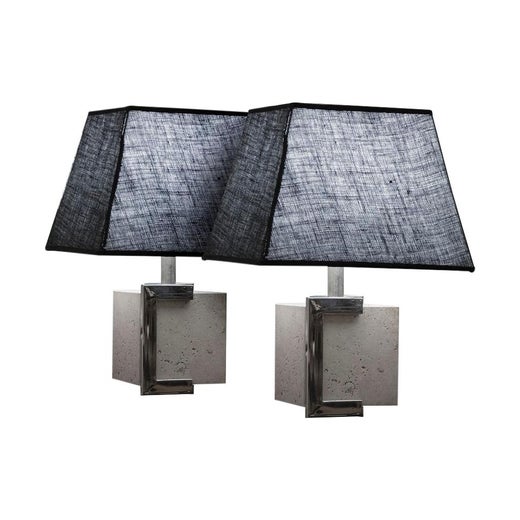 Renowned Italian furniture designer Willy Rizzo is celebrated for having produced eye-catching, sensational showpieces that merged plush fabrics with wood, metal and glass. Influenced by European modernists and drawing on the spare forms and clean lines of the American mid-century modern style, Rizzo prized functionality and simplicity in his dazzling work.

Born in Naples, Rizzo never intended on designing furniture. Instead, he began pursuing photography at the age of 12. By the 1960s, he had become a notable photographer, having captured images of such celebrities as Marilyn Monroe, Fred Astaire and Spanish artist Salvador Dalí. His experience with furniture design came about inadvertently when he moved to Rome in 1966. There, Rizzo rented an apartment with his wife Elsa that he described as "practically uninhabitable." Dissatisfied with the Scandinavian furniture options on offer, Rizzo built sofas, coffee tables and other furniture to suit the space's strong modern vibe. When his friends saw what he had accomplished, they were enamored by his furniture creations and commissioned him to build similar items for them.

The demand for Rizzo’s furniture grew from there. He established a production facility and workshop in Tivoli, just outside of Rome, which grew to house over 150 employees. There, finding inspiration in the work of iconic architects including Ludwig Mies van der Rohe and Le Corbusier, he created more than 30 unique furniture designs. Over the years he opened boutiques around the world to showcase and sell his furniture.

Rizzo prided himself on seamlessly blending the contemporary with the classic. “It was about creating something new for a traditional setting,” he said of his work. From his sleek sideboards to his low-profile side tables, elegant chairs and entire living room sets, Rizzo's style sensibility is evident throughout every detail of his designs.

Rizzo sold his company in 1978 and returned to photography. However, the presence of his furniture resonated into the new century and is sure to impact interior décor enthusiasts into the next. Over the years, high-profile collectors of Rizzo’s work have included French actress Brigitte Bardot, Salvador Dalí and American musician Lenny Kravitz.

About the Seller
4.9
Located in Echt, Netherlands
Platinum Seller
These expertly vetted sellers are 1stDibs' most experienced sellers and are rated highest by our customers.
Established in 2012
1stDibs seller since 2016
271 sales on 1stDibs
Typical response time: 2 hours
More From This Seller

$5,450
Willy Rizzo Dry Bar Set, Italy, 1970s
By Willy Rizzo
Located in Brussels, BE
Bar with two pouf by Willy Rizzo. It had been made during the 1970s.
Category