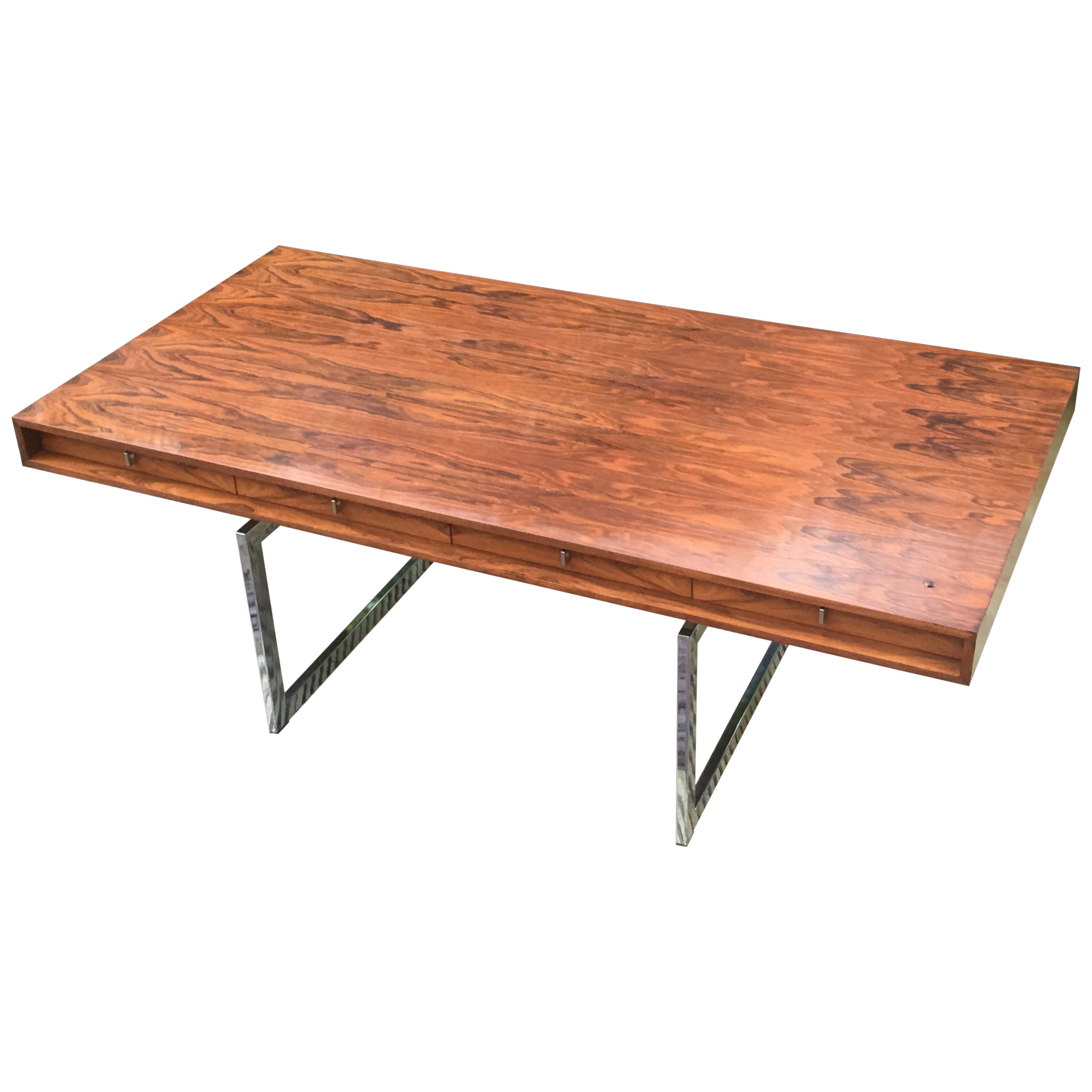 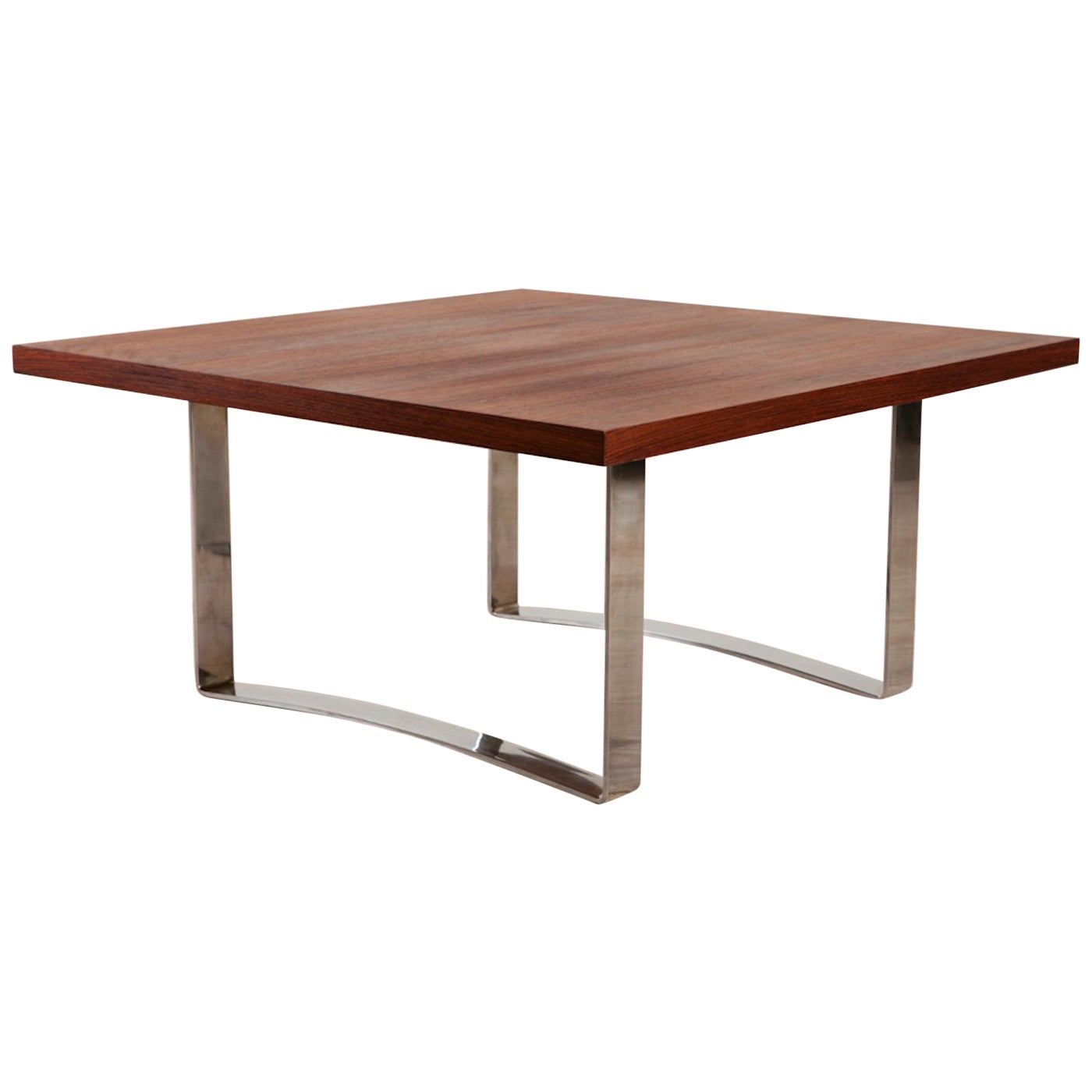 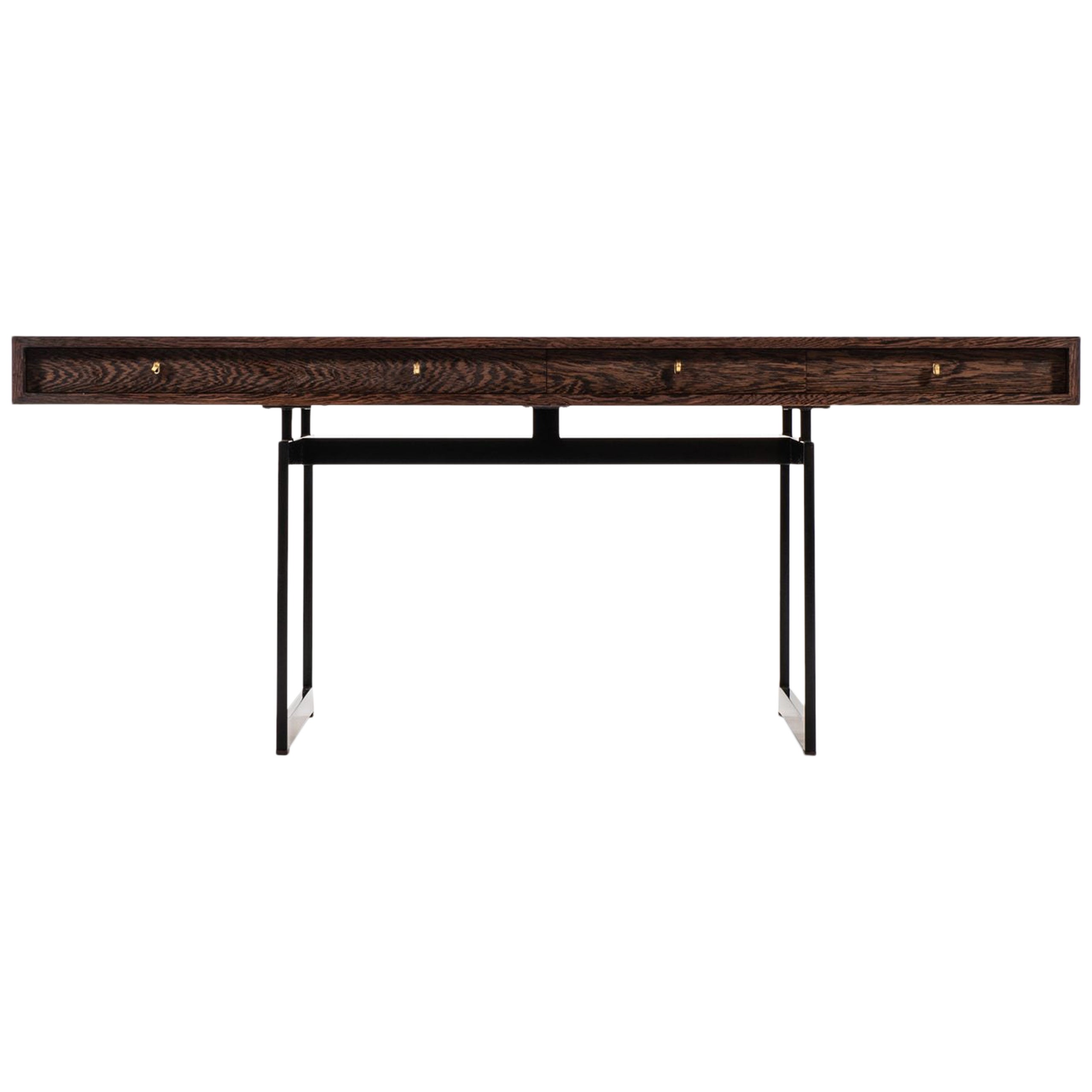 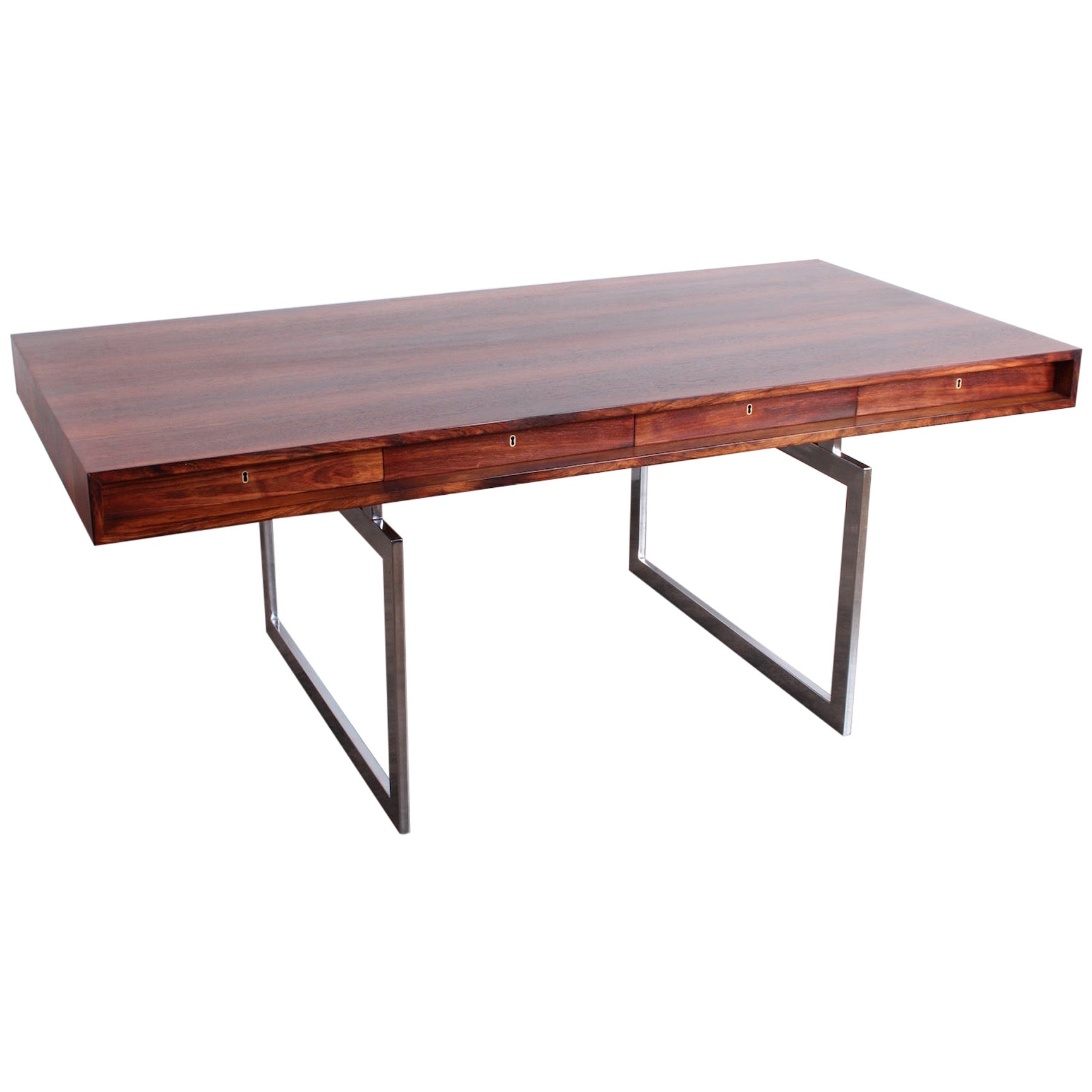 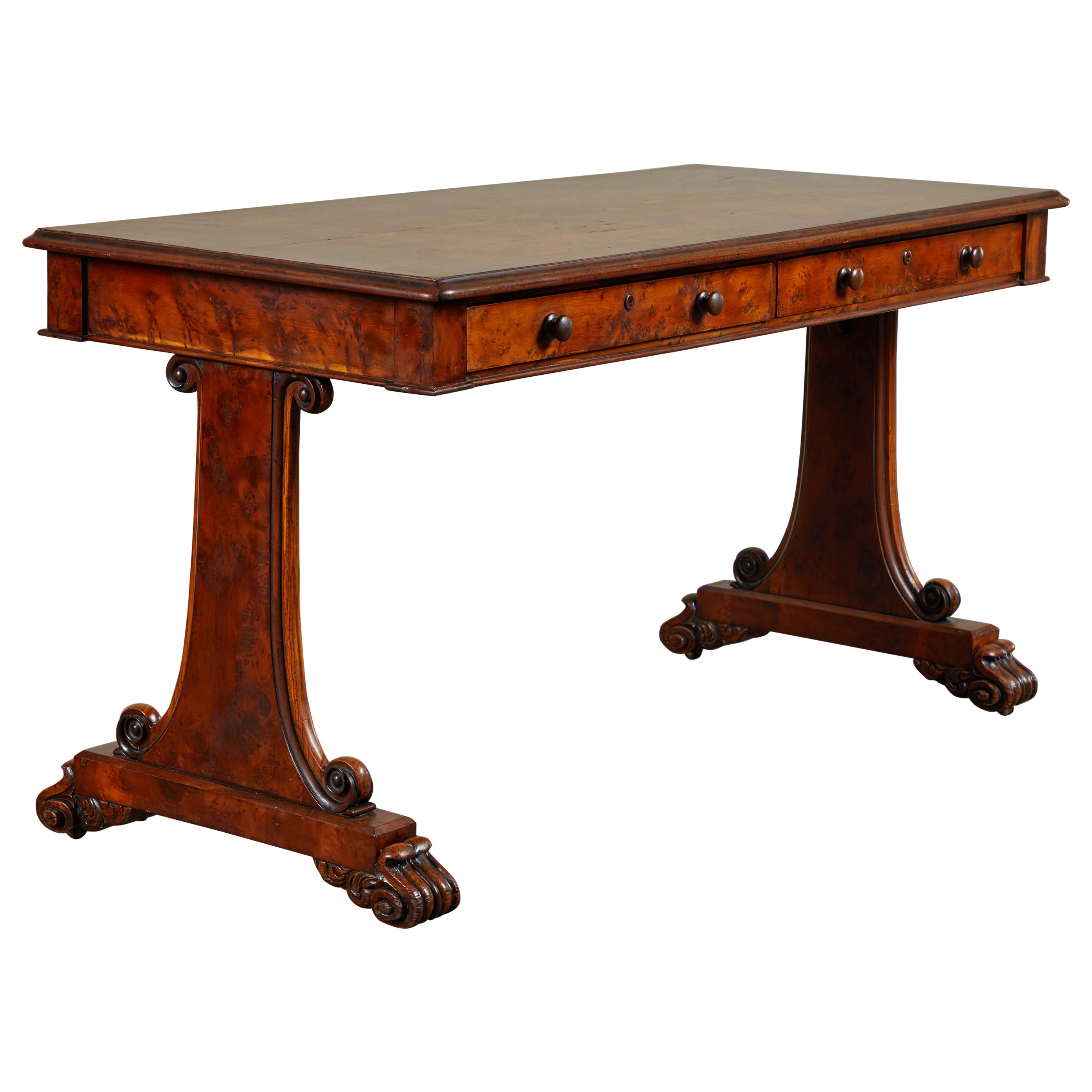 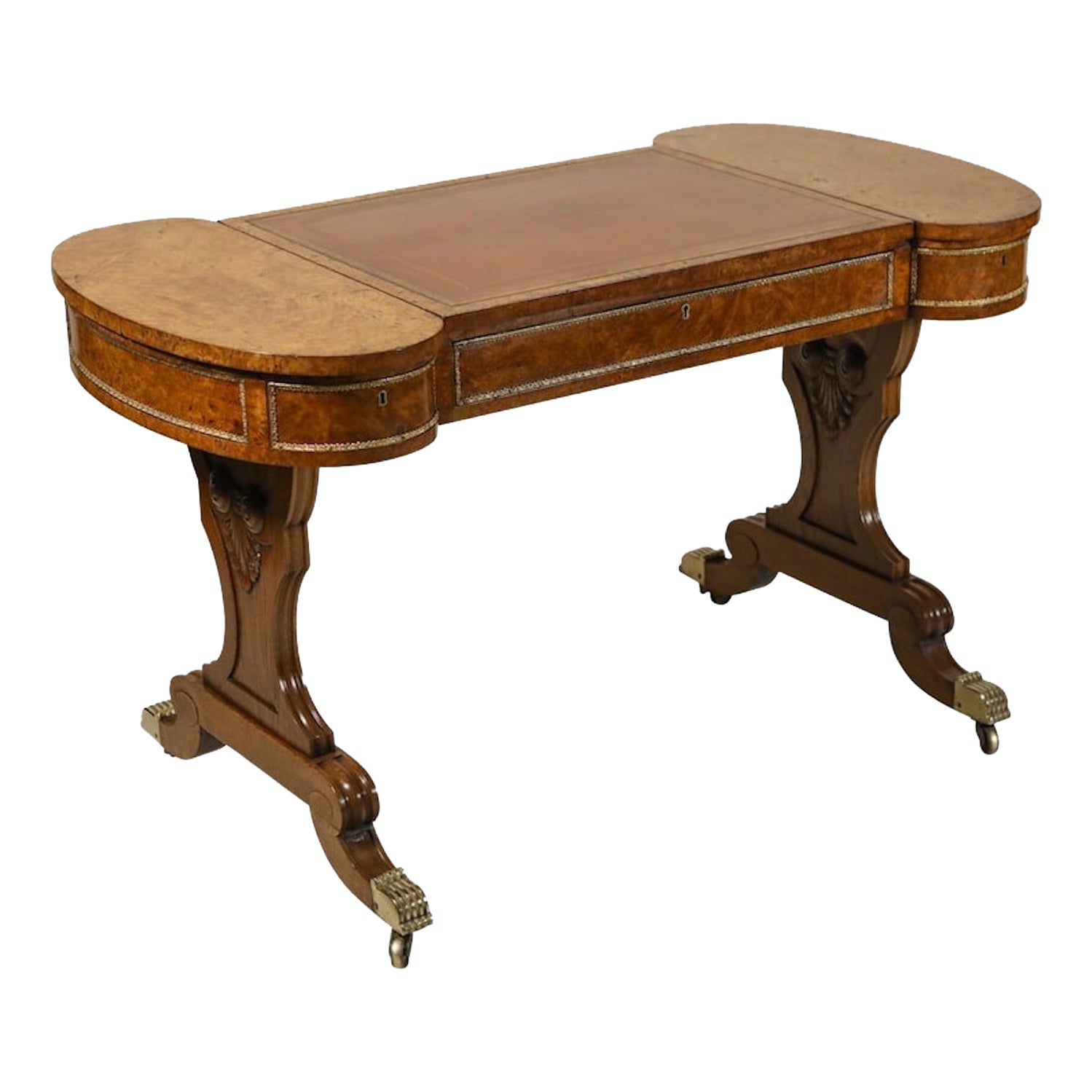 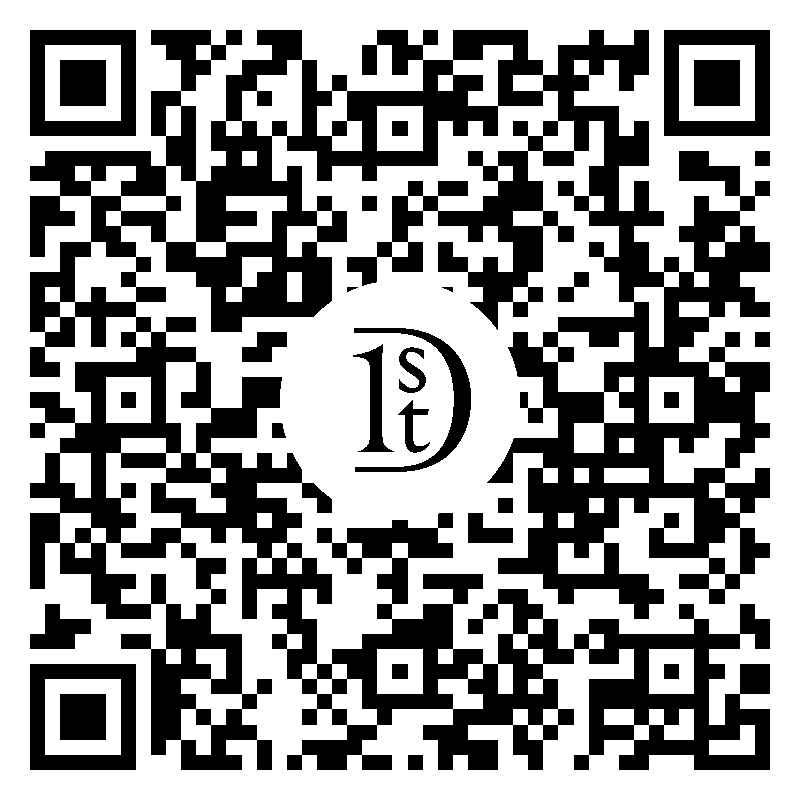 Bodil Kjaer for E. Pedersen & Søn, table model 901, Brasilian hardwood and chrome steel, Denmark, 1959. This free-standing desk in rosewood is designed by the Danish designer Bodil Kjaer. The desk can be used with multiple purposes, as a writing table, desk or just 'work table', as Bodil Kjaer herself called it. According to Bodil Kjaer the idea of the table is, "that it should be suitable with modern art and architecture." The table is part of a larger series of elements of architecture in 1959, with the intention to build flexible working environments. The series was produced from 1959 by C.I. Designs, Boston, USA, and from 1961 by E. Pedersen & Søn, Denmark. This piece shows an interesting rhythm of horizontal and vertical lines, as do most of Kjaer's designs. The front is divided into four drawers. The back has the same sized gap yet without the drawers. This aesthetic choice unites the back and front and turns it into a monumental, architectural piece. The handles are all executed with a whole in the middle for functionality. The table's rise to fame was helped by its appearance in James Bond - From Russia with Love. Bodil Kjaer (1932-) is trained as an architect and is known mostly known for her designs in noble woods combined with a modern and sleek chrome base. The most important part of her furniture design career was from 1959-1964. She is mainly recognized for her flexible office furniture, designed in the 1960s. Her design language is greatly inspired by the Modernist masters such as Ludwig Mies van der Rohe. Her furniture has been greatly used in public buildings such as Harvard University and Massachusetts Institute of Technology. VAT within the EU: When buying or delivering an item within the EU, VAT usually applies and will be added.

Recognized Seller
These prestigious sellers are industry leaders and represent the highest echelon for item quality and design.
Diamond Seller
These expertly vetted sellers are 1stDibs' most experienced sellers and are rated highest by our customers.
Established in 2006
1stDibs seller since 2012
3,126 sales on 1stDibs
Typical response time: 1 hour
Associations
20th Century Specialists
More From This Seller
View All From Seller

4-Drawer Bodil Kjaer Desk for E. Pedersen & Son
By Bodil Kjaer, E. Pedersen & Søn
Located in Little Burstead, Essex
His stunning and very rare desk, originally called a 'working table' by it's designer when she designed it in 1959 for the Massachusetts Institute of Technology, is an absolute desig...
Category

$12,351
French Early 19th Century Birch Writing Table with Marble Top
Located in Baton Rouge, LA
A breathtaking birch writing table, made at the beginning if the 19th century in France. The marble top is a rich cinnamon color, with vibrant flashed of white throughout, and a wond...
Category