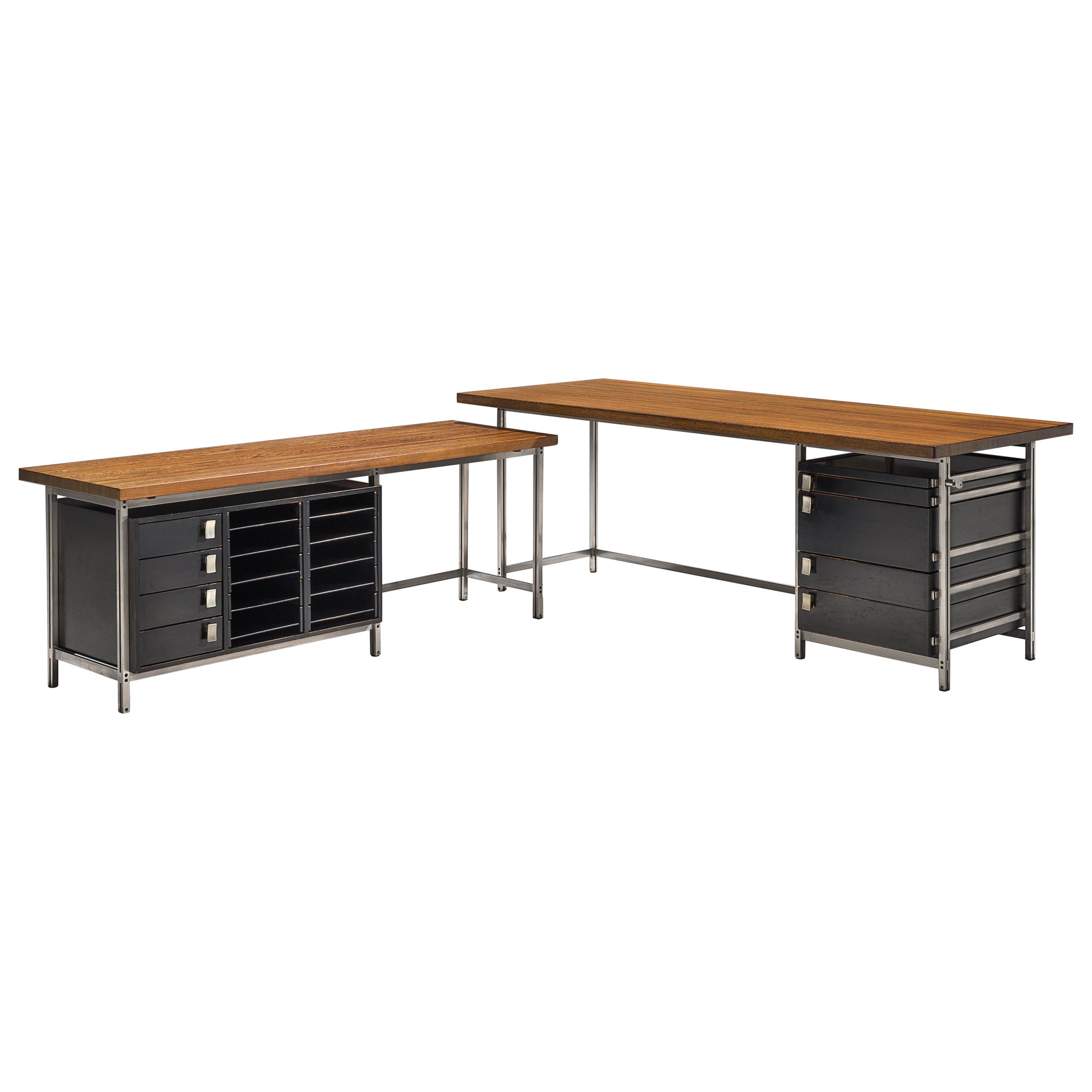 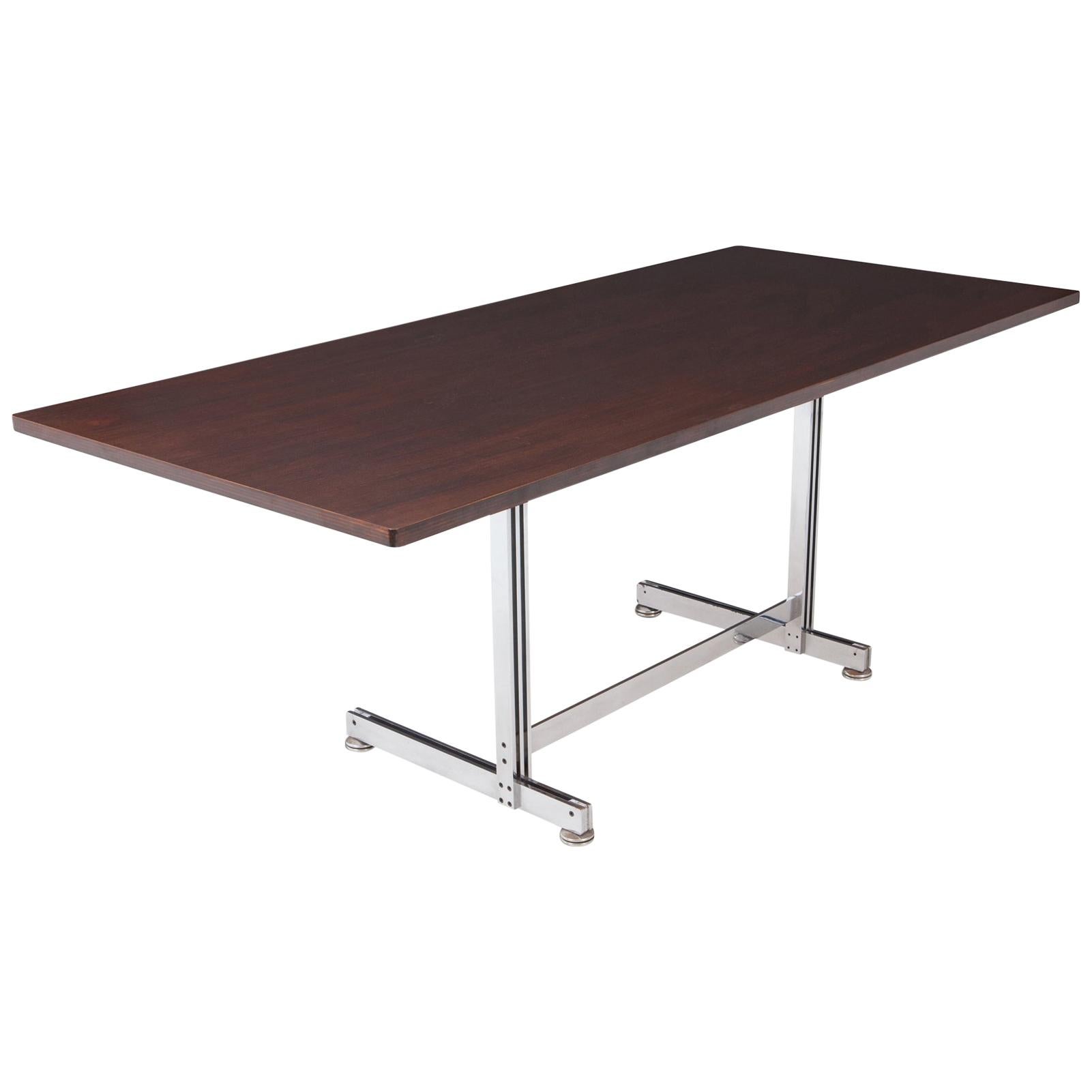 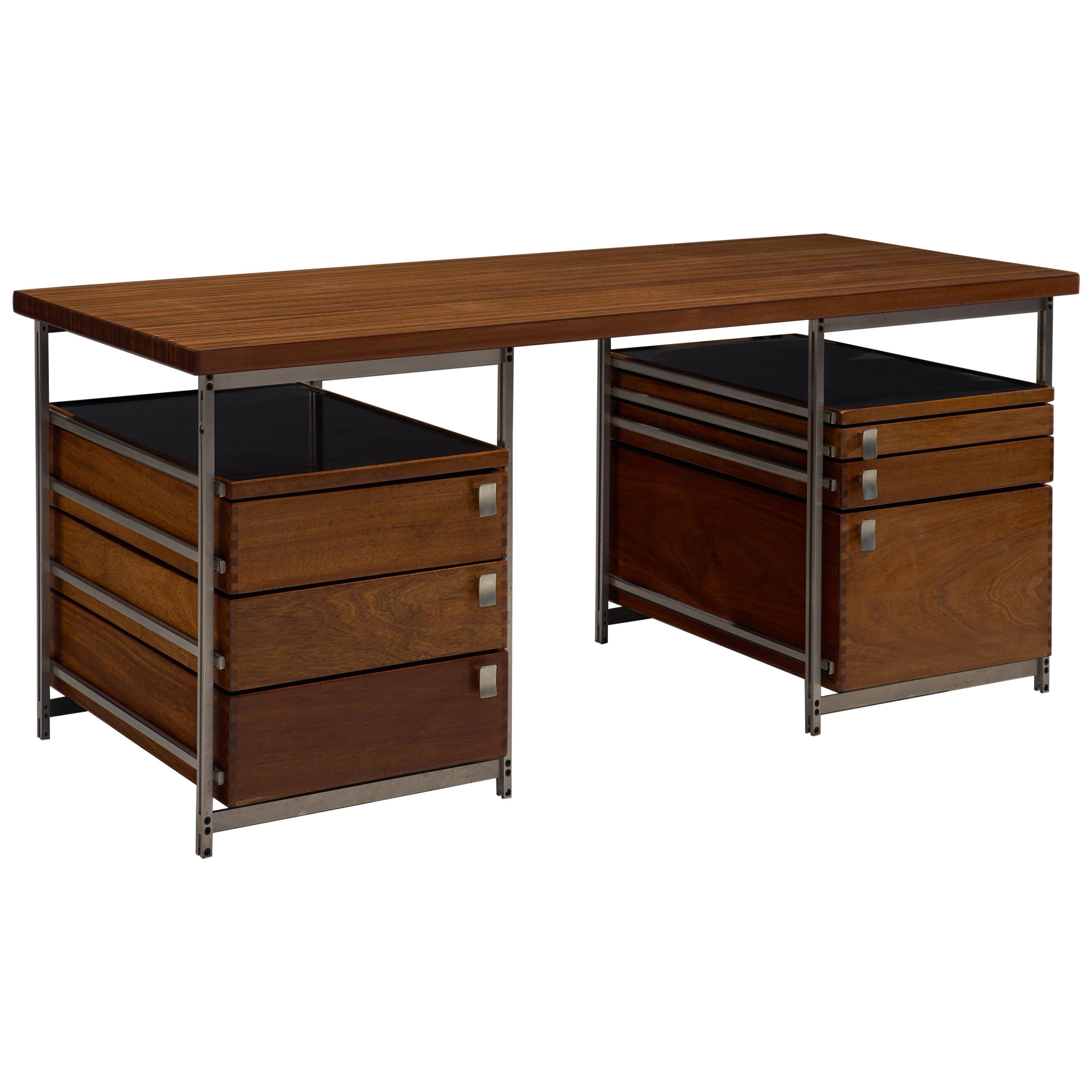 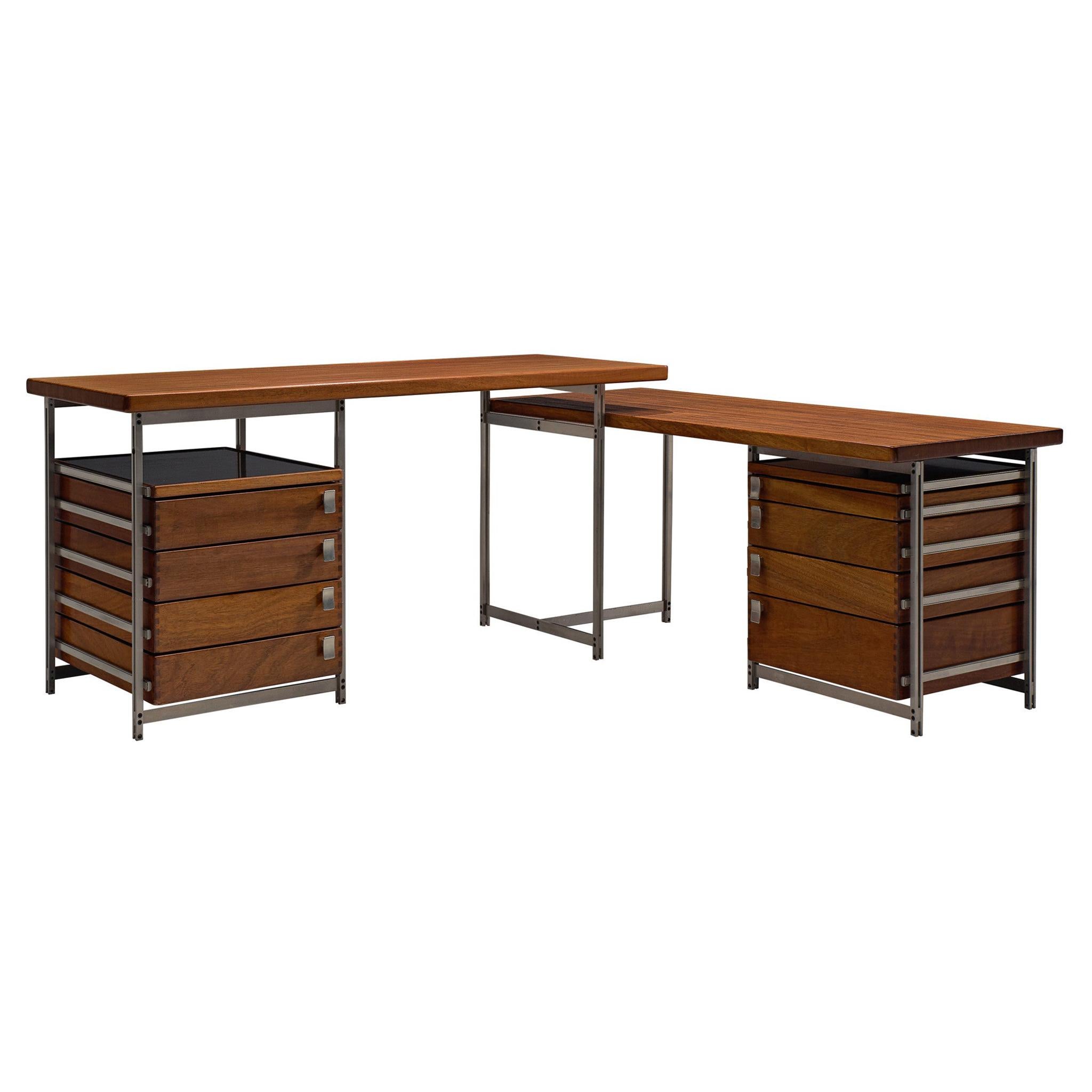 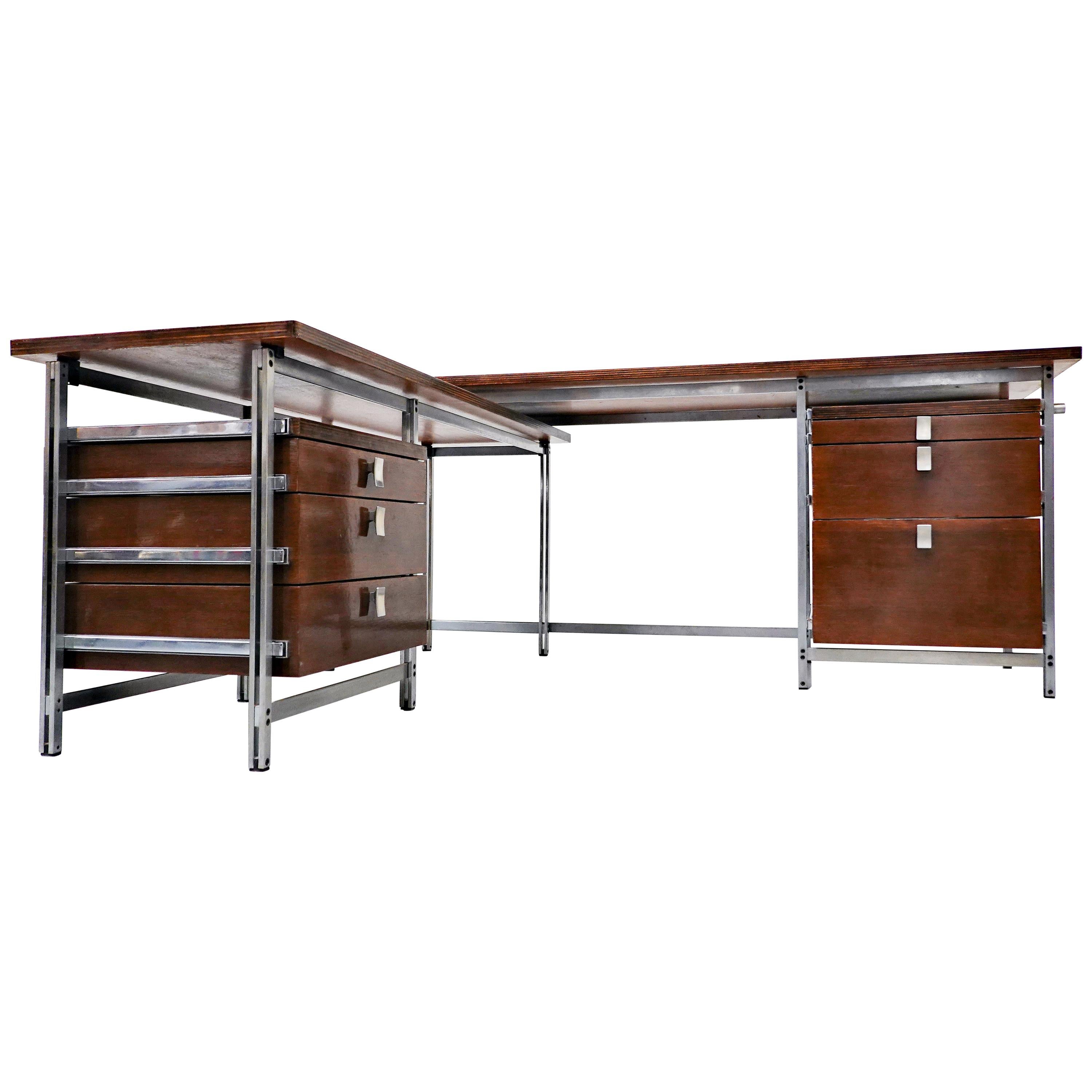 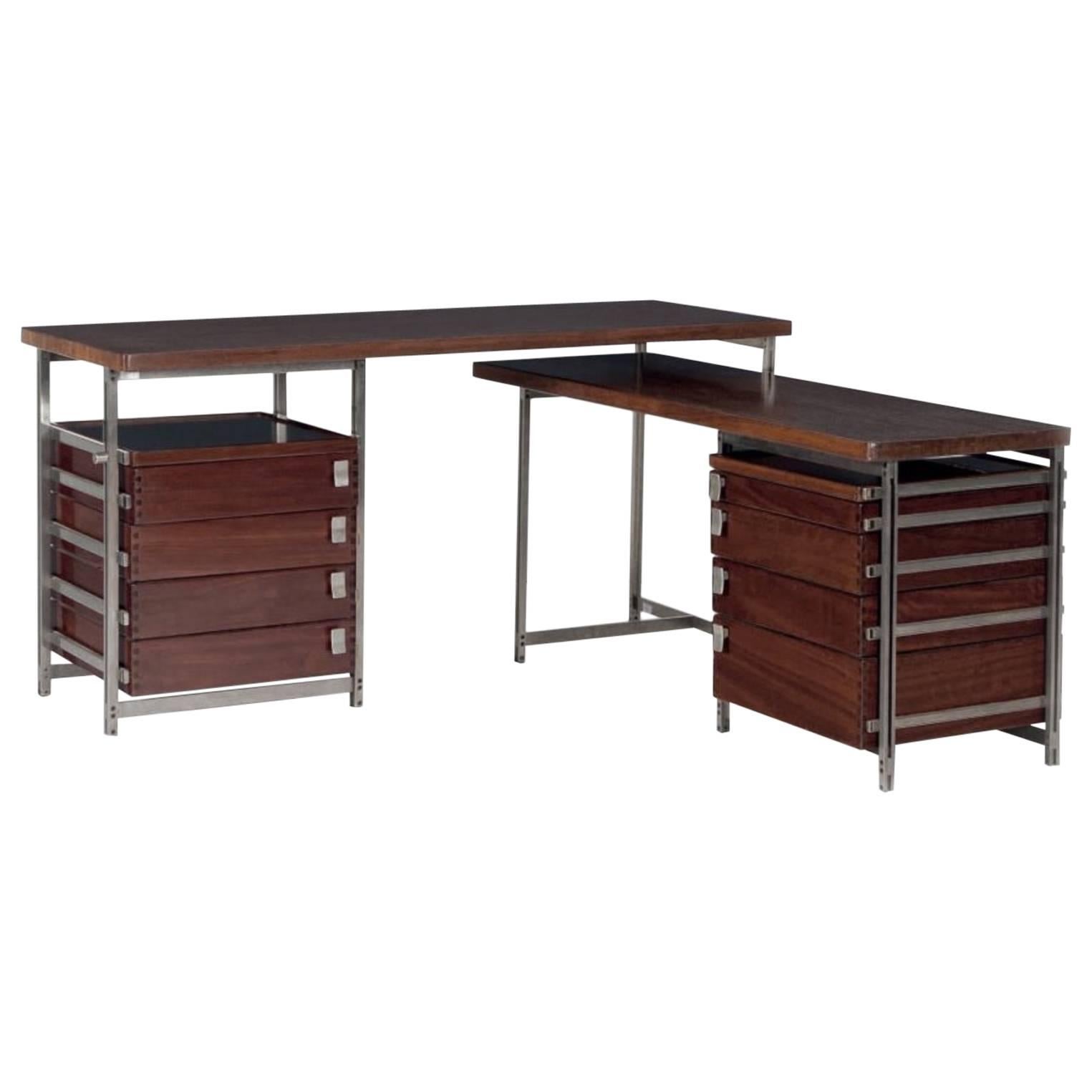 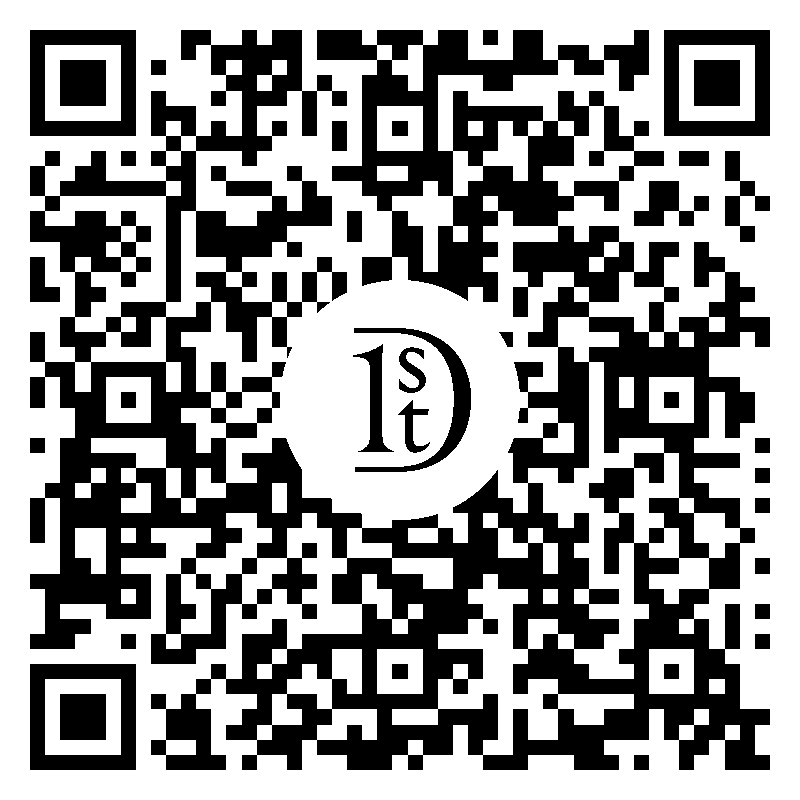 Jules Wabbes, two-part corner writing desk, teak, black metal, chrome, Belgium, 1960s This free-standing corner desk is designed by Jules Wabbes in the 1960s. It consists out of two tables, each with a chest of drawers, in different heights. Due to the fact that both parts are constructed independent they can either be placed together to form a corner desk or arranged separately as two tables apart. The black wengé tabletop is matching wonderfully with the black metal frame, the teak drawers and chrome runners at the side. The drawers feature the characteristic handles, all ingraved with 'WABBES'.  Jules Wabbes (1919-1974) was one of the leading Belgian furniture designers and interior architects of the Postwar period. Born in Brussels in 1919, he began his career as an actor. However, after several other professions, he eventually started to become interested in antiques. When Wabbes was 24, he opened an antiques shop where some of the furniture needed restoration. Therefore, he created a small workshop where he taught himself how to restore furniture. Therefore, In contrast to many of his contemporaries, he wasn't trained as a designer or architect but learned the craft of designing furniture by sheer necessity. Alongside restoration, he also started to design furniture. Because of the success of his ventures, it led to Wabbes designing many interiors for his clients. In 1971, Wabbes became professor at the Sint-Lucasinstituut in Brussels. Unfortunately, Wabbes died at an early age in 1974 due to cancer. Overall, his work is aristocratic and modest, and characterized by a sensual use of materials and a clear, almost architectural tectonics. Wabbes developed a line and idiom of its own, averse to the playful and swinging style of many other furniture designs of the Postwar period. Wabbes, influenced by American designers such as Edward Wormley, chose to build his furniture with solid wood giving his designs not only a luxurious appearance but also honest, timeless and sophisticated aesthetics.

Recognized Seller
These prestigious sellers are industry leaders and represent the highest echelon for item quality and design.
Diamond Seller
These expertly vetted sellers are 1stDibs' most experienced sellers and are rated highest by our customers.
Established in 2006
1stDibs seller since 2012
3,489 sales on 1stDibs
Typical response time: 1 hour
Associations
20th Century Specialists
More From This Seller