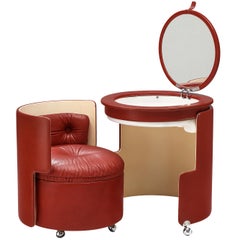 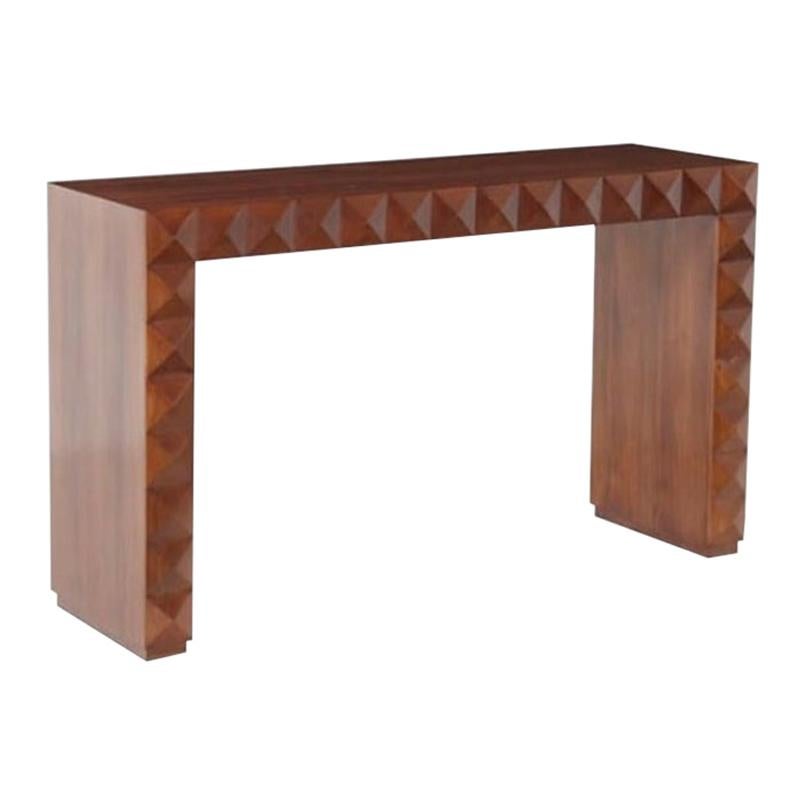 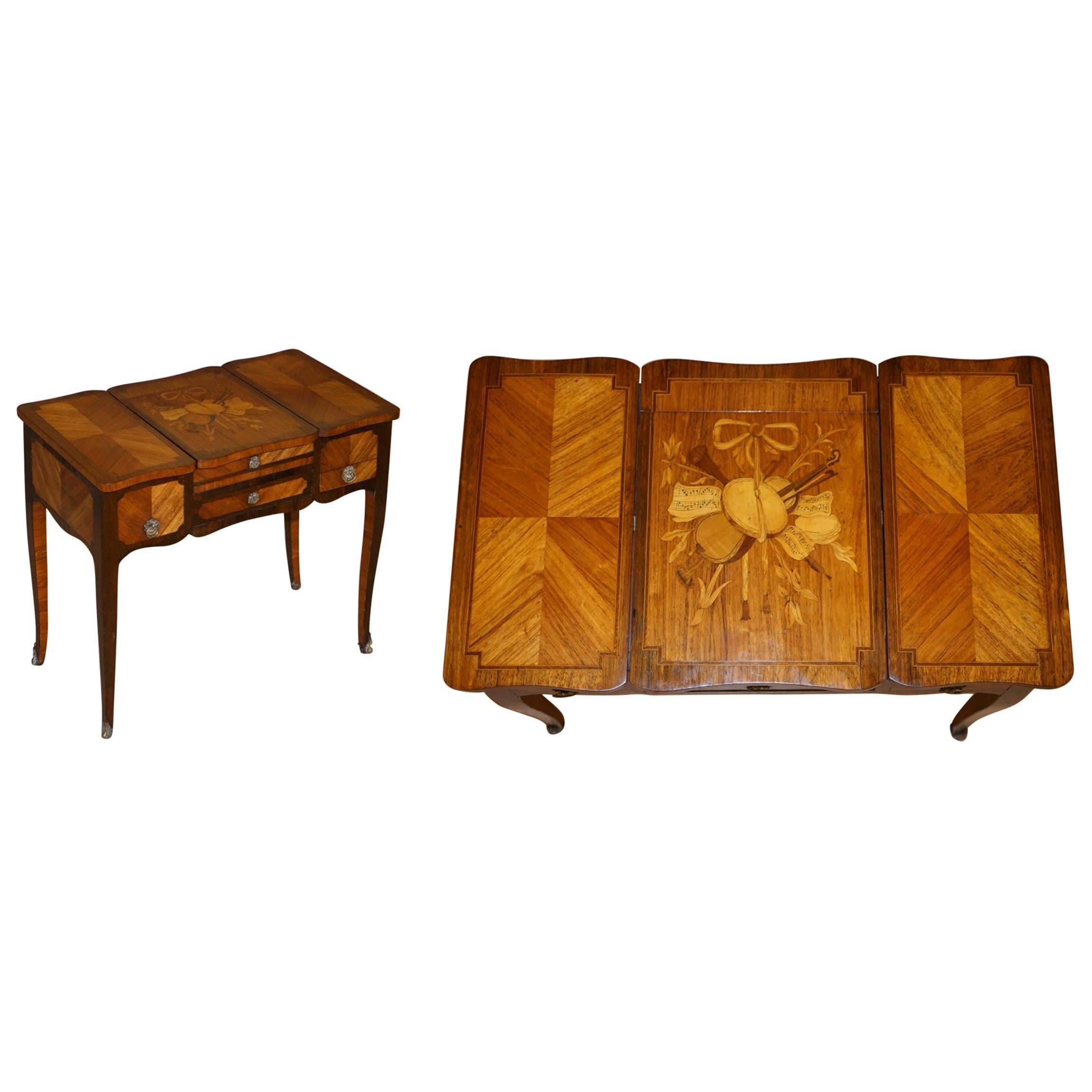 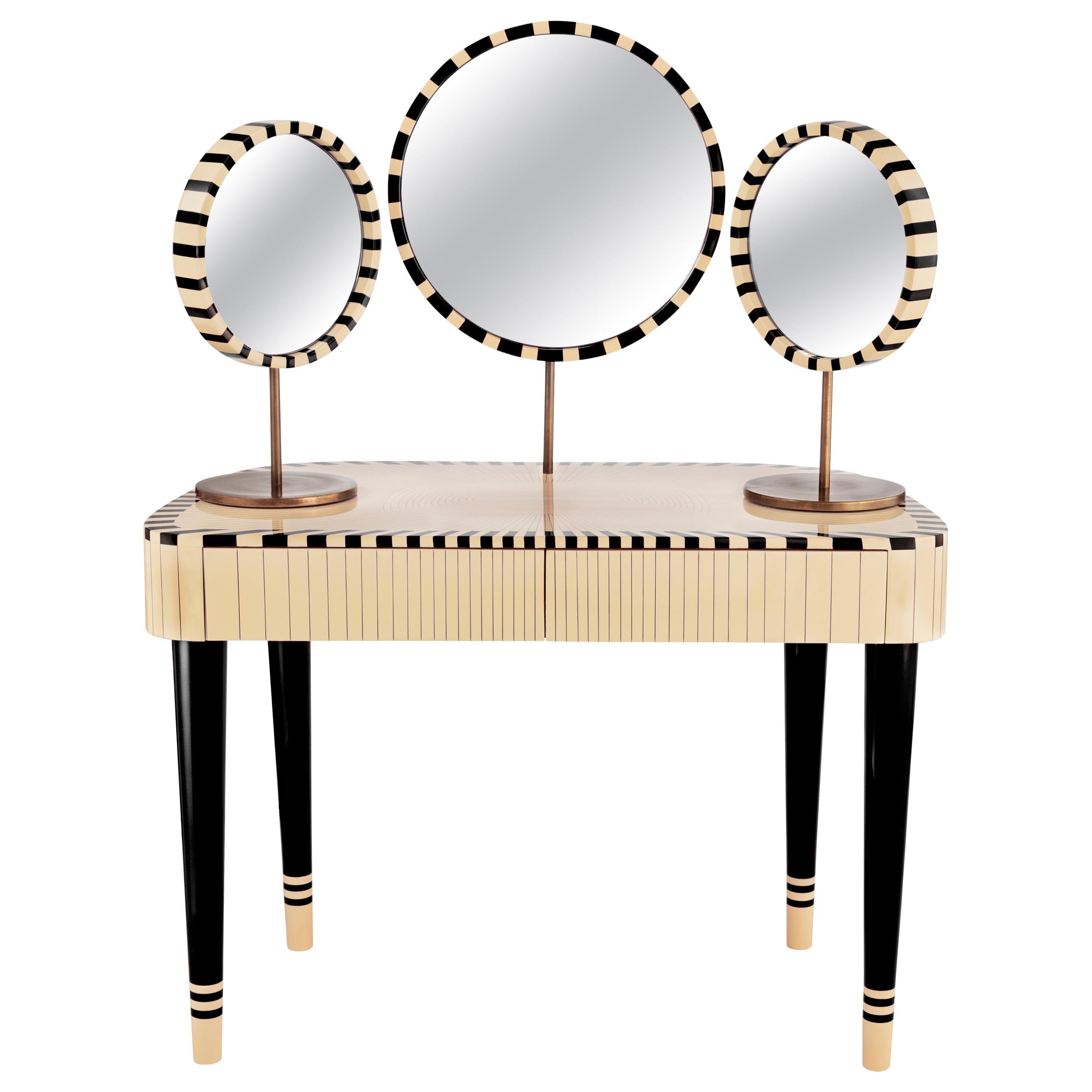 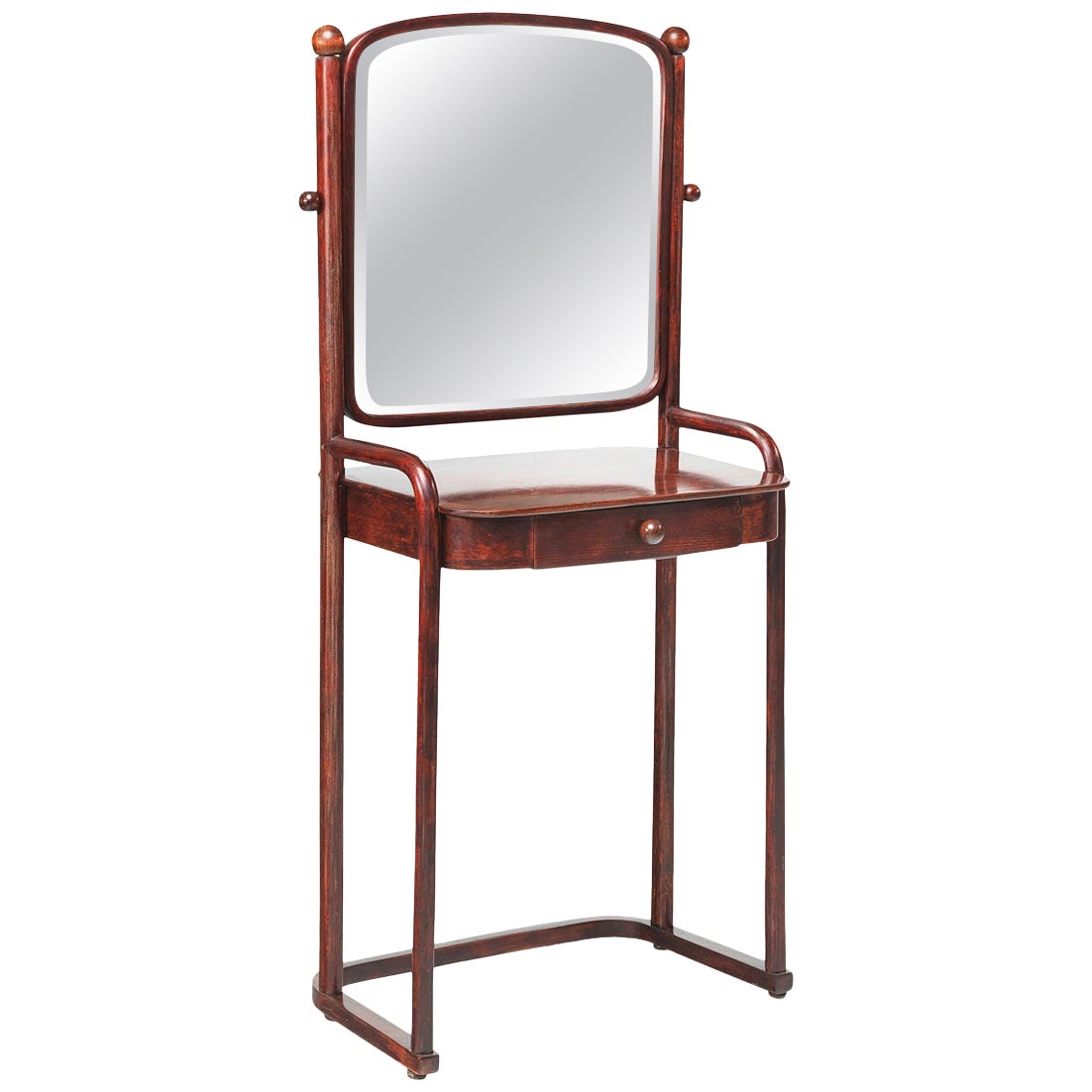 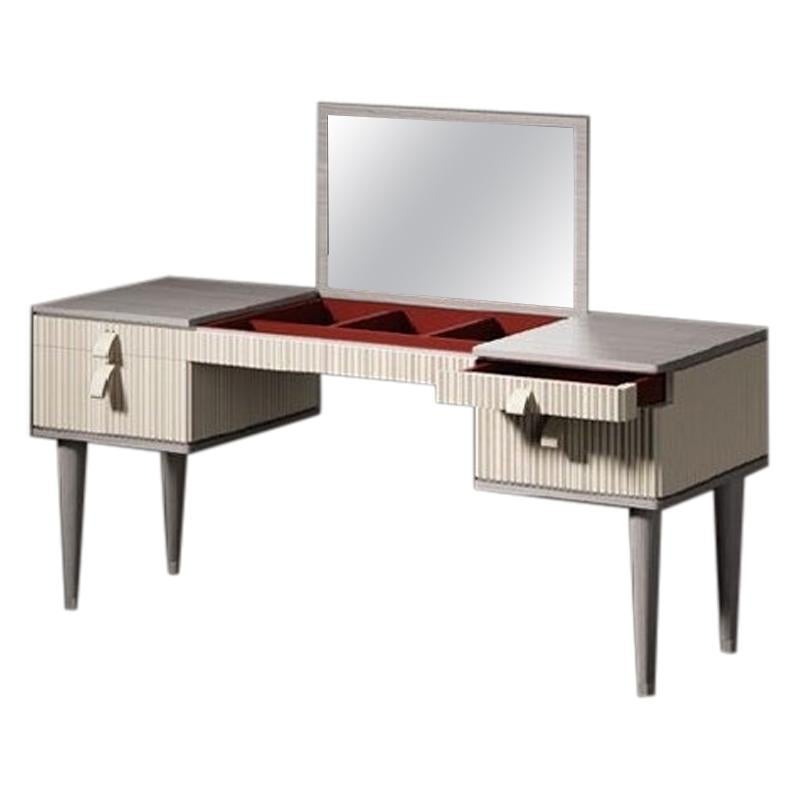 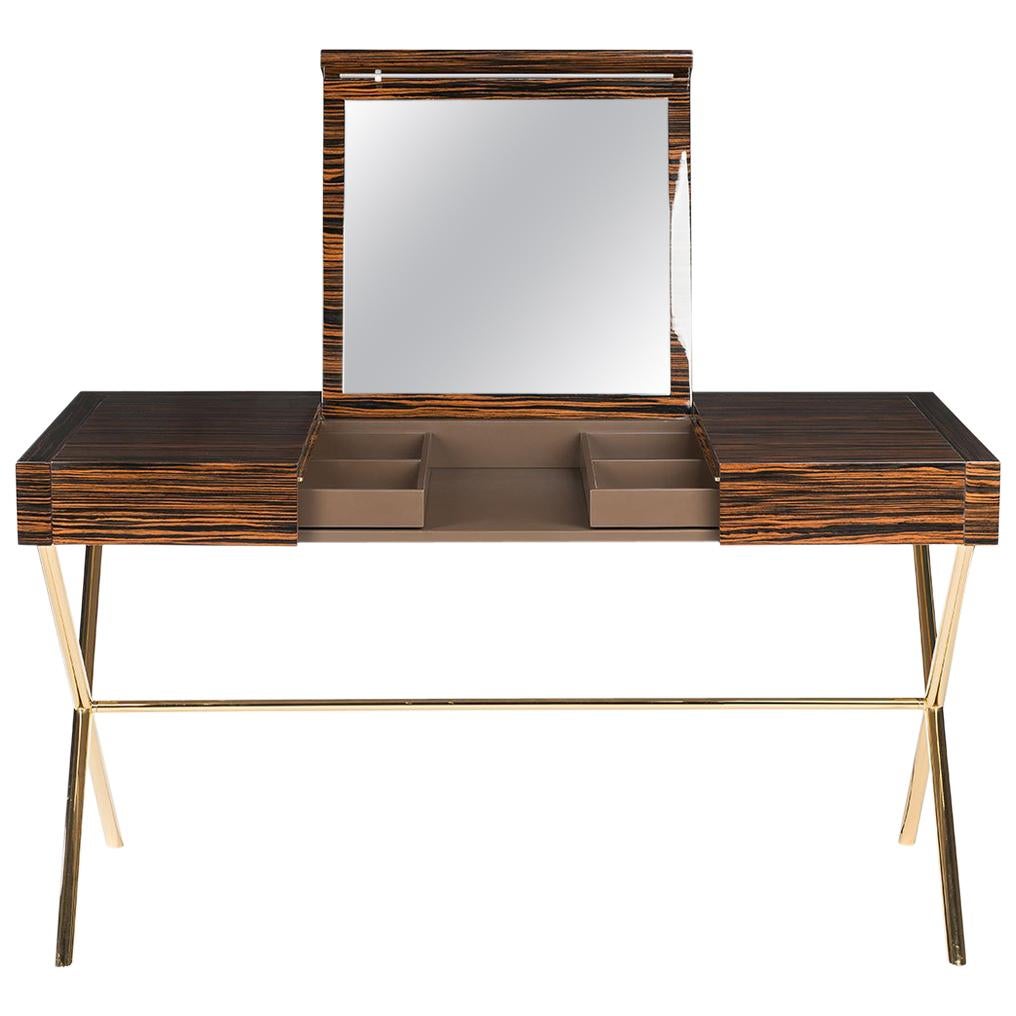 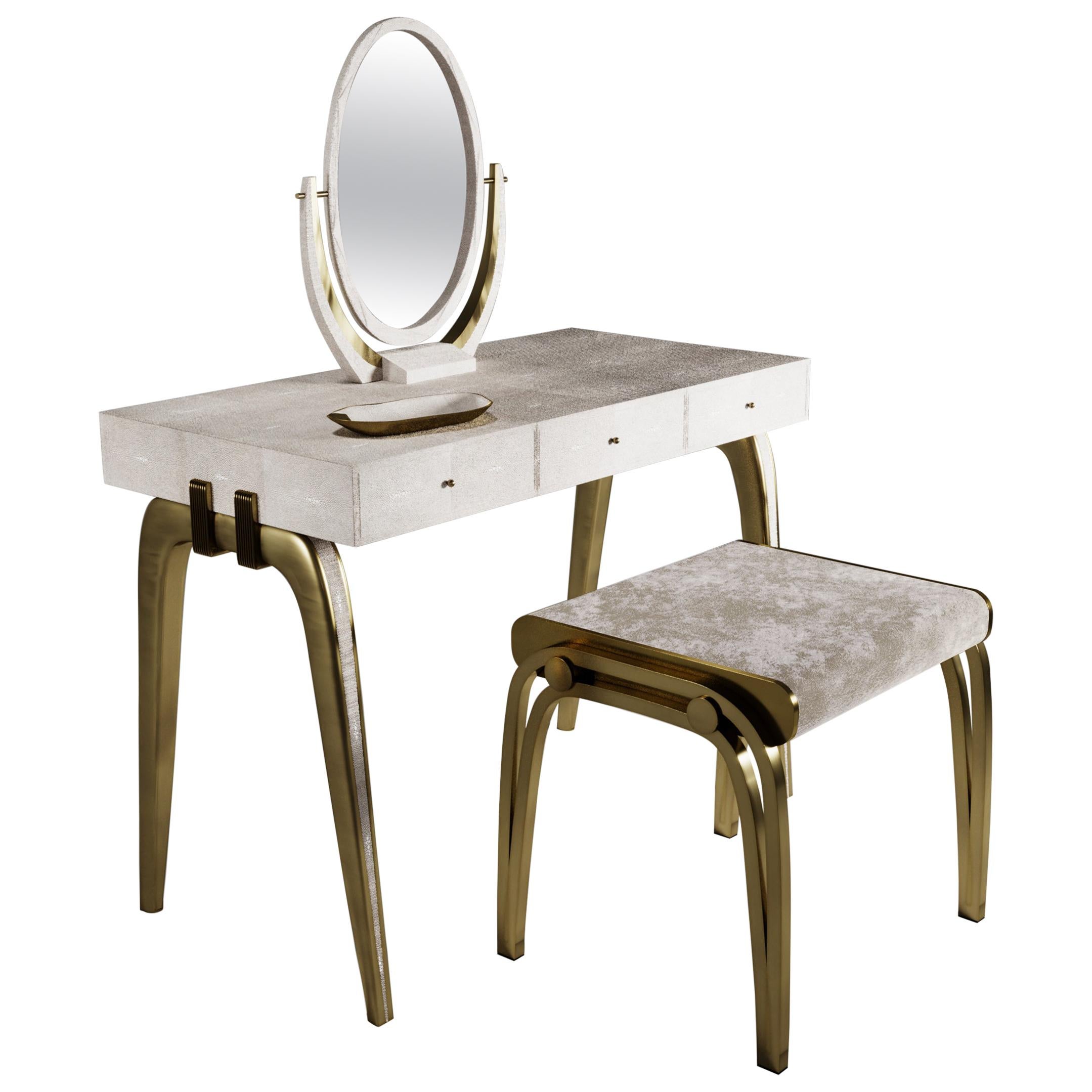 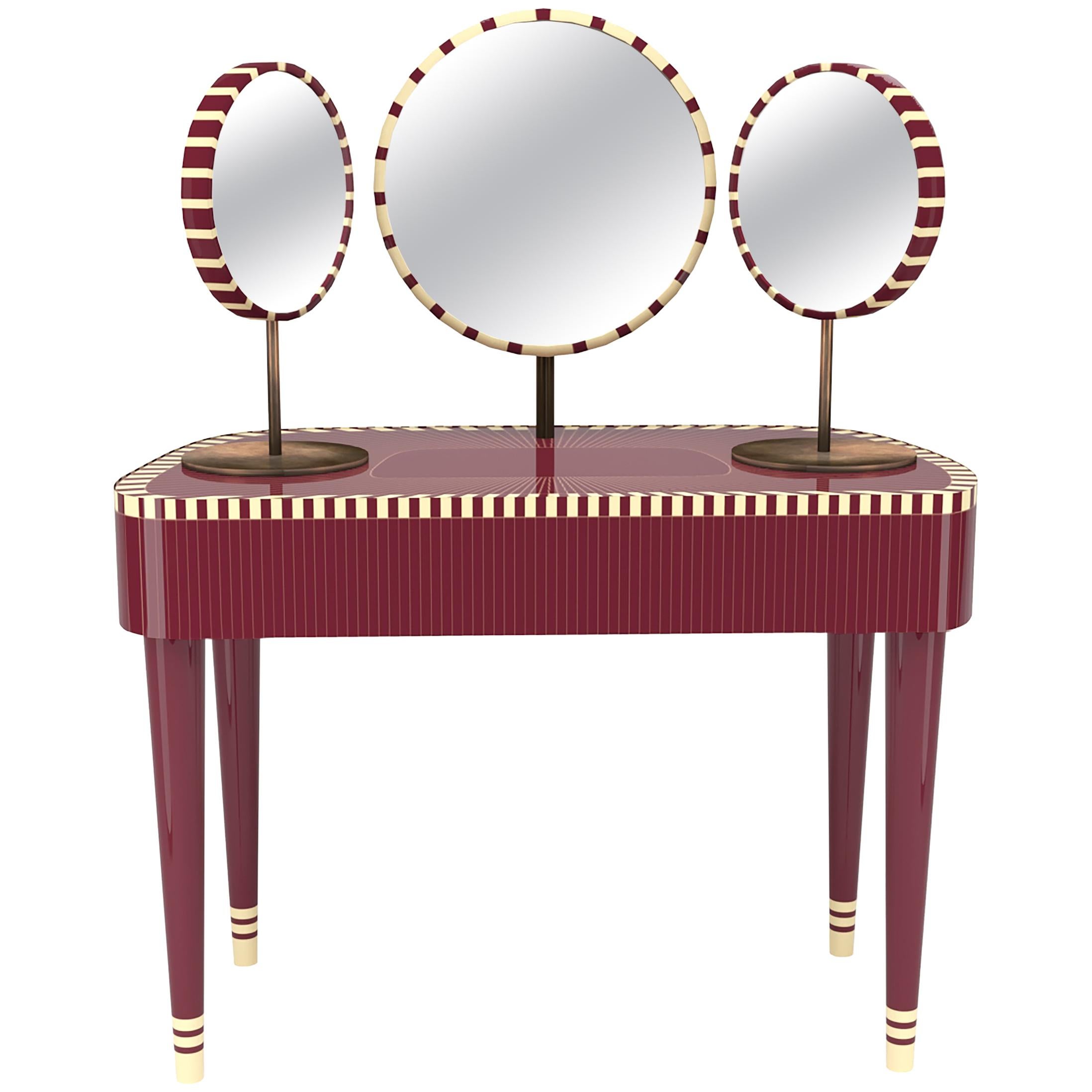 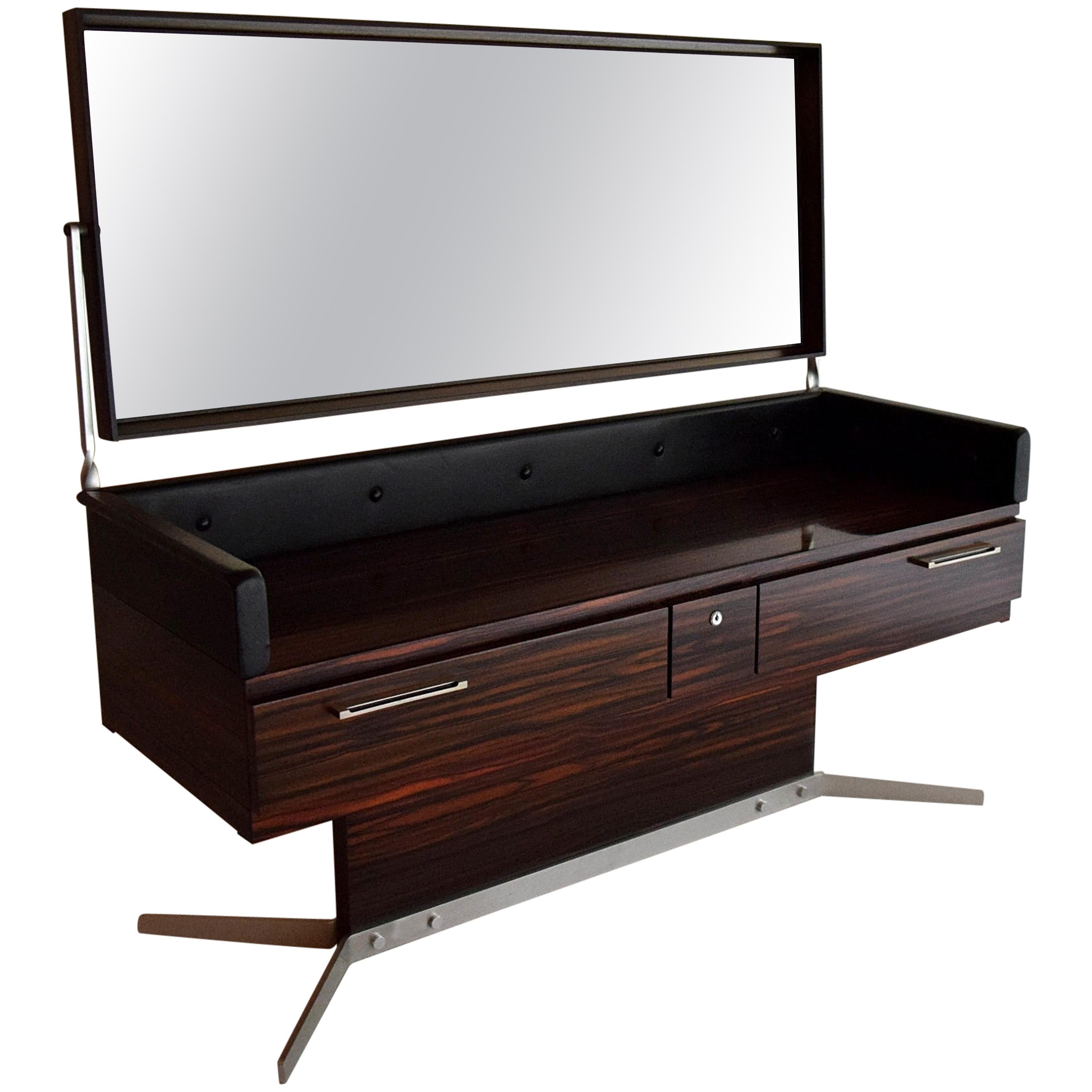 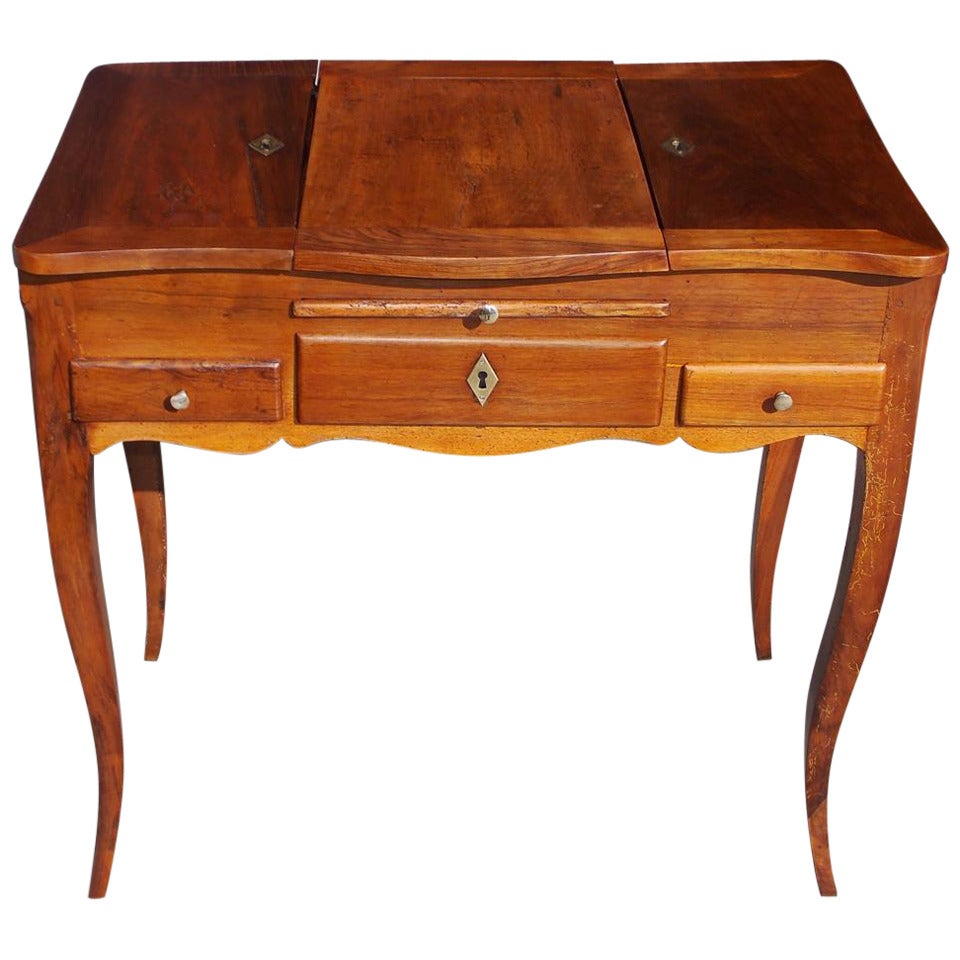 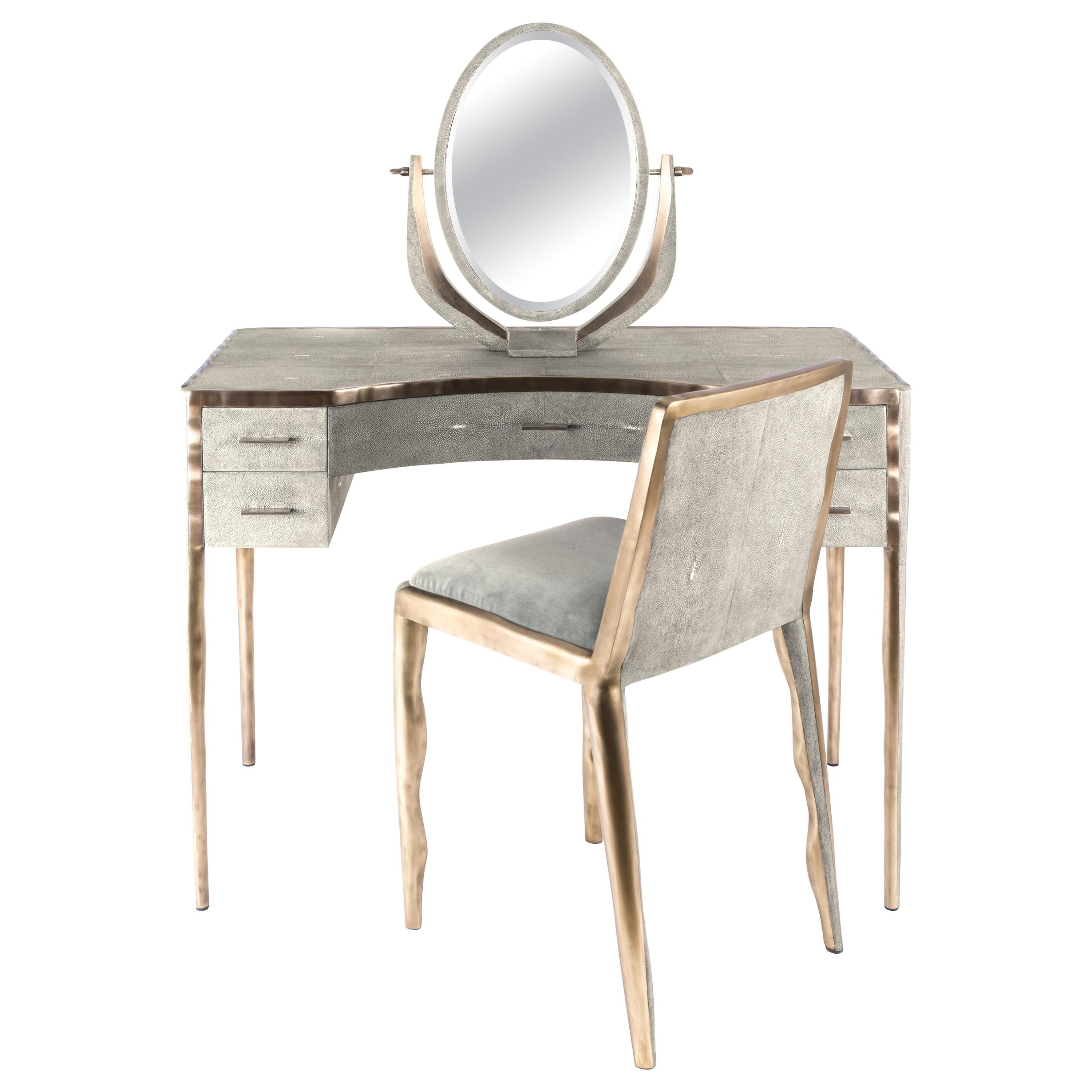 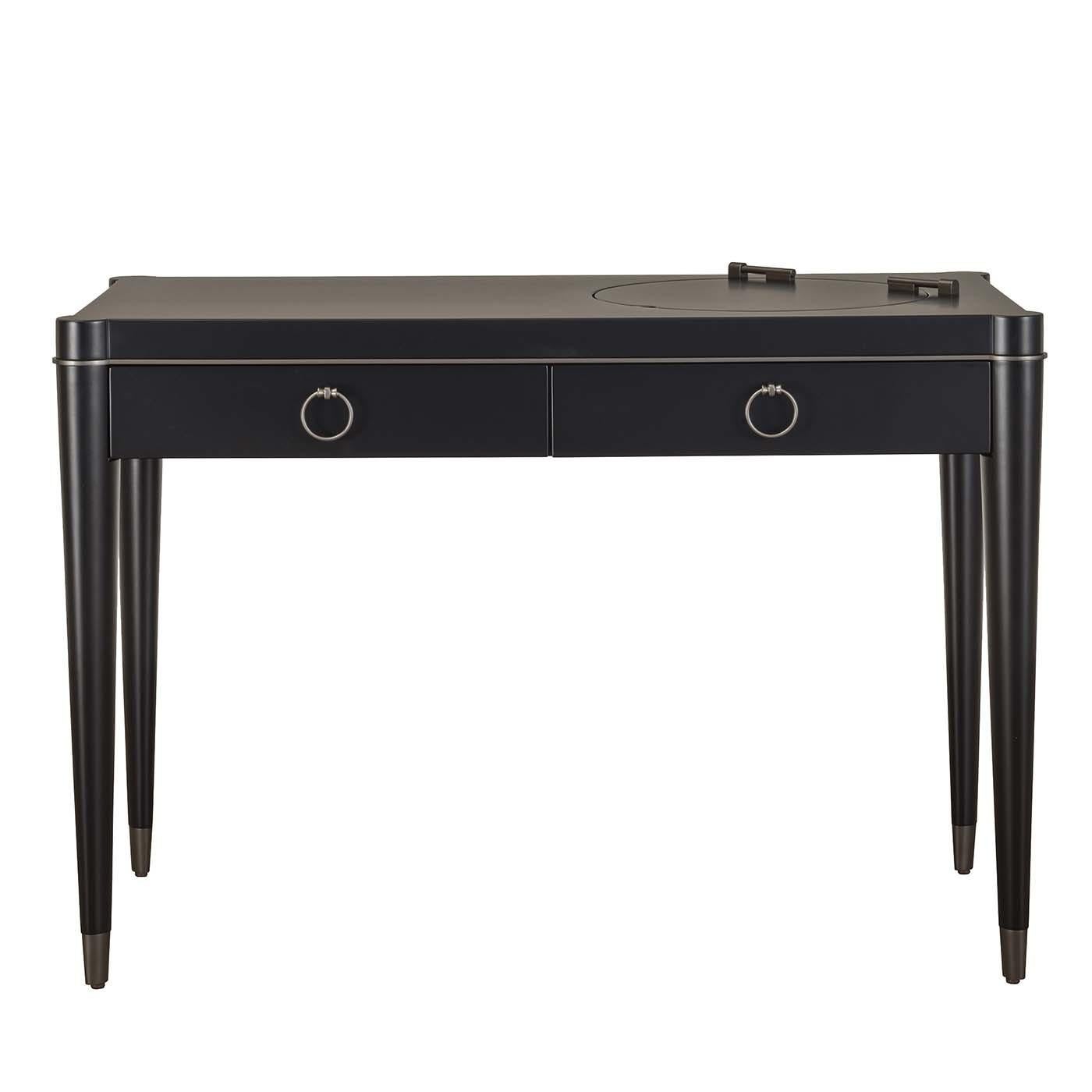 Luigi Massoni for Poltrona Frau, ‘Dilly Dally’ vanity set, steel, mirror, leatherette, fiberglass, Italy, design 1968 Outstanding Italian dressing table executed by Luigi Massoni (1930-2013) in a functional way. Both the table and the chair are equipped with casters, providing easy movement. Thereby, the matching chair can be integrated into the barrel-shaped carcass, meaning that the item itself consumes less space in the room. The top can be opened revealing a built-in round mirror and molded plastic trays with dividers for make-up and other accessories. The chair itself is provided with button cushions on the backrest and seating area. The vanity set is executed in a beautiful vibrant red color, which gives the room a lively and exciting touch. 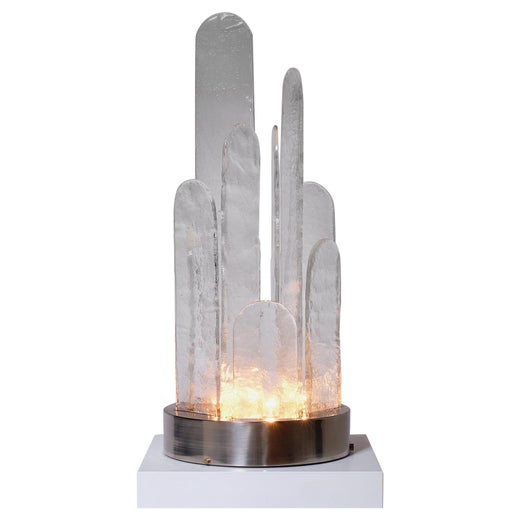 Luigi Massoni (1930–2013) was one of Italy’s most prolific designers and instrumental in the growth of the country’s design industry in the postwar years through his products, advertising campaigns and journalistic work at Italian magazines.

Born in Milan, Massoni trained at the Collettivo di Architettura in Milan and worked as an architect and designer as well as a freelance journalist and consultant. He was involved with many of Italy’s most influential brands, such as Poltrona Frau, Fratelli Guzzini and Alessi. Massoni was hired by Alessi, the legendary housewares and kitchen utensils manufacturer, which had been around since 1921, in the mid-1950s. In 1957, he collaborated with like-minded product designer Carlo Mazzeri on the universally renowned stainless-steel cocktail shaker 870, which, followed by other kitchen containers for the brand, was one of the first objects from Alessi that hadn’t been created in-house.

Together with architect Carlo De Carli, Massoni founded a magazine called Il Mobile Italiano and later Mobilia, an association of Italian furniture makers and one of the first organizations that focused on the promotion of Italian design. In the 1960s, Massoni began to design lamps and serveware for the Guzzini group, where he also consulted on design and company communications. He designed revolutionary furnishings for the kitchen at Boffi Cucine, producing modular kitchens, cabinets without traditional handles and more.

Recognized Seller
These prestigious sellers are industry leaders and represent the highest echelon for item quality and design.
Diamond Seller
These expertly vetted sellers are 1stDibs' most experienced sellers and are rated highest by our customers.
Established in 2006
1stDibs seller since 2012
3,825 sales on 1stDibs
Typical response time: 1 hour
Associations
20th Century Specialists

Italian Vanity Table with Chair in Cherry and Ash

Vanity Table in Powder Coated Wood with Integrated Bowl, Desk or Entry Table
Located in Brooklyn, NY
Inspired by melting snow and icicles, this small vanity table easily fits into the corner of most bedrooms. The shiny table surface incorporates a bowl for holding cosmetics. It can ...
Category

$4,870
Infinity Vanity Table
By Ulivi Salotti
Located in Milan, IT
This exquisite vanity table is part of the Infinity series and is made entirely in walnut wood. The top curves on both sides to create the feet supporting it, adding a gentle roundne...
Category