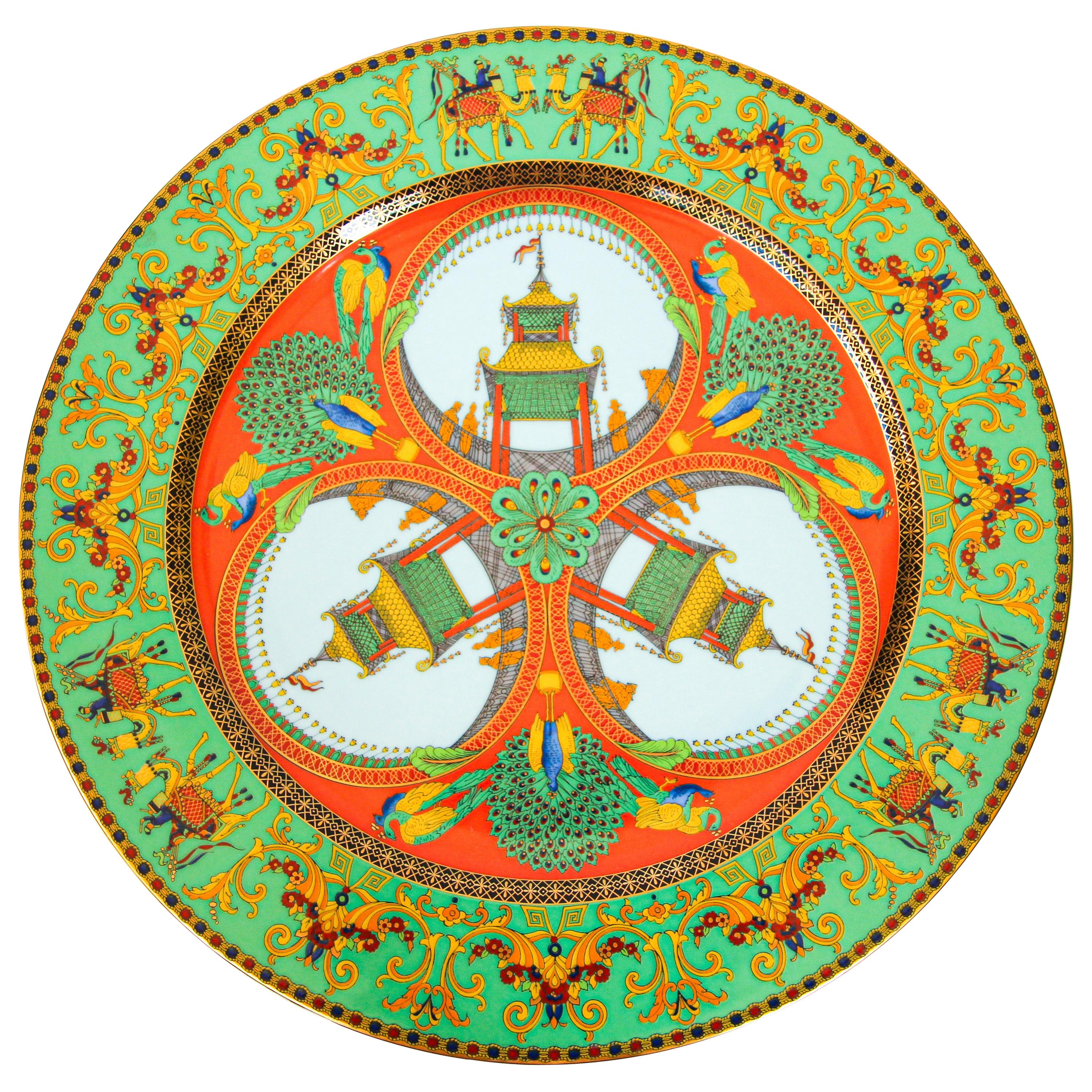 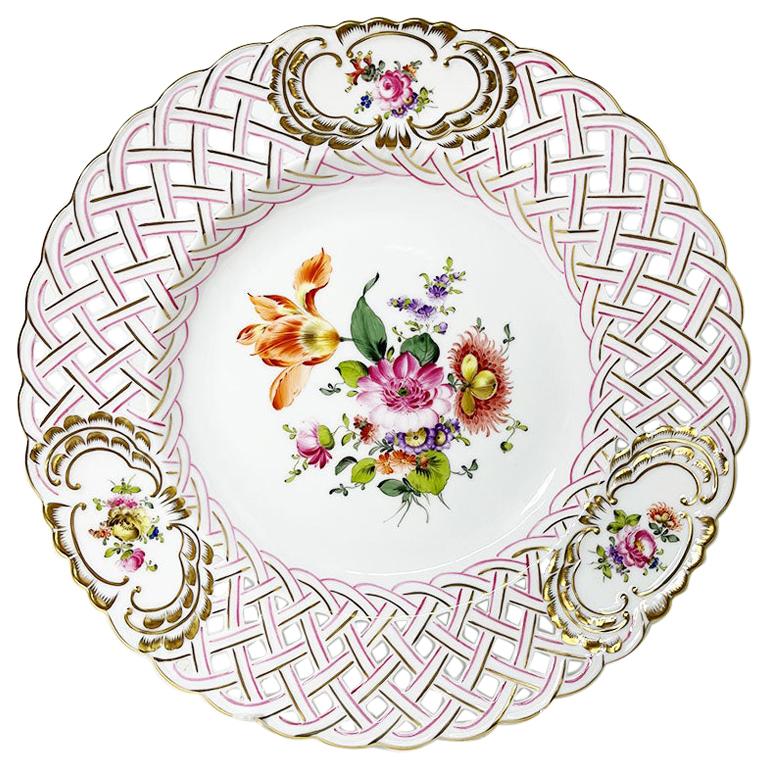 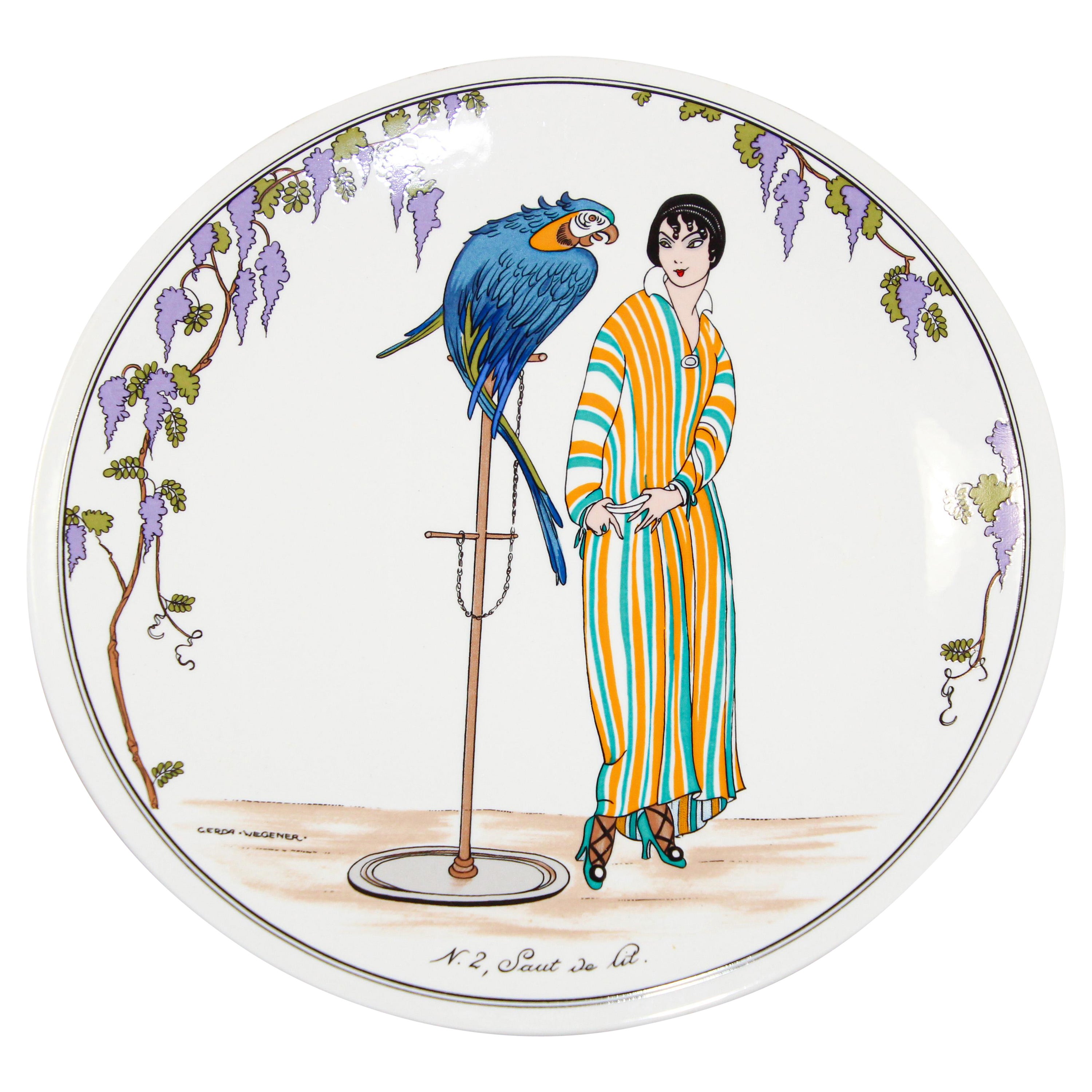 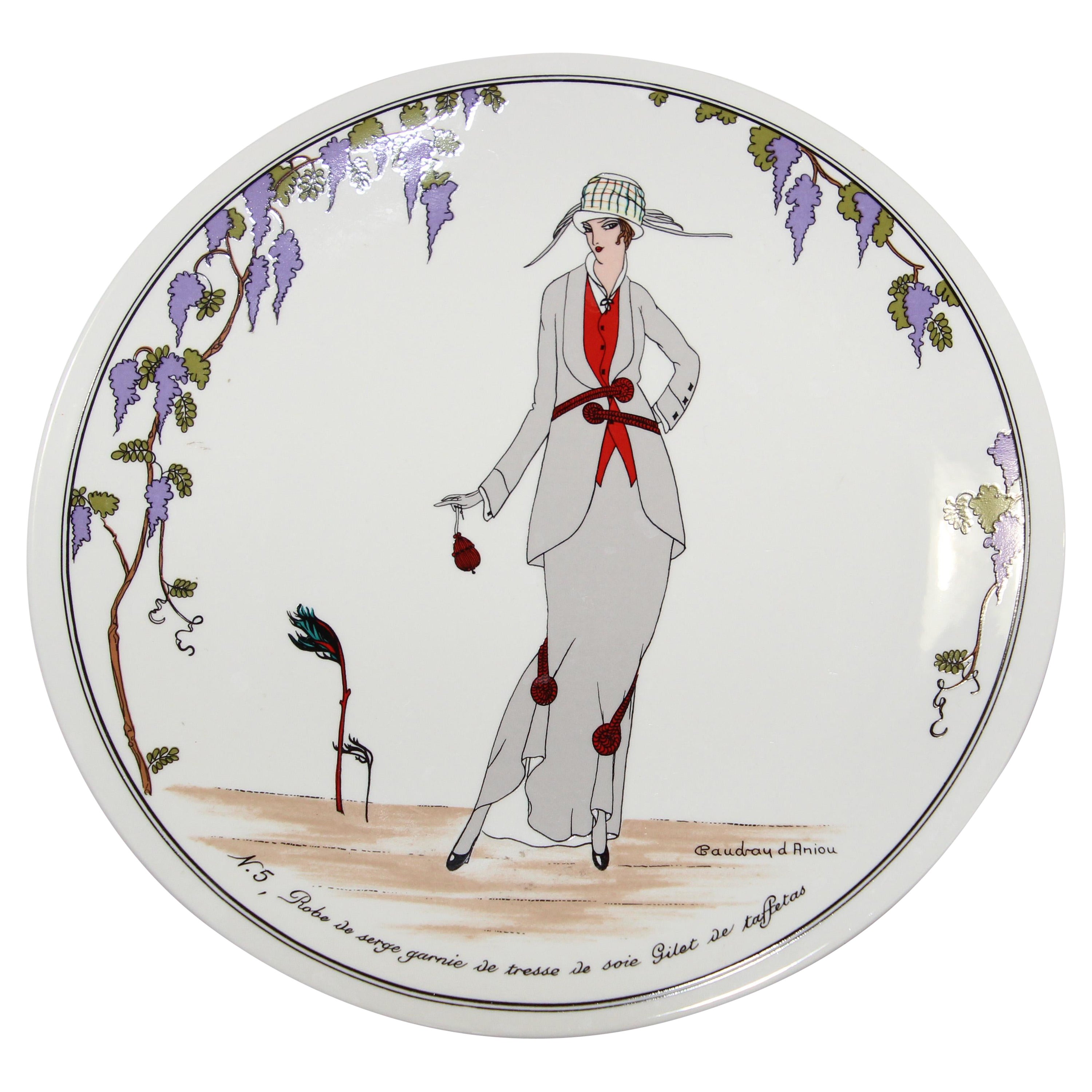 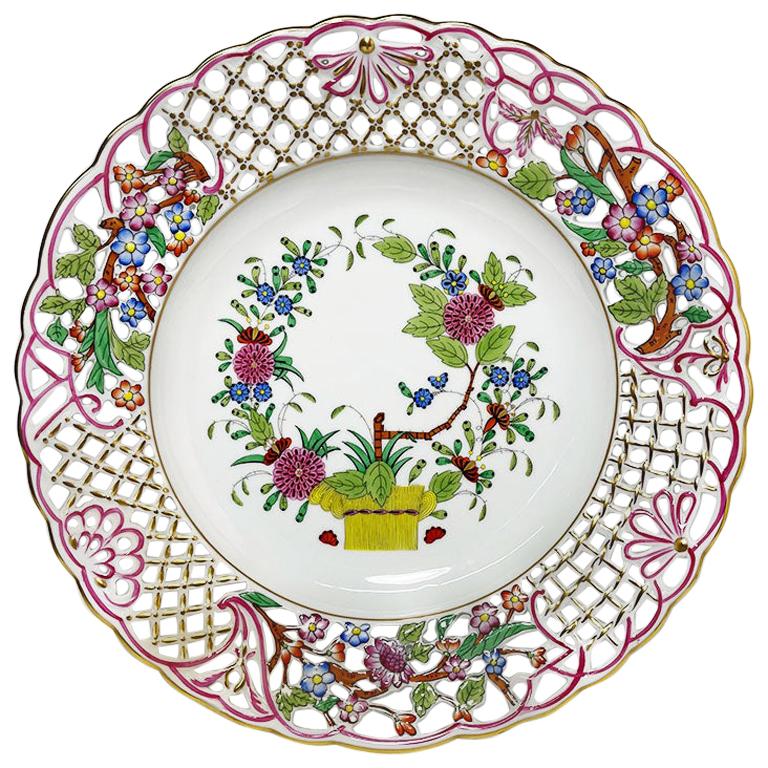 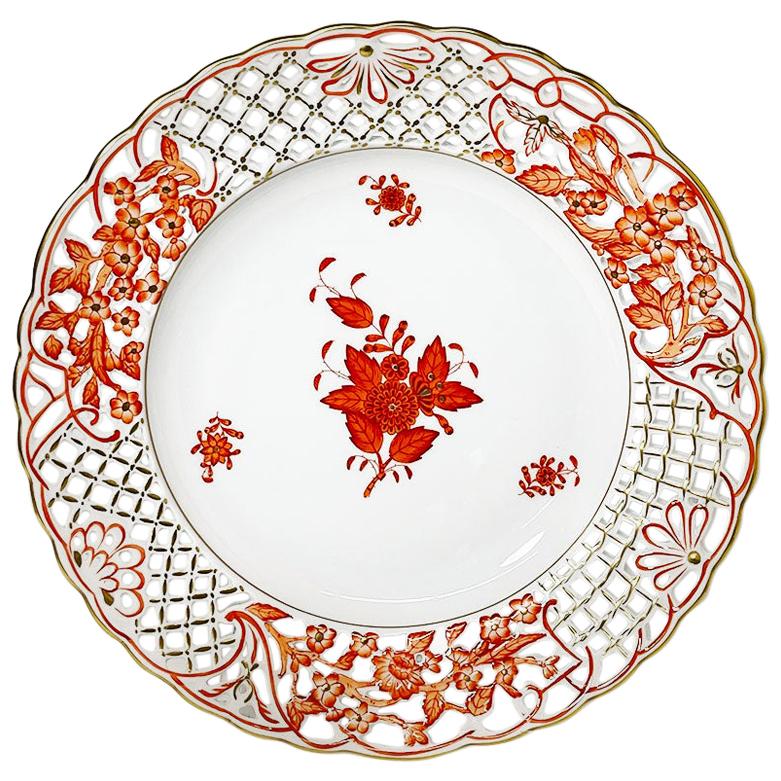 This is a Rosenthal porcelain designed by Versace, “Floralia Gold”, bread and butter/wall decor plate. It is hand painted black in the background with a bright yellow Ikarus flower in the center. The flower is surrounded by a gilt yellow garland of scrolls and flowers of the same color. After this, there is a wreath of scrolls of acanthus leaves, then a double”V”pattern band followed by another garland of acanthus leaves/scrolls. Finally a gilt and yellow Greek key pattern, also adorned the trim followed by the same garland of acanthus leaves and scrolls plus a gilt/yellow band. Below the plate, it is found the Rosenthal and Versace hallmarks. 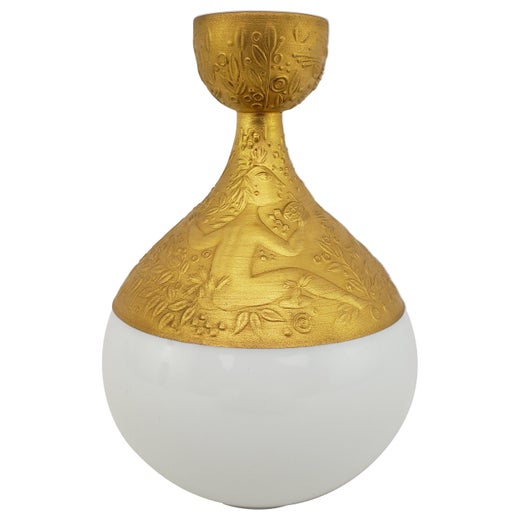 While the Rosenthal Porcelain Factory grew from humble decorating roots — as many pottery companies do — it eventually built a list of universally revered designer and artist partners that included Andy Warhol and Salvador Dalí. And after securing an enviable position as a top manufacturer of serveware and dominating the porcelain and bone china markets, Rosenthal expanded into furniture production, working with influential designers Verner Panton, Luigi Colani and Günther Ferdinand Ris and Herbert Selldorf.

Dinnerware, though, would be a Rosenthal mainstay. Between 1904 and 1910, Rosenthal produced its renowned dinnerware lines such as Donatello, Darmstadt and Isolde. These were introduced as unornamented white pieces — only later were they given their underglaze designs.

Rosenthal founder Philipp, a Catholic of Jewish ancestry, resigned in 1934 as the company’s president due to pressures owing to discriminatory German laws that took shape during the rise of the Nazi regime. Rosenthal died in 1937, and the family fled to America. The company would not regain its footing until 1950 when Rosenthal’s son, Philip, joined the firm and, in 1958, became chairman and dubbed Germany’s “China King.” At its peak, the company had 10,000 employees.

In the 1950s, Rosenthal’s modernist dinnerware was a significant part of the brand’s offerings, and by 1961 they introduced the famed Rosenthal Studio Line. Although furniture designers and ceramicists would lead the list of individuals working with Rosenthal — among them Tapio Wirkkala, Max Weber and Lisa Larson — the company eventually reached out to fine artists, not only Dalí and Warhol but Sandro Chia and Kenny Scharf. Rosenthal also collaborated with fashion designers Gianni Versace and Donatella Versace.

In a daring move in 1972, the company diversified into furniture, collaborating with some of the giants of mid-century modern design. The revolutionary Sunball chair, an icon of Space Age seating crafted by Selldorf and Ris, was among Rosenthal’s stellar successes in this venture.

About the Seller
5.0
Located in Guaynabo, Puerto Rico
Platinum Seller
These expertly vetted sellers are 1stDibs' most experienced sellers and are rated highest by our customers.
Established in 2011
1stDibs seller since 2020
163 sales on 1stDibs
Typical response time: 1 hour
More From This Seller