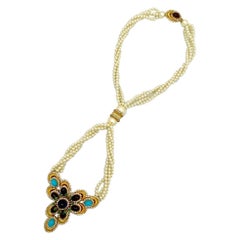 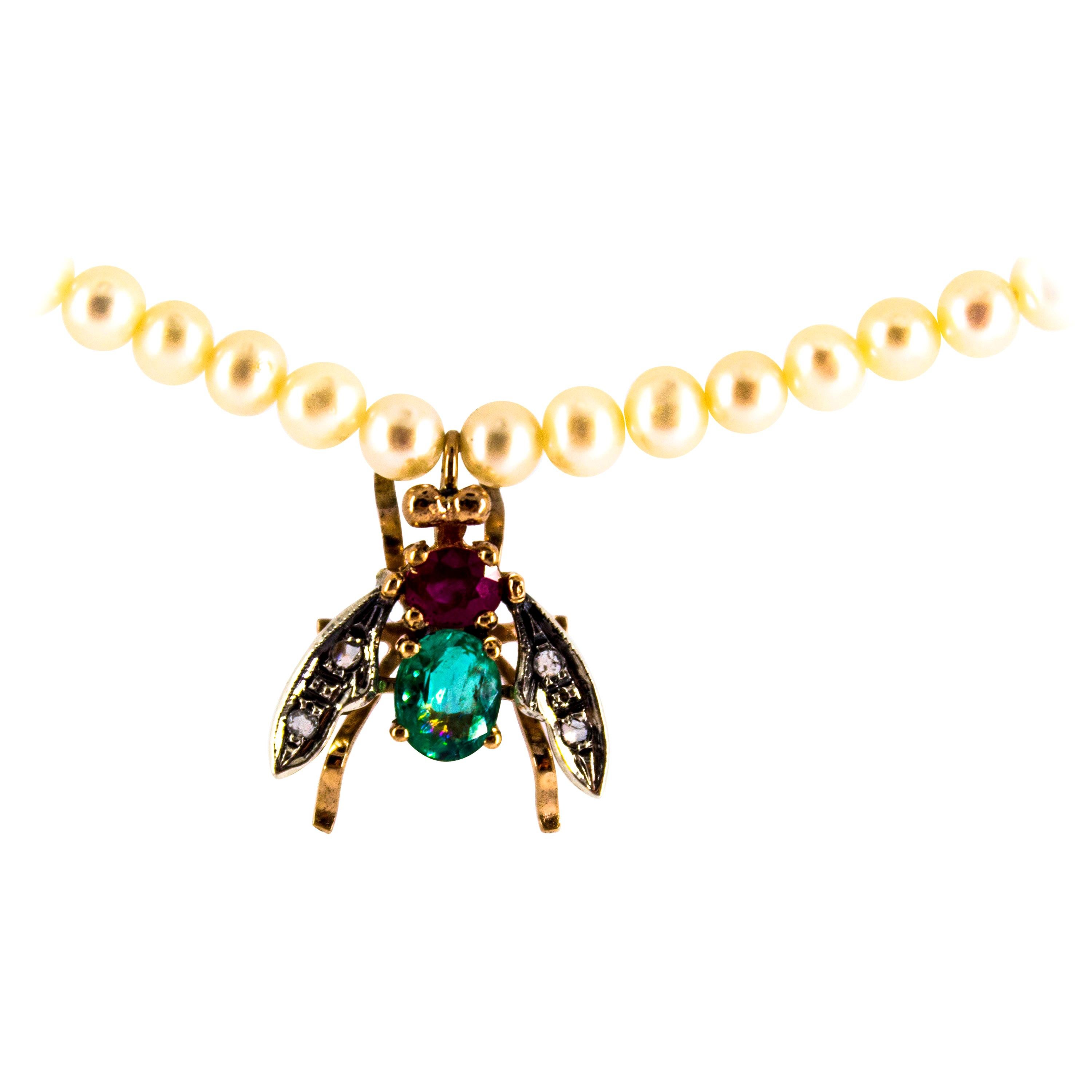 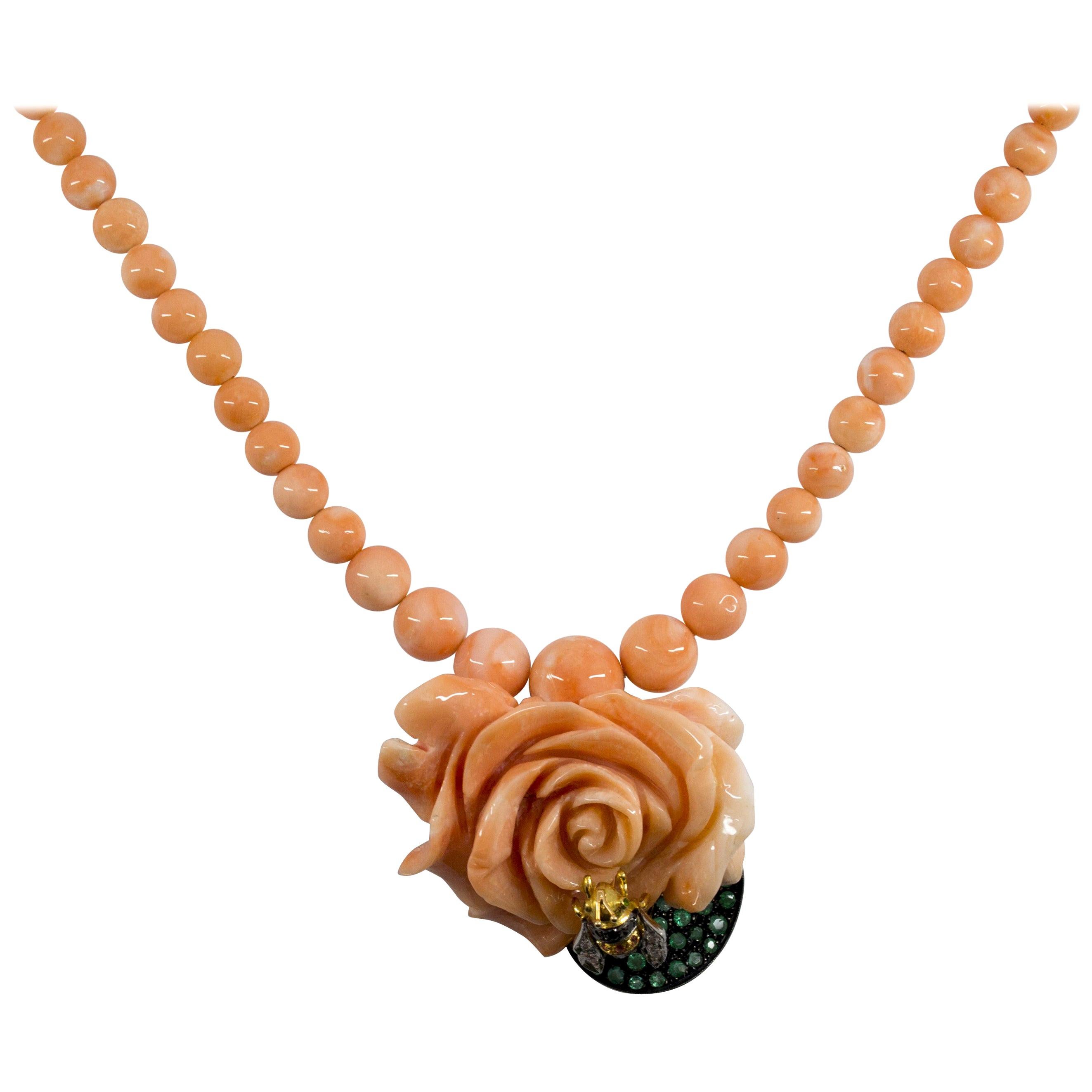 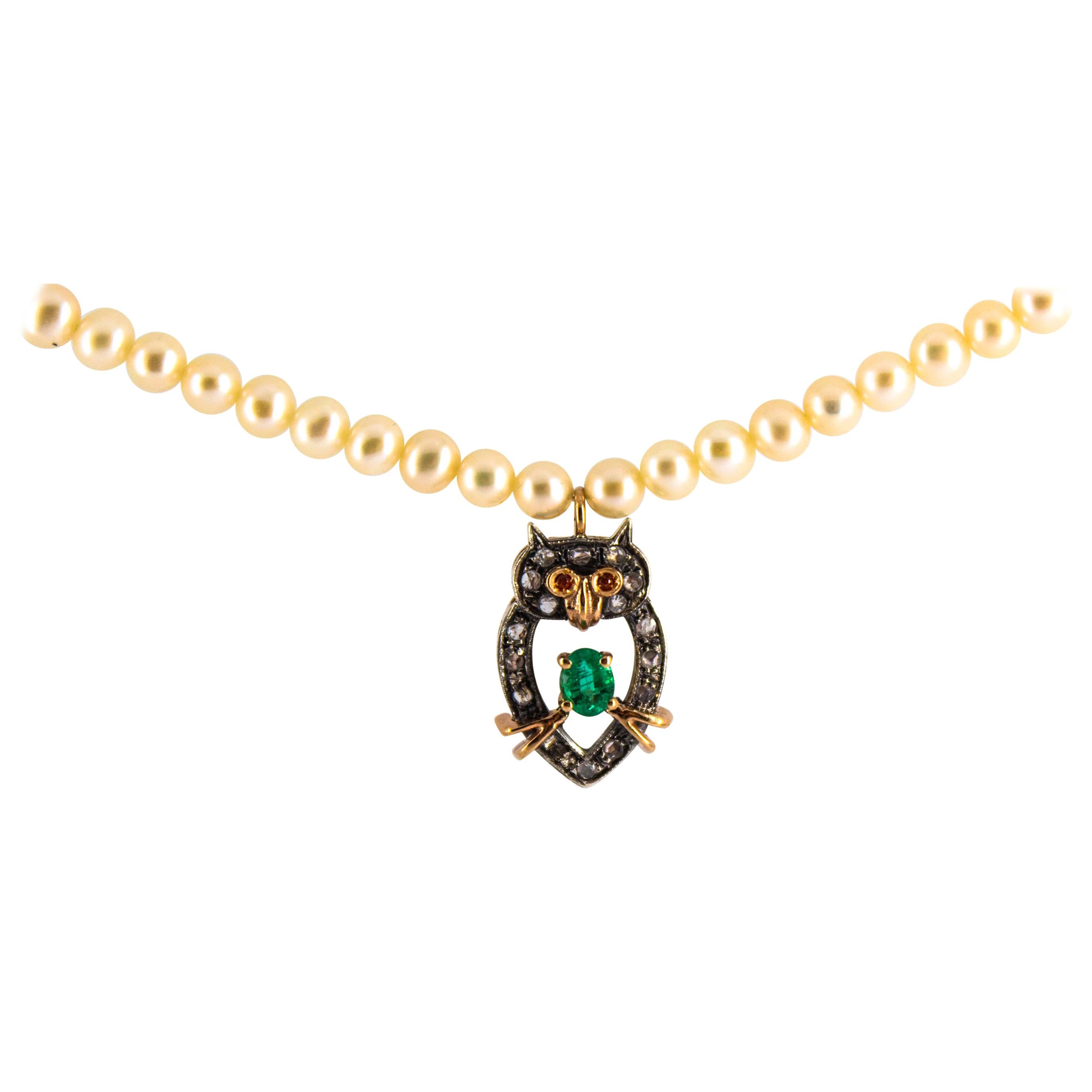 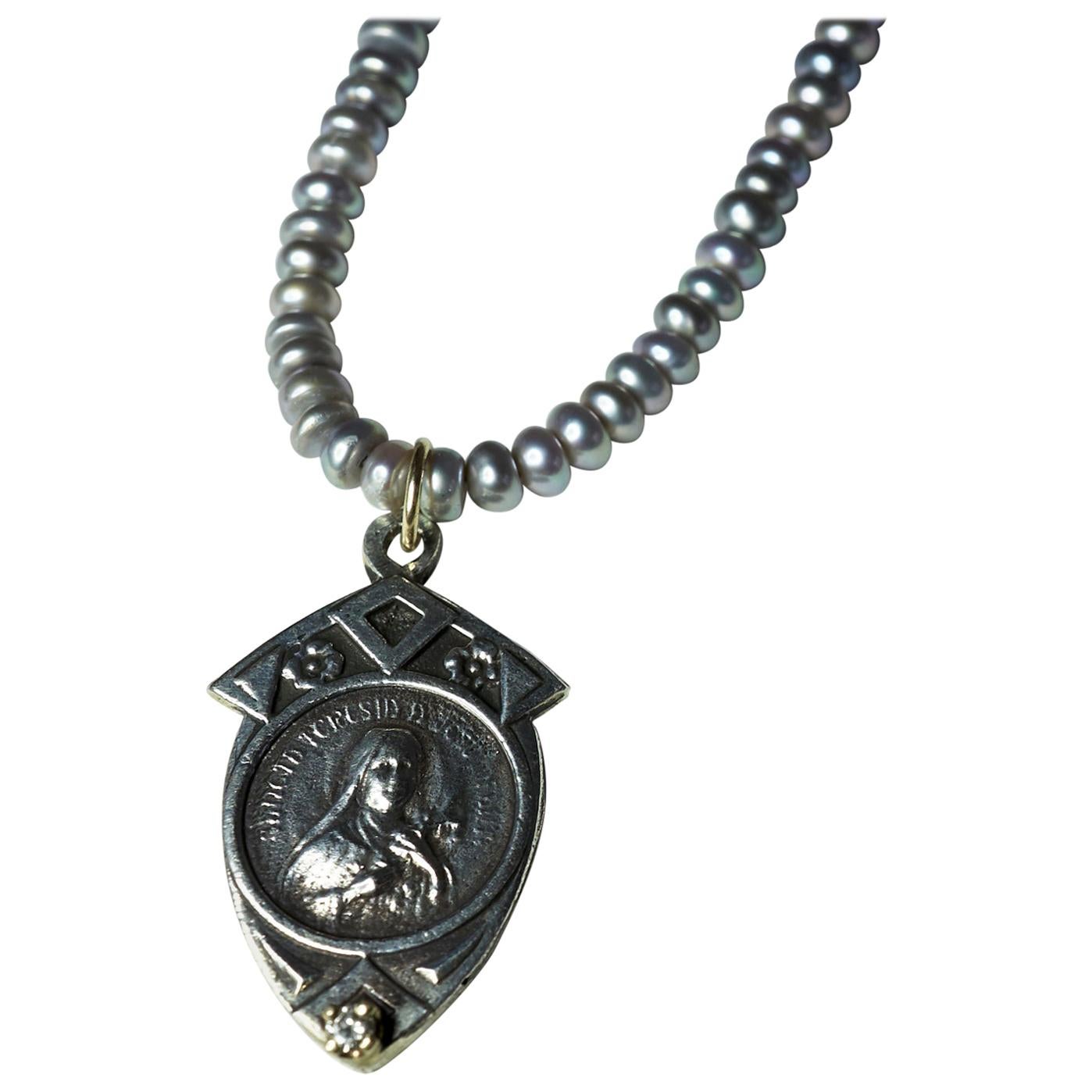 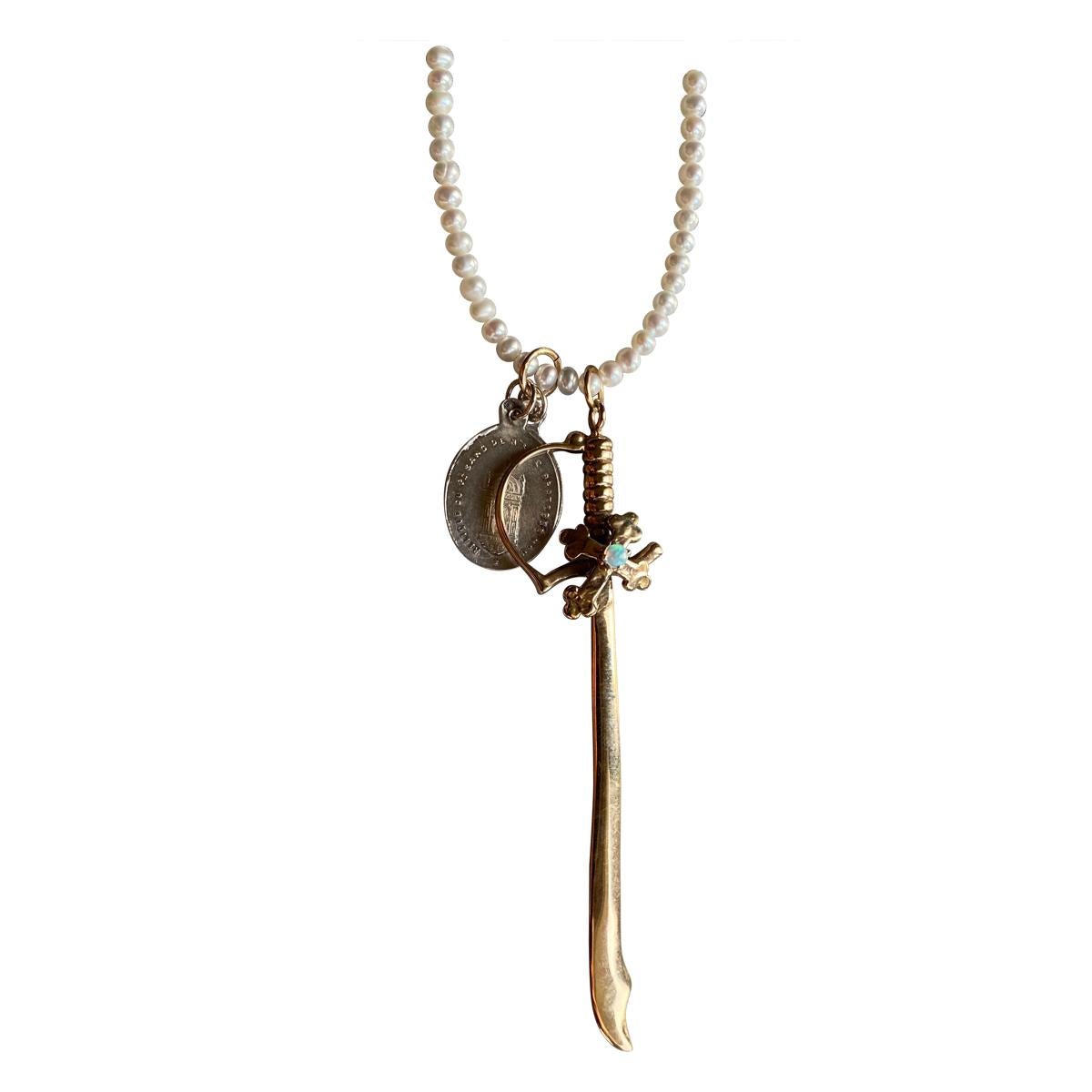 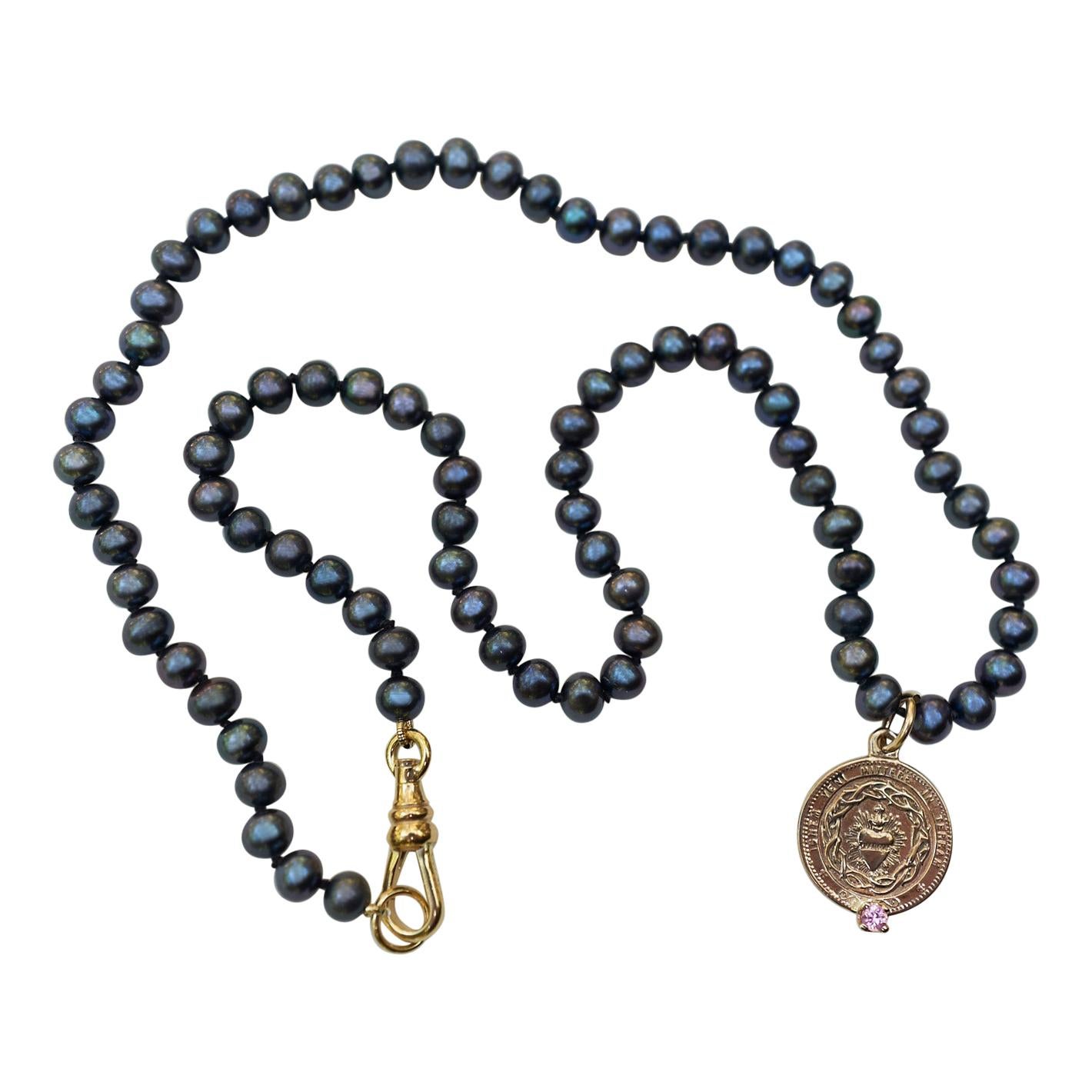 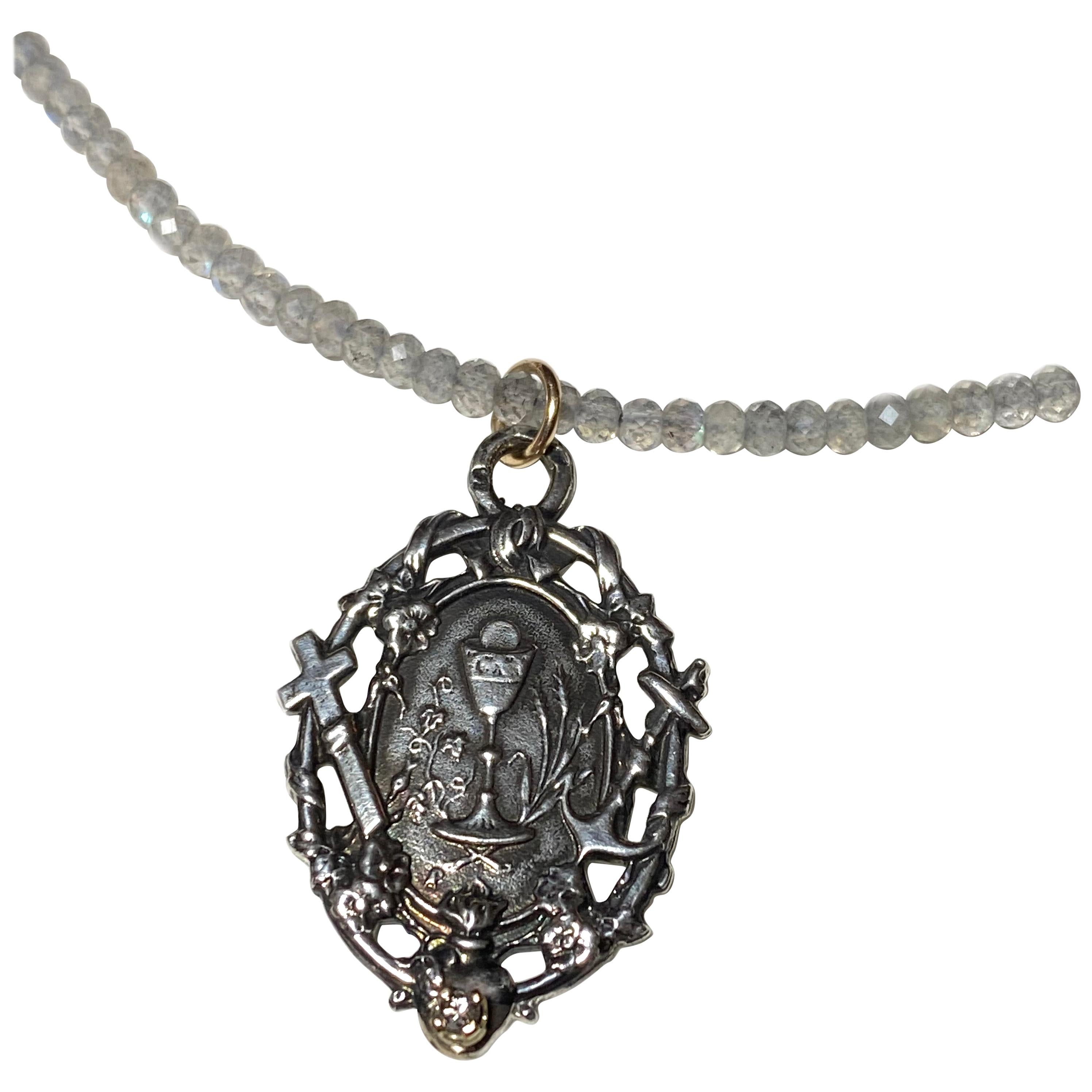 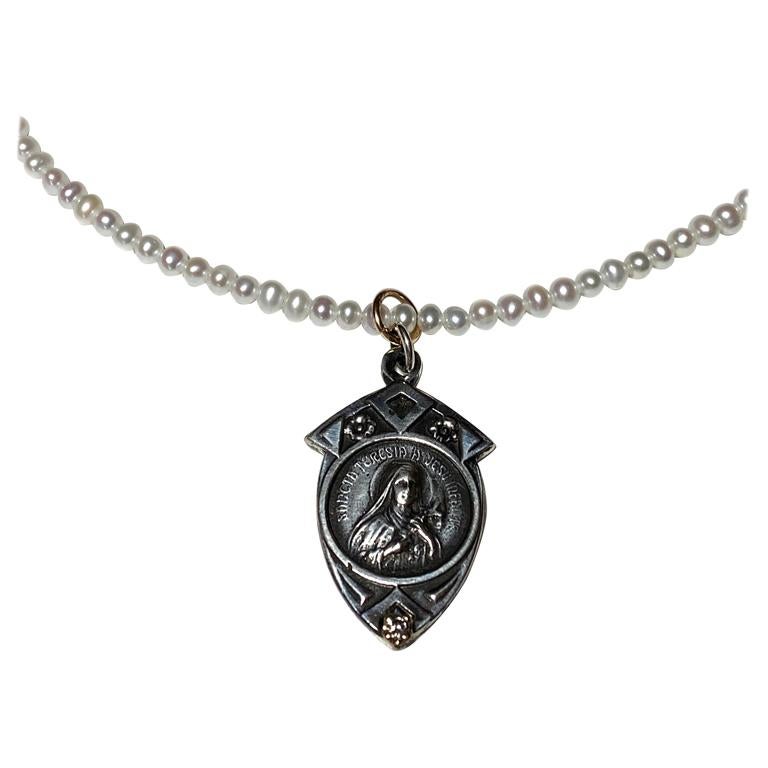 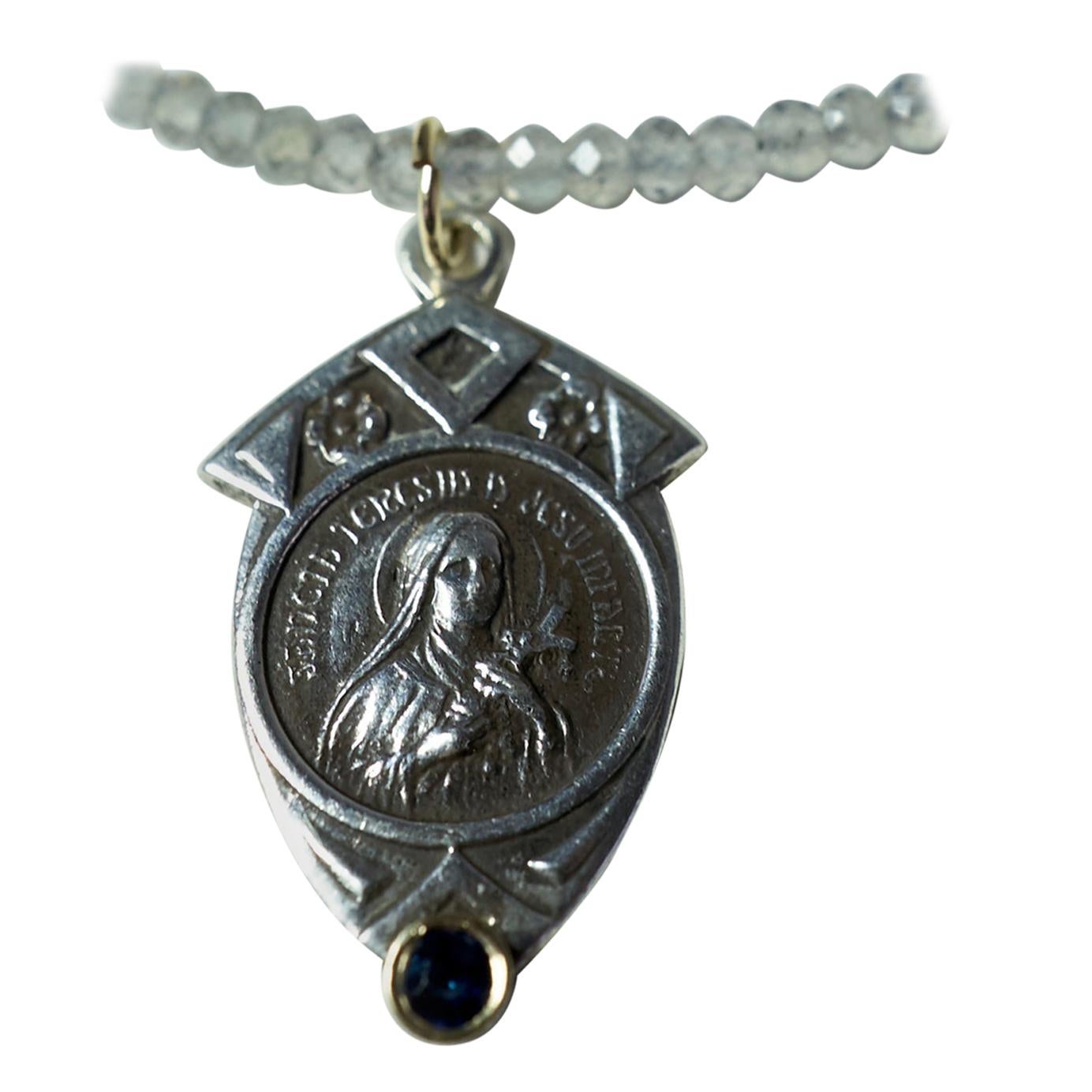 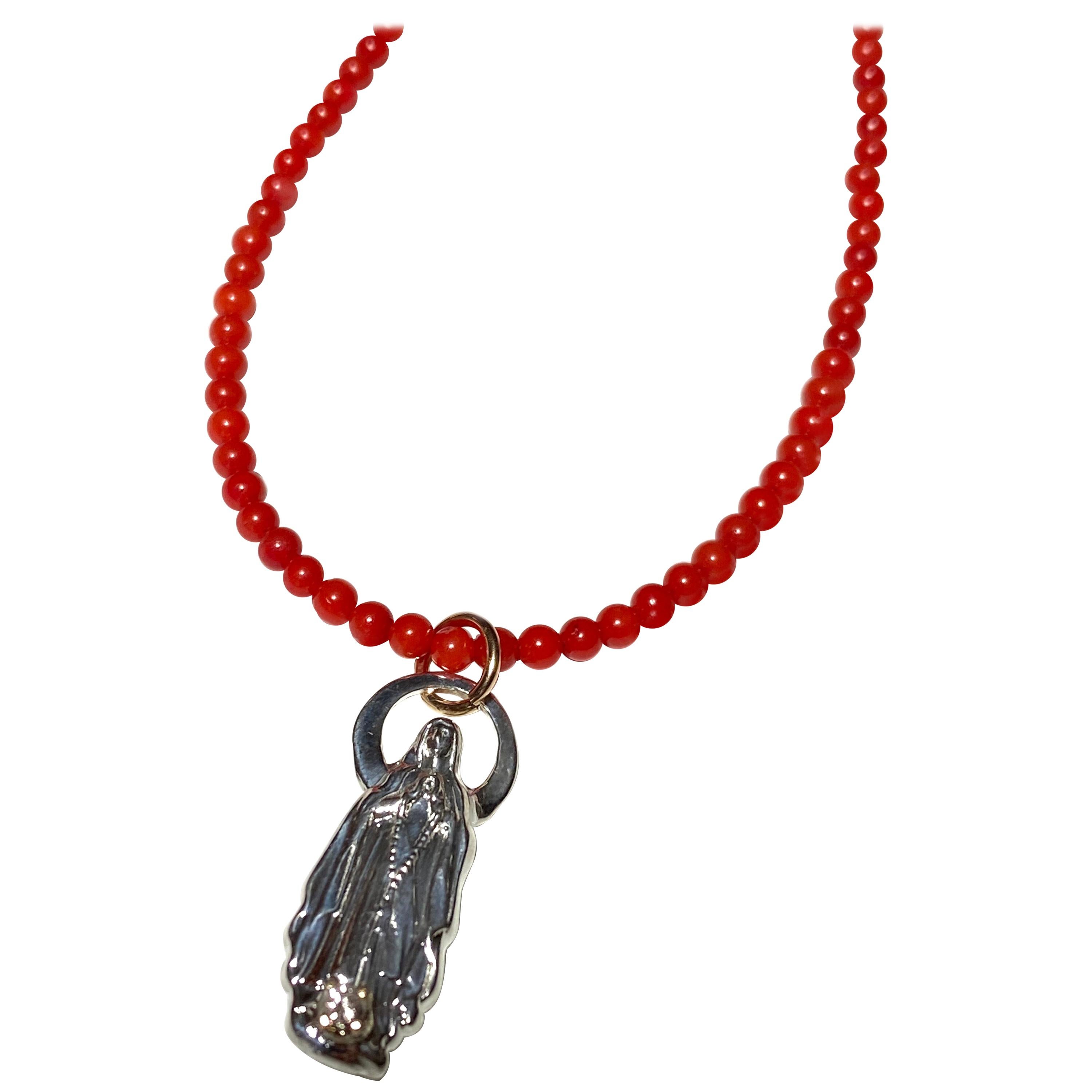 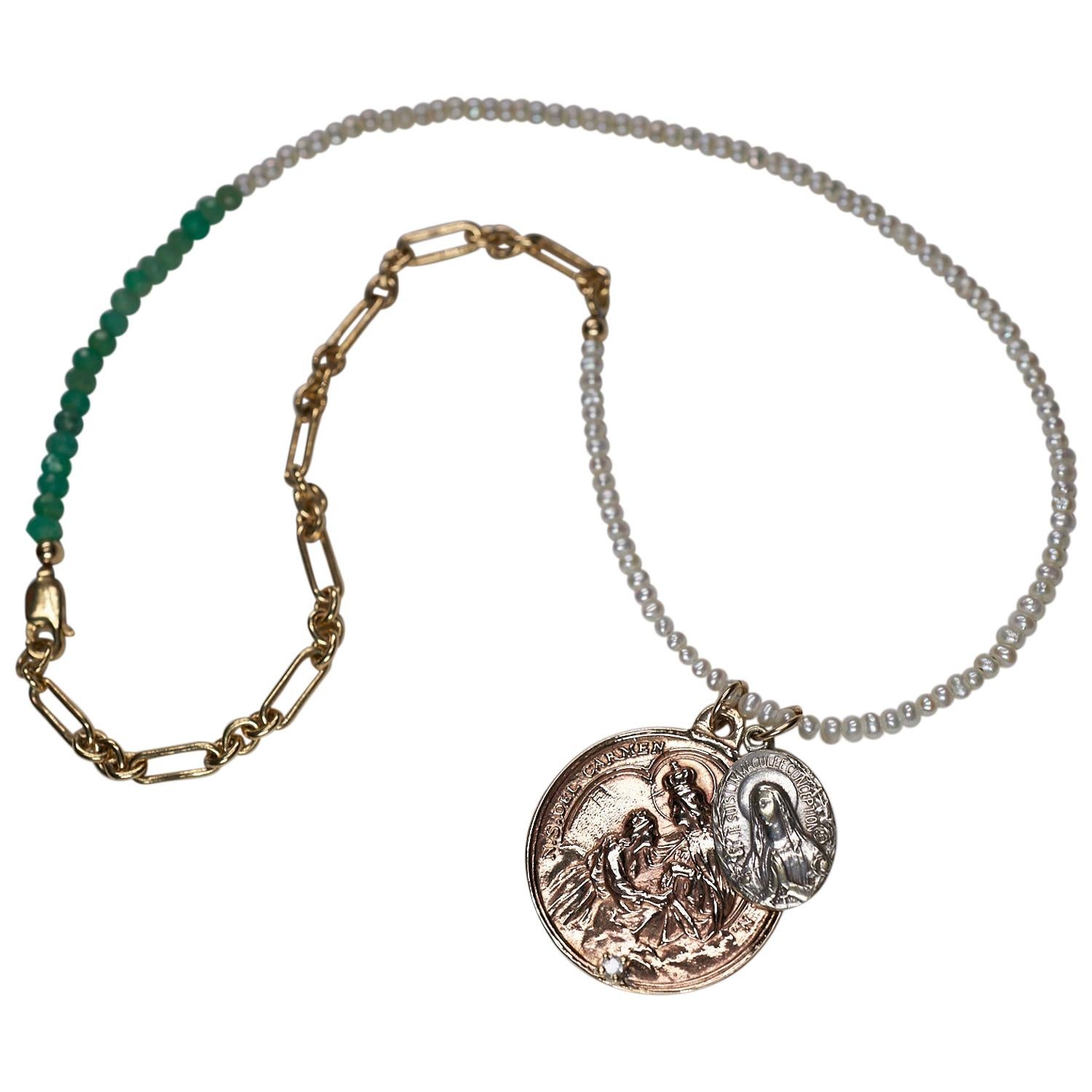 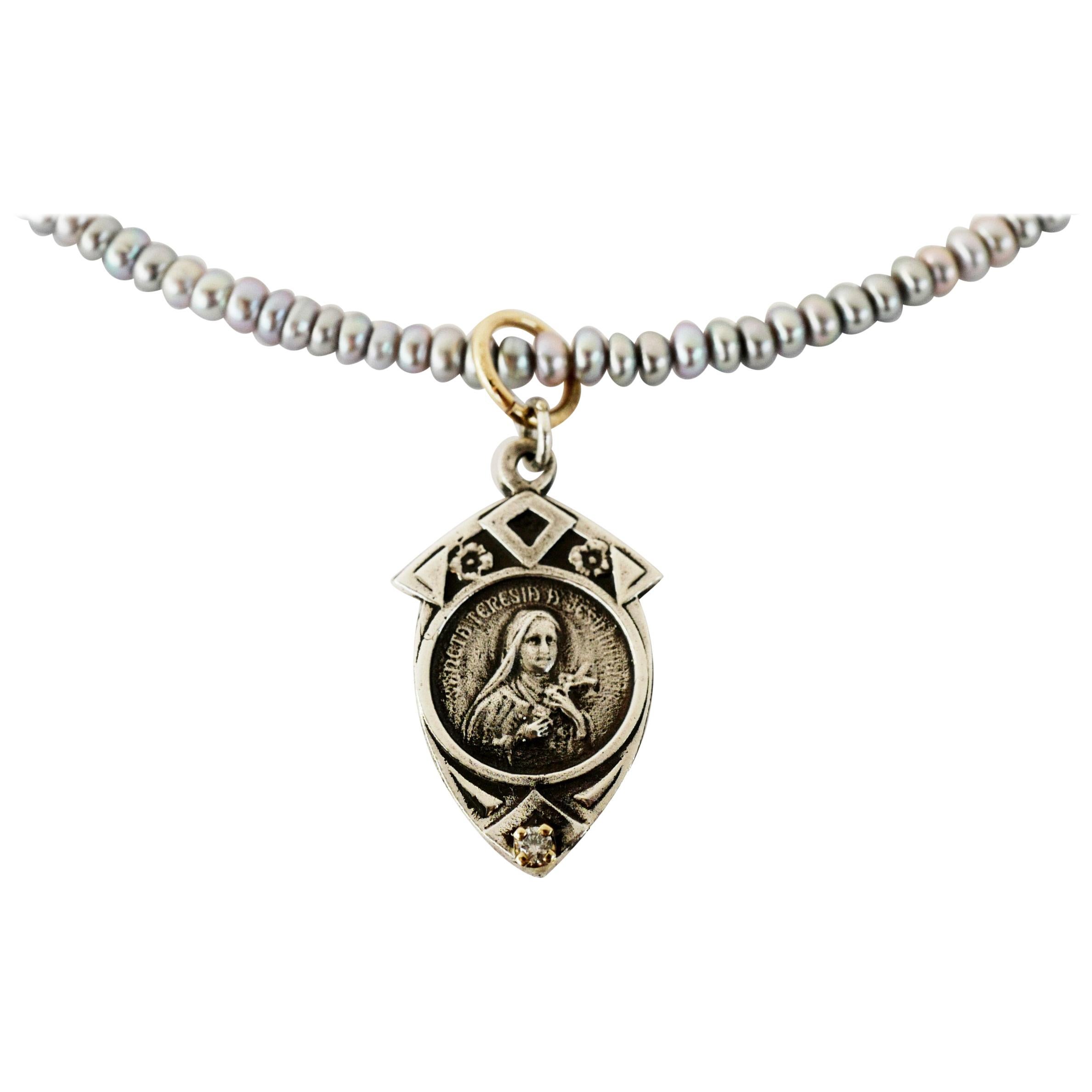 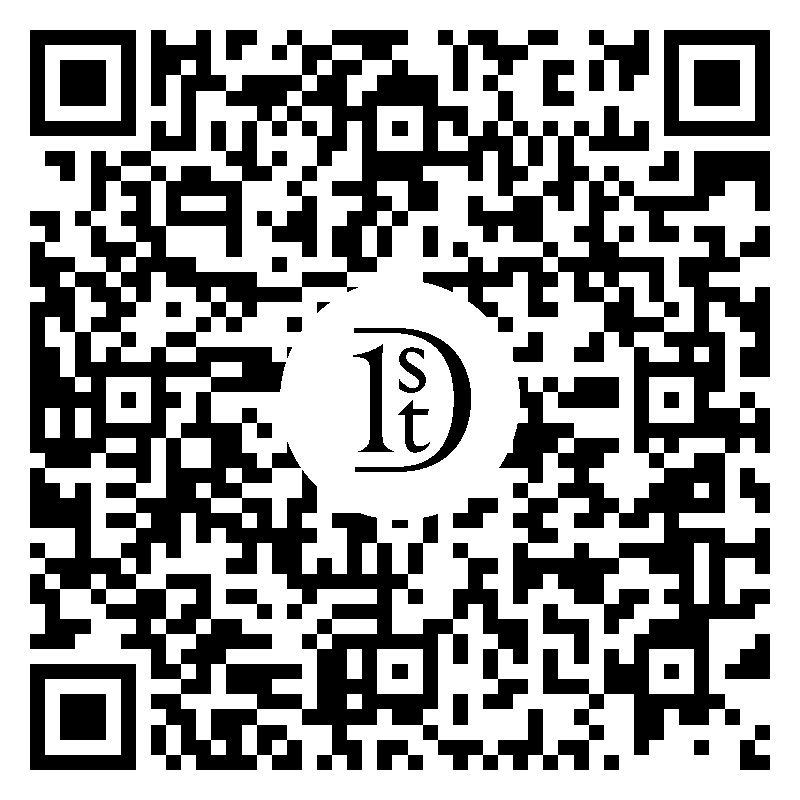 A beautiful, rare and opulent William DeLillo necklace from the early 1970s. It is comprised of four strands of faux pearls worn twisted or not around the neck. They meet at the bottom at a group of two faux pearl and rhinestone set fluted gold bead. Suspended from this ornamental group of three beads are two more strands of twisted faux pearls and a large triangular 4 inch wide pendant. The pendant is made up of ribbed oval gold pieces soldered together and set with rhinestones on the edges. Each point of the triangular back plate is mounted with a smaller oval gold oval piece with rhinestone edges and set with an oval glass turquoise cabochon. The center of the pendant is mounted with five oval ribbed gold pieces with rhinestone edges and mounted with a purple glass oval cabochon. On top of these five mounted purple cabochons is a central gold piece with star border. The center is set with a large round blue glass cabochon. The small stars are stars set with small green glass cabochons. The back of the has a cut out lace work piece. Always keeping in mind the details of design, DeLillo used the same matching larger oval piece mounted with an oval glass cabochon for the push pin clasp. On the back of the claps is an oval cartouche inscribed Wm for William on the top and deLillo along the bottom. The necklace is in extremely good to excellent condition and does not look like it was ever worn. The top of the necklace laid flat measures 20 inches in length including the clasp. The drop from the top large pear of the middle ornament to the bottom of the pendant is 10 inches Belgian born designer William De Lillo started his career working for reputable fine jewelry houses such as; Cartier, Harry Winston and Miriam Haskell. before branching out on his own with the help of Robert F. Clark (head designer for Miriam Haskell) forming William De Lillo Ltd. In New York City in 1968. The unique bold aspect of DeLillo’s pieces attracted the attention of not only celebrities like Elizabeth Taylor, but also American and French fashion houses with whom he later collaborated. For example, for Adolfo he created exaggerated layered pearl necklaces with tassel finishes. King Tut’s exhibition was a phenomenon is the early 1970’s providing De Lillo with inspiration in creating avant-garde, geometric and tubular encrusted jeweled collars for Bill Blass. New York City’s fast paced lifestyle caused the designing duo to make a move to a chateau in the South of France. This was not the end, but the peak of their careers. In Paris, they collaborated with the house of Chanel, Nina Ricci, Schiaparelli and Yves Saint Laurent. The impeccable craftsmanship, materials and attention to detail built a reputable European clientele, one being the Duchess of Windsor. The Baron and Baroness de Rothschild sponsored an exhibit in Paris in 1978, showcasing jewelry and sculpture by William de Lillo and Robert Clark. After a few years in France, William DeLillo and Robert Clark decided to move back to the United States, eventually settling down in Phoenix, Arizona. Not much is known about the House of DeLillo, however their pieces are some of the most scarce and coveted amongst private collectors and museums. Mr. DeLillo died in 2011 followed by his life partner Robert F. Clark a few years after.

About the Seller
4.9 / 5
Located in New York, NY
Vetted Seller
These experienced sellers undergo a comprehensive evaluation by our team of in-house experts.
Established in 2010
1stDibs seller since 2013
119 sales on 1stDibs
Typical response time: 1 hour

$395
Free Shipping
Enameled Lucite Charm and Gold Double Necklace of Elsa Martinelli
By Le Somale
Located in New York, NY
A favorite necklace of the actress Elsa Martinelli is this double strand gold plate chain with multi color pendants by jewelry company Le Somale. Each pendant or charm is made of a c...
Category

$350
Free Shipping
1980s 3 Strand Pearl and Rhinestone Long Necklace
Located in New York, NY
A stunning triple stand faux pearl and rhinestone bead necklace from the 1980s. The faux pearls are a creamy off white in color and Baroque pearl style in three sizes of 10, 12, and...
Category

1.38 Carat Diamond Ruby Emerald Pearl Yellow Gold "Fly" Pendant Beaded Necklace
By Luigi Ferrara
Located in Naples, IT
The Fly Pendant is made of 9K Yellow Gold and Sterling Silver but it is available also in 14K and 18K Yellow Gold. The Fly Pendant has 0.08 Carats of White Rose Cut Diamonds. The Owl...
Category

$3,320 Sale Price
20% Off
0.70 Carat White Diamond Emerald Pearl Yellow Gold Owl Pendant Beaded Necklace
By Luigi Ferrara
Located in Naples, IT
The Owl Pendant is made of 9K Yellow Gold and Sterling Silver but it is available also in 14K and 18K Yellow Gold. The Owl Pendant has 0.20 Carats of White Rose Cut Diamonds. The Owl...
Category