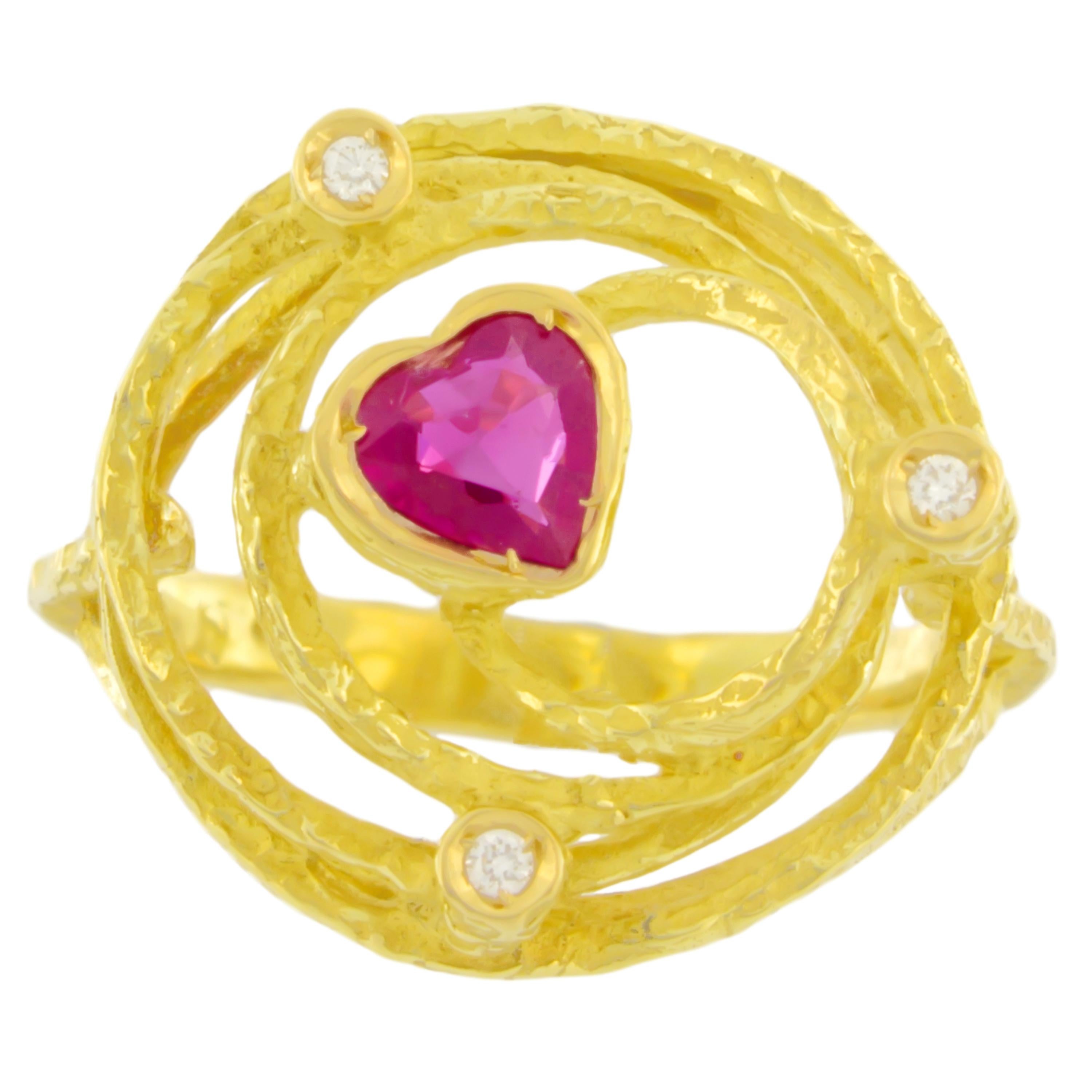 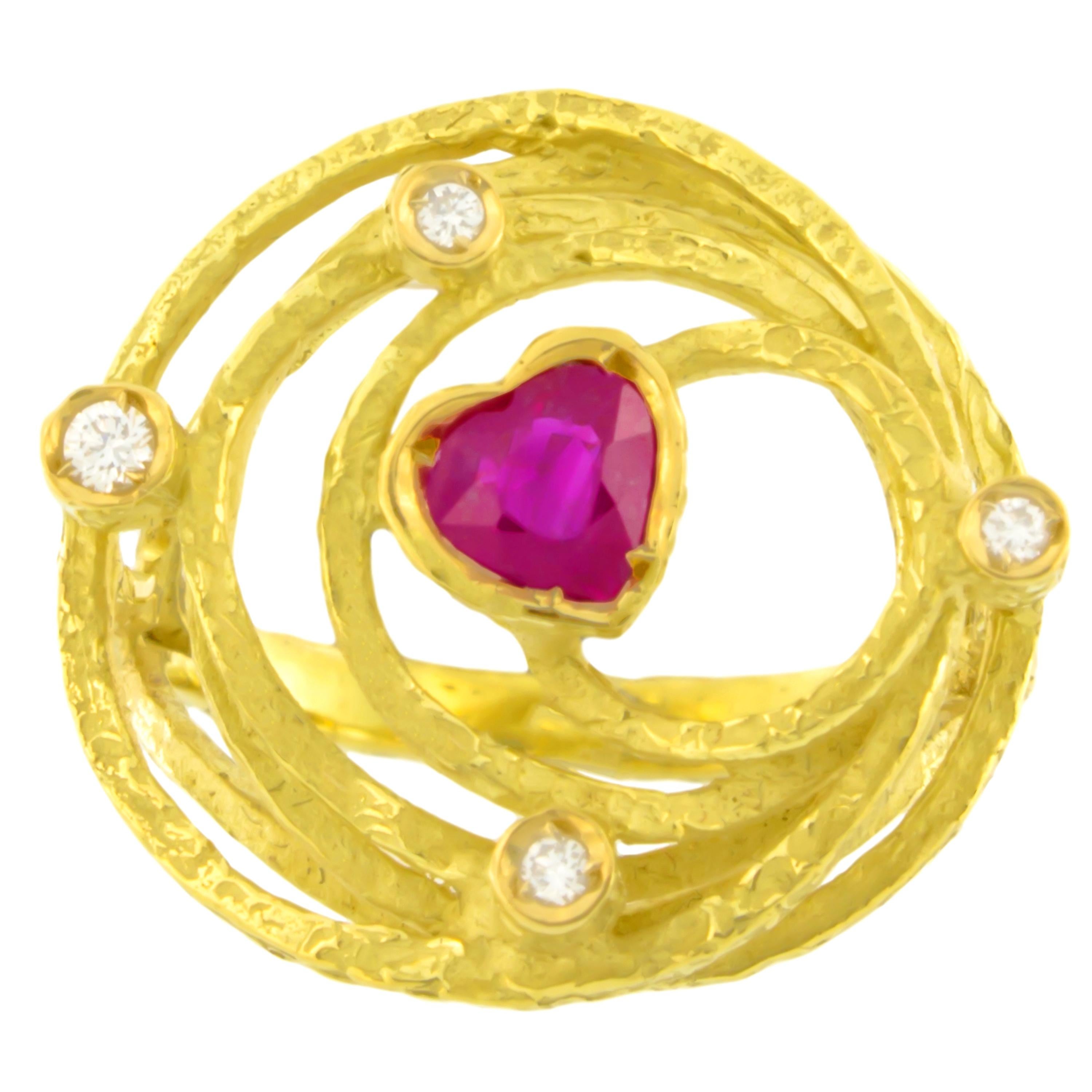 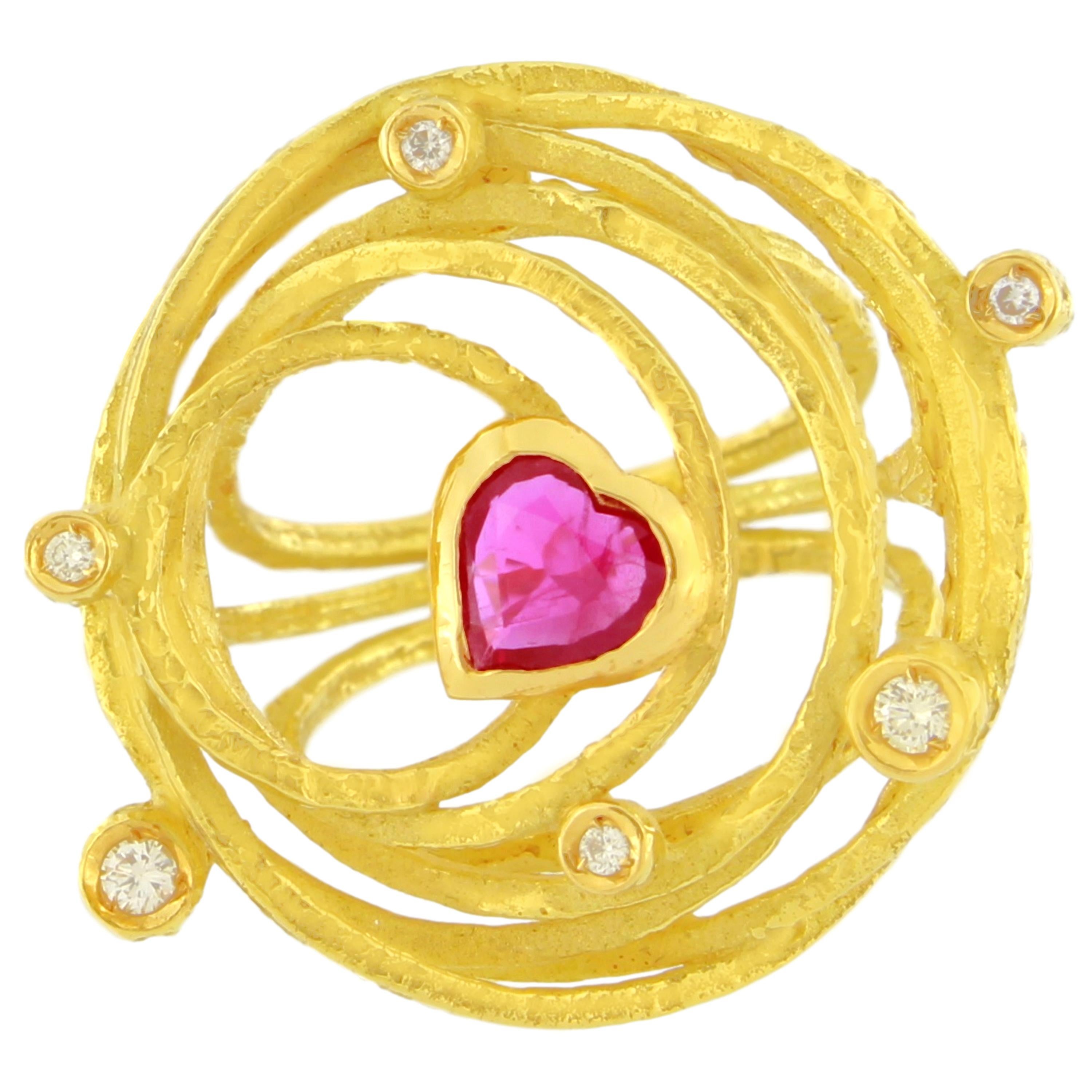 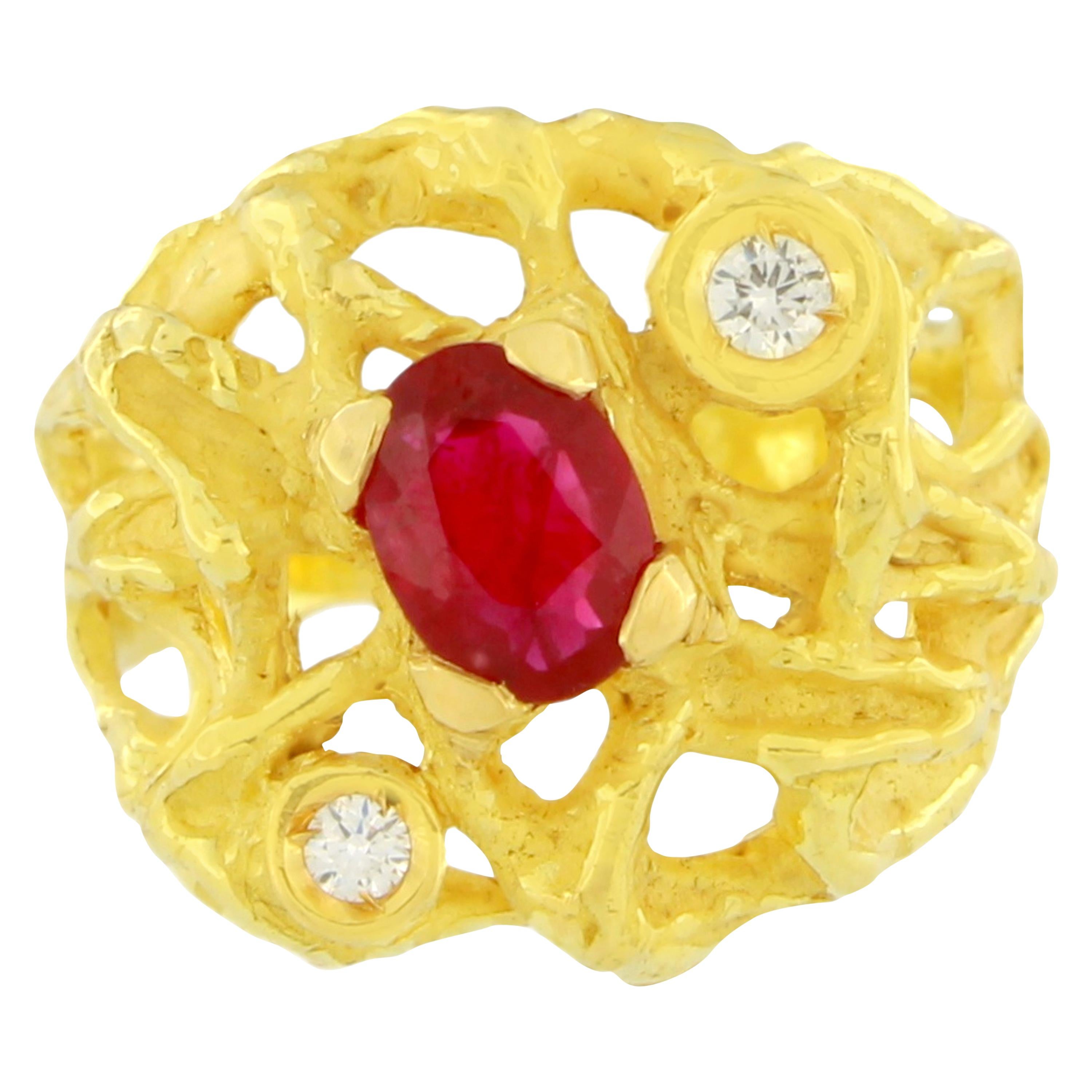 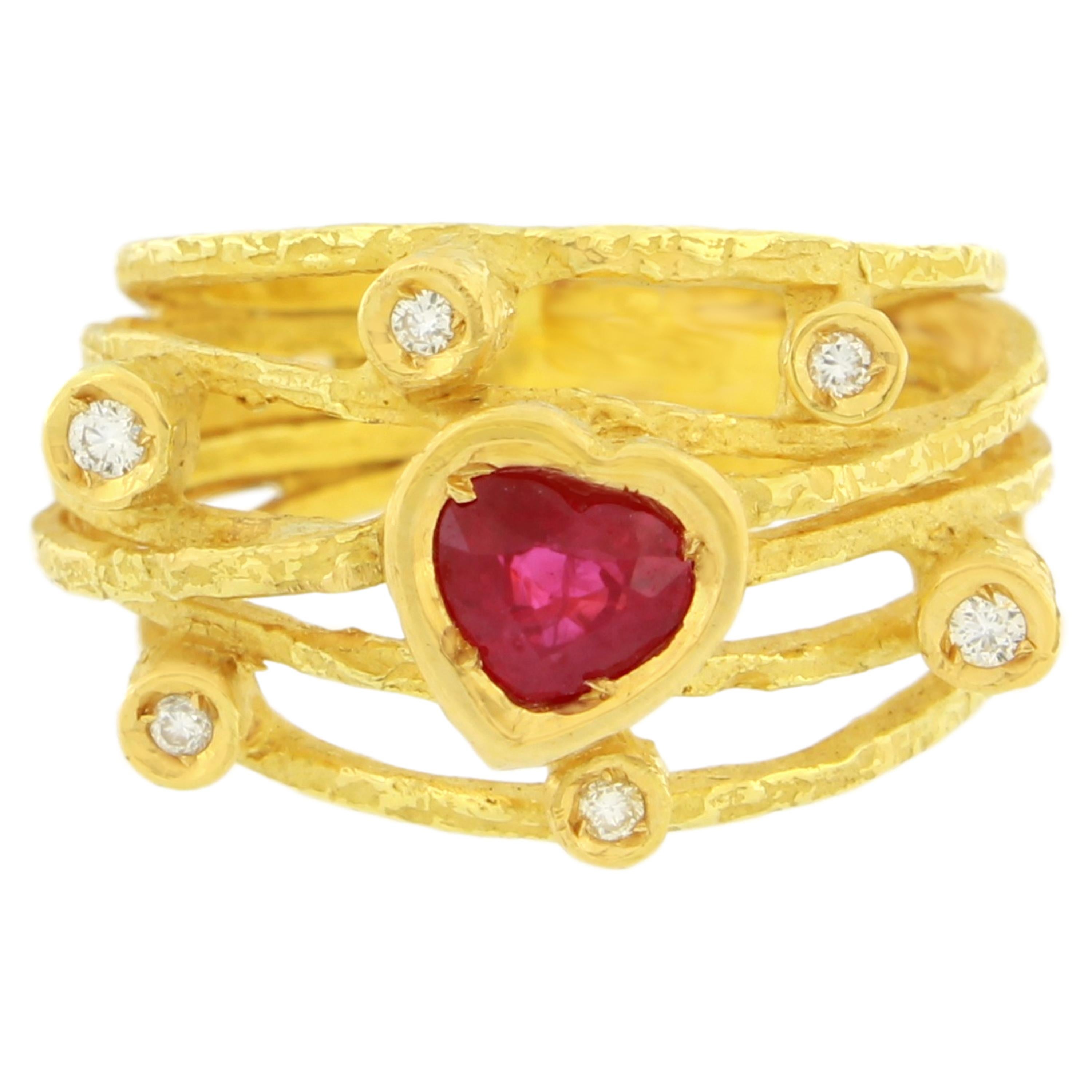 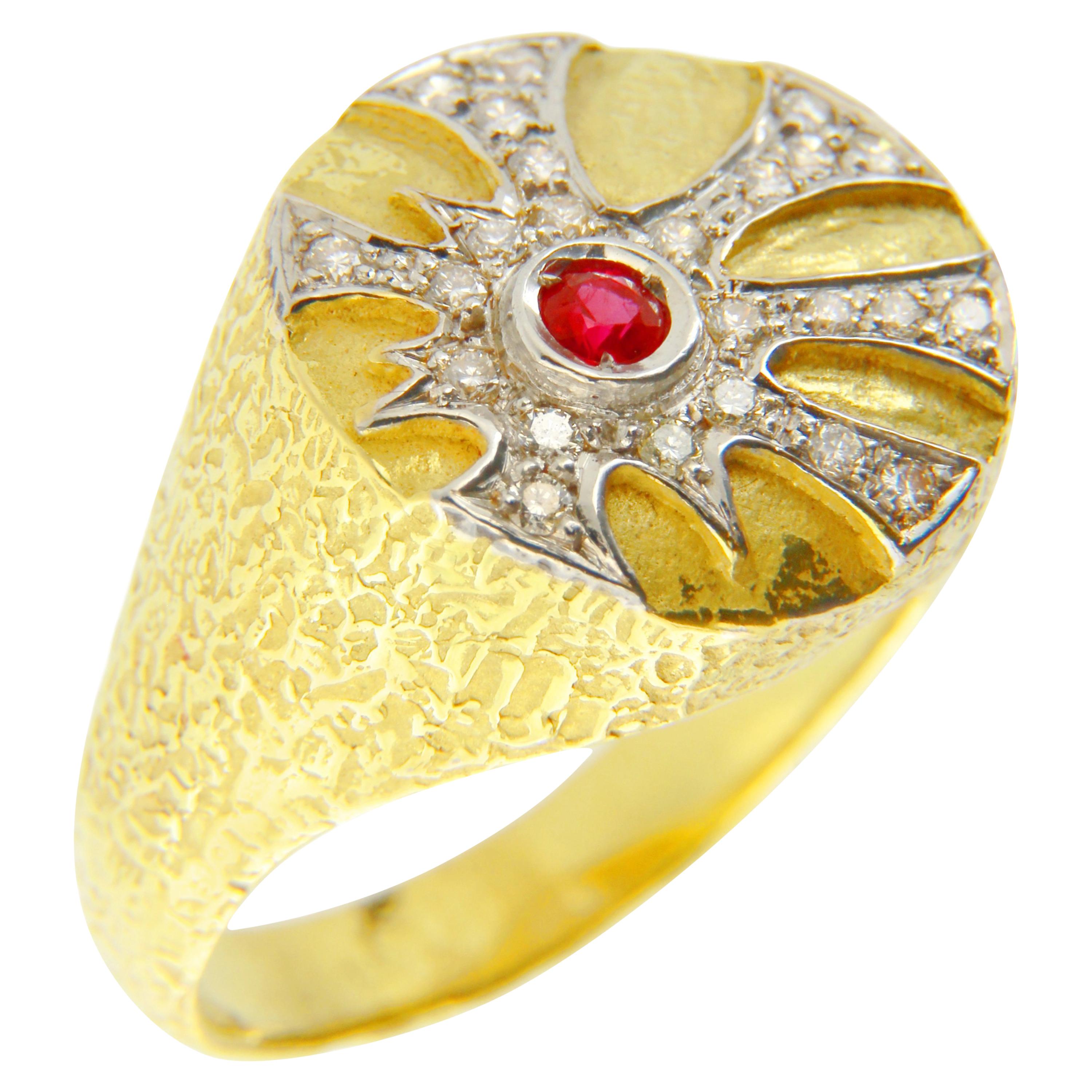 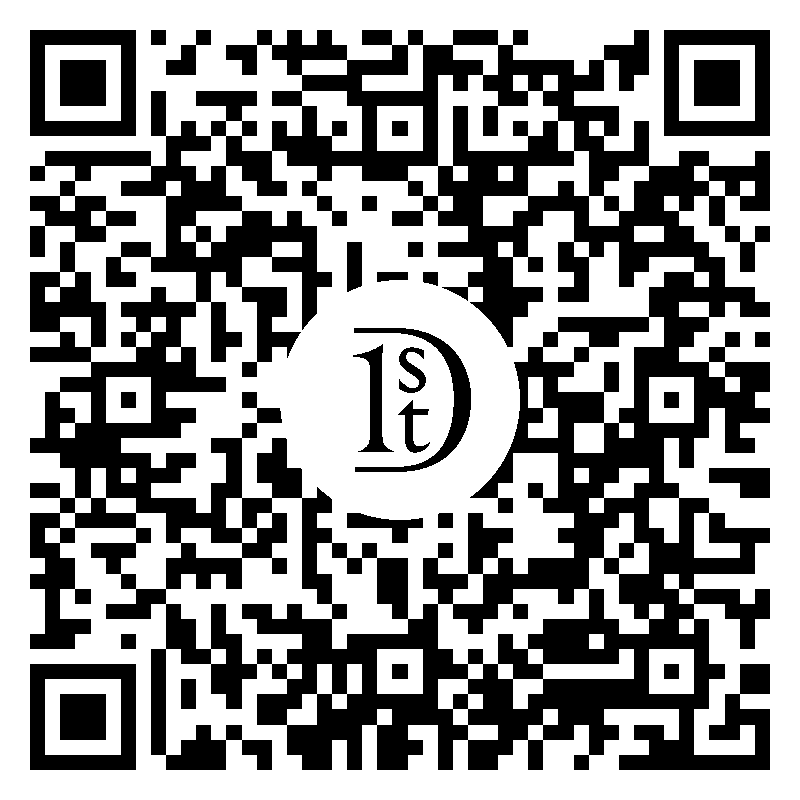 Lovely Heart Ruby and Diamonds Satin Yellow Gold Cocktail Ring, from Sacchi’s Universe Collection, hand-crafted with lost-wax casting technique. Lost-wax casting, one of the oldest techniques for creating jewelry, forms the basis of Sacchi's jewelry production. Modelling wax in the round allows to sculpt small and large pieces, and polishing with agate stones gives characteristic light effects. The Ring is comprised of 18 Karat Yellow Gold Satin Finish, set with a 0.5 Carat Heart Ruby in the center and surrounded of six 0.017 Carat each Round White Diamonds. The Universe is constantly evolving: the stars, the planets, the Earth, and humankind with its emotions, its feelings and its "Heart". All of this is symbolised in the jewellery of this collection: diamonds that trace orbits, attracted and repelled at the same time by a flaming heart. Sacchi's Jewels are entirely handmade by master craftsmen in our goldsmith workshop located in the center of Rome. Handmade in Italy (Rome). Ruby weight: 0.5 Carat approximately Diamonds n° and Weight: Six Diamonds , 0.017 Carat each. 18 kt Gold Weight: 8.0 grams approximately Size : Free resize, please contact us.

The Sacchi brand has been known as one of Rome's artistic jewellers since the mid-twentieth century when, in 1946, Agostino Sacchi founded the company. Among the first in Rome to use the "lost-wax" casting technique to create three-dimensional sculptures and jewellery pieces, Agostino sought from the beginning to offer creations inspired by the jewellery of ancient Rome, reworking these in modern style. Soon, thanks to his originality and professionalism, he became a part of Rome's excellence in goldsmithing. The sixties saw the Sacchi company establishing itself as a point of reference for an ever increasing clientele: the production of strictly hand-crafted jewellery, a symbol of the nascent "Handmade in Italy" movement, was in demand both in Italy and abroad, and commissions from the Vatican also became important. In the mid-seventies, Agostino's son, Corrado, began to collaborate with him, bringing innovative ideas to the business and giving life to different lines of contemporary jewellery. Upon Agostino's passing in 1978, Corrado fully became his successor, continuing the traditional craftsmanship that still characterises the company today: innovating, experimenting with new forms, creating jewellery that looks to the future but also, at its heart, draws upon a past that cannot be less than inspiring. For several years, Corrado's sons, Andrea and Filippo, have actively participated in the family business, which thus continues into its third generation. 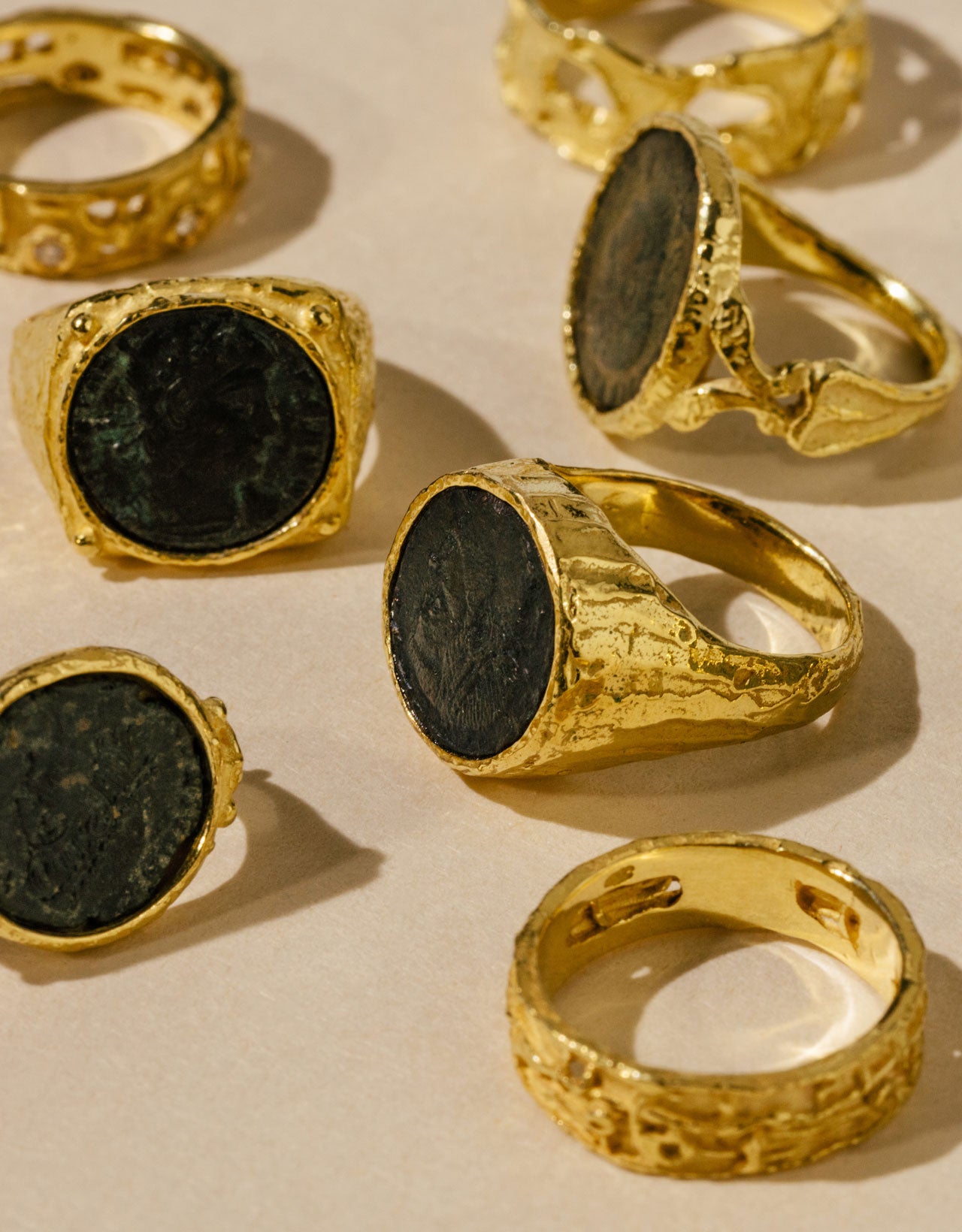 $5,200
Free Shipping
Handcraft Amber 18 Karat Yellow Gold Diamonds Ruby Cocktail Ring
By SCALA GIOIELLI
Located in Marcianise, IT
For any problems related to some materials contained in the items that do not allow shipping and require specific documents that require a particular period, please contact the selle...
Category