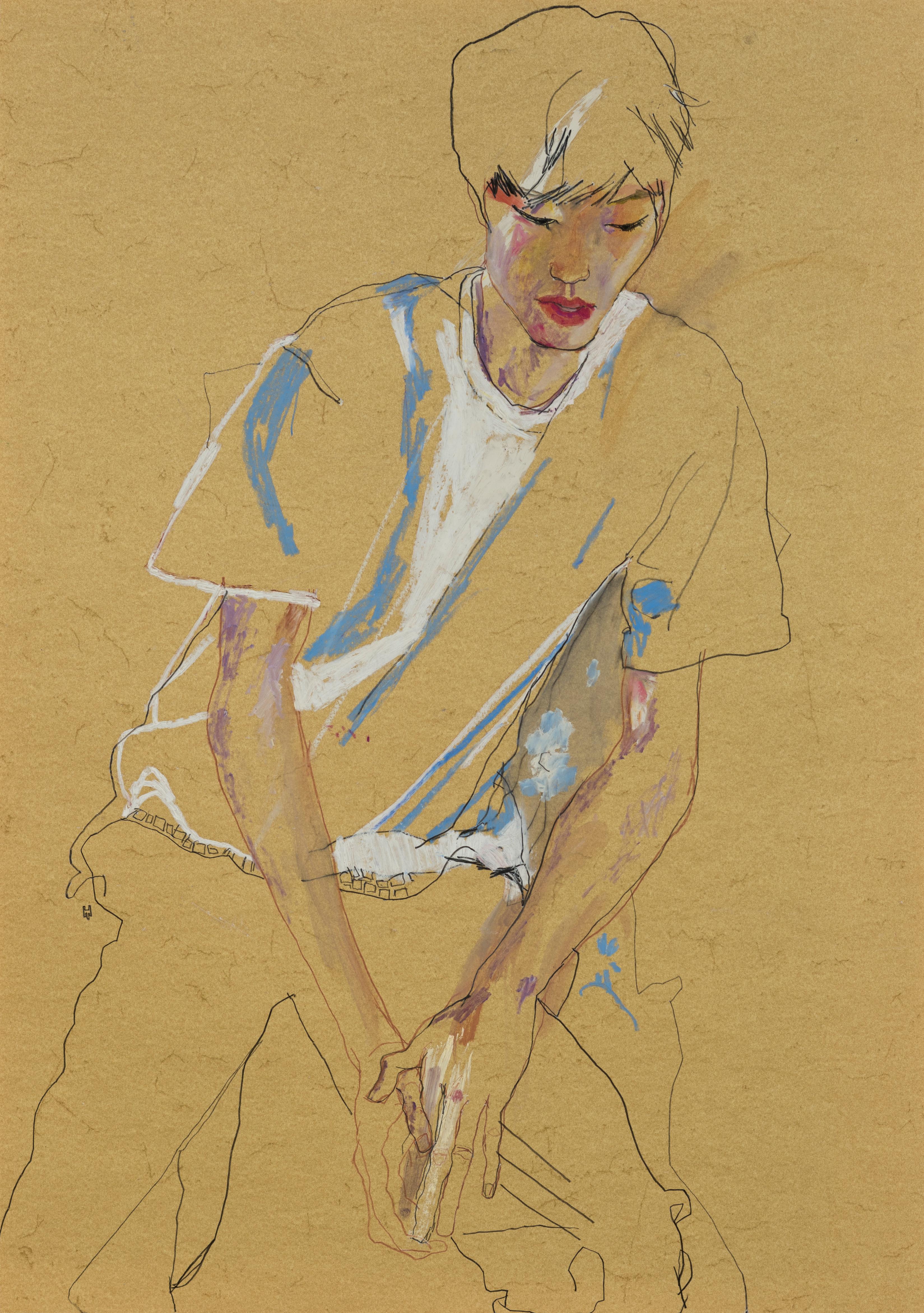 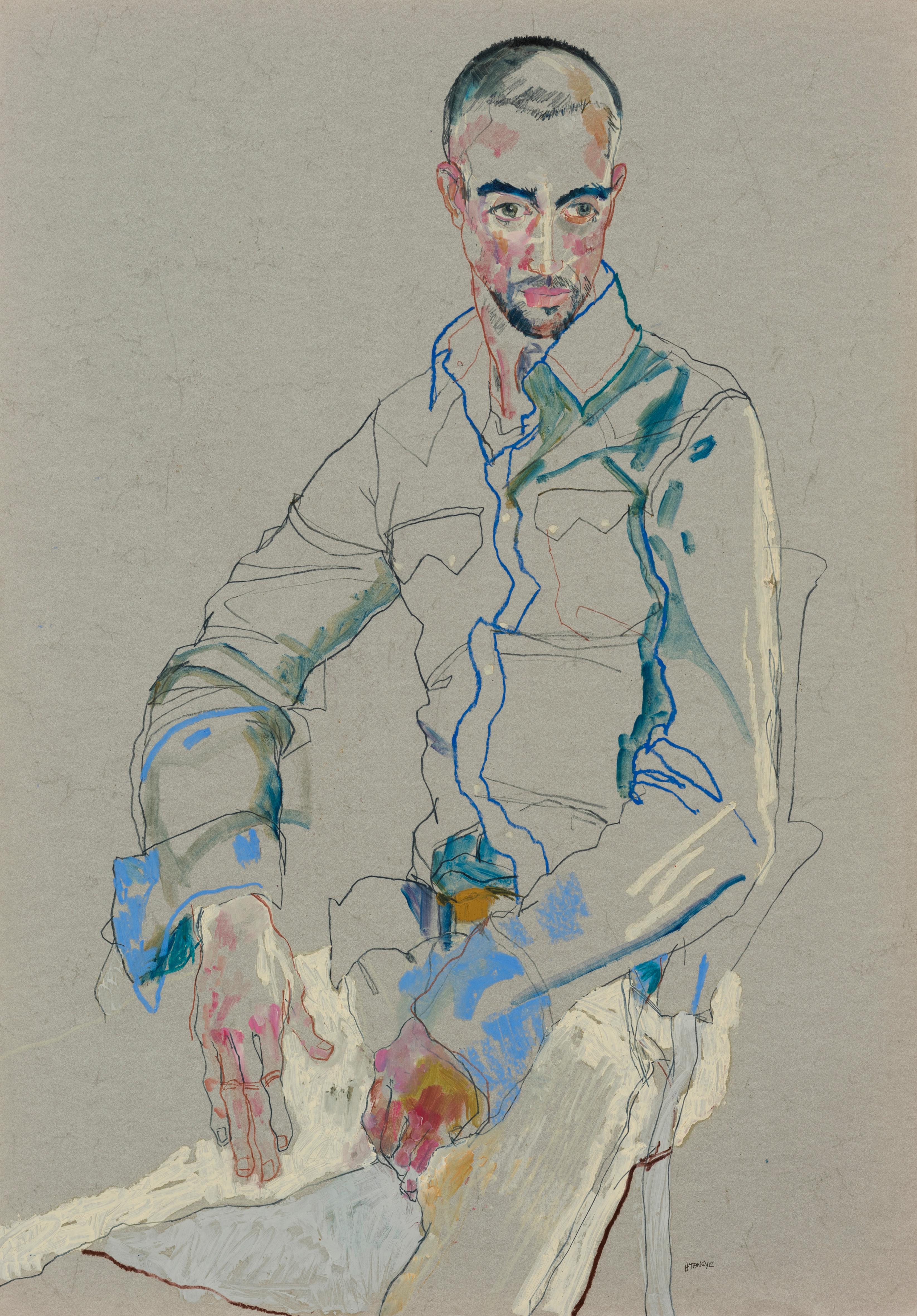 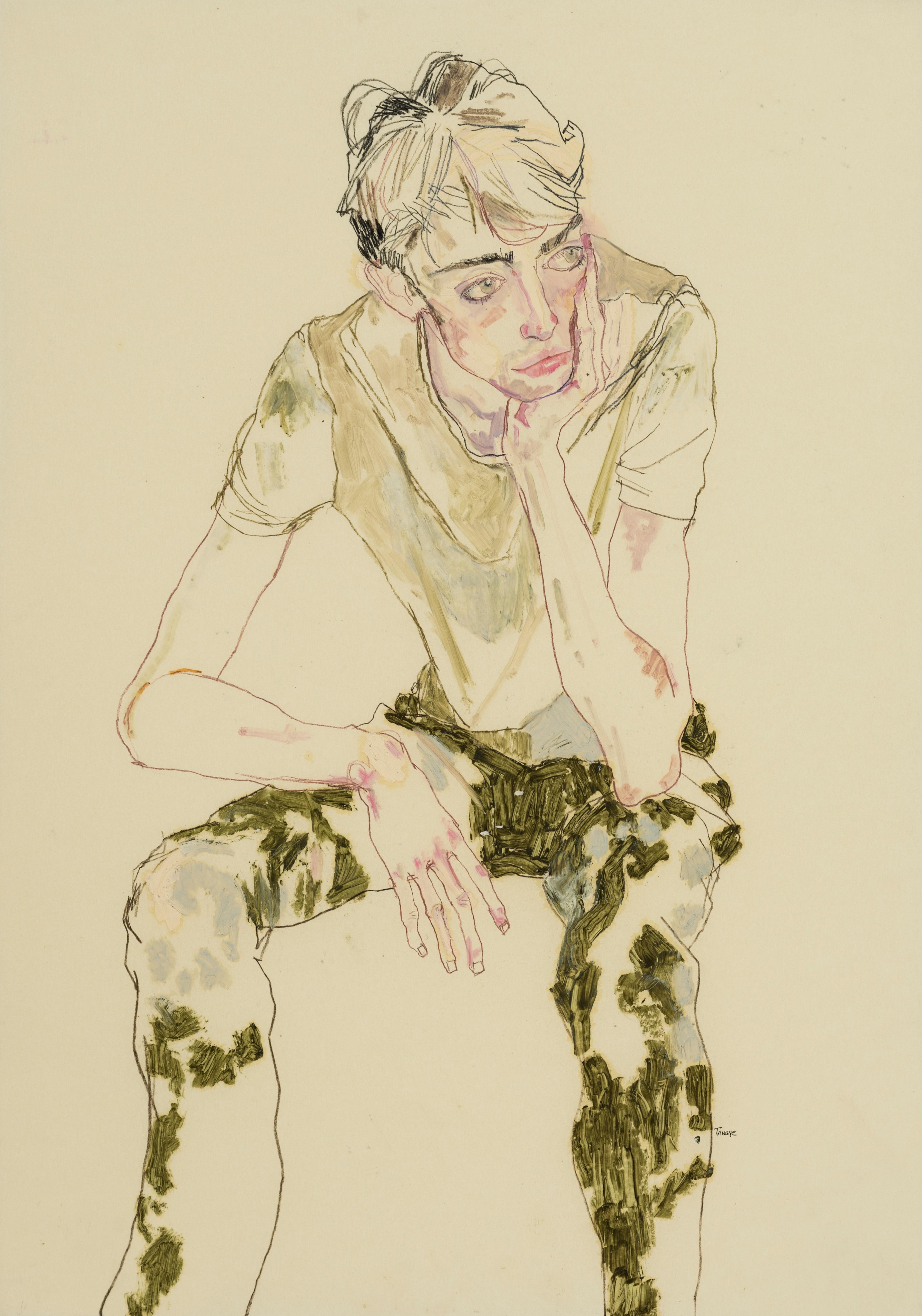 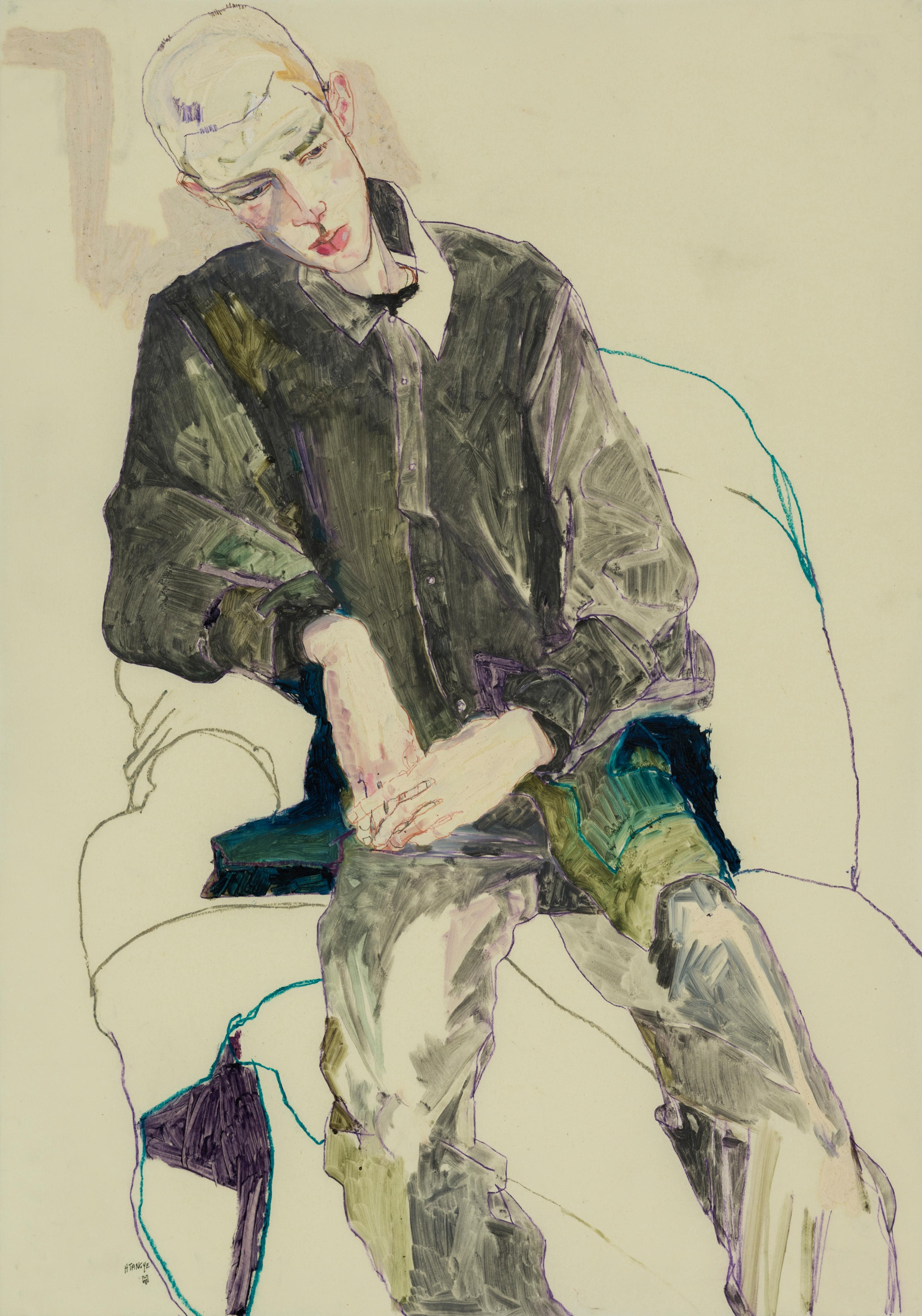 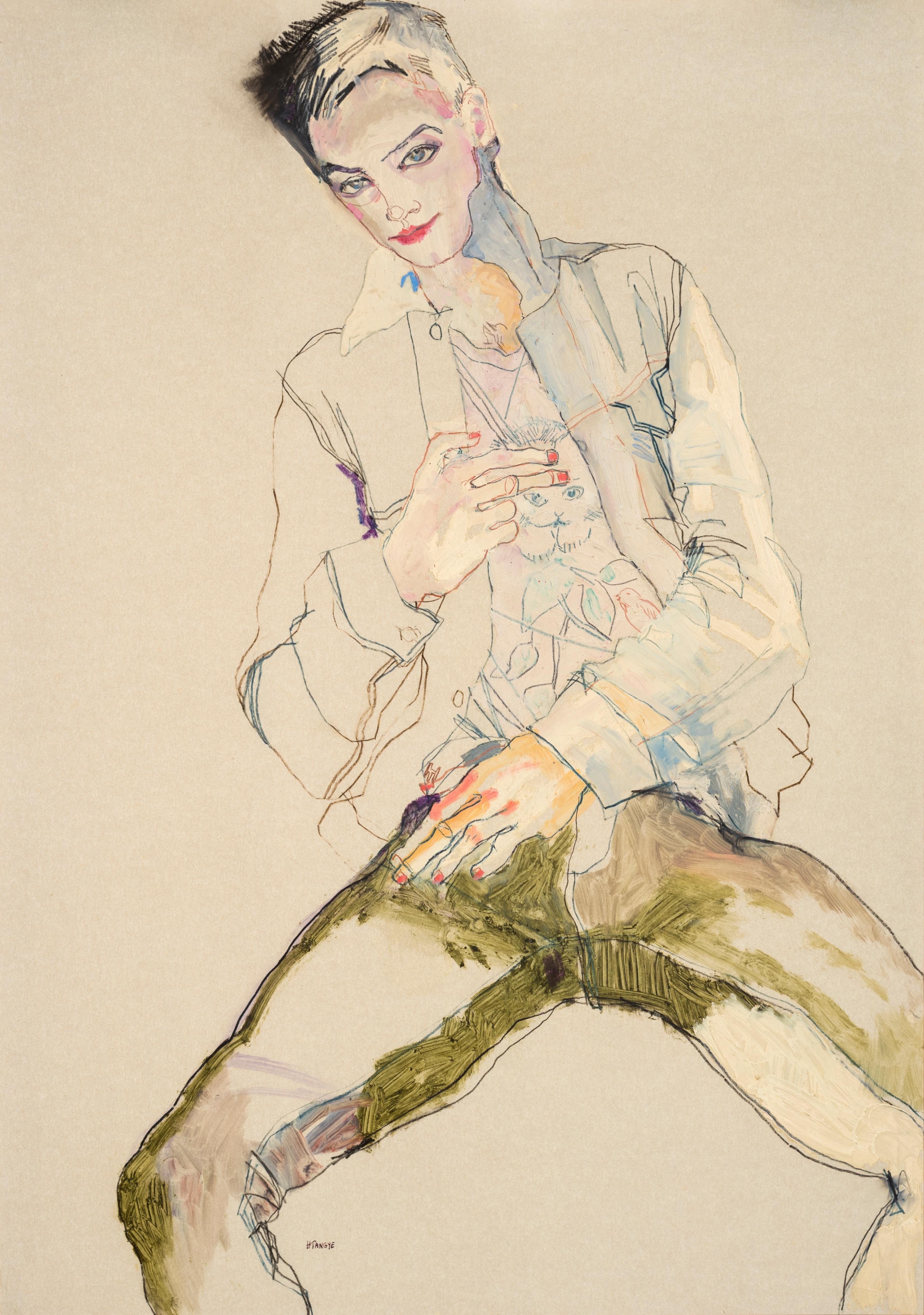 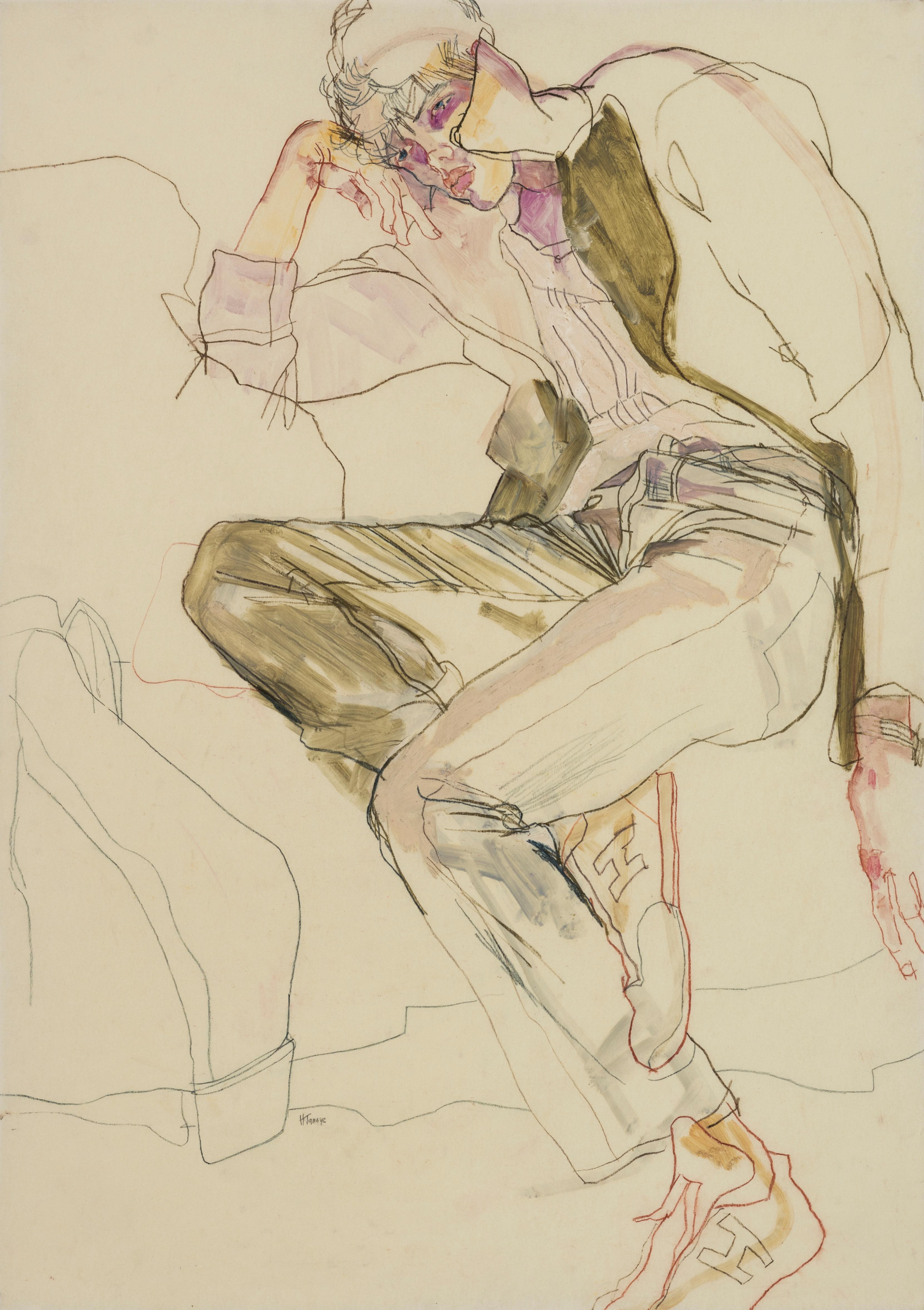 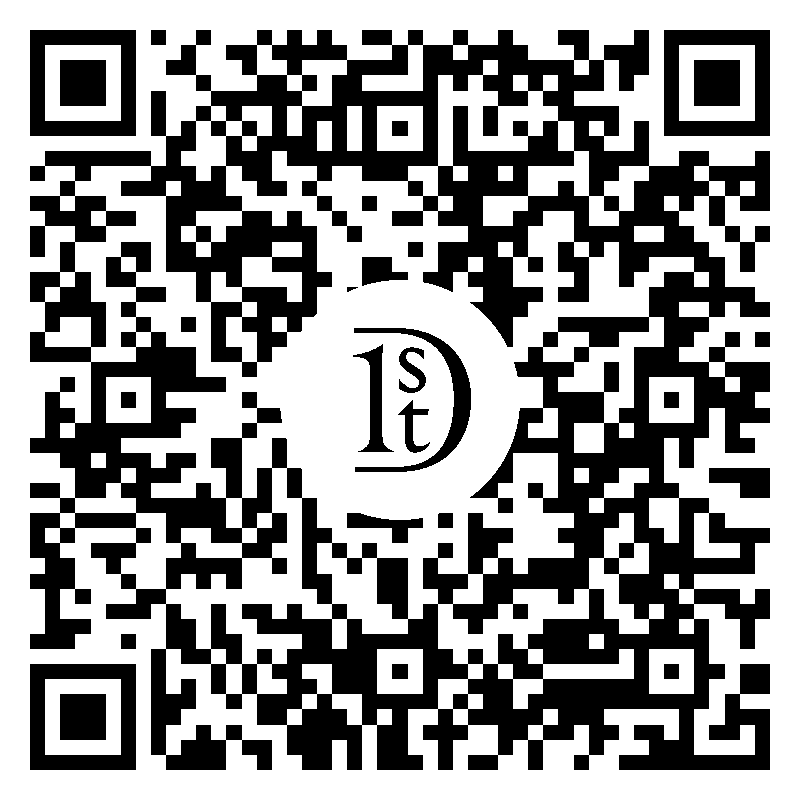 "Ahote," an original mixed media on paper by Tom Perkinson, is a piece for the true collector. His use of saturated violets, vivid yellows, and resplendent oranges pushes color to almost-otherworldly realms. Perkinson describes his style of painting as "Romantic Realism," a technique that incorporates two iconic art movements. This style, in combination with the imagination of the artist, produces remarkable results, showcasing Perkinson's keen ability to capture emotion, nature, and life - all in a brushstroke. Both his technical talent and choice of subject matter pair nicely with its original wood frame with hand painted accents. This masterful work is perfect for those who have an affinity for art depicting American Indian culture, Plains Indians, Hopi Indians, romanticism, realism, and color-rich works. The Ahote, meaning "restless one," is a hunter that originates from the Plains Indians, but has been adopted into the Hopi culture. He comes in two colors; yellow (Sikyahote) or blue (Sakwahote). His long and trailing eagle's feather headdress resembles a Plains Indian warrior. The colorful triangular patch, with pendant colored circles between the eyes, represents the flowers of spring. Ahote appears in the Mixed Dance and the Plaza Dance. Sometimes, he carries a roast or boiled corn to give to the audience during his performance. In a Plaza Dance it is not unusual to see a line of Sakwahote with several Sikyahote, and a white or red form as well. All indications in his costume point to inspiration from a Plains-type warrior, particularly the feather headdress. The Ahote is painted in two different ways. In one, he appears with planets on his mask (as seen here). The other Ahote version has a "split" mask with different colors on each side. A rattle is in his right hand and he carries a bow in his left. In the artist’s own words: “My color combinations aren’t in the realm of the natural world, because I don’t paint reality; I’m a painter of fiction. I try to paint a sense of place, as though this scene really does exist. I have had my collectors ask me where this scene is, and I just have to point to my head and say I made it up. Thus, I think of my work as romantic realism. I’m painting a certain reality that I’ve invented, inspired by the fascinatingly rich Southwestern landscape.” “Color gets all the credit, but it’s the values that do all the work. I don’t begin with sketches, because I want to be free to follow the painting in any direction. I start with washes of different values and tints. Then, I begin to look for a landscape. Several directions will appear to me at this time, and then I have to decide on one of them. During these first few moments, I must establish my distance from the scene. Am I a mile away or just across the river? This is one of the first steps, and I have to decide before I can continue. It’s important for working out the perspective and how things are going to relate to one another in the picture. Then, as the landscape evolves, I look for more images to add to the composition.” You can find our other offerings by clicking on the "View All From Seller" button below or you can contact us for a direct link. Artist: TOM PERKINSON (1940-) Title: AHOTE Medium & Surface: ORIGINAL MIXED MEDIA ON PAPER (framed) Signed: HAND SIGNED AND DATED BY ARTIST LOWER RIGHT; HAND TITLED LOWER LEFT Year Created: 1981 Country of Creation: UNITED STATES Image Area Dimensions: 11.5 x 15.625 INCHES Paper Dimensions: 12 x 16 INCHES Frame Dimensions:* 19.5 x 23.5 x 1.75 INCHES *This work of art is being sold framed. Additional Info: HIGHLY COLLECTIBLE WORK BY TOM PERKINSON IN GREAT CONDITION IN ITS ORIGINAL WOOD FRAME WITH HAND PAINTED ACCENTS – FRAME IS IN GREAT CONDITION WITH MINOR WEAR CONSISTENT WITH AGE AND STYLE. Artist Info/Bio: ARTIST BIOGRAPHY DOCUMENT IS INCLUDED Documentation: CERTIFICATE OF AUTHENTICITY IS INCLUDED About the Artist: Tom Perkinson, born in Indiana in 1940, has become distinguished as a regional painter, known for his work grounded in the visually dramatic landscape of the Southwest. As a child, Perkinson discovered he had a love for the natural landscape, and a talent for art. He fostered that talent through classes at the John Herron Institute of Art in Indianapolis, and then at the Chicago Art Academy upon graduating from high school. He received a degree in art from Oklahoma Baptist University in 1964, before moving on to graduate school at the University of New Mexico. Here, among noted works of a larger scale, he continued to paint the landscape, and it was this work that began to reflect a new fascination with the Southwest. He had found what would become an infinite source of inspiration. Influenced by early painters of the southern Indiana landscape – painters like T. C. Steele, Vawter, Schultze, and Forsythe – Perkinson’s early work focused on landscape, still life, and city scenes. As his love of the New Mexico landscape grew, his work matured, finding influence in J.M.W. Turner, George Inness, and James Mcneill Whistler. Soon, a distinctive, sprung-from-the-imagination style he came to describe as ‘romantic realism’ began evolving. “None of these places really exist,” he says, “I just make them up as I paint them.” It was this preference for spontaneity that led to watercolor as his preferred medium. After more than four decades now as an artist painting New Mexico, Perkinson has built a prolific career. His work is included in private and public collections across the globe, and he is represented in the collections of many museums, including the Museum of New Mexico, Santa Fe; the University Art Museum, Albuquerque; and the Eiteljorg Museum of Western Art in Indianapolis. His work is also included in the May 2006 book titled “Landscapes of New Mexico, Paintings From the Land of Enchantment.” He currently resides in Corrales, New Mexico, where he has lived for 20 years with his wife, renowned jewelry artist Louise Perkinson.

1stDibs Buyer Protection Guaranteed
If your item arrives not as described, we’ll work with you and the seller to make it right. Learn more
About the Seller
5 / 5
Located in Los Angeles, CA
Gold Seller
These expertly vetted sellers are highly rated and consistently exceed customer expectations.
Established in 1998
1stDibs seller since 2021
14 sales on 1stDibs
Typical response time: <1 hour
More From This Seller

Nobu (Hands on Legs - Blue & White), Mixed media on ochre parchment
By Howard Tangye
Located in London, GB
Howard Tangye (b.1948, Australia) has been an influential force in fashion for decades. Lecturing at London’s Central Saint Martins for 35 years, including 16 years as head of BA Wom...
Category

$7,500
Ben Waters (Seated, Holding Head), Mixed media on Pergamenata parchment
By Howard Tangye
Located in London, GB
Howard Tangye (b.1948, Australia) has been an influential force in fashion for decades. Lecturing at London’s Central Saint Martins for 35 years, including 16 years as head of BA Wom...
Category

$7,500
Lee Hurst (3/4 Figure, Hands Together), Mixed media on Pergamenata parchment
By Howard Tangye
Located in London, GB
Howard Tangye (b.1948, Australia) has been an influential force in fashion for decades. Lecturing at London’s Central Saint Martins for 35 years, including 16 years as head of BA Wom...
Category

$7,500
Rock Star (Sitting), Mixed media on Pergamenata parchment
By Howard Tangye
Located in London, GB
Howard Tangye (b.1948, Australia) has been an influential force in fashion for decades. Lecturing at London’s Central Saint Martins for 35 years, including 16 years as head of BA Wom...
Category

$7,500
Wes Gordon (Lying Down - Collar Up), Mixed media on Pergamenata parchment
By Howard Tangye
Located in London, GB
Howard Tangye (b.1948, Australia) has been an influential force in fashion for decades. Lecturing at London’s Central Saint Martins for 35 years, including 16 years as head of BA Wom...
Category

Prokash Karmakar
Woman in a sari, Pastel on Board , Green Black Cream Color "In Stock", 1996