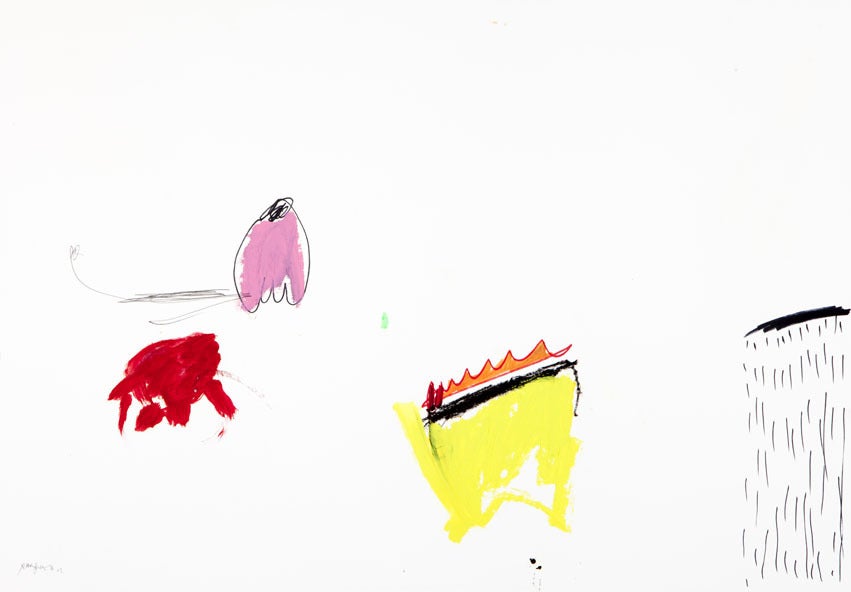 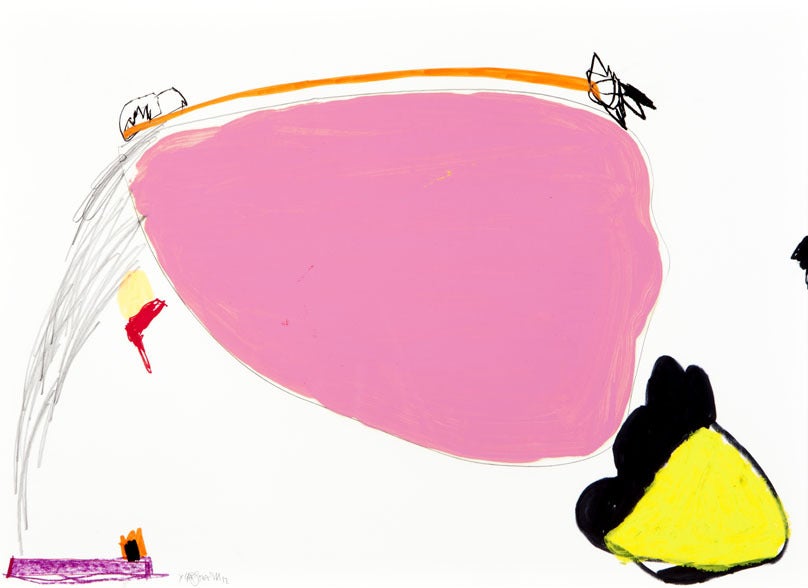 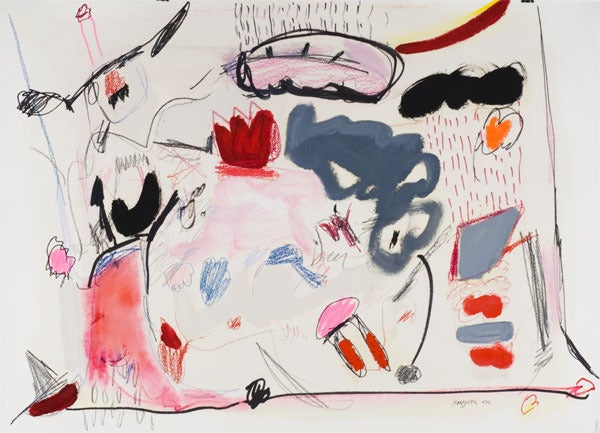 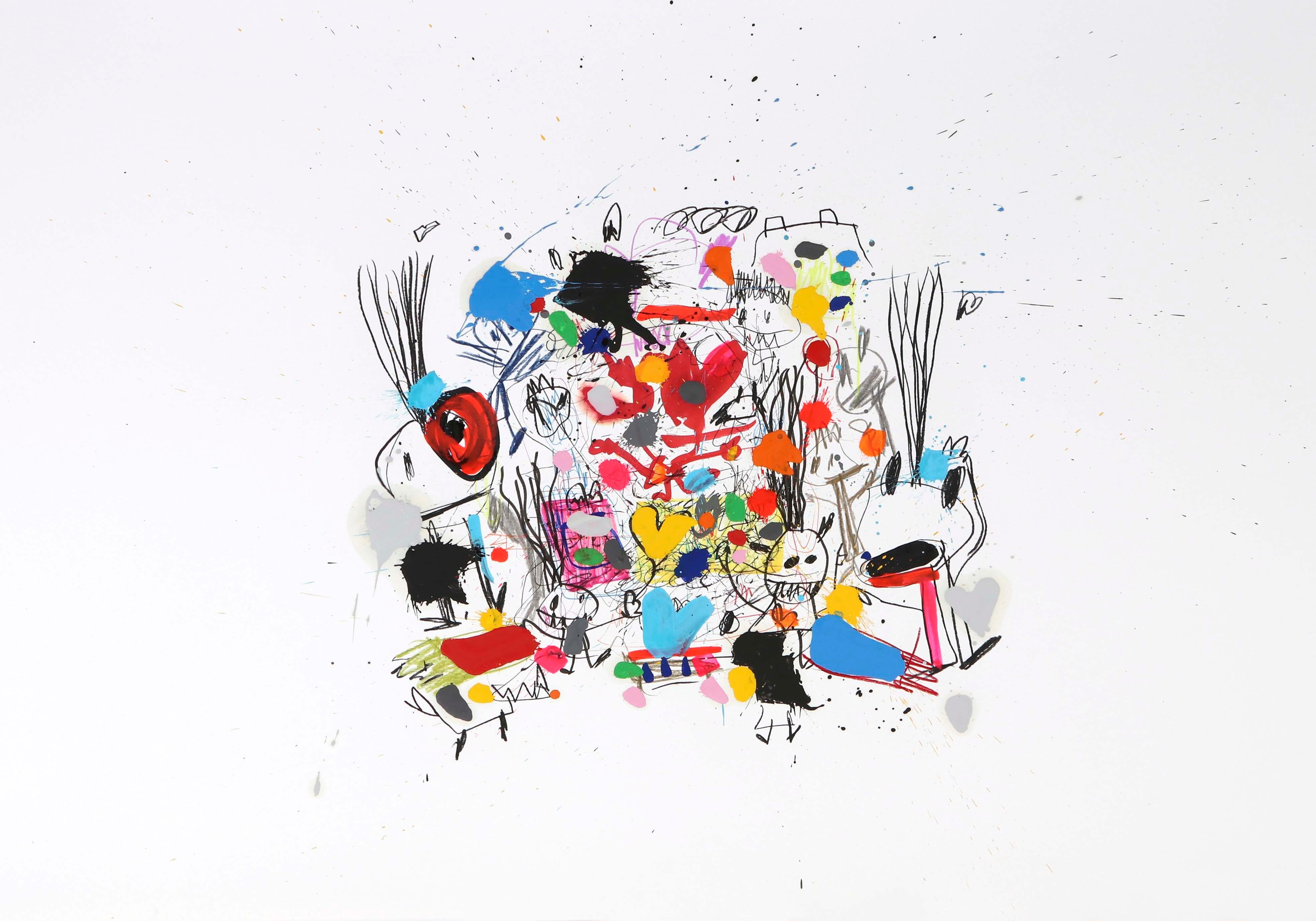 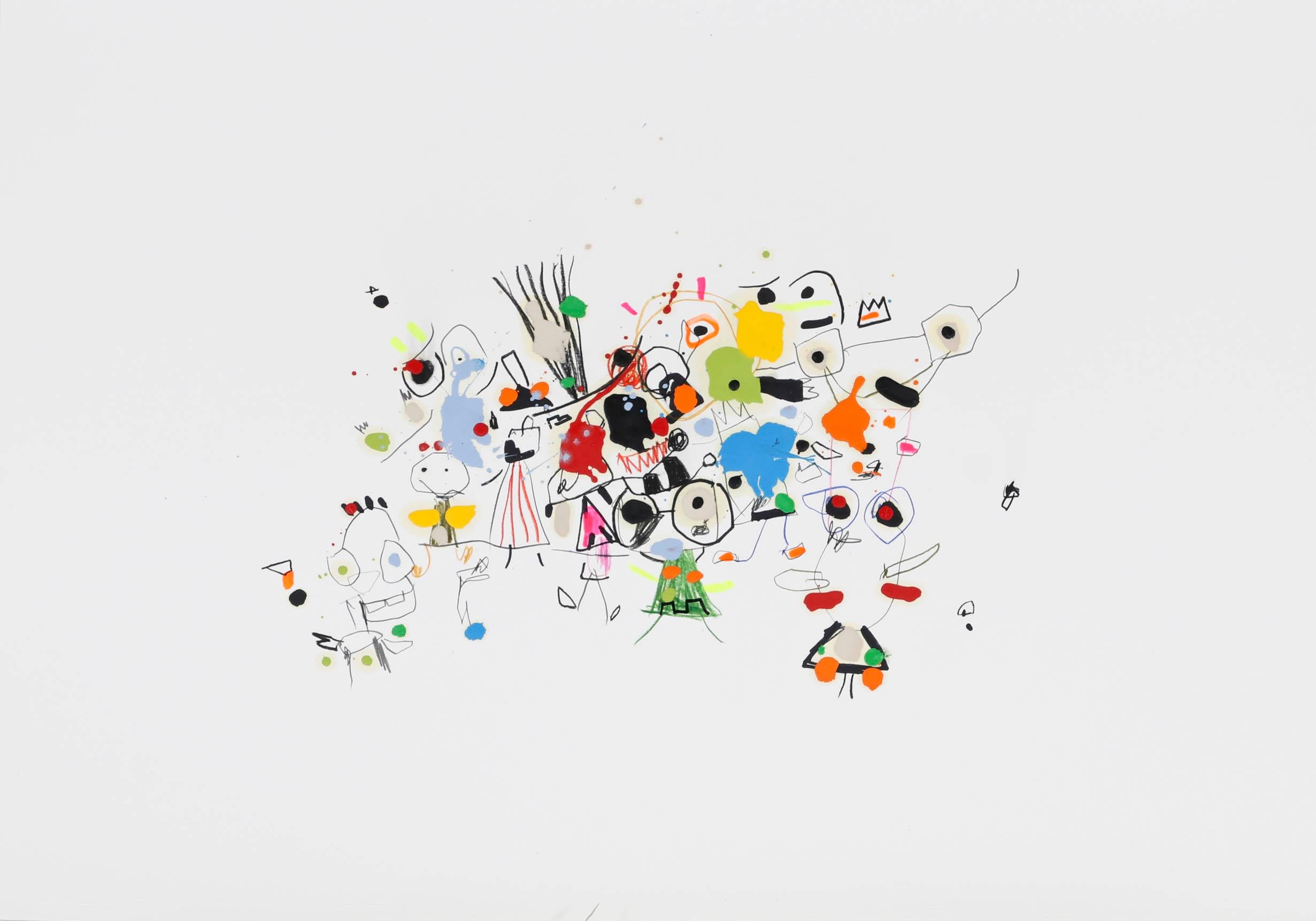 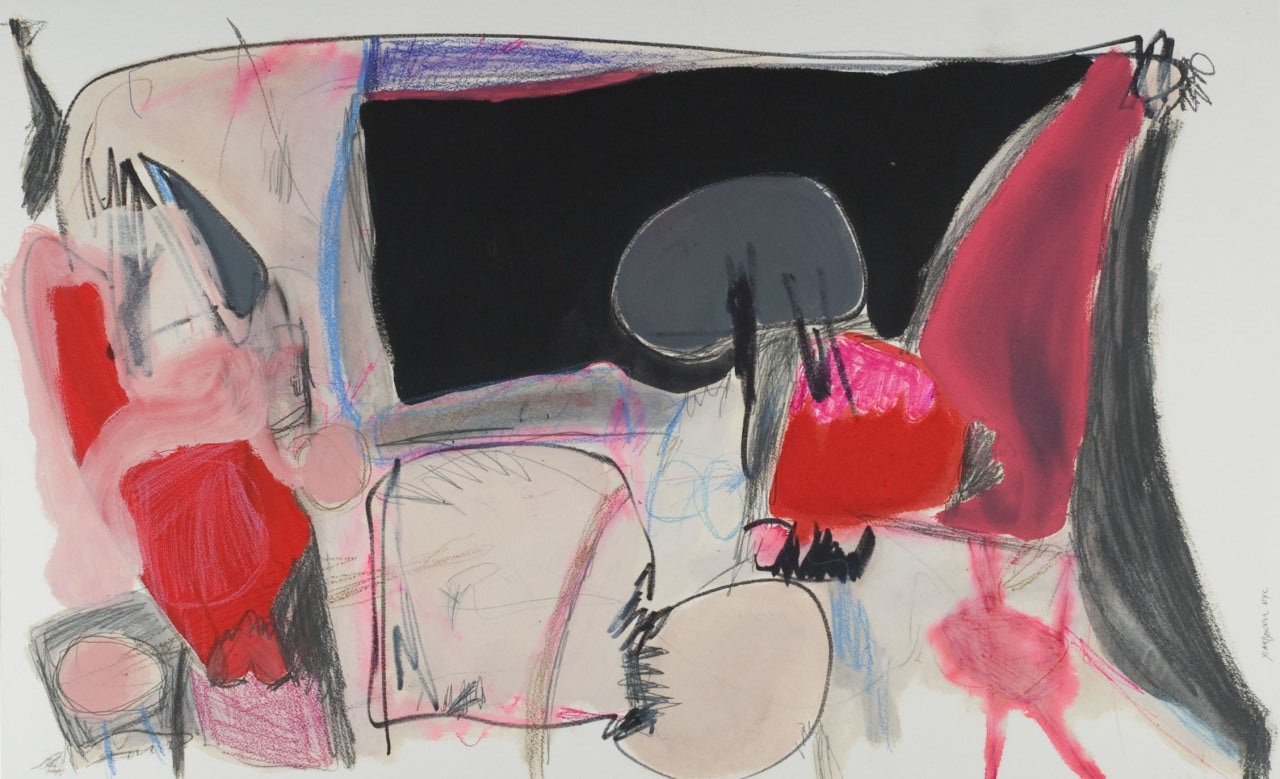 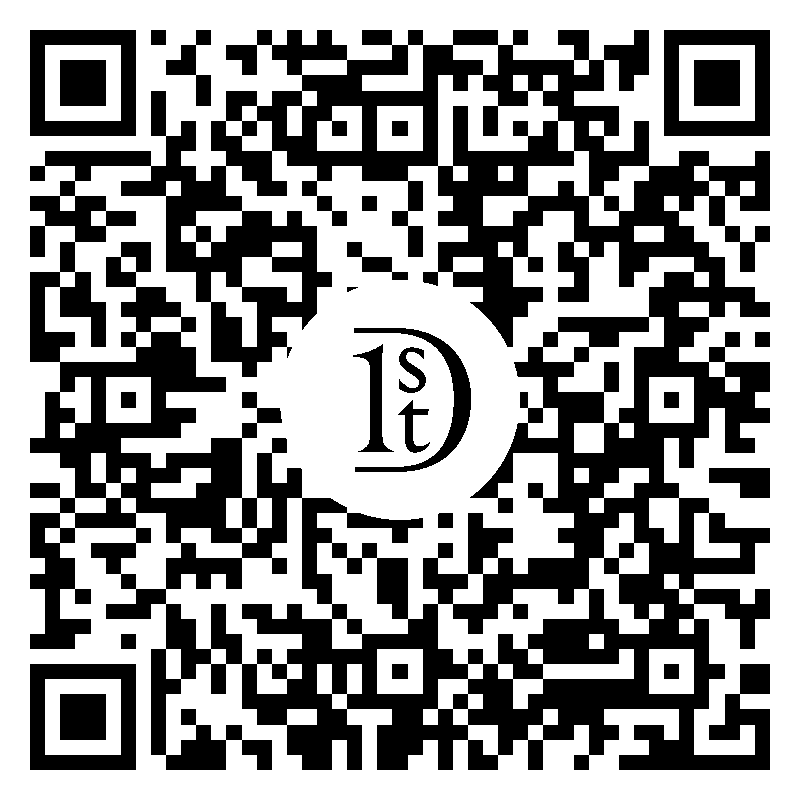 Spanish artist Xavi Carbonell born 1971, actively paints like a child as an adult, and leaves all of his pieces "untitled" so that each viewer can create their own story. The resulting work is fun, fresh, and powerful. The play-fullness of the pieces are enjoyed by both children and adults and some describe the work as a type of Rorschach test since everyone “sees” and smiles at something different. As we view this piece our imagination explodes and we wonder is this a painting of a party, a playground, a family dinner, an office meeting, a busy street? The answer is different for everyone. This mixed media on paper which includes oil paint, graphite, permanent marker, oil pastel, and pen uses vibrant reds, oranges, yellows, greens, blues, grays and blacks to offer an intense expression against the white space of the background. While most of the materials used are flat against the paper's surface we do see the dimensional texture of the oil paint, an occasional splatter, and brush strokes. Critics have described Carbonell's work as reminiscent of Cy Twombly, Jean-Michel Basquiat, Picasso and Miro. Carbonell has been selected for a variety of Awards and has exhibited in the Americas, Europe, Asia, Africa and the Middle East. Xavi Carbonell lives and works in Alcoi Spain. This piece comes unframed. 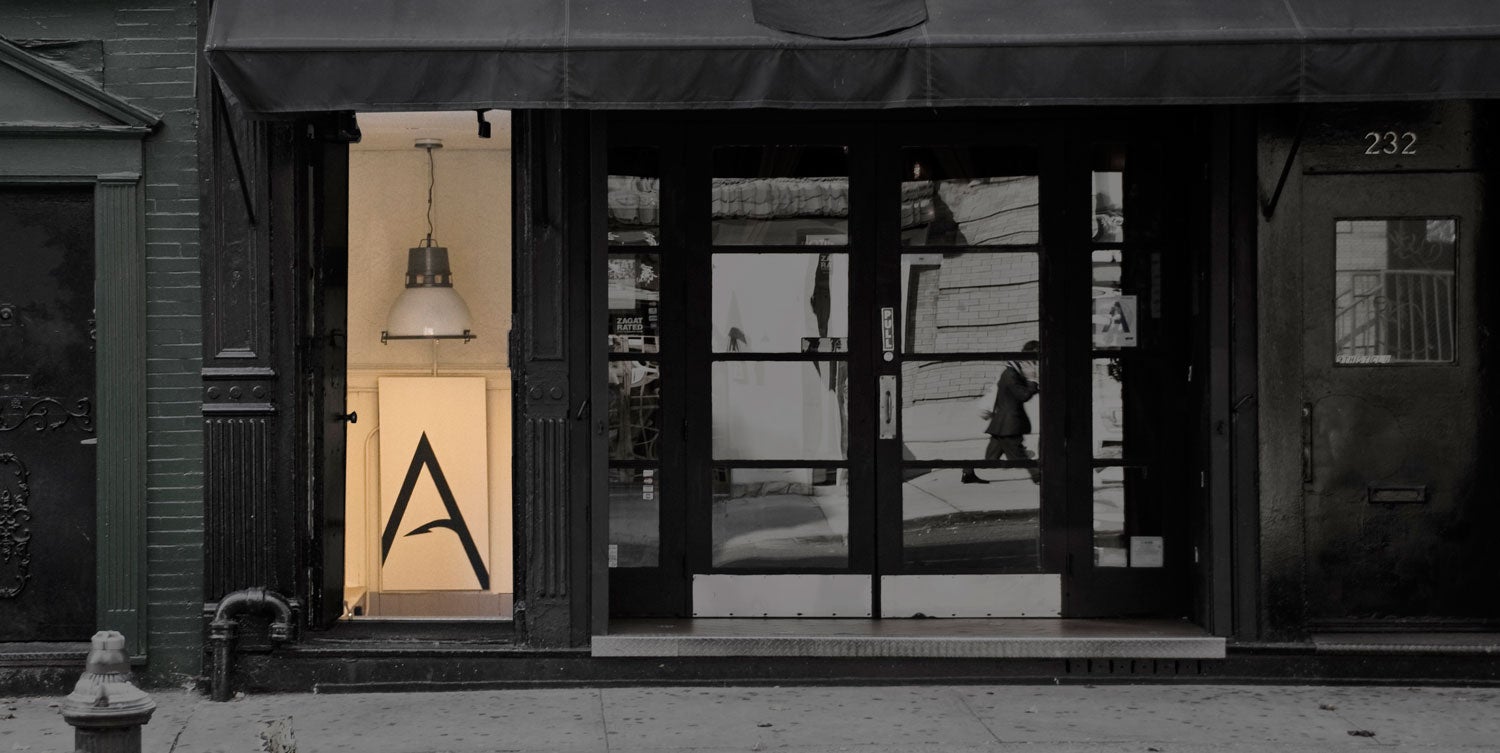 About the Seller
5 / 5
Located in New York, NY
Vetted Seller
These experienced sellers undergo a comprehensive evaluation by our team of in-house experts.
Established in 2010
1stDibs seller since 2013
85 sales on 1stDibs
More From This Seller

$1,100
Untitled 16-002
By Peter Gynd
Located in Brooklyn, NY
Peter Gynd (b. 1981, Vancouver, Canada) is a fifth generation artist whose practice centers around an exploration of landscape and its relationship with the body. Gynd studied old ma...
Category

$1,400
Porkparty, gestural abstraction w figure, energy
By Carl Dimitri
Located in Brooklyn, NY
Belongs to a series of colliding male figures. Feeling like this in the air lately.
Category