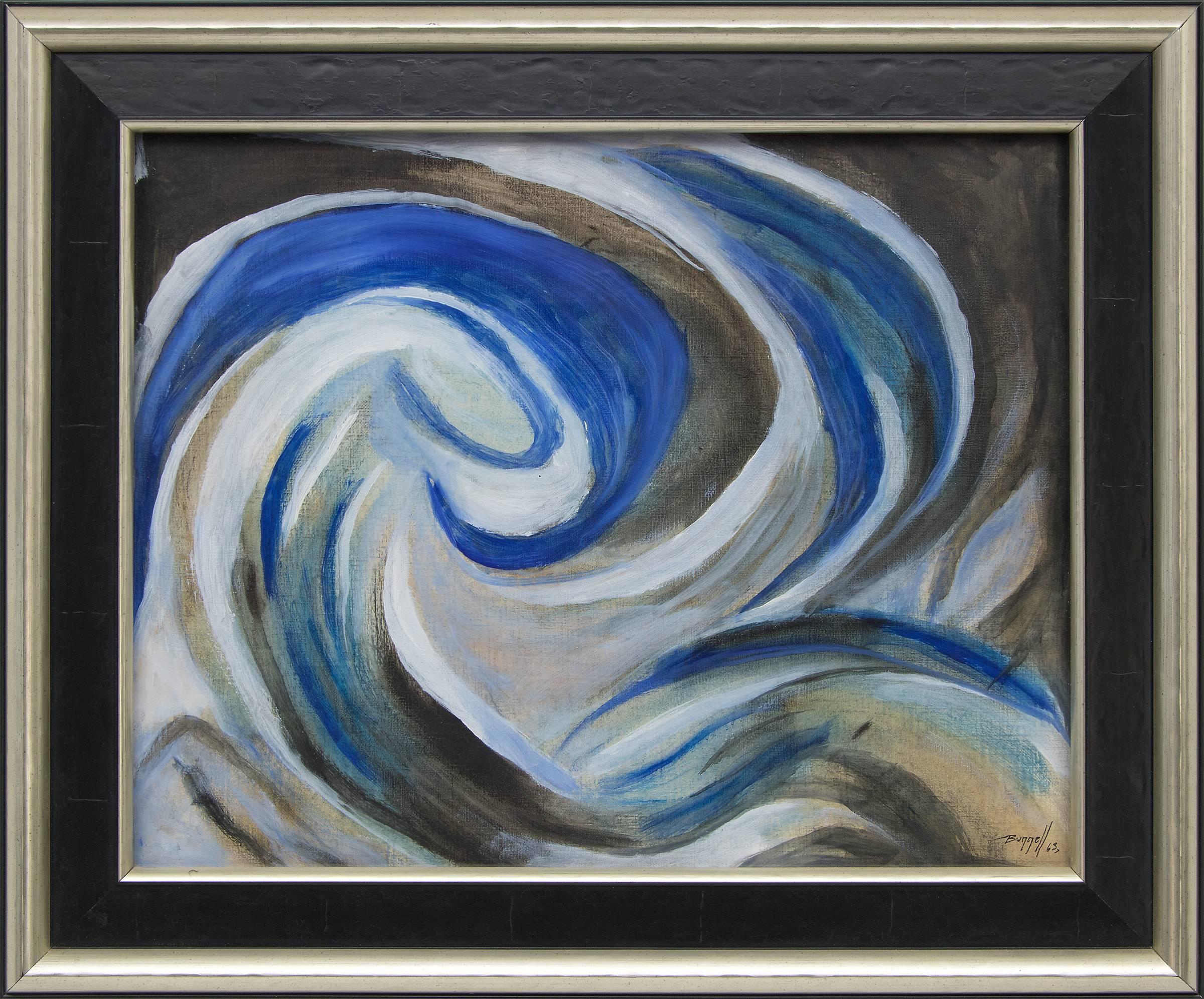 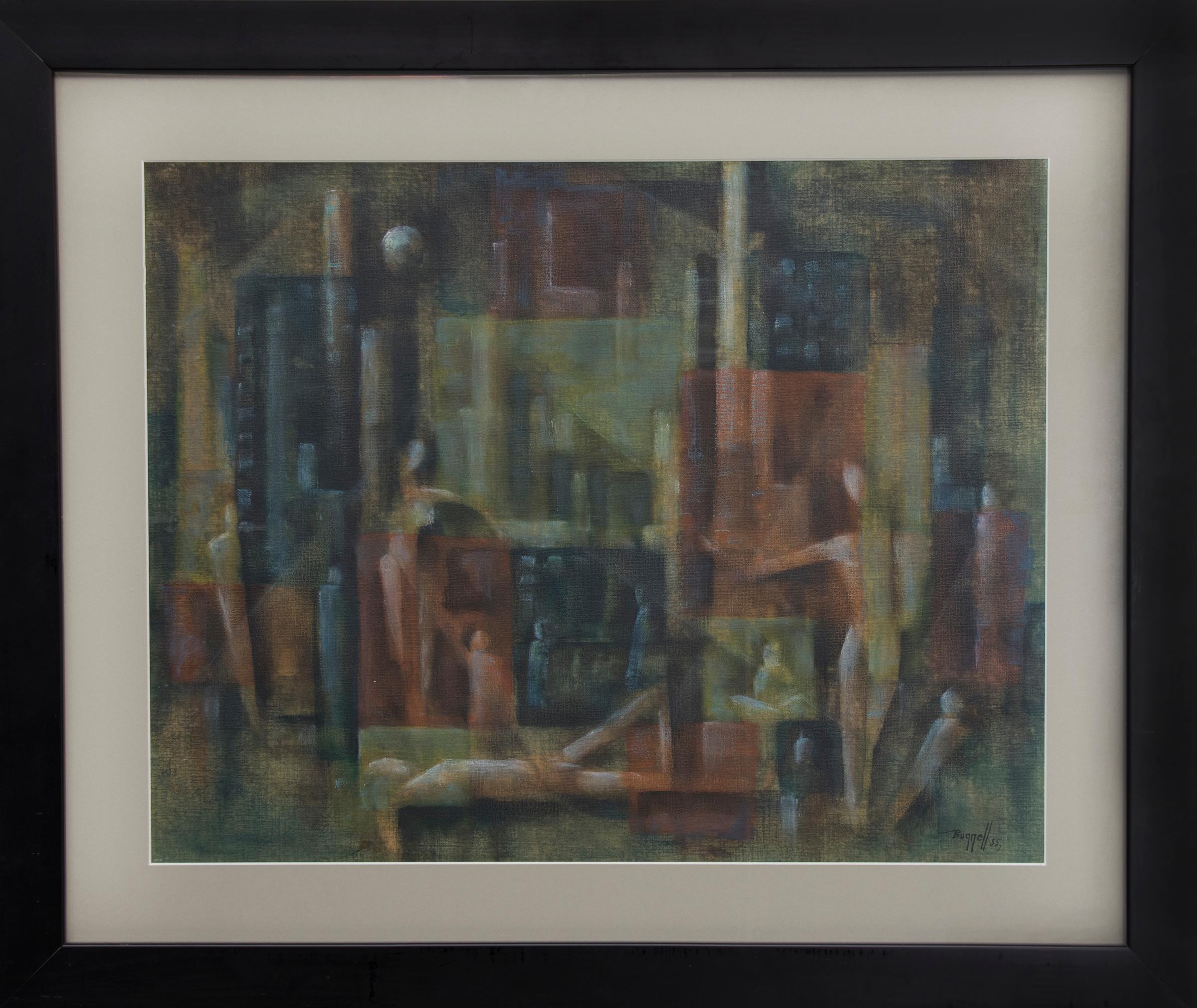 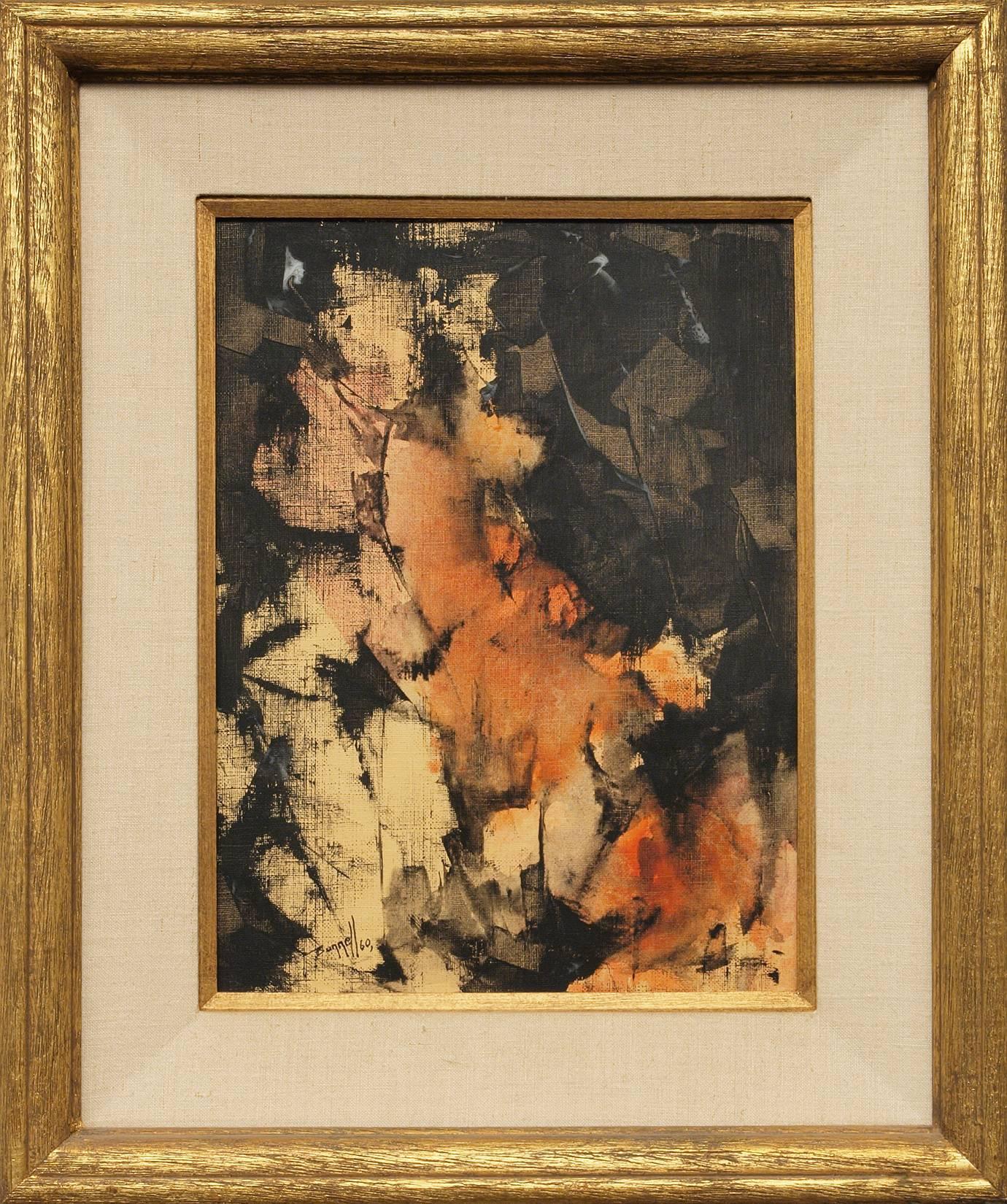 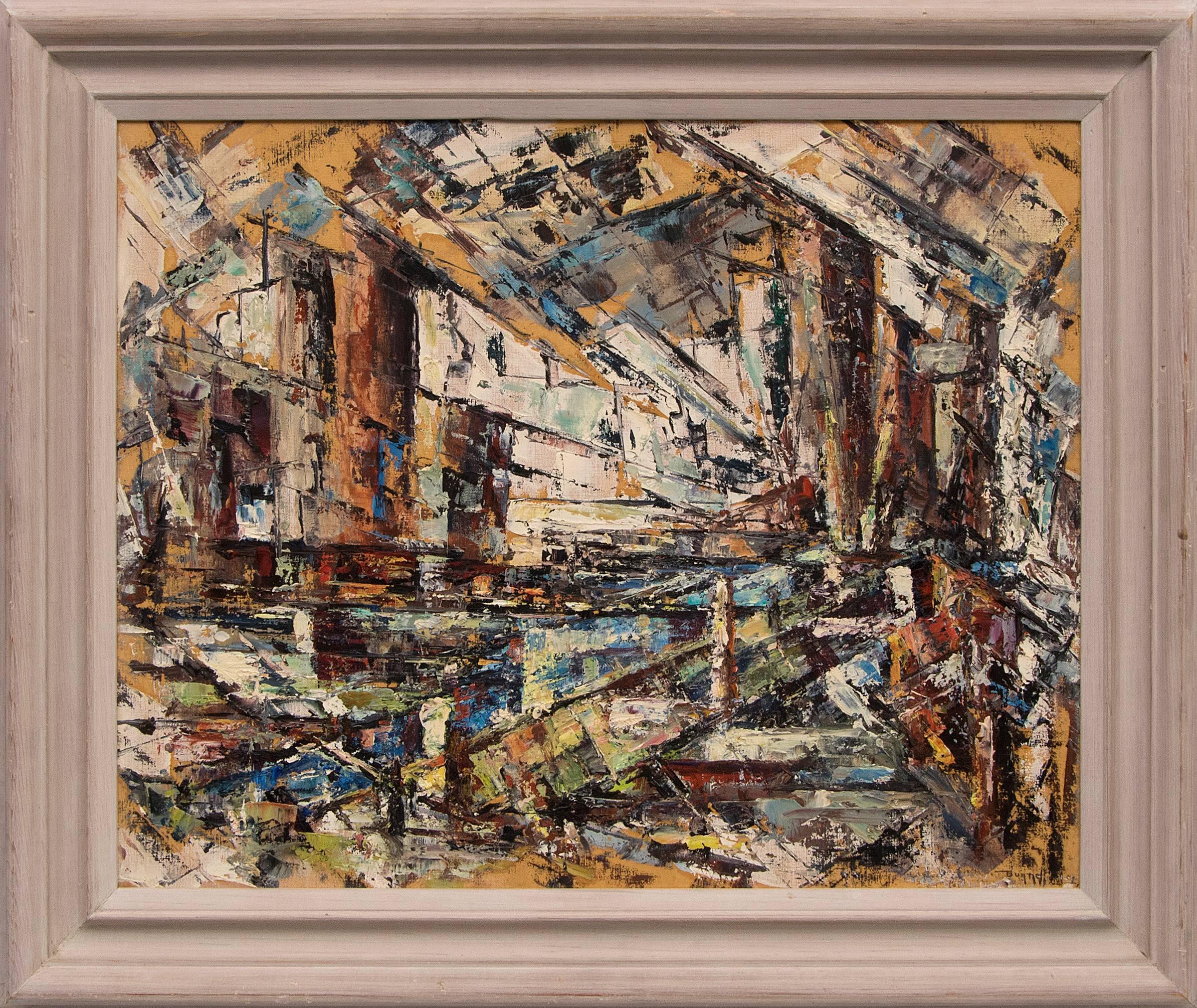 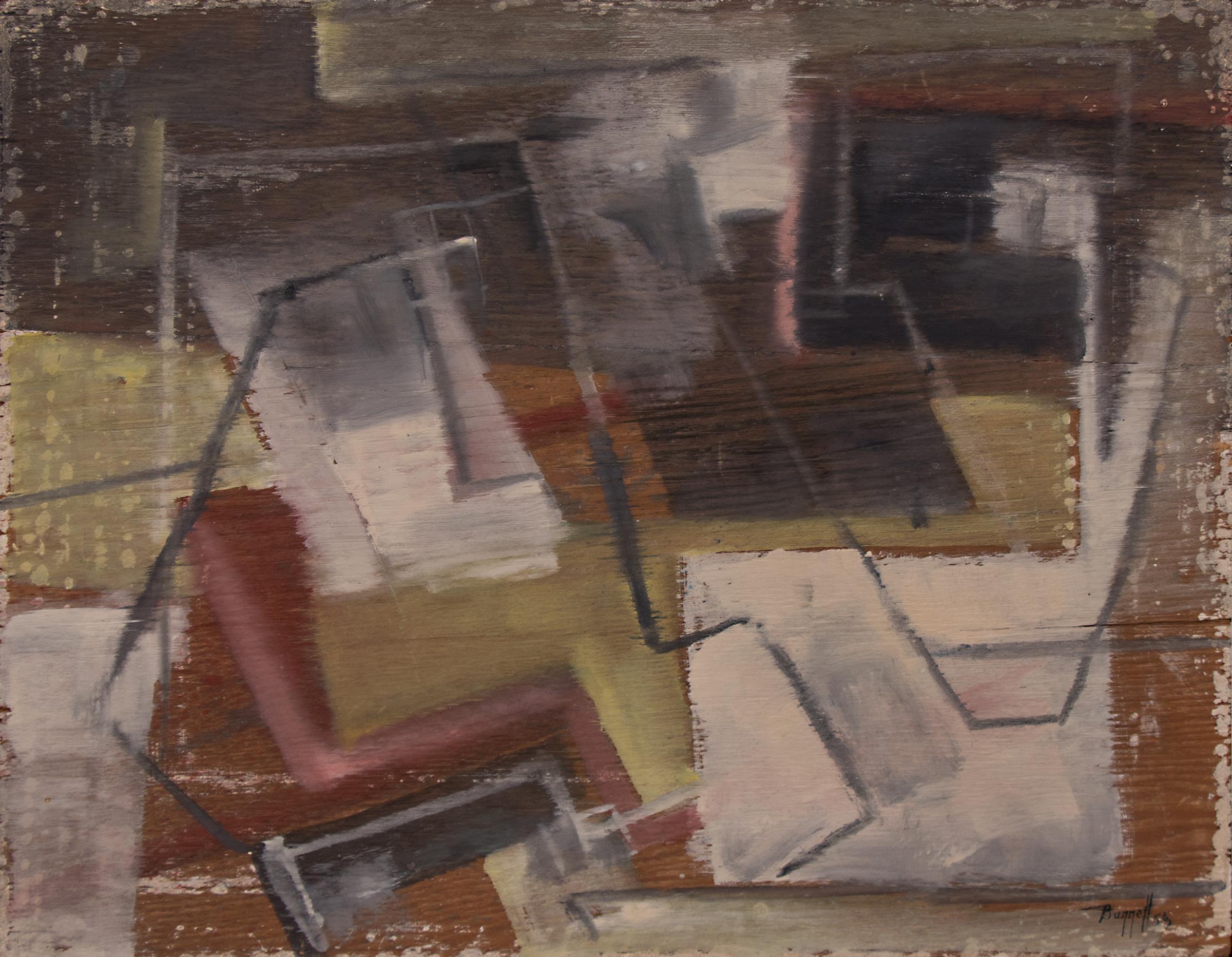 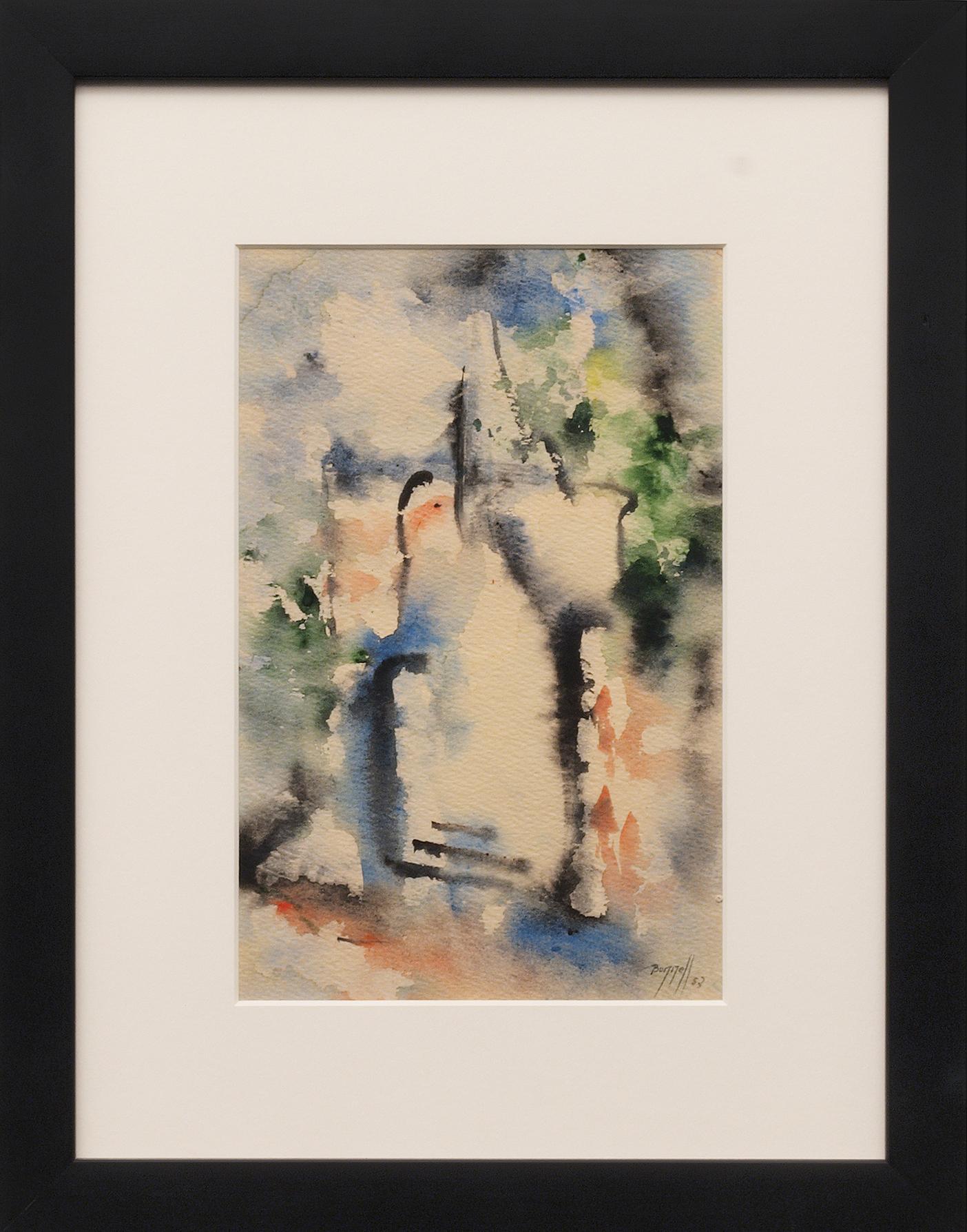 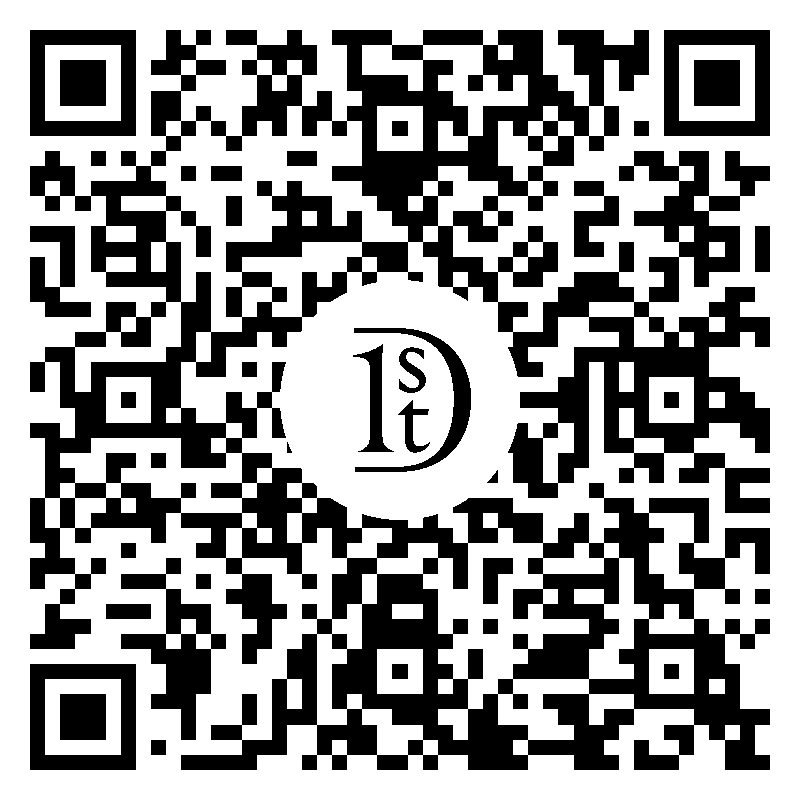 Semi-abstract, somewhat surrealist, vintage 1944 painting of a female figure giving birth painted during the artist's Black and Blue period. Watercolor and ink on paper, signed lower right, painted in colors of black, white and gray. Presented in a custom frame. Outer dimensions measure 30 ⅛ x 24 ⅛ x ¾ inches, image dimensions measure 20 ½ x 15 ¼ inches. Charles Bunnell developed a love for art at a very young age. As a child in Kansas City, Missouri, he spent much of his time drawing. When he was unable to find paper he drew on walls and in the margins of textbooks for which he was often fined. Around 1915, Bunnell moved with his family to Colorado Springs, Colorado. He served in World War I and later used his GI Training to study at the Broadmoor Art Academy (later renamed the Colorado Springs Fine Arts Center) during 1922 and 1923. In 1922, he married fellow student, Laura Palmer. He studied with Ernest Lawson in 1927-1928 and, in the winter of 1928-1929, he served as Lawson’s assistant. In the late 1920’s, the Bunnell’s settled just west of Colorado Springs and 1928, they welcomed the first of their three children. Their one-acre homesite, which they referred to as “Old Home Place”, was situated between two sets of railroad tracks at the foot of Pike’s Peak. Charlie converted an old railroad boxcar into his studio, where he later gave lessons. Beginning in 1931, Bunnell spent a year and a half studying under Boardman Robinson. The two men clashed constantly due to a generation gap and markedly different philosophies. Robinson encouraged his students not to stray from realism and though Bunnell mastered Robinson’s preferred style of American Scene painting, he regularly irritated his professor with his abstract sketches. Bunnell taught at the Kansas City Art Institute during the summers of 1929, 1930, 1940, and 1941. Between 1934 and 1941, he painted and taught under federal projects which included assisting Frank Mechau on murals for the Colorado Springs Post Office. However, he did not take to mural making and, after criticism from Boardman Robinson about his use of “heavy daubs which have no place in mural work,” he abandoned mural-making altogether. By the late 1930’s, Bunnell’s work departed from the American Scene/Modernist style he was trained in towards abstraction. This is marked by his “Black and Blue” series, consisting of 83 abstracted ink and watercolors. Affected by the Second World War and the loss of his 10-year old son, Bunnell’s work of the early 1940’s took on a Transcendental and Surrealist tone. The works from this period are moody and readily reflect the political and personal turmoil experienced by the artist. In the late 1940’s, Bunnell began experimenting with Abstract Expressionism. He alone is credited with introducing Colorado Springs to the new style as it was excluded from the Fine Art Center’s curriculum by Boardman Robinson. Bunnell excelled in Abstract Expressionism and continued to evolve in the style through the 1950’s continuing to his death in 1968. He was recently recognized as a premier American Abstract Expressionist by his inclusion in the book American Abstract Expressionism of the 1950’s: An Illustrated Survey. ©David Cook Galleries, LLC

1stDibs Buyer Protection Guaranteed
If your item arrives not as described, we’ll work with you and the seller to make it right. Learn more
About the Seller
5 / 5
Located in Denver, CO
Gold Seller
These expertly vetted sellers are highly rated and consistently exceed customer expectations.
Established in 1979
1stDibs seller since 2013
160 sales on 1stDibs
Typical response time: 12 hours
More From This Seller

Prepare
By Jesse Lambert
Located in New York, NY
ink and watercolor on paper, 42&quot;x 42&quot; available framed This painting is from as series of ink and watercolor paintings that depict ad-hoc structures, similar to tree hous...
Category

$5,800
Four brides - Watercolor on Paper Figurative Abstract Art
Located in Nuenen, Noord Brabant
Anton Heyboer (1924-2005) was a very excentric and wellknown artist from the Netherlands. He became famous for the turbulant life he lived and especially for the fact that he had fou...
Category

$596 Sale Price
24% Off
The Four Evangelists, Figure colorful Abstract
By Carl Dimitri
Located in Brooklyn, NY
In a way, it is a collision of opposites. Two canvases combined to one frame.
Category