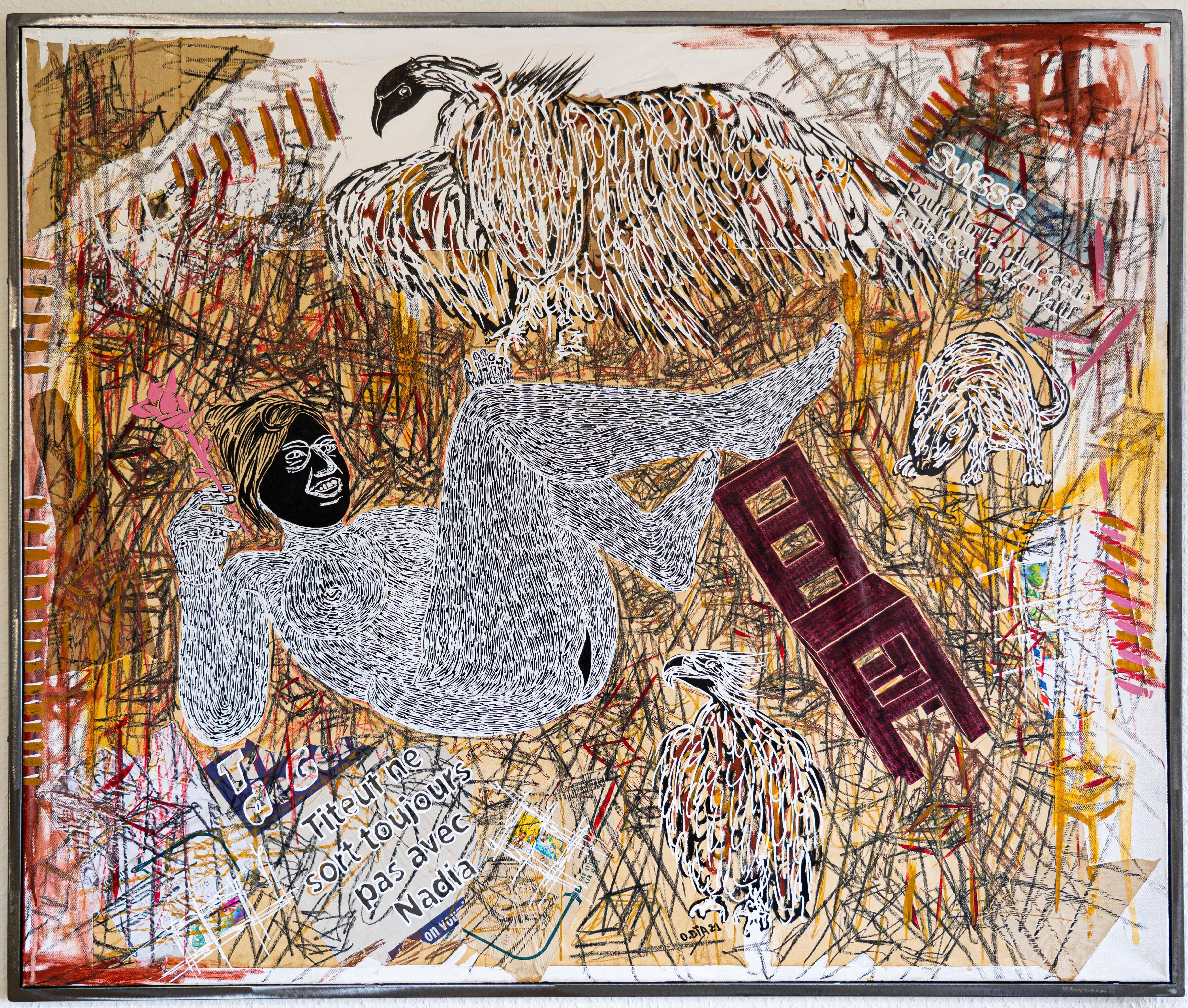 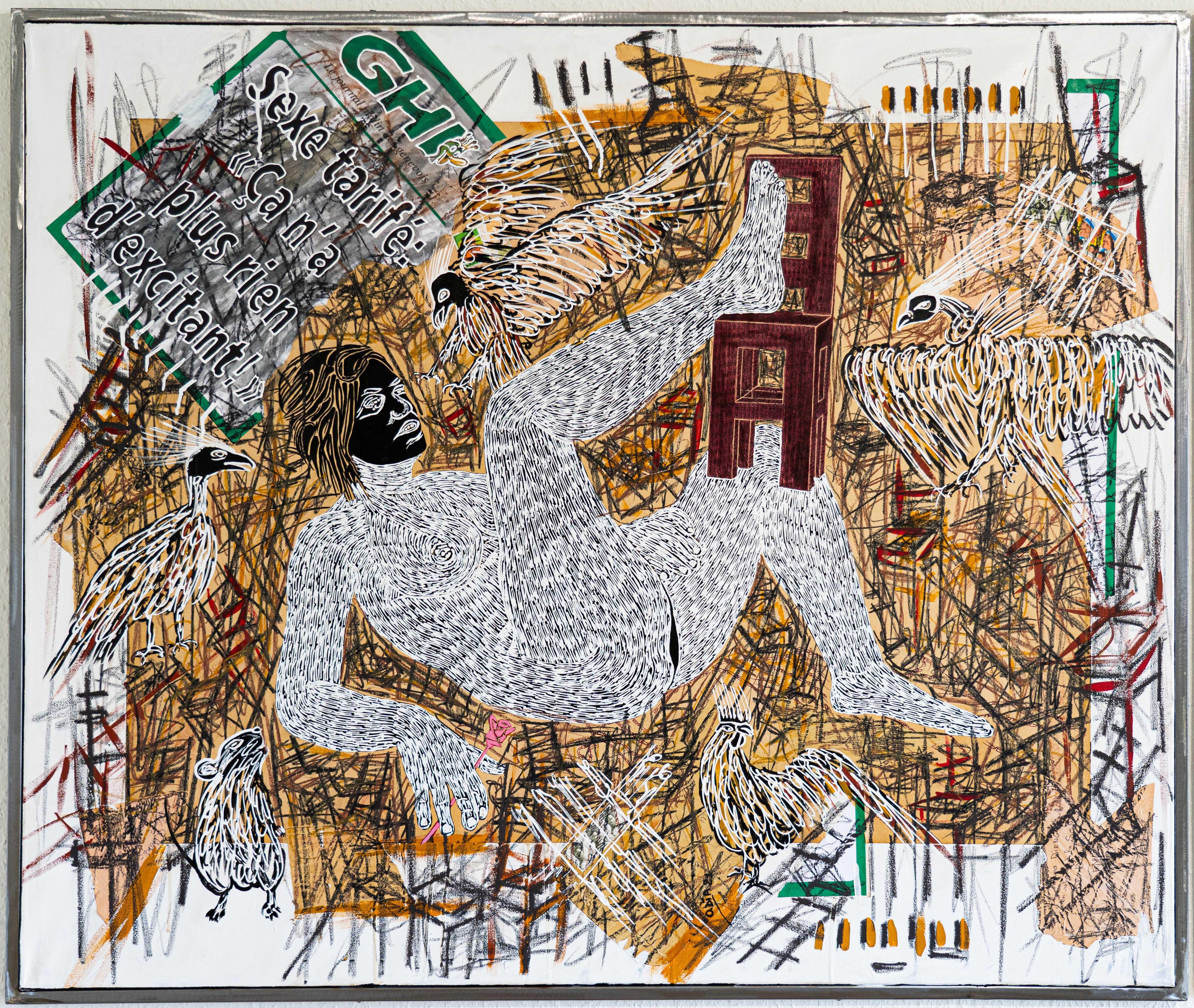 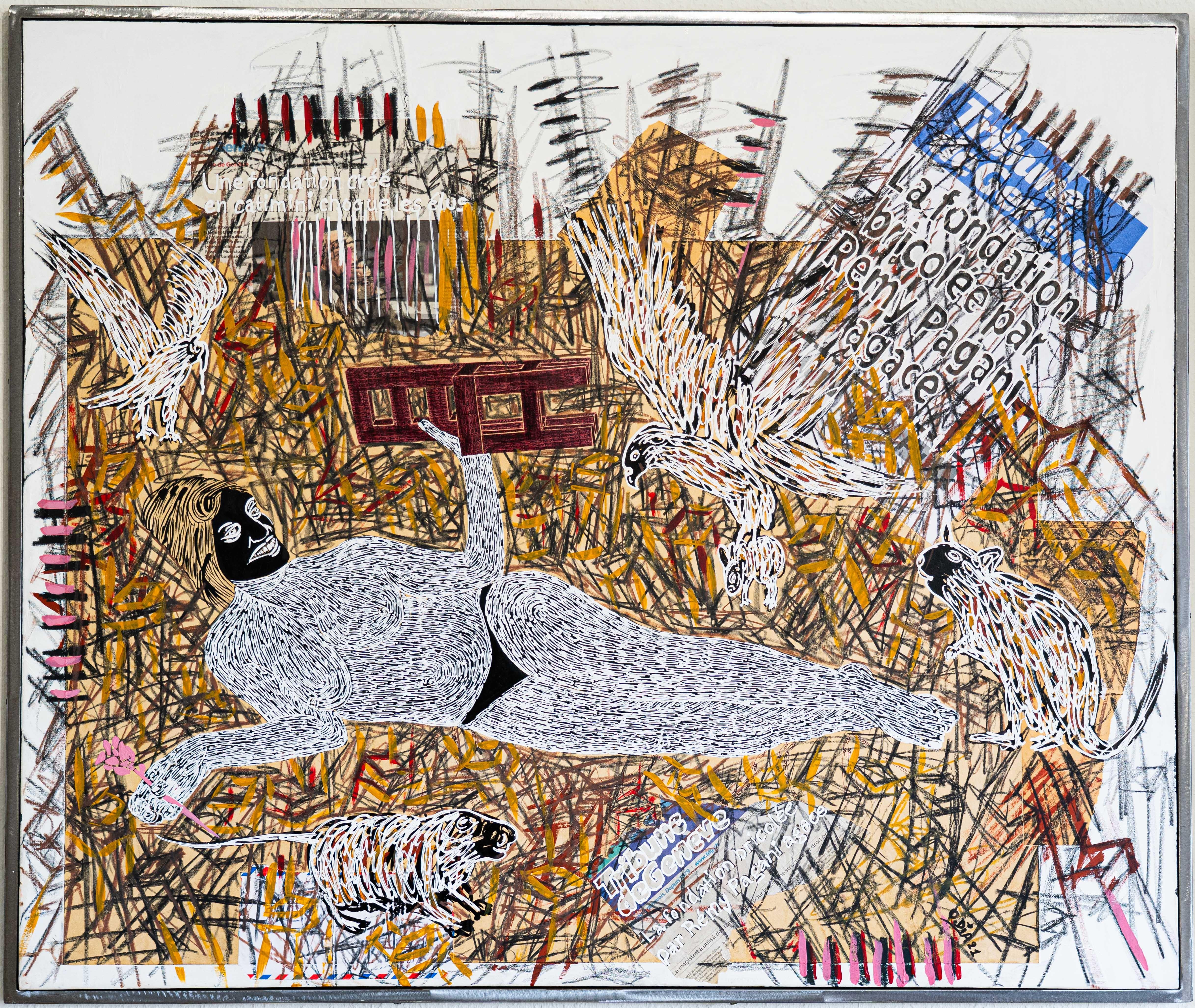 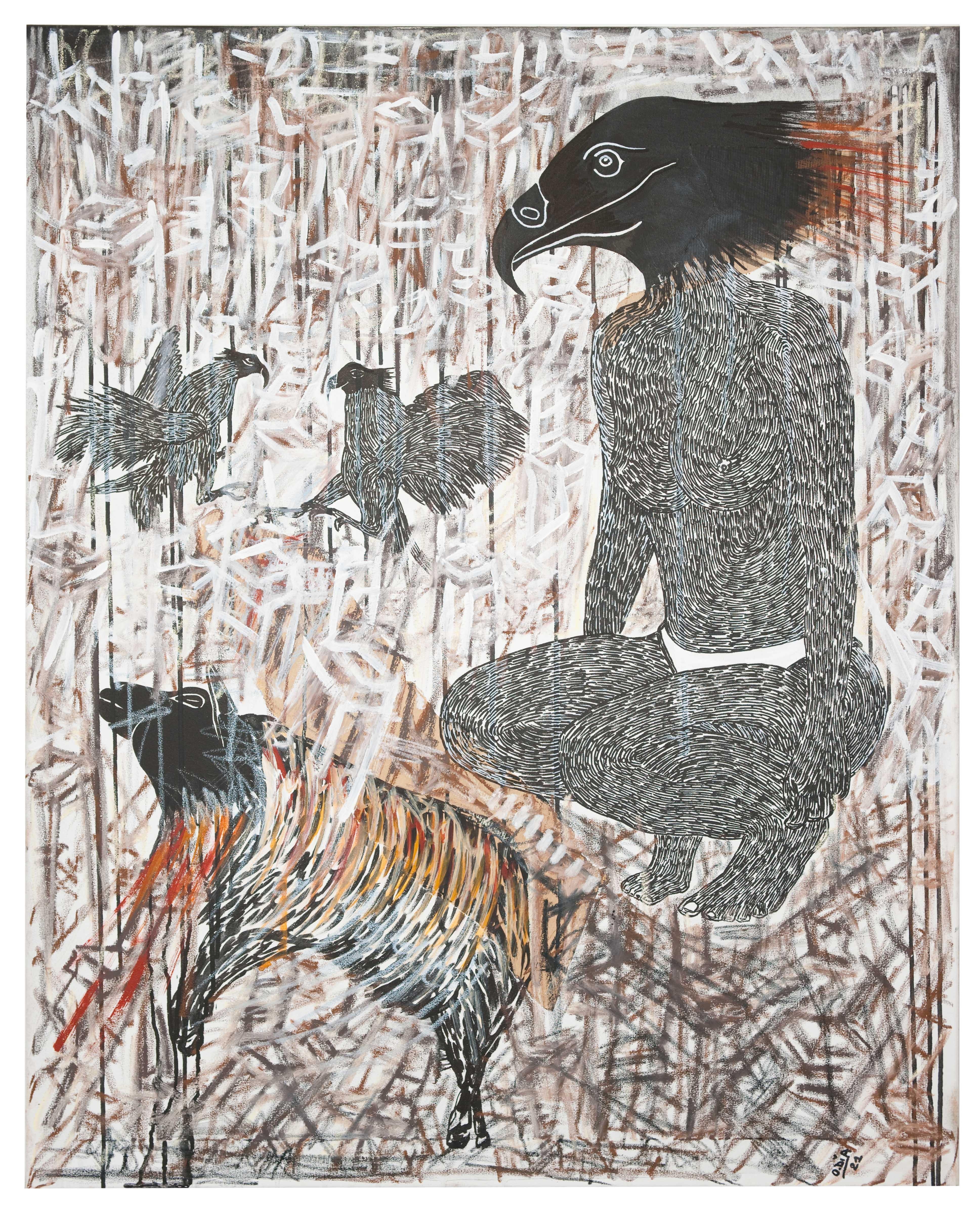 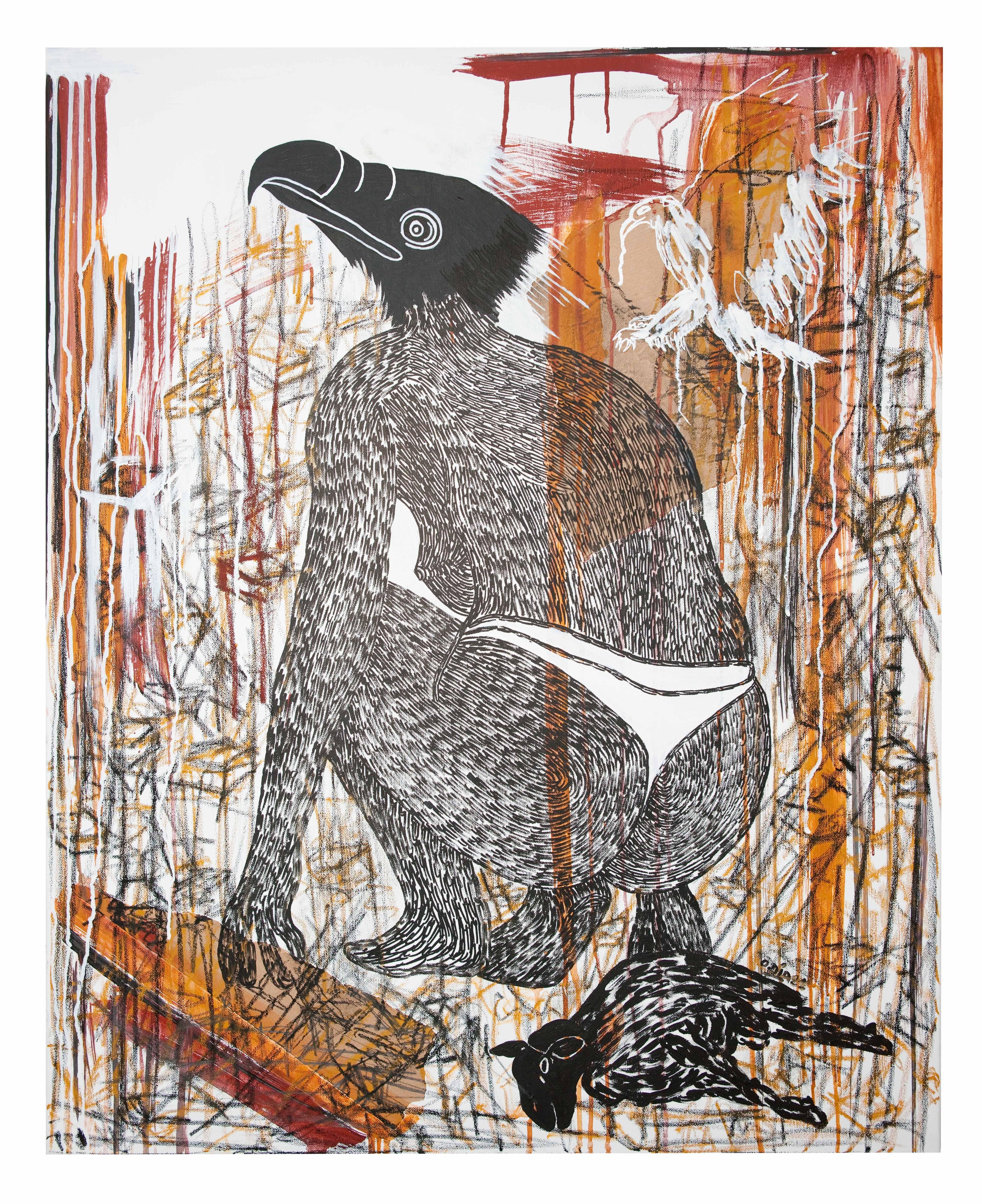 Senegalese and Swiss visual artist, visual arts teacher, Ousmane DIA has been living and working in Geneva for more than 22 years. A graduate of the National School of Fine Arts in Dakar, he completed his studies with a post-graduate degree in sculpture at the Ecole Supérieure d'Arts Visuels de Genève and graduated in 2001. A chair. Another chair! Another chair? And then another one and two more and ten more. A ribbon of chairs, large, small, vertical, horizontal, isolated or stacked in straight columns where the curve defies balance. The artist Ousmane DIA has chosen the symbol of this palliative to the fatigue of standing, to make it a kind of favorite totem pole which, in two or three dimensions, scatters his work in a recurring if not permanent way. The artist, in full maturity, pushes further the metaphor about this object of our daily life, whose banality makes us forget the chains upon ideas which it tends to arouse. From a man fulfilled, both morally and materially, one will say that he is seated, and well seated, the chair is also the throne, the place of predilection of the one who commands, who gives orders and who is respected. The standing position can prove to be tiring in the long run; the lying position makes one too vulnerable and does not give a beautiful image of oneself in the abandonment it suggests. Sitting is the intermediate position, the sitting position is the one that both rests and prepares for action, for rapid intervention. Because it allows ease, it is more comfortable than the standing position which is that of those who receive orders and because it allows domination, both psychological and physical, it overlooks those who are prostrate or lying down. Because it allows rest from fatigue, the chair is also the one that welcomes, that saves, those exhausted by their race against time and against life; it is a symbol of welcome, openness, meeting and sharing. In three dimensions, the chair is immediately noticeable as such and the artist has made it the main theme of his work, which can be found in several public spaces in both countries. But it can also be found in a less immediately perceptible form in the -too rare- canvases also produced by Ousmane DIA, of which a few fine examples are here submitted for our appreciation. Since 1999, Ousmane DIA has taken part in numerous individual and group exhibitions in Switzerland, Senegal, France and the United States in particular. The works of Ousmane DIA challenge by their relative ease of approach and yet... the harmony and balance undergoing the assault of time and rust with such mastery should not make the public forget that the breaking point so close is only improbable by the will of the artist. The works of Ousmane DIA are rooted in the lived experience and often echo current events. Ousmane works the chair, tirelessly, meticulously at the same time. In his work, the chair has become omnipresent. First a formal research, it becomes an obsession. It is the artist's palette. In the latest works of Ousmane DIA, the chair is at ease. It swirls, it dances, it testifies, it affirms.

$6,000 Sale Price
25% Off
Craig (Nude on Green), Mixed media on grey parchment paper
By Howard Tangye
Located in London, GB
Howard Tangye (b.1948, Australia) has been an influential force in fashion for decades. Lecturing at London’s Central Saint Martins for 35 years, including 16 years as head of BA Wom...
Category

$1,287
Showgirl, nude portrait of performer, green and red, mixed media on panel
By Deirdre O'Connell
Located in New York, NY
The initial drawings began as many drafts on paper that I photographed on my iPad, worked on with a painting app, printed out, drew over again and finally cut out and glued onto wood...
Category

$1,600
Silver Eve, mixed media portrait of woman with flowers, neutral colors
By Deirdre O'Connell
Located in New York, NY
The initial drawings began as many drafts on paper that I photographed on my iPad, worked on with a painting app, printed out, drew over again and finally cut out and glued onto wood...
Category

$1,850
White Queen, mixed media portrait of nude woman with feather headpiece
By Deirdre O'Connell
Located in New York, NY
The initial drawings began as many drafts on paper that I photographed on my iPad, worked on with a painting app, printed out, drew over again and finally cut out and glued onto wood...
Category

$1,850
Matador, mixed media portrait of nude woman in dark garden
By Deirdre O'Connell
Located in New York, NY
The initial drawings began as many drafts on paper that I photographed on my iPad, worked on with a painting app, printed out, drew over again and finally cut out and glued onto wood...
Category