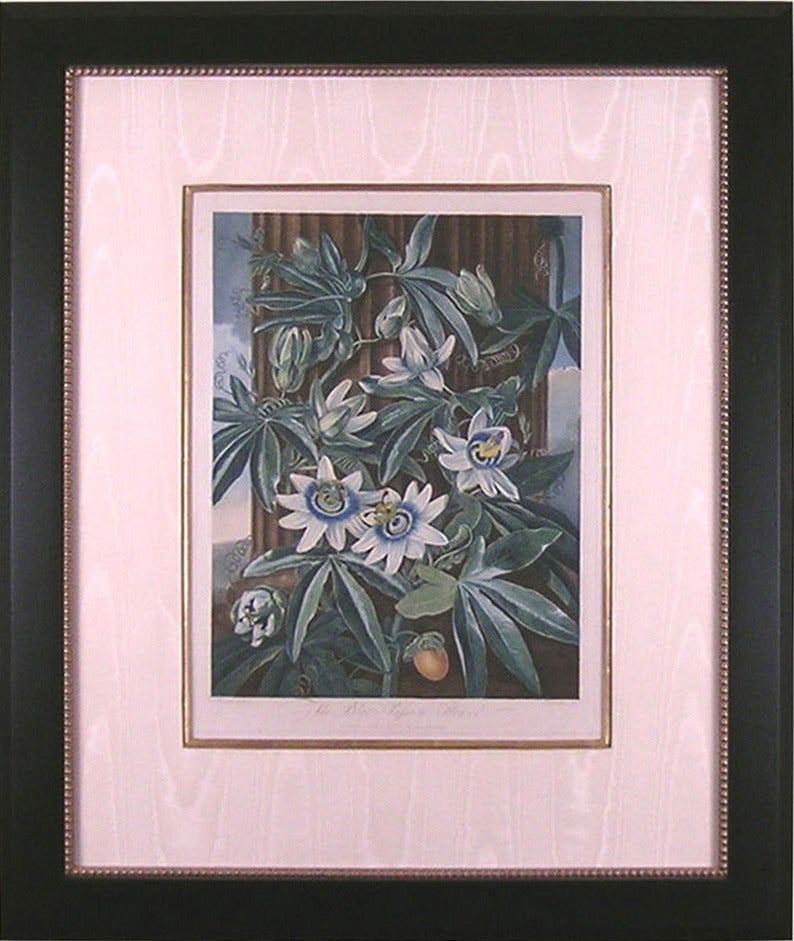 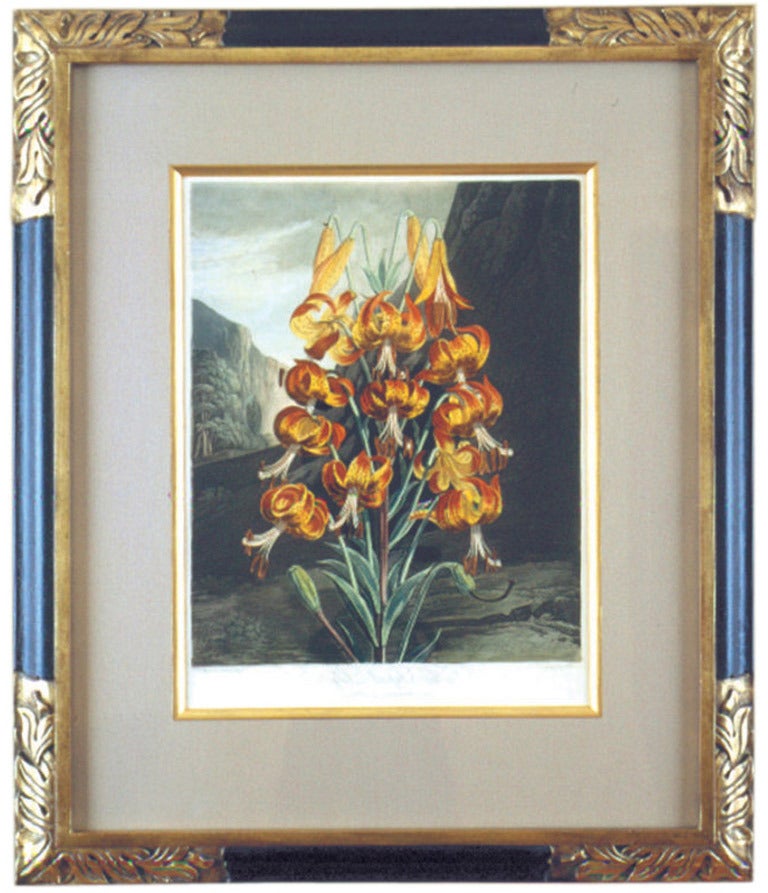 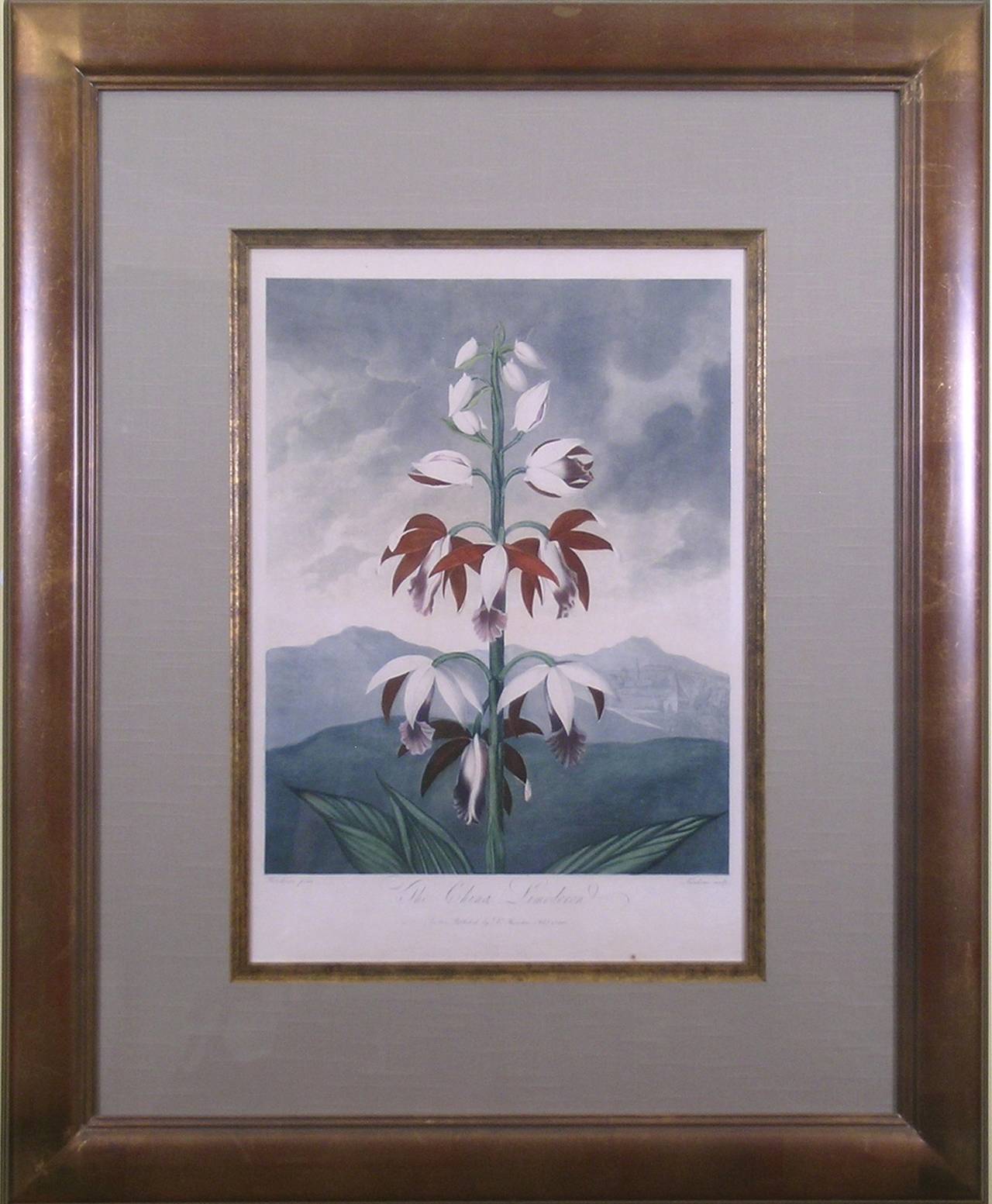 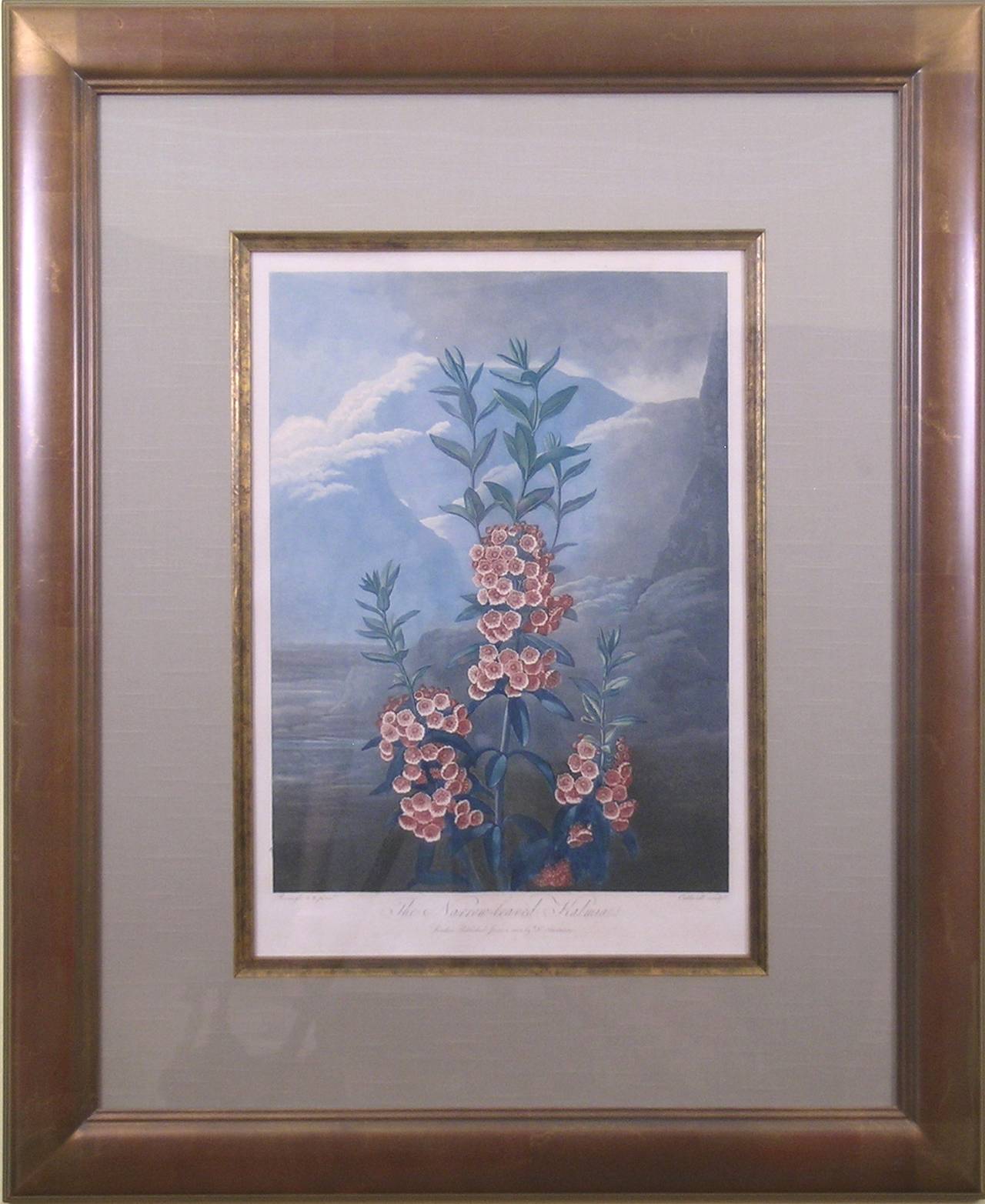 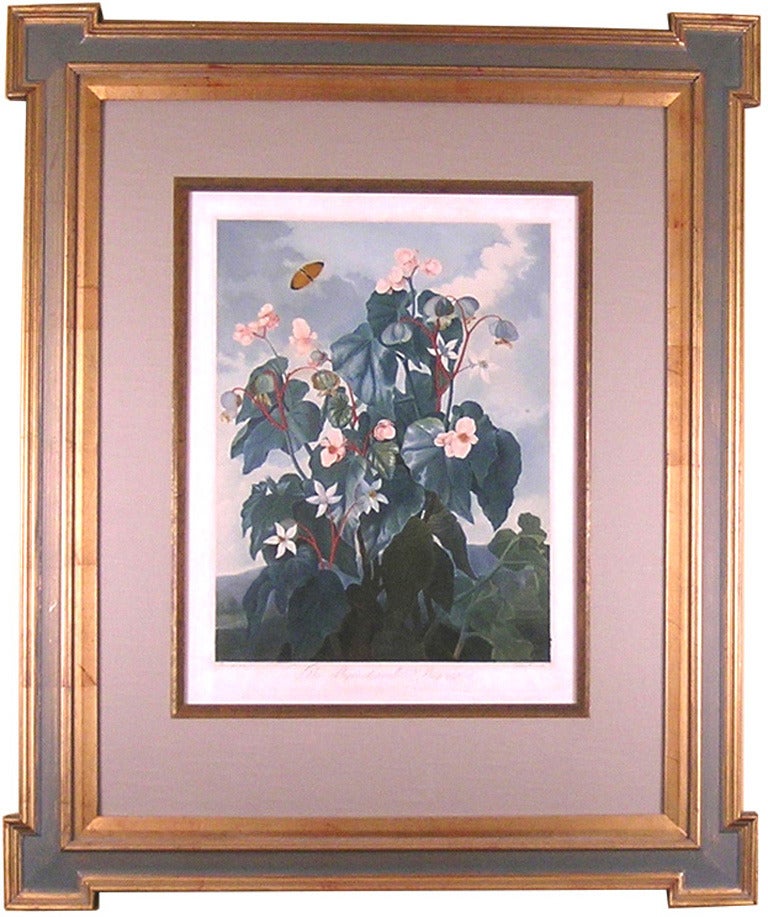 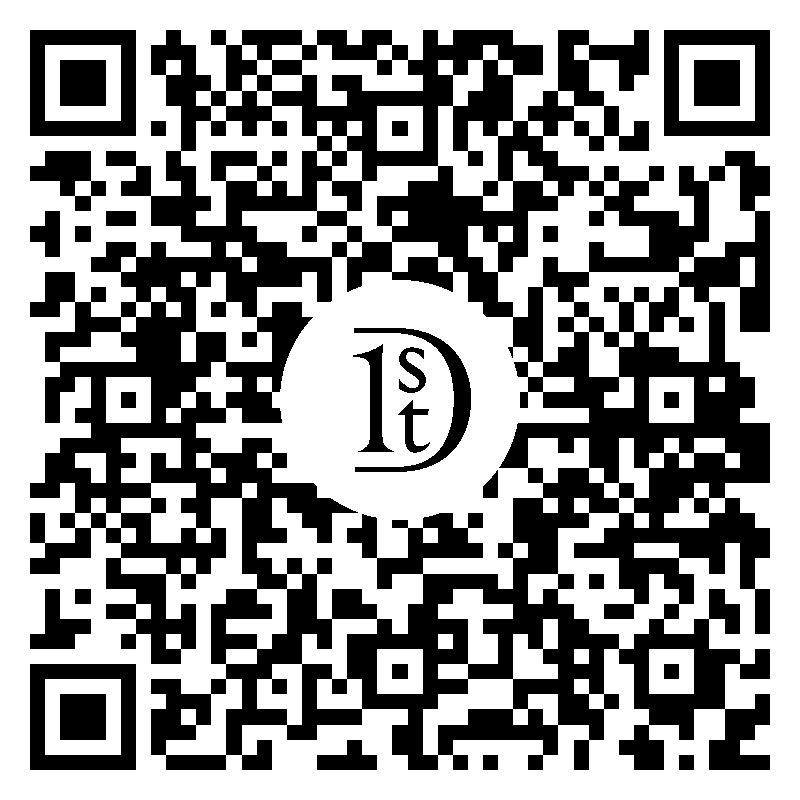 DR. ROBERT JOHN THORNTON (c1765 – 1832). The Temple of Flora. London, 1798-1810. Painted by Reinagle, Henderson, Pether, et. al. Engraved by Ward, Caldwall, Earlom, et. al. Aquatint, mezzotint, and/or stipple engraving finished by hand. Approximately 17.75” x 22.5” Unframed. 5 frontice pieces, 32 plates; generally 29-30 per volume, 1 or more frontice pieces. As a boy, Robert John Thornton (d.1837) demonstrated his love of natural history with his own botanical garden and an aviary, which contained every species of English hawk, most of them captured by himself. He took his Cambridge M.B. and, following in his father's footsteps, set up practice as a London doctor. Upon inheriting the family fortune in 1797, Thornton desired to leave his mark on the world in the form of a massive work dedicated to Carolus Von Linnaeus, the great Swedish naturalist. For his own aggrandizement and that of his beloved England, Thornton wished it to surpass in scope, illustration, paper, and topography any publication produced in any other European country. He felt he was engaged upon "a national undertaking", and dedicated this homage of philosophic and literary distinction to Queen Charlotte. It was to be titled The Temple of Flora; or Garden of Nature Picturesque Botanical Plates of the New Illustration of the Sexual System of Linnaeus. Desiring the national glorification of botany and its alliance with the arts of painting and engraving, Thornton was the first person to juxtapose landscape backgrounds with his floral subjects. He opened an art gallery of the paintings from which the prints were made and subscriptions for the forthcoming books were sold. Copies of the work were sent to the Queen and Prince Regent, and to the Emperor of Russia, who sent Thornton a ring in acknowledgment of the "splendid and elaborate Botanical works." The Thornton prints, originally to number seventy in all, were barely published in an edition of thirty at the author's expense between the years 1799 and 1807. Despite his efforts, Thornton was unable to succeed financially. Technically The Temple of Flora, as it came to be known, was not a success due to botanical inaccuracies and rather insipid text all based on Thornton's aesthetic sense. However, it is the forceful stylization of flowers, together with their historical, allegorical and fanciful backgrounds that place The Temple of Flora among the greatest botanical books of all time. Though Thornton actually painted only one picture used for the engravings in his Temple, "The Roses", he literally directed his flower pictures. He chose the plants, arranged the symbolism and the backgrounds. For example, in the "Night-Blowing Cereus" the moon illuminates the turret clock, which has just struck midnight, the hour when this flower is fully open. Henderson, Reingal, Edwards and Pether are among the artists hired by Thornton to work on the flower designs and their backgrounds. Many times they would collaborate, as in the aforementioned "Cereus" where it states "The Flower by Reinagel, Moonlight by Pether". These plates were executed by the likes of Bartolozzi and other English master engravers and are a varied combination of mezzotint, aquatint, stipple engraving and finished in watercolor by hand. The text, primarily composed by Thornton, was lengthy, somewhat fanciful and included rather exaggerated poetry. Thornton was a man of his era, a time of romanticism, when artistic tastes ran to the sentimental, symbolic, and dramatic. The flowers from the Temple of Flora are delightful examples of that style. In spite of tremendous public exposure and a dedication to Queen Charlotte, Thornton's venture was a financial disaster. While he attributed this to the continental war, no doubt his over-zealous attention to details, none too scientific, largely contributed to his failure. By 1811, Thornton was forced to petition Parliament for permission to set up a lottery. "An Act to enable Dr. Robert John Thornton to dispose of his collection of paintings, drawings and engravings, together with several copies of certain books therein mentioned, by way of chance" was passed in May of that year. Thus, the Quarto or Lottery edition of The Temple of Flora was published. This work, smaller in scale but not in romantic spirit, was to salvage Thornton's expenses for the original folio edition. Hoping to sell twenty thousand tickets at two guineas each, Thornton estimated the worth of his ten thousand prizes to be 77,000 pounds. This was a generous estimate as the complete sale of tickets would be worth no more than 42,000 pounds. Once again, Thornton's venture resulted in disaster. For the remaining years of his life, Thornton continued his medical practice with varying success, and attempted a brief, unhappy collaboration with the poet William Blake. Sadly when he died in 1837 his family was almost destitute. But despite these early failures, The Temple of Flora has now a permanent place as one of the greatest prizes of all time. Reference: Flower & Fruit Prints. Dunthorne. Da Capo Press. Washington, D. C., 1938. The Temple of Flora: Robert Thornton. King. Little, Brown and Company, NY, 1981.

1stDibs Buyer Protection Guaranteed
If your item arrives not as described, we’ll work with you and the seller to make it right. Learn more
About the Seller
5 / 5
Located in Florham Park, NJ
Gold Seller
These expertly vetted sellers are highly rated and consistently exceed customer expectations.
1stDibs seller since 2014
146 sales on 1stDibs
Typical response time: 1 hour
More From This Seller

$975
THORNTON. The Roses
By Dr. Robert John Thornton
Located in London, GB
Magnificent print by Robert John Thornton. Aquatint and mezzotint, printed in colour and finished by hand, heightened with gum arabic, from The Temple of Flora. [London 1799] First ...
Category

$11,753
THORNTON. The Superb Lily.
By Dr. Robert John Thornton
Located in London, GB
A magnificent print by Robert John Thornton; aquatint and mezzotint, printed in colour and finished by hand, heightened with gum arabic, from The Temple of Flora. [London 1799]. Fi...
Category

$8,319
THORNTON. The Tulips.
By Dr. Robert John Thornton
Located in London, GB
Aquatint and mezzotint, printed in colours and finished by hand, heightened with gum arabic, from The Temple of Flora. Framed and glazed. London, 1799-[1807]. Second state. Thornt...
Category