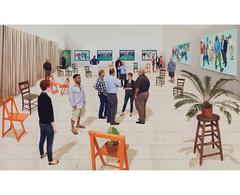 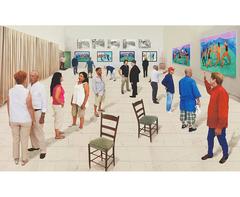 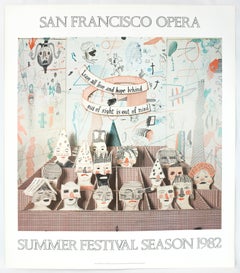 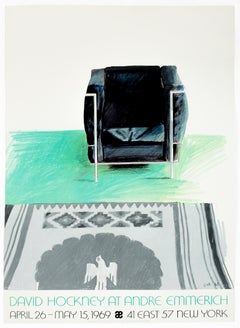 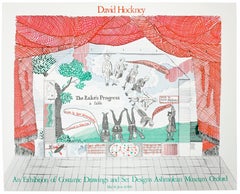 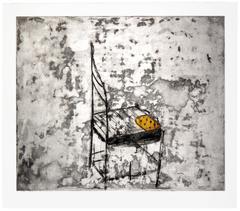 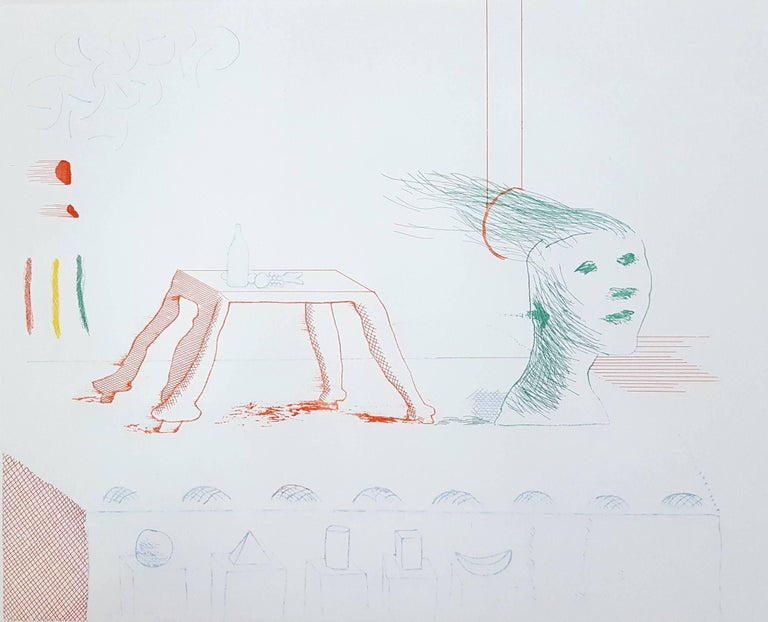 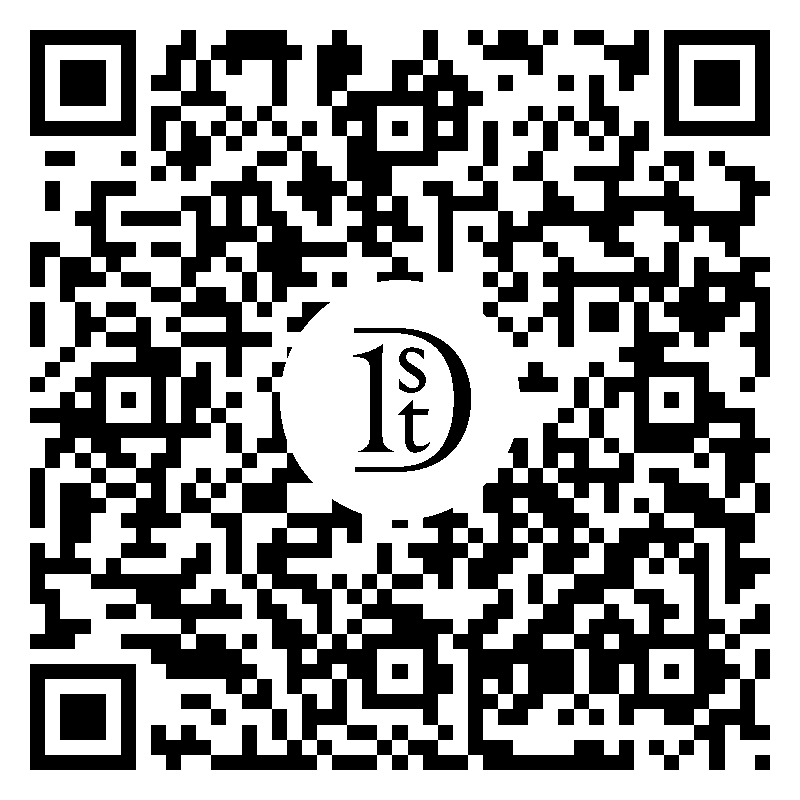 An original signed etching, softground etching, and aquatint on Inveresk wove paper by English artist David Hockney (1937-) titled "A Moving Still Life", 1977. Limited edition: 97/200. Hand pencil signed by Hockney lower right and numbered lower left. Stamped with the title lower center on verso. Printed from 2 copper plates in blue, red, yellow, and green. This is plate 18, from 'The 'Blue Guitar', 1976-1977 portfolio of 20 etchings, (eighteen with aquatint and one with drypoint). Printed by Jennifer Melby, New York, NY and published by The Petersburg Press, London, England in 1977. This work is in many permanent museum collections including the Museum of Modern Art in New York City and the National Gallery of Art in Washington D.C.. Reference: catalogue raisonne: "David Hockney Prints 1954-1995" (MOCA Tokyo) No. 195, page 193. Sheet size: 18.25" x 20.75". Image size: 13.75" x 16.75". In excellent condition. Rare. Known for his photo collages and paintings of Los Angeles swimming pools, David Hockney is considered one of the most influential British artists of the 20th century. Born in Bradford, England, in 1937, David Hockney attended art school in London before moving to Los Angeles in the 1960s. There, he painted his famous swimming pool paintings. In the 1970s, Hockney began working in photography, creating photo collages he called joiners. He continues to create and exhibit art, and in 2011 he was voted the most influential British artist of the 20th century.

The art of David Hockney is always engaging in its pleasant ambiguities: It’s warm but somehow aloof; filled with light yet often dark and brooding in subject; simple, frank and mundane, but also ethereal and complex. The artist’s stature in the contemporary- art world is such that, in a 2011 survey of one thousand British painters and sculptors, he was named the most influential British artist of all time.


Hockney grew up in Bradford, in the northern English county of Yorkshire, studying at the Bradford School of Art from 1953 to ’57, and at the Royal College of Art in London from 1959 to ’ 1962. Though he was educated in art a time when abstraction dominated the field, Hockney stuck resolutely to figurative painting and drawing. His early paintings suggest a search for a style, veering from Expressionism to a grotesquerie suggestive of James Ensor. But Hockney found himself almost the moment he arrived in Los Angeles, in 1963. The move from the gray and rainy Britain to a world of bright sunshine and sparkling water brought Hockney a sense of freedom and an artistic epiphany. He would spend most of the next five years in L.A., painting luminous pictures, such as A Bigger Splash (1967), of things that made him happy: swimming pools, manicured lawns, palm trees, stucco buildings and luxuries like shower stalls. Hockney also painted people, almost always his friends. His California portraits such as Beverly Hills Housewife (1966) are considered to be his finest work. They are at once grandly scaled, intimate and poetic.


In the 1970s, Hockney moved back to Britain and spent much of his time on photography and printmaking. He returned to painting in the 1980s, and to subjects like still lifes, seascapes and portraits. Hockney has always been fascinated by the use of technology in art — he’s credited with inventing the technique of joining Polaroid photos in a collage to form a panoramic picture — and in the past decade has been using the Brush app to paint on an iPad. Because he is prolific and works in a wide range of mediums, Hockney’s art is available at many price points. His consistently striking and provocative work should have a place in any comprehensive collection of contemporary art.

$225
La Comedie Humaine
(after) Pablo Picasso
1950s Cubist
Intaglio, Photogravure
View All from Seller
You May Also Like