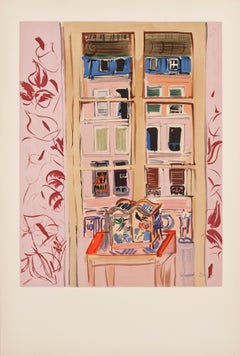 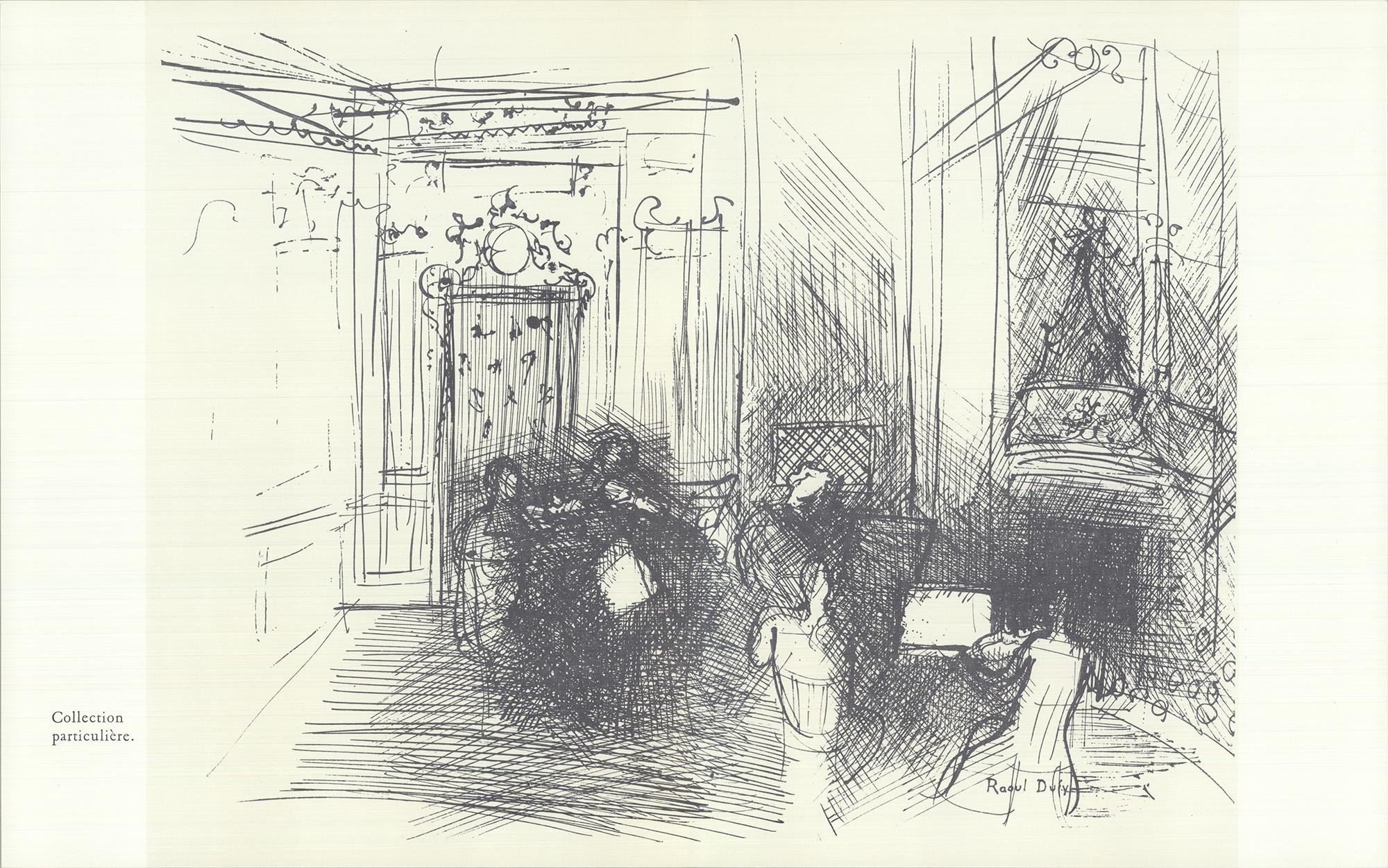 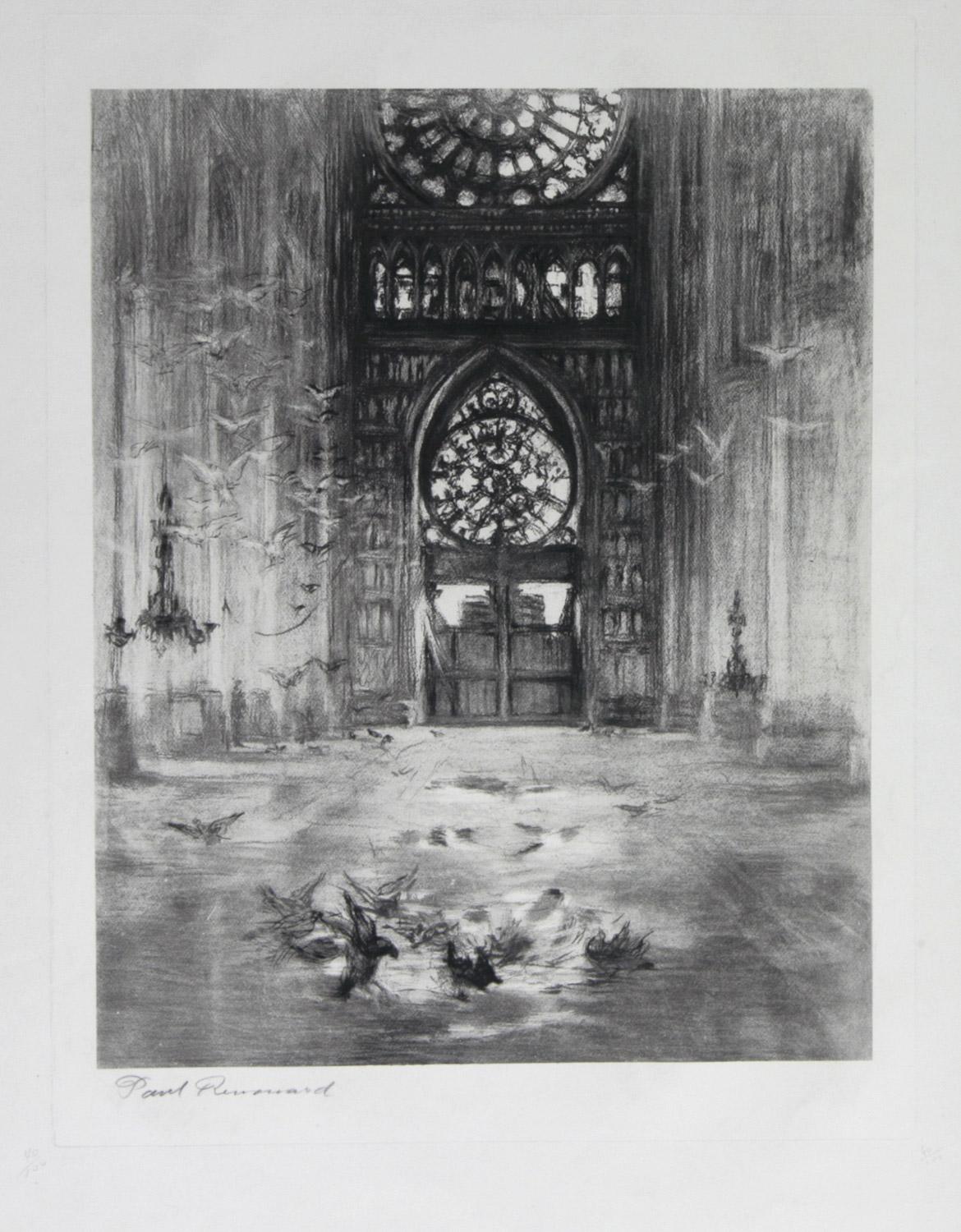 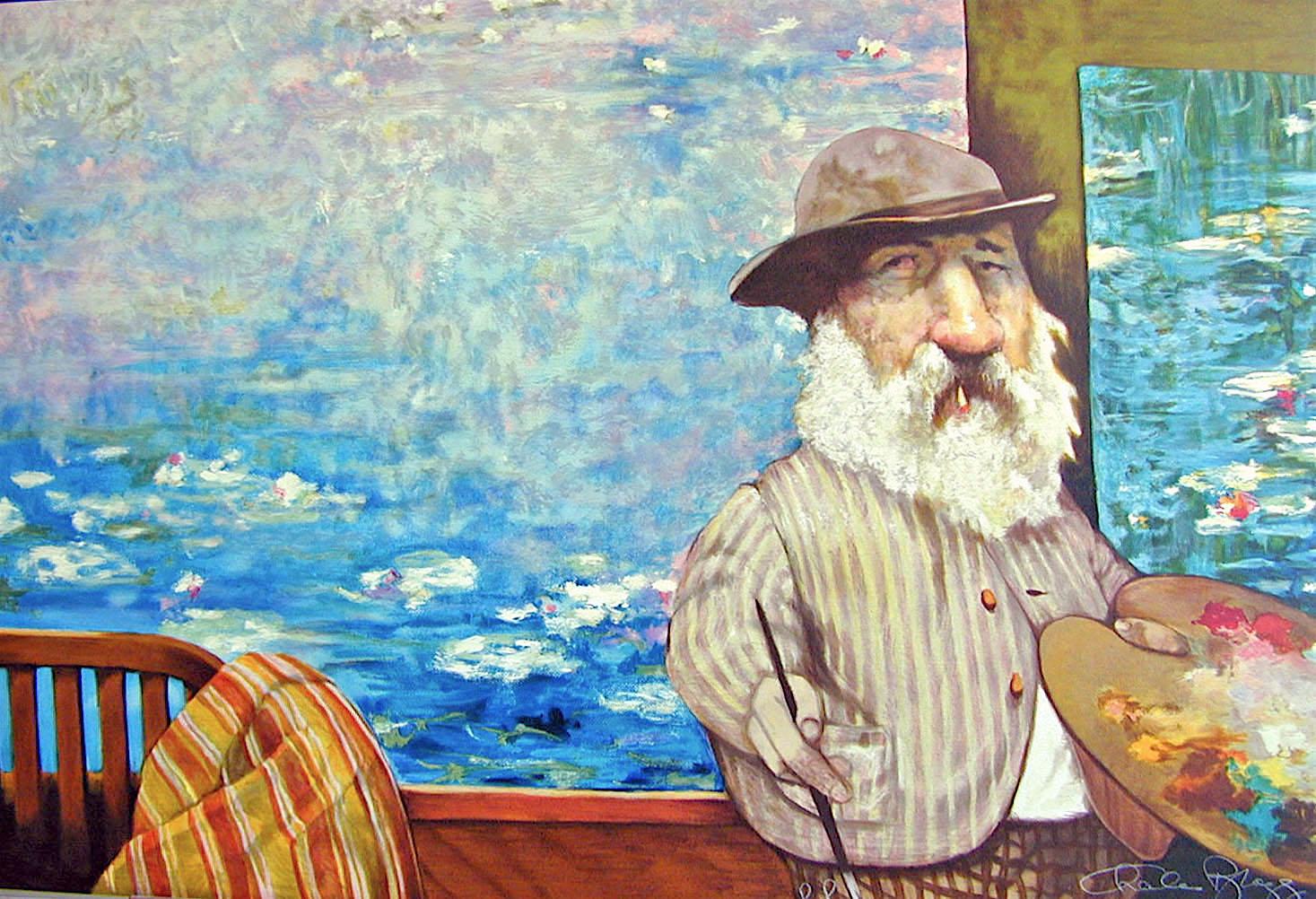 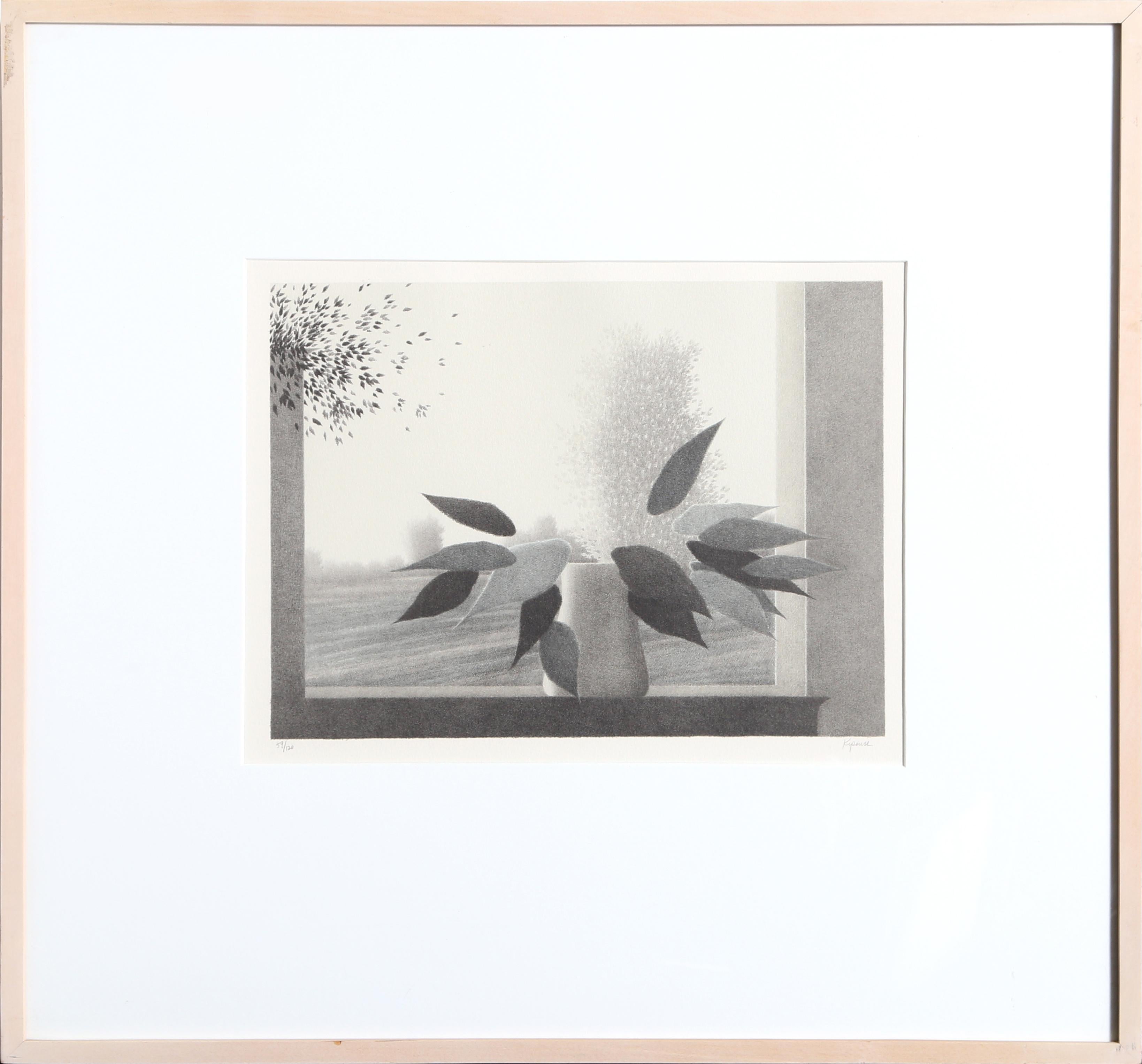 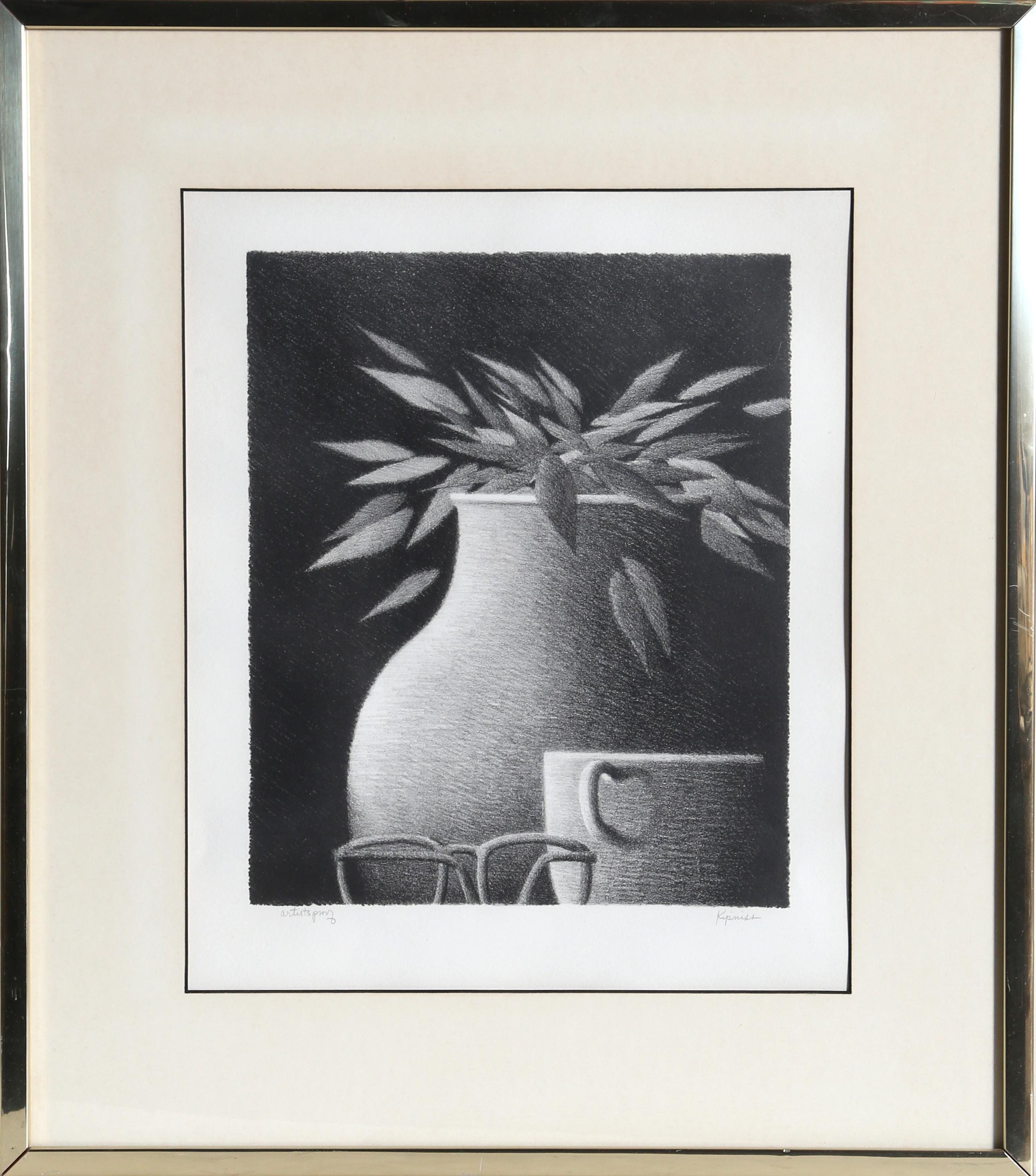 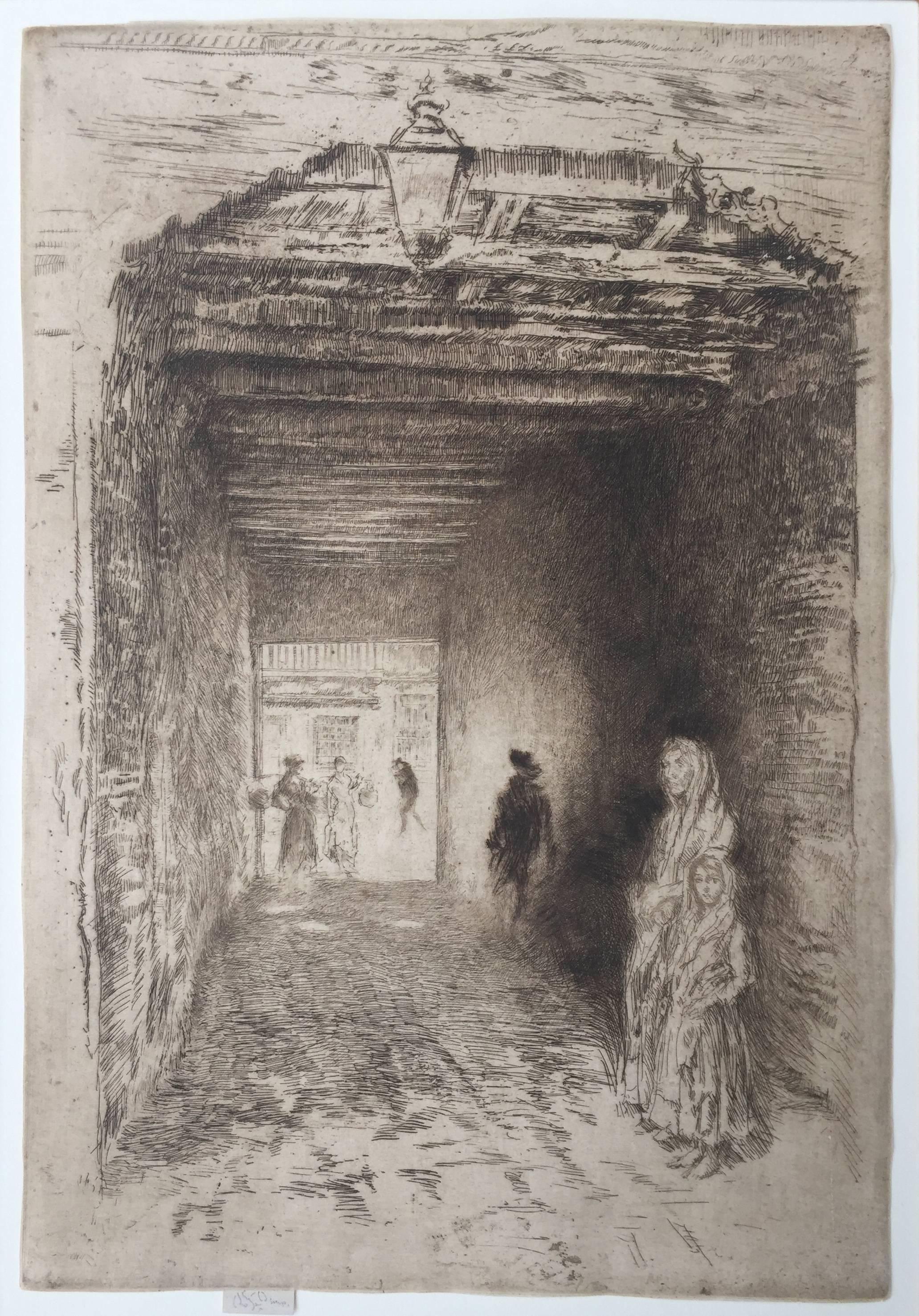 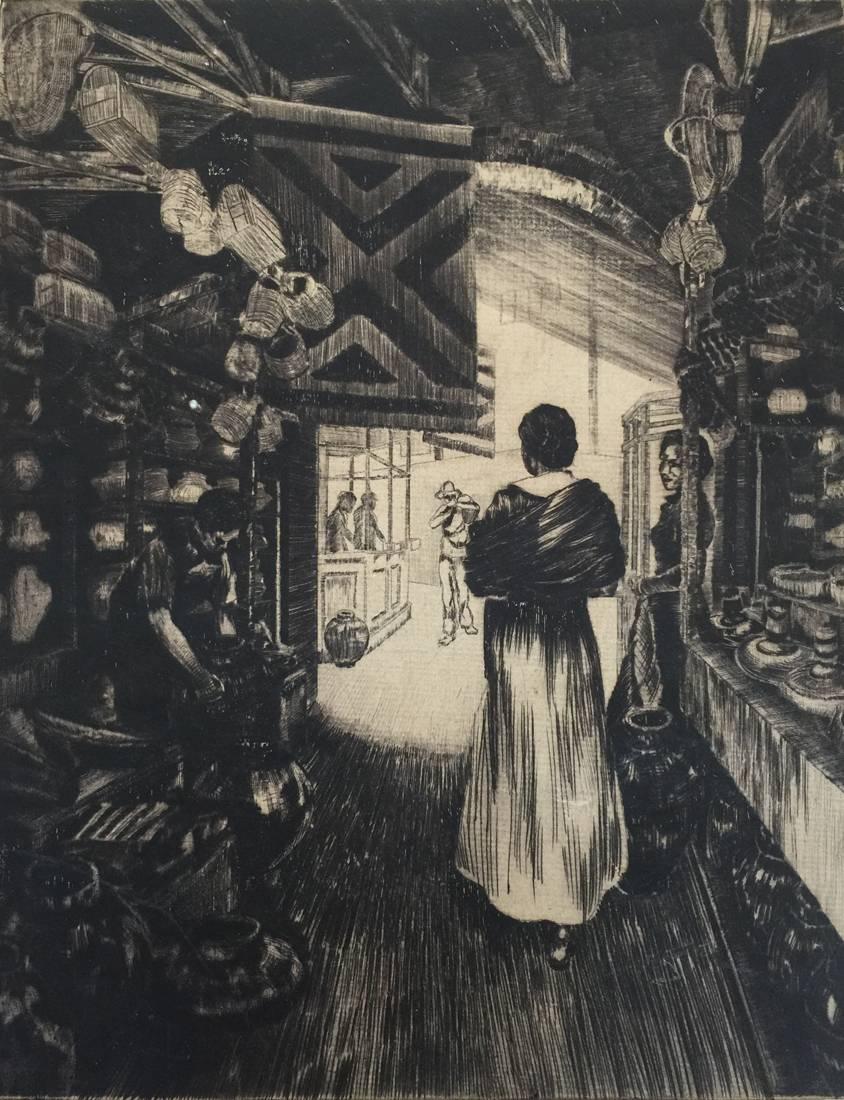 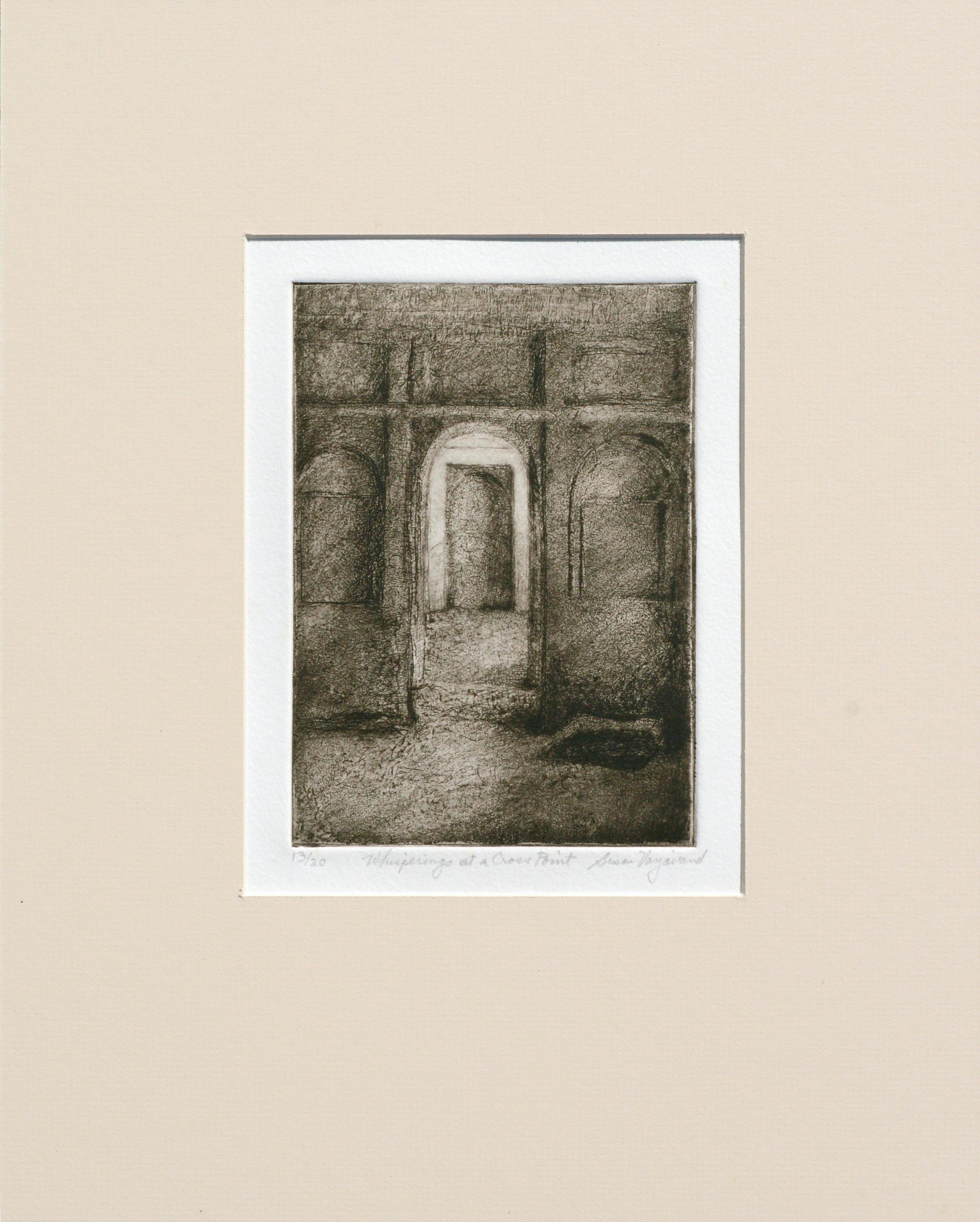 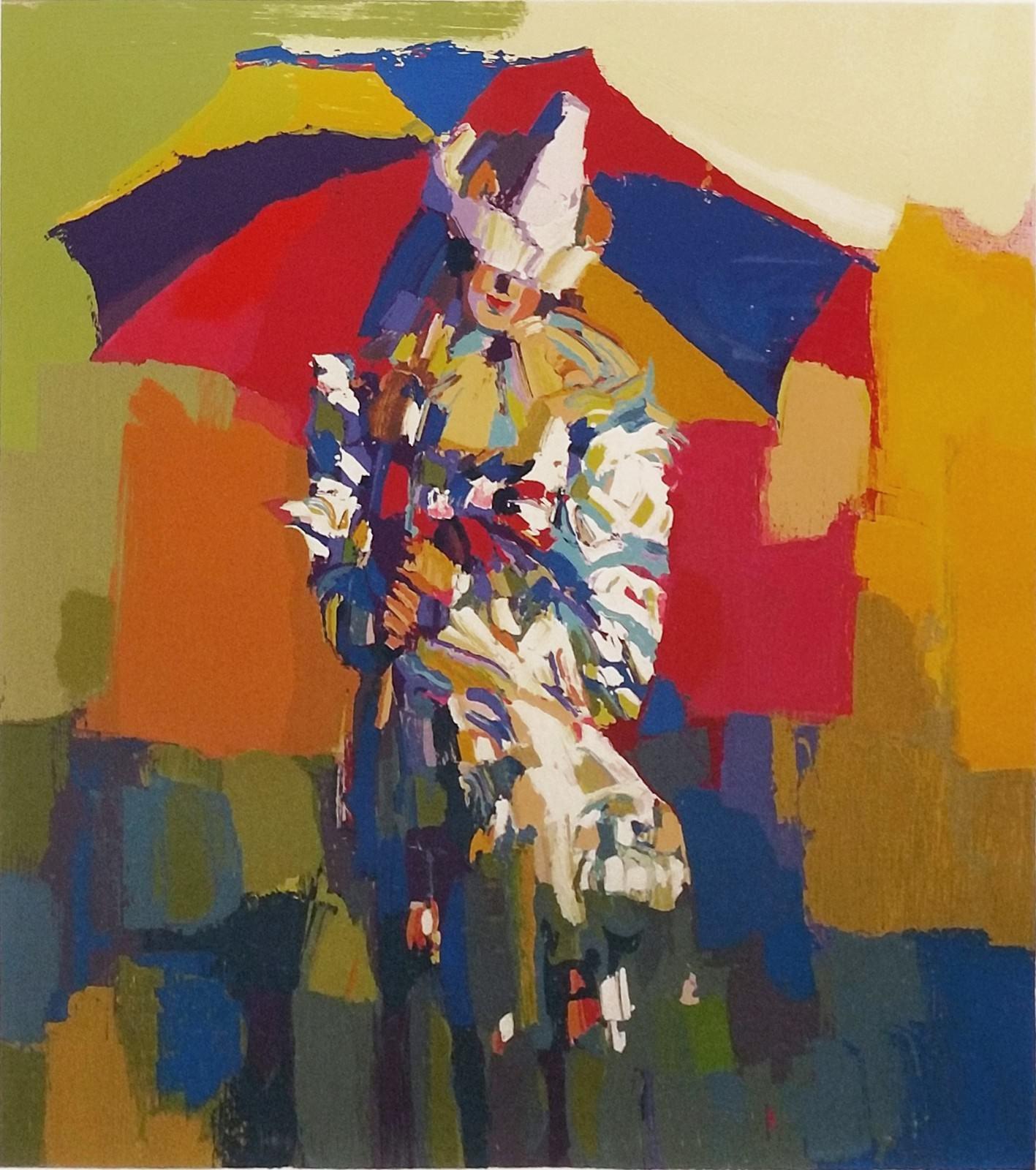 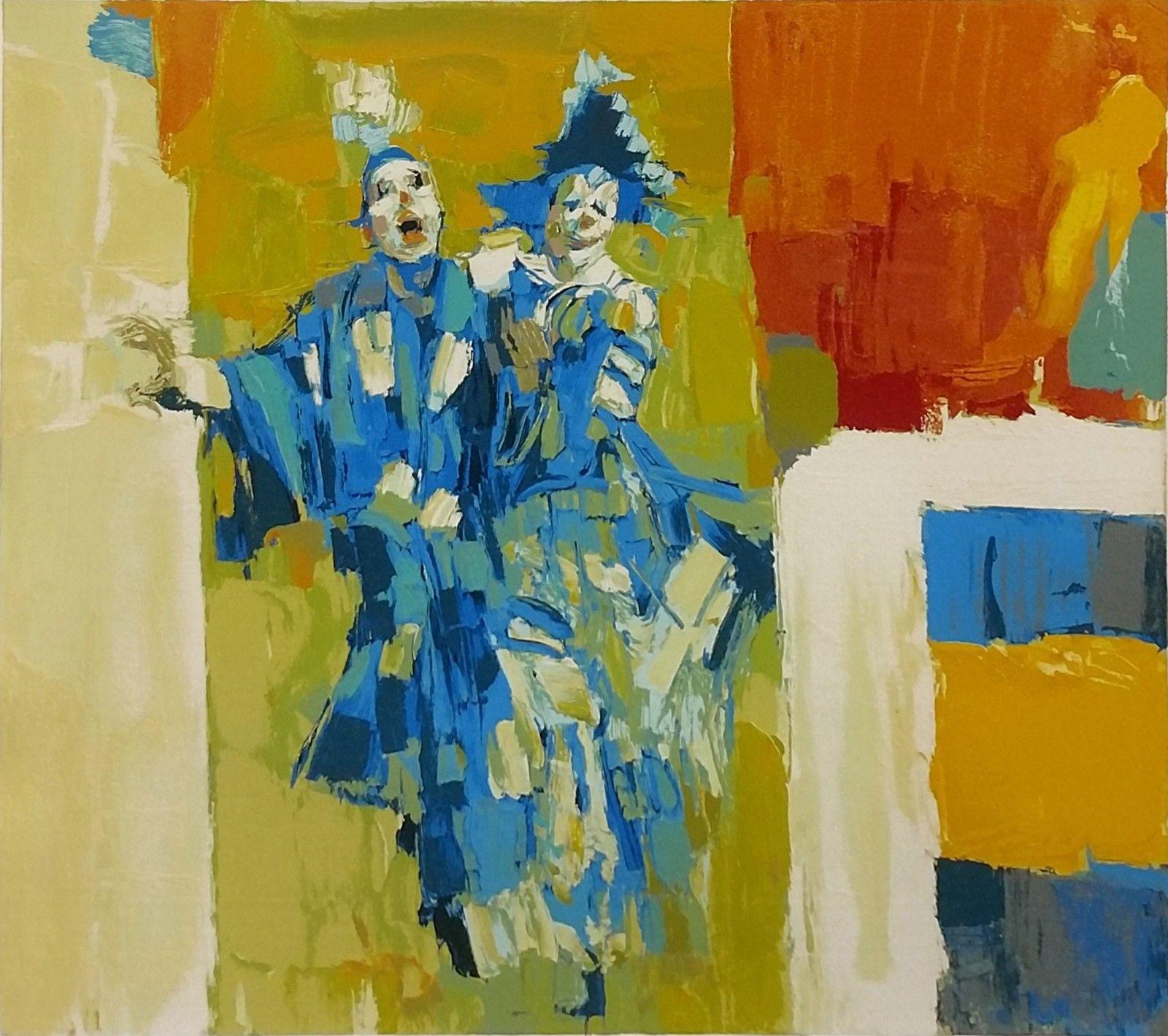 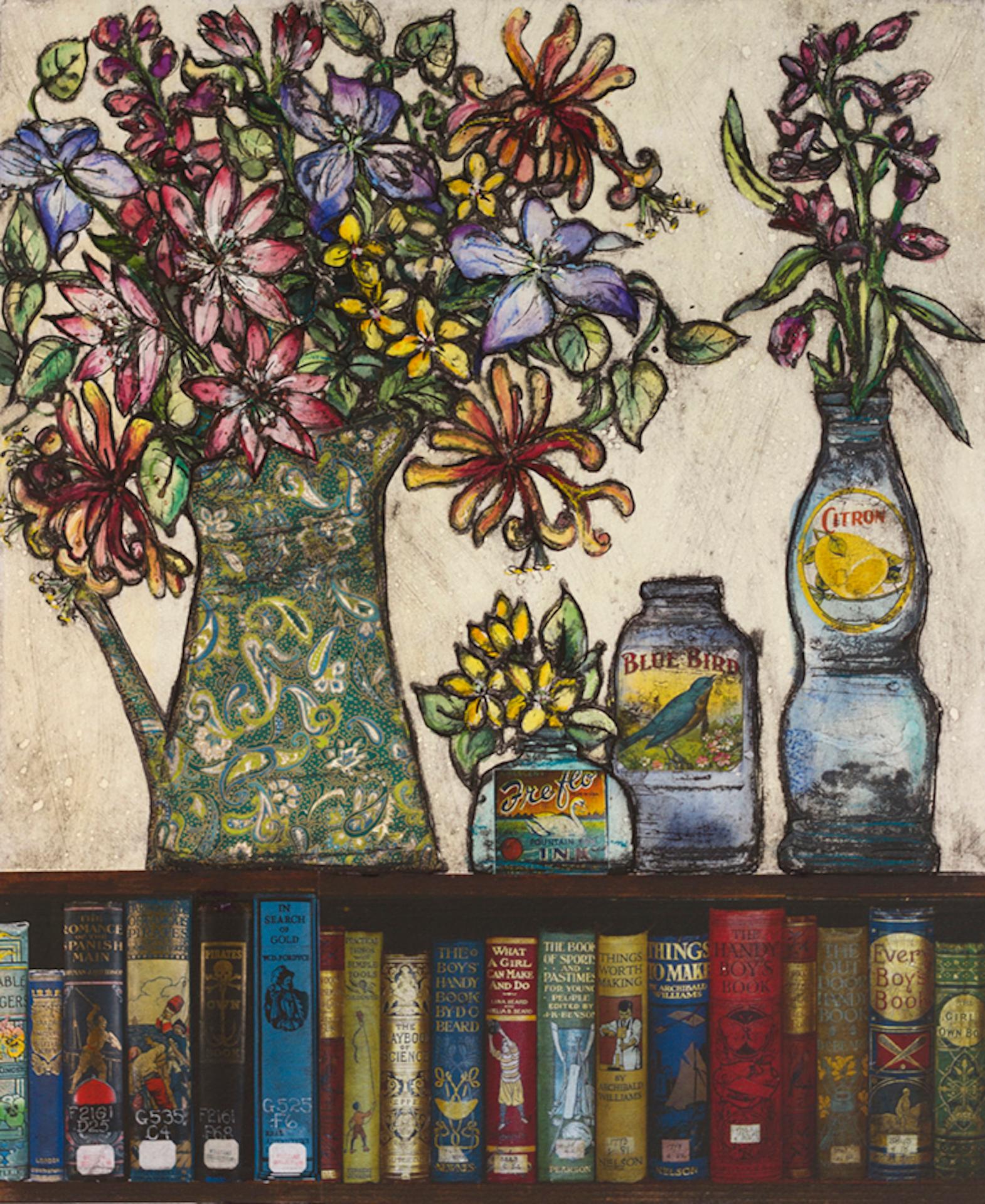 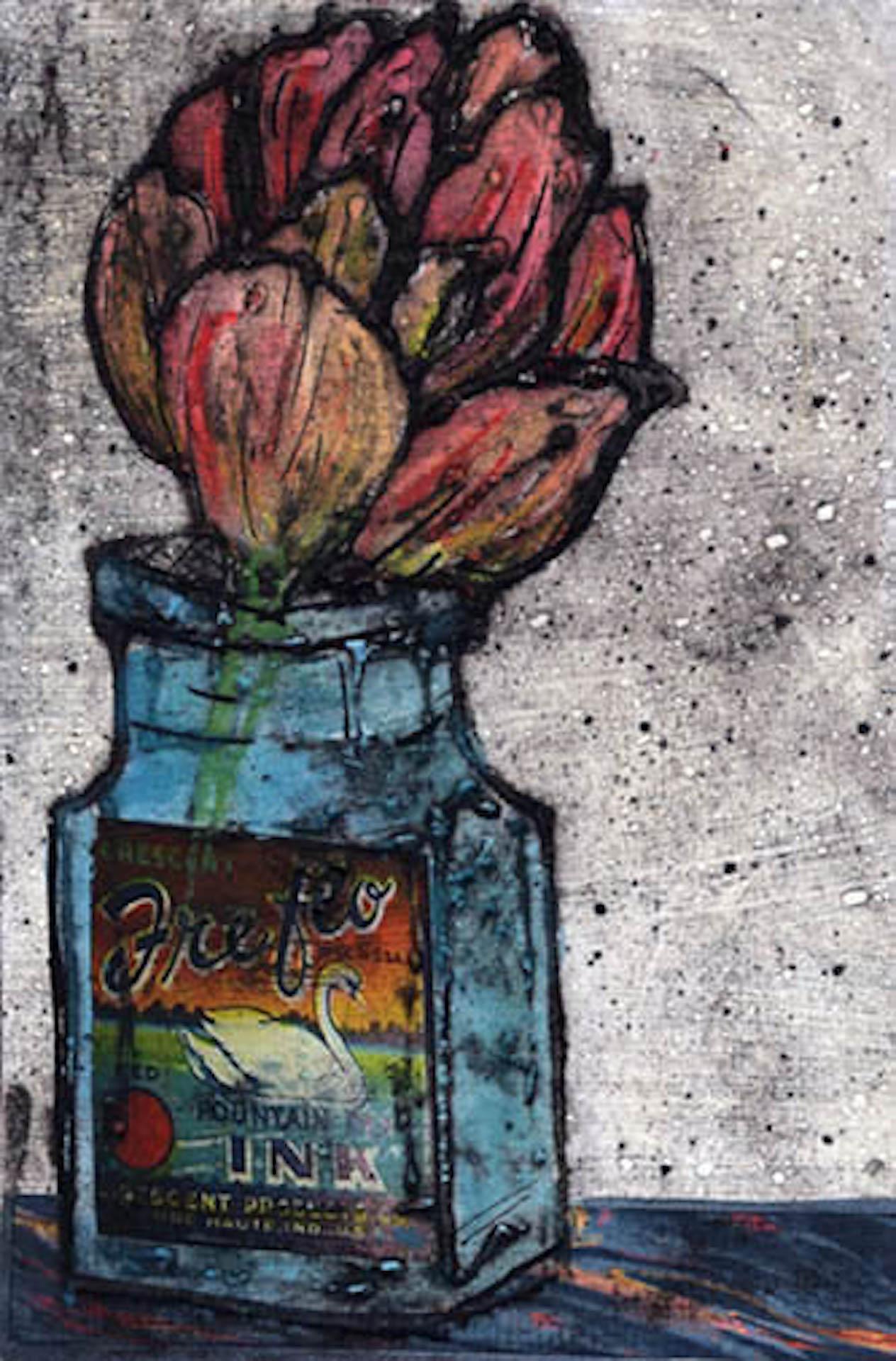 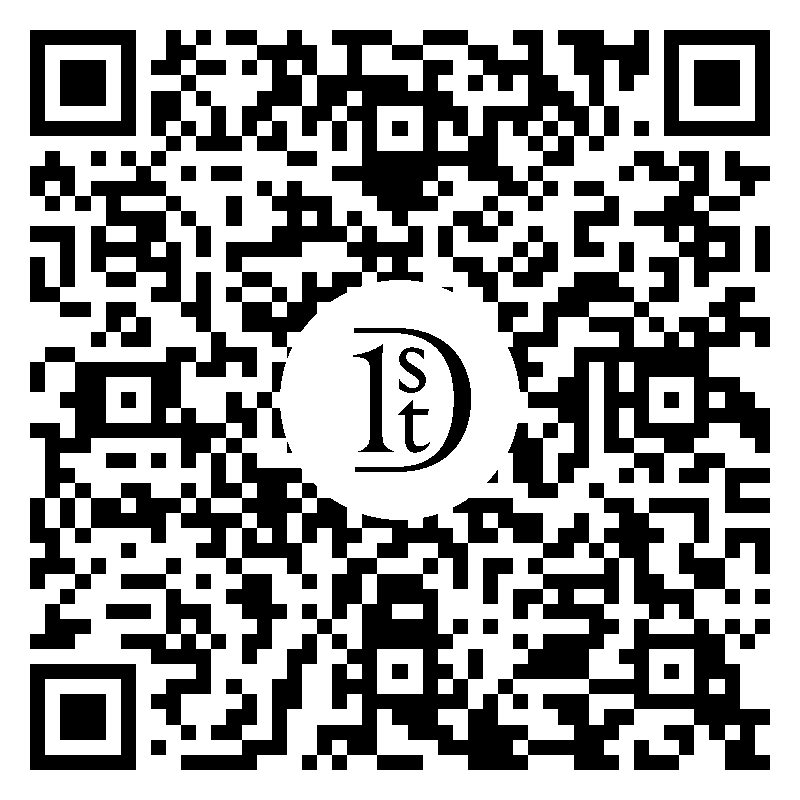 This colorful lithograph was printed in 1953 at the Atelier Mourlot in Paris. Dufy's cheerful work mostly depicts events of the time period, including yachting scenes, sparkling views of the French Riviera, chic parties and musical events. The optimistic, fashionably decorative, elegant and illustrative nature of much of his work was at first less highly valued critically than the works of artists who have addressed over time, collectors and critics came to greatly appreciate his particularly distinctive approach. Certificate of Provenance: Each individual work of art carefully curated by Mourlot Editions comes with a Certificate of Provenance, signed, dated, stamped, and numbered by Eric Mourlot. Stored in a clear protective sleeve accompanying your piece, this certificate guarantees the origin and authenticity of your personal lithograph. 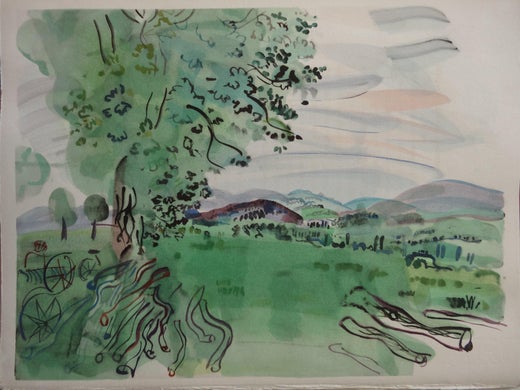 Raoul Dufy was a renowned French Fauvist painter, famous for his colorful, decorative designs. He was born in Le Havre, Normandy, in 1877. Dufy had a simple upbringing, leaving school at 14 to work at a Brazilian coffee-importing company. His formal artistic education began when he was eighteen at Le Havre's École des Beaux-Arts, where he took evening art classes. He continued to paint within the purlieu of Le Havre and was greatly inspired by the Impressionist landscape painters Claude Monet and Camille Pissarro. In 1900, after serving in the military for one year, Dufy won a scholarship to the École Nationale Supérieure des Beaux-Arts in Paris.

Dufy began painting watercolors of the Norman landscapes but was soon widely celebrated for his brightly colored and bold contoured paintings – in dialogue with the Fauvist style. He remained faithful to Fauvism until Paul Cézanne’s work guided him to embrace a subtler aesthetic. This new mode of sobriety saw his work return to a lighter style, which he celebrated through rapid inscription-like drawings over vivid backgrounds of color washes.

The rise of Cubism in Paris during the first two decades of the 20th century influenced him to develop a systematic approach that was later known as stenographics. Using this he experimented with foreshortened perspective, thin washes of paint and skeletal structures. In this style, he portrayed the lavish scenes of the French Riviera, leisureliness of the period, and chic revelries. Dufy was also fascinated by other amusements such as regattas, horse races and concerts and loved to depict the excitement and commotion of the crowds.

Dufy had his first exhibition in 1901 at the Salon des Artistes Français, following a string of exhibitions over the following years. In 1906 he took part in the Cercle de l’Art Moderne Exhibition in Le Havre with artists Georges Braque, Henri Matisse and Henri Charles Manguin. Dufy was given his first retrospective in 1921 at the Galerie Bernheim-Jeune and in 1932 his first painting was accepted into a national collection. He celebrated two large commissions for the 1937 Exposition Internationals des Artes et Techniques dans la Vie Moderne. The most notable of the two was the adornment for the Pavilion of Light and Electricity. He was commissioned with the task to illustrate the history of electricity from the classical era to its current position in 20th century developments. He painted La Fée électricité, a huge fresco which was donated to the Musée d’Art Moderne in 1964. In 1952 he represented France at the 26th Venice Biennale, where he won the Gran Premio. A year later he died aged 75, of polyarthritis, an illness he had been suffering from since 1937.

About the Seller
4.9
Located in New York, NY
Platinum Seller
These expertly vetted sellers are 1stDibs' most experienced sellers and are rated highest by our customers.
Established in 1852
1stDibs seller since 2019
134 sales on 1stDibs
Typical response time: <1 hour

View All
Tragedie, Comédie jean-Louis Barrault, Madeleine Renaud-by Raoul Dufy, 1954-1956
By Raoul Dufy
Located in New York, NY
'My eyes were made to erase all that is ugly." This original color lithograph was created by Raoul Dufy for his friend Jean-Louis Barrault in anticipation of a U.S. theatrical tour...
Category

$624 Sale Price
20% Off
Anémones (colorful bouquet of flowers) by Raoul Dufy - lithographic print
By Raoul Dufy
Located in New York, NY
Lithograph on Arches paper, one of ten Printer's Proof aside from the regular edition. c. 1948. Printed by the Atelier Mourlot. This print is unsigned but annotated as a Printer's pr...
Category

$3,500
Homage to Claude Debussy - Institut Français D'Écosse (after) Raoul Dufy, 1966
By Raoul Dufy
Located in New York, NY
This lithographic poster was designed in 1966 after the late artist Raoul Dufy, for an exhibition of works by Chagall, Dufy, Braque, Matisse and other French artists at the French In...
Category

$335 Sale Price
29% Off
CLOWN A L'OMBELLE
By Nicola Simbari
Located in Aventura, FL
Serigraph on paper. Hand signed and numbered by the artist. Artwork appears to be in excellent condition. Artwork has not been examined outside the matting. Artwork image size: 32 x ...
Category

$825 Sale Price
25% Off
DEUS CLOWNS
By Nicola Simbari
Located in Aventura, FL
Serigraph on paper. Hand signed and numbered by the artist. Artwork appears to be in excellent condition. Artwork has not been examined outside the matting. Artwork image size: 29 x ...
Category