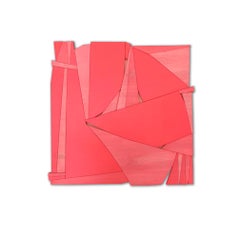 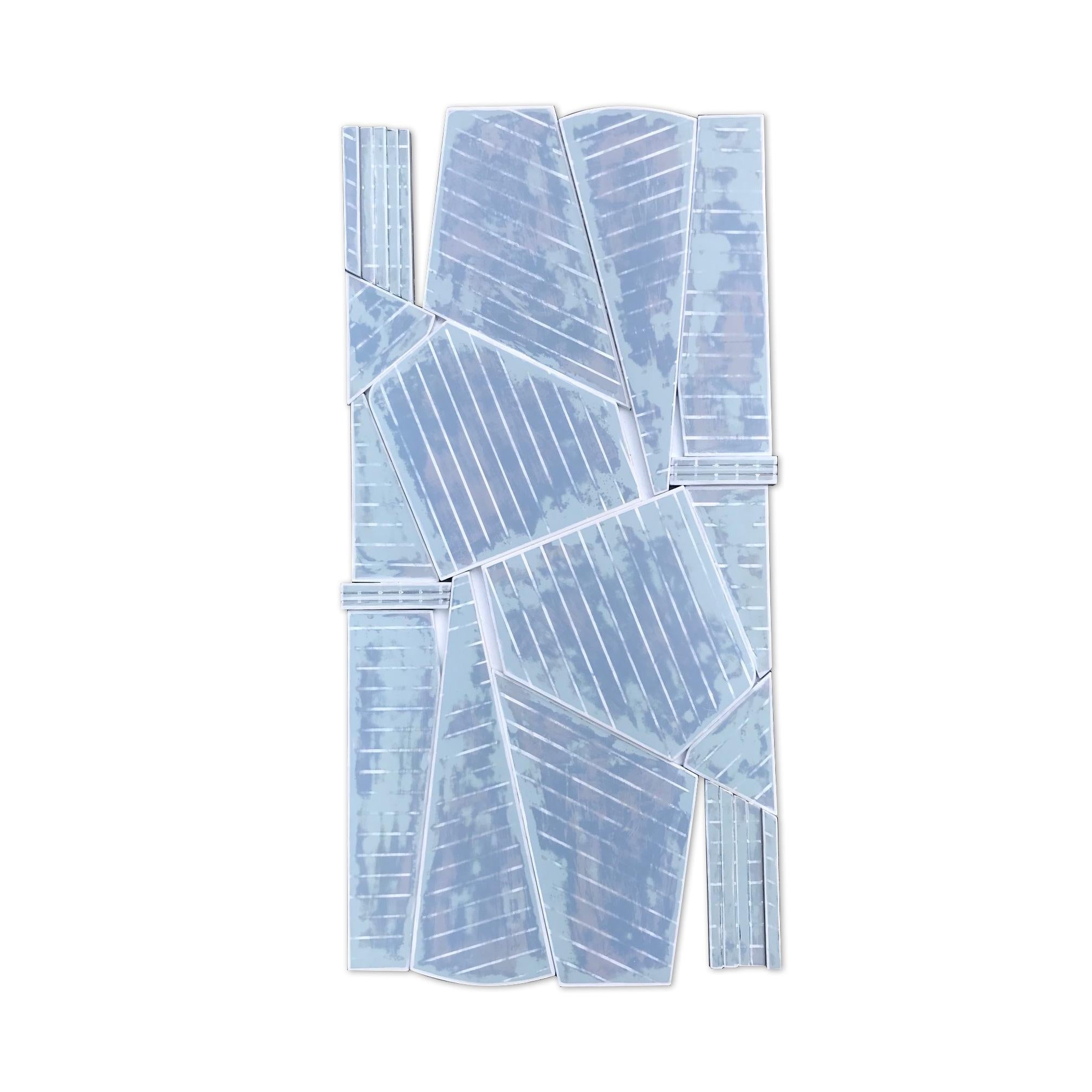 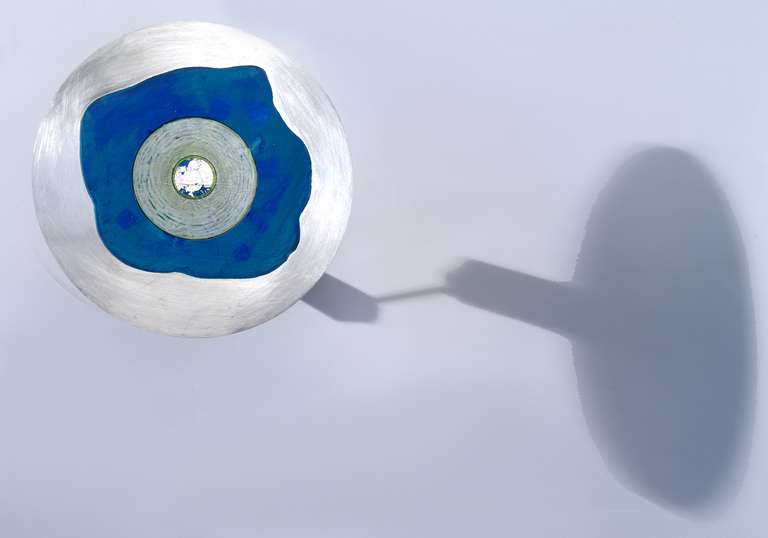 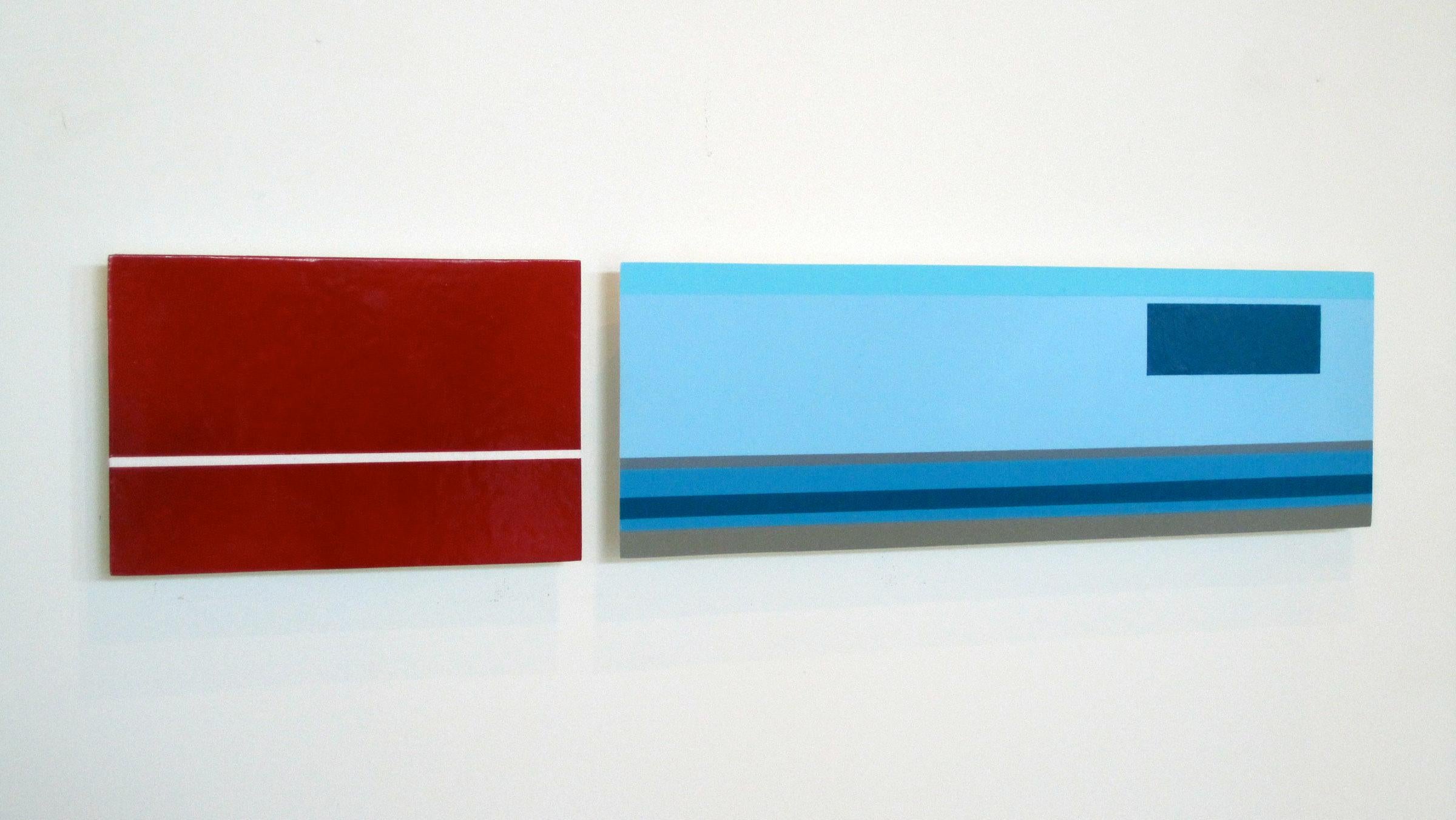 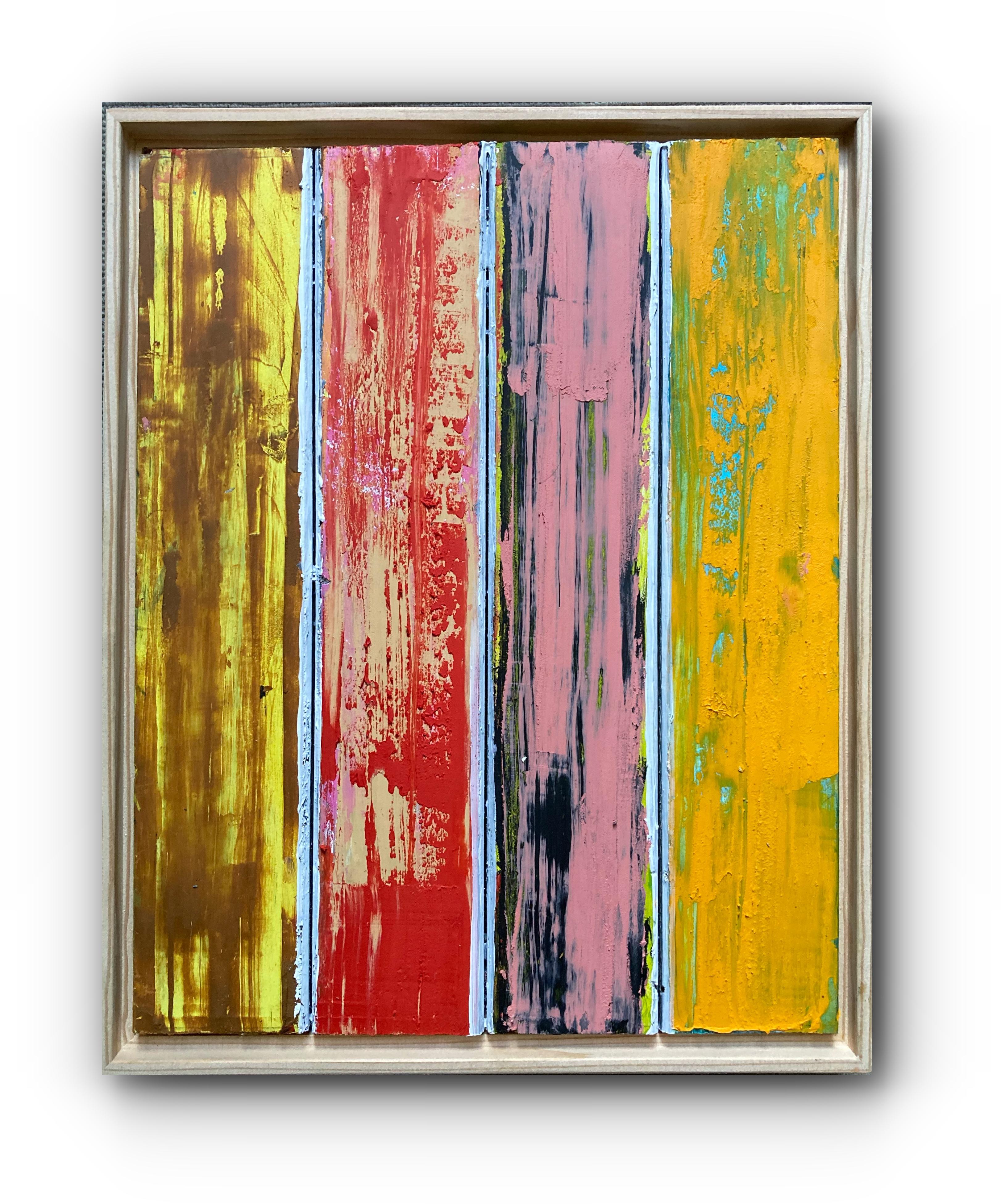 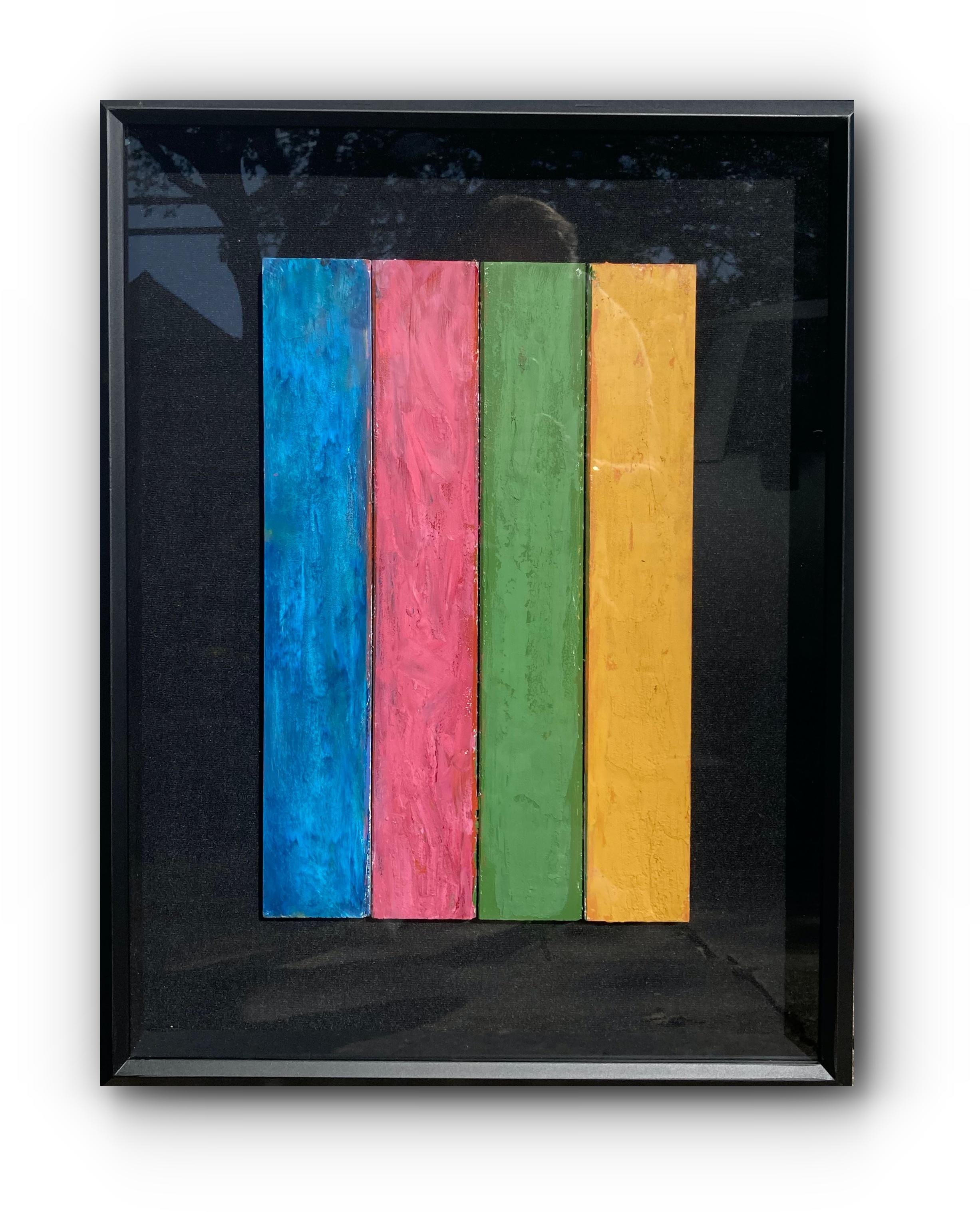 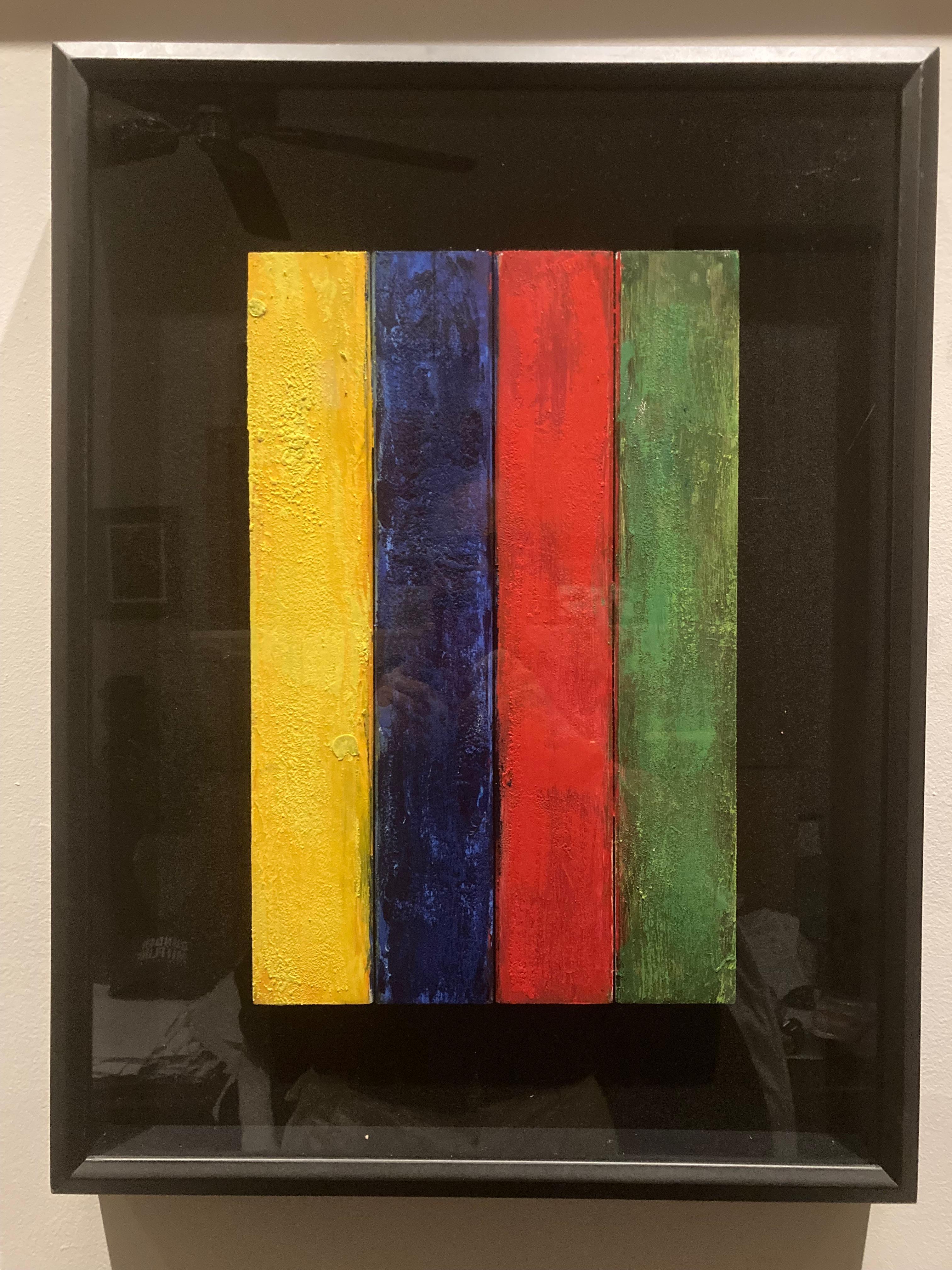 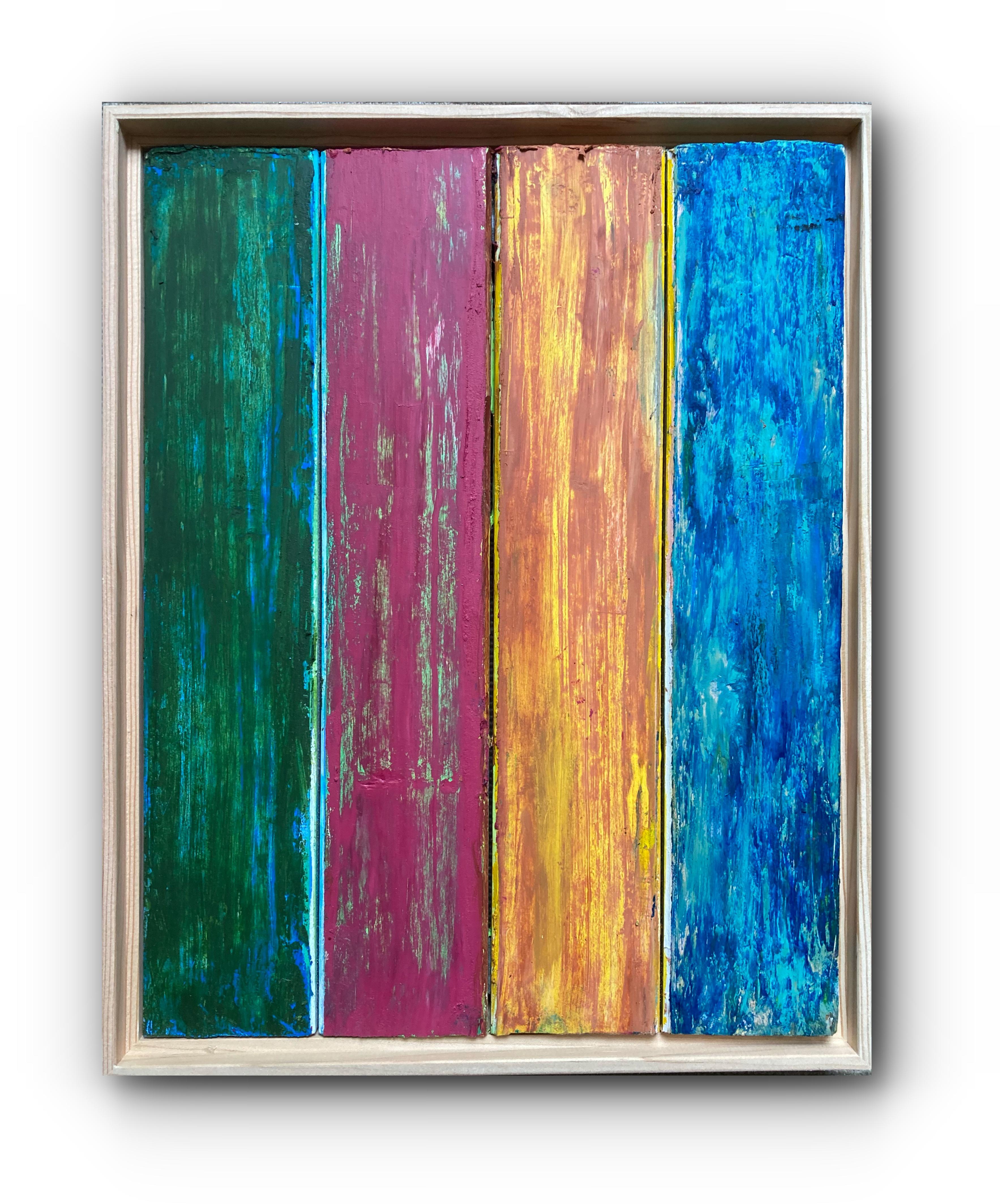 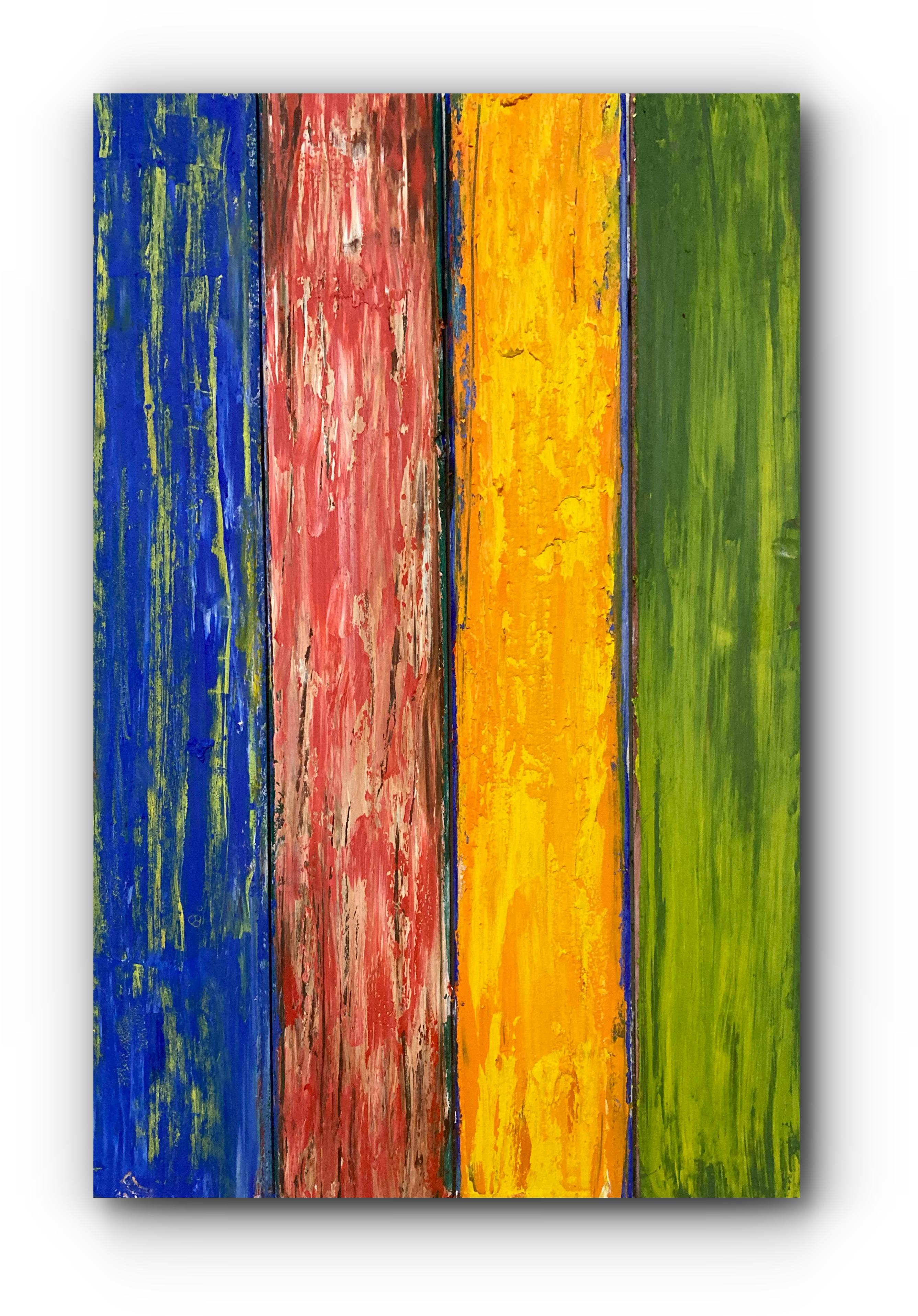 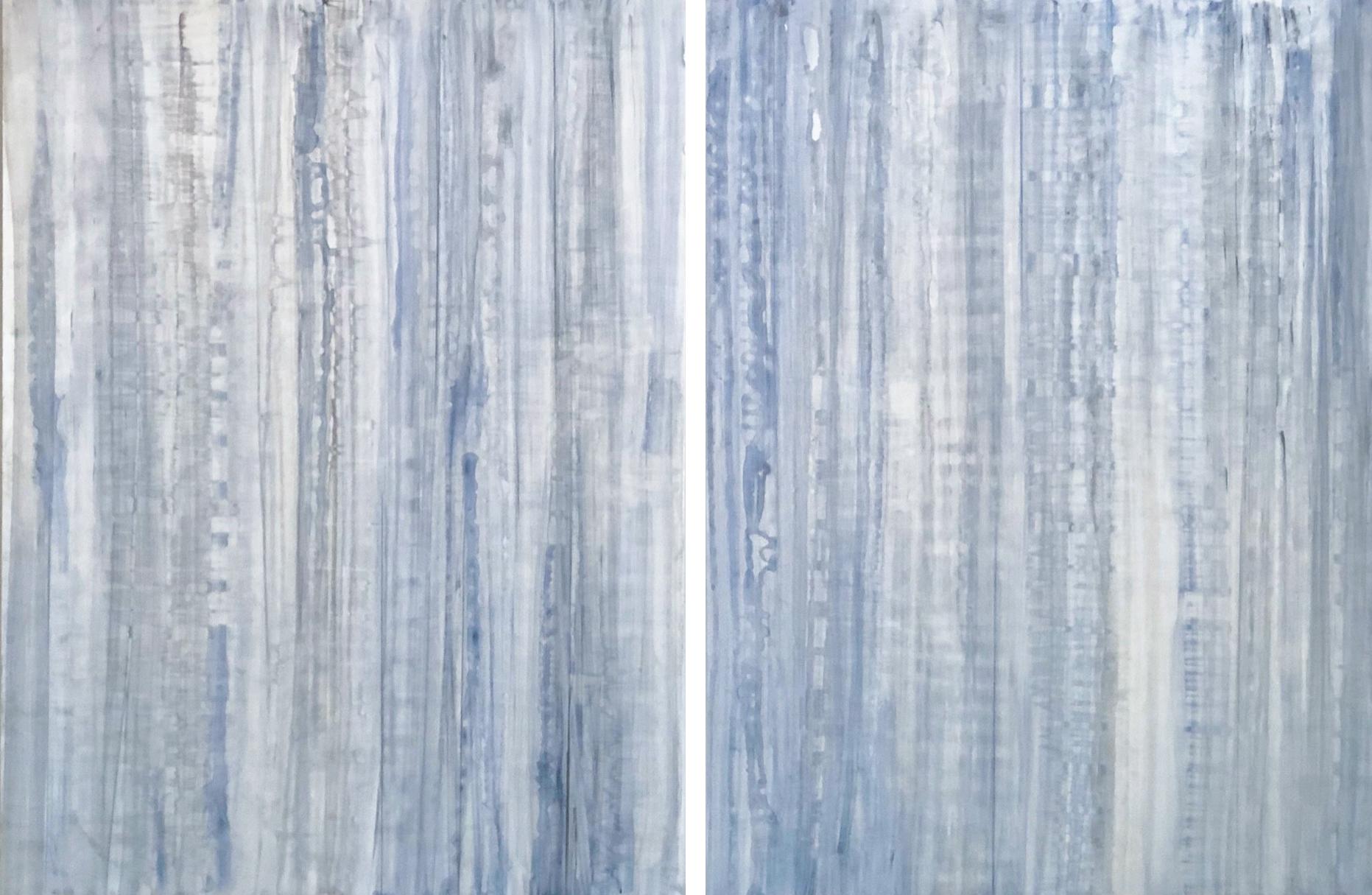 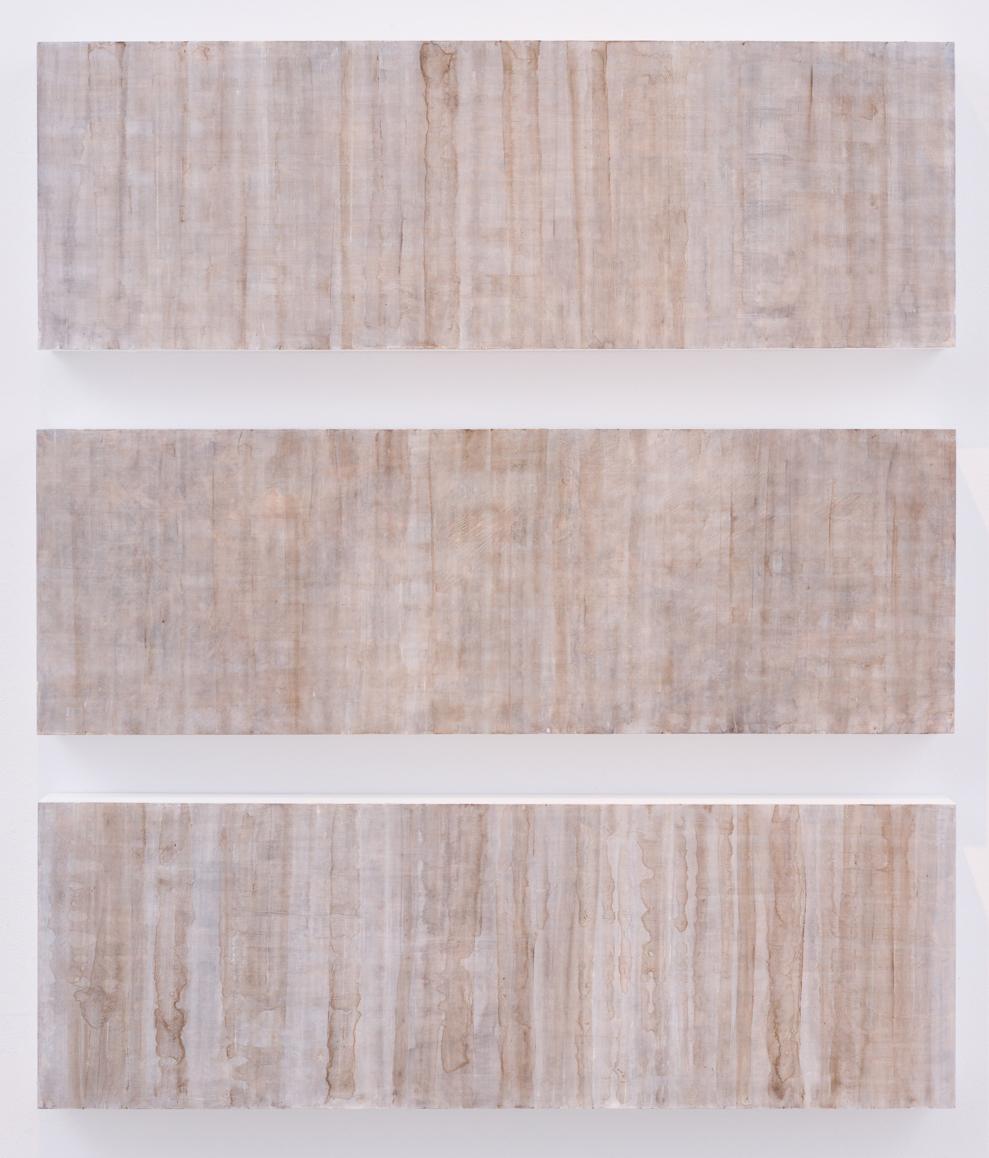 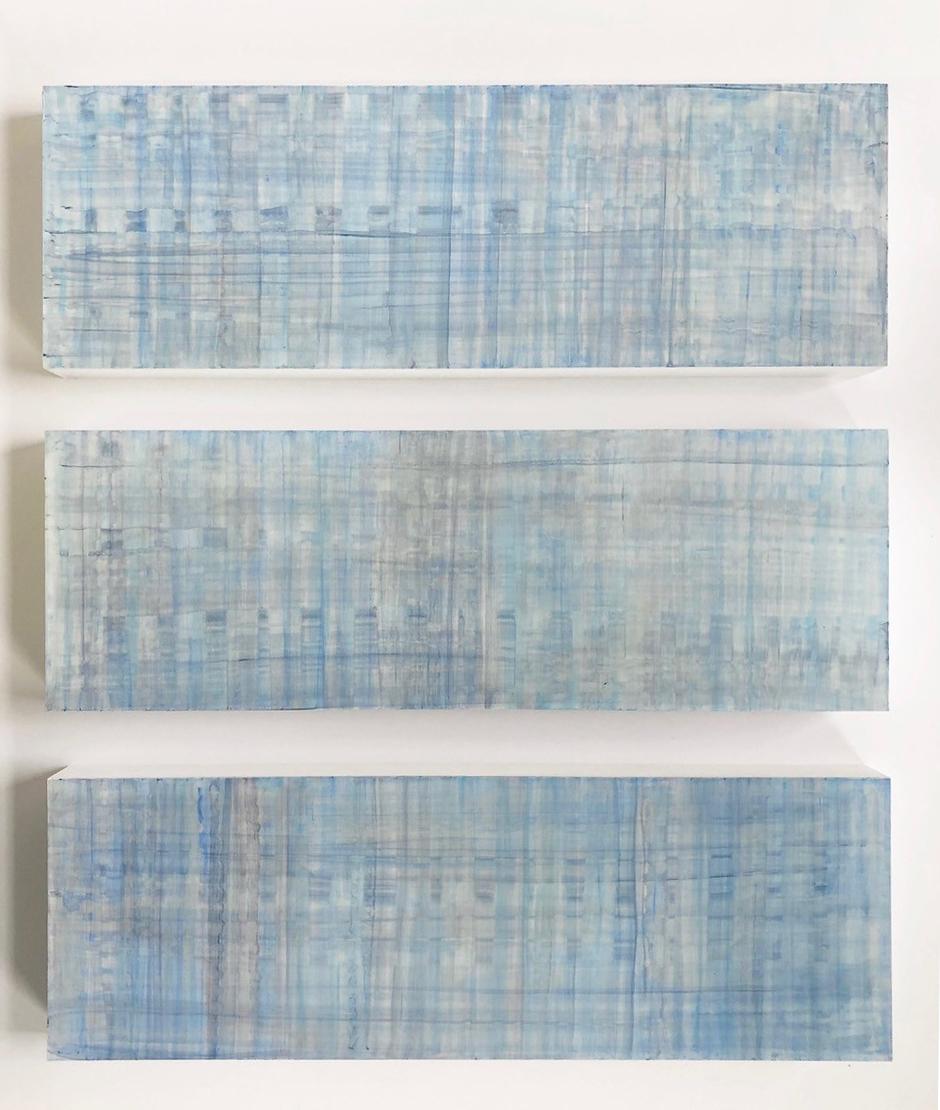 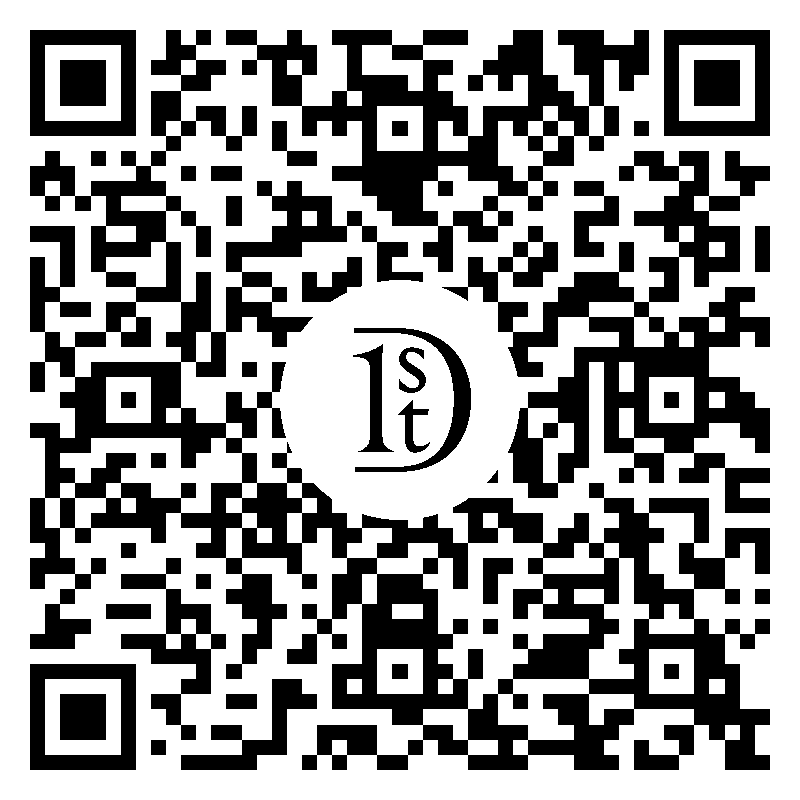 Tiki is a discreet and elegant minimalist contemporary wall sculpture. It is constructed with high-end birch plywood, acrylic washes and completed with a hand waxed finish. The acrylic wash allows the wood grain to show through the paint and creates an almost marble-like appearance as the warm brown wood grain shows through the gradient corals. Tiki is a piece that focuses on the composition, balance, and form by using a limited monochrome color palette. The piece diffuses multiple opacities of orange-red creating a contemplative state or alluding to an upbeat fresh modern vibe. The hints of copper showing through the backing complete the piece. *can be commissionned in any color/size keywords; red, monochrome, wall hanging, assemblage, modern, contemporary sculpture, line, form and color, abstract sculpture, minimalist, bright and vivid colors, smooth surface, wall sculpture and installation, abstract composition, wood, altered and substituted canvas, minimalism and contemporary minimalist, linear forms, geometry, United States, contemporary color fields, Wyatt Kahn, fragmented geometry, focus on joints/connections, modern and contemporary design, modernism, American design About artist: Scott Troxel's modern abstract wall sculptures are complex, jagged and diverse. He crafts modern, bold and graphic work with a sense of Futurist minimalism in some pieces and other times he produces raw, rustic and texture-laden sculptures. Often times these conflicting surfaces can be found juxtaposing each other within the same pieces. The themes of time and age are an overarching theme in his work as he incorporates both new, repurposed and found objects into his pieces. He predominately works in wood as a medium, but also incorporates repurposed materials like plastics, PVC, metals, and other found objects. By simplifying forms around us, focusing on and repurposing old materials, he encourages us to consider the basic and enduring qualities of modern aesthetics. What's modern, what is the definition of new? Can modern be created with old materials? All the while, his work commands lasting attention with its dynamic, architectural and balanced compositions. His work has been exhibited internationally and acquired in private and corporate collections across the United States, Canada, and Europe. Scott has a Bachelor of Arts from Temple University and works out of his studio in New Jersey. 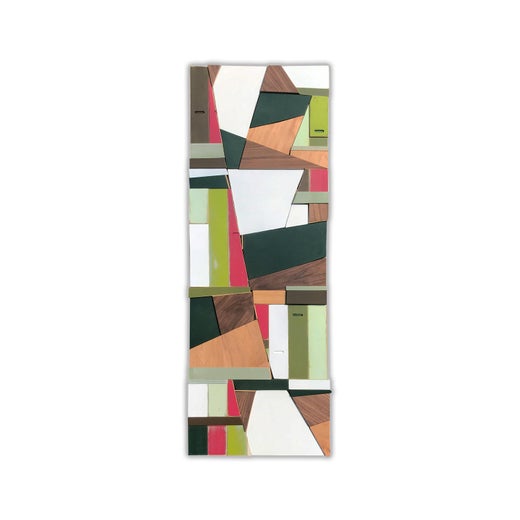 Scott Troxel is an American abstract artist born in 1971 who lives and works in Marmora, New Jersey. From an early age, he became obsessed with modern art, color, and design. He is a painter, sculptor, and wall sculptor. Recently, the majority of his work has been in the form of wood mixed media wall sculpture because of his three-dimensional medium process. Troxel is always exploring materials and processes. Sometimes he uses repurposed and found materials and other times he purchases materials new.

Troxel predominantly works with wood as his base medium, due to its strength, dimension, and organic nature. The inherent texture of wood combined with paint and other man-made materials allows him to explore the concepts of old and young, worn versus new, organic versus man-made, and the past versus the present and future.

Troxel looks to capture a sense of time in his work and often combines the feeling of different eras within a single piece. He sees this as a direct parallel with human life, as we too grow older and interact with other generations, both younger and older. He is also particularly interested in items that were considered technologically or aesthetically advanced, only to be passed on by the consistency and tenacity of time — for example, an airplane boneyard where cutting-edge fighter jets from the 1960s sit in forgotten decay. These structures are still beautiful to look at from a design standpoint, even though they are no longer modern in the sense that time and technology have passed them by.

Troxel is particularly inspired by mid-century modernism, where wood and organic shapes were combined with other materials to suggest a type of futurism, though now they are considered vintage. Time has passed on but these pieces remain in the context of when they were designed. Troxel wants his works to feel this way, somewhat nostalgic, aged, and organic with the feeling that it could also be from a future time.

Find a collection of original Scott Troxel art on 1stDibs.

$1,800
Carmen (Quadryptich Wood Panel Framed Contemporary Abstract Painting)
Located in New Orleans, LA
Artist's Statement: "Around 30 years ago, not long after I had started painting seriously, I was at a one-man exhibition of the great Brice Marden at the Fort Worth Museum of Modern...
Category

$975
The Last Aristocrat (Framed Contemporary Wood Panel Quadriptych Painting)
Located in New Orleans, LA
(Very difficult to photograph inside the case with glass front, so we took one outside the case. A video is included that we hope helps, thought it suffers from reflections on the gl...
Category

$1,500
Flag for a Forgotten People, Framed Contemporary Quadriptych Wood Panel Painting
Located in New Orleans, LA
(Very difficult to photograph inside the case with glass front, so we took a few outside the case. A video is included that we hope helps, thought it suffers from reflections on the ...
Category

$1,500
Florentine (Quadriptych Wood Panel Framed Abstract Painting)
Located in New Orleans, LA
Artist's Statement: "Around 30 years ago, not long after I had started painting seriously, I was at a one-man exhibition of the great Brice Marden at the Fort Worth Museum of Modern...
Category

$975
Balance of Power (Quadriptych Wood Panel Contemporary Abstract Painting)
Located in New Orleans, LA
Artist's Statement: "Around 30 years ago, not long after I had started painting seriously, I was at a one-man exhibition of the great Brice Marden at the Fort Worth Museum of Modern...
Category