Free Shipping
D 0.16 in. Dm 0.63 in.
Victorian Sterling Silver Equestrian Cufflinks
By Glorious Antique Jewelry Collection
Located in Stamford, CT
Polo anyone? The sporting life was well represented in men's gold and silver cufflinks at the turn of the 20th century in both England and America. This pair of cufflinks in sterling...
Category 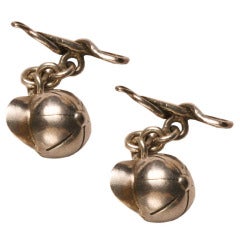 Free Shipping
Antique Scottish Victorian Pebble Silver Cufflinks
Located in Munich, Bavaria
This elegant pair of cufflinks has been made in the last quarter of the nineteenth century in Scotland out of silver with inlayed pebble. Before leaving to their new owner, the silv...
Category

Free Shipping
D 0.4 in. Dm 0.75 in.
Antique Victorian Banded Agate Sardonyx Eye Gold Cufflinks
Located in Munich, Bavaria
These cufflinks have sardonyx cabochons cut to resemble eyes. This semi precious stone in the cut reminiscent of an eye has been in use since ancient times. The eye was credited wit...
Category

D 0.59 in. Dm 0.55 in.
Victorian Antique Gold Cufflinks, 18 Carat Gold Hallmarked 1892, Oval Design
Located in Yorkshire, West Yorkshire
A pair of cufflinks dating from the Victorian era, hallmarked in Birmingham (UK) in 1892. The cufflinks are oval shapes with a slight domed effect to the outer sides and, whilst the...
Category

Free Shipping
Antique Victorian Essex Crystal Gold Shorthorn Bull Cufflink Tie Clip Set
Located in Narberth, PA
Reverse carved crystal was a technique created by cutting pieces of rock quartz crystal into a convex form and then polishing it into a cabochon shape. An image is carved into the fl...
Category

Dm 0.54 in. L 0.67 in.
Antiques Agatha Cufflinks 9 Karat Gold
By Giulia Colussi
Located in Milan, IT
Very nice antiques victorian cufflinks in agata and 9k Gold. All Giulia Colussi jewelry is new and has never been previously owned or worn. Each item will arrive at your door beautif...
Category

Free Shipping
W .75 in. L 1 in.
Antique Diamond and 18K Cufflinks
Located in Aspen, CO
18K antique cufflinks of Medusa with a small diamond in the hair. The diamond weigh is approximately .24 cts. The medusa is about .50 inches across and well executed. The connecti...
Category

Free Shipping
W 0.75 in. L 0.79 in.
Antique Gold Reverse Painting on Crystal Cufflinks
Located in Aspen, CO
Late 19th Century reverse painting under rock crystal, these finely painted dogs brimming with personality was made circa 1890. In both yellow and rose gold, notice the dog bone on...
Category

Free Shipping
Dm .5 in.
Antique Amethyst Diamond and Gold Cufflinks, circa 1900
Located in London, GB
A pair of French, antique, amethyst, diamond and gold cufflinks, set with five, faceted round amethysts and four, small rose-cut diamonds, in a cross formation, in each circular head...
Category

Free Shipping
Antique Victorian Sapphire Diamond Gold Cufflinks
Located in Sale, Cheshire
These fine gents' cufflinks are modelled in 18k gold, and set with vibrant blue sapphires and rose cut diamonds. With a refined elegance, they are certainly not too showy whilst clea...
Category

Dm 1 inch in.
18K Emerald Antique Cufflinks,. circa 1890
Located in Aspen, CO
18K yellow gold and Colombian Emerald back to back cufflinks, circa 1900. The emeralds weigh approximately 12 cts totally. They are a bright medium green and well matched. Circa 1...
Category

Free Shipping
W 0.5 in. L 1 in.
Antique Fishing Cufflinks 18K Yellow Gold & Enamel
Located in Carmel-by-the-Sea, CA
These are a wonderful pair of fine Victorian cufflinks styled with an unusual fishing motif. The condition is excellent, they look as if they are new. The enamel is pristine, and the...
Category

How Much are Antique Victorian Cufflinks?

On average, antique victorian cufflinks at 1stDibs sell for $1,551, while they’re typically $475 on the low end and $15,000 for the highest priced versions of this item.