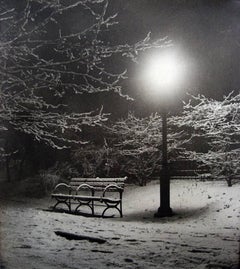 H 8.5 in. W 7.5 in. D 0.1 in.
After the Snow, Central Park
By Yuri Bondarenko
Located in Red Bank, NJ
Russian artist, Yuri Bondarenko, captures the iconic Central Park in New York City after a beautiful snowfall. The sun is trying to find its way out from behind the clouds and the bl...
Category

H 26 in. W 32 in.
Central Park in the Snow
By Mitchell Funk
Located in Miami, FL
Signed and dated on lower right, numbered on verso Edition 3 of 15. Unframed. Other size available,
Category

H 29 in. W 43 in.
Central Park Dairy in the Snow
By Mitchell Funk
Located in Miami, FL
Shipping should be $100 Gingerbread fantasy house in Central Park during a snowstorm with autumn leaves. Signed and dated on lower right, numbered on verso, 4/15 unframed. Other size...
Category

H 40 in. W 60 in.
Central Park: Umbrella in the snow
By Mitchell Funk
Located in Miami, FL
A vast landscape of New York City is accented with a single figure. The striking composition is created when two small areas of color pop off of a white and gray background. The re...
Category

H 44 in. W 55 in. D 2 in.
December Snow, Central Park, New York, NY
By David Burdeny
Located in Montreal, Quebec
Sales can affect the inventory and the shipping time for works. Please contact the seller to confirm availability of works. Ed. of 7 Also available in diasec. David Burdeny was bor...
Category

H 44 in. W 55 in. D 2 in.
Snowfall in Central Park with Dogs in Snow
By Mitchell Funk
Located in Miami, FL
The three-figure formation in the foreground is echoed in the three-building formation in the background. Signed, dated, numbered lower right, recto. Edition 3 of 15, Unframed. Other...
Category

Mitchell Funk
Snowfall in Central Park with Dogs in Snow , 2020

H 40 in. W 60 in.
Central Park in Snow with Dreamy Midtown Skyline
By Mitchell Funk
Located in Miami, FL
Signed, dated, numbered lower right, recto. Edition 3 of 15, Unframed. Other size available Another version of this was on the cover of New York Magazine. Mitchell Funk is a pionee...
Category

H 12.63 in. W 14.5 in. D 1 in.
"By Central Park New York City" Impressionist Bustling City Snow Oil Painting
Located in New York, NY
Impressionist New York City winter landscape scene depicting the City in Snow in a most intimate, yet energetic way. Christopher is known for capturing the beauty and simplicity of a...
Category

H 40 in. W 24 in.
Central Park in the Snow
By Harold Altman
Located in Soquel, CA
Dream like scene of a mother, two children and their dog enjoying a winter day, majestic old tree nearby and pigeons feeding in the foreground by listed artist Harold Altman (America...
Category

You are likely to find exactly the central park snow you’re looking for on 1stDibs, as there is a broad range for sale. In our selection of items, you can find Contemporary examples as well as a Impressionist version. Making the right choice when shopping for a central park snow may mean carefully reviewing examples of this item dating from different eras — you can find an early iteration of this piece from the 20th Century and a newer version made as recently as the 21st Century. When looking for the right central park snow for your space, you can search on 1stDibs by color — popular works were created in bold and neutral palettes with elements of gray, black, brown and beige. There have been many interesting central park snow examples over the years, but those made by Gerald Berghammer, Mitchell Funk, David Burdeny, Bogomir Bogdanovic and John Albok are often thought to be among the most thought-provoking. Frequently made by artists working in paper, archival pigment print and pigment print, these artworks are unique and have attracted attention over the years. A large central park snow can prove too dominant for some spaces — a smaller central park snow, measuring 7.75 high and 7.5 wide, may better suit your needs.

How Much is a Central Park Snow?

The price for an artwork of this kind can differ depending upon size, time period and other attributes — a central park snow in our inventory may begin at $450 and can go as high as $14,500, while the average can fetch as much as $3,200.