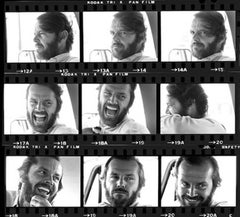 H 40 in. W 28 in.
Fireflies Contact Sheet
By Keith Carter b.1948
Located in Dallas, TX
Edition of 20 Signed, titled, dated and numbered. Paper size: 11 x 14 in., Image size: 9 x 11 in. Keith Carter is an American photographer who is known for his dreamlike black and w...
Category

H 66.9 in. W 52.8 in. D 0.1 in.
Vintage Contact Sheet Jaffa, Jerusalem circa 1940s
Located in Bal Harbour, FL
A rare British Mandate Palestine, early state of Israel era, Black and White photography contact sheet. these were from a photo collection that included Robert Capa and other Magnum ...
Category

H 10 in. W 8 in.
Bob Fosse, Contact Sheet
By Harry Benson
Located in Greenwich, CT
Twelve black and white photographs of Bob Fosse, arranged in a grid on a single sheet.
Category

H 30 in. W 40 in.
Jean Shrimpton, Contact Sheet
By William Helburn
Located in New York, NY
This photograph is an edition of 50. See below for other editions available. All editions are signed by the photographer. Larger sizes may be available upon request.
Category

H 20 in. W 16 in.
Vintage Contact Sheet Palestine, Israel circa 1940s
Located in Bal Harbour, FL
A rare British Mandate Palestine, early state of Israel era, Black and White photography contact sheet. these were from a photo collection that included Robert Capa and other Magnum ...
Category

H 10 in. W 8 in.
Muhammad Ali Contact Sheet
By Al Satterwhite
Located in Dallas, TX
Edition of 25 Signed, titled, dated and numbered. Acclaimed photographer, Al Satterwhite, has photographed some of the most significant athletes in sports, including late Titan, Muh...
Category

H 36 in. W 24 in. D 0.1 in.
Muhammad Ali Contact Sheet
By Al Satterwhite
Located in Dallas, TX
AP Signed and numbered by artist. Acclaimed photographer, Al Satterwhite, has photographed some of the most significant athletes in sports, including late Titan, Muhammad Ali, train...
Category

H 46.5 in. W 41.75 in. D 2.25 in.
Vintage Contact Sheet Jaffa, Tel Aviv circa 1940s
Located in Bal Harbour, FL
A rare British Mandate Palestine, early state of Israel era, Black and White photography contact sheet. these were from a photo collection that included Robert Capa and other Magnum ...
Category

H 10 in. W 8 in.
Lacy Contact Sheet (Edition 2/50)
By Baron Wolman
Located in Beverly Hills, CA
In 1969, Rolling Stone Magazine, then barely a year old, published a scandalous issue on the backstage proclivities of rock stars, and the women who sought them out. For the first-ti...
Category

H 40 in. W 30 in.
Faye Dunaway Oscar Contact Sheet
By Terry O'Neill
Located in Beverly Hills, CA
Other sizes available Actress Faye Dunaway laying at the Beverly Hills hotel with her academy award, all of the photos from the coveted "Oscar Shoot". British photographer, Terry ...
Category

H 40 in. W 30 in.
Movie Star contact sheet, Contemporary, Portrait, Photography, Celebrity
By David Drebin
Located in Munich, DE
Edition 9 The contact sheet of the sold out picture "Movie Star", a young girl is standing at a counter with the head on the plate. Internationally-renowned and New York City-based...
Category

Alfred Hitchcock with Goose Contact Sheet
By Albert Watson
Located in Vienna, AT
Portrait of the iconic Hollywood film director in suit holding a plucked goose. PREISS FINE ARTS is one of the world’s leading galleries for fine art photography representing the mo...
Category

Beatles Times Nine (Contact Sheet) by Harry Benson
By Harry Benson
Located in Cleveland, OH
Harry Benson was born near Glasgow, Scotland. The photographer was assigned to travel with the Beatles on their first American tour in 1964. His iconic photograph shows the band in a...
Category

H 30 in. W 30 in.
Daniel Craig Contact Sheet (Limited Edition of 25) - Celebrity Photography
Located in New York, NY
This is a 2002 contact sheet (a positive print of all the negative images from a roll of 35mm film or medium format film) of youthful-looking Daniel Craig, taken by British celebrity...
Category

Daniel Craig Contact Sheet (Limited Edition of 25) - 30x40 In Celebrity Print
Located in New York, NY
This is a 2002 contact sheet (a positive print of all the negative images from a roll of 35mm film or medium format film) of youthful-looking Daniel Craig, taken by British celebrity...
Category

Bob Dylan by Don Hunstein - Rockarchive, Music, Rock, Pop, Art, Contact sheet
By Don Hunstein
Located in Brighton, GB
Please be aware that the US recently imposed an import duty on photographs printed in the last 20 years which may apply if you are purchasing and importing this to the US. All print...
Category

H 11.7 in. W 16.5 in.
Andy Warhol Contact Sheet
By Greg Gorman
Located in Palm Desert, CA
For over four decades Greg Gorman has evolved a unique and discerning style through his portraits of celebrities, explorations into human nature and the male and female nude. This An...
Category

H 37 in. W 24 in.
Chanel Beauty (Contact Sheet), 1987
By Horst P. Horst
Located in Lucerne, CH
Signature:signed and certified by the estate of the artist Provenance: Horst Estate
Category

H 16 in. W 20 in. D 0.1 in.
Muhammad Ali Boxing Champ Training - Archival Black and White Contact Sheet
By Allan Tannenbaum
Located in New York, NY
Heavyweight World Champion Boxer Muhammad Ali trains at his Deer Lake, Pennsylvania camp in 1978. This is a composite contact sheet made from the best negatives of the day. Signed an...
Category

H 44 in. W 66 in.
Christine Keeler - 1963 - Contact Sheet - Nude Sitting
By Brian Duffy
Located in St Leonards on Sea, GB
Christine Keeler First nude photographic sitting in 1964, which was for the reknown photographer Brian Duffy, in London. This print shows a series of poses from that shoot 14 x 18 i...
Category

On 1stDibs, you can find the most appropriate contact sheet for your needs in our varied inventory. In our selection of items, you can find Contemporary examples as well as a Modern version. If you’re looking for a contact sheet from a specific time period, our collection is diverse and broad-ranging, and you’ll find at least one that dates back to the 20th Century while another version may have been produced as recently as the 21st Century. If you’re looking to add a contact sheet to create new energy in an otherwise neutral space in your home, you can find a work on 1stDibs that features elements of black, gray, beige, purple and more. Creating a contact sheet has been a part of the legacy of many artists, but those crafted by Greg Gorman, Christopher Makos, Terry O'Neill, Albert Watson and Harry Benson are consistently popular. Frequently made by artists working in pigment print, archival pigment print and silver gelatin print, these artworks are unique and have attracted attention over the years. A large contact sheet can prove too dominant for some spaces — a smaller contact sheet, measuring 10 high and 8 wide, may better suit your needs.

A contact sheet can differ in price owing to various characteristics — the average selling price for items in our inventory is $2,150, while the lowest priced sells for $325 and the highest can go for as much as $147,388.