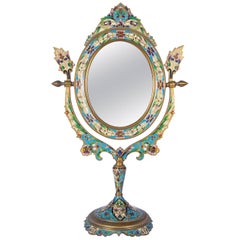 H 9.5 in. Dm 6.5 in.
Vintage Michel Gibault Iron Enamel Mirror France
Located in Munich, DE
This spectacular wall mirror was designed by Michel Gibault, France, circa 1980. It is made out of gilt and enameled iron.
Category

H 10.25 in. Dm 7.5 in.
Antique French Ormolu and Limoges Enamel Table Mirror F.Bienvue, 19th Century
Located in London, GB
This is an impressive and highly decorative French gilt bronze and Limoges enamel table mirro, Signed, F.Bienvue, Limoges and circa 1880 in date. The enameled portrait roundel on a ...
Category

H 9.45 in. W 5.52 in. D 4.34 in.
19th Century French Cloisonne Enamel and Gilt Handheld Crystal Mirror
Located in Pully, CH
19th century authentic exquisitely detailed handheld crystal mirror that is decorated with cloisonné enamel with lots of flowers, a bird and a butterfly. France, circa 1880.
Category

H 9.06 in. W 3.55 in. D 0.4 in.
Antique Neoclassical French Brass Enamel Wall Mirror with Candle Sconces, 1890
Located in Portland, OR
Antique neoclassical French brass wall mirror with candle sconces, circa 1890. The mirror having a pierced floral brass frame and mounted with a mask of the Roman God Bacchus, the fr...
Category

1950 French Work, Little Mirror in Enameled Plaster in the style of Serge Roche

H 10.44 in. W 10.24 in. D 0.79 in.
Round Ceramic Mirror by Mithé Espelt, France, circa 1970
By Mithé Espelt
Located in Paris, Ile-de-France
A round ceramic wall mirror, 2 birds facing each other and 2 others being back to back. Enameled in shades of ivory, light pink and gold. Original green felt at the back, in very g...
Category

Round Ceramic Mirror by Mithé Espelt, France, circa 1970

H 0.6 in. Dm 10.52 in.
Ceramic "Flower" Mirror by Mithé Espelt
By Mithé Espelt
Located in Paris, Ile-de-France
Ceramic mirror, figuring a 10 petals flower and 2 leaves, enameled in bright orange, red and green. Mithé Espelt, - Lunel (South of France) 1970 Green felt at the back of the mir...
Category

H 13.39 in. W 12.21 in. D 0.6 in.
Mirror or Picture-Frame by Mathieu Matégot
By Mathieu Matégot
Located in Los Angeles, CA
Made in the 1950s of enameled steel perforated in a pattern with Matégot's distinctive trefoil motif, this piece can serve either as a picture frame or as a chic wall-mirror. In comp...
Category

Mirror or Picture-Frame by Mathieu Matégot

H 15.3 in. W 11.7 in. D 1.5 in.
Pair Round Midcentury Wall Mirrors Brass Black Stretched Metal 1955 Mategot Biny
By Pierre Guariche, Mathieu Matégot, Jacques Biny
Located in Nierstein am Rhein, DE
Rare pair of round midcentury wall mirrors which are made in the style of Jacques Biny, Mathieu Mategot or Pierre Guariche, France or Italy circa 1955. They are made of black lacquer...
Category

H 0.79 in. Dm 13.78 in.
Ceramic Round Mirror by Roger Capron, Vallauris
By Roger Capron
Located in Paris, FR
Round mirror surrounded by a lacquered rim with a frame made from ceramic tiles that are flamed or partially glazed with floral imprint decorations. Marked Capron Vallauris France, ...
Category

H 57.88 in. W 33.08 in. D 1.97 in.
Gilt Bronze with Enamel French Hand Mirror
Located in Lambertville, NJ
Wonderful gilt bronze with blue and white enamel hand mirror. Marked France on one side of the handle and New York on the other. Measures: 10” by 5 1/4” Age appropriate ware to frame...
Category

H 17 in. W 12 in. D 13 in.
Antique French Enamel and Bronze Compact Powder Case Pill Box Mirror Star Roses
Located in Dayton, OH
Antique enamel on copper compact mirror/power case. Made in France, the edge of the bronze base shows a leaf motif and the enameled top is decorated with a swirling blue five pointed...
Category

H 8.67 in. W 7.09 in. D 0.79 in.
"Stomping Grapes," Art Deco Etched/Enameled Mirrored Panel with Winemaking Scene
Located in Philadelphia, PA
Remarkable in its size, ambition and complexity, this large Art Deco mirrored panel depicts a grape stomping scene at its center, surrounded by a farm scene full of life, executed in...
Category

H 65 in. W 36.50 in. D 1 in.
French Enameled Mirror
Located in Los Angeles, CA
Amazing enameled mirror hand painted in vibrant colors. Oval shaped Iron with brass hardware and detail. Purchased in France and appears to be made by an artist.
Category

How Much is a French Enamel Mirror?

A French enamel mirror can differ in price owing to various characteristics — the average selling price 1stDibs is $2,498, while the lowest priced sells for $90 and the highest can go for as much as $168,500.