H 20 in. W 16 in.
Mr. Brainwash, Balloon Girl (Unique Painting), 2020
By Mr. Brainwash
Located in New York, NY
The ‘Balloon Girl’ by french contemporary artist Mr. Brainwash was created in 2020 in his signature style of layering paint, stencil, and mixed media on paper to create a cultural co...
Category

H 30 in. W 22 in.
Balloon Girl by Mr. Brainwash
By Mr. Brainwash
Located in Cleveland, OH
Mr. Brainwash, the pseudonym for Thierry Guetta, is an internationally-known Pop Artist and videographer whose street art and Contemporary pieces are highly valued by collectors. Mr....
Category 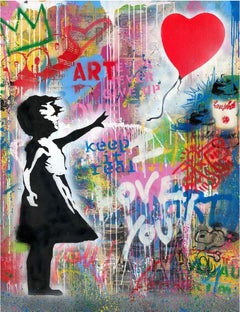 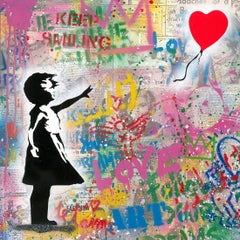 H 36 in. W 28 in. D 2 in.
Balloon Girl
By Mr Brainwash
Located in Fort Lauderdale, FL
Silkscreen and mixed media on paper
Category

H 29.93 in. W 22.45 in.
Balloon Girl by Mr. Brainwash
By Mr. Brainwash
Located in Cleveland, OH
Mr. Brainwash, the pseudonym for Thierry Guetta, is an internationally-known Pop Artist and videographer whose street art and Contemporary pieces are highly valued by collectors. Mr....
Category

On 1stDibs, you can find the most appropriate mr brainwash balloon for your needs in our varied inventory. Find Street Art versions now, or shop for Street Art creations for a more modern example of these cherished works. If you’re looking to add a mr brainwash balloon to create new energy in an otherwise neutral space in your home, you can find a work on 1stDibs that features elements of beige, brown, gray, pink and more. Finding an appealing mr brainwash balloon — no matter the origin — is easy, but Mr. Brainwash and Mr Brainwash each produced popular versions that are worth a look. These artworks were handmade with extraordinary care, with artists most often working in mixed media, paint and screen print. A large mr brainwash balloon can be an attractive addition to some spaces, while smaller examples are available — approximately spanning 17 high and 16 wide — and may be better suited to a more modest living area.

How Much is a Mr Brainwash Balloon?

Fellow street artist Alec Monopoly has said that he considers Mr. Brainwash a mentor. He is perhaps best known for his role in Banksy’s documentary Exit Through the Gift Shop (2010), which features Mr. Brainwash’s rise to success in the street art scene. Much like Keith Haring, Jean-Michel Basquiat and Andy Warhol, Mr. Brainwash's popularity in Pop art happened almost overnight after the premiere of the film, in which he remarks, “Banksy captured me becoming an artist. In the end, I became his biggest work of art.”